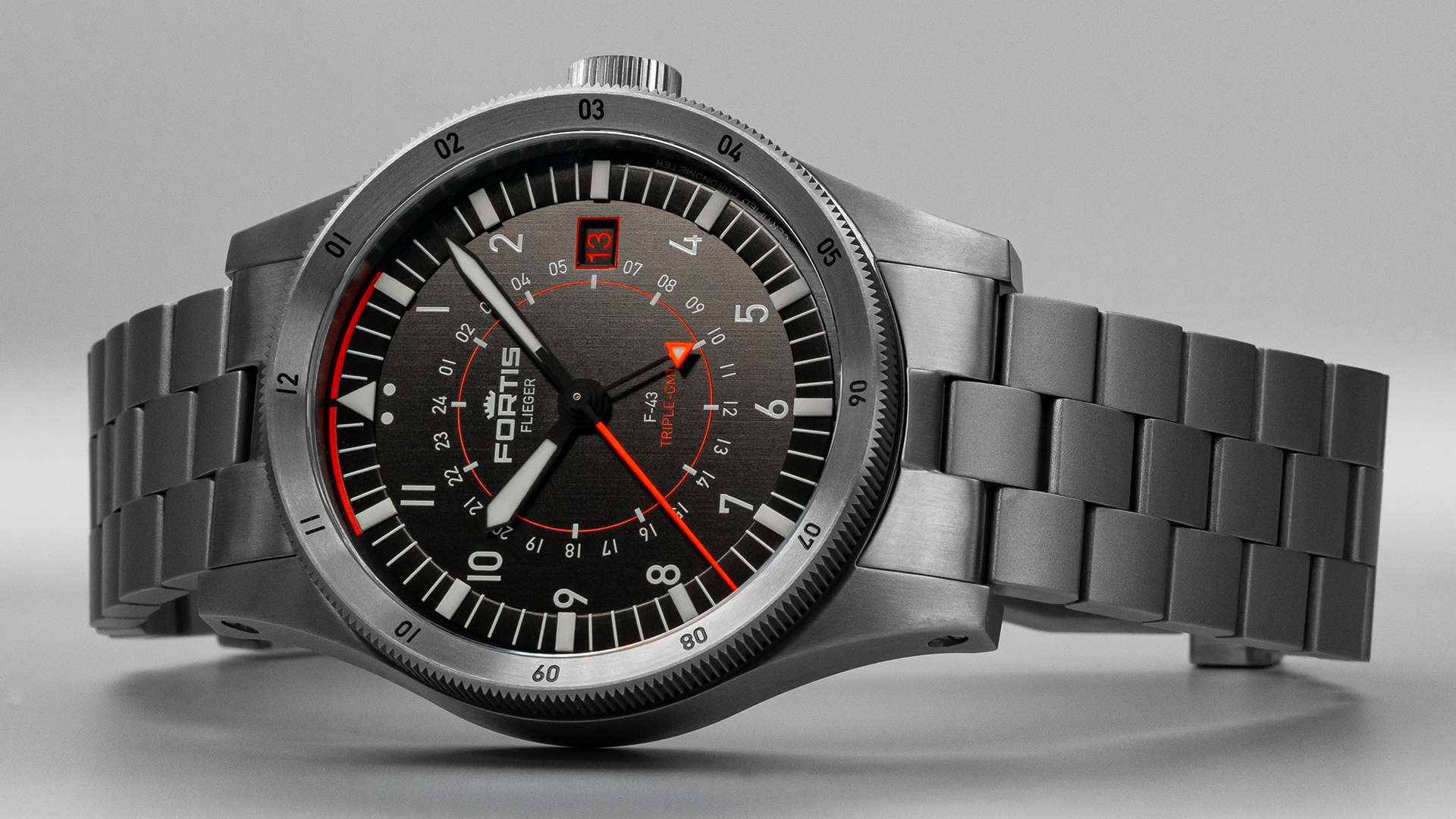 Over the past several months, Swiss tool watch specialist Fortis has dramatically revamped its cornerstone Flieger line of pilot watches. In incremental announcements, the brand has released new variations from simple three handers to chronographs, and October 2020 marks the end of this gradual updating cycle. It seems as though Fortis has saved the most substantial update for last, however, with a new GMT pilot variant featuring an all new COSC chronometer certified automatic movement from Tudor-aligned movement manufacturer Kenissi. While the new Fortis Flieger F-43 Triple-GMT bears more than a passing resemblance to its stablemates, this new model makes a handful of substantial technical changes. 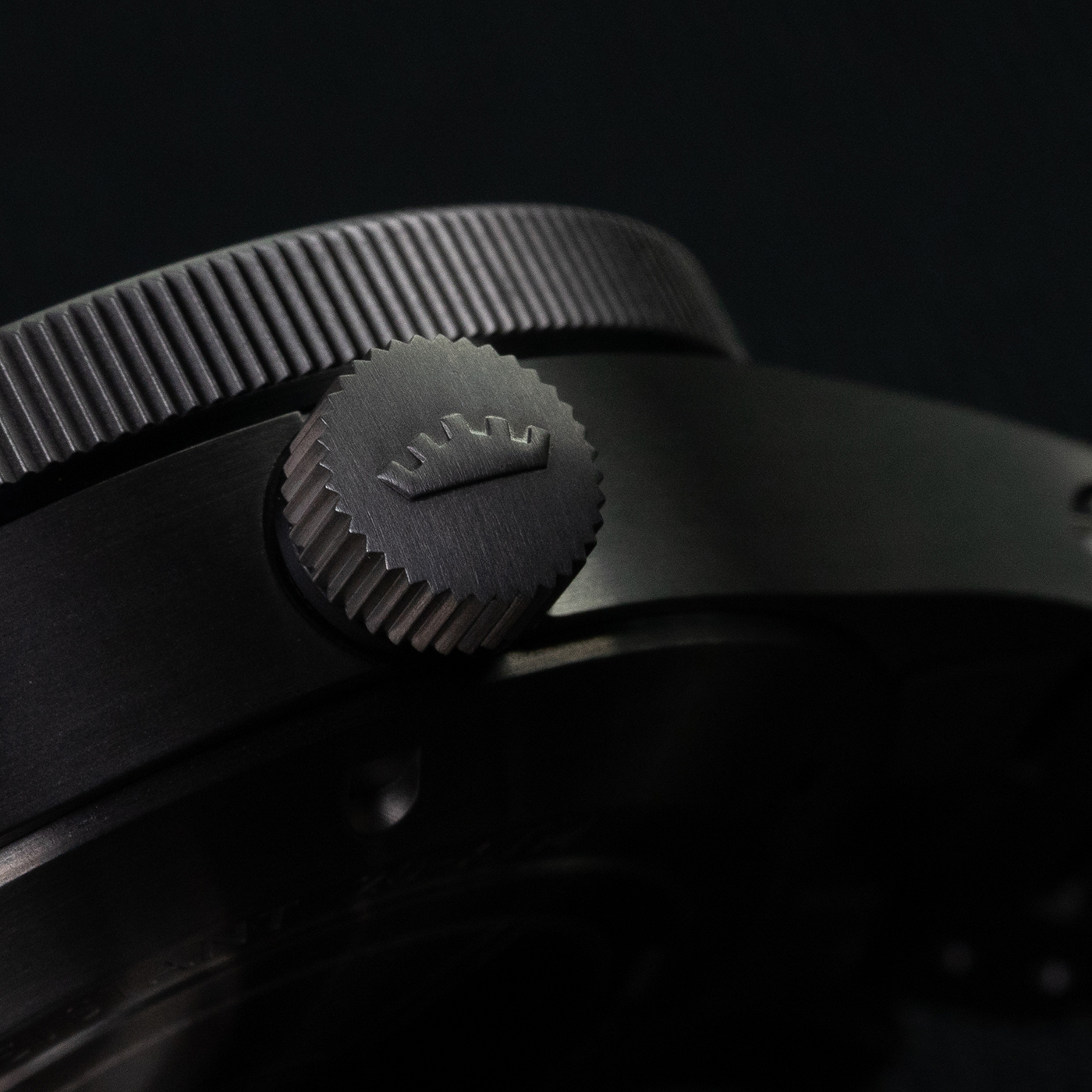 The 43mm case of the Fortis Flieger F-43 Triple-GMT follows the same utilitarian, almost harsh form as the other members of the Flieger lineup but renders this sporty tool watch shape in titanium rather than stainless steel. The darker tone looks to complement the functional, angular shape well in initial images, particularly the dramatic inward sloping bezel insert. Other than the material change, elements of the rest of the Flieger line remain intact in this case design, from the athletic squared-off lugs to the oversized screwdown pillbox crown and engraved caseback. Like its stablemates, the Flieger F-43 Triple-GMT boasts a respectable 200 meters of water resistance. 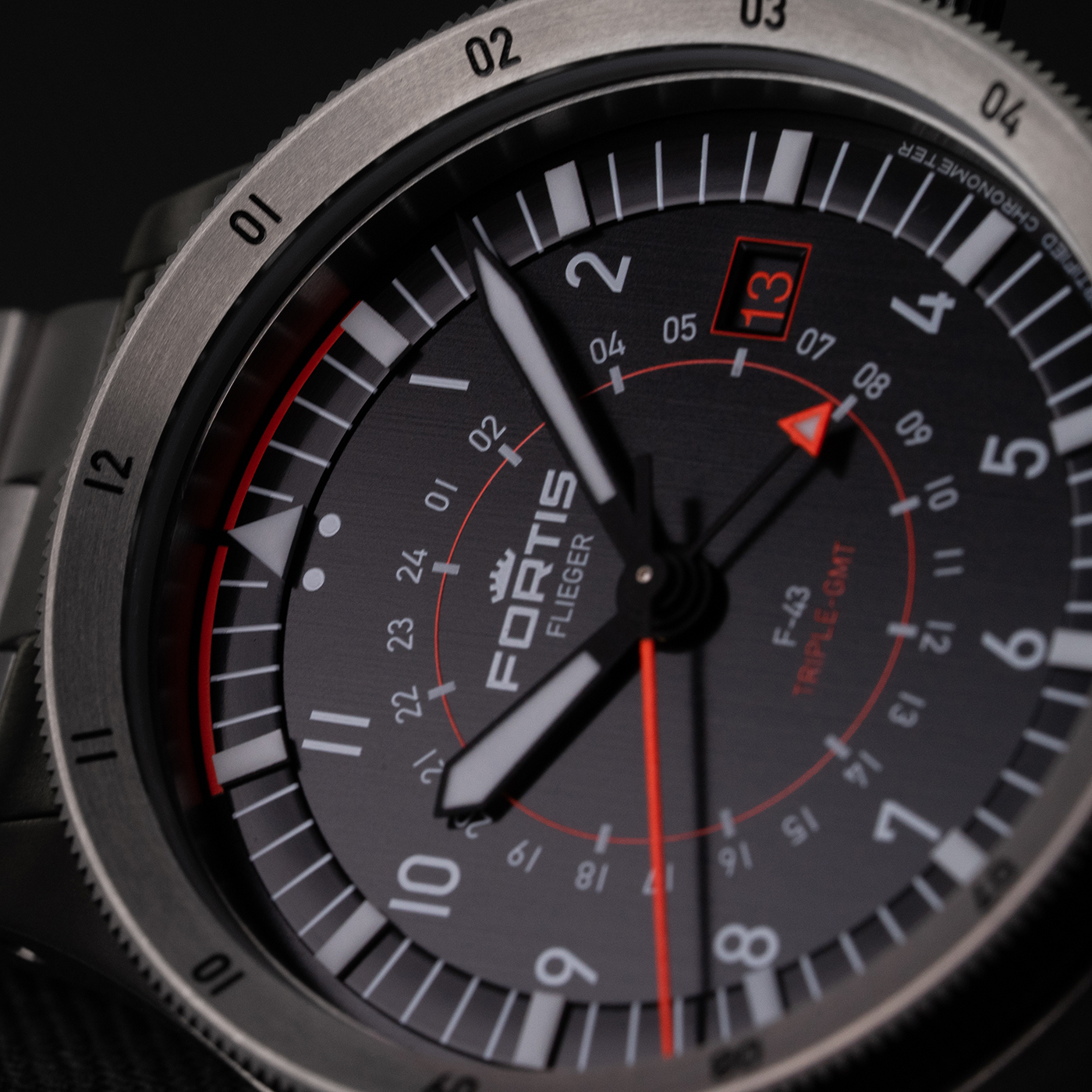 For the dial of the Flieger F-43 Triple-GMT, Fortis makes a handful of tweaks to its Flieger dial formula, but maintains the functional modernist flair that helps to define the series. In perhaps the watch’s only pure concession to style over pragmatism, the main black dial surface is finished with a subtle vertical grained pattern. This adds a touch of luster and visual detail in initial images that adds a layer of polish to the overall look, while still feeling rugged and purposeful. Other than this patterned dial surface, the rest of the Flieger F-43 Triple-GMT’s dial design cleaves close to Fortis’ modern reinterpretation of classic pilot cues, from the Roman sword style hands to the brand’s proprietary “Brixtrack” applied lume blocks supplementing the printed Arabic hours numerals. The use of fluorescent orange as a focal point continues to be both a distinctive visual touch and a tool to keep the Flieger series’ most important information easy to read at a glance with the F-43 Triple-GMT. The color is more extensive here than its stablemates, however, with punches of bright orange on the inner GMT hours ring, the arrow tipped GMT hand, the stick seconds hand, the 3 o’clock date window, and the brand’s distinctive “Synchroline” from 11 o’clock to 1 o’clock. While it’s an intense, vibrant color, its use is handled deftly enough, stopping just short of becoming overwhelming. 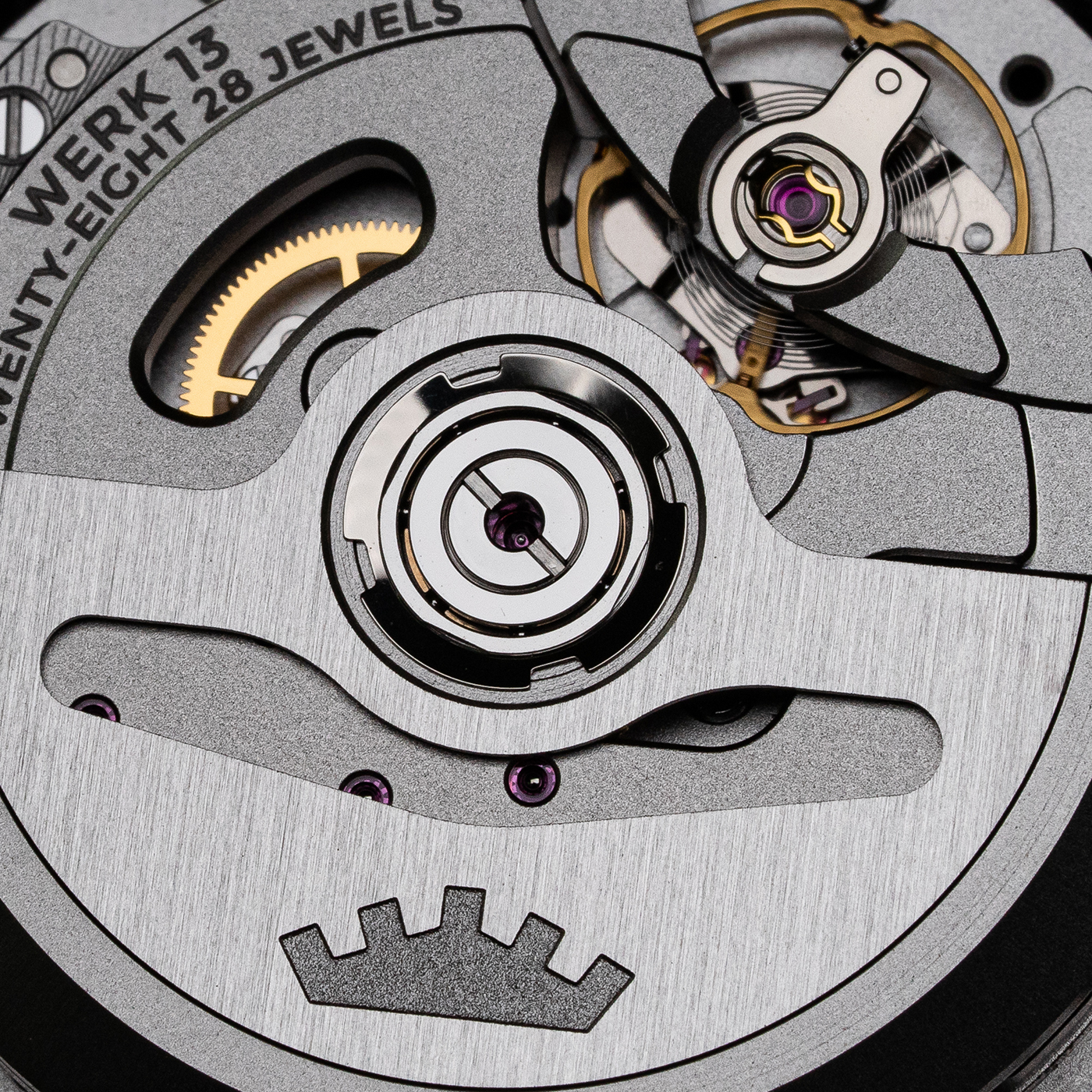 Perhaps the most important advancement Fortis brings to the Flieger F-43 Triple-GMT is its powerplant. The manufacture WERK 13 automatic GMT movement is the first new movement to be developed through Fortis’ partnership with movement manufacturer Kenissi, and features an impressive list of specs. The WERK 13 is COSC chronometer certified for accuracy and uses a traversing balance bridge with two point fixation to improve shock resistance. Perhaps most important of all to GMT enthusiasts, the WERK 13 uses a quickset jumping hour adjustment function, allowing wearers to instantly change local time when landing in a new locale. The WERK 13 also offers a hefty 70 hour power reserve. 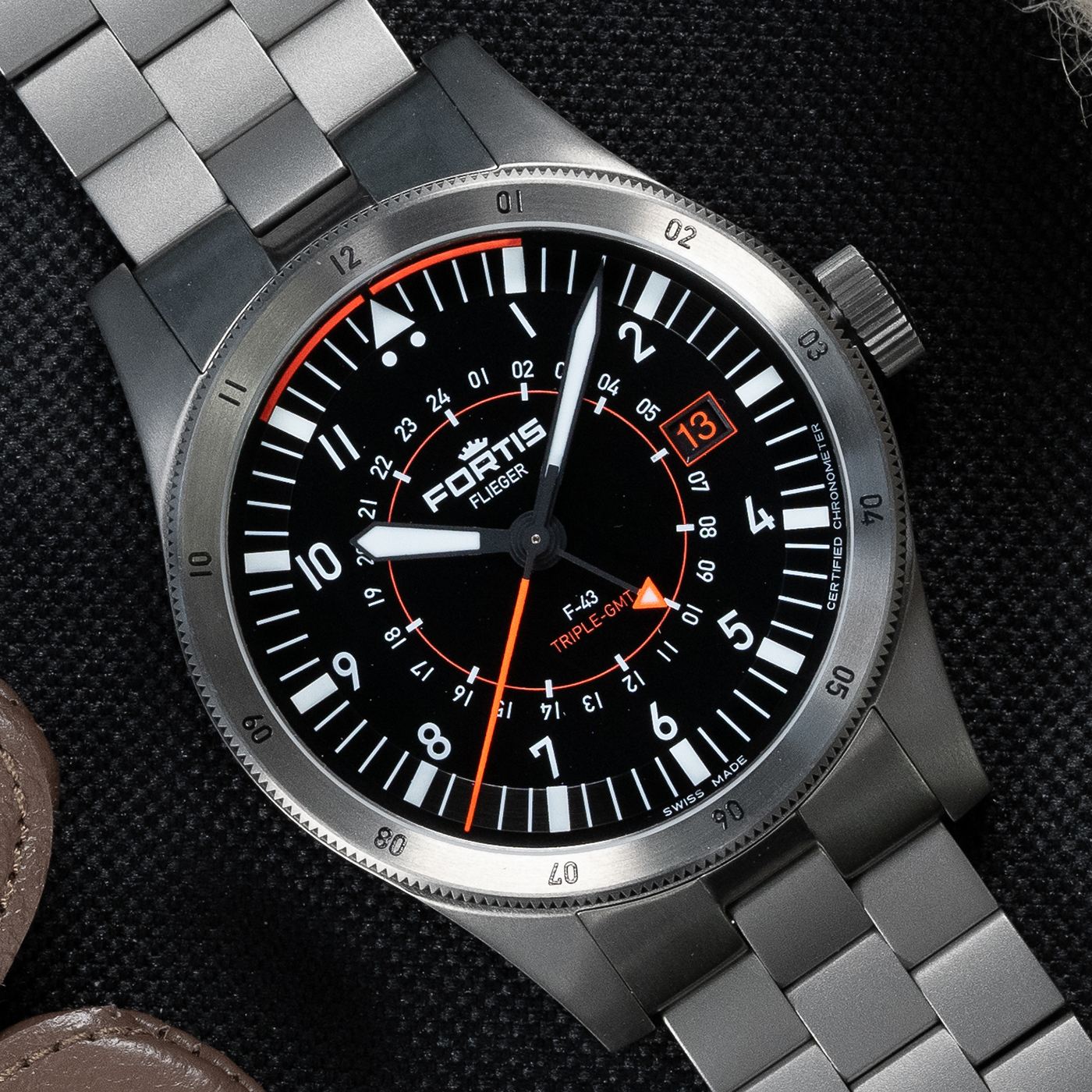 Fortis pairs the Flieger F-43 Triple-GMT with its three link oyster style bracelet in brushed titanium. It’s a slightly unorthodox pairing, adding a touch of diver feel to the utilitarian pilot watch design, but the sliding microadjustments of the clasp help to ensure comfortable wearing for a variety of wrists. 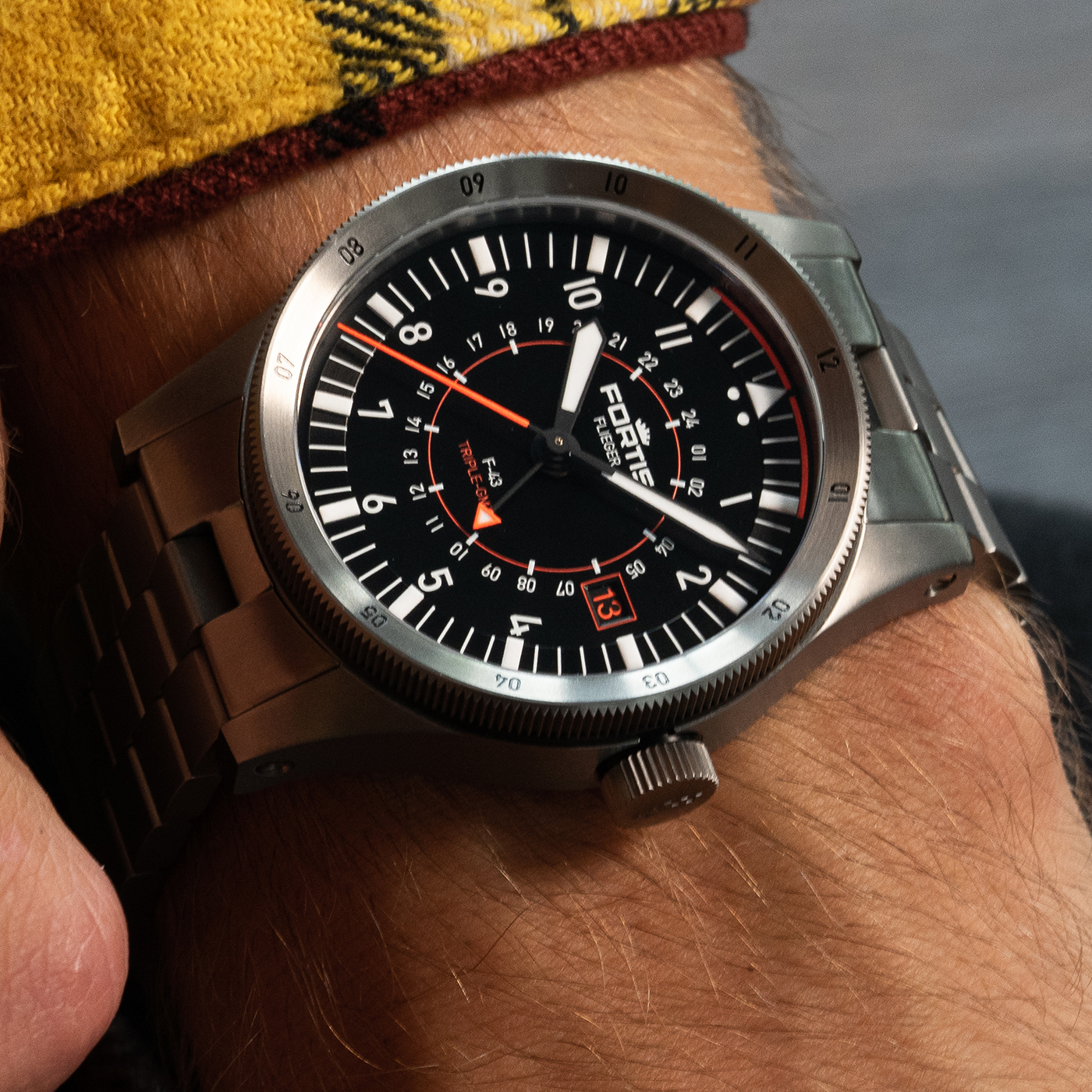