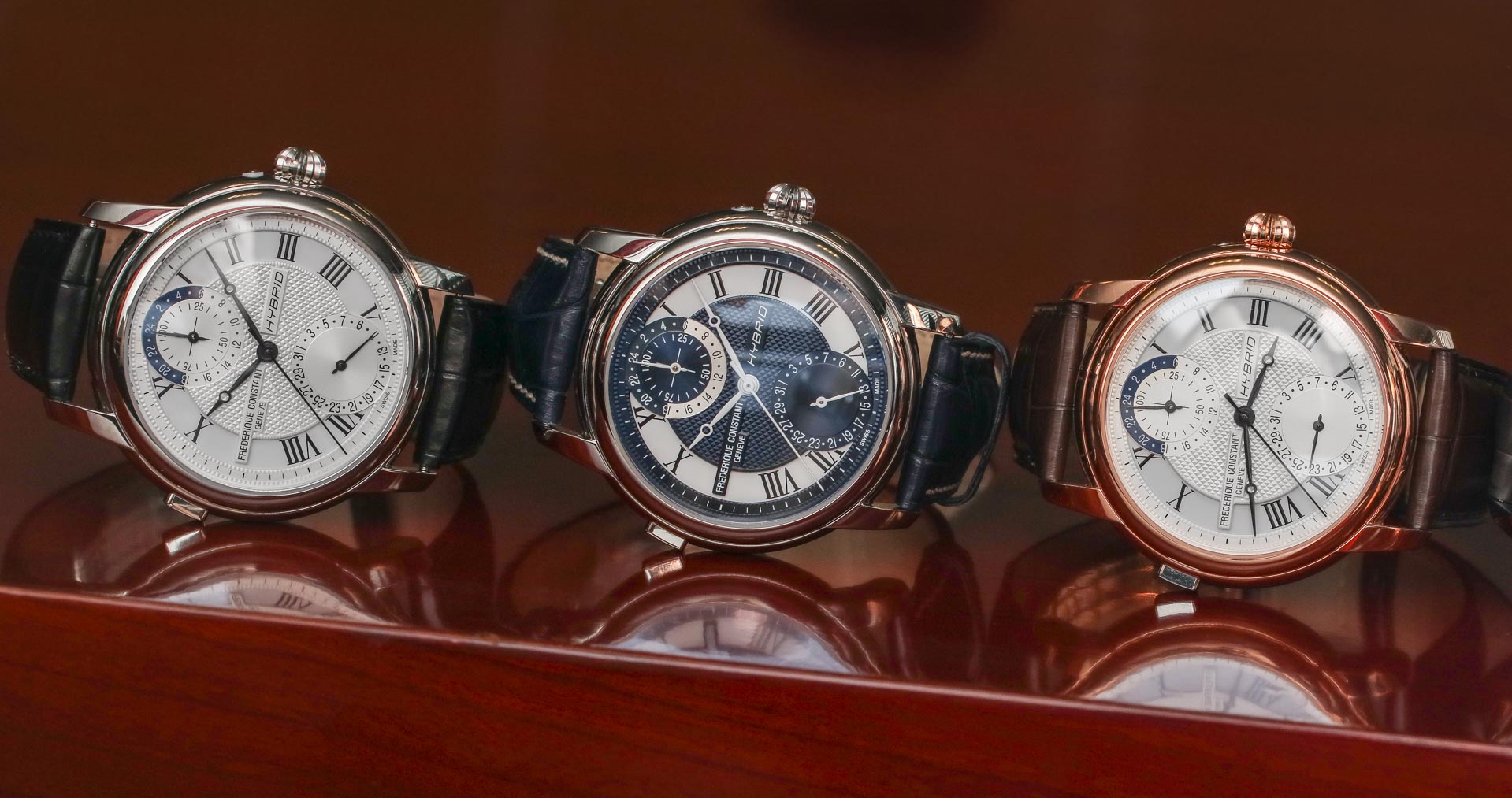 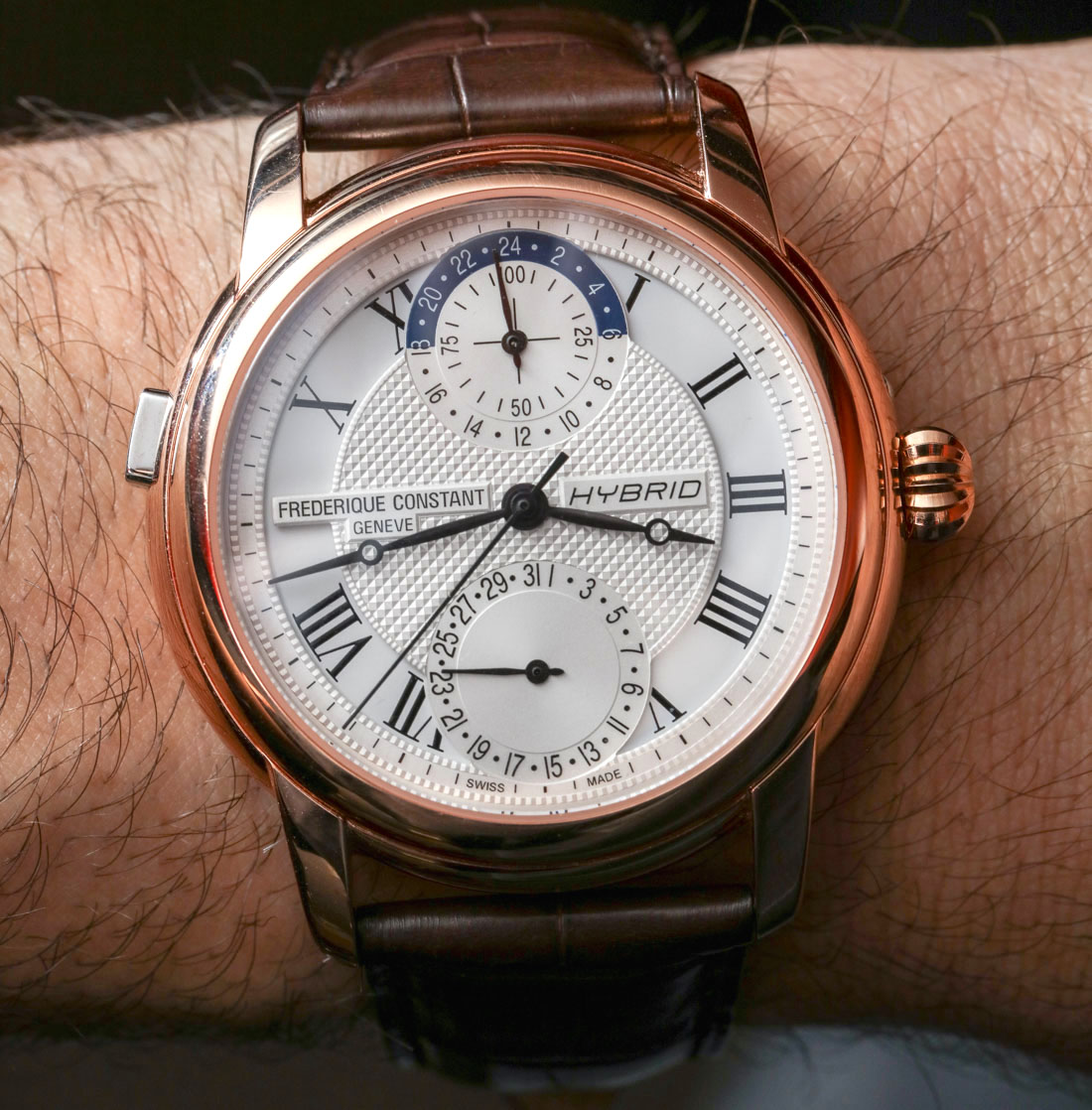 The Frederique Constant Hybrid Manufacture watch collection is but another interesting flavor of the traditional Swiss watch industry’s attempt to merge what they have been historically good at with what they feel are contemporary consumer expectations. There are traditional watches which are entirely “autonomous,” there are smartwatches, whose value is in their connectivity, and now there are so-called “hybrid” watches that attempt to offer the best of both worlds. Such hybrid watches are in many ways an entirely new segment – without clear consumer expectations or even a complete understanding of how people will ideally use them. What we are seeing is innovation as it is happening, and novelty lovers should rejoice because in an era when many people complain that new watches are stale and boring, hybrid watches are one of the few timepiece product categories with a lot of activity and experimentation. 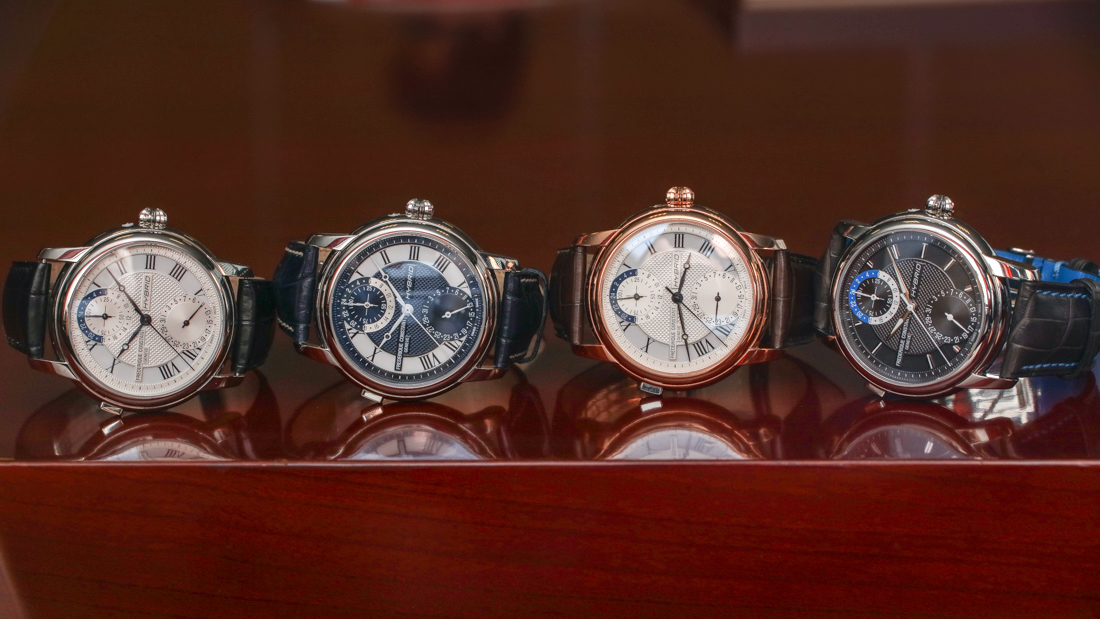 Under Japanese Citizen Group ownership, Swiss Frederique Constant will soon commercially release “Hybrid Manufacture” watches (references FC-750MC4H6, FC-750MC4H4, FC-750MCN4H6, and FC-750DG4H6) that contain both a traditional automatic mechanical movement as well as an information-connected, electronic system. I most recently saw this coming from the more exclusive (pricier with more limited production) Ressence with their e-Crown system that also debuted for 2018. You can fully bet that more hybrid-style connected, traditional watches will be released. The question for Frederique Constant is if their Hybrid Manufacture collection of watches will blend the right style, emotional appeal, functionality, and price to motivate today’s more open-minded and “first adopter” wristwatch consumers. 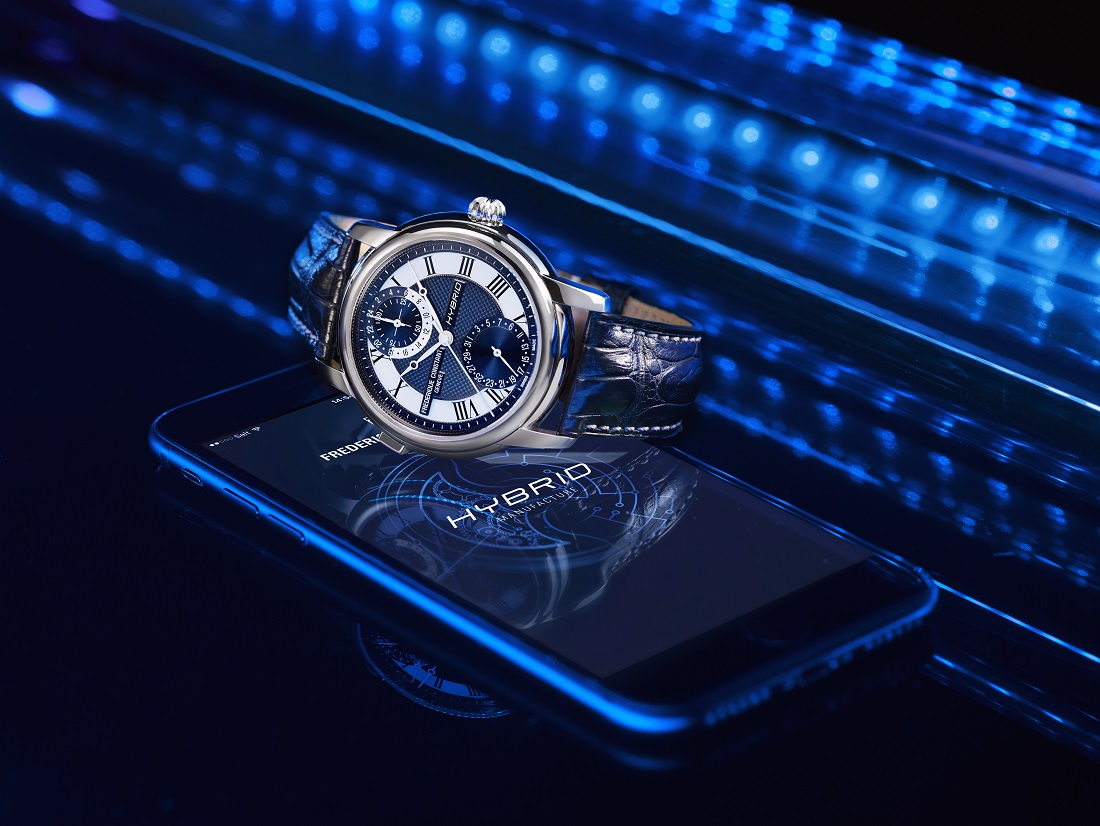 At a glance the Frederique Constant Hybrid Manufacture watches appear a lot of like many of the brand’s other current models that are entirely mechanical. There are no digital screens on the otherwise analog dial, and other than the “Hybrid” text on the dial, nothing seems to be “techie” about the watch’s visual presentation. Look inside the watch to the new in-house made Frederique Constant caliber FC-750, and you’ll be treated to a very interesting system. In short, Frederique Constant manages to combine two of its product categories into a new product category – in a way that is rather clever and not something obviously successful. 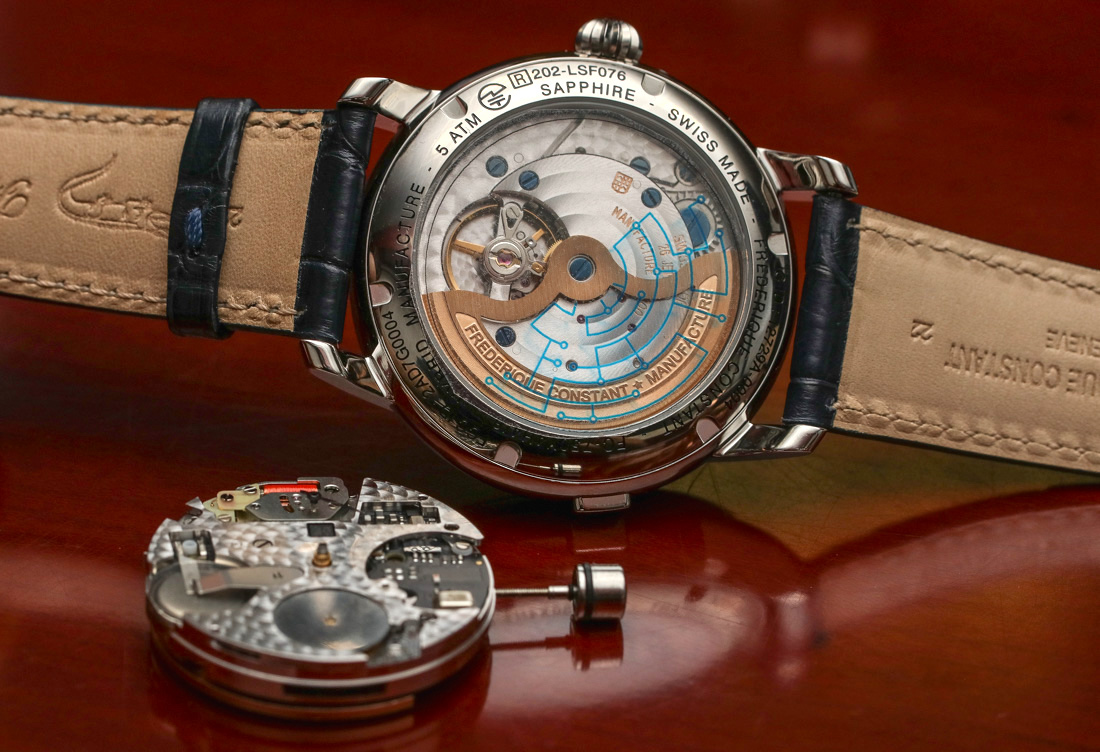 What I am talking about is Frederique Constant’s combination of their “Horological Smartwatch” system as well as their in-house made fully-mechanical movements. Horological Smartwatches are basically fully quartz (all or mostly analog dial) products that contain information-connected movements. Frederique Constant was seemingly able to engineer a way to take the electronic components and wrap them into a mechanical movement. This is mainly done via an electronic module over a standard FC-700 series automatic movement. On the dial four of the hands are connected to the mechanical movement, while the upper hand is connected to the electronic system. 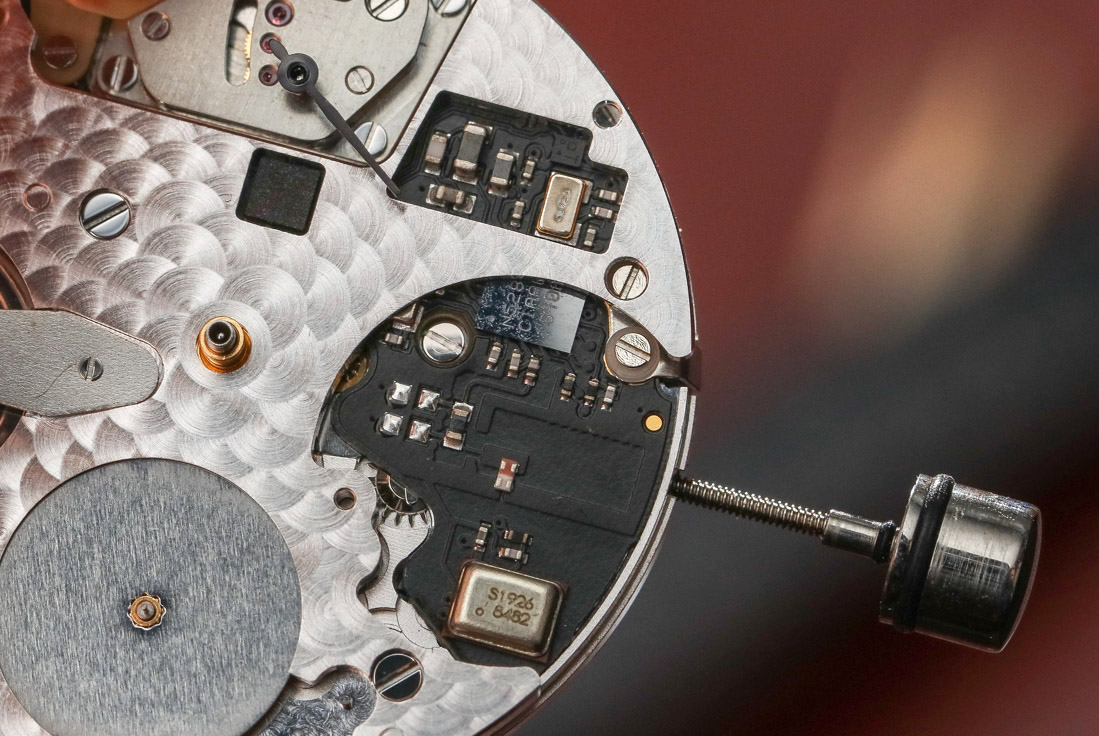 What are the benefits of this “Hybrid” system which appears to mostly be a mechanical watch with some smartwatch functionality? That is a very good question because there is something new you can do with this mechanical watch, especially at this price point. Five years ago high-end Swiss watchmaker Urwerk debuted the EMC watch (which has since come out in multiple styles). It had an electronic optical sensor that allowed the user to (more or less) instantly know how accurate the mechanical watch was. 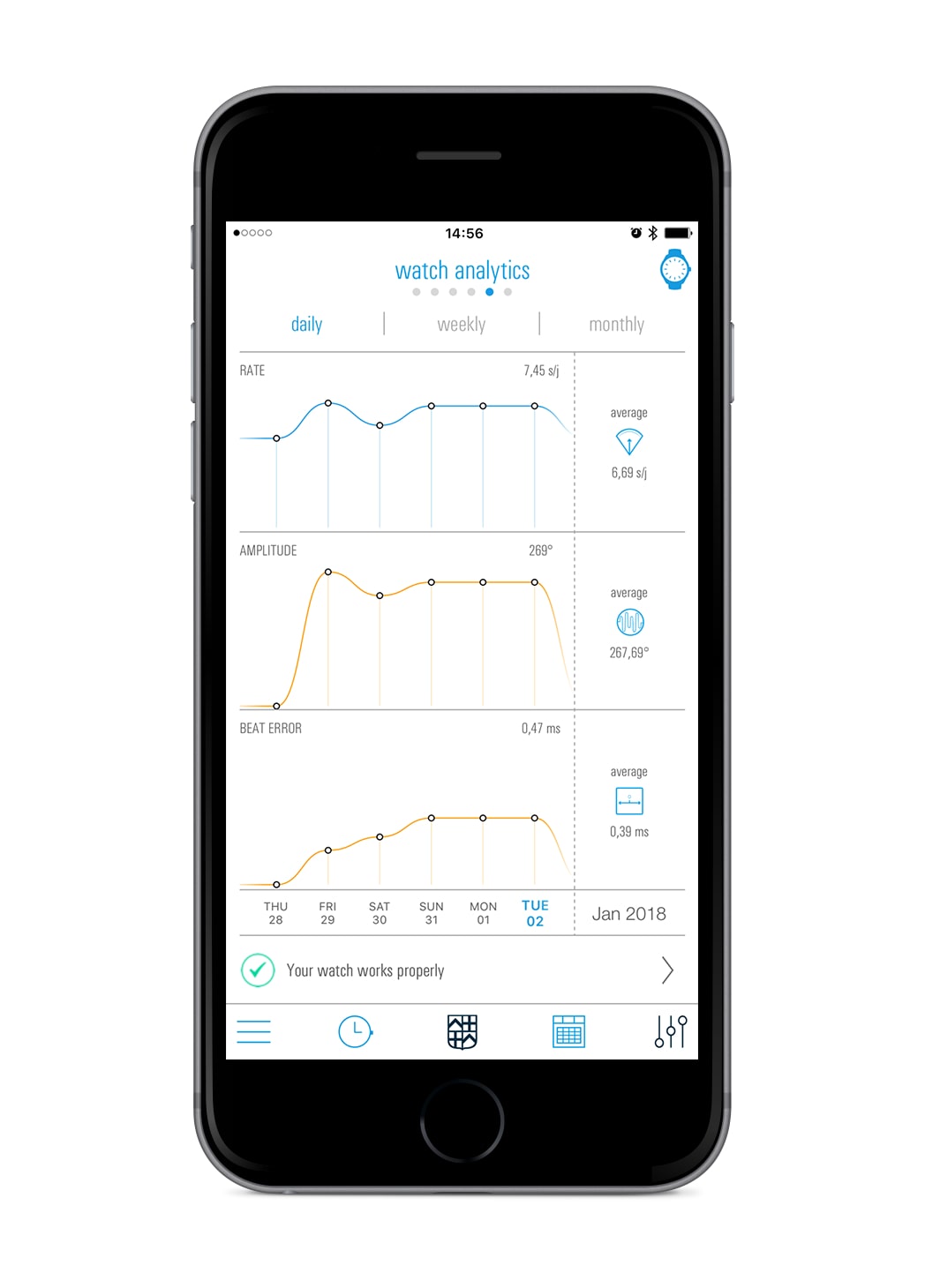 Frederique Constant has incorporated this “diagnostic tool” into the Hybrid Manufacture system in what it calls “Caliber Analytics.” That means in addition to having some smartwatch features such as activity monitoring, the Hybrid Manufacture watches allow for their owners to be even more dedicated watch nerds by offering diagnostics into the performance of their mechanical watch. This is done via an audio sensor that listens to the movement (as opposed to an optical sensor, which is used in the Urwerk). Information available via the accompanying smartphone application related to the movement performance includes rate, amplitude, and beat errors).

The Caliber Analytics system doesn’t set the correct time for you but will alert you if your watch performance is really off. It also automatically checks the movement “health” each day. The reason that the electronic system cannot automatically update the time is because it is not technically connected to the movement. Thus, the Hybrid Manufacture movement system from Frederique Constant (and likely sister brand Alpina soon) is really a totally mechanical movement sitting alongside a complimentary but not necessarily fully-integrated electronic system. This is an important nuance and will have an effect on the types of consumers interested in such a high-end timepiece product. 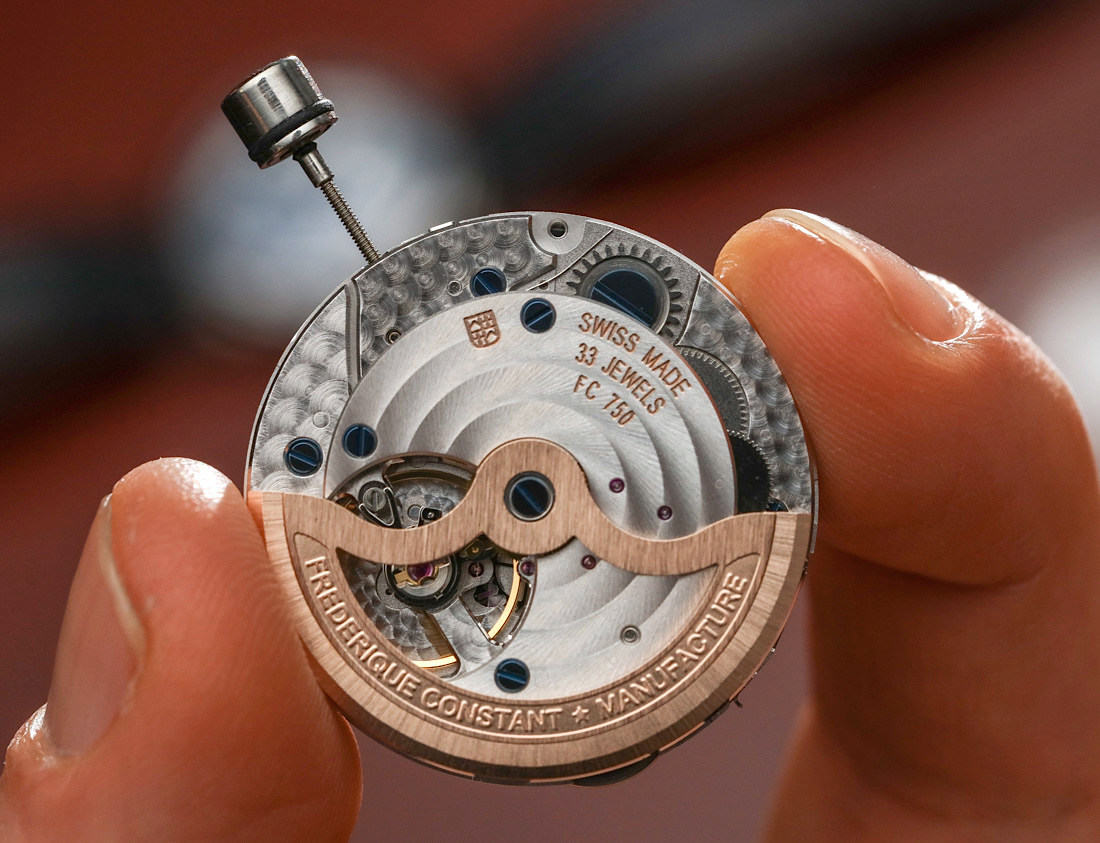 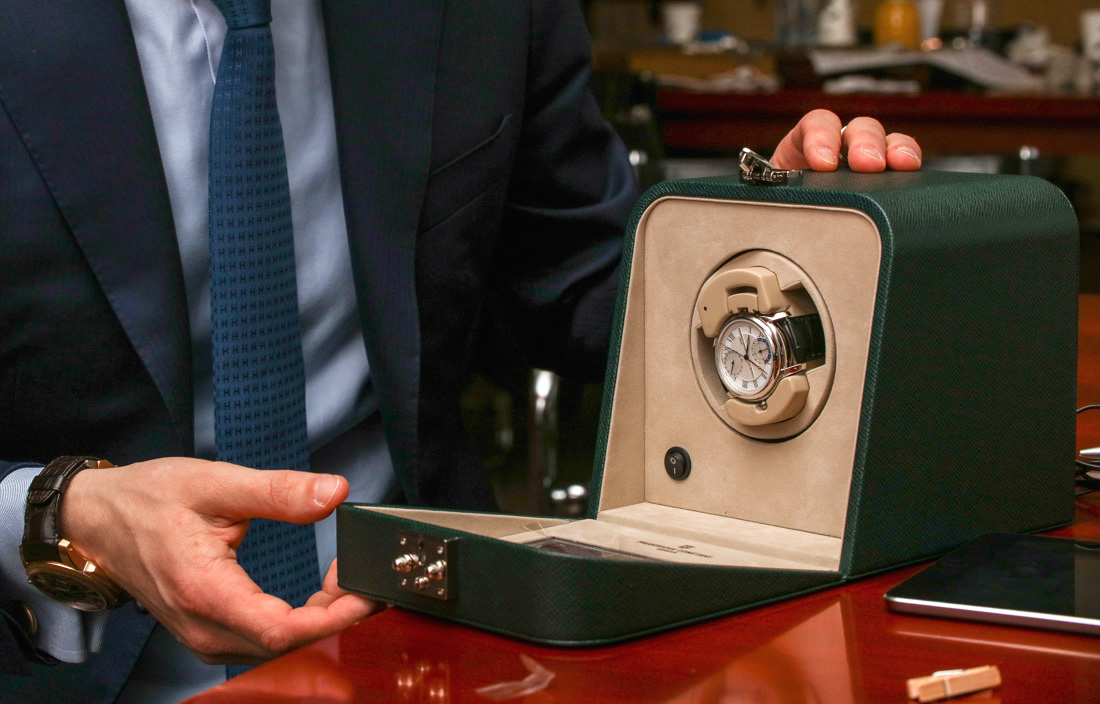 What else can the smartwatch system do? Frederique Constant incorporated a rechargeable battery into the FC-750 movement that controls the smart functions. Its charging port is in the crown and will need to be put into the specially made charger/winder that comes with the Hybrid Manufacture watch system. This is a clever solution since the box both winds the automatic movement and charges the electronic system. The charger itself can be removed and used for travel purposes, which is a nice option to have. 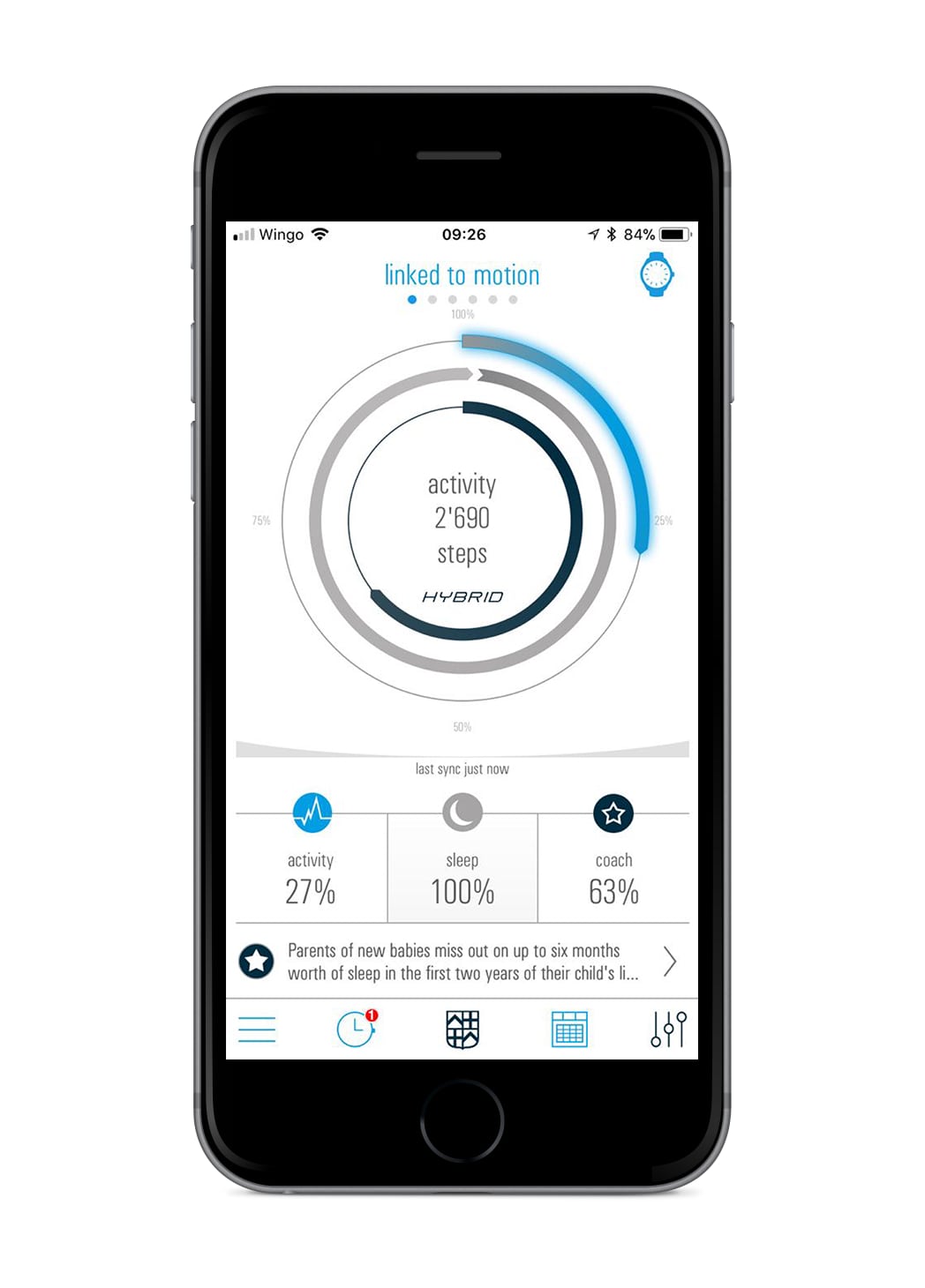 Frederique Constant designed its original Horological Smartwatch system to be a watch that you didn’t need to take off on a regular basis since it included sleep tracking as well as overall activity tracking. This functionality persists in the Hybrid Manufacture watch as well as other basic connective features such as using the upper hand as a 24-hour world time hand. The Frederique Constant “Hybrid” app mostly focuses on activity/sleep tracking, as well as the Caliber Analytics side of the equation. There is no functionality designed to offer phone notifications or similar tasks. The pusher on the left side of the case can be set to activate various features and is adjusted from within the app.