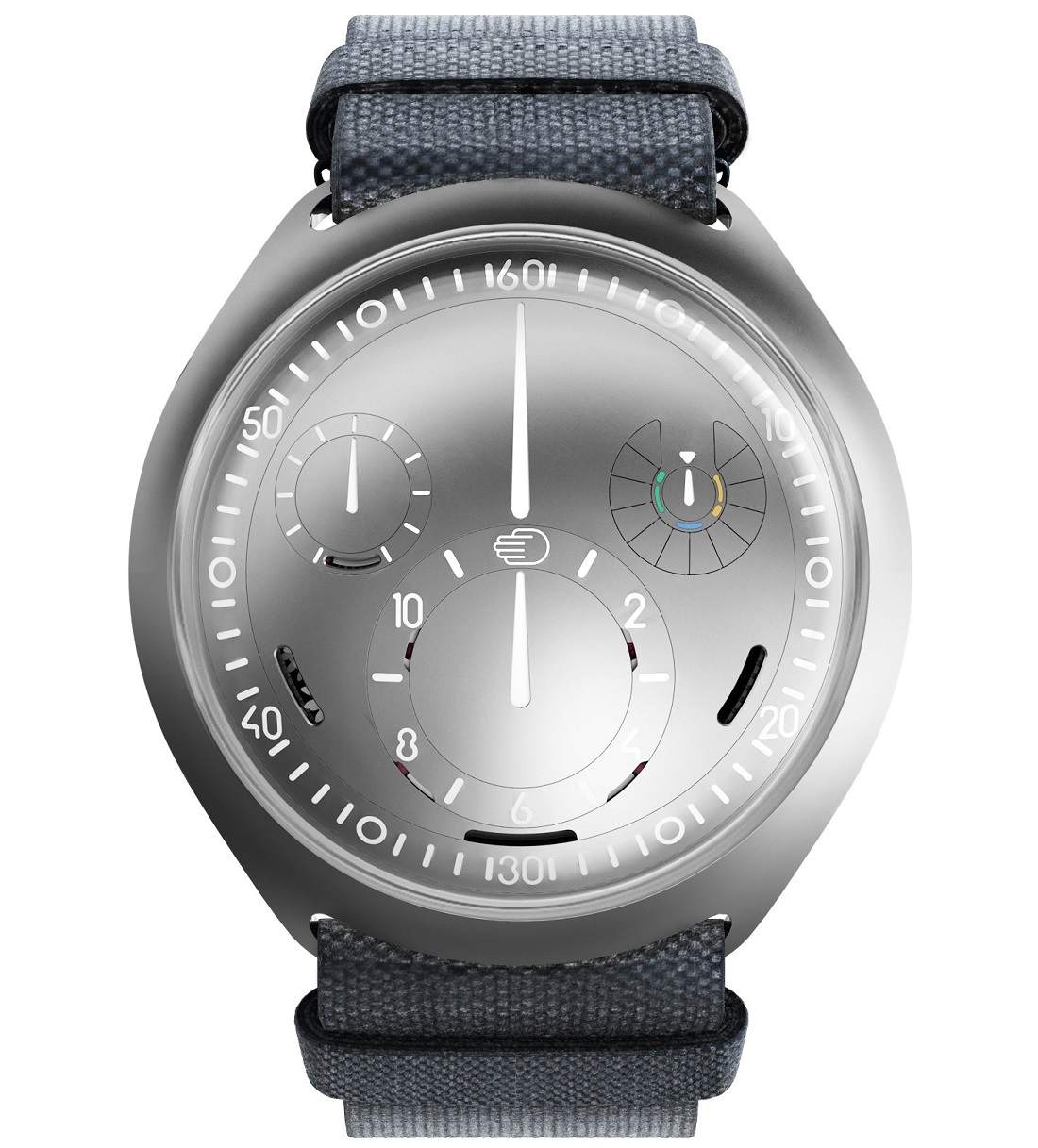 Belgium-based Ressence will debut a very innovative new system called e-Crown at SIHH 2018 in the Ressence Type 2 e-Crown watch. Initially debuted as a concept, this promising technology will be available for purchase later in 2018, which means this isn’t a concept to be falsely excited about. Ressence promised that Type 2 e-Crown watches will be in stores around June 2018, with later e-Crown-equipped watches coming soon. So, what is e-Crown?

“E-Crown” or “electronic crown” is a new intermediary system that lives inside an otherwise totally mechanical watch. If you are familiar with Ressence watches, you already know that each watch has two existing modules. First is the movement itself, and second is the ROCS (Ressence Orbital Convex System) module which includes the display of the watch. The e-Crown is a new middle section module that will exist between the base mechanical movement and ROCS. It is an electronic system which replaces a traditional crown, and is the very epitome of what innovation in the high-end watch industry should look like these days. Before discussing e-Crown more, I want to applaud Ressence (as a small independent watchmaker) for pushing to make this technology a reality. Thanks to them for making a watch writer’s job continually interesting. 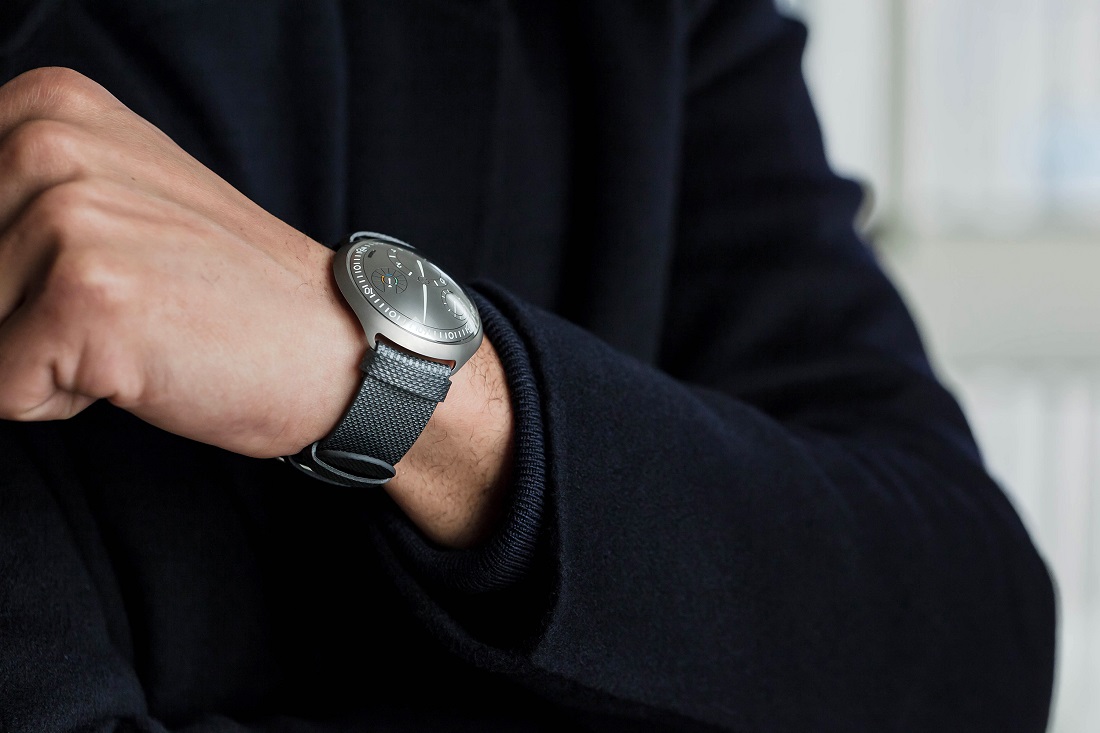 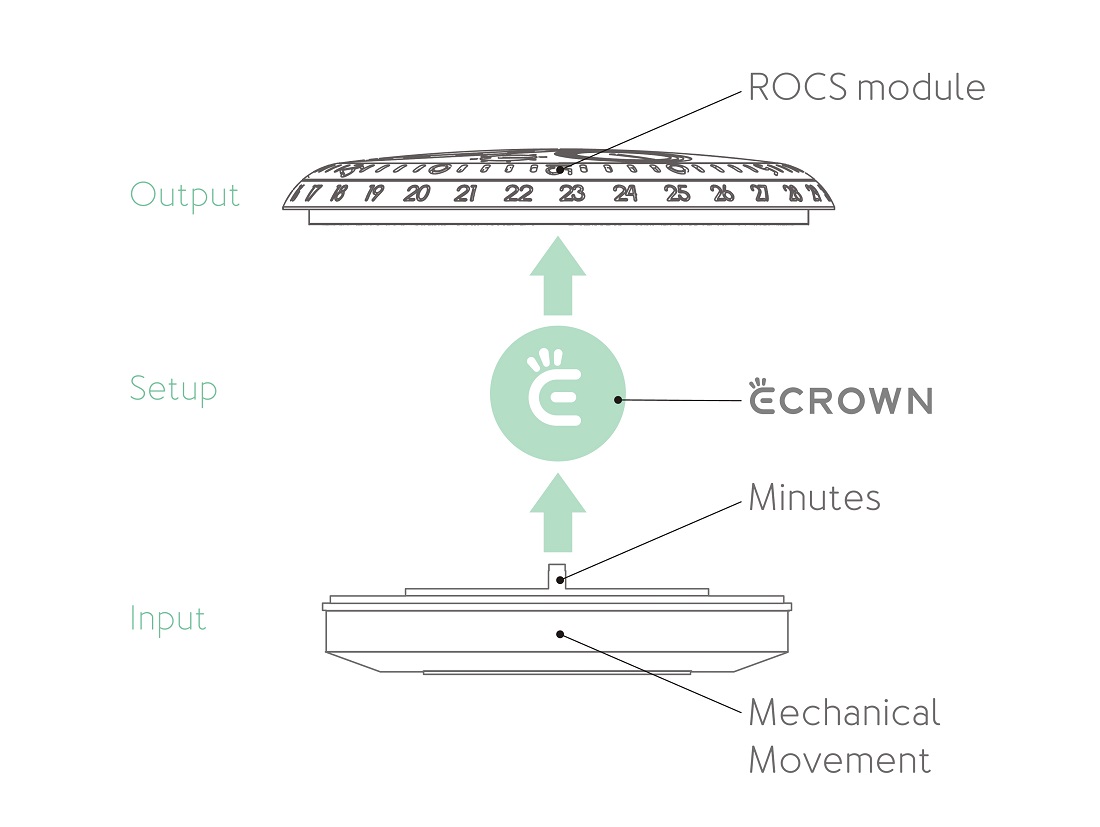 The purpose of the e-Crown is very straightforward, and that is to increase the accuracy of a mechanical watch. It does this by resetting the time in the mechanical movement at regular intervals or manually. Either manually in the watch or via the optional e-Crown Bluetooth-connected mobile phone app, the watch wearer sets the time in the e-Crown system. This time is stored via the electronic system, which is inherently far more reliable and accurate than mechanical timekeeping. 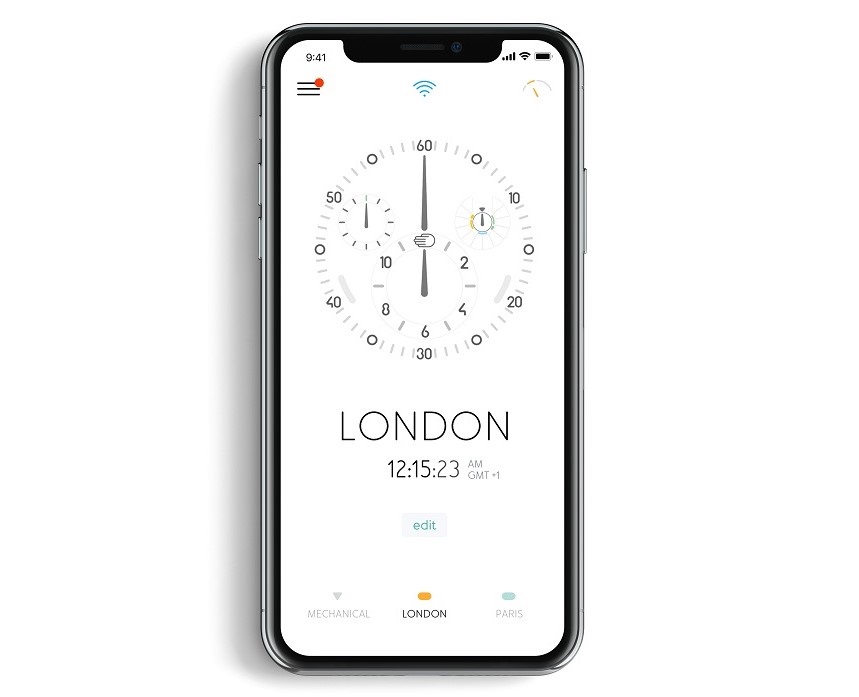 The e-Crown system doesn’t require any battery changes. Ressence designed it to accumulate energy in two ways. First, the e-Crown system has a rotor which kinetically generates power as it moves. Since the base movement in the Type 2 is also an automatic, this means that the e-Crown-equipped watch will have two moving rotors that generate two types of energy (electricity and spring tension). The e-Crown also captures light to store as energy through a photovoltaic cell. This is one of the really cool elements of the watch from a mechanical standpoint. 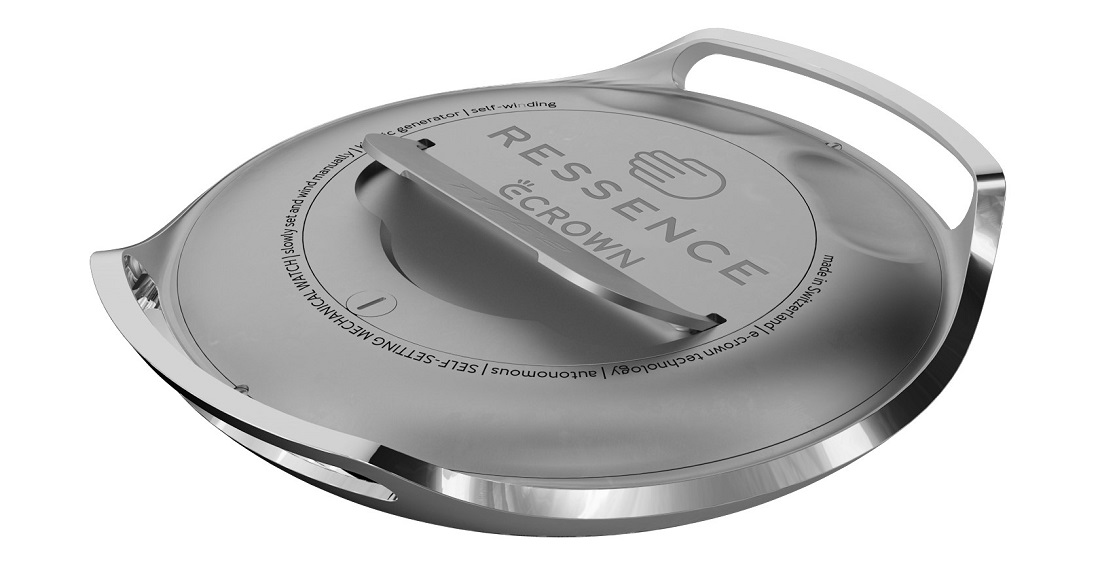 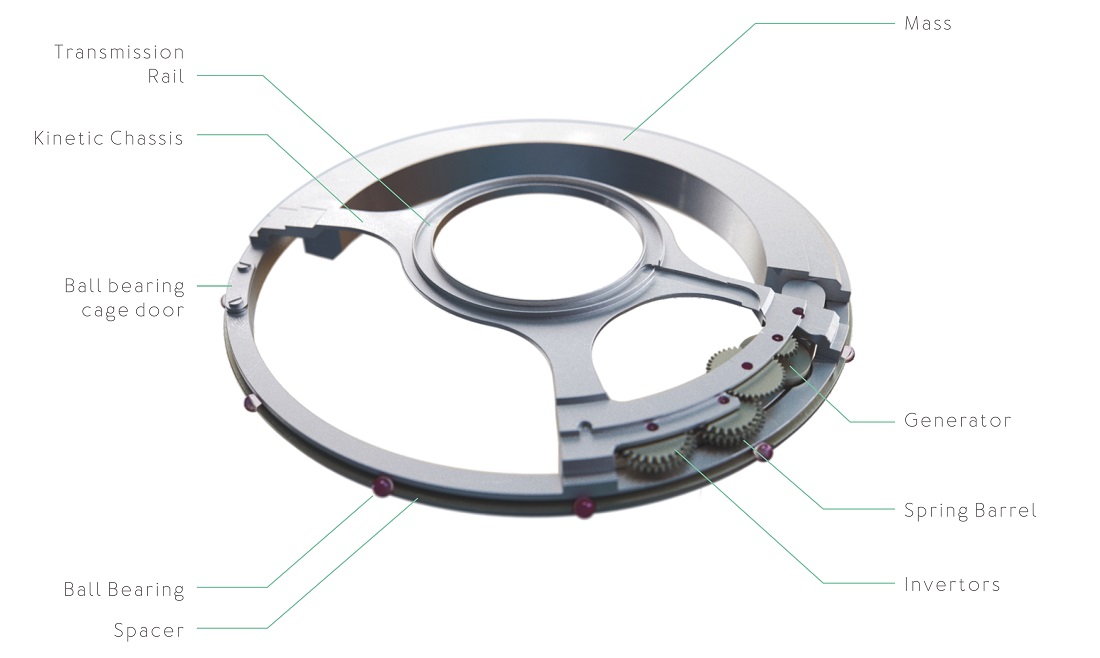 Small shutters in a sub-dial on the face open either automatically when the system needs energy, or manually using the Bluetooth connection that allows light to enter through the dial to the photovoltaic cells under the dial. This means that the Type 2 e-Crown watch required the creation of a totally new generation of ROCS modules. Most of the components are produced from lightweight grade 5 titanium. The entire watch itself is produced from about 500 parts making it truly innovative as well as truly complicated.

Ressence developed e-Crown to bridge the gap between the world of traditional mechanical watchmaking and the world of modern technology that we live in. Ressence follows a lot of the thought patterns that I’ve advocated over the years ranging from bringing consumers actual innovation as well as including the world of modern technology in the world of watchmaking. Ressence customers are often people in the tech industry, so it was easy for Ressence to make the decision to develop this type of system which is intended to appeal to them. Even though the price for the Type 2 e-Crown watches isn’t set yet, we know based on the brand’s standard pricing that cost will be at least $40,000–$50,000 (and perhaps even higher). 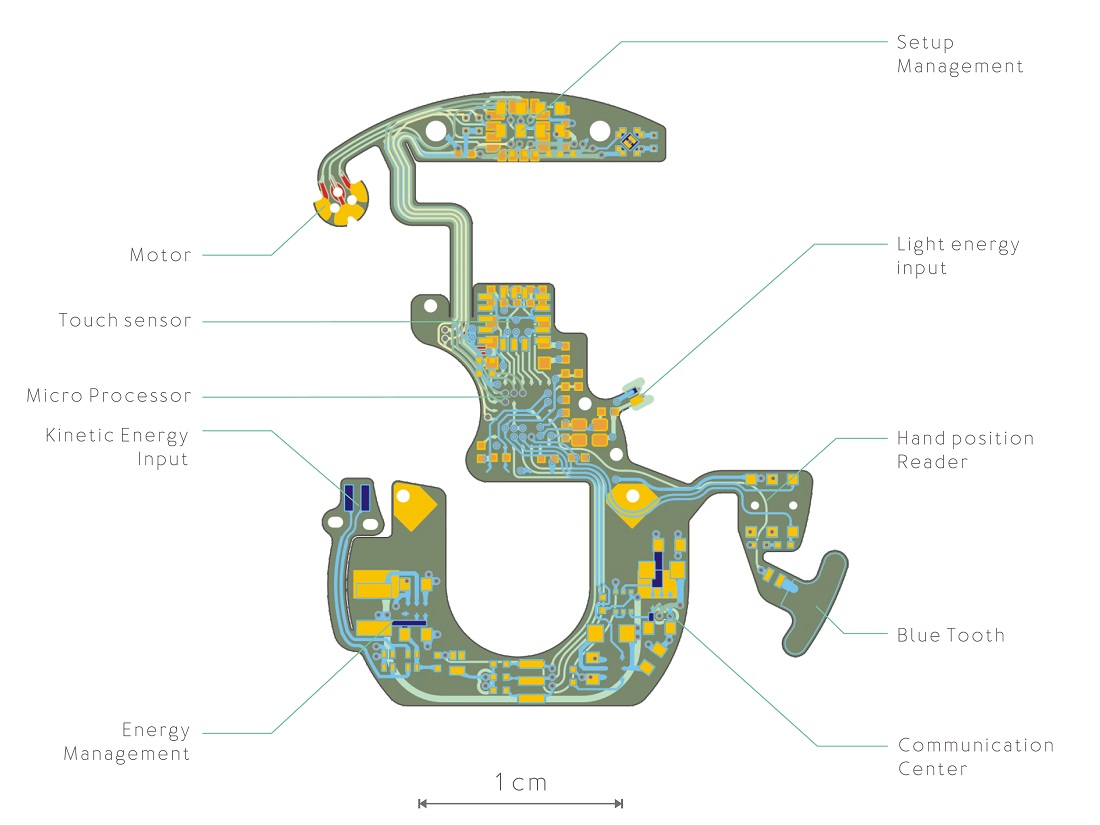 The name of the game here is accuracy, and this is in response to what I feel is a growing trend of consumers being interested in the accuracy and performance of their traditional watches. With smartwatches becoming more universally worn and accepted, a growing number of people have increased reliability and accuracy expectations for their timepieces. Watches on the wrist are once again becoming a tool to tell the time, and traditional mechanical watches (certainly not known for their accuracy as compared to electronic quartz watches) are not at all known for their ability to keep up in terms of accuracy.

The e-Crown is a sort of middle ground allowing fans of traditional watches to also enjoy accuracy. On top of that, Ressence likely hopes that the inspired and complicated design and construction of the e-Crown system will appeal to consumers in similar ways that mechanical watches appeal to them. This includes a lot of moving parts that you can see with your own eyes. Having 10 opening and closing shutters on the dial is part of that emotional (as well as functional) appeal. I say all this because watch novices viewing this technology might logically ask “so why is there a mechanical movement in the watch at all?” 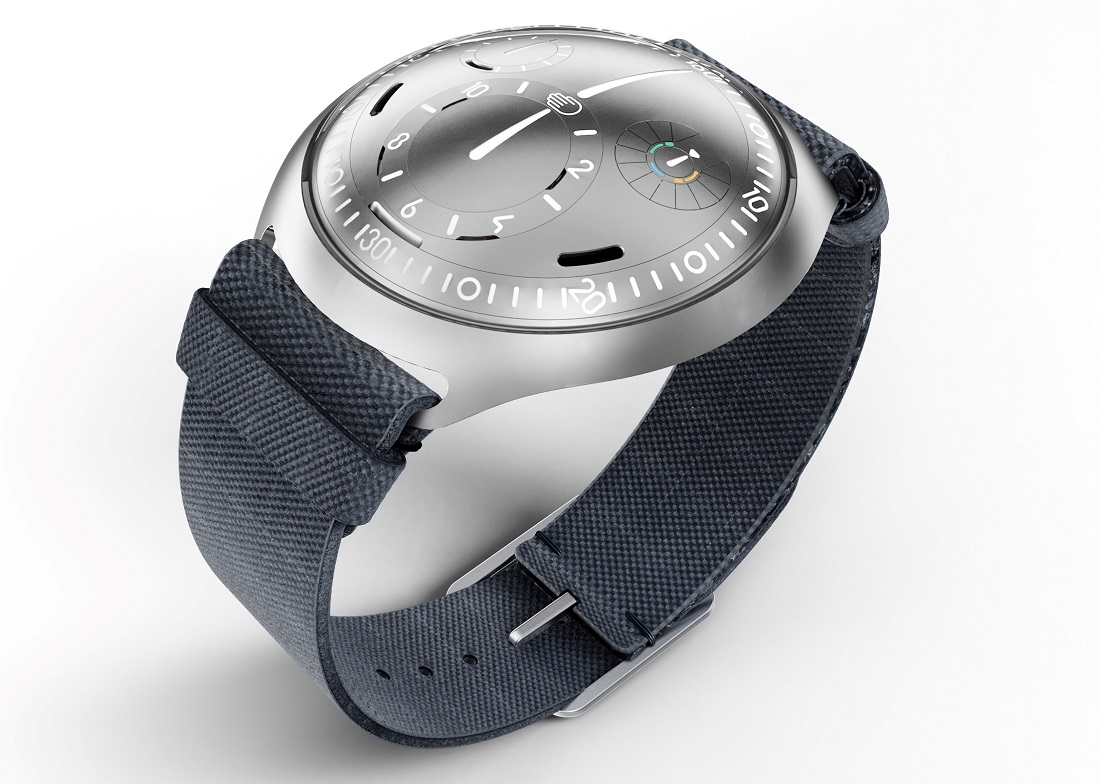 Tapping twice on the crystal of the watch after it has been in a resting state allows the e-Crown system to wake up. Even when in sleep mode the system keeps the right time, and then using its mechanical systems, proceeds to set the right time in the ROCS module. After that, the ROCS module is powered by the mechanical automatic movement inside of the watch on the lowest level of the module stack. Using e-Crown is totally optional, and if the user prefers, they can simply set the time manually and pretend like the watch is entirely traditional.

As I mentioned above, when you use e-Crown there will be two ways to do so. First is manually via the watch itself and second is via the e-Crown app. Ressence further allows for e-Crown to store times in various time zones, allowing you to easily switch the time on the watch when traveling. I’m pretty excited to test the system out myself. 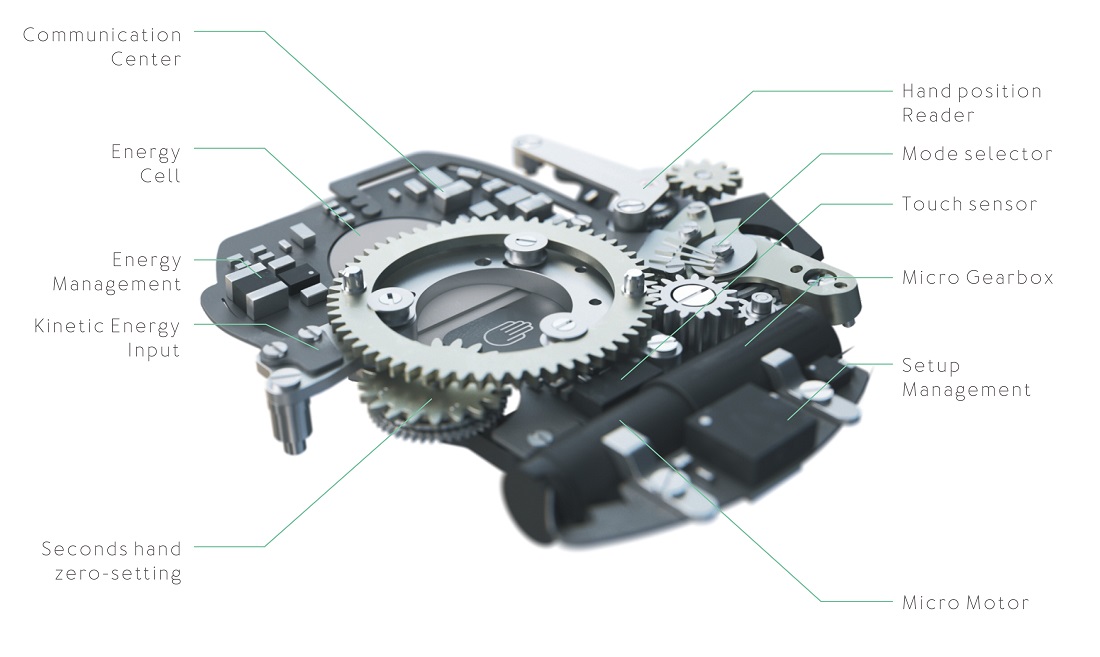 The e-Crown “cluster” is composed of 87 parts, which includes a silicon board as well as mechanical parts. According to Ressence, the entire system requires only 1.8 joules of energy per day to operate. My understanding is that the e-Crown system was developed to be entirely exclusive for Ressence – making it a truly innovative and rare piece of technology.

The first e-Crown equipped watch will be the Type 2 e-Crown, which I will have more information about soon. It is based on the current Ressence Type 2 watch, but with the new e-Crown and ROCS modules. Updates to the dial include a new symmetrical layout, small openings to view the mechanics on the underside of the dial, as well as the shutter and power reserve indicator system for the e-Crown. 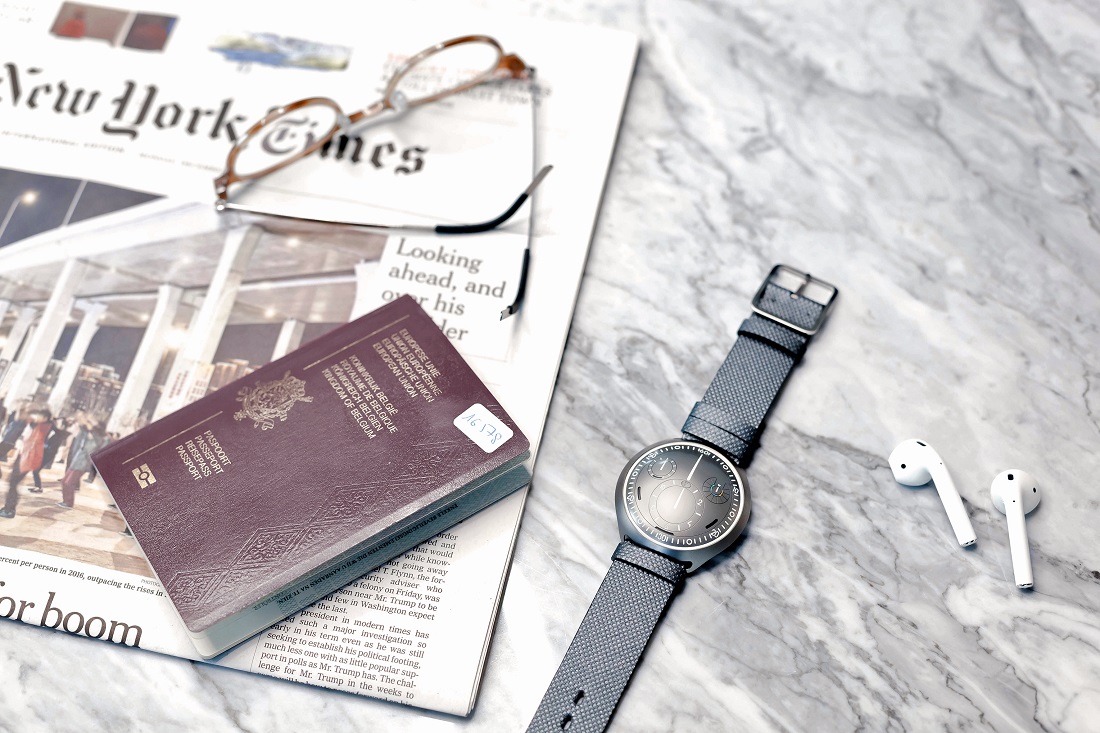 I’m already considering that the Ressence e-Crown will be among the most talked about watches of 2018, and my major hope is that Ressence will be able to faithfully deliver on the big promise set forth here. My hope is that the big brands will take notice of this innovation and ideally focus on creating their own innovations that are dedicated to merging mechanical timekeeping with added performance such as accuracy and timing stability. Sure, there will be purists who don’t like anything electronic in their watches, but for me, this type of product is incredible and exactly what I like to see the watch industry experimenting with. Again, the first watch with the e-Crown system will be the Ressence Type 2 e-Crown that will be available for sale around mid-2018. e-crown.com | ressencewatches.com