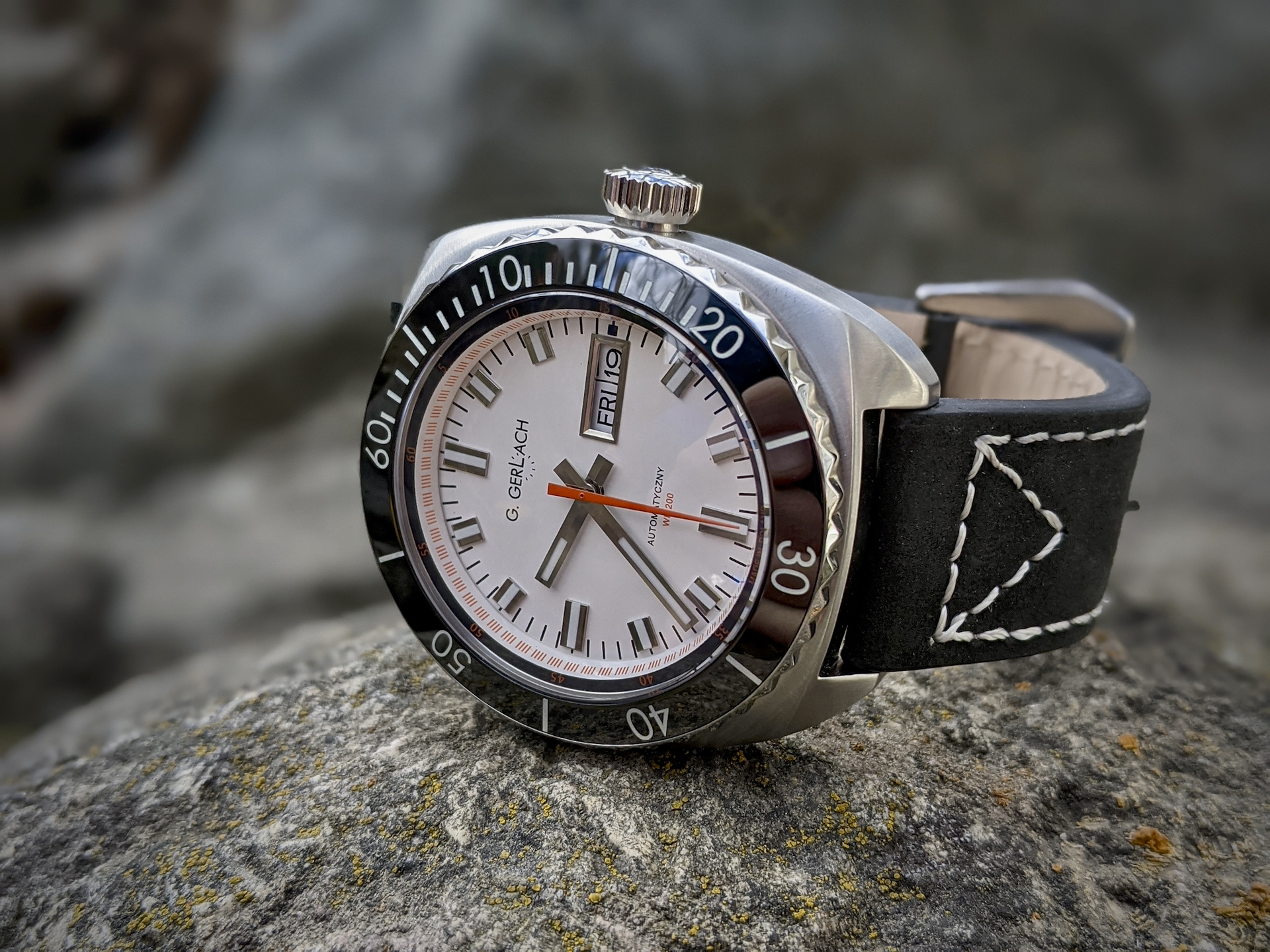 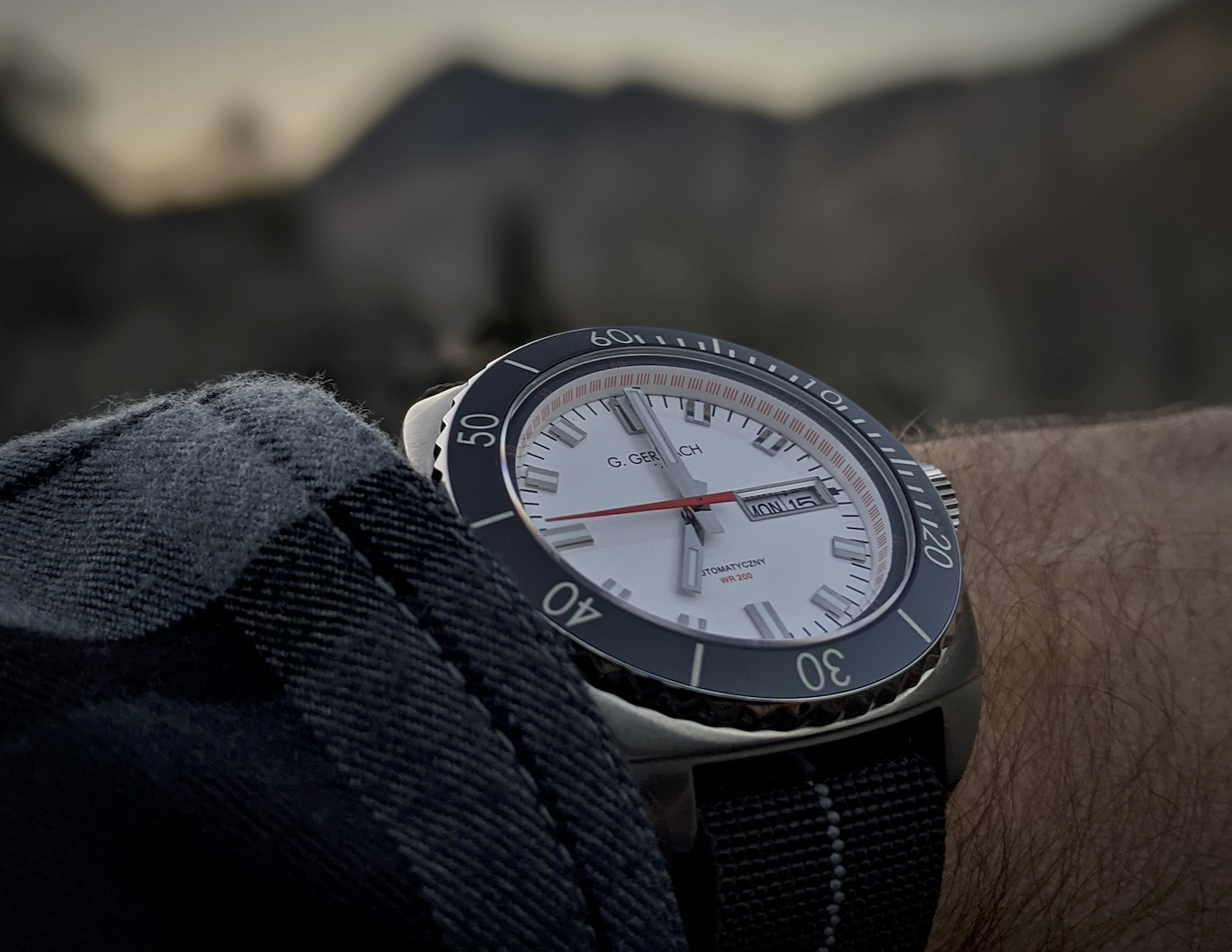 G. Gerlach’s watches have always been an intriguing curiosity in the sea of small, independent brands. These designs are unique and interesting (if not always to my personal taste), and their value is top-notch, but what truly sets them apart is their brand’s commitment to Polish design and manufacturing. The Enigma II is one of the more conservative designs in the lineup, but it has plenty of personality and a compelling story to tell.

G. Gerlach is not an eponymous brand named for its founder, as tends to be the case for so many. Instead, the brand was named in honor of Polish industrialist Gustaw Gerlach, who created a range of measuring tools and equipment throughout the latter half of the 19th century and into the 20th century. Now, to understand why a watch brand would choose to name itself after a Polish industrialist, you need to know a bit more about Poland’s history in design and manufacturing. Poland is one of the largest manufacturers in Europe, producing everything from cars to airplanes to televisions. Yet, despite their manufacturing prowess, Poland spends relatively little on research and development, resulting in what the brand sees as a lack of investment in innovation. As such, the G. Gerlach brand was resurrected in order to provide an outlet for Polish design and technical innovation — an avenue for bringing watches Made in Poland to life and re-establishing home-grown investment in innovation. 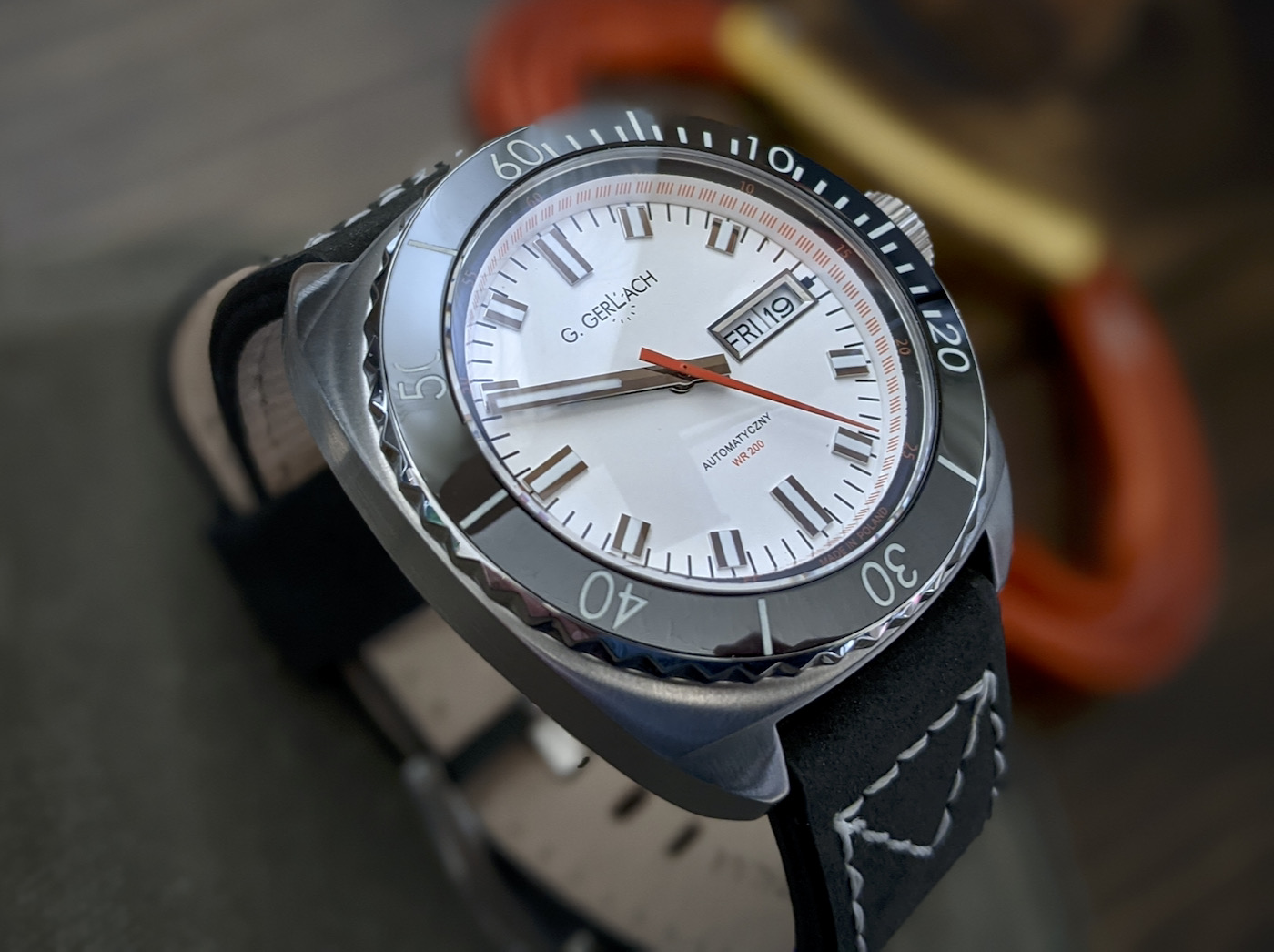 G. Gerlach makes a wide range of watches, including everything from pilot and automotive watches to divers. What they all have in common, however, is an explicit link to Poland’s rich heritage and an eminently affordable price point. In the case of the Enigma II, G. Gerlach has focused on showcasing Poland’s role in breaking the Nazi’s cipher machine, Enigma. While Alan Turing and the brilliant minds at Bletchley Park tend to receive all the praise for breaking Enigma, three Polish cryptologists, Marian Rejewski, Jerzy Różycki, and Henryk Zygalski, were instrumental in the effort, transforming the practice of cryptography from one based on linguistics to one that relied heavily on mathematics. When the team at Bletchley Park learned of the advances made by the Polish Cypher Bureau, the British quickly adopted their approach, ultimately allowing Turing and his team to crack Enigma. Sadly, as Poland fell during the war and was later sealed behind the Iron Curtain, Rejewski, Różycki, and Zygalski’s contributions were largely lost to history. Sure, it’s a small thing, but seeing the names of these three Polish heroes (honestly, can you think of a better word to describe them?) on the caseback is a nice way to honor their legacy. I’d be hard-pressed to think of a more deserving trio. For me, these links to the past and the brand’s pride in the nation’s history are some of the things that make Gerlach watches so charming. 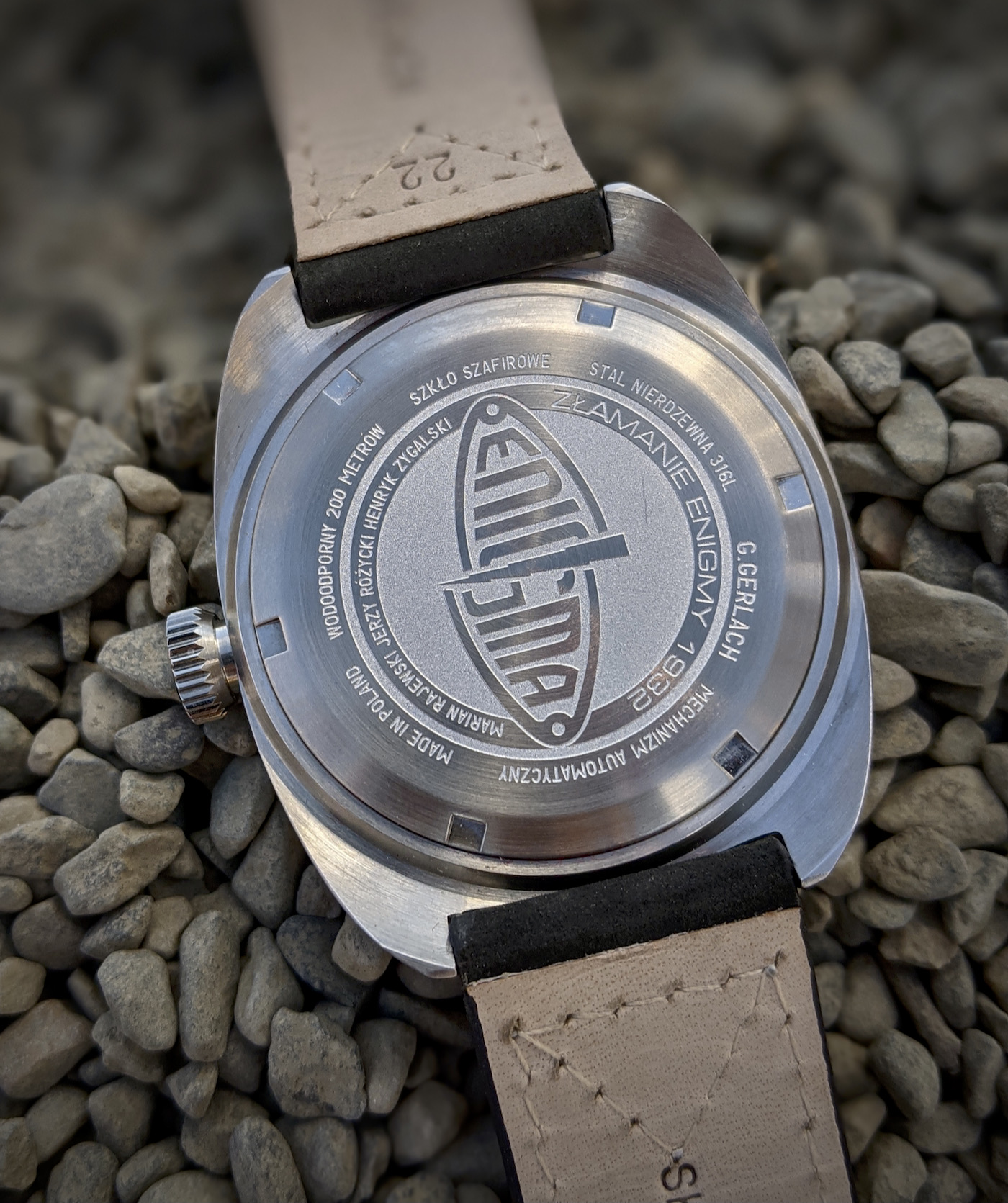 Let’s move from the past to the present and get to the watch itself. The Enigma II is housed in a 43mm stainless steel cushion case. Despite the relatively large case diameter, the short, sloping lugs and cushion case allow the watch to wear more compactly than the spec sheet might suggest. Don’t get me wrong, it looks every bit the 43mm diver when on my 6.75” wrist, but the shape of the watch should wear comfortably on most wrists — it sits nicely on mine without flopping or overhanging. The lines of the case are soft throughout, including a gentle step on the case that demarcates the lugs. Moving to the side of the case, there’s a smooth sweep of the midcase that’s largely responsible for the watch’s comfort. Flipping the watch over, the solid caseback has a stylish engraving of broken Enigma text. The engraved specs on the caseback are all written in Polish. Usually, I’m indifferent to casebacks, but I love the details on the Enigma II. Finishing off the case is a signed, oversized crown that’s easy to grip and turn. The case is well-executed and the finishing is solid, especially when considering the price. The fact that the watch is made in Poland makes it just that much better. 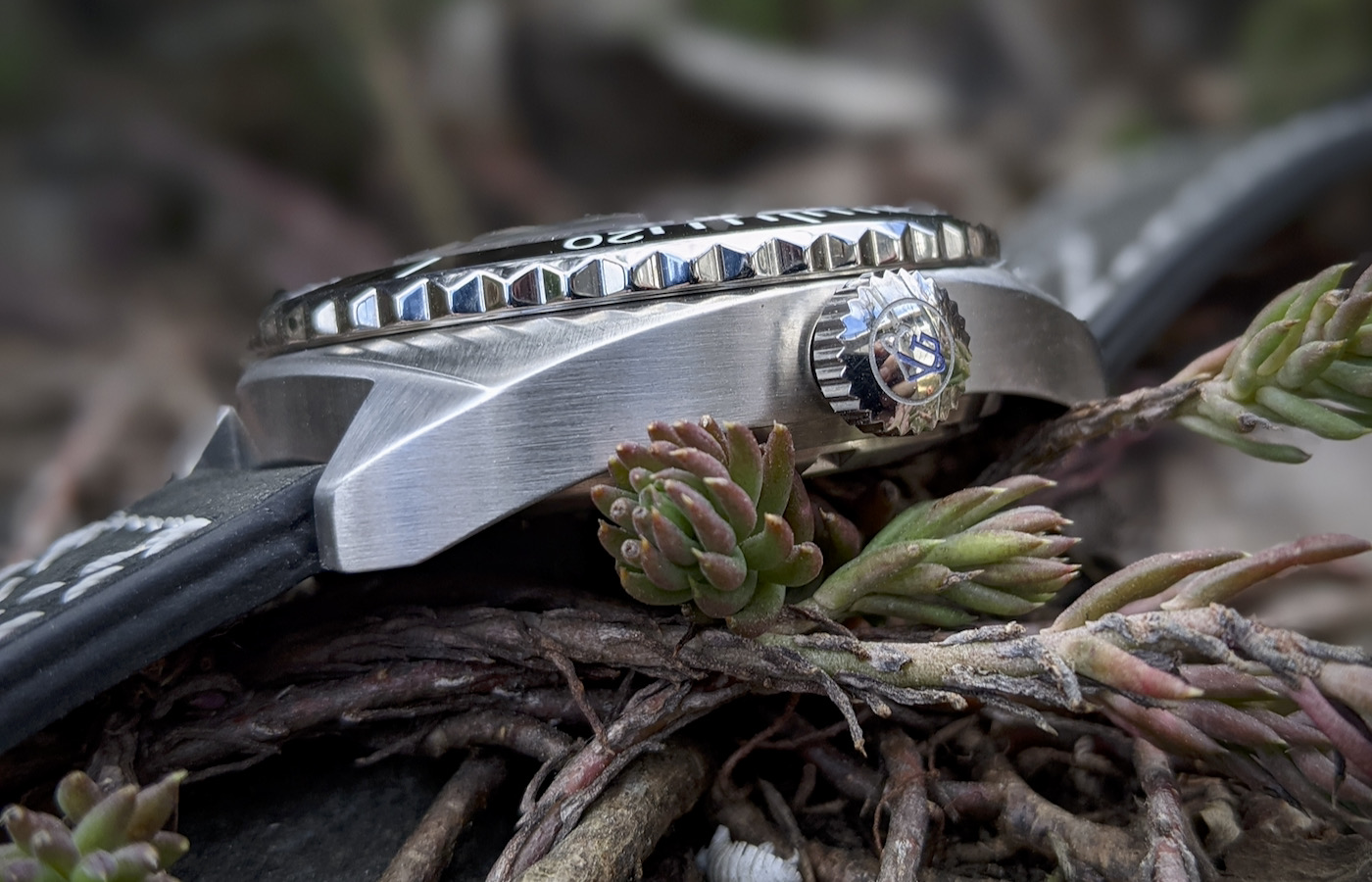 One of my favorite elements on this watch is the high contrast between the white dial and black sapphire bezel. As a bonus, the bezel markers are fully lumed. This was a nice surprise, as I was initially disappointed by the lack of lume pip. That said, the “60” in lieu of a lume pip takes a bit of getting used to and is an element that I’m still not sure I love. It is a unique touch, so I’ll take it. Unlike the brushed finish on the case, the 120-click bezel has a high polish finish that’s rather difficult to grip, especially as the bezel is slightly inset from the case (rather than overhanging) and the action is quite firm. It’s not a major issue, but worth noting, especially if you plan to take the Enigma diving. 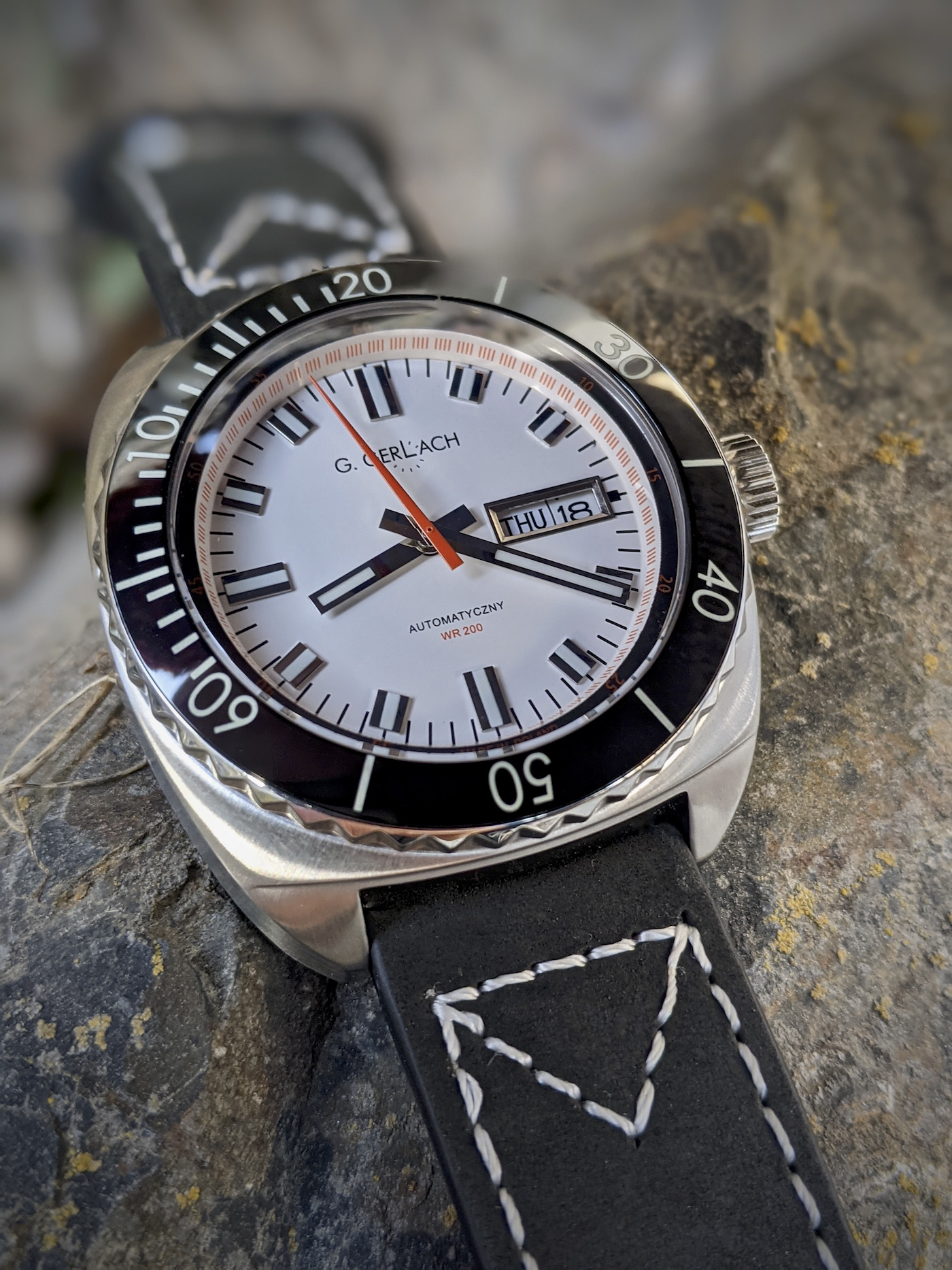 The Enigma II comes in two dial variations, black and white. White dial divers seem to be having their moment, with the extreme popularity (hype) of the white dial Omega Seamaster Professional 300m and the Rolex “Polar” Explorer II. Sure, the latter’s not a dive watch, per se, but I’d be remiss not to mention it given the orange pops on a white dial. Now, the Seamaster and Explorer II are more than an order of magnitude more expensive than the Enigma, so to some extent comparisons are unfair. However, there is one design element that I wish the Enigma had adopted – the black surrounds on the hands and markers that make the Seamaster and Explorer II absurdly legible. Unfortunately, the polished applied markers and polished hands, while attractive, do the Enigma no favors in the legibility department. It’s not terrible, but it can take your eyes a second to adjust and read the time in low light. My point is just that an Enigma III with black markers and hands would be amazing… 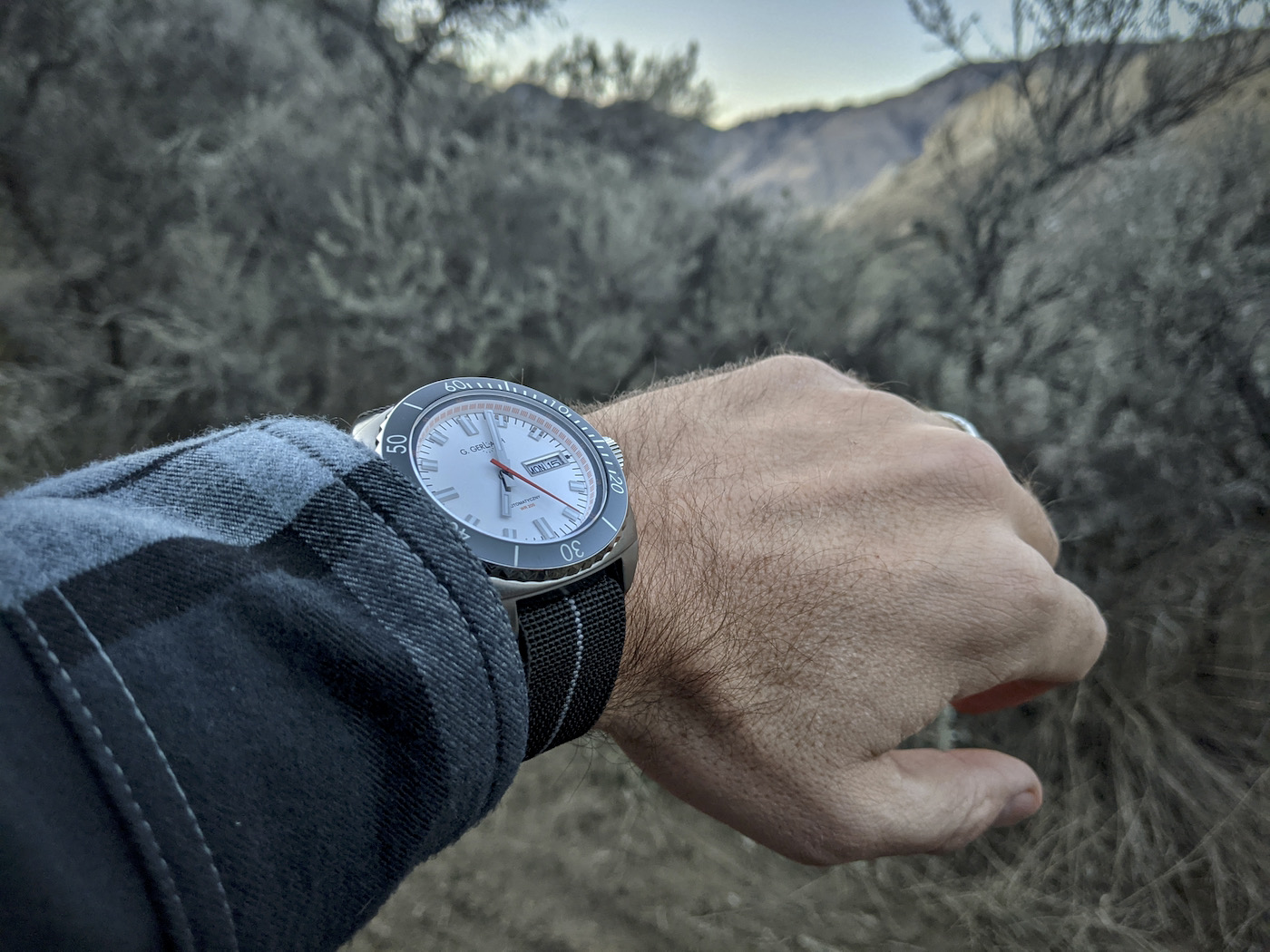 One element that’s easy to overlook, but showcases the brand’s attention to the little details is the rehaut. Most watches use a simple brushed rehaut to transition between the dial and crystal, but G. Gerlach adopted a white rehaut with orange hashes to match the dial accents. You might not notice the rehaut by looking at the watch straight on, but as soon as you view the dial at an angle, those orange hashes pop. It’s a little touch that makes a big difference. 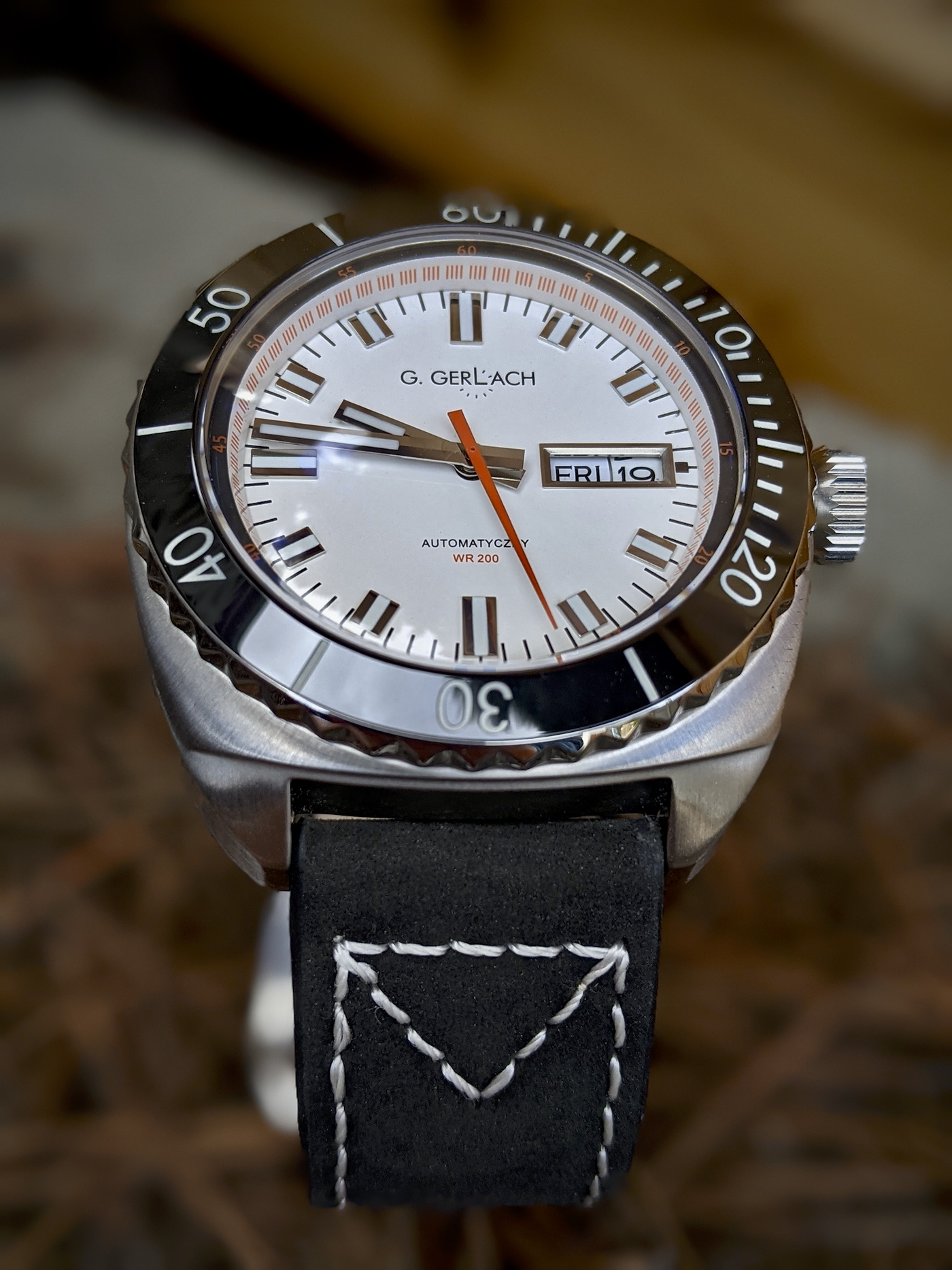 The watch I’m reviewing came mounted on a thick black leather strap with contrast white stitching. It’s comfortable and works fine with the watch, but I found a black Erika’s Originals strap to be my favorite combination. That said, a rubber isofrane-style strap or NATO-style strap would also be excellent options. 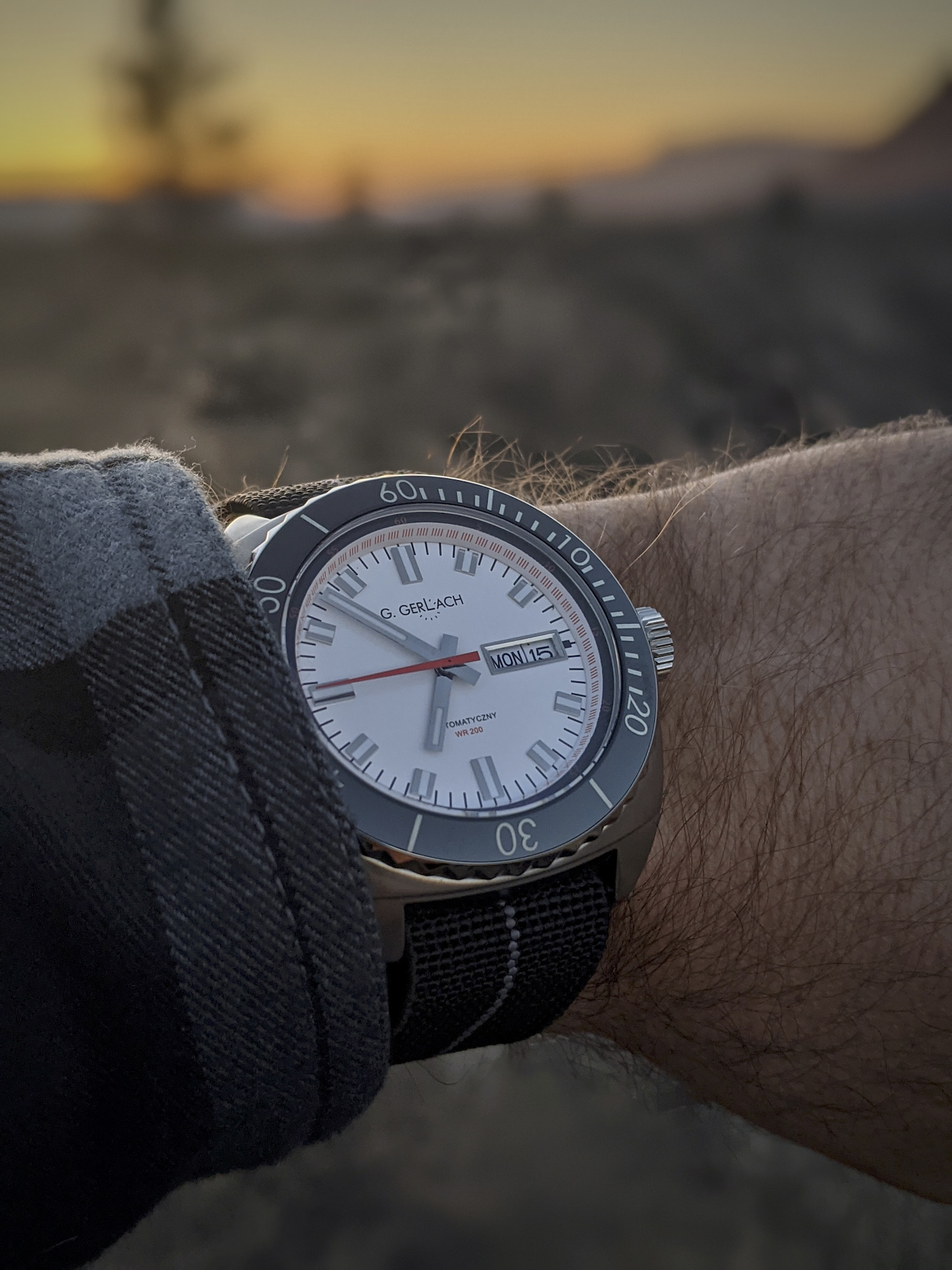 Powering the Enigma II is the Seiko NH36 automatic movement — equivalent to the 4R36 movement found in Seiko’s self-branded watches. Aside from hours/minutes/seconds functionality, the NH36 also features day and date functions, 24 jewels, and a 41-hour power reserve. It’s a quality movement, especially at this price point, but the relatively slow beat rate of 21.6kph may annoy those used to the smoother sweep of say an ETA 2824 or Miyota 9015. Accuracy is a bit of a roll of the device, with static accuracy of -20 to +40 seconds/day. My loaner piece was well within spec, so certainly no issues with the movement from my perspective. 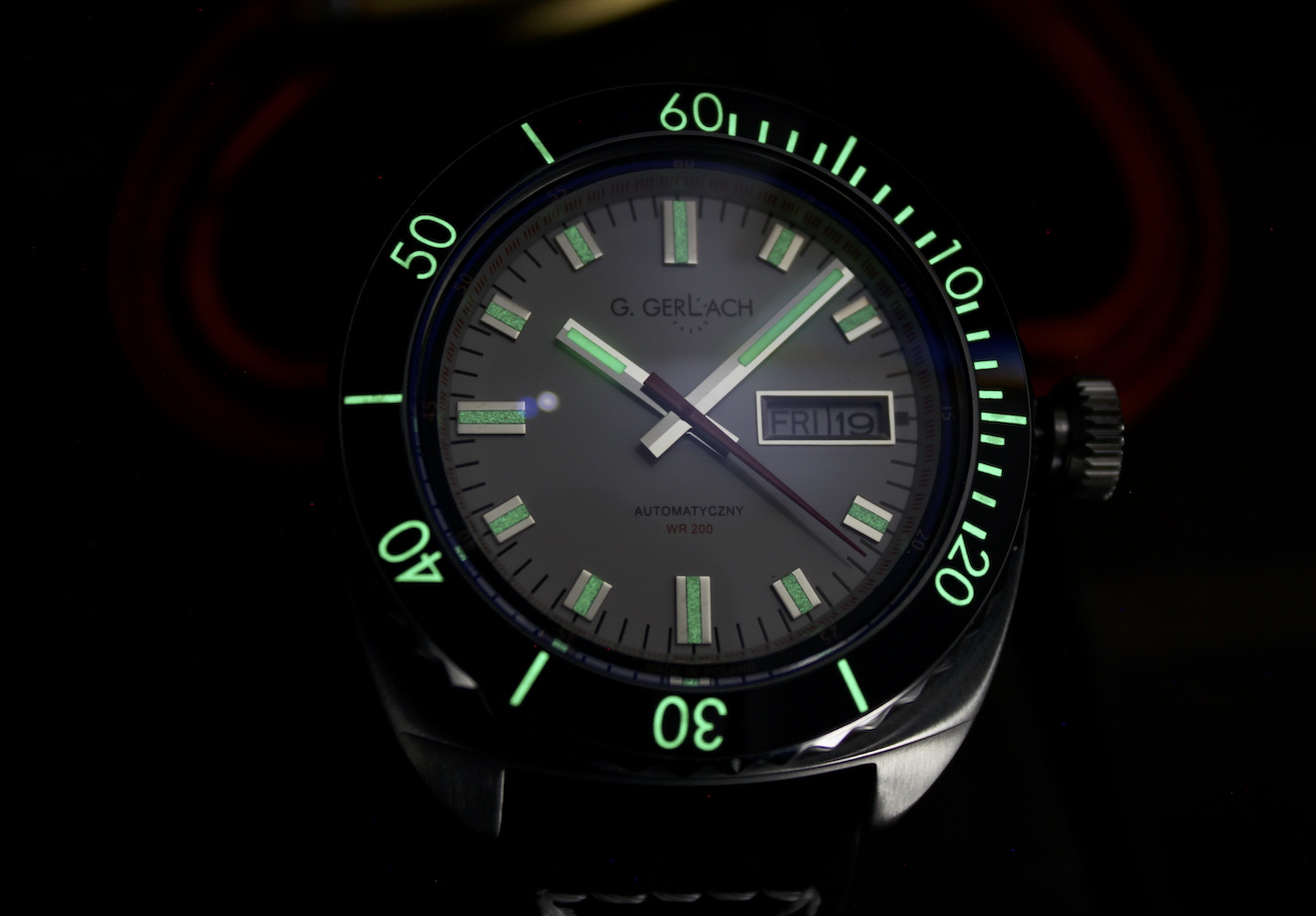 We’re living in a boom time for budget divers. The options available for dive watches in the $300-$500 range are manifold: Seiko, Orient, Citizen, Zelos, Borealis, Spinnaker, Deep Blue, Raven…just to name a few off the top of my head. While specs are certainly important, for me it comes down to the design and the story behind the watch. While we’re used to brands creating a design then manufacturing a story after the fact, G. Gerlach has flipped the script. Their goal is to tell the world about Poland’s rich history, while promoting Polish design and manufacturing — they just happen to use watches as a medium. The G. Gerlach Enigma II comes in at 1,699 PLN (equivalent to roughly $440 USD) on rubber or leather strap, with a mesh bracelet option available for an extra ~$28 USD. For more information on the Enigma II be sure to visit the brand’s website.