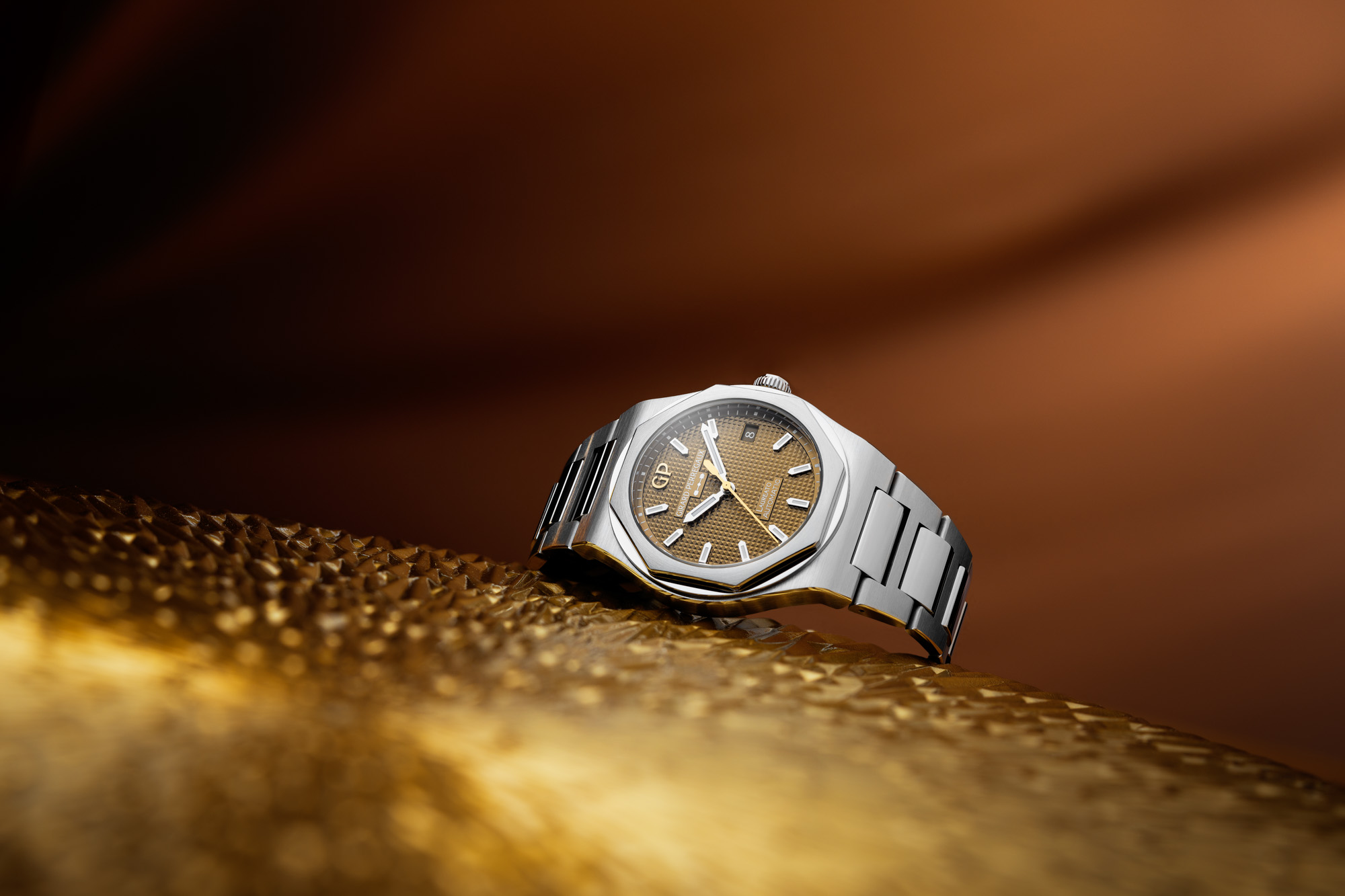 Integrated bracelet sports watches have become one of the cornerstone offerings within the luxury watch industry, and for Girard-Perregaux, it is the Laureato that fills this role within its catalog. Originally launched in 1975, the Laureato arrived during the first wave of integrated bracelet sports watch popularity, and it has been gaining significant traction within the watch-collecting community throughout the last several years, following a relaunch and overhaul of the collection in 2017. For those who are interested in an integrated bracelet luxury sports watch but want something a bit less obvious than the usual over-hyped suspects, the Girard-Perregaux Laureato represents a fantastic alternative. However, just like any other watch with an integrated bracelet, your wrist must be a certain minimum size to comfortably wear the standard Laureato, as there won’t be many strap-changing tricks that can be used to help mitigate its case size. For this reason, there are many collectors (myself included) who prefer the mid-size versions of most integrated bracelet watches, simply because they fit better on the wrist and let you show off more of the bracelet, which is often an equally important part of the watch’s overall design. Joining the lineup for 2022 is the Girard-Perregaux Laureato 38mm Copper, which reintroduces the popular midsize format to the Laureato collection with a stainless steel case and integrated bracelet paired with a metallic copper dial. 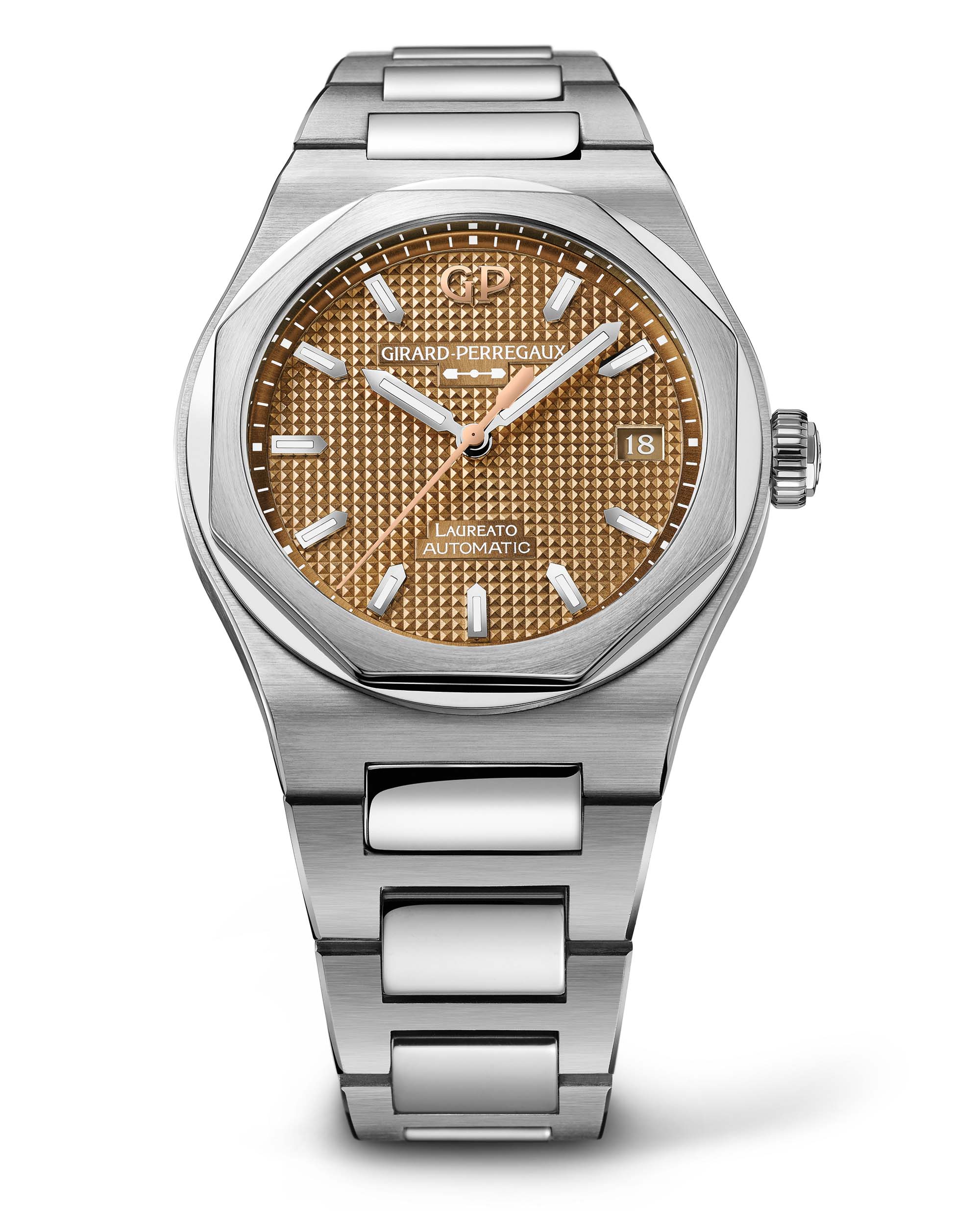 As its name suggests, the Girard-Perregaux Laureato 38mm Copper features a case that measures 38mm in diameter, and at just under 10mm-thick, it is also thinner than the standard 42mm model, which comes in at 10.68mm. Crafted entirely from stainless steel, the design of the case follows the same overall blueprint that can be found throughout the rest of the contemporary range, which incorporates multiple different stacked geometric shapes. Sitting on top of an angular tonneau-shaped case is a thin circular ring with an octagonal bezel completing the top of the watch. Protecting the dial side of the Laureato is a flat anti-reflective sapphire crystal, while a display caseback attached by six screws works together with the signed screw-down winding crown to help provide users with 100 meters of water resistance. Attached to the case of the Girard-Perregaux Laureato 38mm Copper is the same style of H-link bracelet that you will find on the full-size model, which features brushed and polished surfaces and gives the new 38mm model the same overall appearance as both its larger and smaller Laureato siblings. 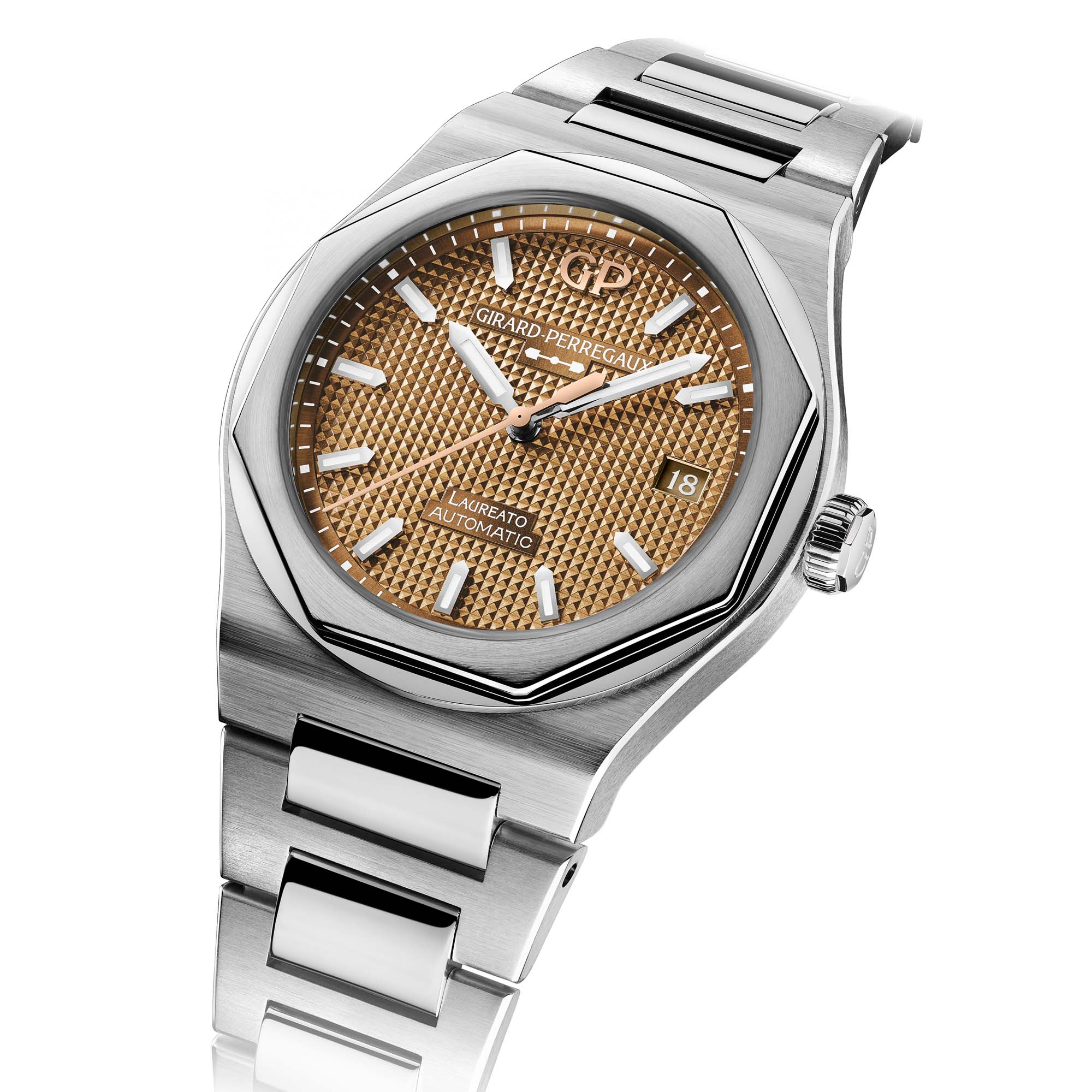 Just like the case size of the watch, the dial of the Girard-Perregaux Laureato 38mm Copper is also indicated by its name, and sitting under the sapphire crystal is a copper-colored dial that features a “Clous de Paris” pattern with a metallic sunray finish. Rhodium-plated baton-style indexes serve as the hour markers, while a date window sits at the 3 o’clock location and displays its values with a color-matched calendar disc. Surrounding the periphery of the dial is a slightly raised chapter ring that contains the minute track printed in white with slightly thicker print used to indicate each of the five-minute markers. The time itself is indicated by the trio of centrally-mounted baton-style hands, and both the hour markers and hands are finished with white-emission luminous material for added legibility in the dark. As a subtle warm contrast against the stainless steel case and copper-colored dial, both the seconds hand and the applied “GP” logo on the dial are plated in gold to create a subtle tone-on-tone aesthetic. 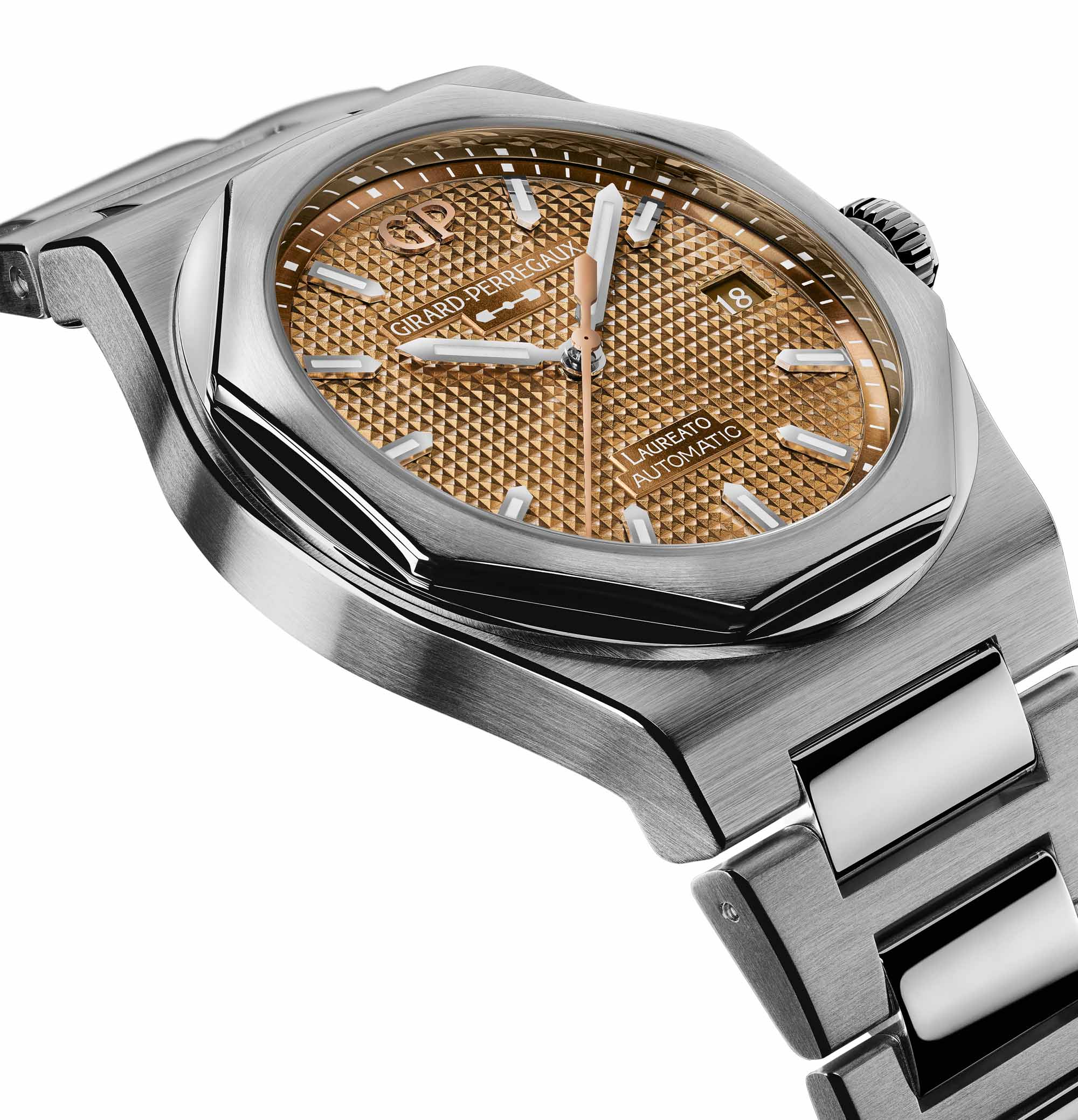 Powering the new Girard-Perregaux Laureato 38mm Copper is the brand’s in-house Caliber GP03300 self-winding movement. Consisting of 218 individual components and running at a frequency of 28,800vph, the 27-jewel Caliber GP03300 offers users an approximate power reserve of 46 hours, and it is nicely decorated with a variety of different traditional finishing techniques. Some components feature up to four different decorative methods, including beveling, mirror polishing, snailing, satin finishing, sunray patterning, and various other types of engravings. The various plates and bridges of the movement are decorated with straight Geneva stripes, while its solid 18k pink gold oscillating weight receives circular Geneva stripes that contour to the rotor’s natural shape and create additional contrast with the linear patterns adorning the bridges below. 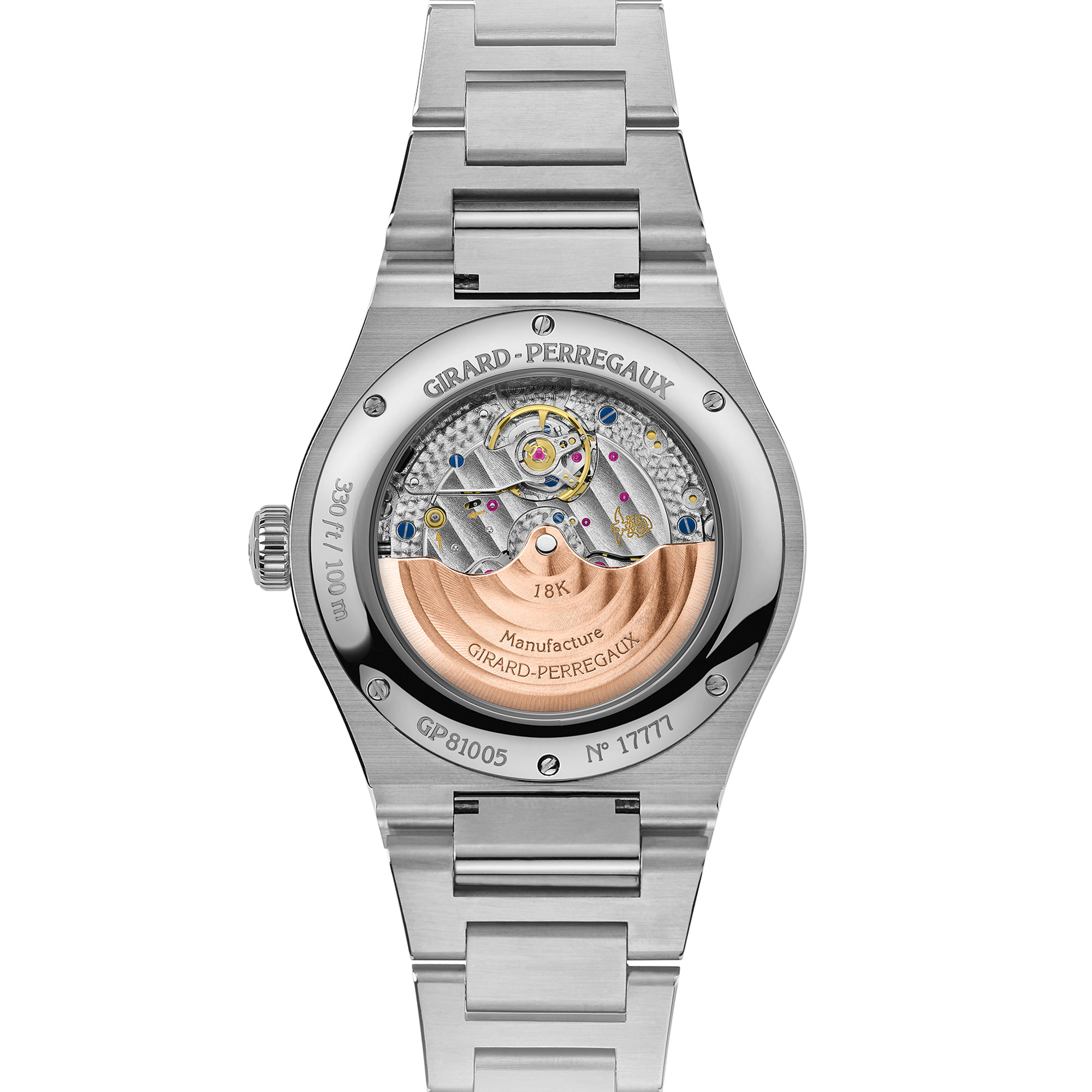 The midsize case option is often considered to be the “Goldilocks” size for a lot of watch collectors — even for those with wrists that are large enough to wear the full-size model. While the 42mm Laureato is a bit too big for some and the 34mm is just too much of a step in the opposite direction and ends up being a bit too small, 38mm is considered to be somewhat of a sweet spot for most wrist sizes, and the fact that the new Laureato 38mm Copper is available in stainless steel rather than exclusively crafted from solid gold means that it will be significantly more accessible to potential buyers. With an official retail price of $14,900 USD, the Girard-Perregaux Laureato 38mm Copper is quite a bit more affordable than some of the more well-known integrated bracelet sports watches within the industry, and rather than being a modern creation intended to capitalize on the present-day popularity of integrated bracelets, the Laureato can trace its origins back to 1975, making it one year older than even the Patek Philippe Nautilus. While a copper dial in a stainless steel case may not be everyone’s preferred configuration, the new 38mm case size is inevitably going to be expanded to include other dial colors in the near future, opening up the brand’s popular collection of integrated bracelet watches to an even wider range of collectors. For more information, please visit the brand’s website.