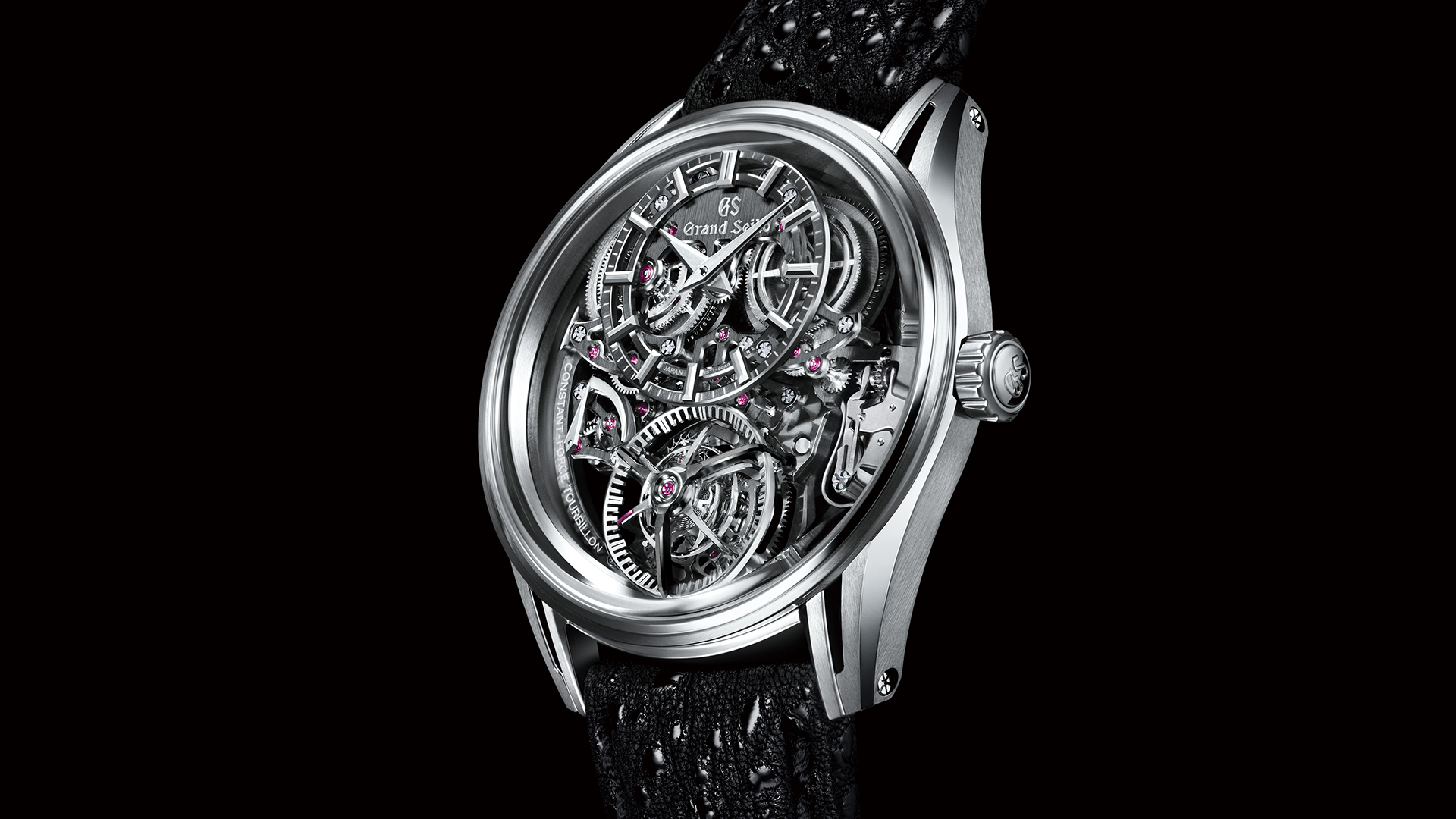 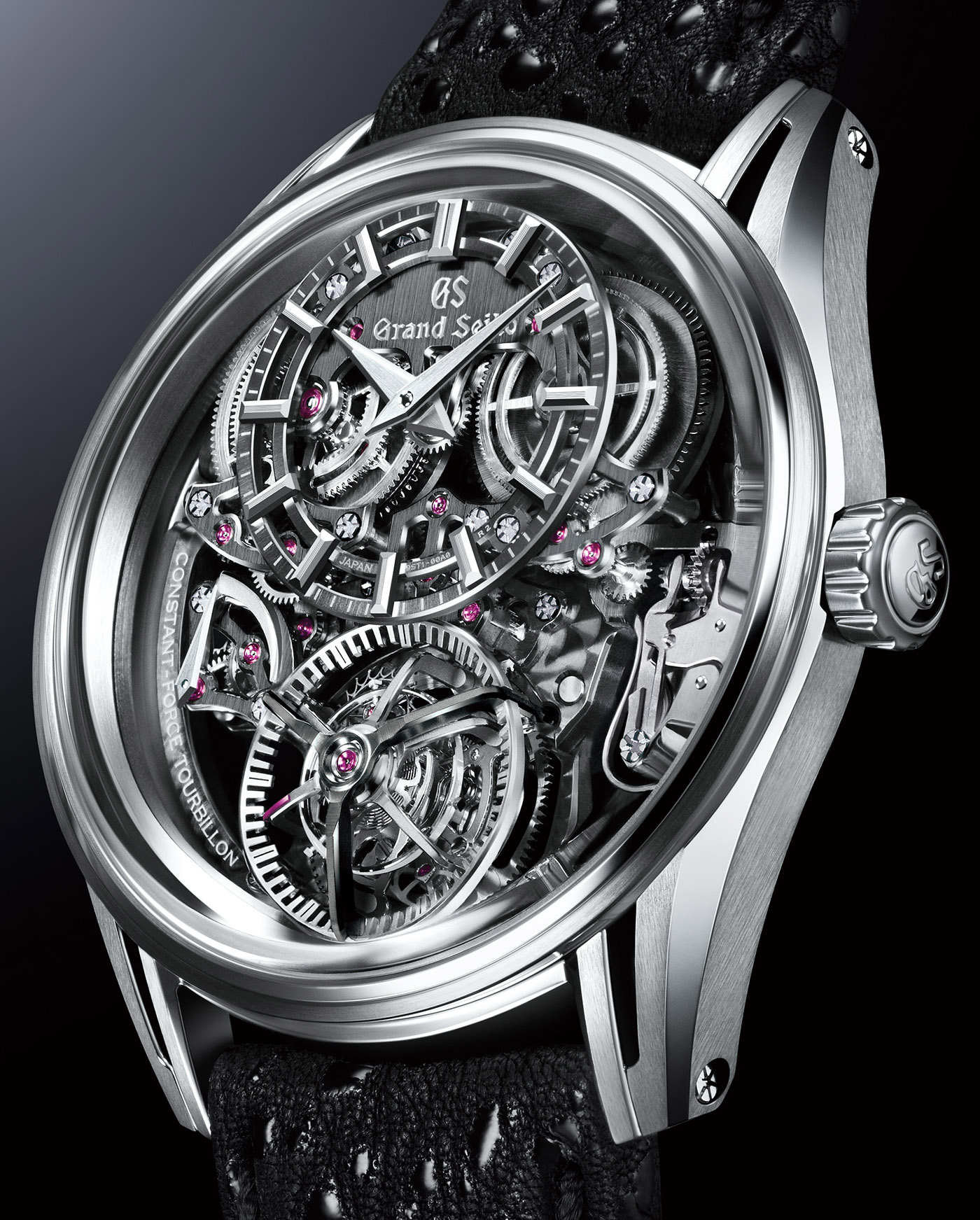 When Grand Seiko first announced its T0 constant force tourbillon concept movement in 2020, it immediately caused a stir in the enthusiast community despite not being fitted to a watch. Not only was this Grand Seiko’s first-ever tourbillon, it was also the brand’s first constant force mechanism, and the first movement in the world to combine the two escapement concepts into a single element. The T0 was a quantum leap in mechanical horology from a brand that routinely pushes the envelope of movement technology, and it immediately bred speculation as to when this avant-garde design would make its way into a wearable timepiece. As part of its Watches and Wonders 2022 novelties, the Japanese brand has finally answered this enduring question, with a dramatic execution that evolves on the original T0 concept while refining its presentation in nearly every way. Not only is the limited edition Grand Seiko Kodo Constant-Force Tourbillon a masterful showcase of horological prowess, despite its intricacy it maintains the brand’s proudly Japanese design sensibilities and visual hallmarks. 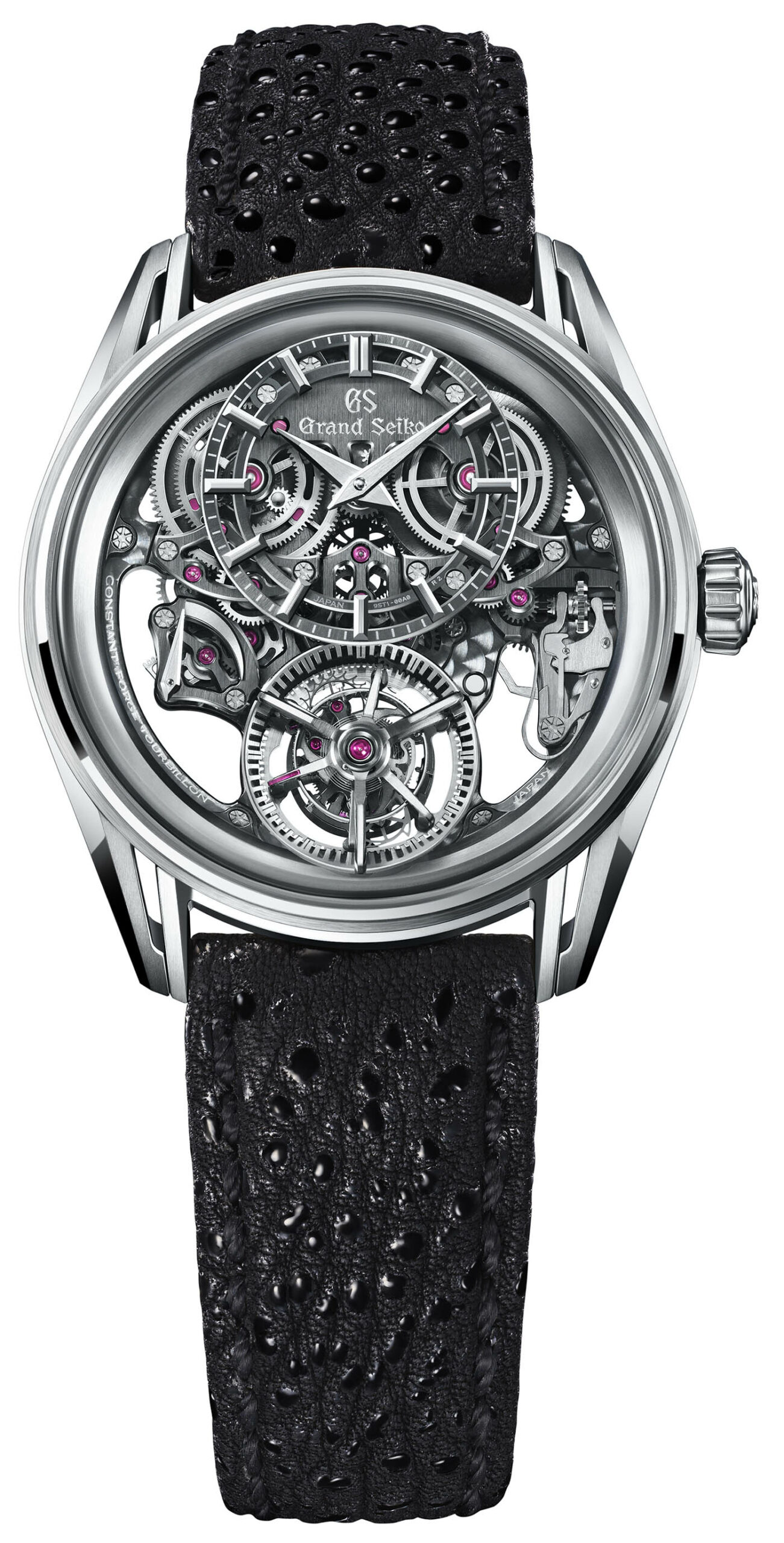 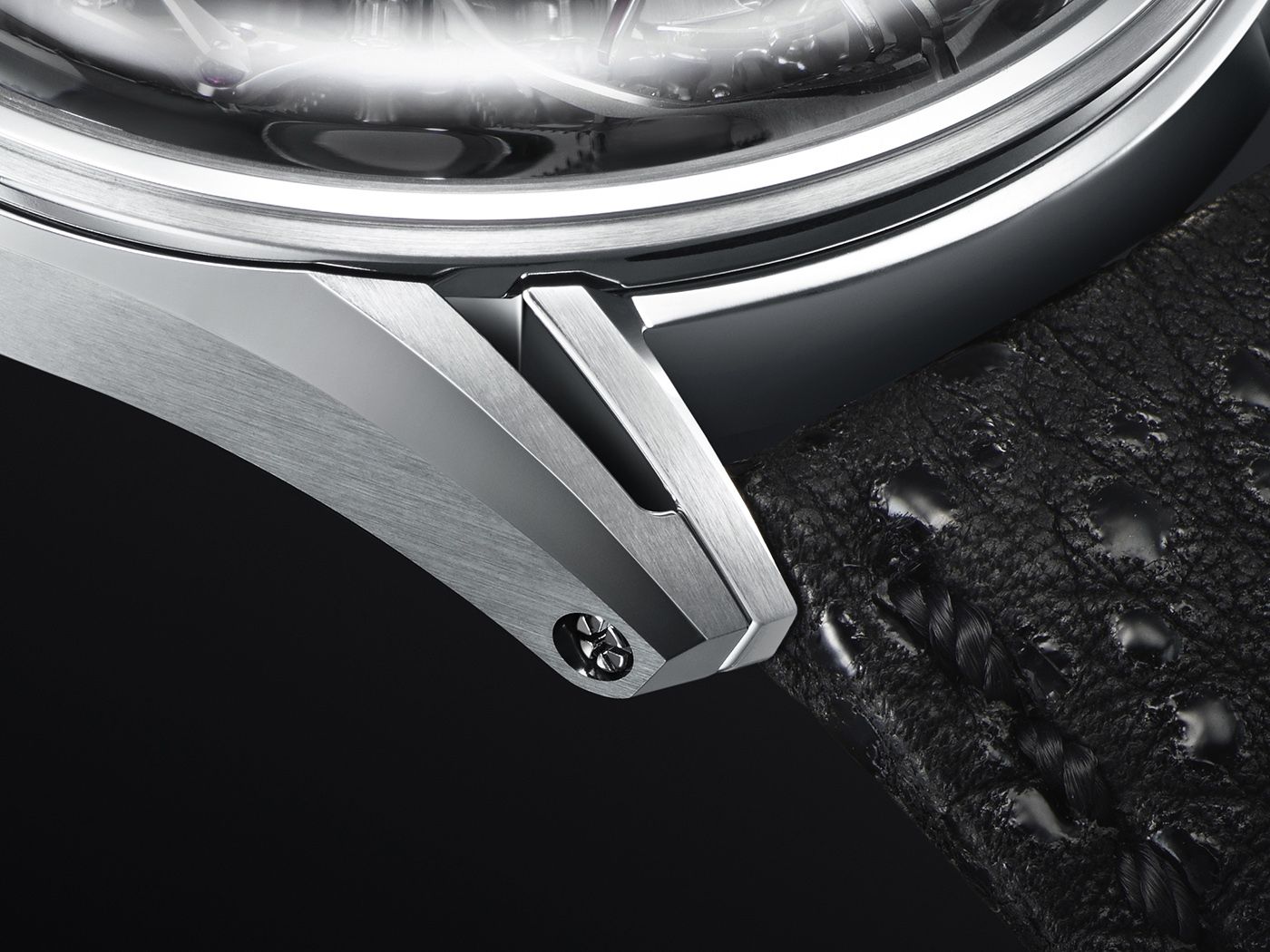 Forged in a blend of 950 platinum and the brand’s proprietary Brilliant Hard Titanium alloy, the Grand Seiko Kodo Constant-Force Tourbillon’s 43.8mm case takes a futuristic, layered approach to constructing the brand’s archetypical “Grammar of Design” case. The multi-part, two-tone skeletonized construction may obscure the lines somewhat in images, but on close inspection the sharp sword-tip lugs, elegantly narrow polished bezel, and broad flowing Zaratsu polished case side chamfers are pure traditional Grand Seiko motifs, translated into the high-impact language of ultramodern haute horlogerie. Despite the skeletonized flourishes and two-tone finishing, the case design is still remarkably reserved compared to the intricate layout within, keeping visual focus squarely on the dial in initial images. Although this case bears all the hallmarks of a delicate ultra-high-end design, Grand Seiko claims this watch is focused on daily wearability, and rates the Kodo Constant-Force Tourbillon for an impressive 100 meters of water resistance. 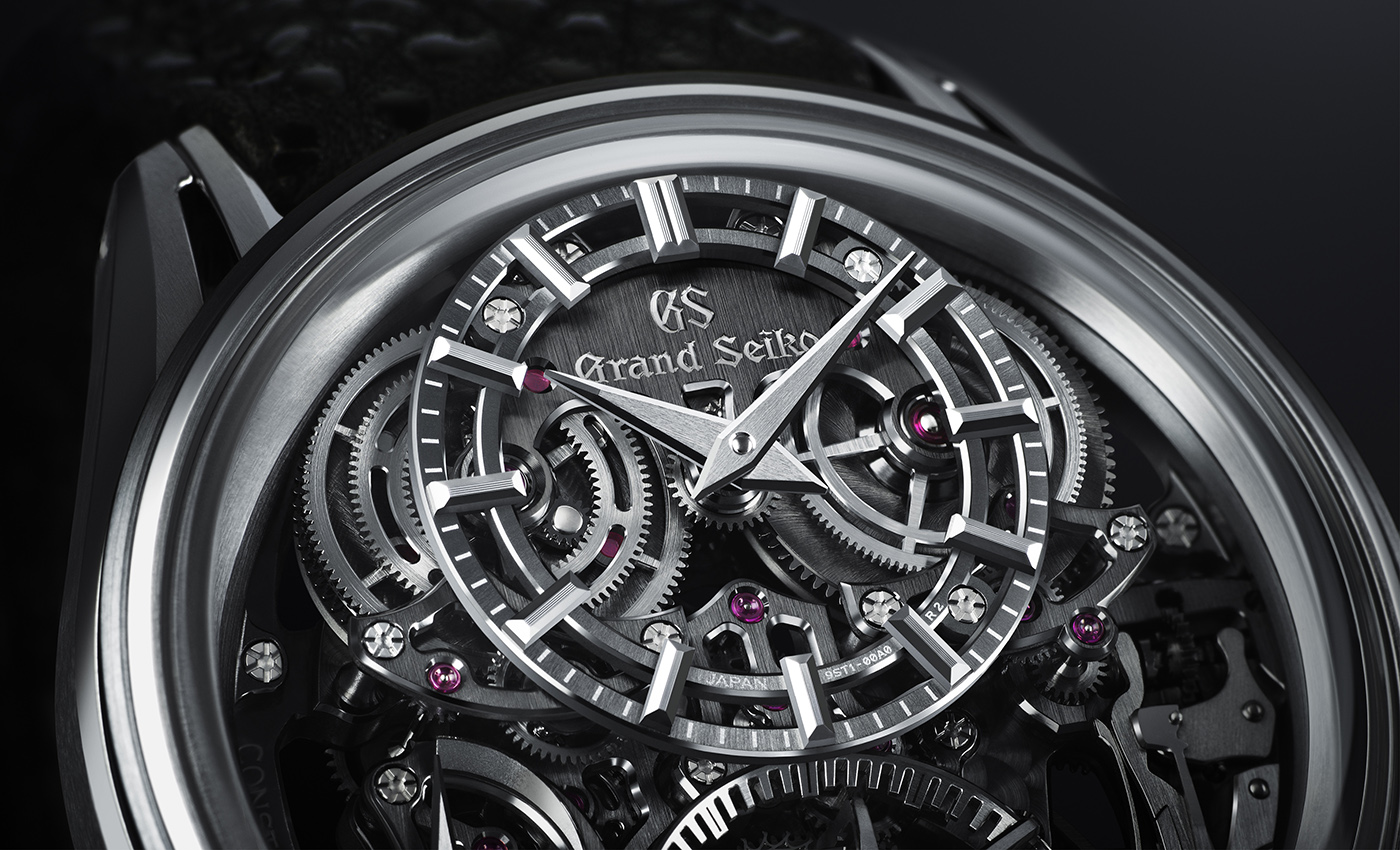 While the fully skeletonized dial of the Grand Seiko Kodo Constant-Force Tourbillon shares a layout with the T0 concept, nearly every aspect of the design has been reworked for greater functionality and to bring the aesthetic in line with Grand Seiko’s DNA in images. The main timekeeping subdial at 12 o’clock is a prime example of this, with the brand’s familiar beveled dauphine hands (with an additional polished facet on the tip of the hour hand to aid legibility) and faceted applied baton indices atop a dramatically skeletonized chapter ring. This aggressive cutaway design allows the subdial to also act as a partial frame for the movement’s artistically arranged gear train and mainspring barrel. At 8 o’clock, Grand Seiko reworks the T0’s minimalist power reserve indicator to a more familiar Grand Seiko-style layout, rotating the assembly 180 degrees and adding another beveled dauphine hand. It’s at 6 o’clock, however, where the Kodo Constant-Force Tourbillon truly sets itself apart. Here, the brand frames its proprietary co-axial constant force tourbillon escapement assembly with an ocean of negative space in images. This unique two-part system should be a mechanical spectacle on the wrist, with the inner tourbillon cage rotating smoothly at eight beats per second while the outer constant force mechanism advances in one-second intervals, creating a rhythmic visual effect that Grand Seiko claims also produces a harmonically tuned audible 16th note at regular intervals. The brand brings immense attention to detail to the finishing of this nesting-doll assembly. This includes a dramatically skeletonized sloping brushed outer minutes scale, Zaratsu polished chamfers along the arms of both the tourbillon cage and the constant force mechanism cage, and a smoothly integrated rectangular ruby embedded along one of the tourbillon cage arms to allow this intricate escapement to be used as a running seconds indicator. 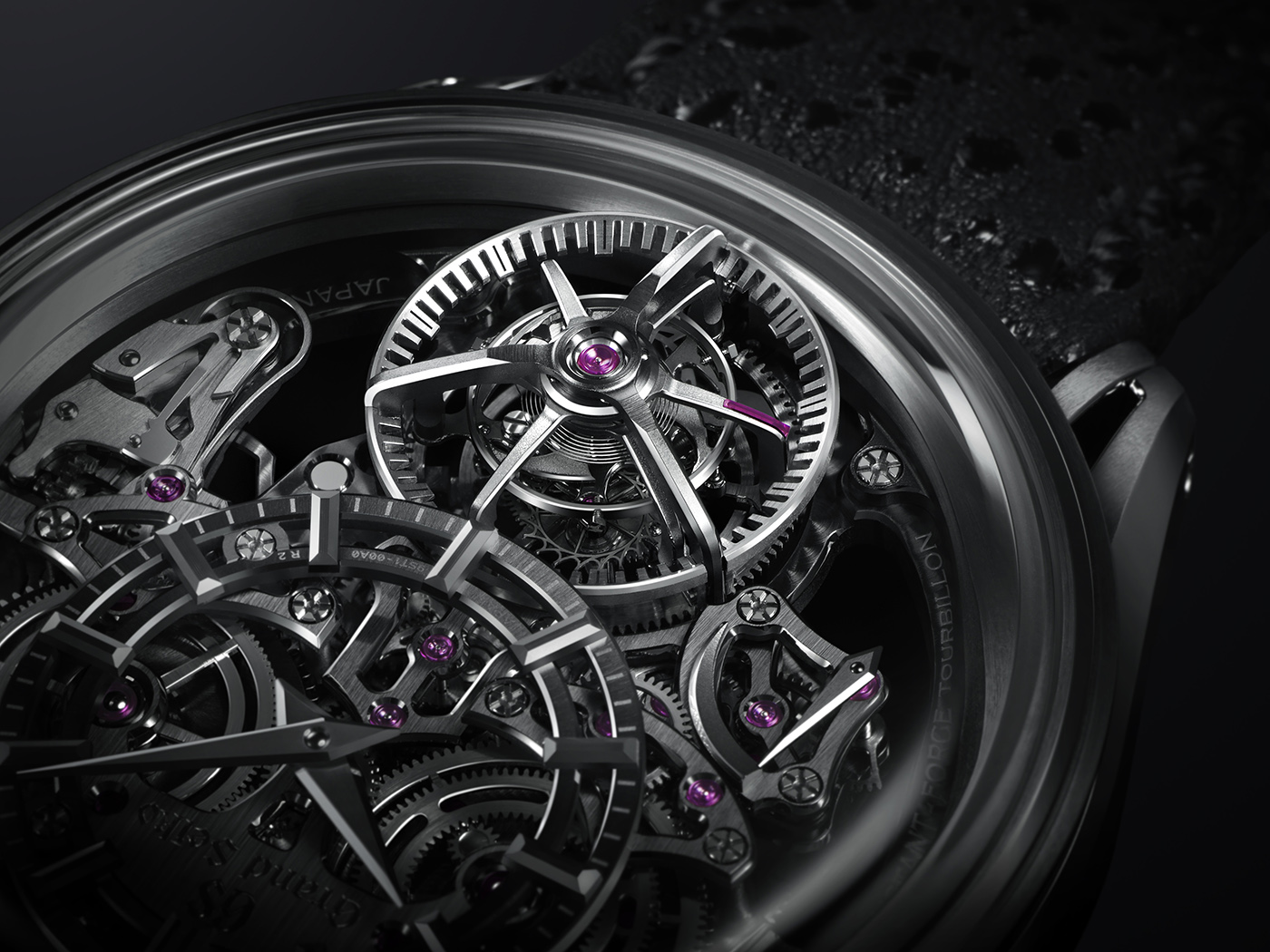 Nearly every component of the in-house Caliber 9ST1 handwound constant force tourbillon movement inside the Grand Seiko Kodo Constant-Force Tourbillon has been refined and reworked from the original T0 concept. The entire movement is noticeably smaller than its predecessor, and its constant-force mechanism has been retuned for greater stability across a wider range of positions. Grand Seiko is thorough in testing the performance of these new movements, subjecting each one made to assessments over 34 days, including 48-hour tests for each of six different positions and three temperature conditions. This meticulous attention shows through in the final performance figures, as Grand Seiko rates the watch at -3/+5 seconds per day in accuracy, and claims a robust power reserve of 72 hours at a 28,800 bph beat rate. The Caliber 9ST1’s finishing is every bit as intricate as its mechanical layout, with a spectacular modernist mélange of radial striping, radial brushing, sunburst finishing, perlage, horizontal brushing, and polished anglage across its dramatically skeletonized components. In order to maintain the brand’s classical Japanese inspiration and visual standards throughout the design, the Grand Seiko Kodo Constant-Force Tourbillon’s black calf leather strap is far from ordinary. Grand Seiko treats this strap with a traditional Japanese Urushi lacquering technique in a similar method to that which was used to craft leather armor pieces for samurai. The end result is a partially glossy, pebbled look in images, adding to the strikingly unique design overall. 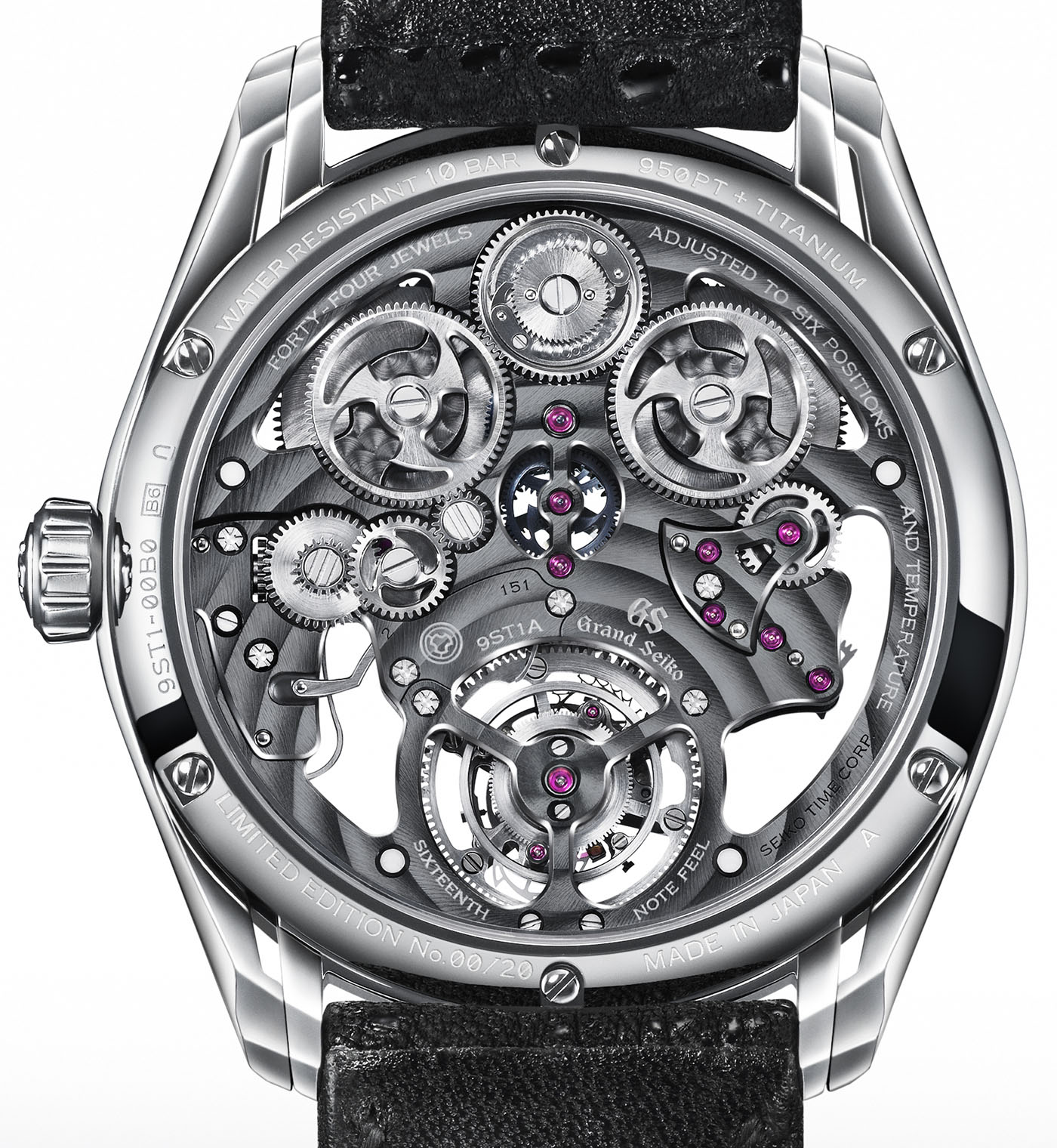