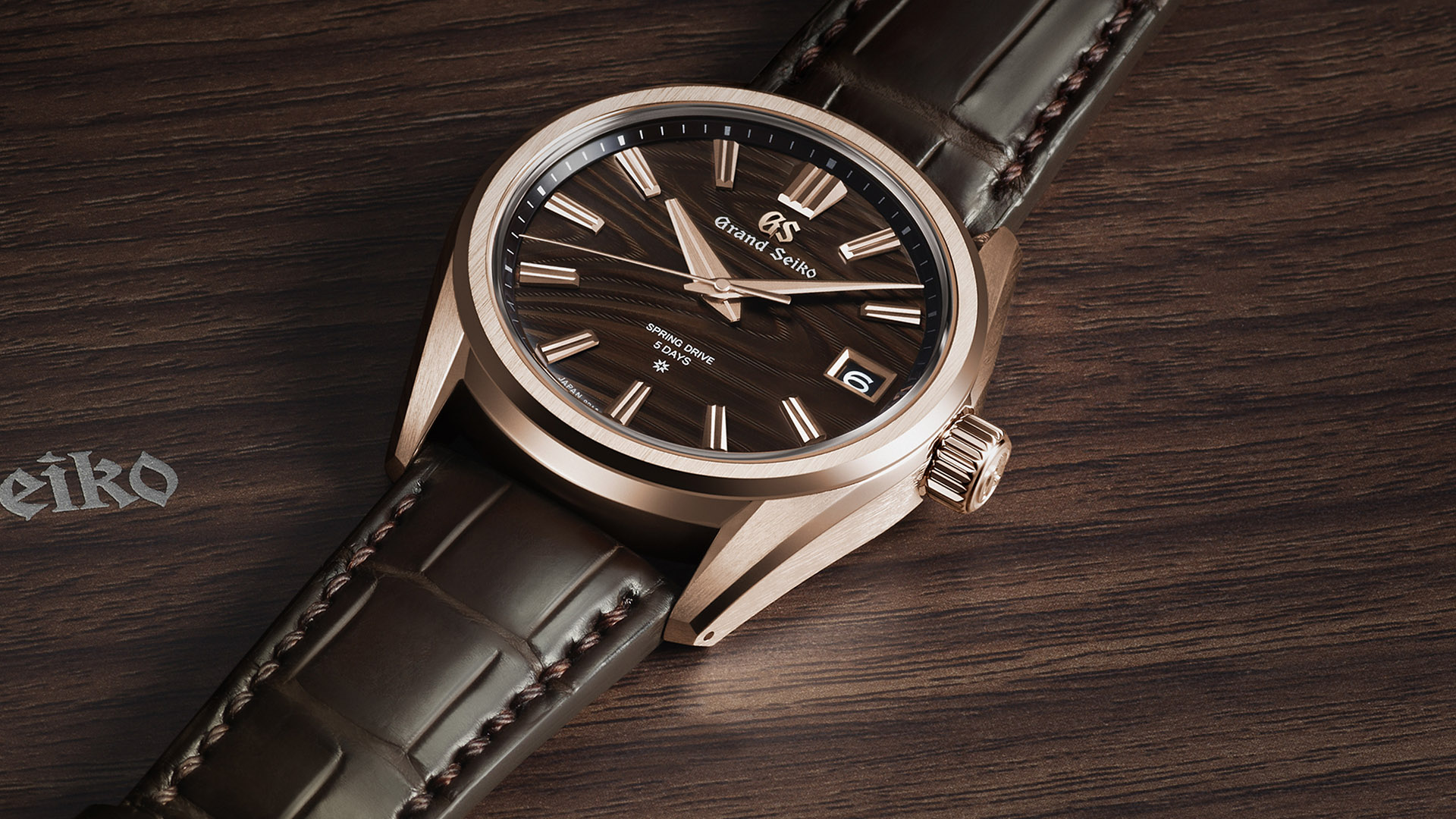 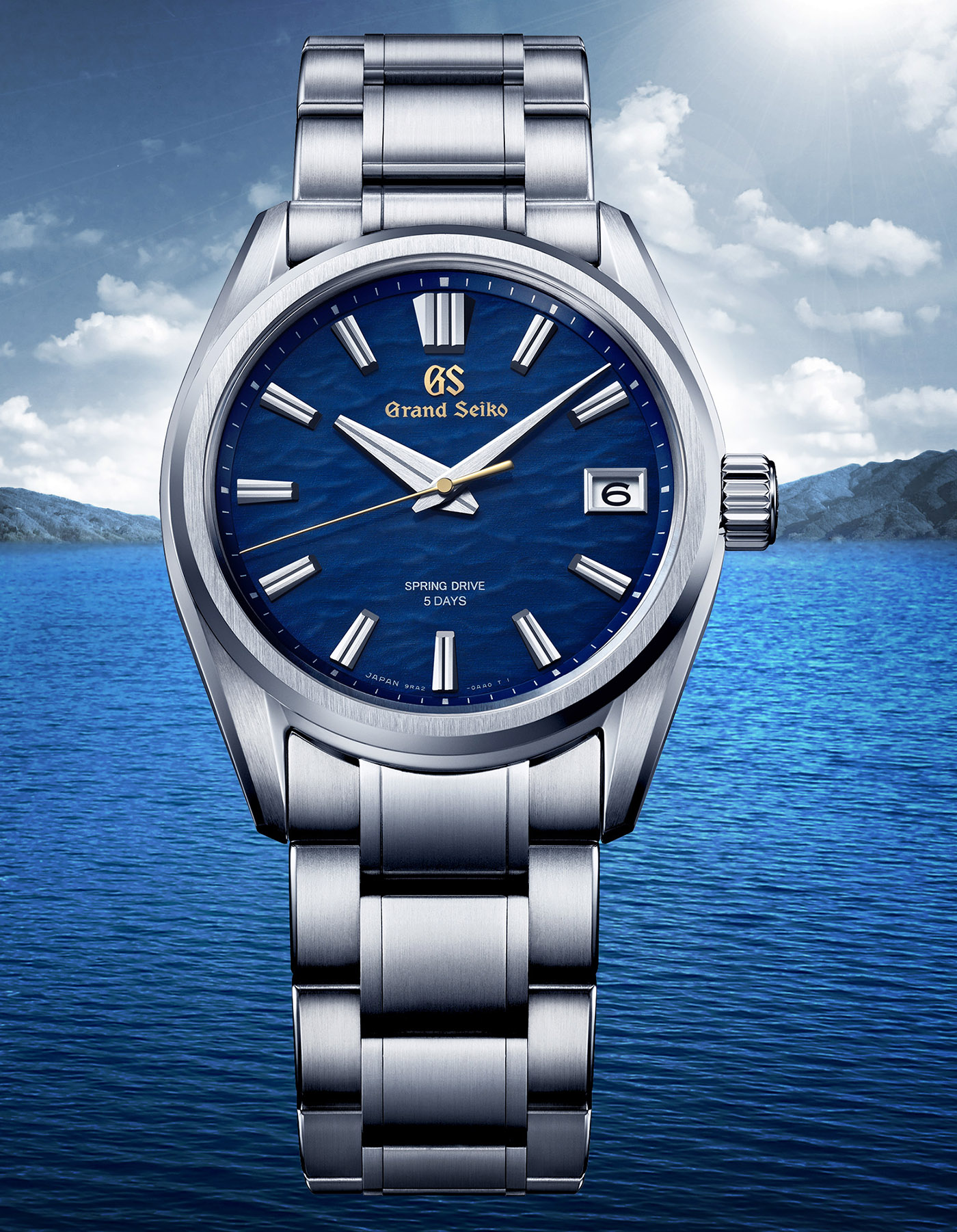 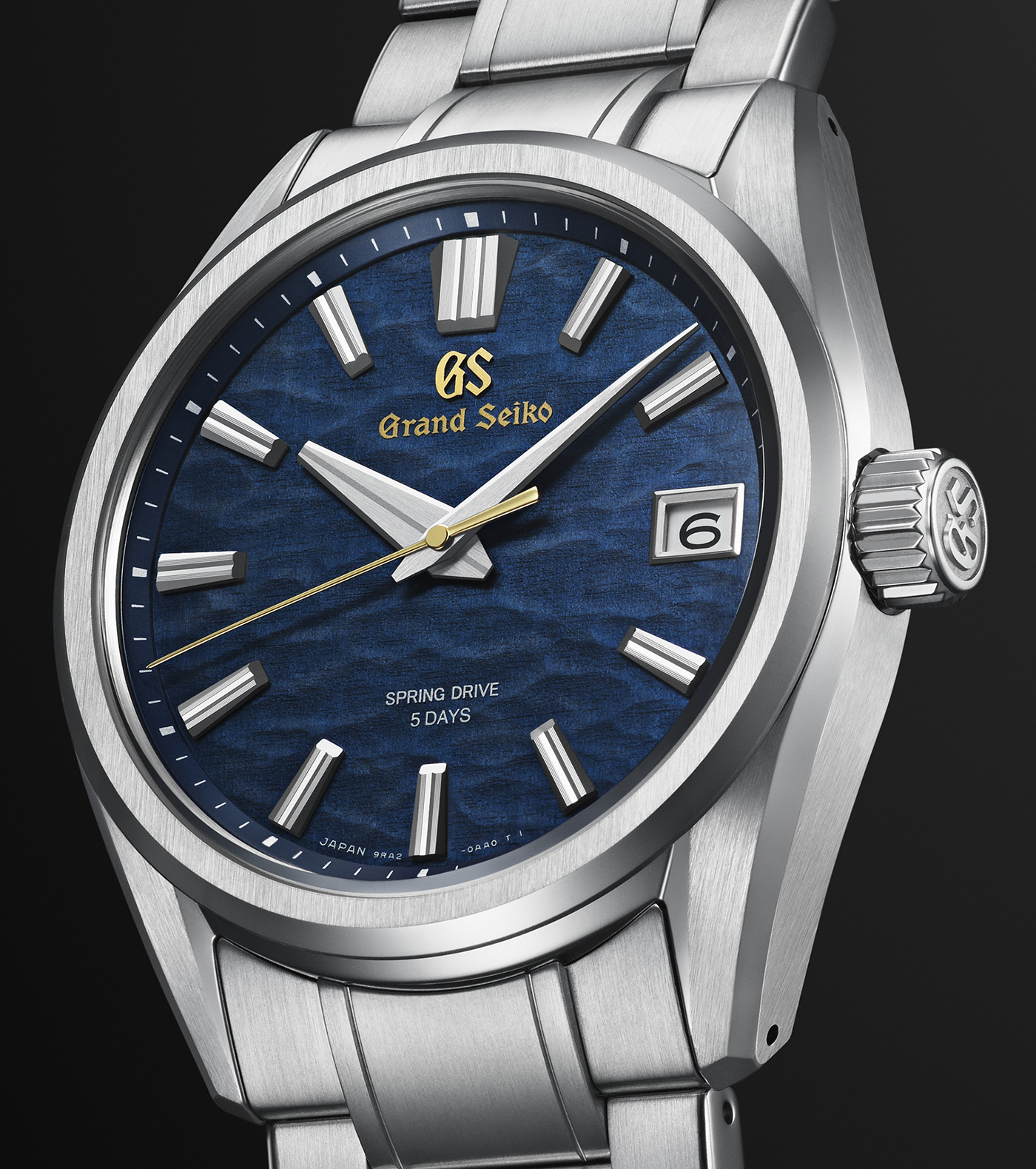 Both the Grand Seiko SLGA007 and the Grand Seiko SLGA008 begin with the brand’s 40mm ‘60s-inspired 44GS case design. Following Grand Seiko’s traditional “Grammar of Design” playbook, these cases are sharply faceted, with long angular lugs and a cleanly chamfered smooth bezel. The Zaratsu polished chamfer running along the case sides gives the design a relatively high visual beltline, but this mirrorlike element, along with the sloping polished sides of the bezel, and the sharp inner lug chamfers should dramatically showcase Grand Seiko’s finishing capabilities. That high beltline may prove divisive, however, as the SLGA007 and SLGA008 are not particularly thin at 11.8mm. Both models also feature sapphire display casebacks, but still offer a solid 100 meters of water resistance. Where the two models begin to diverge is with case material. For the SLGA007, the brand uses classic stainless steel, imbuing the design with a slightly more sporting character in images. The SLGA008, on the other hand, turns to 18K rose gold. This warmer, more luxurious material helps to highlight the vintage-inspired character of the design in images, while visually pushing it firmly into dress watch territory. 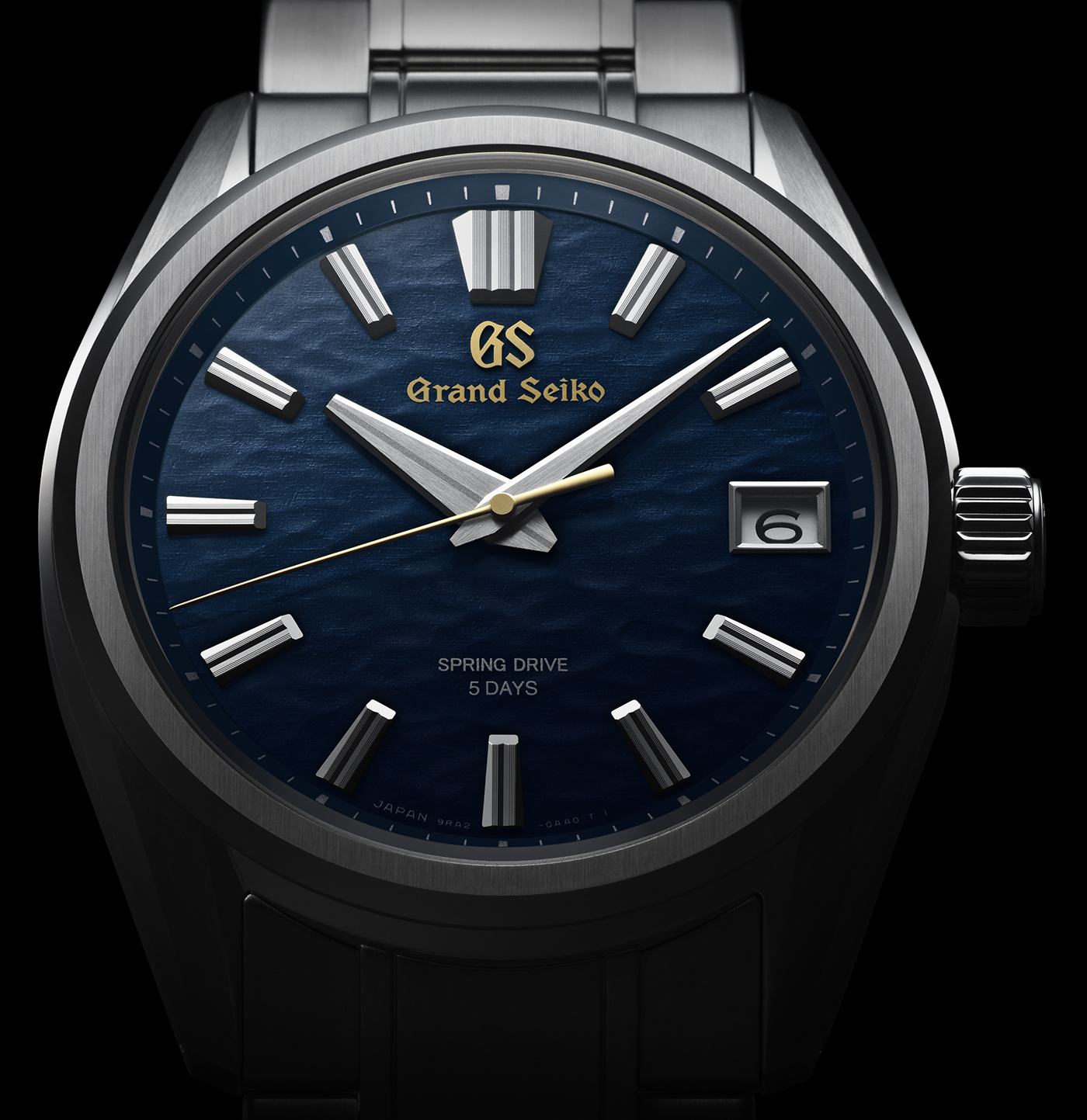 Like so many of Grand Seiko’s current offerings, the dial design of the Grand Seiko SLGA007 aims to evoke the natural landscape surrounding the brand’s Japanese design studio. In this case, the inspiration comes from the peaceful ripples of Lake Suwa, located near Grand Seiko’s Shinshu Watch Studio facility. In order to capture this unique aquatic look, the dial surface begins with a rough, almost linen-like texture, overlaid with a gently waving ripple pattern. The combination of this dynamic surface with the mix of deep sea blues and dark gray lowlights gives a strikingly attractive effect in initial images, while the semi-satin finish gives just enough of a luster to create natural highlights. In contrast to these softly curving natural forms, the blunted dauphine hands and applied indices offer sharp, almost gem-like faceting. The blend of brushed, polished, and grooved surfaces complements the semi-matte dial finish well, creating a wide variety of visual textures in images. The brand also plays with contrasting color here, rendering the seconds hand and the 12 o’clock applied Grand Seiko emblem in yellow gold tone to stand out against the blue backdrop. Although the 3 o’clock date window may be seen as disruptive here by some, the overall proportions of this window and its brightly polished frame are carefully visually counterweighted by the rest of the dial. One element of many previous Spring Drive models that goes absent here, however, is the power reserve indicator. With its new movement, the SLGA007 moves this familiar element to the caseback side for a cleaner, more symmetrical look. 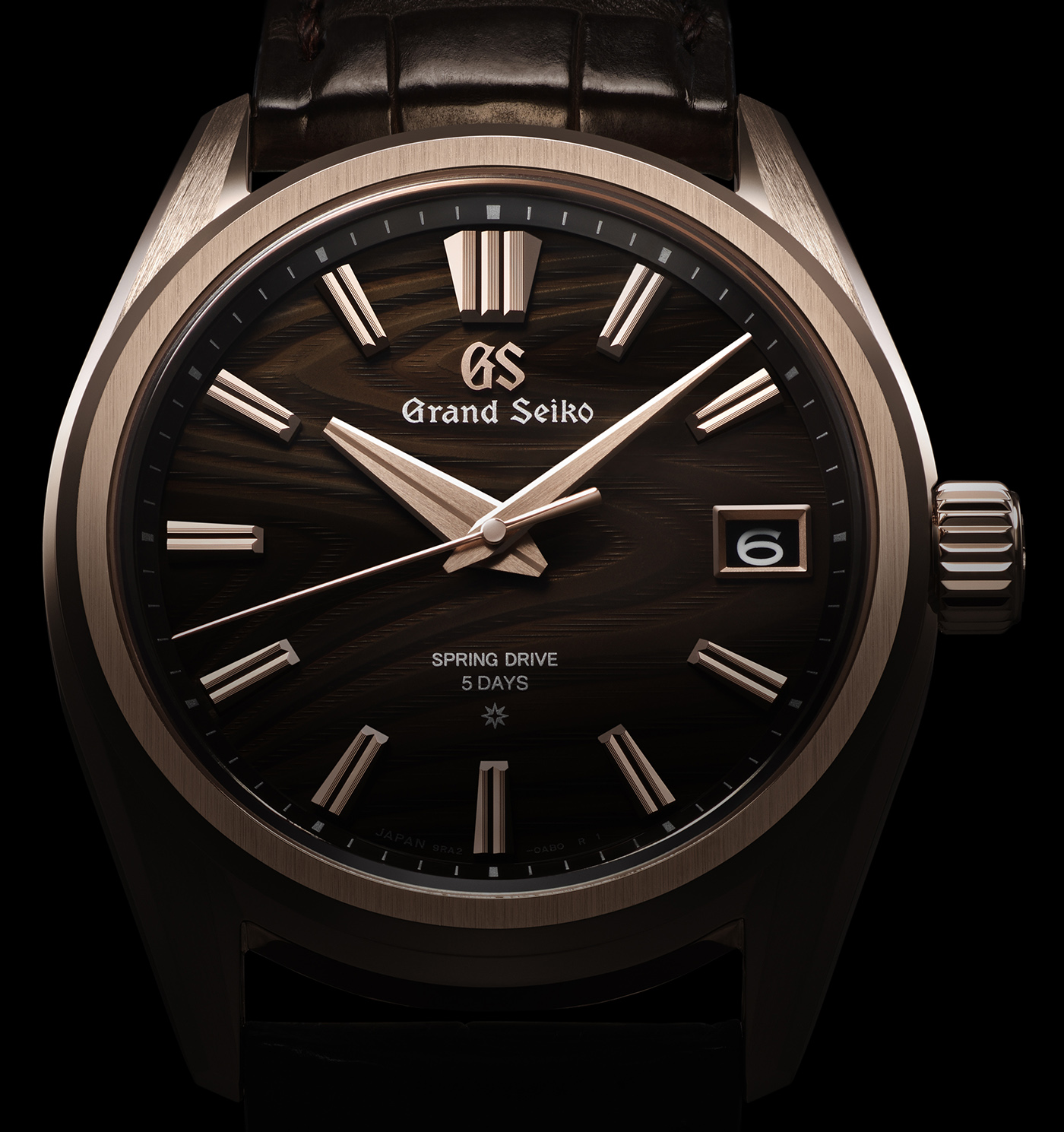 While the dial of the Grand Seiko SLGA007 offers a wholly new dial texture and finish, the Grand Seiko SLGA008 instead reinterprets the “tree ring” motif first introduced in February 2021’s SLGH007. For the SLGA008 however, the brand abandons the piano black dial finish in favor of an earthier, more naturalistic mélange of brown tones ranging from milk chocolate to deep mahogany in images. This change in color dramatically changes the context of the layered, swooping woodgrain-inspired dial pattern, transforming a stylized impressionist texture to something far more visually literal. With the added warmth and color variation, the SLGA008 also gives a greater sense of depth and complexity in initial images. Combined with the rose gold dial hardware, this gives the SLGA008 a more sumptuous, almost ‘70s-esque character than its stablemates. This dial also gains Grand Seiko’s eight-pointed star emblem at 6 o’clock, reserved only for models with hands and indices in precious metal. The 3 o’clock date window features a black date wheel as well, creating far less of a disturbance in overall visual flow than the white date wheel on the SLGA007. 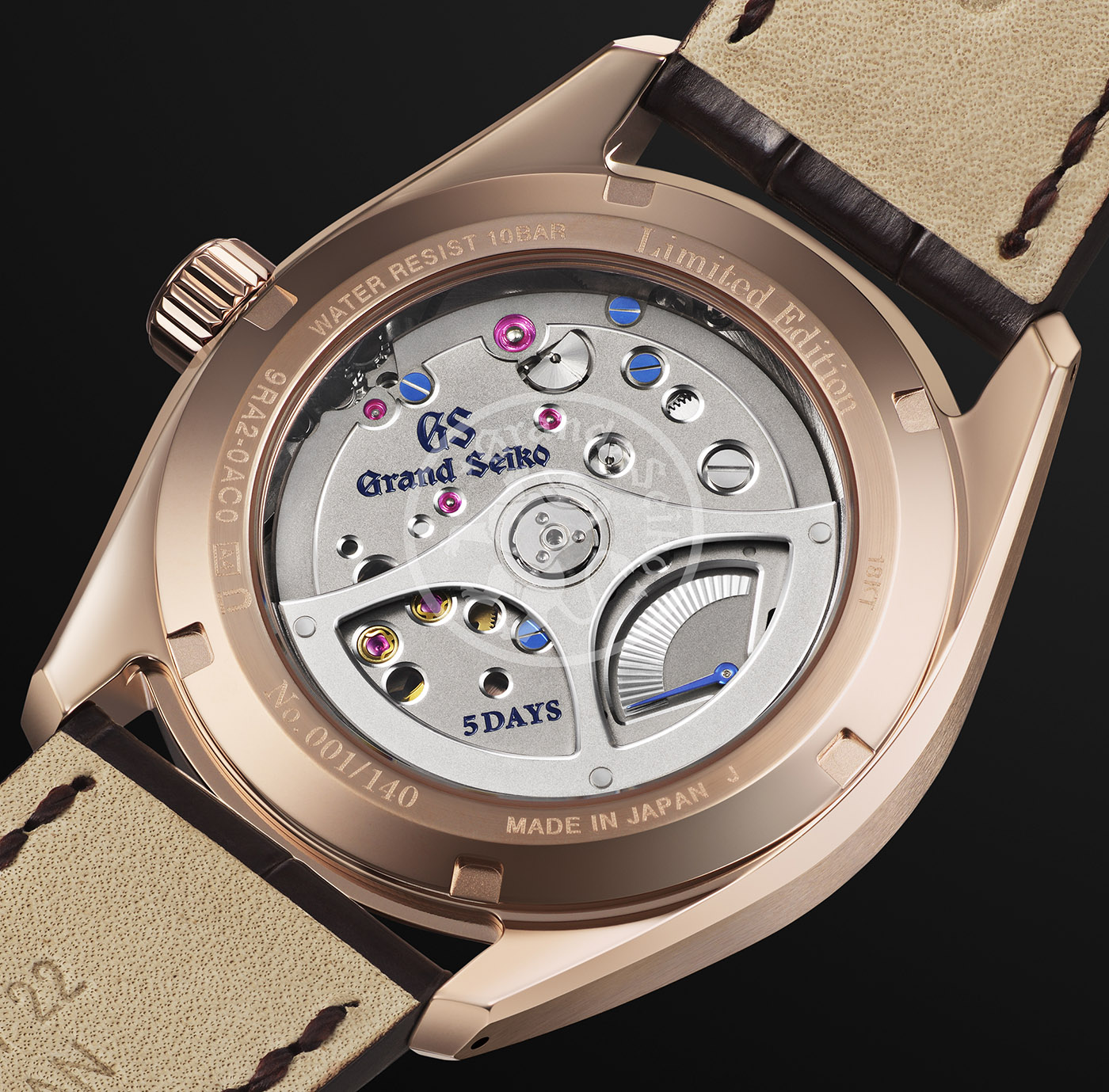 Both the Grand Seiko SLGA007 and the Grand Seiko SLGA008 are powered by Grand Seiko’s new in-house Caliber 9RA2 Spring Drive movement. Based on the Caliber 9RA5 introduced in 2020, the 9RA2 offers the same “best of both worlds” approach with a mechanical base movement paired to a quartz regulator instead of a traditional escapement for greater accuracy. The 9RA2 also uses the line’s signature glide wheel to allow for a truly seamless sweeping seconds hand. The largest changes to the 9RA2 over previous Spring Drive movements come through on the aesthetic side. Rather than ornate striping or perlage, the full baseplate of the 9RA2 instead opts for a simple and serene frosted finish. This more austere and minimal look offers a quintessentially Japanese style in images, with light embellishment in the form of polished sinks and chamfers alongside heat blued screws. The 9RA2’s power reserve indicator also uses a heat blued hand, with the now-famous fluted sweeping texture used by many Spring Drive power reserve indicators. The decision to move this complication to the back of the movement should settle a long-standing debate among Grand Seiko fans, both giving a more symmetrical look to the dial and bringing a more intricately finished highlight to the movement. In terms of performance, like all Spring Drive movements the 9RA2 is immensely accurate, with a stated accuracy of +10/-10 seconds per month and a hefty 120 hour power reserve. 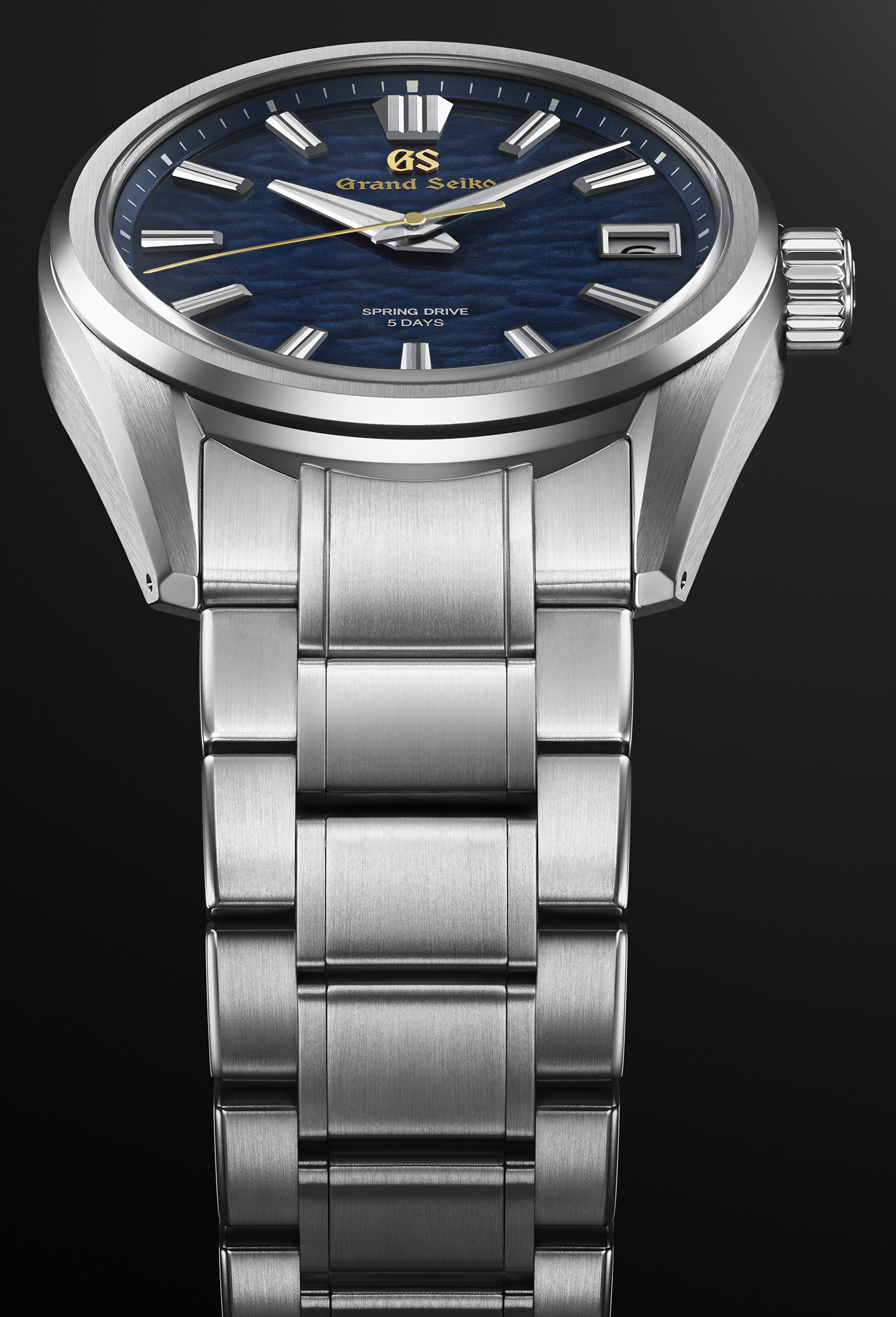 Grand Seiko further separates the SLGA007 and SLGA008 with strap pairings. For the SLGA007, the brand turns to its sporty three link oyster style bracelet with distinctive grooved center links. This stainless steel bracelet further pushes the refined design into sports watch territory visually, striking a visual balance between dress and casual in images. By contrast, the SLGA008 doubles down on its more formal nature with a glossy crocodile leather strap in deep chocolate brown. 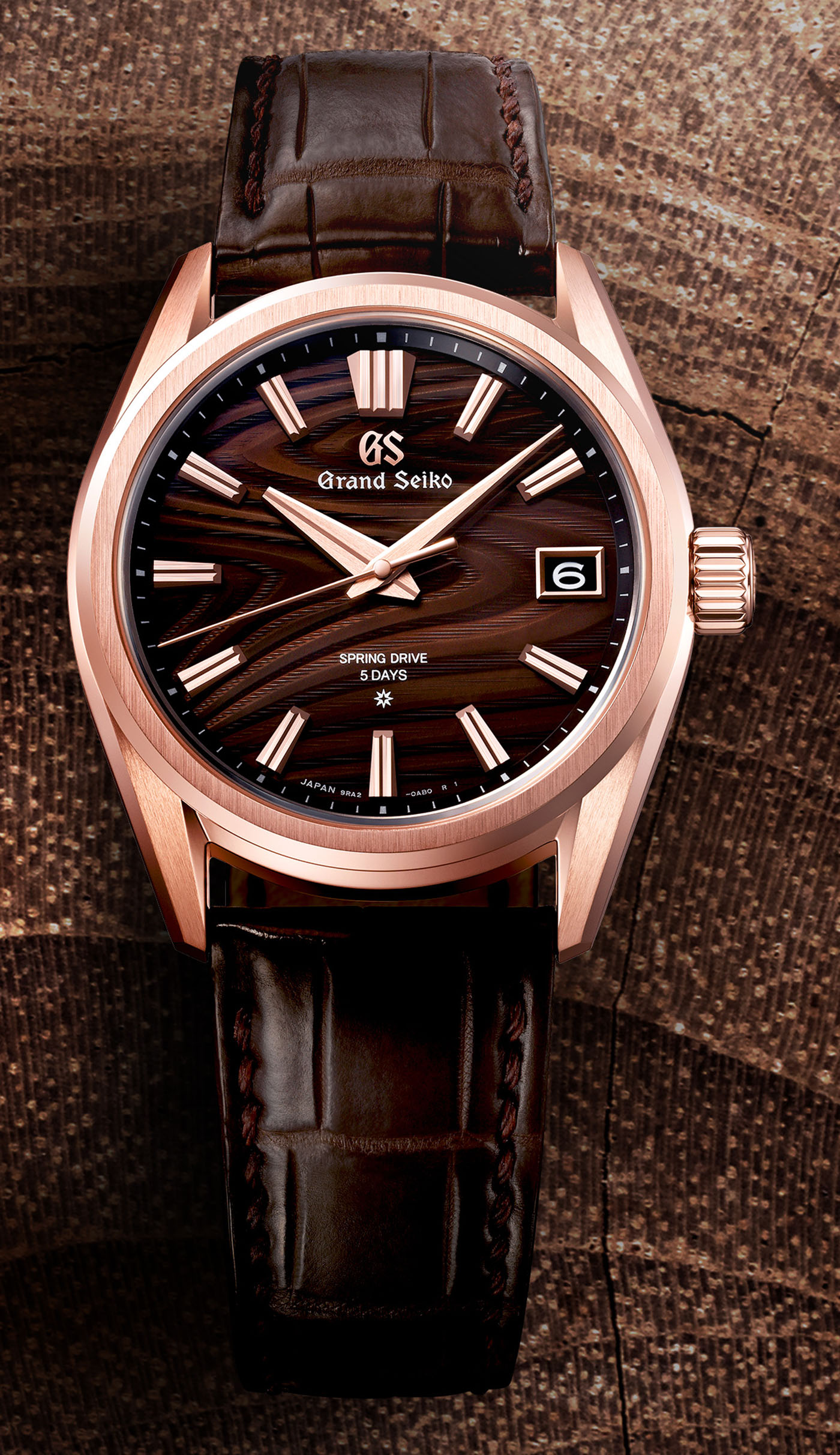