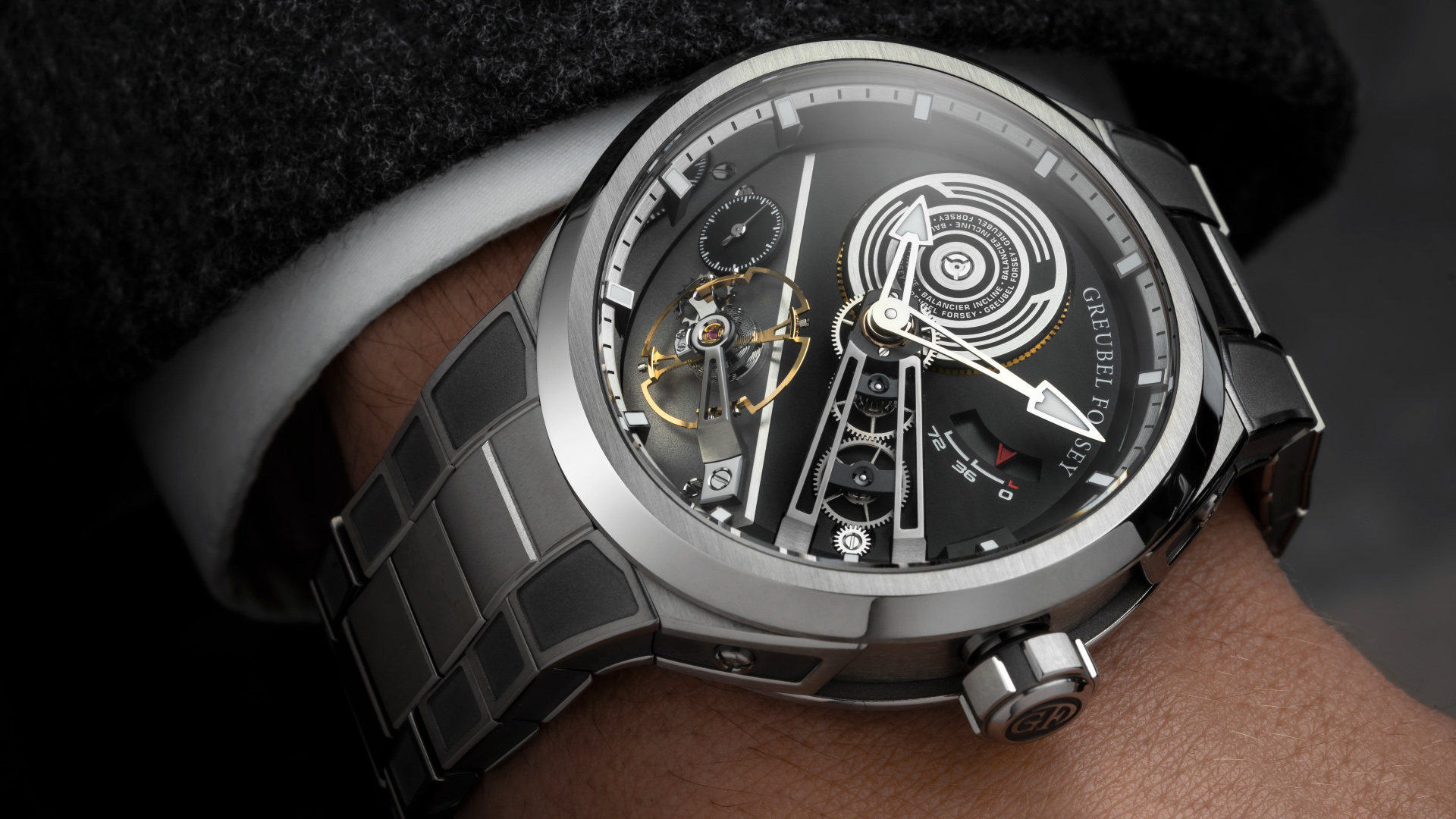 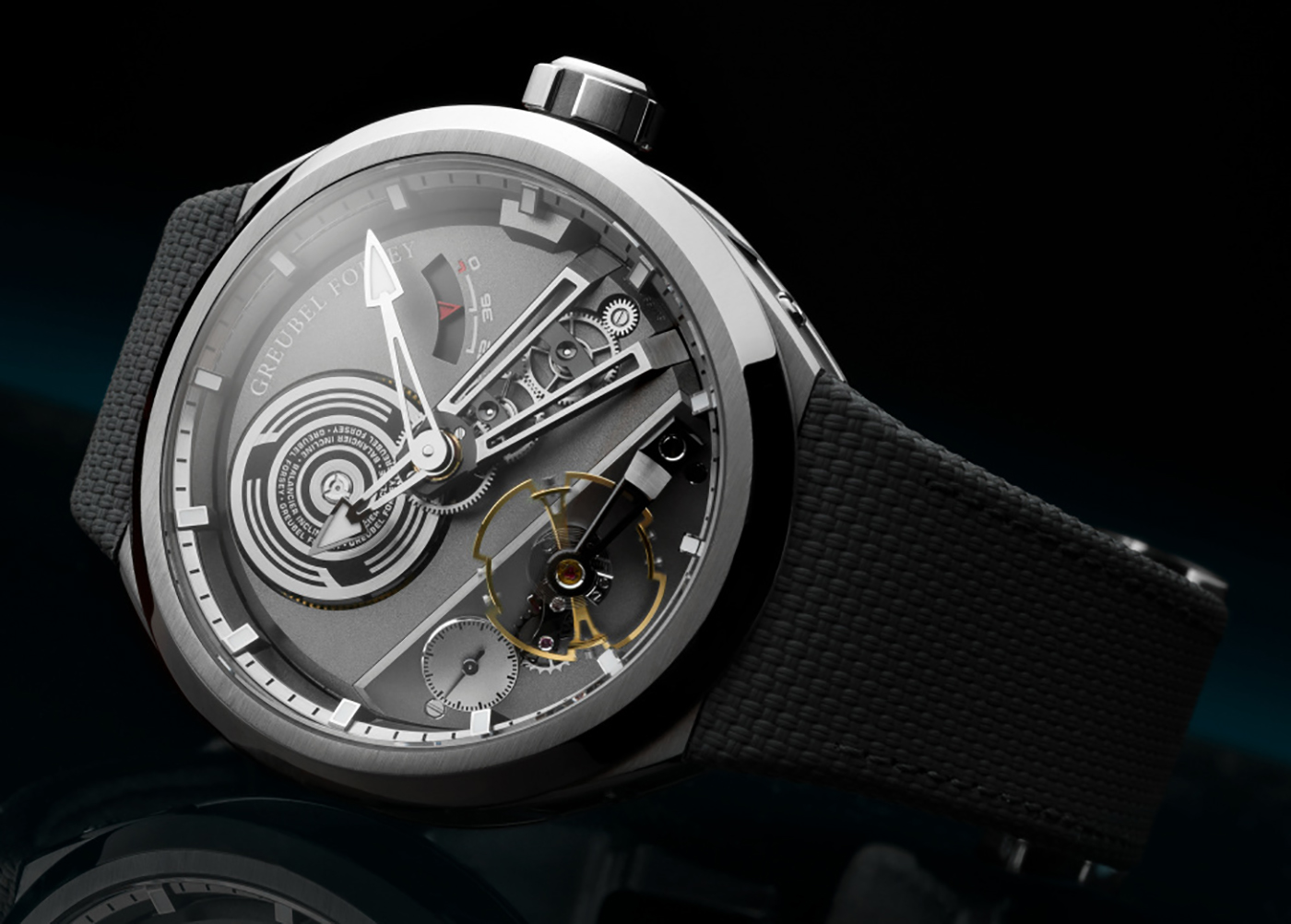 In the opulent more-is-more world of haute horlogerie, most designs tend toward theatrical intricacy rather than clean and streamlined presentation. Boutique brand Greubel Forsey is no stranger to this realm of ornately extravagant design, as even its (comparatively) simpler three-hand models take a decidedly theatrical approach to timekeeping. For its latest release, however, the brand looks to simplify its three-hand Balancier S series, resulting in a surprisingly sleek and wearable take on Greubel Forsey’s style of shock-and-awe watchmaking. The new limited edition Greubel Forsey Balancier S2 offers a cleaner take on the marque’s unique inclined-balance concept, presenting a smoother overall look without sacrificing any of its visual drama. 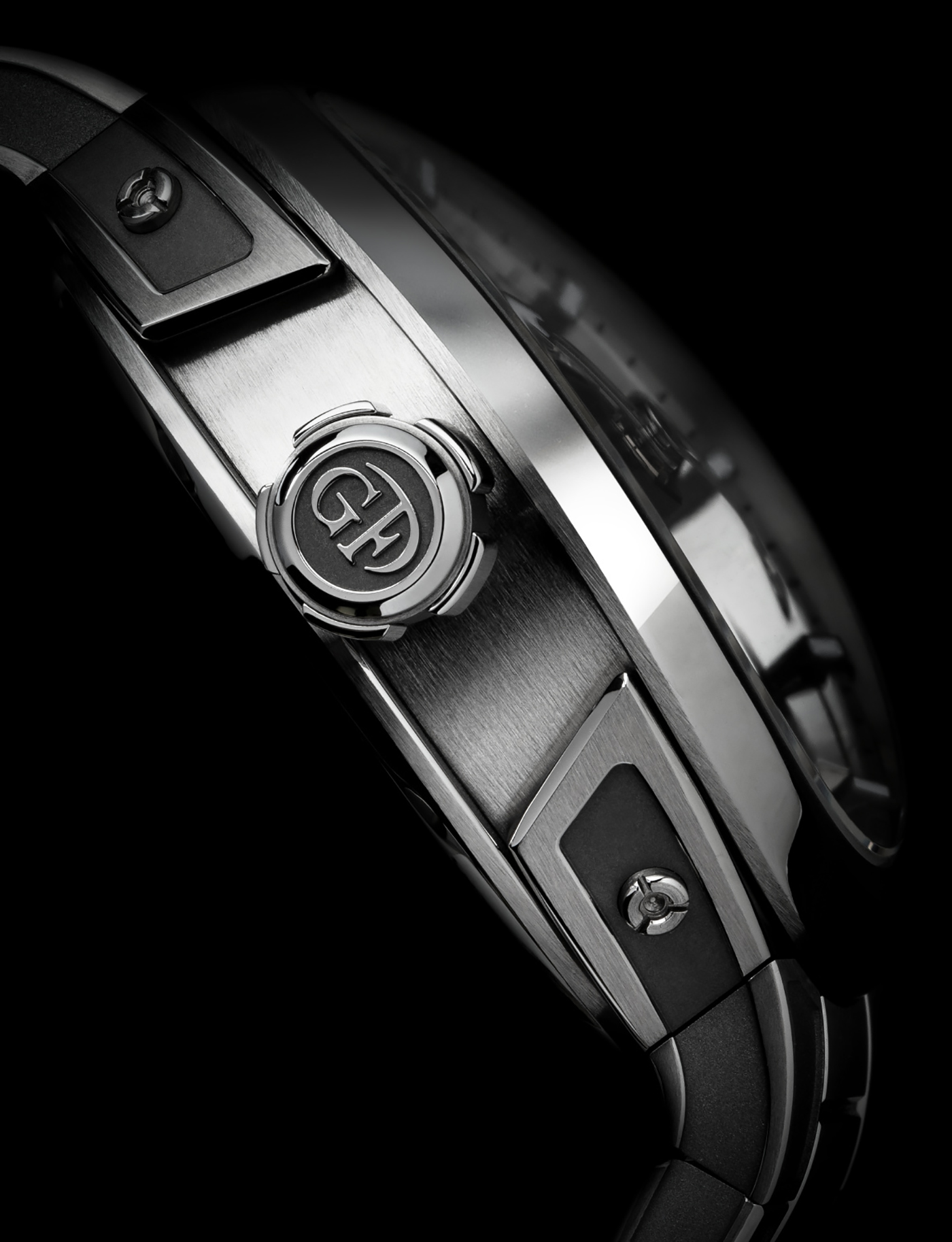 Although a far cry from reserved at 46.5mm-wide, the lugless titanium case of the Greubel Forsey Balancier S2 is a smoother and more refined take on the brand’s signature sporty case concept than its predecessor. The crux of this sleeker new execution is the bezel design. Rather than the ostentatiously engraved words of the original Balancier S, the Balancier S2 opts for a more traditional chamfered design with a mix of polished and horizontally brushed finishes. While this is visually simpler in images, in practice this more traditional feature is anything but simple. When viewed from the side, the entire case profile is arched upwards, including the bezel and the sapphire crystal. This variable-geometry approach leads to a remarkably complex shaping and finishing process, allowing the bezel to appear virtually flat when viewed from above. The crystal is a highly intricate piece in its own right, shaped to a matching arched curve without producing any visual distortion or magnification in images. The cutout case sides are also reworked from the original Balancier S, replacing the blacked-out central section with a strong horizontal brushed finish for a more refined look. Likewise, the gear toothed crown is slightly reworked, with larger teeth and a more complex brushed finish. Greubel Forsey moves the original model’s ring of engraved adjectives to the caseback, surrounding the sapphire display window. The display back itself remains unchanged, however, as does the sporty 100 meter water resistance rating. 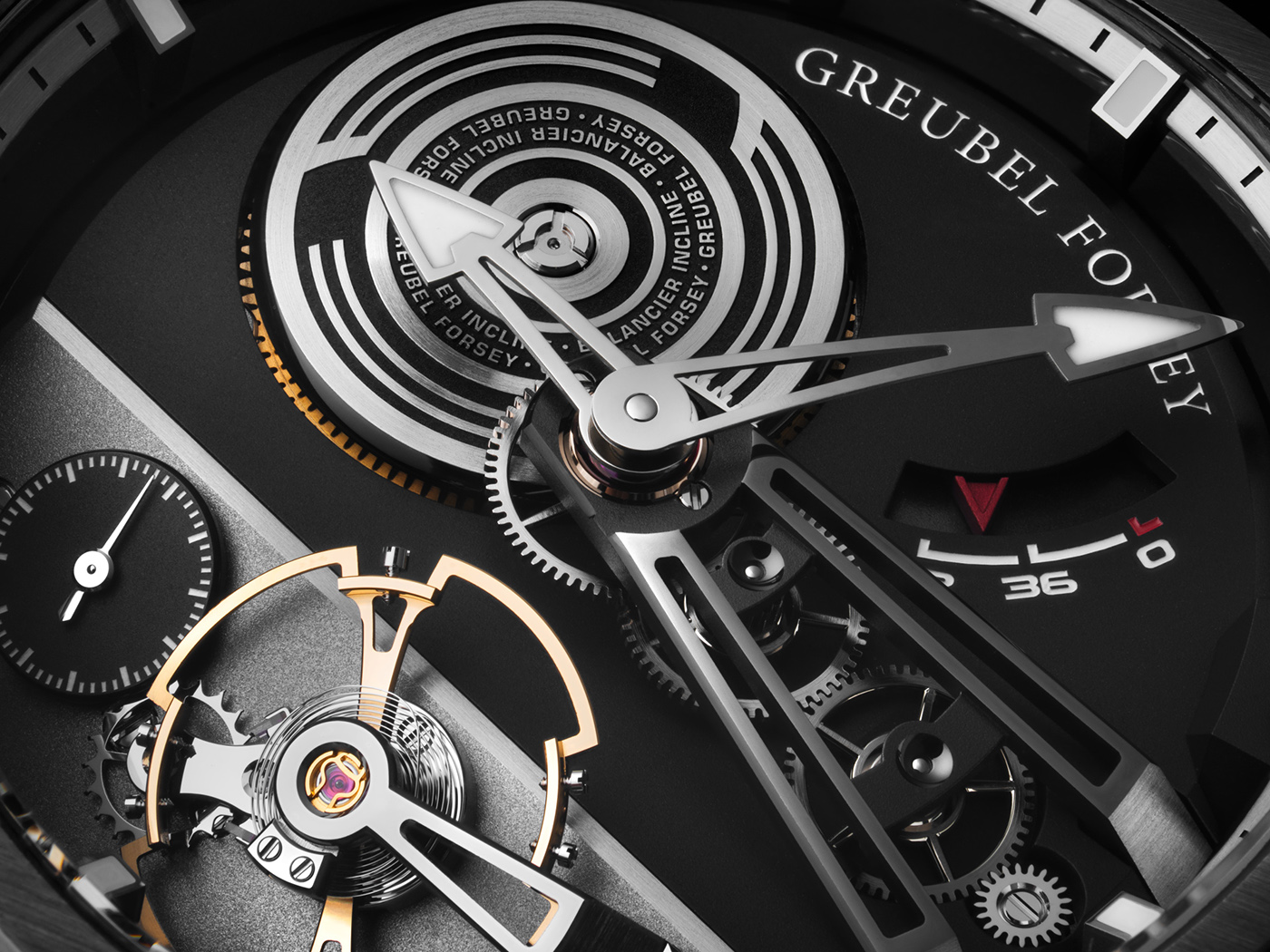 Like the case, the dial of the Greubel Forsey Balancier S2 keeps the general form of its predecessor but refines and simplifies the details. Available in both matte anthracite gray and a lighter concrete gray variant, the main dial surface abandons the flowing complex curves of the case in favor of sharp and dramatic angled planes. The pie pan-style downturn of the 12 o’clock dial edge reinforces the sense of overall depth in images, but the immediate visual highlight of the design is the 30-degree angled plane cutting across the dial from 5 o’clock to 9 o’clock. Not only does this sheer, architectural element imbue the design with a sense of scale and drama, it also serves a functional purpose for the watch’s namesake canted balance wheel. By placing the skeletonized balance cock and oversized balance wheel at an angle to the rest of the Balancier S2’s movement, Greubel Forsey counteracts the miniscule effects of gravity on a stationary timepiece for greater accuracy. Outside of the new dial colors, however, the major changes for the Balancier S2 turn the dial design in a sleeker and more cohesive direction. Gone are the vibrant red accents the first Balancier S used for its arrow-tipped skeleton handset and 8 o’clock running seconds subdial, replaced by clean monochrome elements. The 2 o’clock power reserve indicator is also simplified, with a new fuel gauge-style cutout design that leaves the dial with far more negative space. The exposed mainspring barrel at 11 o’clock also takes a streamlined new tack, replacing the original’s oversized Greubel Forsey signature with a stylized swept-back motif in black. Even the variable-geometry outer ring is reworked for a more complete look in images, adding applied rectangular indices to the silver minutes track. 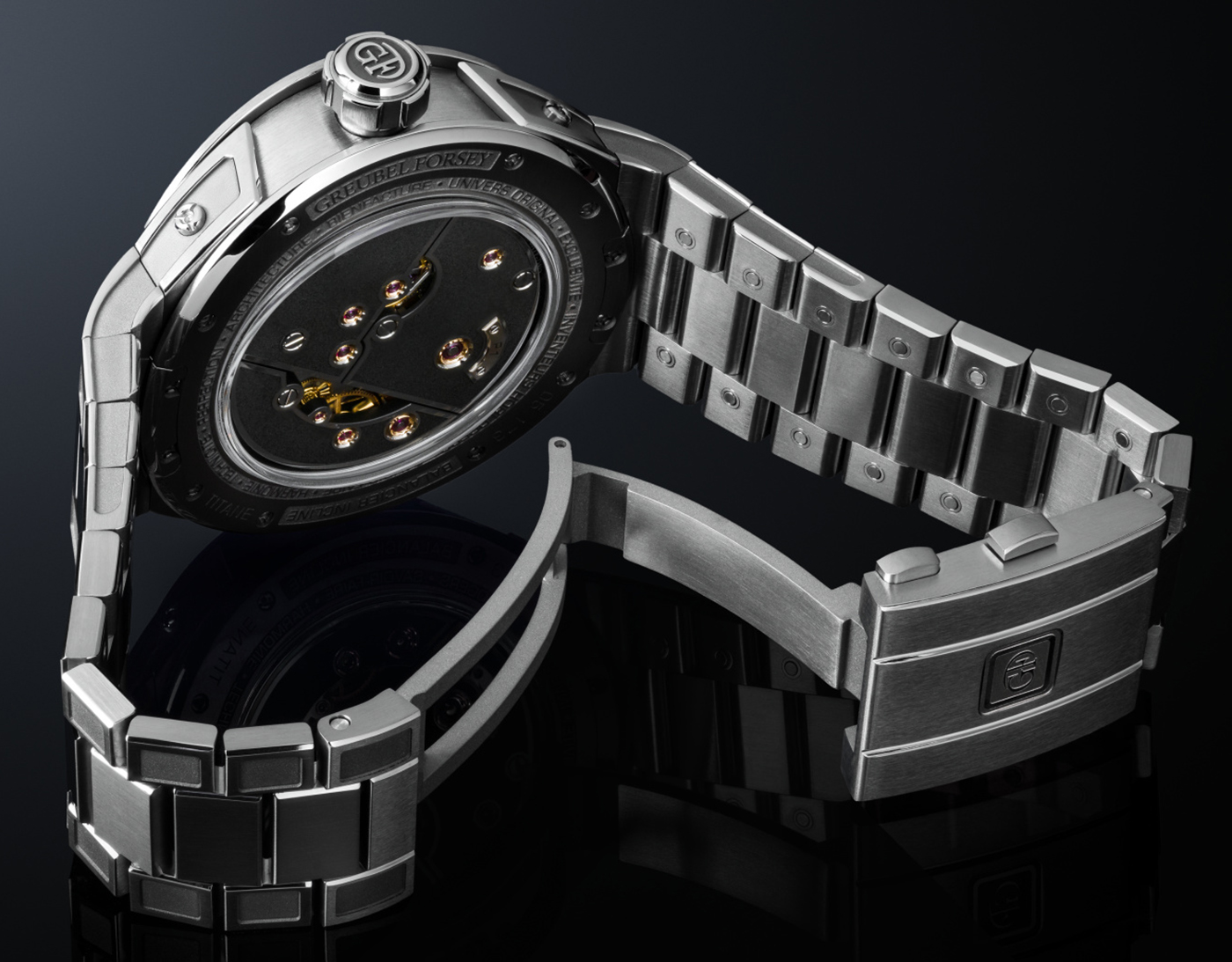 Despite the aesthetic overhaul, the handwound manufacture movement inside of the Greubel Forsey Balancier S2 remains identical to its forebear. While the balance wheel and skeletonized gear train visible from the dial side are open and arranged for maximum visual impact, the view from the caseback is more restricted. The majority of the movement visible in images is covered by a series of frosted and polished titanium bridges, strategically cut to allow glimpses of the golden gears within. In terms of performance, a set of fast-rotating (completing a rotation once every 3.2 hours) twin coaxial mainspring barrels allows this movement to achieve a robust 72 hour power reserve at a 21,600 bph beat rate. Greubel Forsey finishes the Balancier S2 with a pair of strap options. The simpler and sportier of the pair is the deep gray fabric-effect rubber strap, which flows seamlessly into the lugless case for a clean and cohesive look. The available engraved three-link titanium bracelet is markedly more dramatic by contrast, with matte blasted relief sections across both the tops and sides of the links that showcase Greubel Forsey’s finishing prowess. 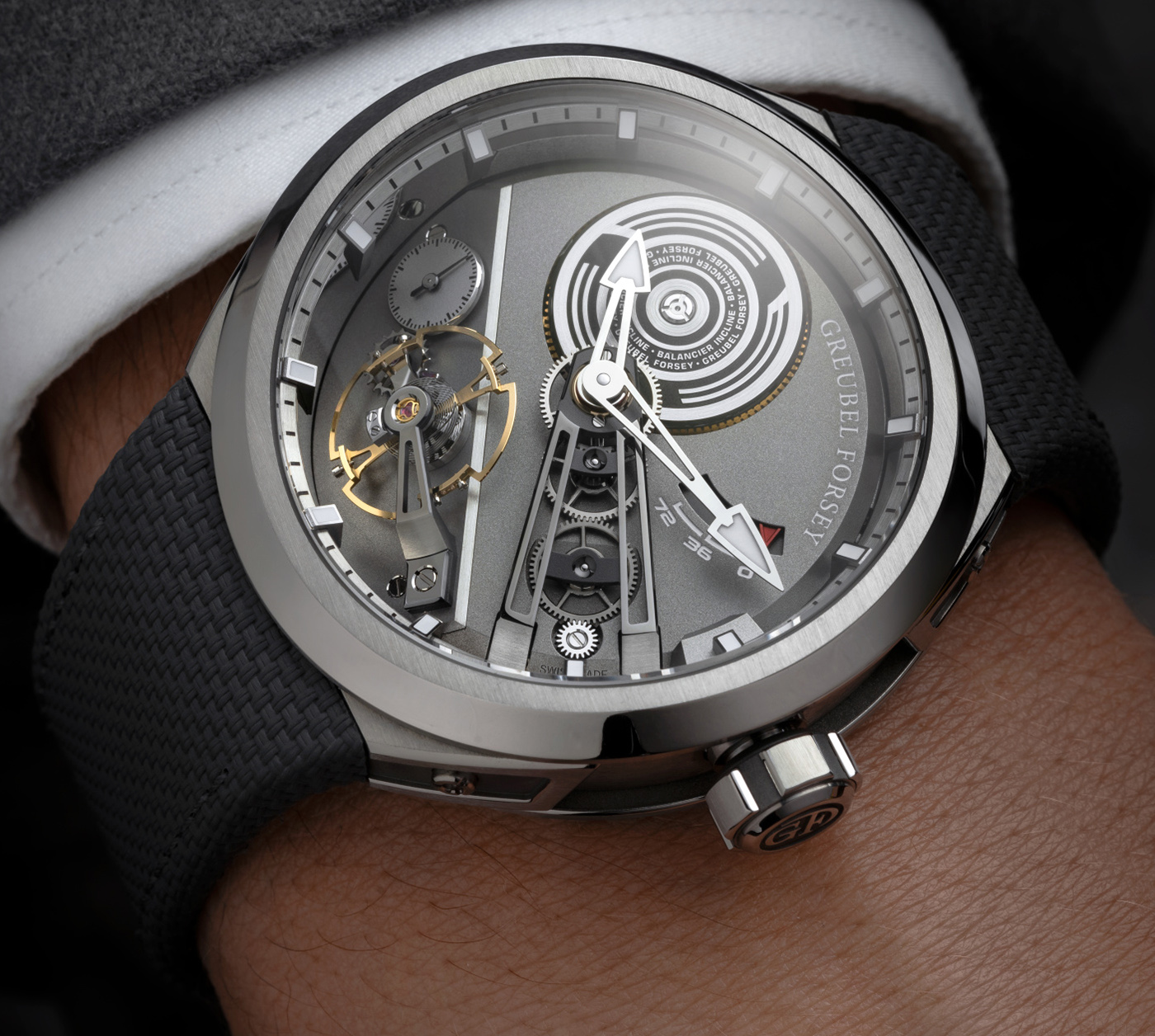