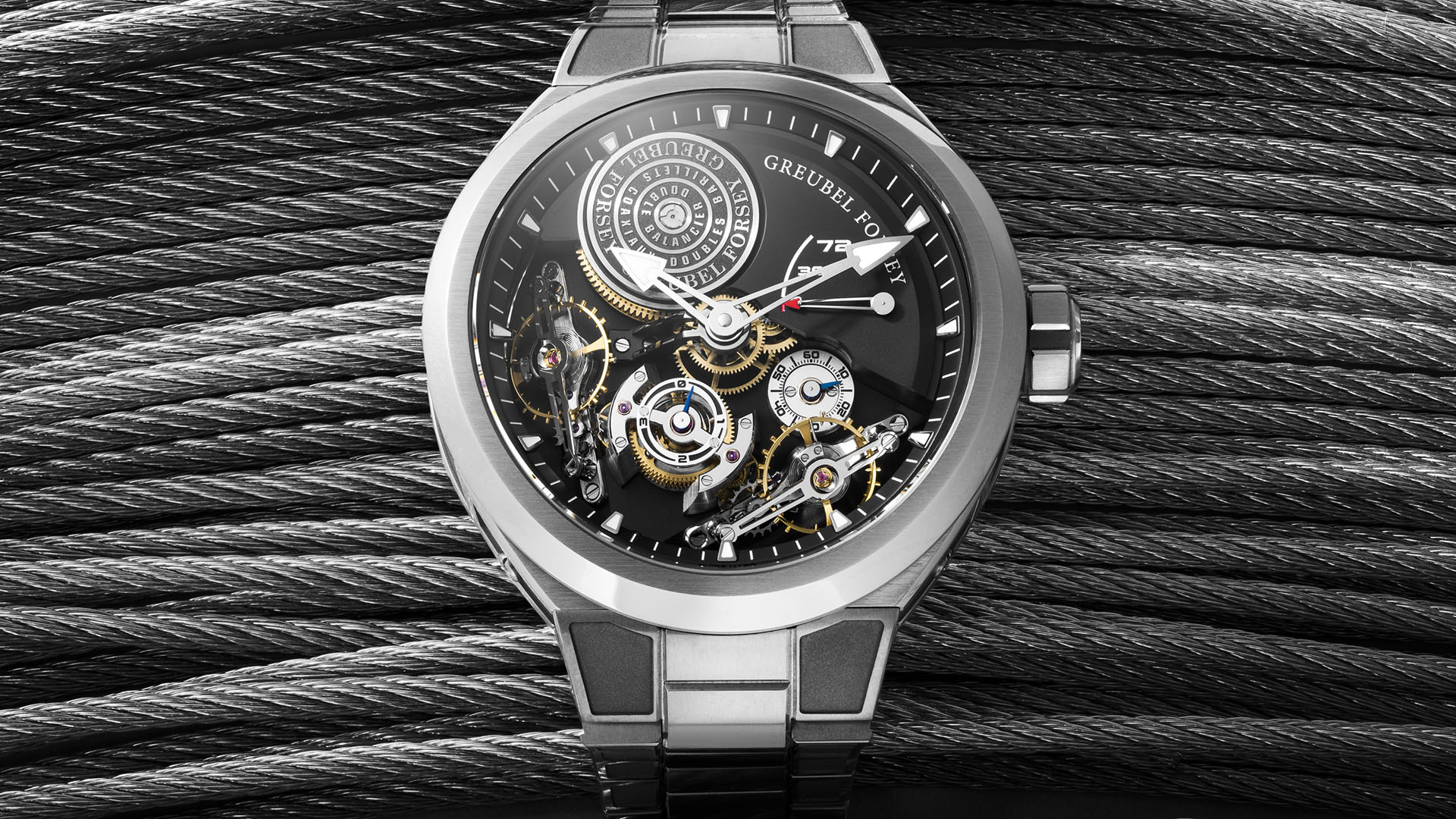 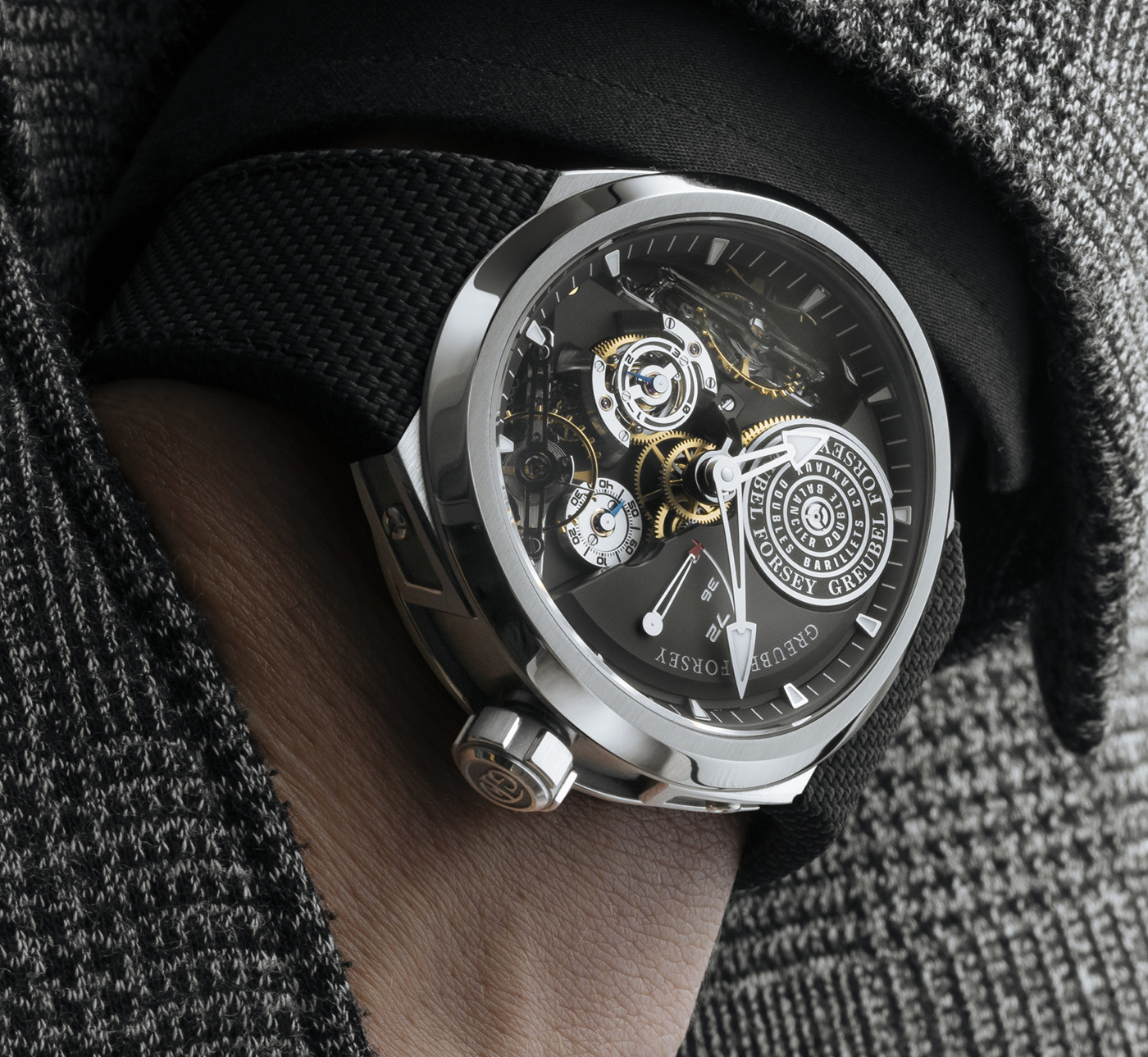 In the lofty realm of boutique haute horlogerie, the sheer power of spectacle becomes every bit as important to a watch design as function, finishing, and aesthetics. Few brands embrace this philosophy of mechanical shock and awe as dramatically as Greubel Forsey. The Swiss marque has built its reputation on turning even simple time-only models into ornate three-dimensional showcases of mechanical complexity, and its more complex offerings often push the boundaries of what’s possible in modern horology. Its latest release lies somewhere in the middle of this spectrum, presenting what is ostensibly Greubel Forsey’s take on a daily-wearable sports watch but expanding this simple concept to include a pair of off-plane resonating balance wheels and a spherical mechanical differential. The limited edition Greubel Forsey Double Balancier Convexe is an evolutionary step forward for the brand’s unique sloping-balance concept, combining truly world-class movement making with a cleaner and more refined presentation that keeps the wearer’s focus squarely on the brand’s impactful horology. 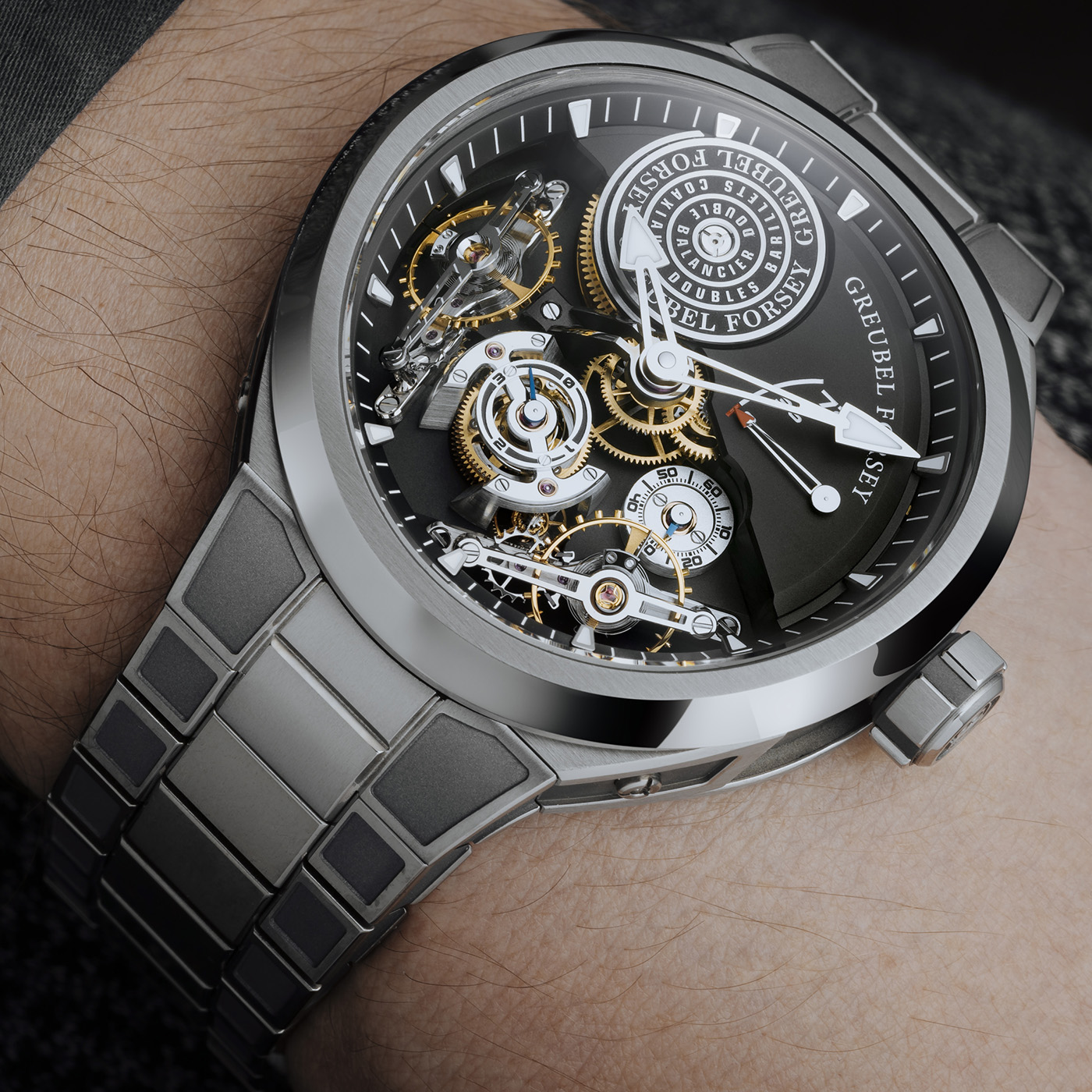 Greubel Forsey fits the Double Balancier Convexe with its deceptively complex 46.5mm titanium “variable geometry” case. This semi-integrated tonneau design is more or less unchanged from its appearance in 2021’s Greubel Forsey Balancier S2, and when viewed from above appears to be a relatively simple all-dial interpretation of the classic tonneau sports watch form. When viewed at an angle, however, the case’s unique progressive compound curve becomes apparent. Although the cutout case sides curve upward with an orthodox continuous sweep, the bezel – and by extension the geometrically complex sapphire crystal – progresses from a gentler curve at the lugs to a tighter, more dramatic bend along the 3 o’clock – 9 o’clock line, giving the case a truly unique, almost parabolic look in images. By extension, the finishing on the broad chamfered bezel is noteworthy here. While the horizontally brushed inner segment remains a fixed diameter throughout, the sloping mirror-polished chamfered section stretches from a narrow band near the crown to a broader ovoid sweep at 12 o’clock and 6 o’clock. Creating this complex, dynamically curving form in notoriously hard titanium is a feat on its own, but Greubel Forsey’s ability to create a matching curved sapphire crystal without major optical distortion images is truly impressive. Like its sporting predecessors in the Balancier line, Greubel Forsey rates the Double Balancier Convexe for a respectably tough 100 meters of water resistance. 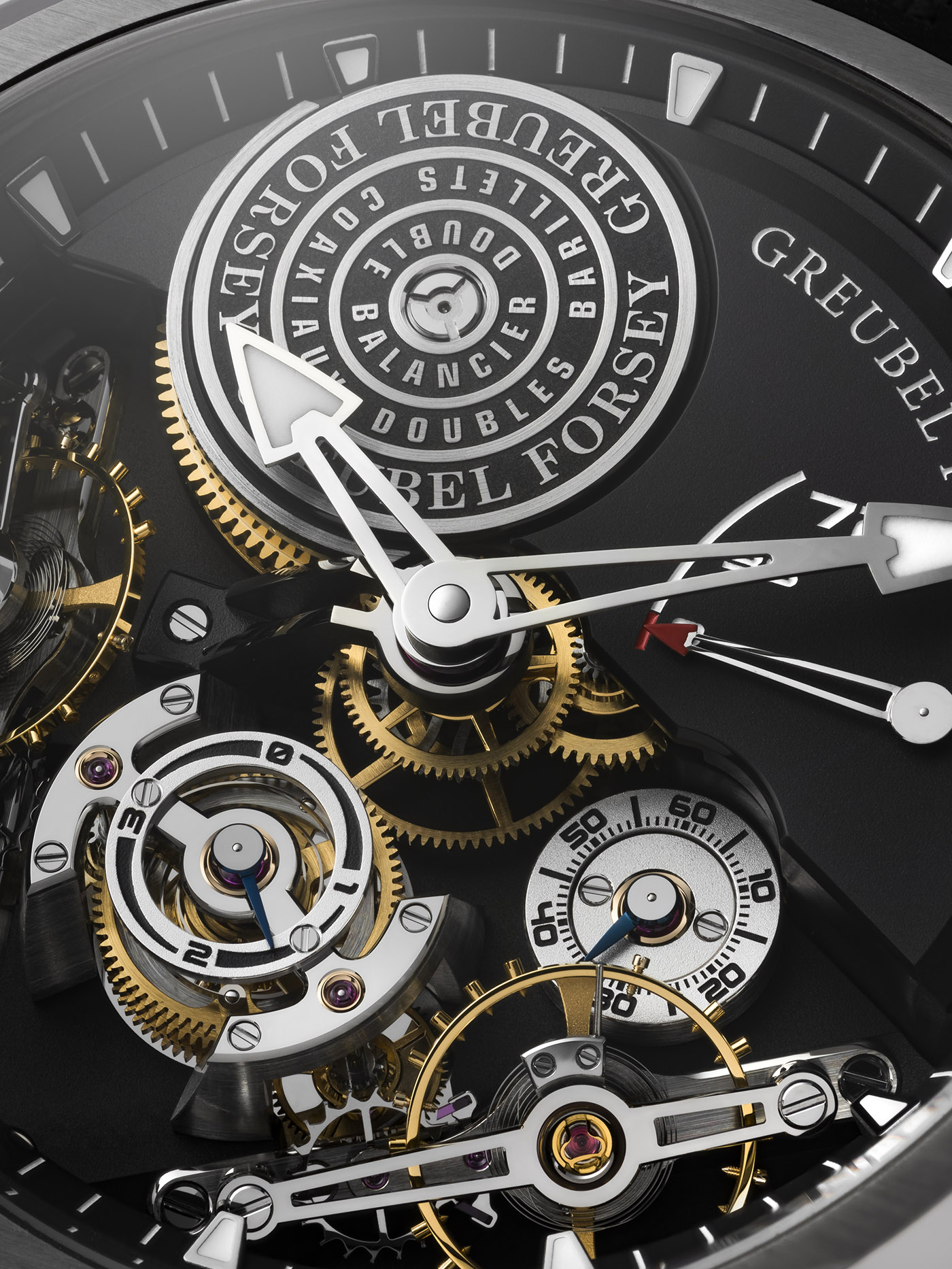 Naturally, the real centerpiece of the Greubel Forsey Double Balancier Convexe in images is its partial skeleton dial. The outer chapter ring with its simple graphic minutes scale and applied wedge indices follows the same “variable geometry” compound curve as the bezel and crystal, but everything inside this outer ring abandons curving surfaces in favor of sharp, dramatic angles. The abrupt, cliff-like change in dial elevation across the lower half of the dial is a perfect example of this, creating a sheer vertical face out of a surface that rarely has any verticality at all in watchmaking. This recessed layer also exposes the Double Balancier Convexe’s namesake skeletonized movement elements. At 5 o’clock and 9 o’clock sit the watch’s twin balance wheels, each angled at a 20-degree incline to the rest of the movement. With these canted angles, long narrow skeleton balance bridges, and an ornate mix of brushed, polished, and frosted finishing, these elements are the immediate focal point of the design in images, and should lead to improved chronometric performance. Although a twin-balance design is certainly exotic, it’s far from a new idea in concept, as similar designs have been produced for centuries to take advantage of the resonance effect – a natural tendency for two nearby oscillating bodies (tuning forks, pendulums, and balance wheels, for example) to regulate one another and synchronize over time. To transfer power between these two separate escapements into the main gear train, Greubel Forsey mounts a spherical constant differential at 7 o’clock. Acting like a reverse of the differential in a rear-wheel-drive car, this complex three-dimensional gear train combines the torque from both escapements into a single output, and should further improve overall accuracy by averaging the output between the two balance wheels. The brand highlights this intricate and rarely-seen complication with a skeletonized cage, along with a simple blued hand and minimal scale to track its four-minute rotation cycle. Greubel Forsey nestles the Double Balancier Convexe’s small silver running seconds subdial inboard of a balance bridge at 4 o’clock. With a clean, sporty presentation that mirrors the differential cage, the brand keeps this useful functionality readily available without overshadowing the more complex movement elements in images. Greubel Forsey mounts its final complication on the upper level of the dial at 2 o’clock, tracking the movement’s 72-hour power reserve with a sleek fuel gauge-style scale and a red arrow-tipped skeleton hand that handsomely echoes the main timekeeping handset. This main handset, while comparatively simple, integrates its own horological flourish, mounted above the partially exposed gear train atop a tall cantilevered skeleton bridge. The Double Balancier Convexe’s last major skeleton dial element is a Greubel Forsey staple, with the movement’s oversized co-axial twin mainspring barrel assembly punching through the dial surface at 11 o’clock. Topped with a radially brushed, black-treated relief engraved barrel cover, this pair of series-coupled barrels includes a slipping spring to reduce tension between the two mainsprings and makes a full rotation in a relatively short 3.2 hours. 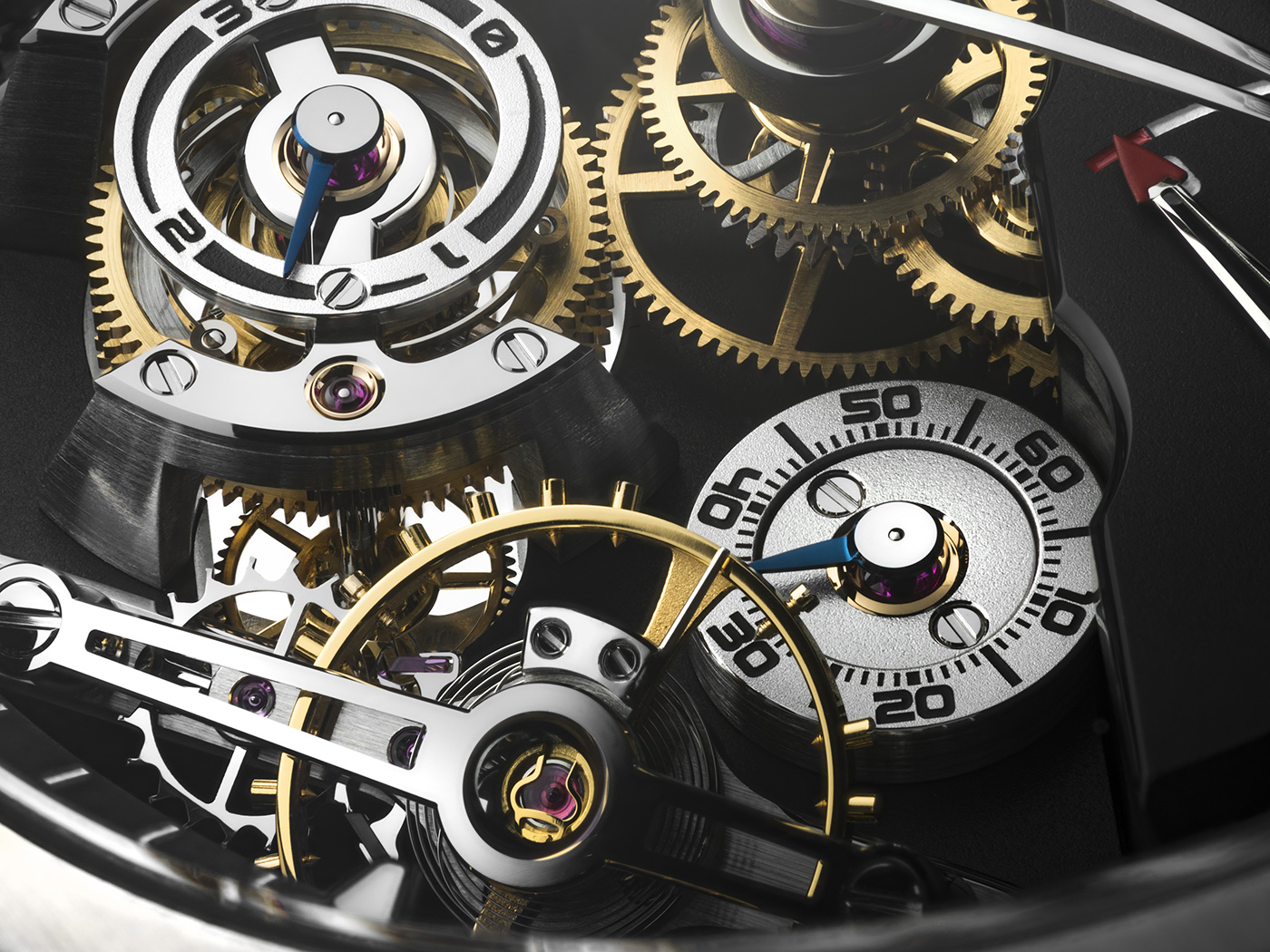 The handwound dual escapement movement exposed by the Greubel Forsey Double Balancier Convexe’s dial is fully in-house, although the brand does not give this movement a name or serial number (unfortunately, the brand was also unable to provide images of the caseback side of this movement prior to press time). Outside of the previously mentioned mechanical innovations, this movement’s performance is robust but not earth-shaking, with a 72 hour power reserve at a 21,600 bph beat rate. Greubel Forsey offers the Double Balancier Convexe with the option of either a tapering charcoal gray cordura-effect rubber strap or the brand’s flowing engraved three-link titanium bracelet. This latter option gives the design a faux-integrated effect, with end links crafted to simulate lugs at the ends of the lugless base case. This bracelet also continues the form and finishing of the case handsomely in images, tapering seamlessly into the cutout case sides with matching engraved matte sections along both the sides and tops of each outer link. Overall finishing for this bracelet is stellar as well in images, with a complex interplay between raised brushed surfaces, darker recessed matte areas, and narrow polished chamfers along each link’s edges. 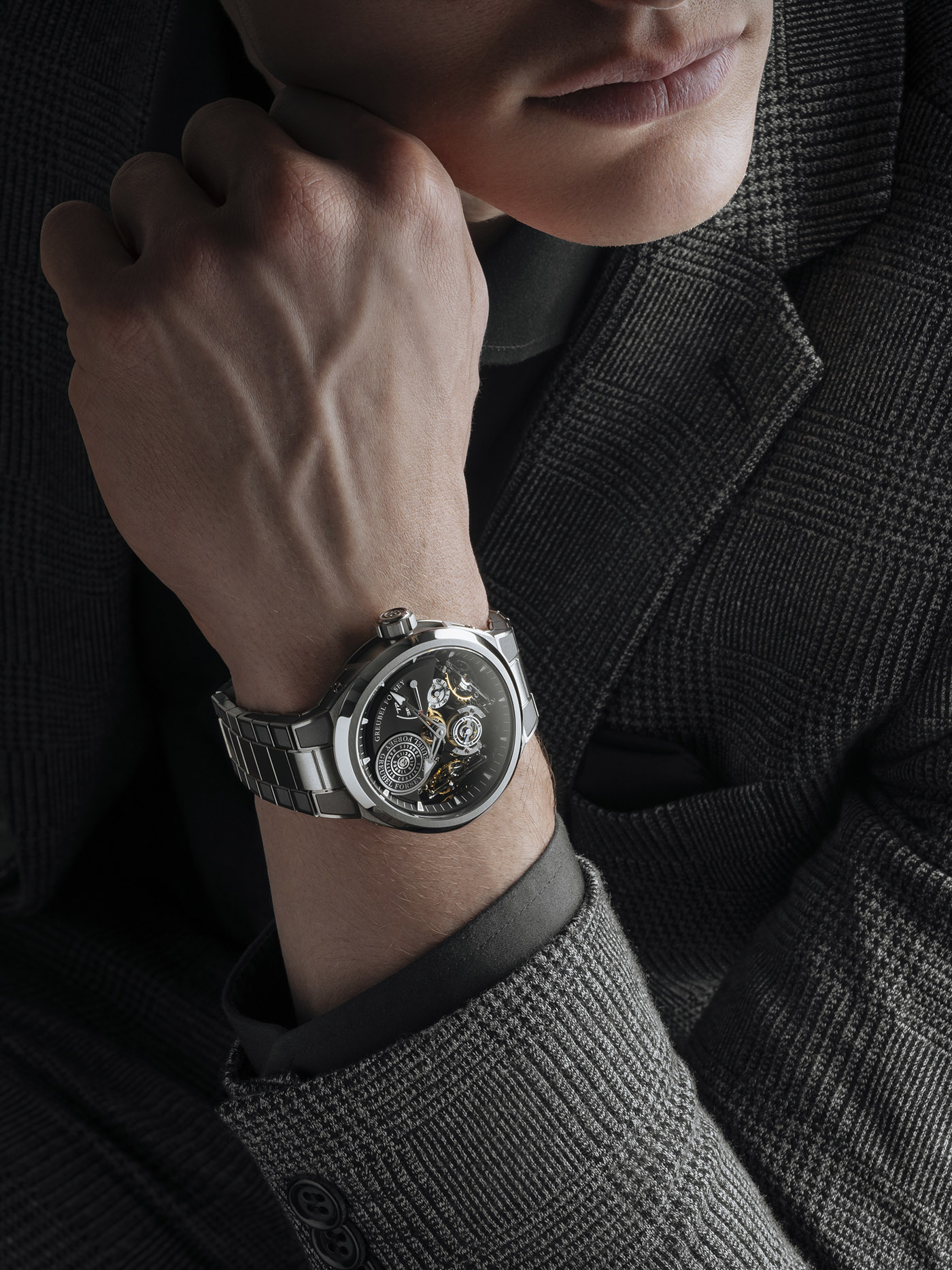