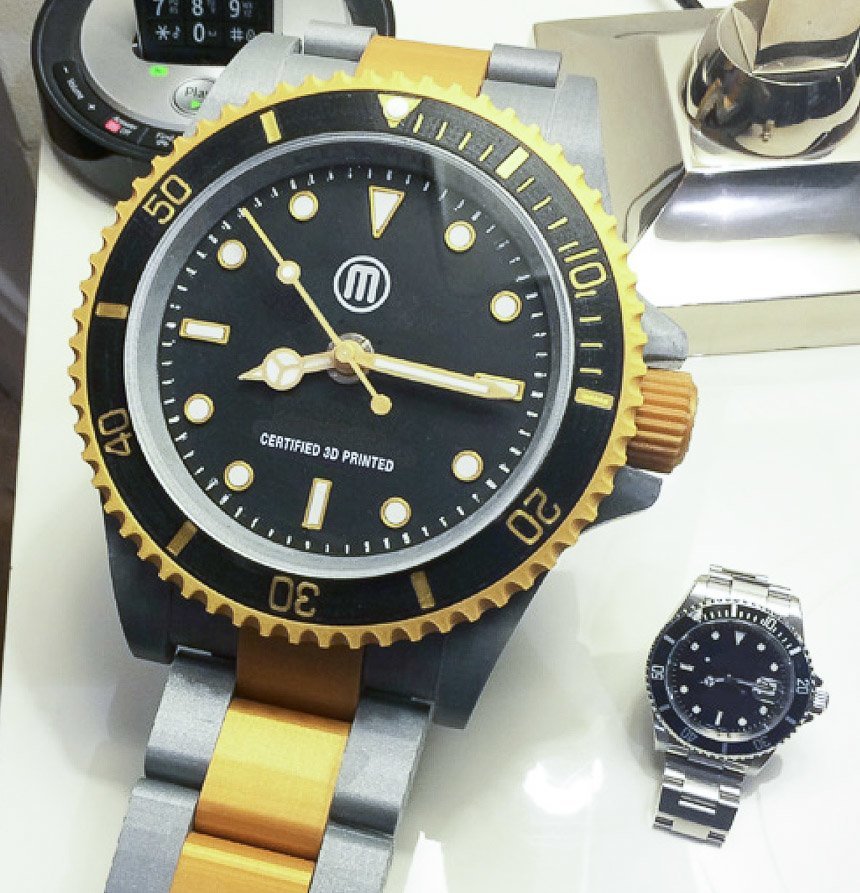 People who enjoy 3D printing as a hobby tend to like mechanical things, and you know what that means – a lot of them are going to be watch guys. Even Bre Pettis, the founder of Makerbot (probably the most popular producer of 3D printers for consumers) is a big watch lover. The 3D printing universe has opened up a world of very interesting possibilities in the realm of horology. While 3D printed watches aren’t a glorious reality yet, we’ve seen an number of developments over the last year, such as the 3D Printed Tourbillon here (which you can buy). Now, check out this 300% Rolex Submariner watch designed and produced by Franc Falco as an homage to his own personal Rolex Submariner.

The plans for this awesome giant dive watch are available for anyone to download via Thingverse.com, a repository of 3D printable projects. The plans include not only the schematics for all the parts you’ll need (expect for the clock mechanism which is a cheap separate purchase), but also a detailed PDF with Franc’s instructions on how to assemble your own “truly desk worthy” dive watch. For the public plans, he removed the Rolex logo and branding for legal reasons, but his original project was as close to a replica of his own Submariner as possible – just 300% larger in size. 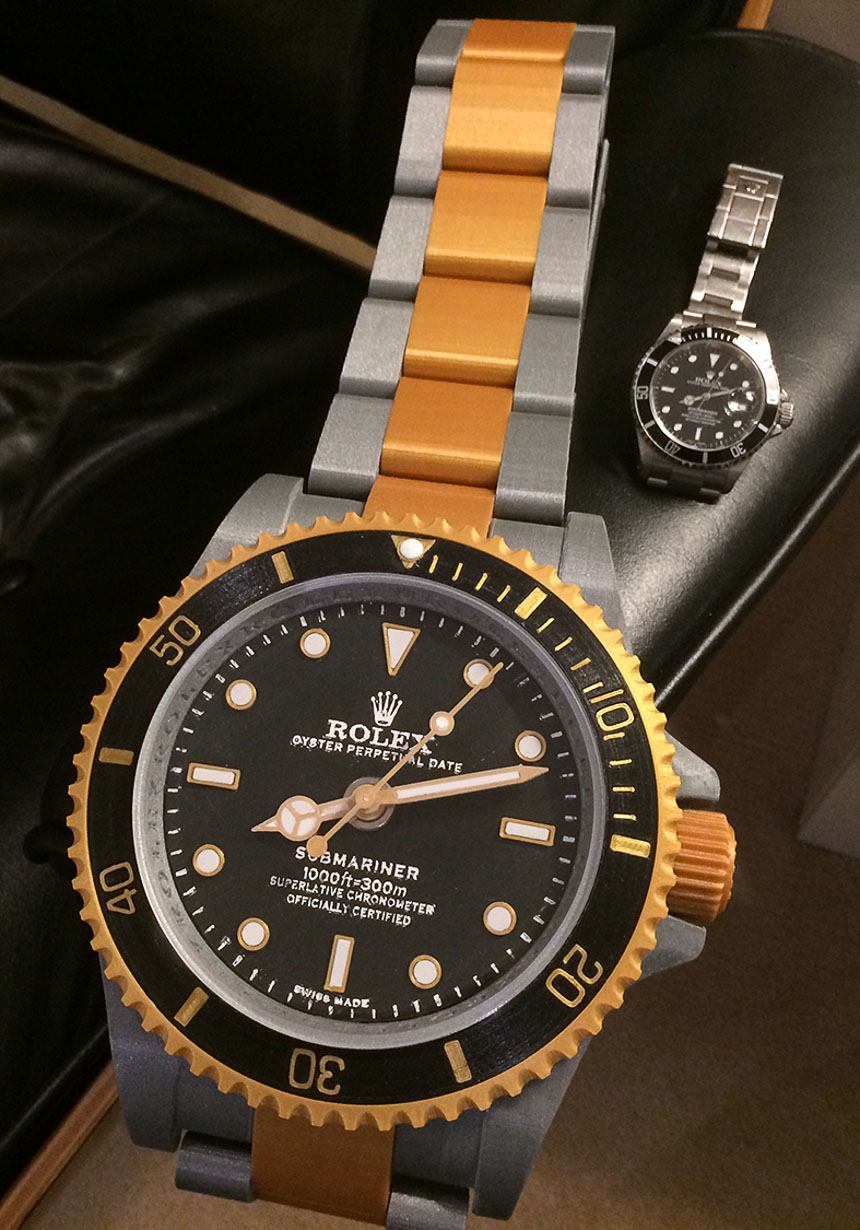 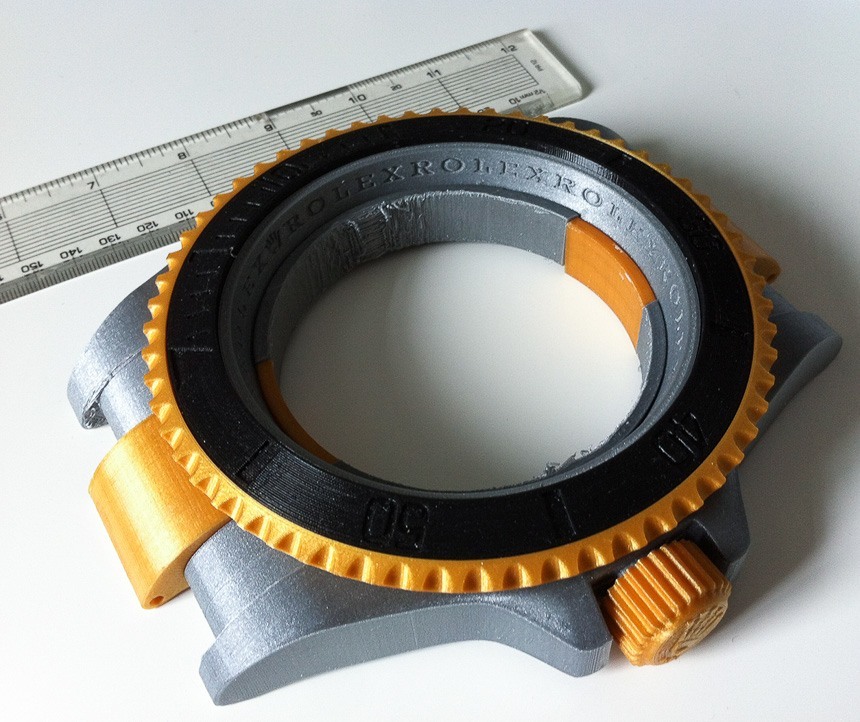 Like many 3D printing hobbyists, Falco engaged in the project to replicate his watch in 3D printed form to see if it would work. This is a common motivating factor for enthusiasts, and places like Thingverse are full of “look what I replicated using my 3D printer” experiments. Not all work out this well. According to Falco the entire project was done with a budget of under $100 – and most of that is in the cost of the 3D printing material. The real expense, of course, is in time if you want to do one yourself. Falco did all the work of designing the parts, but you’ll have to print them, sand them, and assemble this very complex project. As a testament to his skills, even the ratcheting uni-directional rotating bezel system on the watch works.

Assuming you could wear a 300% size increased dive watch, you could even wear this piece, as the bracelet fully articulates along with a deployant clasp. Of course, the crown doesn’t work, as this desk diver watch is powered by a small quartz clock movement. Don’t even ask about water resistance. According to Falco, the hardest part to not only design but also assemble is the dial. I think the end result looks fantastic, and that Falco did an amazing job. Kudos to him, and what an amazing display piece a massive diver’s watch like this would make in the home or office of any watch lover. 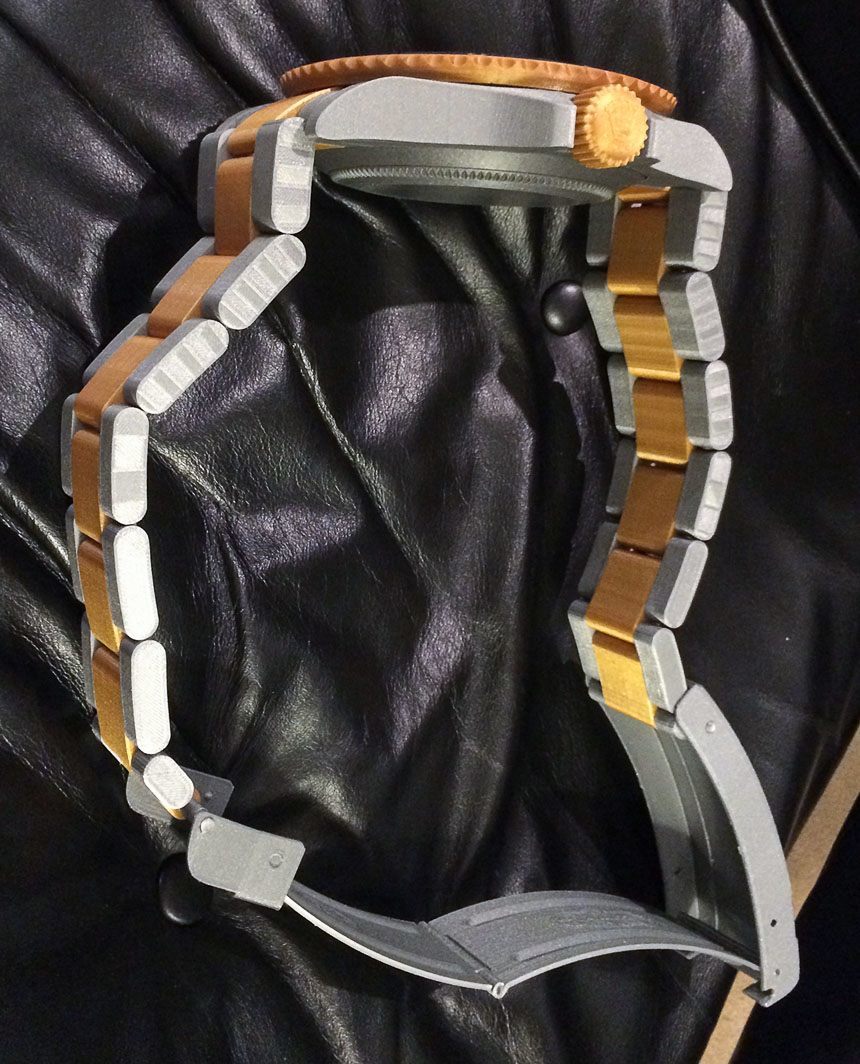 Franc Falco explains a bit more about this project in his own words for aBlogtoWatch:

The project was purely an exercise in my 3D modelling and the capabilities of my home-use desktop 3D printer (Ultimaker 2).

I’m lucky enough to have owned a Rolex Submariner for over 10 years, and always admired its quality and style, and so, using my watch as reference, I had previously completed a project to model and 3D print a real size version of the watch.  It was one of my first models uploaded to the 3D print model site: Thingiverse.com.

However, on purchasing the Ultimaker 2 3D printer, i thought it would be interesting to try and create a more detailed version of the watch. I had achieved as much detail as I could at real size with the previous project, so the option of up-scaling for this new project was chosen.

From there, it was (just) a case of taking detailed measurements from my watch and scaling 300%. (the face diameter is a convenient 100mm). The 3D modelling was a challenge, and i had to resolve how the model would piece together. Lots of iterations to test-fit pieces. The face dial with the lettering was the biggest challenge. I could have made it easy for myself and just found a picture of the dial, laser printed it and stuck it on a blank disc, but this project was to produce the model via 3D printing, so another way had to be found, and I have to say, I’m really happy with my solution!

It involved printing the face with de-bossed lettering at a very high (3D print) resolution, then flooding the de-bossed areas with white paint, letting that dry, and then surface-sanding the whole face back to reveal the lettering. (I have subsequently improved the results with further refinements to the technique). 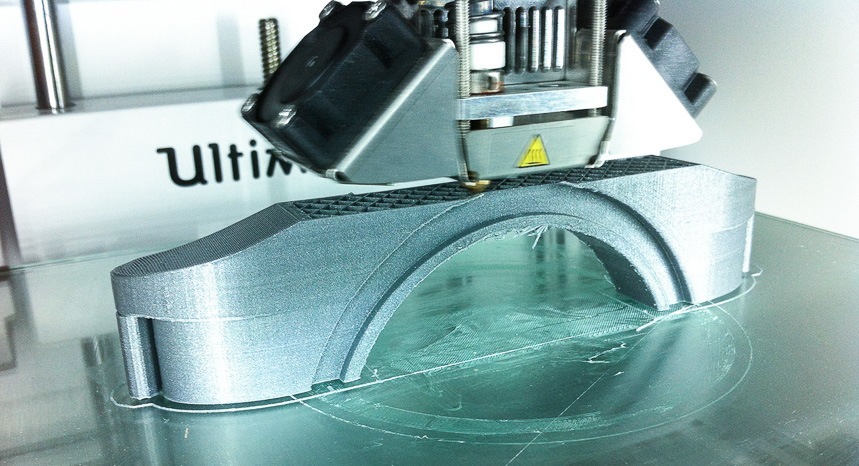 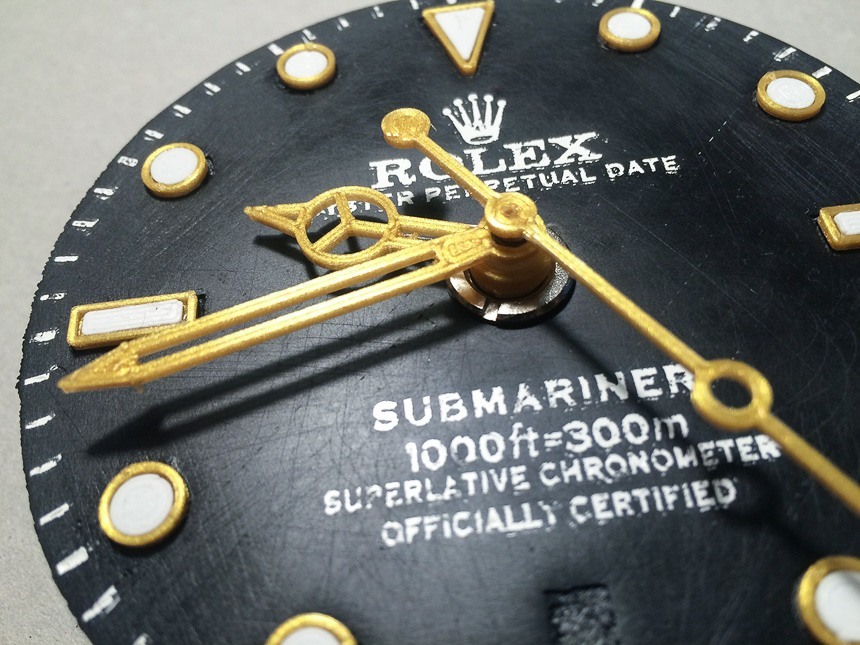 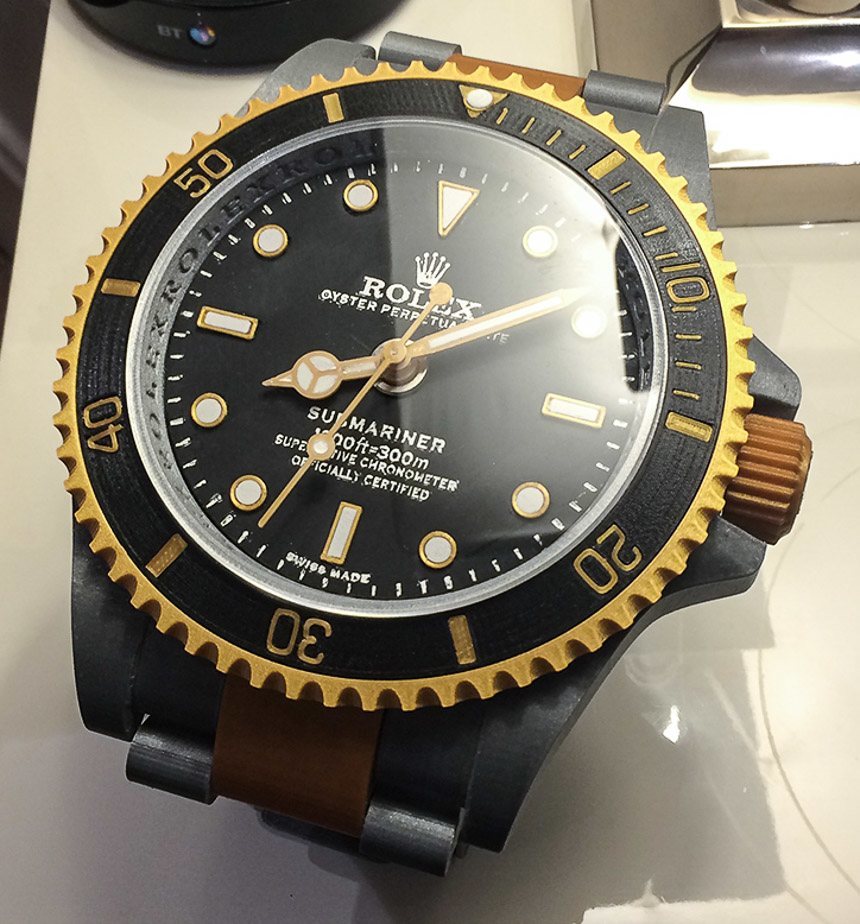 The whole watch was printed in parts according to the PDF plans, and a really cheap (£4) battery powered Quartz clock movement was purchased via eBay – the irony of using that for a ‘Rolex’ does make me smile! So, in fact, the only parts not 3D printed are that actual clock mechanism and the perspex ‘face glass’ (desk top 3D printing can’t as yet produce optically clear material – I’m sure that will evolve shortly).

The cost of 3D filament in total was about £50, a tube of Super Glue, and many hours of my time. But this hasn’t been a commercial venture and the lessons from the project have been great, and I’m really happy with the end result. There is the obvious question as to why anyone would want a massive divers watch as a desk clock, but I like it!

Just to clarify, the version I have uploaded for ‘Creative commons’ use to Thingiverse.com has been “de-branded” to hopefully negate any copyright infringement issues, but i would be interested to know what Rolex would make of it, I’m hoping they would appreciate my personal project, and non-commercial desire to celebrate the history of their watch making excellence with a modern technology version of one of their iconic time pieces!