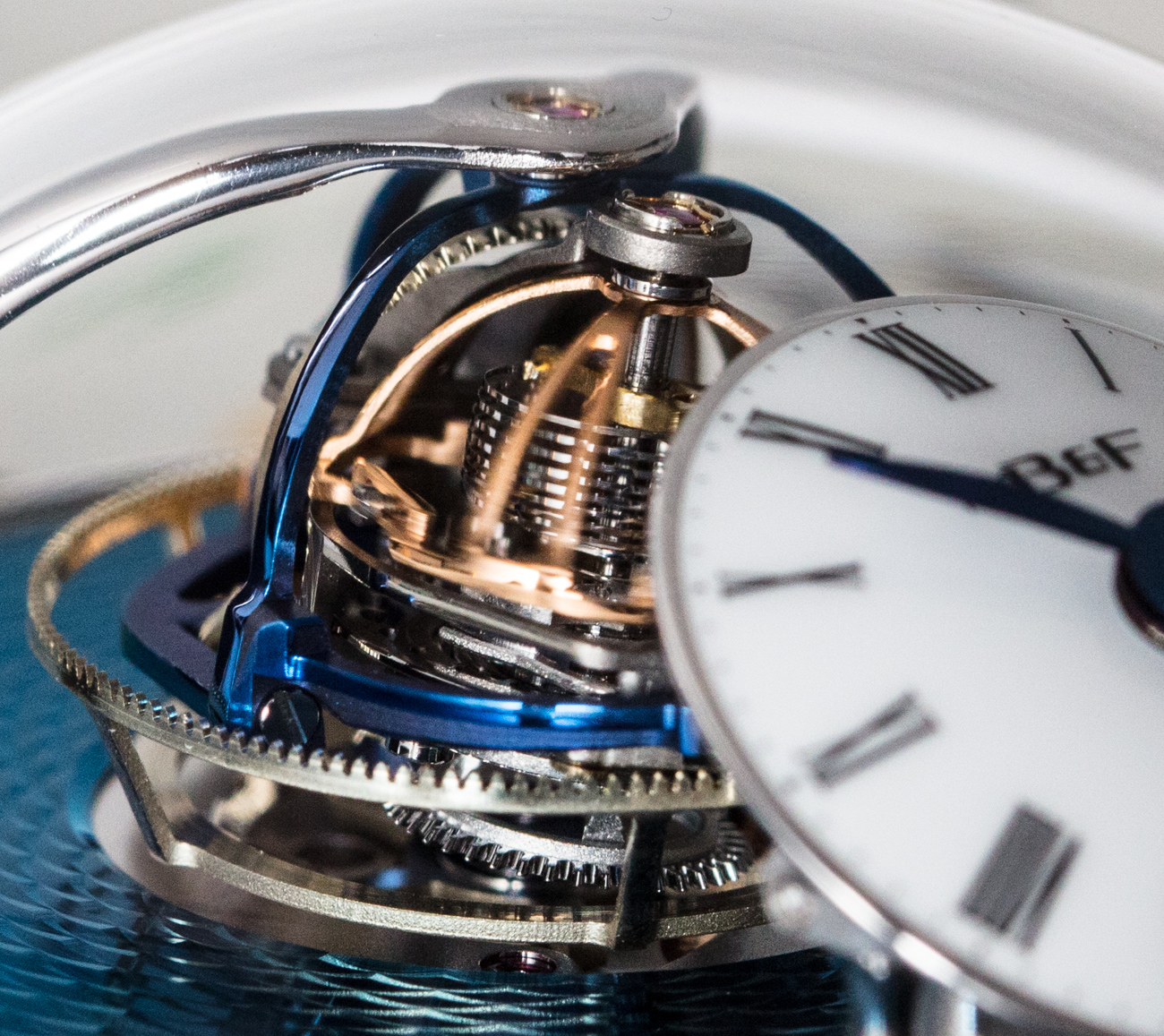 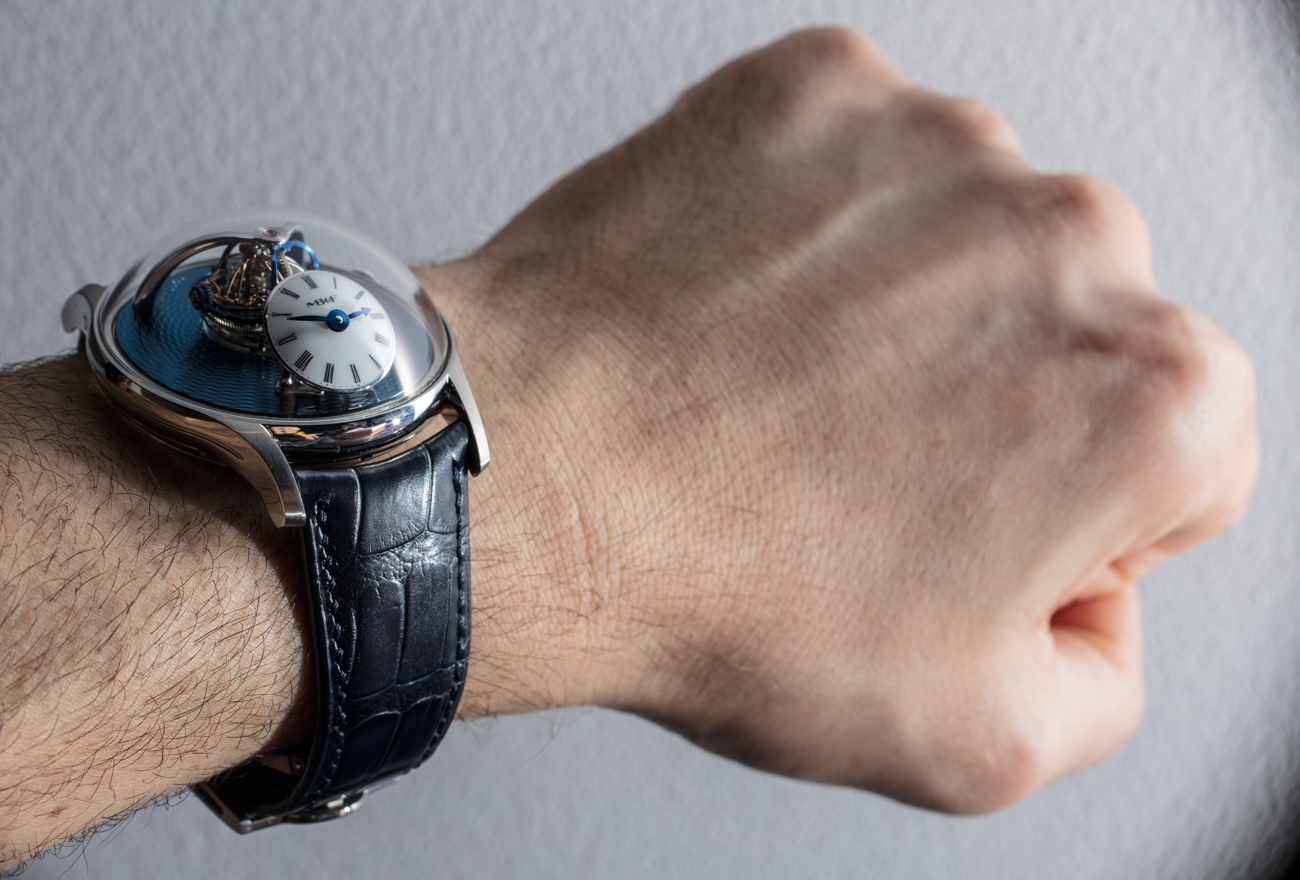 The newest MB&F watch for 2019 is the Legacy Machine Thunderdome and, with its intense focus on stunning visual animation, it continues a longstanding tradition of MB&F producing innovative little machines with interesting people. MB&F founder Max Busser decided to once again work with watchmaker and celebrated decorator Kari Voutilainen and now also watch movement designer Eric Coudray for the Thunderdome. The watch debuts a new rotating regulation system they call the TriAx.

The Legacy Machine Thunderdome is the answer to the question, “Hey Eric, can you make a really wild-looking triple axis… something?” The result is placed on the dial of this 22.2mm thick timepiece, set against a traditionally guillochéd, machine-engraved dial in a platinum case. This debut Thunderdome model in platinum is joined by two other pieces of the Legacy Machine Thunderdome (both in tantalum) which have been produced exclusively for longstanding MB&F retail partner The Hour Glass. 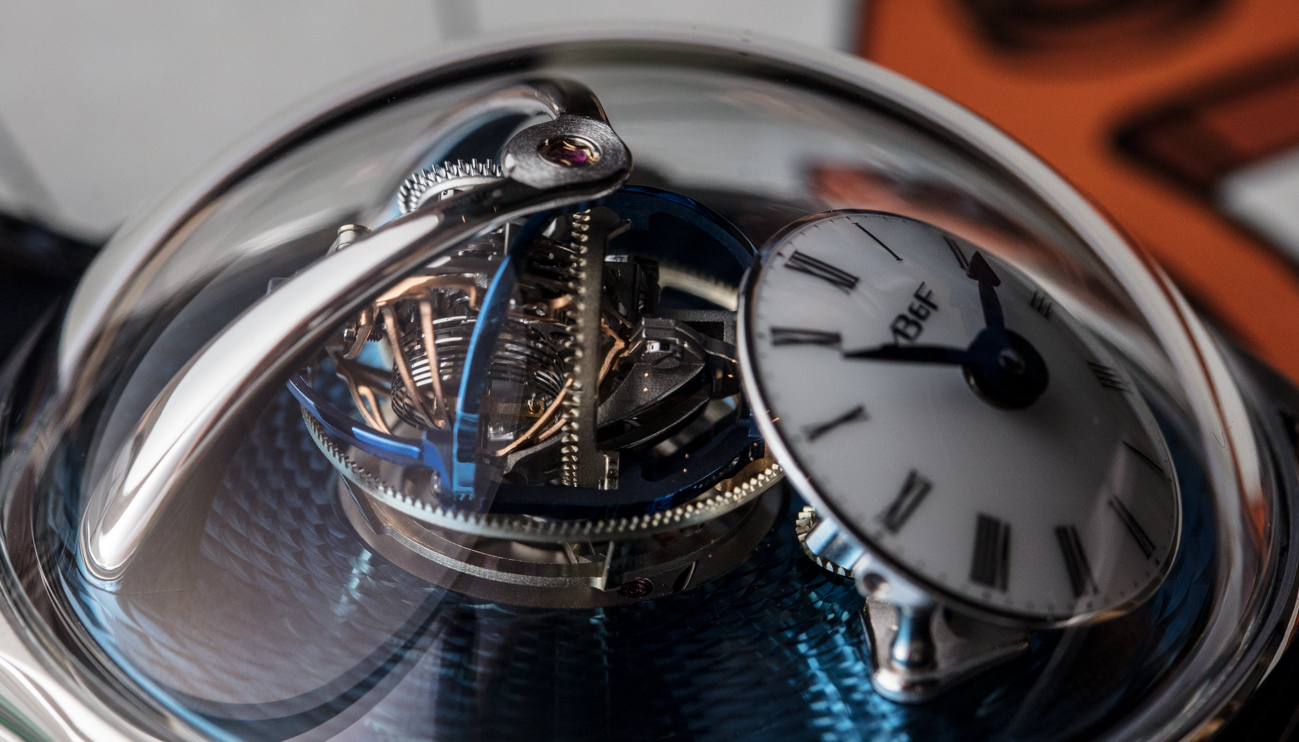 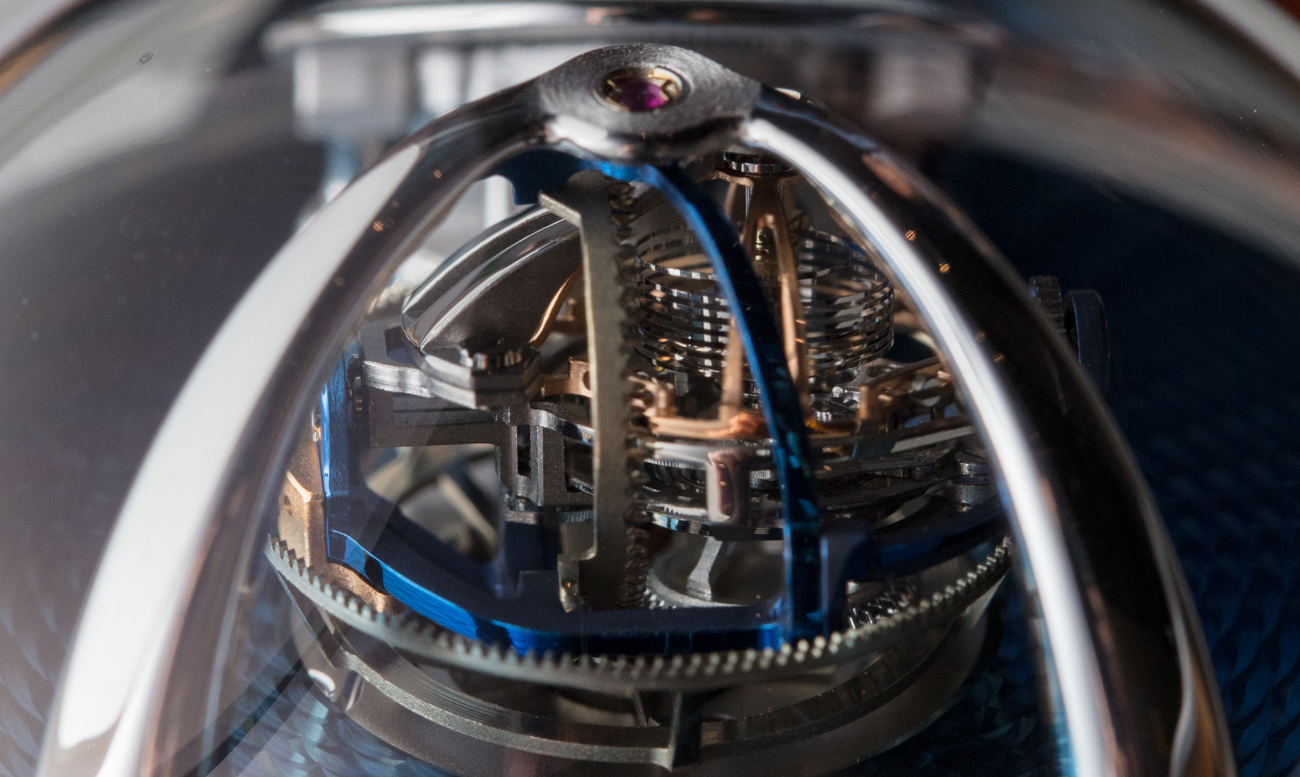 Indeed, “Thunderdome” is borrowed from the Mad Max movie of the same name. MB&F probably made the right call to put the Thunderdome in the classy Legacy Machine family, but given the theme, I can’t help but imagine what a Horological Machine version of the Thunderdome might look like. The main attraction in the dial is the triple-axis rotating regulation system with an inclined dial for the dial in front of it. Let’s talk a bit about TriAx and what it is all about.

Let’s be frank: The TriAx system is all about fun and animation. This is not a mechanism designed to solve any problems, but it does expand MB&F’s catalog of fascinating mechanism and records. Also note that, despite what it looks like, TriAx is not a tourbillon nor does it operate like a tourbillon. A tourbillon is a mechanism with a regulation system that moves around on its own axis, and that isn’t exactly what is happening here. In fact, the innermost rotating element is connected to the escapement — which itself rotates around the balance wheel. 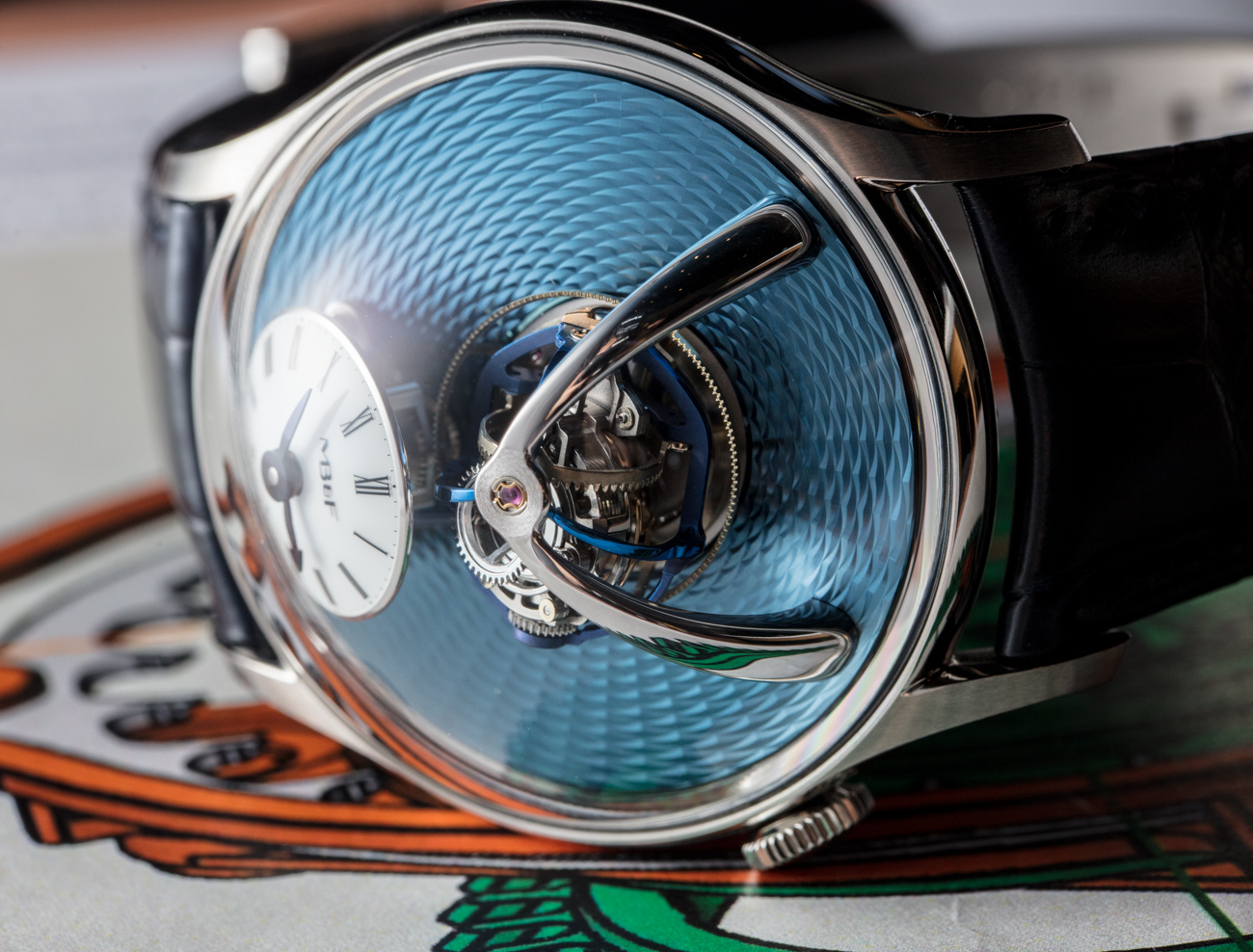 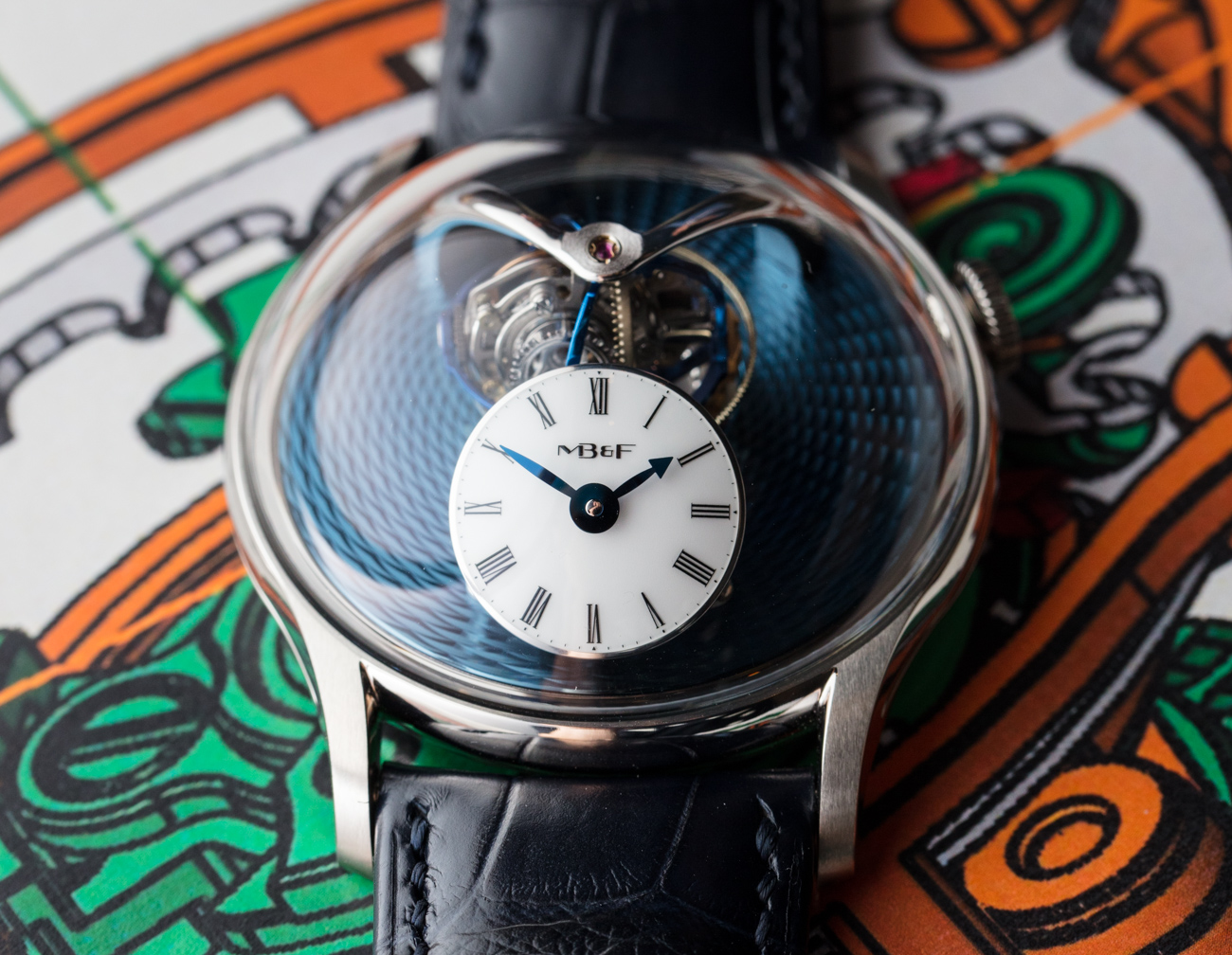 The balance wheel is actually “hemispherical” in shape, which is a first in a wristwatch design, as far as I know. Flat balance wheels are practical in wristwatches because they take up less space. Since the Thunderdome is all about providing interesting spaces to visually observe, the special hemispherical balance wheel and cylindrical balance spring do their job and are both functional and fun to look at.

It takes some close inspection, given how fast everything is turning in the TriAx system — you can see the innermost element turning once each eight seconds, the blued middle section (most of the TriAx is produced from titanium, I believe) rotates each 12 seconds, and the outermost cage rotates once each 20 seconds. The TriAx makes for a wonderfully fascinating little horological gyro that is mesmerizing to behold. MB&F could further improve upon the Thunderdome in the future by developing better anti-reflective coating on the dramatically domed sapphire crystal so as to improve visibility of this very viewing-friendly watch mechanism. 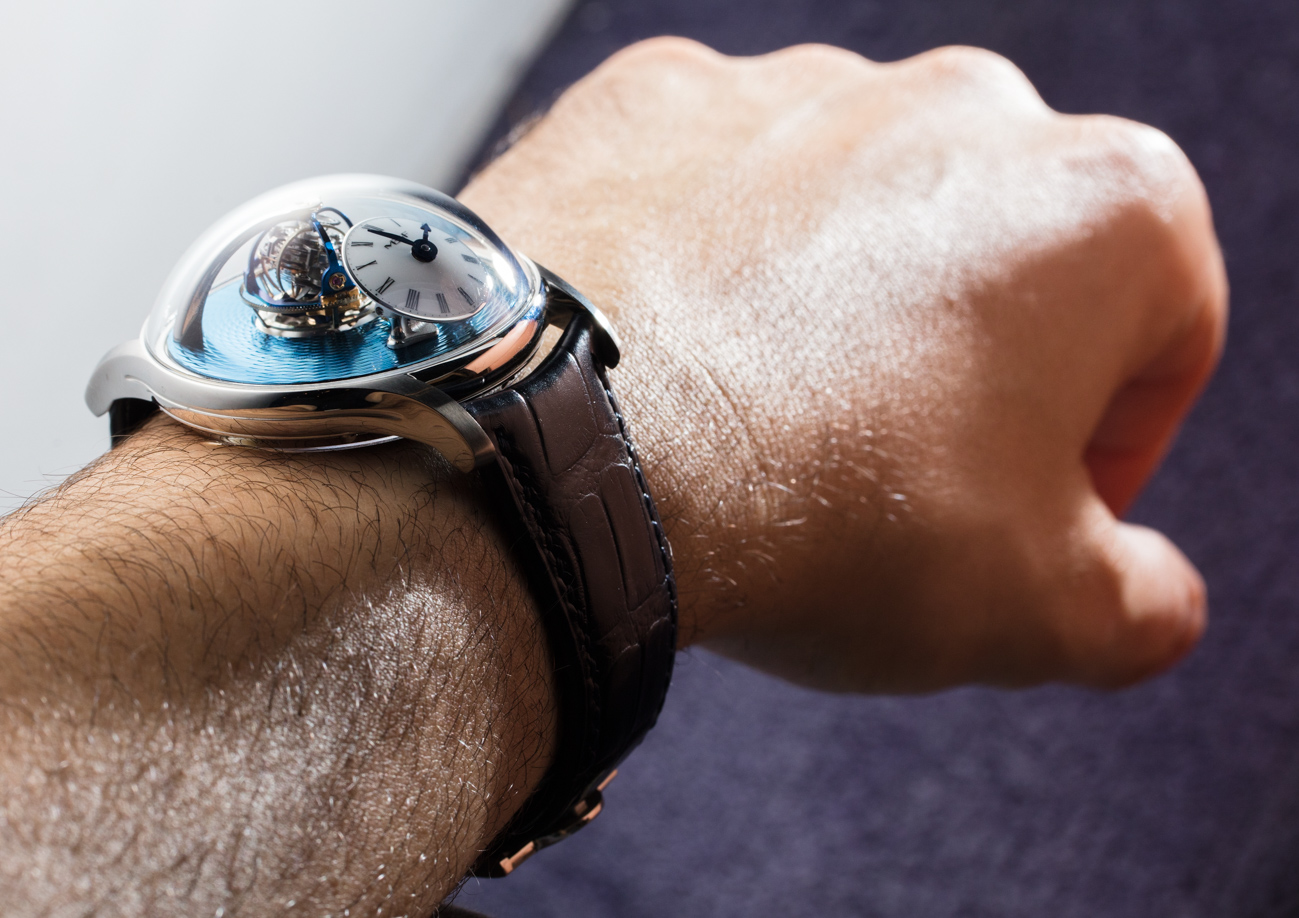 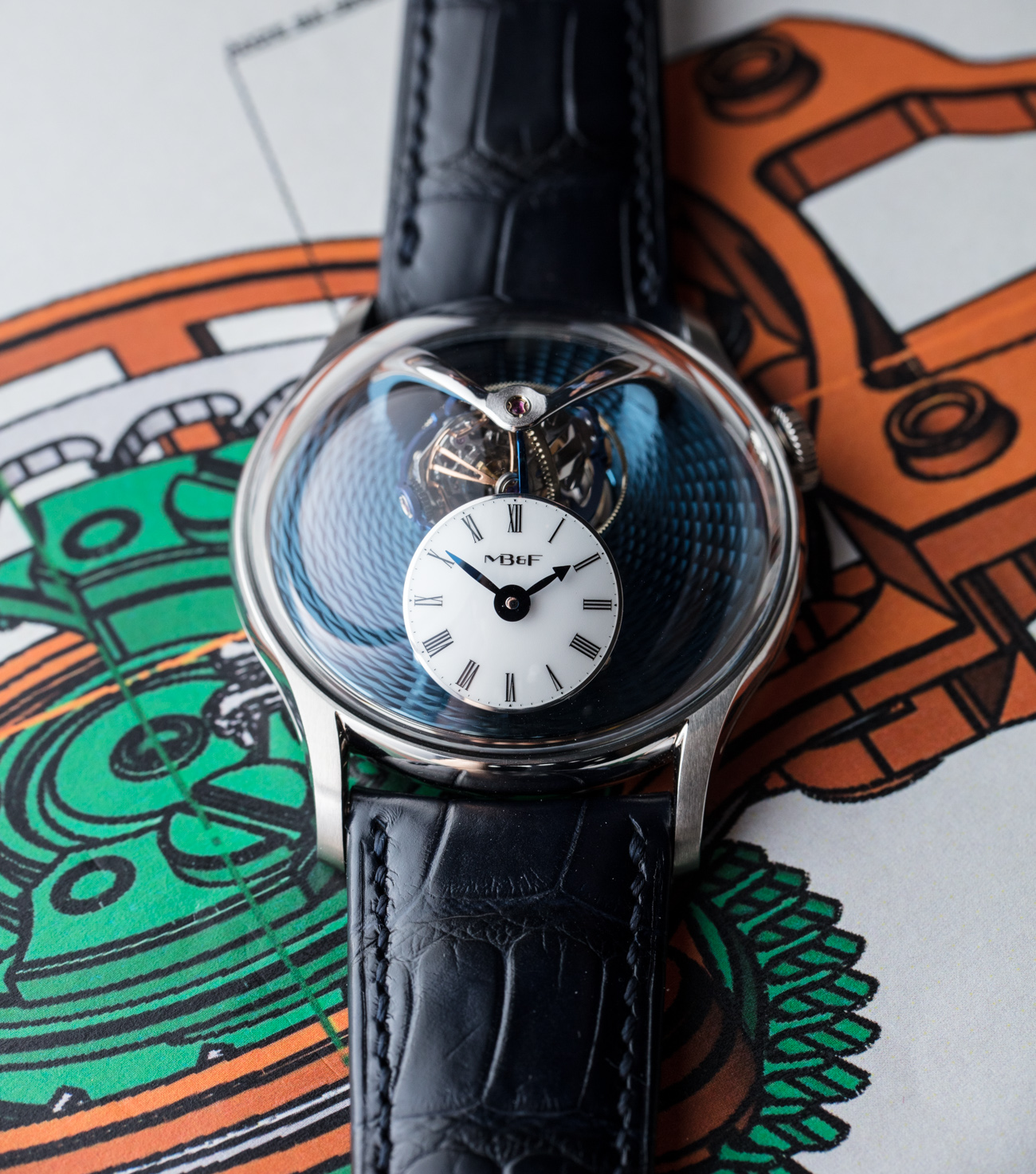 Eric Coudray’s fame comes from his work at Jaeger-LeCoultre, where he developed the famous Gyrotourbillon system for the brand. He later joined Cabestan to create more highly interesting mechanisms. His work is joined by Kari Voutilainen so as to make the system visually appealing in a haute horlogerie type of way. The Legacy Machine Thunderdome is very much a merger of the modern world of Coudray and the classic finishing world of Voutilainen.

The manually wound mechanical movement inside the Thunderdome is as complex as it is cool. Built from 413 parts, the Potter-style regulation system operates at 3Hz and the mechanism has a power reserve of 45 hours among three mainspring barrels (very power-hungry movement). The dial of the watch indicates just the time with hours and minutes (no traditional indication of seconds) and a power-reserve indicator is located on the movement, visible through the rear of the case. An interesting trick of the movement is the use of gearing to operate the inclined dial for the time on the face of the watch. 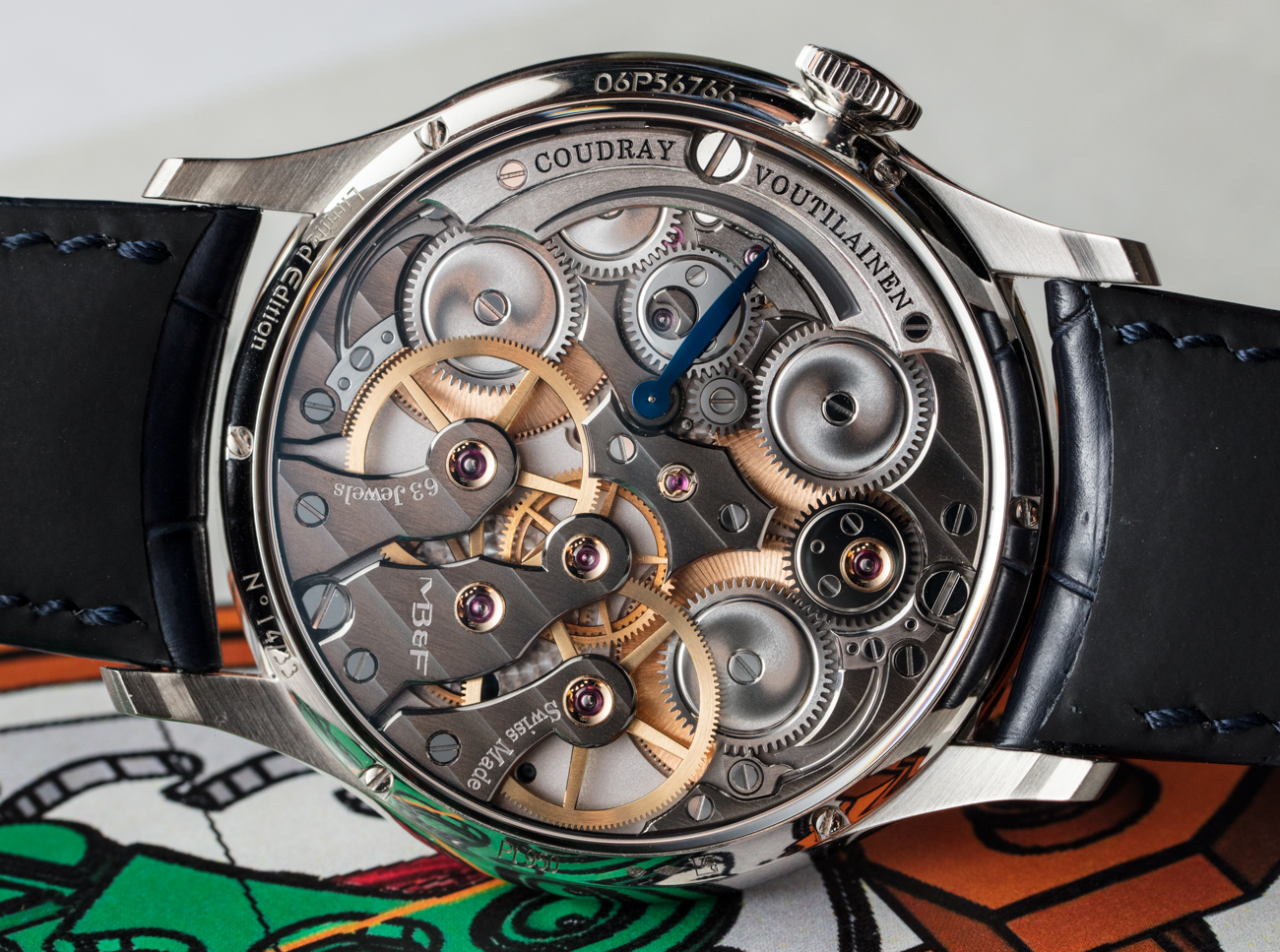 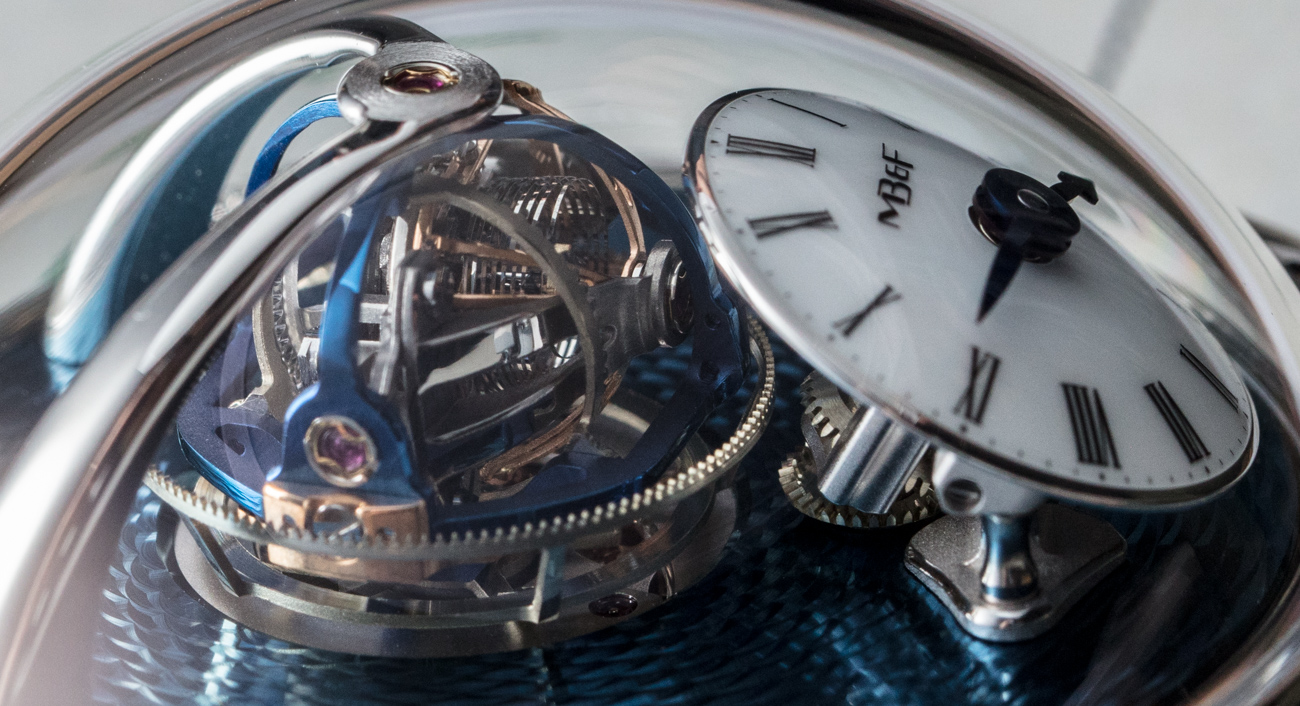 At 44mm-wide in platinum, the MB&F Legacy Machine Thunderdome is large but very wearable. The biggest visual heft comes from the steeply domed case. Those skeptical about its wearability need only consult with the many happy customers of MB&F’s other “tall” watches. 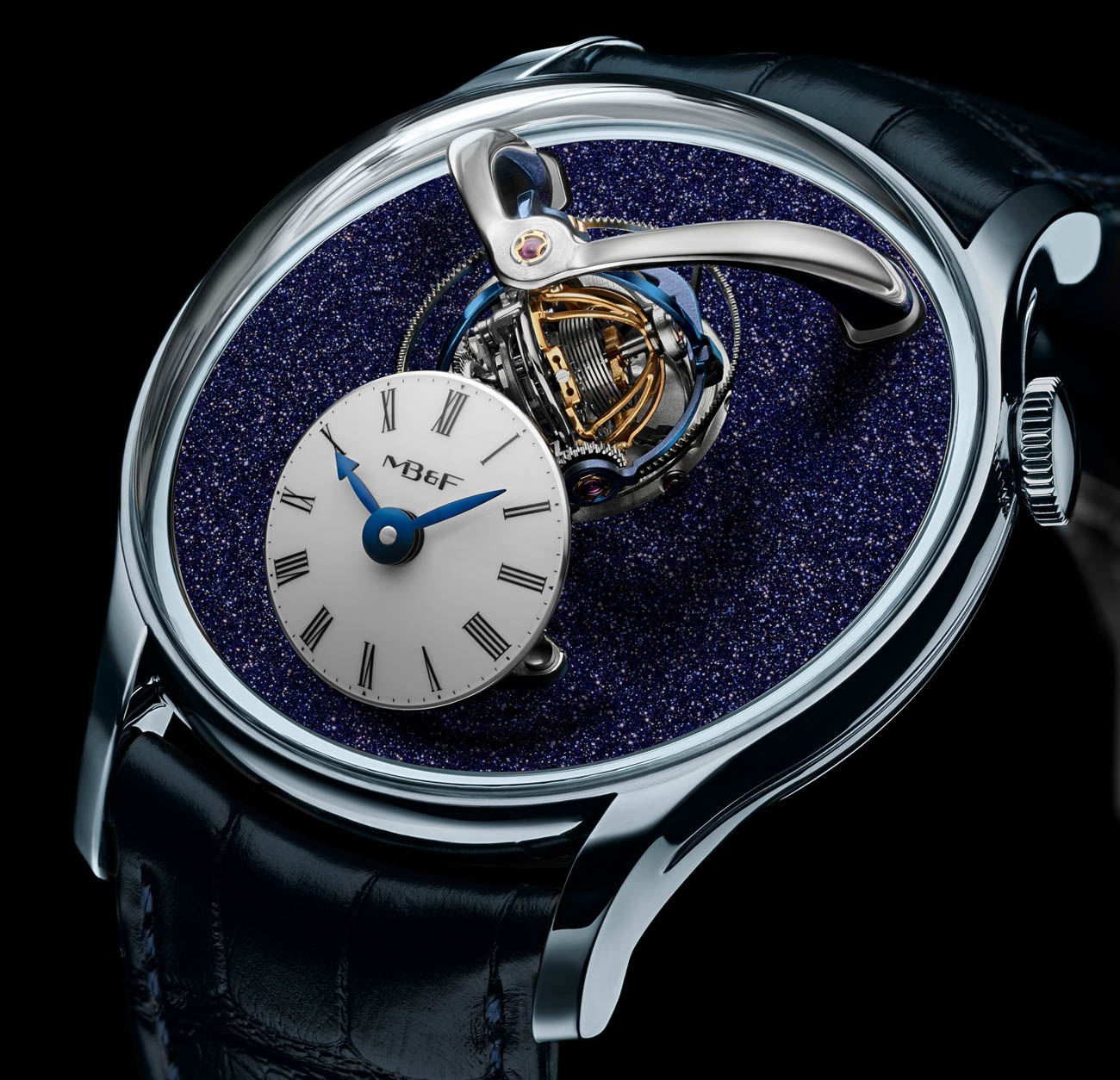 Limited to just 33 pieces in this form (platinum with the light blue guilloche dial), MB&F will likely have little trouble selling the Thunderdome watch despite its stately price point. The dial of the two limited editions (of five pieces each) tantalum/aventurine and dark-blue guilloché, respectively. The TriAx concept deserves to be further iterated upon (hopefully in futuristic form, at some point) in future MB&F timepieces because the allure of the fast-moving TriAx system brings a genuine smile to your face as you inspect its operation. Mind you, the mechanism is just for fun. Then again, all good timepieces these days are essentially toys. This just happens to be among the most complicated and luxurious of them. Price for this platinum MB&F Legacy Machine Thunderdome watch is $280,000 USD. Learn more at the MB&F website here.