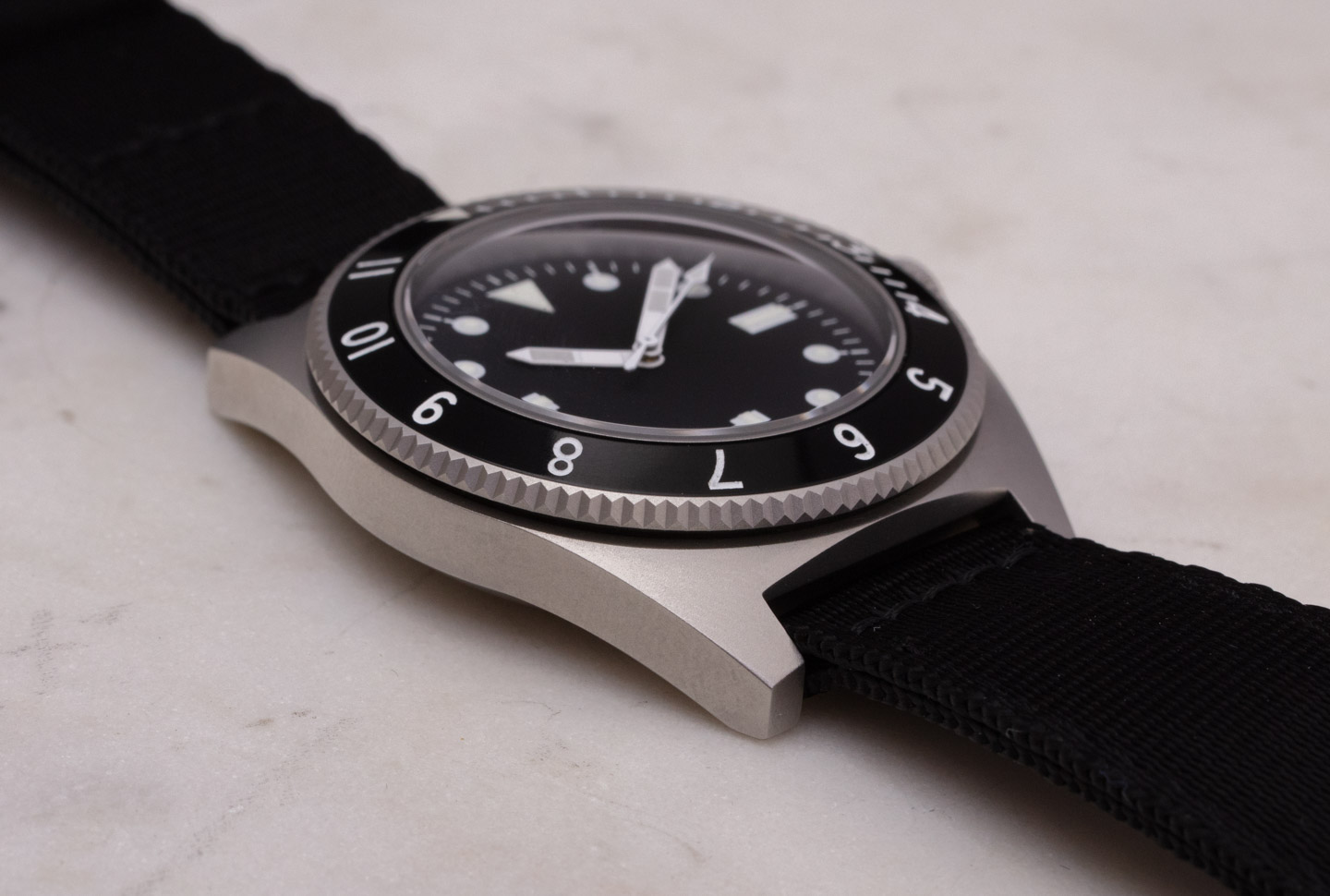 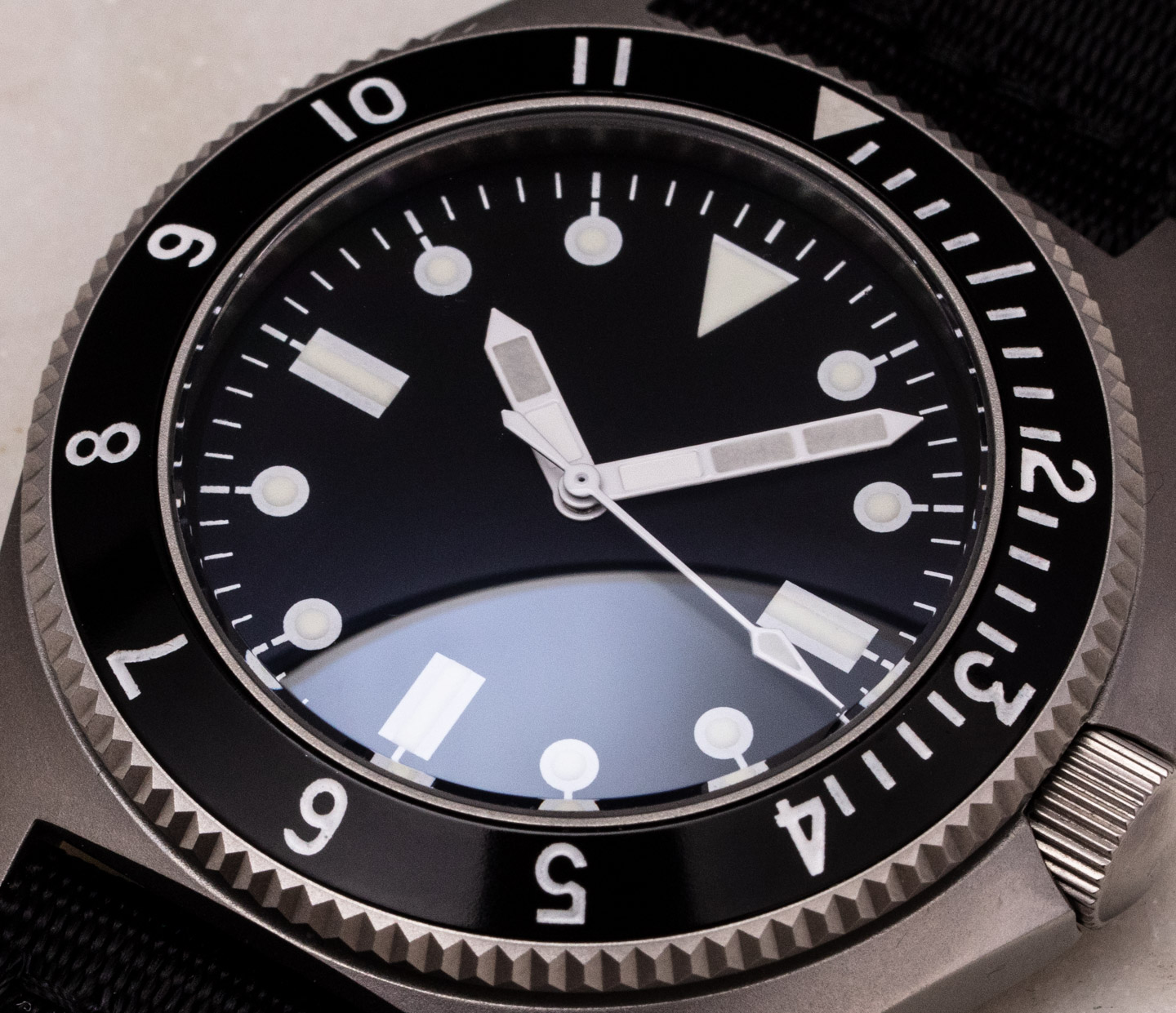 Classic American brand Benrus is a storied civilian and military watchmaker with loads of history. In its modern incantation, Benrus focuses on producing a few vintage-revival watches that help celebrate key points and products across the lifespan of the company, which was originally founded in 1921 by Mr. Ben Lazrus (who combined his first and last name to create the Benrus name). In the early 1970s, as an existing military watch supplier, Benrus created a purely military-issue watch series called the Benrus Type 1 and Type 2. These were practical dive-style watches meant for a variety of purposes, including the Army, Underwater Demolition Teams (UDT), and even the CIA.

The original Benrus Type 1 watches were never officially sold to civilians, but the product became famous given many of the important wrists wearing them. The core design has also been emulated many times. Take for instance the (also American) MkII Paradive, as well as the core look of the Bamford Watch Department Mayfair collection watches. Now Benrus returns with a vintage-revival version of the Type 1 as the reference T1-BB-BK-NS, which is meant to offer watch enthusiasts today the best of both worlds. By that, I mean a true-to-original version of the Type 1, along with the benefits of modern materials and product construction practices. 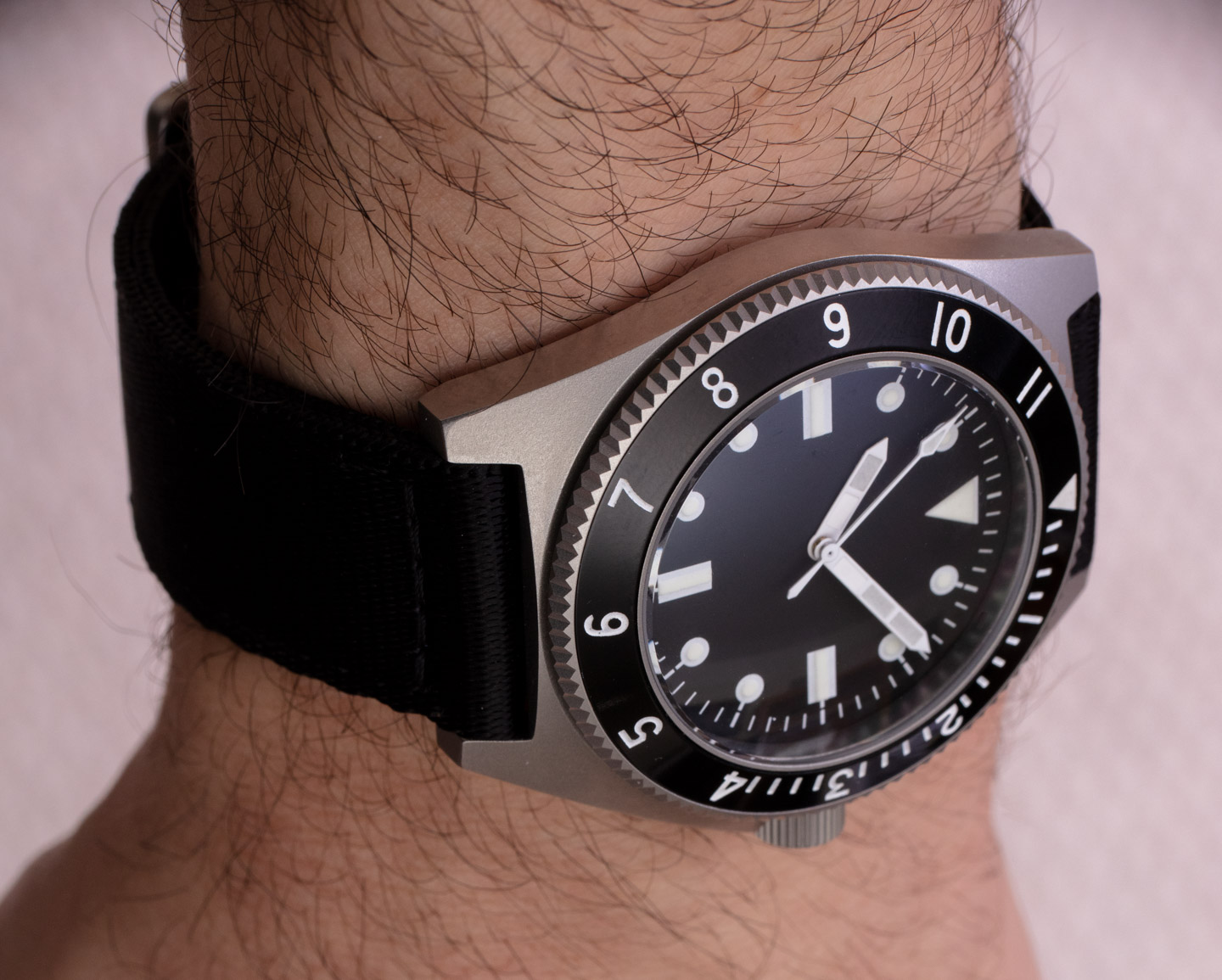 The modern Benrus Type 1 “Original Military Dive Watch” is a finely made product that clearly was intended to satisfy enthusiasts while also carrying on the tradition of what the Type 1 meant. Unfortunately, watches like this are only rarely worn by modern soldiers and government operatives, but the utilitarian appeal and ethos of the Type 1 watch are still appealing today.

The more iconic feature of the Type 1 watch is its asymmetric case shape and sterile dial, which is said to be the same size of the original 1970s Type 1 watches and is done in sandblasted steel. It has a water resistance rating of 300 meters and is topped with an AR-coated domed sapphire crystal. The watch uses a aluminum insert for the the bi-directional rotating bezel. Unlike most diver’s-style watches, the Benrus Type 1 bezel rotates in both directions. It also has a 12-hour bezel on it, which is different from the standard 60-minute timer. Like the original watch, the bezel doesn’t ratchet but rather moves smoothly (though securely). 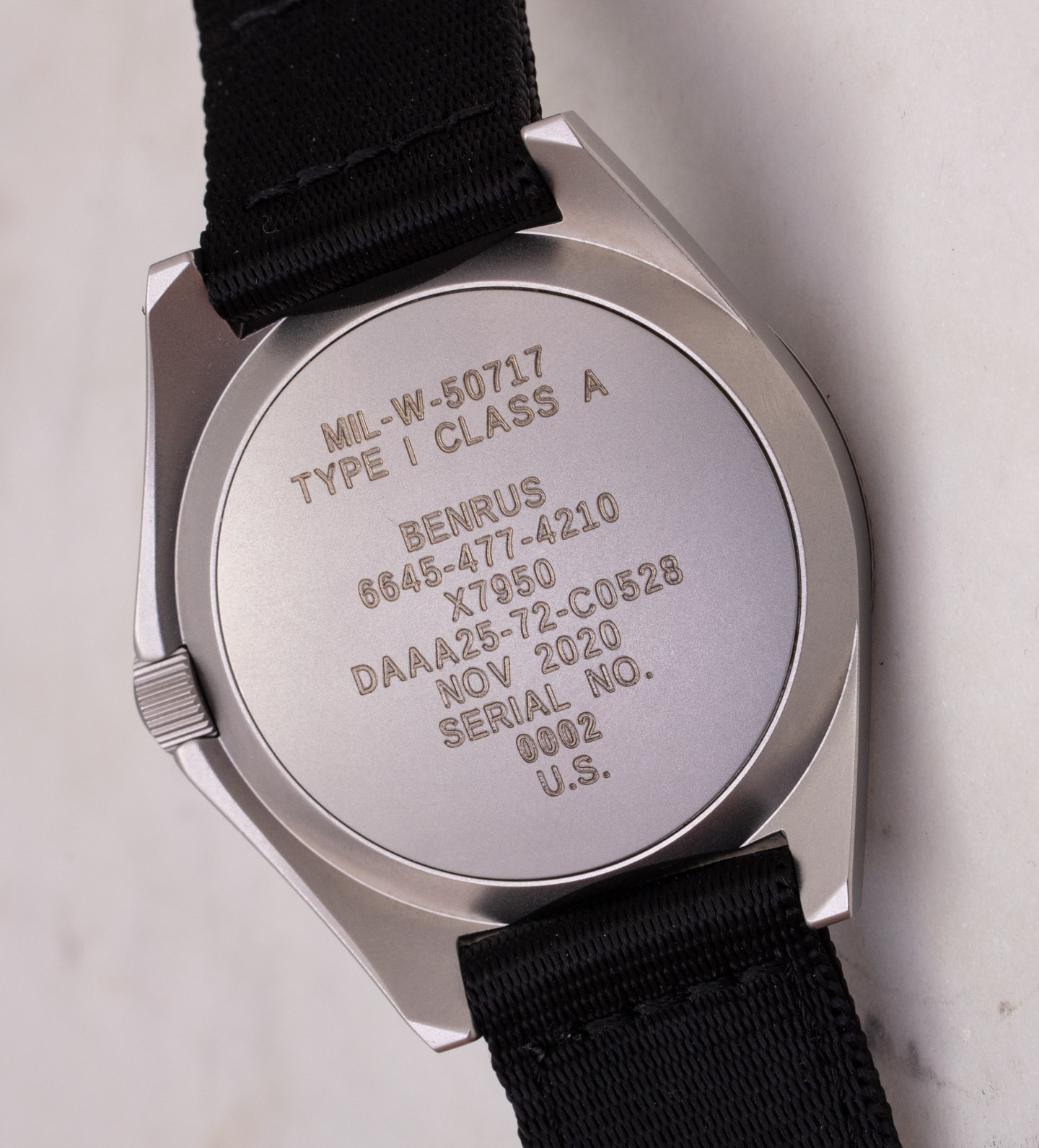 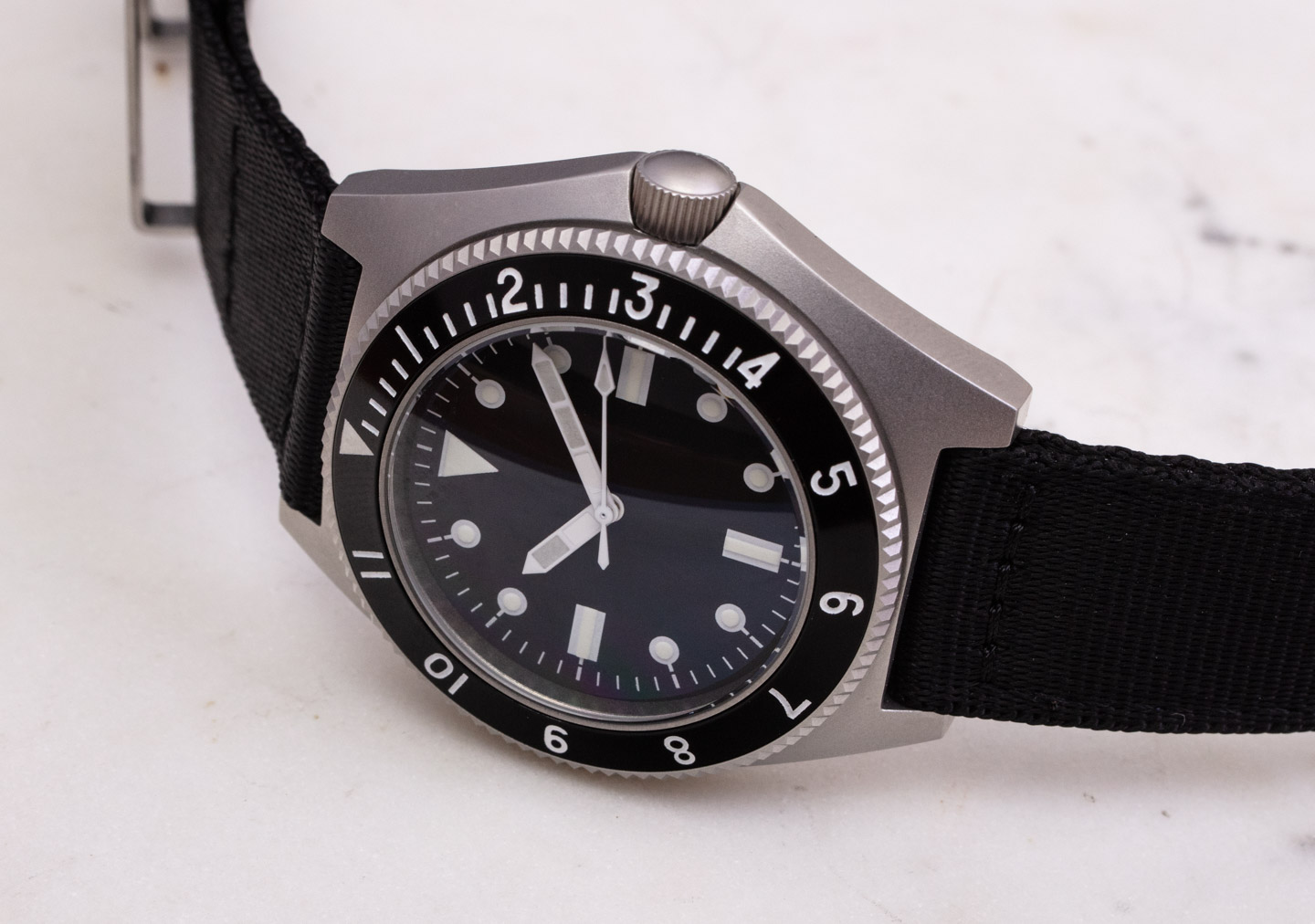 On the wrist, the matte steel case actually wears a bit smaller than its size might suggest. Benrus says the case is 42.5mm-wide, but with the crown, it is about 44mm-wide. It is also about 15mm-thick at its thickest point and has a lug-to-lug distance of about 47mm. It wears smaller than its size might suggest due first to the curved shape of the lugs, as well as the fact that with just the bezel, the case is only about 39mm-wide.

The asymmetric case design is due to the wide right side that doubles as the crown guard. A lot of fans enjoy this look, and it does indeed help give the Type 1 some personality. What is intentionally designed to remove noticeable personality is the sterile dial, which means that, aside from the hands and hour markers, the Benrus Type 1 dial has no brand name or logo on it. The matte black dial is flat with printed hour numerals, but depth is offered via the luminant (which is applied thickly in mostly rectangular shapes. With the Super-LumiNova-painted markers and hands, along with the high contrast between the face and said markers, the Benrus Type 1 dial is a successful exercise in supreme legibility. 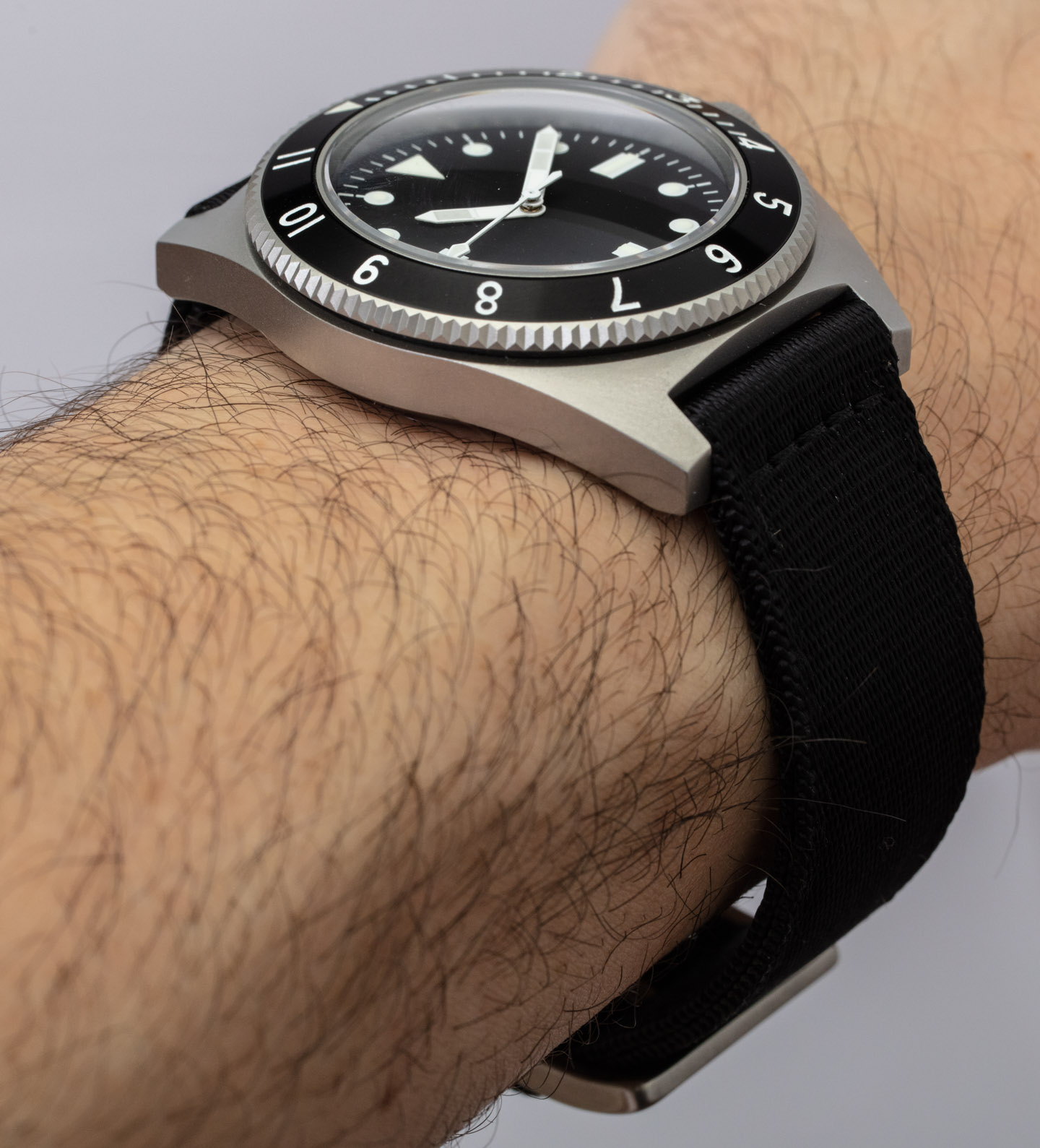 Inside the Benrus Type 1 watch is a common but reliable Swiss Made ETA 2681 automatic movement, which operates at 4Hz with about two days of power reserve. To keep the movement looking clean and true to original, the dial is totally symmetrical without a date window. The 2681 is a more compact mechanical movement that has been produced for a number of generations but isn’t often seen in too many modern tool watches. The rear of the watch case has military designation-style text, inspired by that on the original Benrus Type 1 watches that were issued to service professionals.

Attached to the case is a higher-than-average quality black nylon strap. Benrus calls the strap “seatbelt nylon” because it is double stacked unlike the normally thinner nylon weaves used on NATO-style straps. The strap fits to the case as normal straps do (not like NATO) straps and is very comfortable to wear. That said, the stock black seatbelt nylon strap is a bit on the long side. I believe Benrus has shorter straps, but if you have seven-inch circumference and under wrists, you’ll need to ask Benrus for one of its shorter straps. 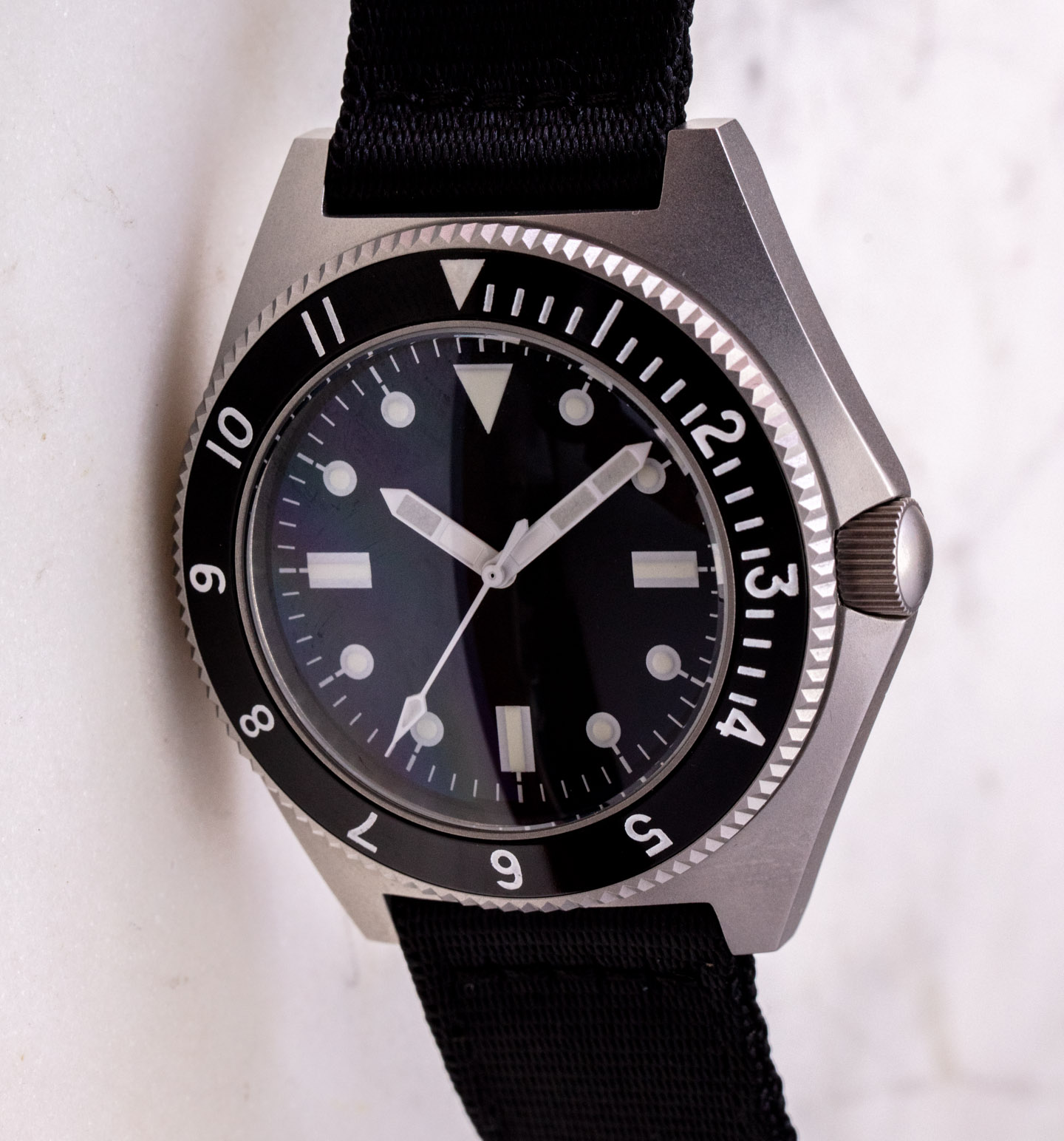 A large number of wristwatch collectors enter the hobby via their passion for military watches. For them, the history of the Benrus Type 1 is probably enough to make this modern recreation of the historic pieces appealing. Anyone interested in wrist watch history cannot remove the importance of military and diving watches from the equation, and thus models like the Benrus Type 1 are a very purist-friendly way to enjoy one of history’s greatest tool watches.

There are also the people who originally wore these watches for active duty. There is a real romance in thinking of their international exploits and the dangerous situations and environments Benrus watches (and their wearers) were subject to. To have a watch design on your wrist that is meant to survive through all that danger is exactly what a circa 2021 dangerous and unpredictable world needs. You might not know what challenges lie ahead, but it’s nice to know the watch on your wrist is probably ready for it. Price for the Benrus Type 1 reference T1-BB-BK-NS watch is $1,695 USD. Learn more at the Benrus watch website here.