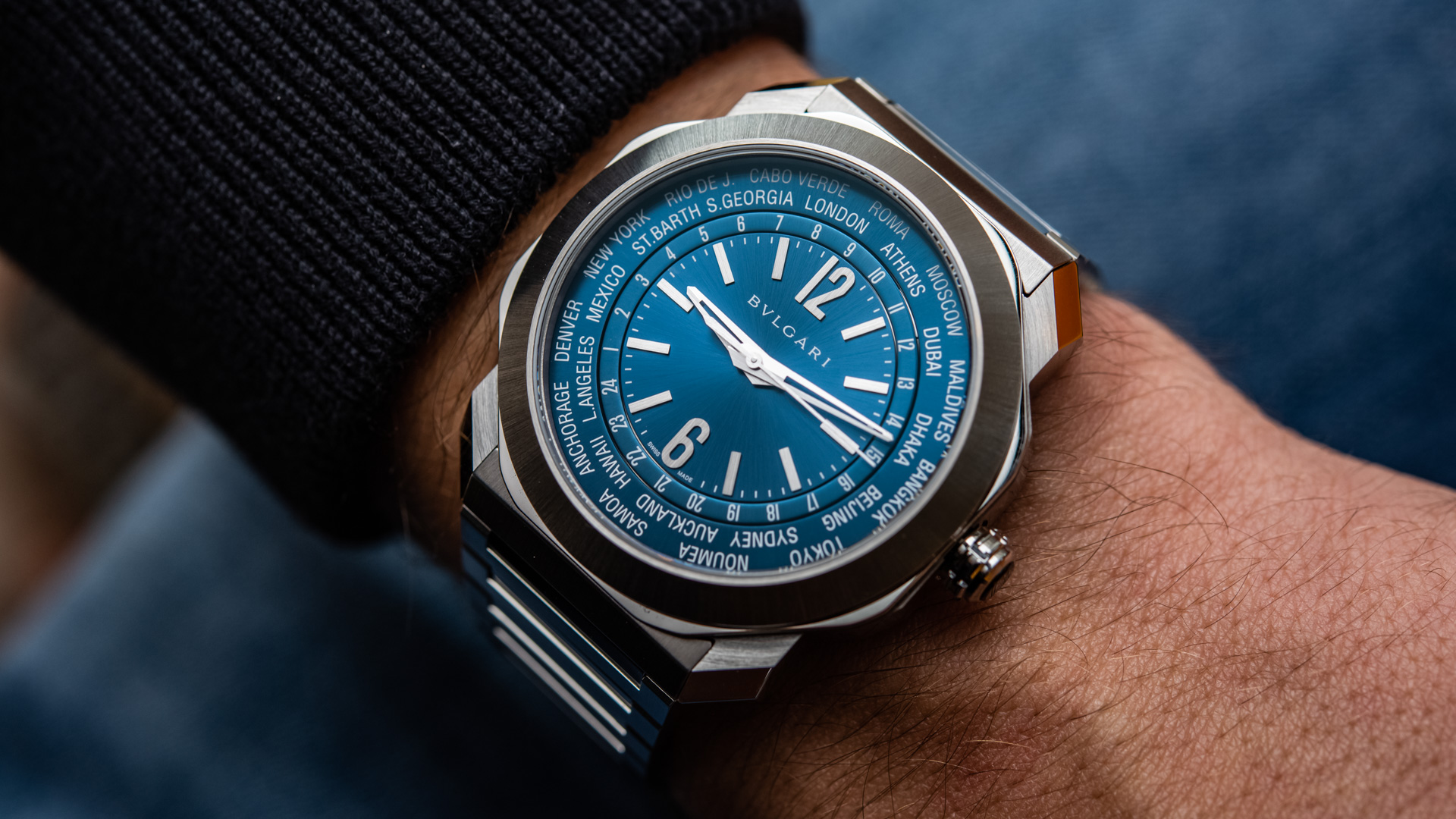 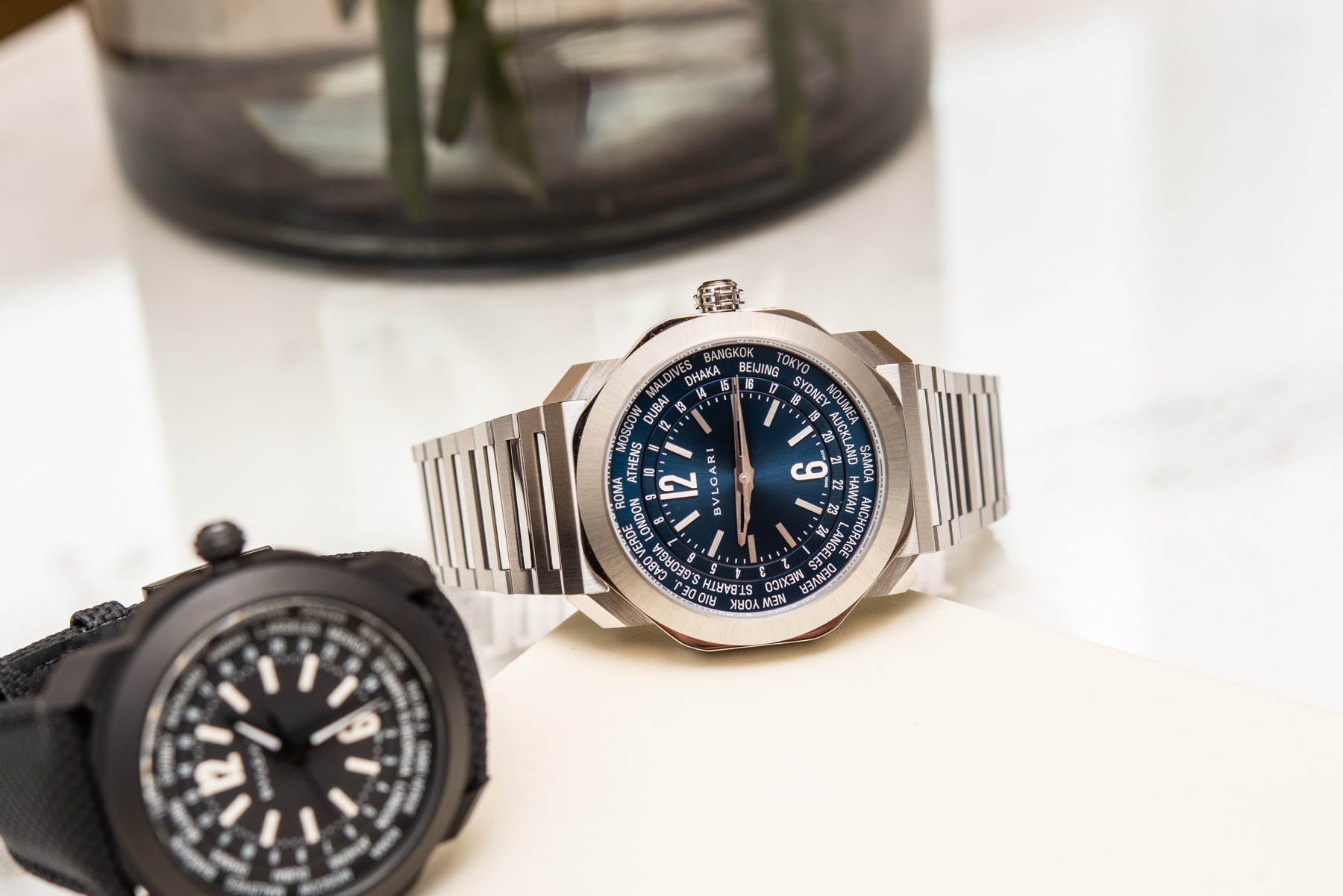 For 2021, BVLGARI adds a worldtime complication to its stable of everyday luxury watches with the BVLGARI Octo Roman WorldTimer that we debuted on aBlogtoWatch here. Rather than incorporate the popular complication into the main Octo collection, BVLGARI decided to build the WorldTimer out of an Octo Roma case across two debut models. You may recall the BVLGARI Octo Roma’s debut back in 2017 on aBlogtoWatch here. The goal of the Octo Roma was to create a more round-wearing version of the more square-cased Octo. Thus, BVLGARI’s lead designer did everything possible to create a round watch with the visual experience of the angular Octo. I still think he did a good job.

Patek Philippe, Girard-Perregaux, and Frederique Constant are all companies that have (at different price points) produced more or less this worldtime complication at various points. At just over $8,000, BVLGARI is true to its brand but is certainly not the most expensive (nor the least expensive) worldtime watch option out there. BVLGARI does, however, make one of the most stylish worldtimer watches, yet I would have loved for the brand’s engineers to add a little something to the overall execution. BVLGARI has set such a high bar for itself that I almost expect innovation in style, as well as ergonomics. So this is a good worldtimer watch, even if it is more or less the same worldtimer watch many have come to know (just never in BVLGARI flavor). 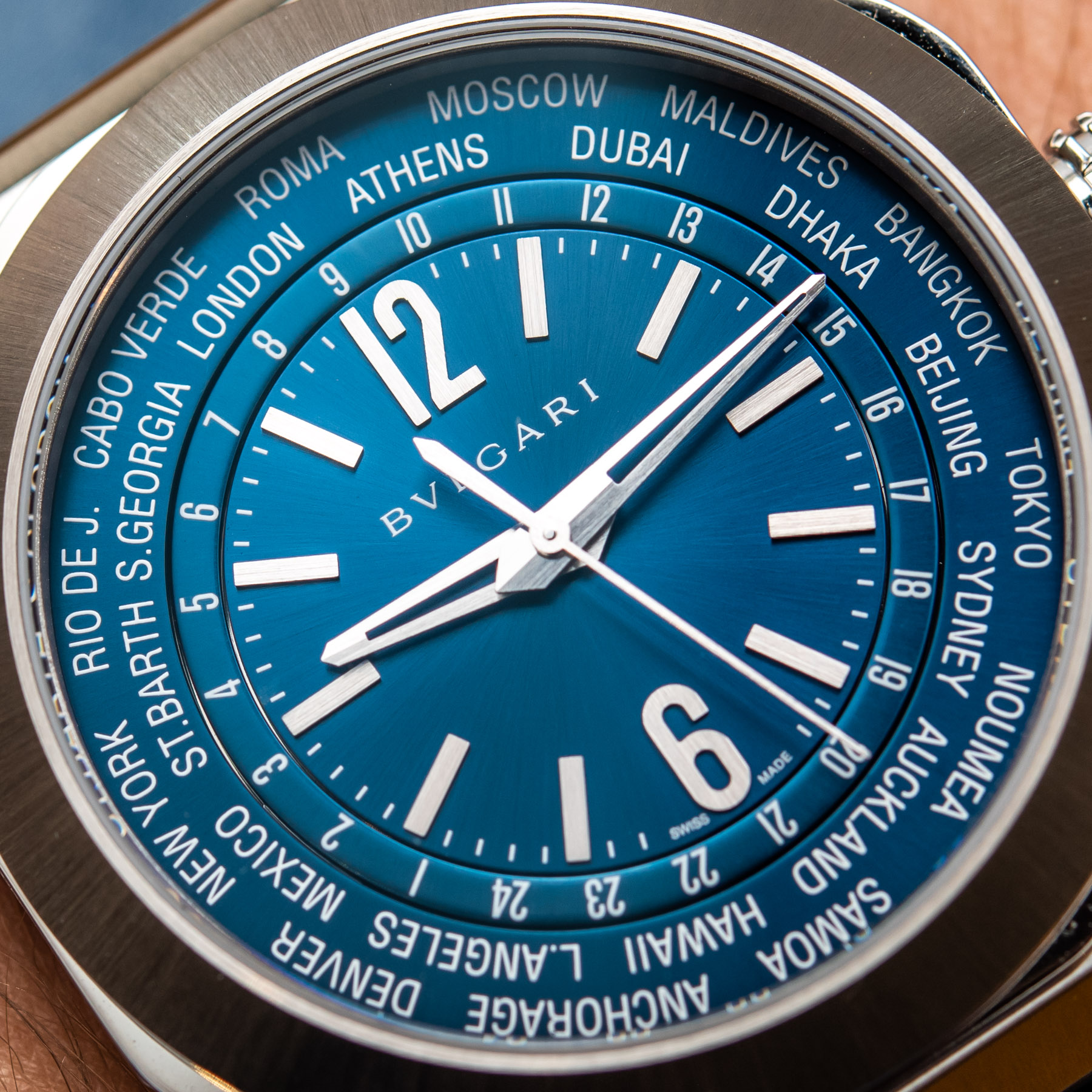 While GMT and worldtime watches perform relatively the same way, they have slightly different display systems that give the watches a different functionality. Around the dial for the time is a disc (rather than, say, a GMT hand) that makes one full rotation every 24 hours. Outside that ring disc is another disc that has reference city names on it. That outer disc turns in one-city increments manually by the wearer, orienting the disc so that the current time zone’s reference city is at the top above the 12 o’clock position. Once the watch is set like this (as well as with the accurate local time), it is just a matter of looking at what number on the 24-hour scale is currently lined up with the reference city of any of the main 24 hour time zones you want to know the hour in. It’s a pretty simple, yet highly effective system to tell the time, which has endured for generations. And now you can enjoy it in a BVLGARI Octo Roma.

From a value perspective, what is interesting is that the Octo Roma WorldTimer watch has a roughly $1,700 price difference from the three-hand Octo Roma version. They both use the same in-house-made BVLGARI base automatic movement, but the worldtime version has an extra module and added prestige of a more complicated watch. So from a sheer money perspective, the BVLGARI Octo Roma WorldTimer seems like a good buy. 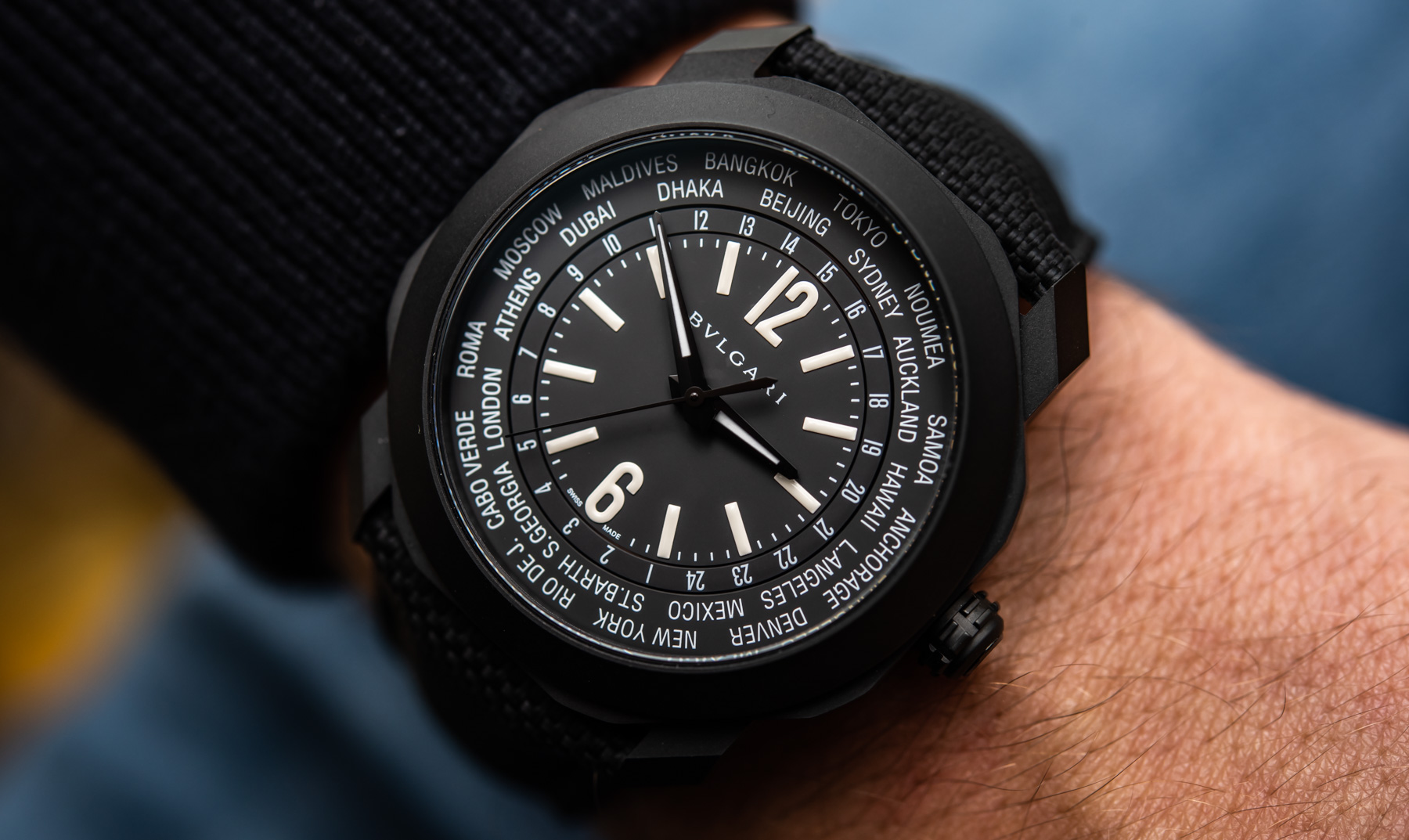 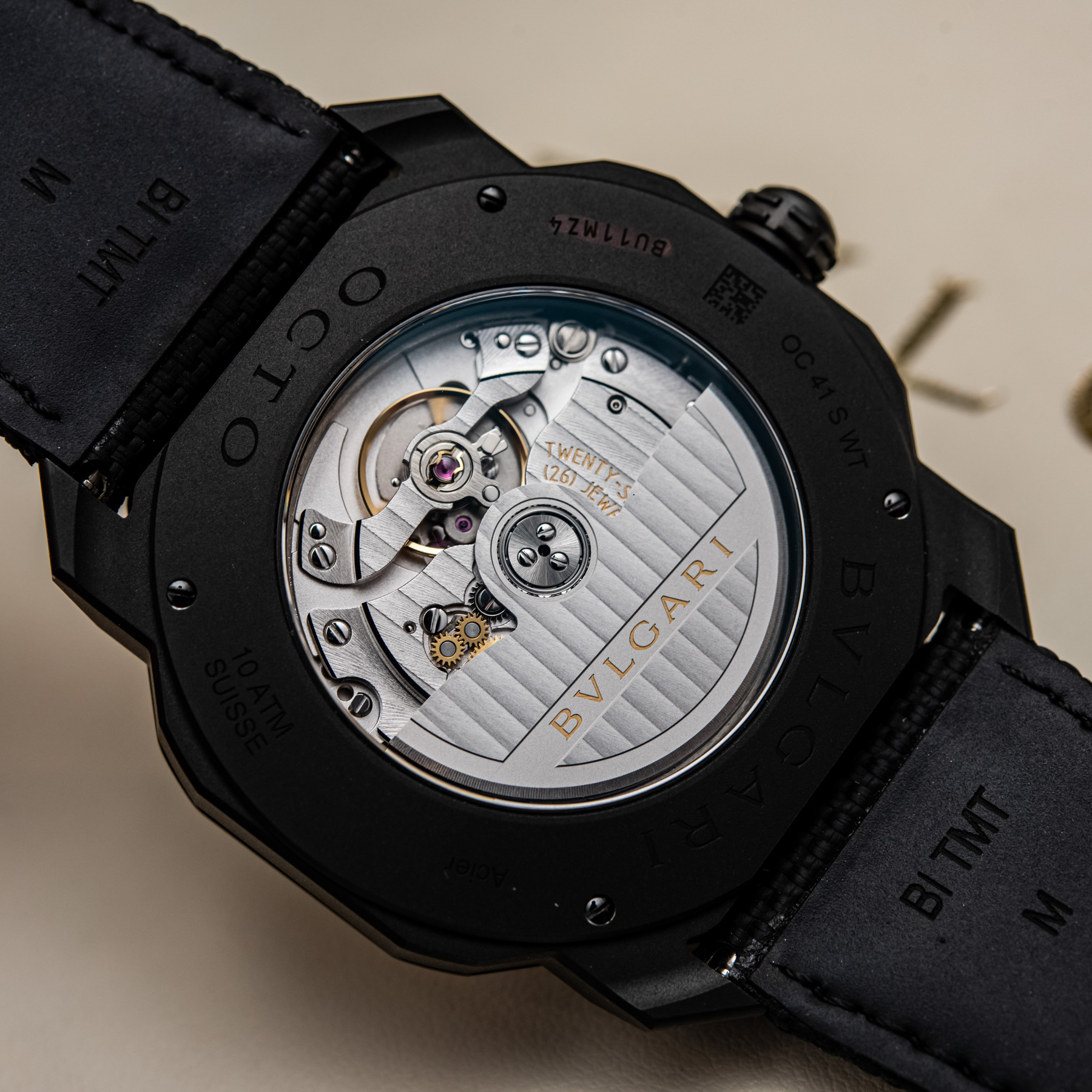 The movement inside the watch is the BVLGARI caliber BVL 257 automatic movement that operates at 4Hz with about two days of power reserve. You can admire the nicely finished movement through the sapphire crystal caseback on the rear of the watch. The case itself is 41mm-wide and about 11mm-thick (about the same as a Rolex Submariner). While that isn’t ultra-thin, I do think it makes for a good everyday wearing size. The steel case comes in two versions for 2021 being the reference 103481 in natural steel with a matching tapering steel bracelet and a blue-colored dial, and the reference 103486 in black-colored DLC-coated steel paired with a tapering black fabric strap and a military-clean black dial. 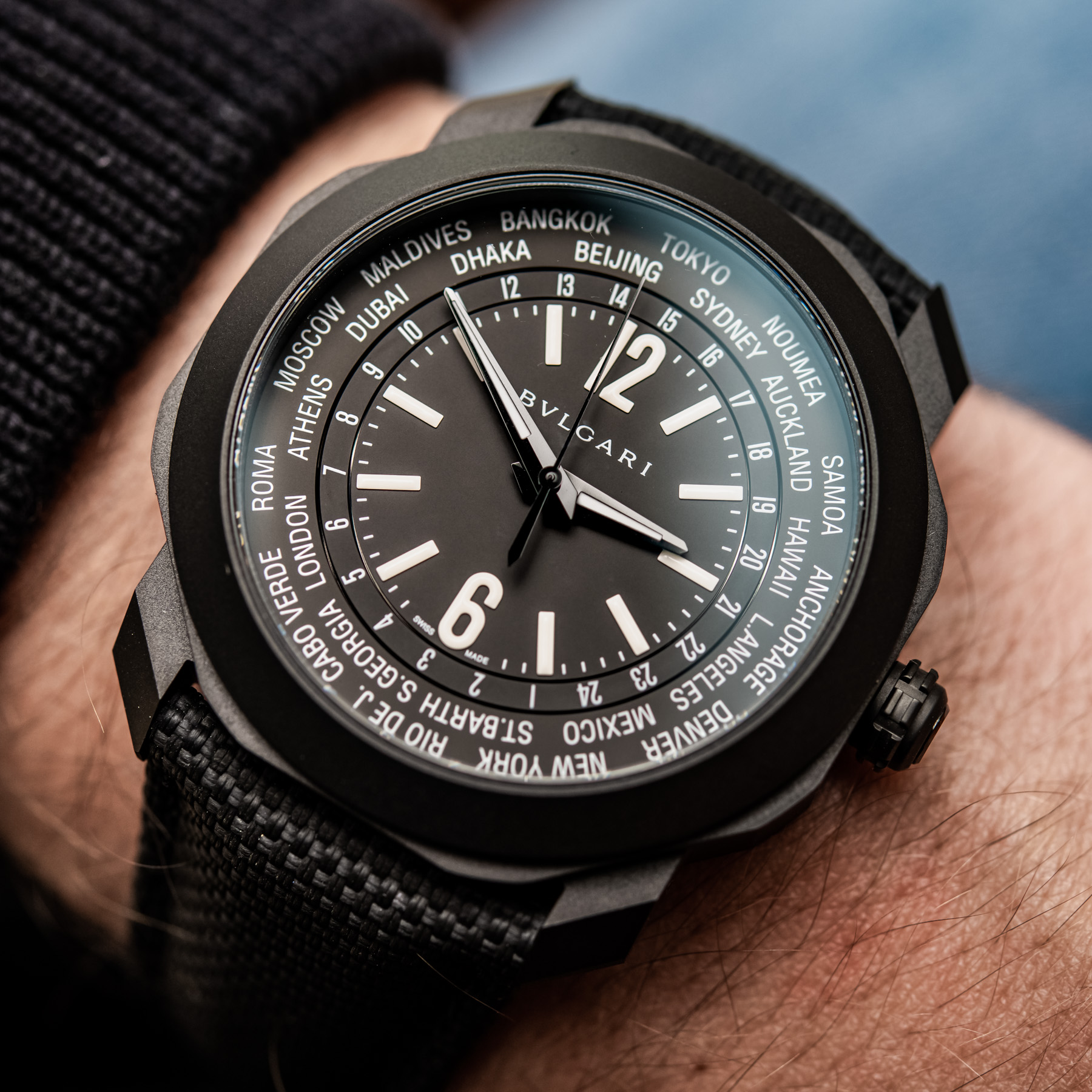 While both models are really nice, I am gravitating toward the black-colored Octo Roma WorldTimer on account of the more practical dial (and the hip stealth/tactical vibe of the overall product). This version has a luminant, meaning it is more legible in the dark, whereas the metallic blue dial is more dress watch — true to other Octo and Octo Roma models in being formal or mostly elegant in theme. That said, I can easily see both of these watches being enjoyed by your average global jetsetter who wants something versatile and pragmatic, but also a bit edgy and with the requisite BVLGARI Italian flair. Price for both versions of the BVLGARI Octo Roma WorldTimer watch is $8,350 USD. Learn more at the BVLGARI website here.