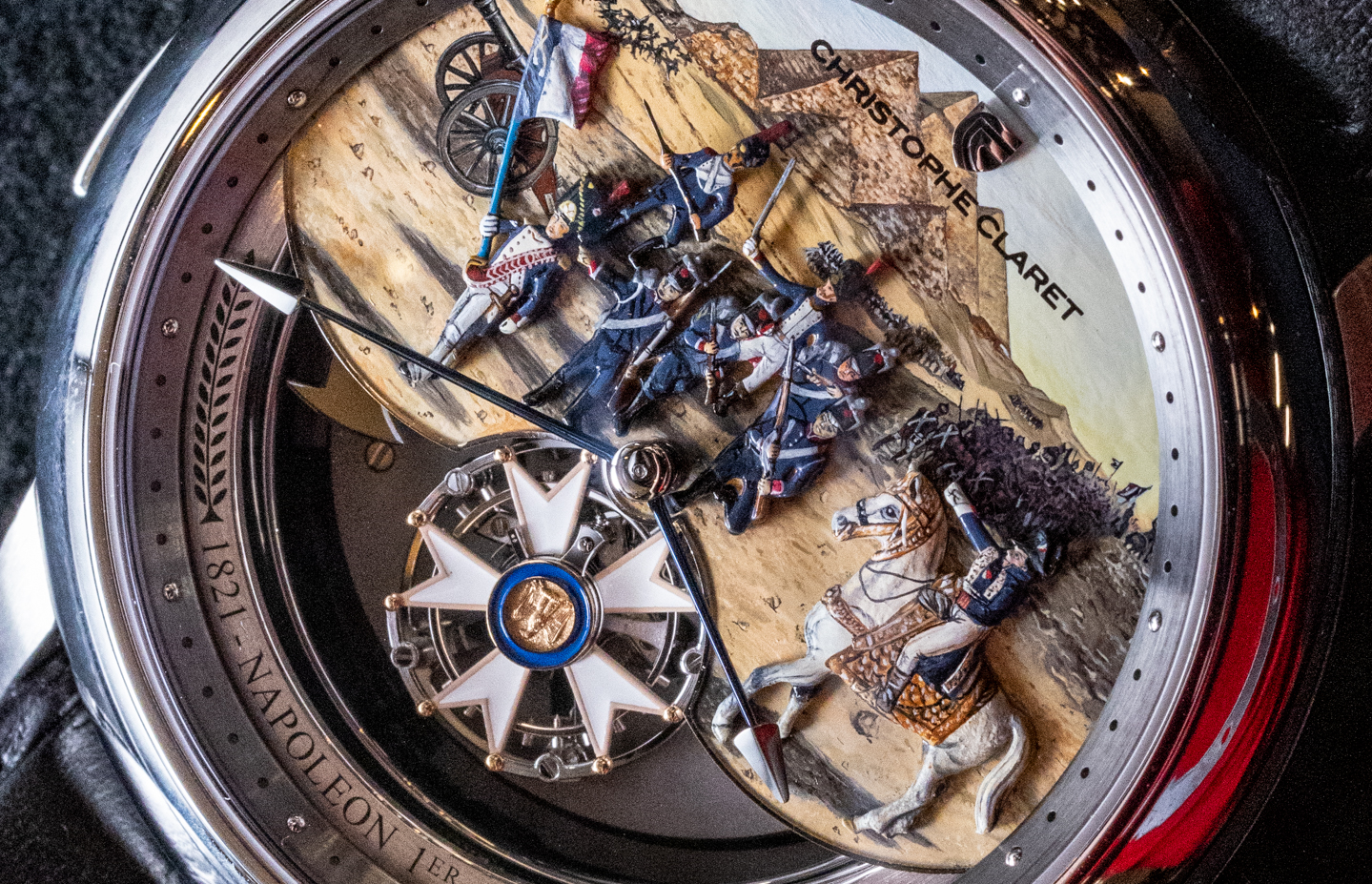 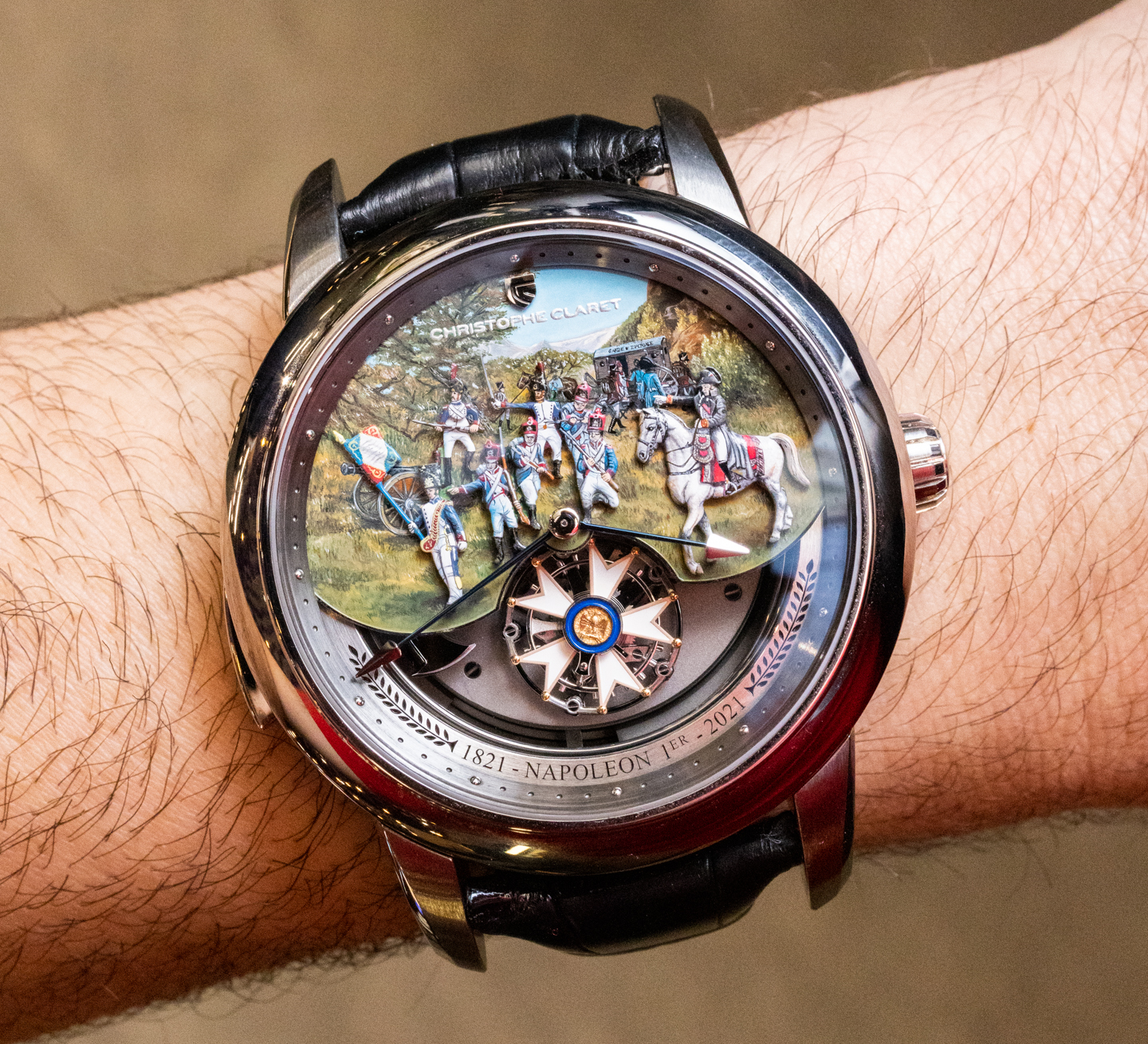 Even 200 years after his death, Napoleon Bonaparte is still a popular figure — so much so that when I posted an image of this Christophe Claret Napoleon watch (reference MTR.NBC98) on my personal Instagram channel, the post went viral. Few people from that long ago in history are still known to the world at large, and for many people, especially in and around France, Napoleon is still very much a hero. One person who apparently connects with the historical military leader is Mr. Christophe Claret, the talented French-speaking Swiss watchmaker of the eponymous brand. In 2021, he launched a small limited-edition series of Napoleon-themed watches each with a hand-painted automata-equipped dial and tourbillon, minute repeater movements.

The Christophe Claret Napoleon watches come in three dial variations, each offered in a titanium or 18k red gold case. Each of these versions will be limited to no more than eight pieces total as part of this limited edition. The inspiration for the watches was the 200th anniversary of Napoleon Bonaparte’s death in 1821. The hand-painted dials each celebrate one of Napoleon’s military campaigns. The bridge over the spinning tourbillon is made to look like the medal that celebrates the French National Order of the Legion of Honour (aka the Legion of Honour). This is a medal that special people can still earn today and was founded by Napoleon in 1802. In the middle of the medal is Napoleon’s eagle seal mark.

When the minute repeater function is in operation, the watch touts a series of jaquemarts that animate the dial. Jaquemarts are specific forms of automata that are connected to the working pieces of a minute repeater complication. For literally hundreds of years, such mechanical art has embellished complicated chiming clocks and watches. Luxury watches equipped with jaquemarts are still available today, produced in rarefied form by an assortment of the world’s top watchmakers. Christophe Claret made a mark for himself more than 25 years ago as a master of minute repeaters and other musical high-complication watches. Today, he continues that tradition with a solid movement architecture that he has been improving for years. Creating a minute repeater watch with a jaquemart populated dial is, in other words, right up his alley. Throwing a tourbillon-based regulation system in there simply goes with the high-end timepiece territory. 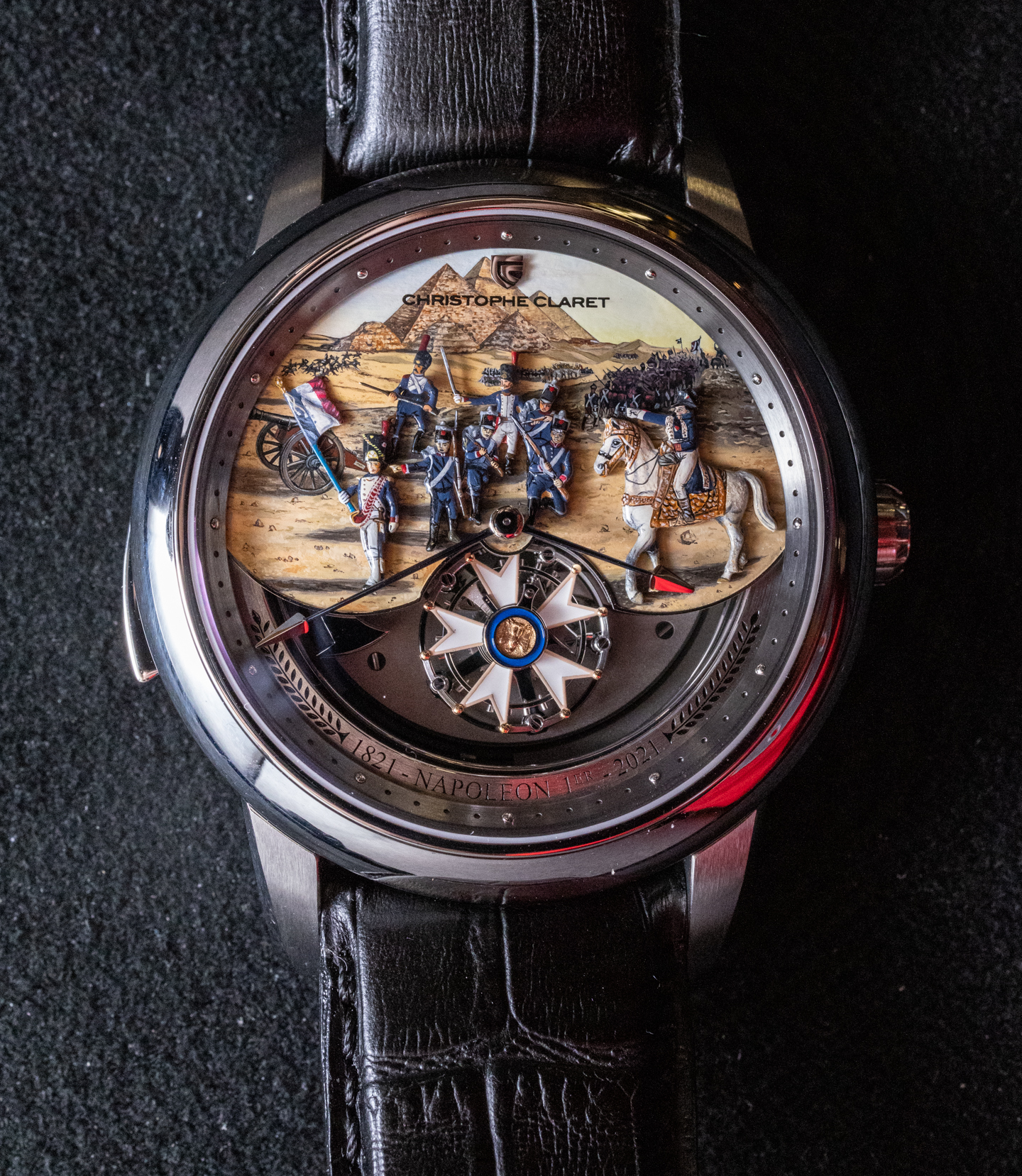 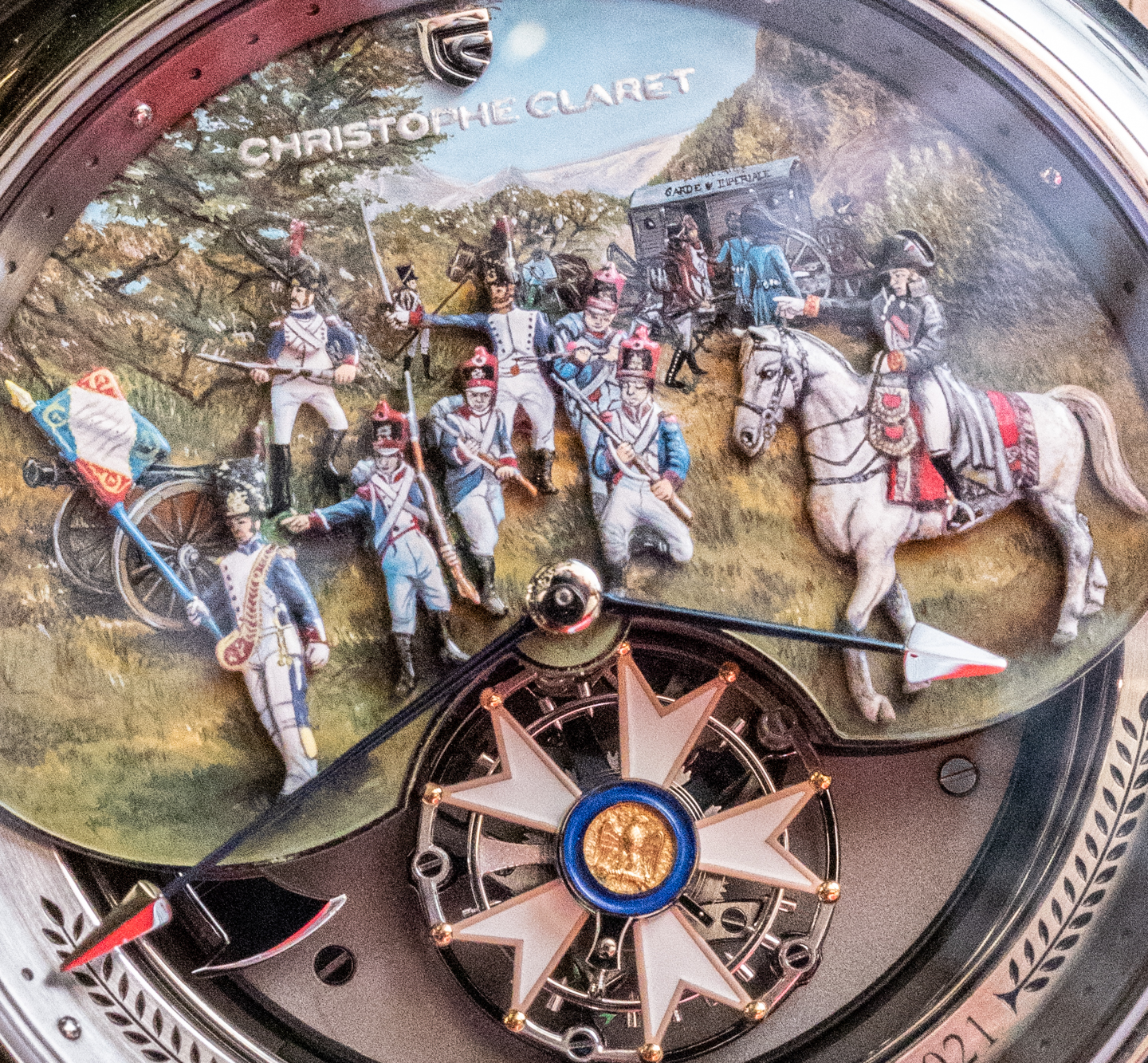 The watch dials include a hand-engraved base that includes a series of figurines and is then fully hand-painted in miniature. Such paintings are done under magnification using brushes that are often only a single bristle in size (squirrel hair is a popular choice, actually). This process can take weeks, if not months, per dial. When you spend money on a watch such as the Christophe Claret Napoleon, much of what you are paying for is the hundreds of hours of master craftsperson time. The detailing is rather intense, and when you look at even the small facial expressions and outfits of the painted military figures, it is hard not to be impressed by the artwork. 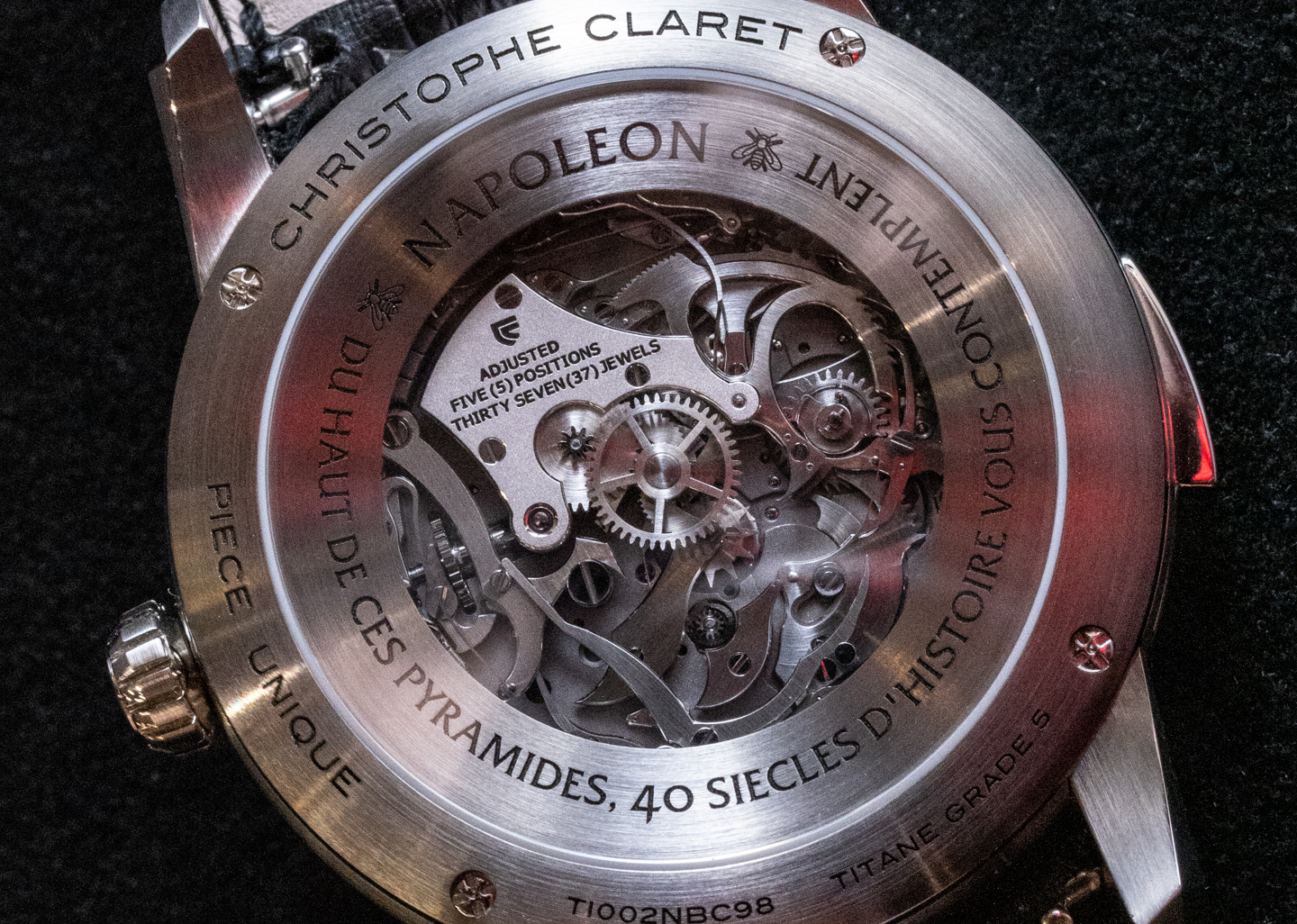 The movement inside the Christophe Claret Napoleon watches is known as the caliber NBC98. Made in-house by Mr. Claret, the manually wound movement is comprised of 511 parts and operates at 3Hz with 60 hours of power reserve. The 60-second tourbillon is matched with not only a minute repeater but a full Westminster Minute Repeater with cathedral gongs. That implies the level of musical notes and length of the sound-based time-telling chiming system. The four-note Westminster chimes are each connected to a jaquemart figurine on the dial. When the minute repeater is activated, the little figurines move around playfully. It’s very much a toy in how it makes you smile, but it makes you smile widely, nonetheless. The titanium version of the Napoleon watch naturally has a better chiming sound than the gold version given that titanium is a better resonating material than gold (which, by comparison, absorbs sound). That said, many people who purchase watches at this level still prefer to wear precious metals on their wrist, and thus, Christophe Claret offers each of the watches in both a titanium and 18k red gold version. 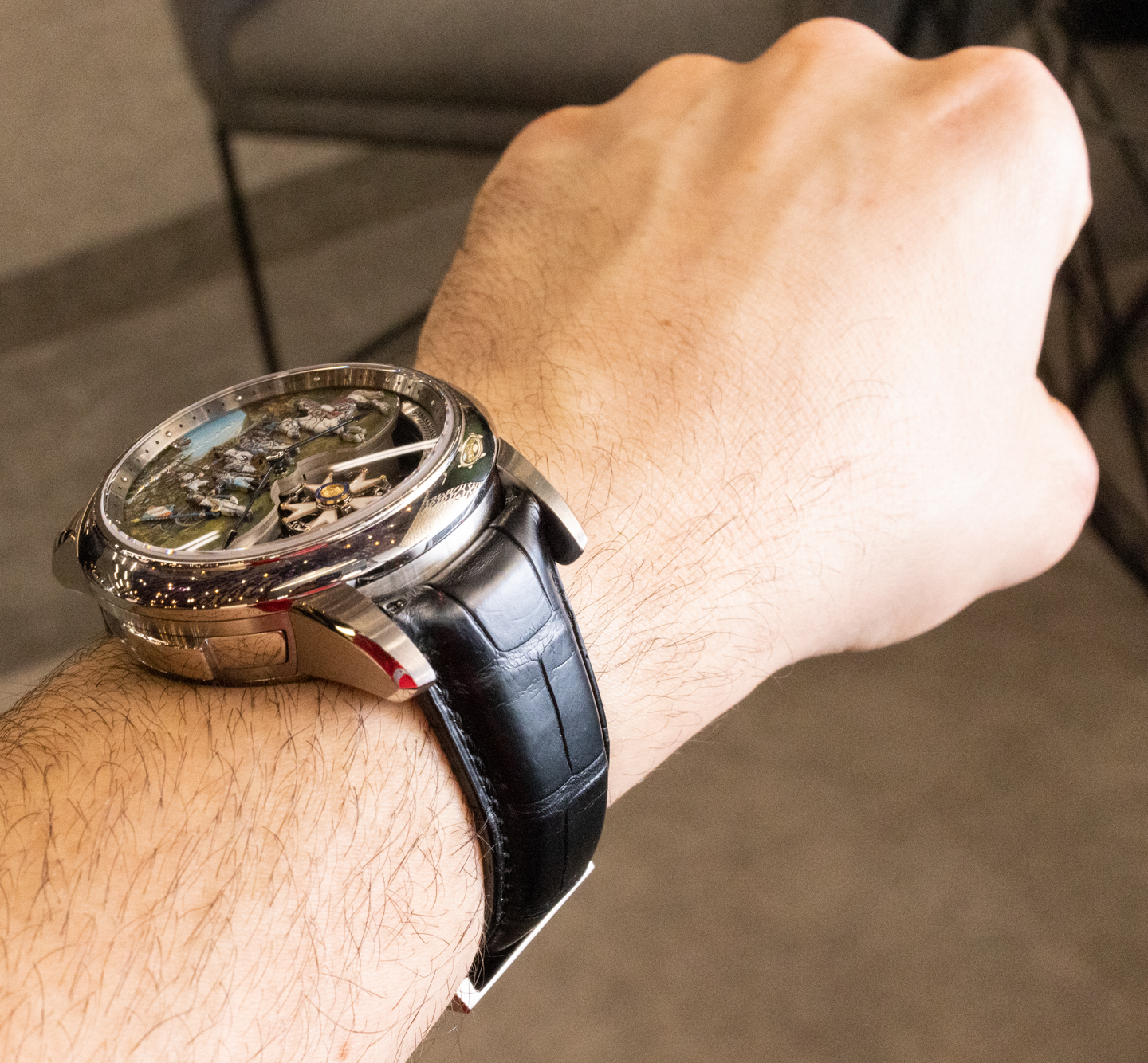 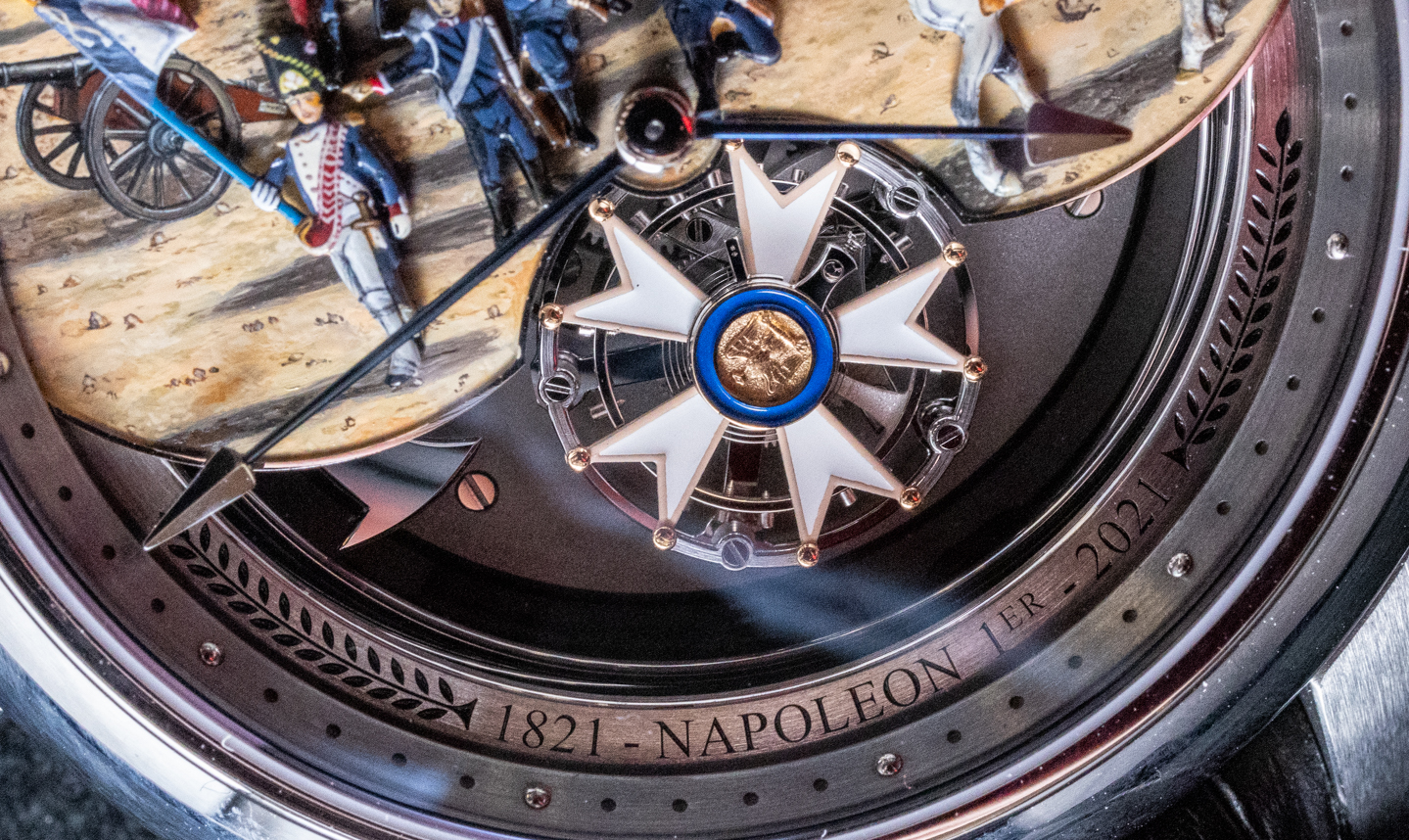 The watch case itself is on the larger side at 46mm-wide and 15mm-thick (water-resistant to 30 meters). You can see how it looks on my wrist, which is probably a bit too small for the longer lugs. But hey, when it comes to having a chance to wear a timepiece like this, I’m not going to let a little thing like a big case get in my way. Compared to most of Christophe Claret’s other modern watches, the round case is on the more classic side (he has a lot of futuristic or highly avant-garde watches under his name), but it isn’t boring or at all basic. Interestingly enough, the watch comes on a “vegetable leather” strap, as opposed to alligator or crocodile, which might be more expected on a wristwatch at this value. I do know that “vegan leather” straps are trendy from a marketing perspective, but it is nearly impossible for me to not consider “leather alternatives” as just less expensive forms of something you’d rather have (such as real alligator). 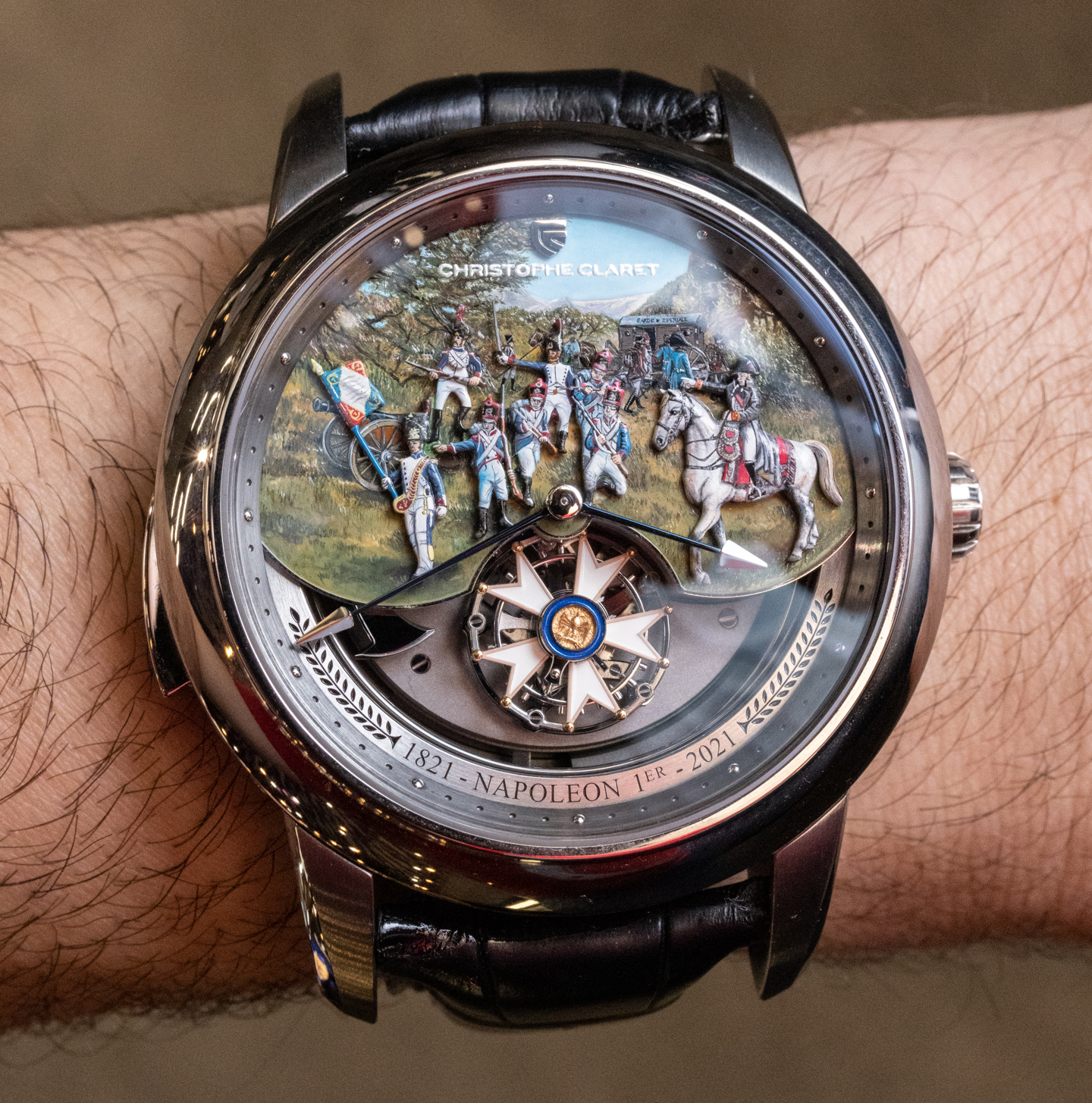 Turn the watch case over, and you have a lovely view of the highly complicated movement, which, again, has an “N” for Napoleon on one of the visible bridges. Note that the 18k red gold version has this same bridge in a matching red-gold tone, while the titanium version has an entirely monochromatic movement color-scheme. Mechanically, this is some of what Christophe Claret does best, and because Napoleon is a hero of sorts to him, there is a lot of time and pride put into this interesting collection of limited-edition ultra-luxury timepieces. Price for the Christophe Claret Napoleon watches in titanium is 590,000 Swiss Francs, and the 18k red gold versions are priced at 620,000 Swiss Francs. Learn more at the Christophe Claret watches website.