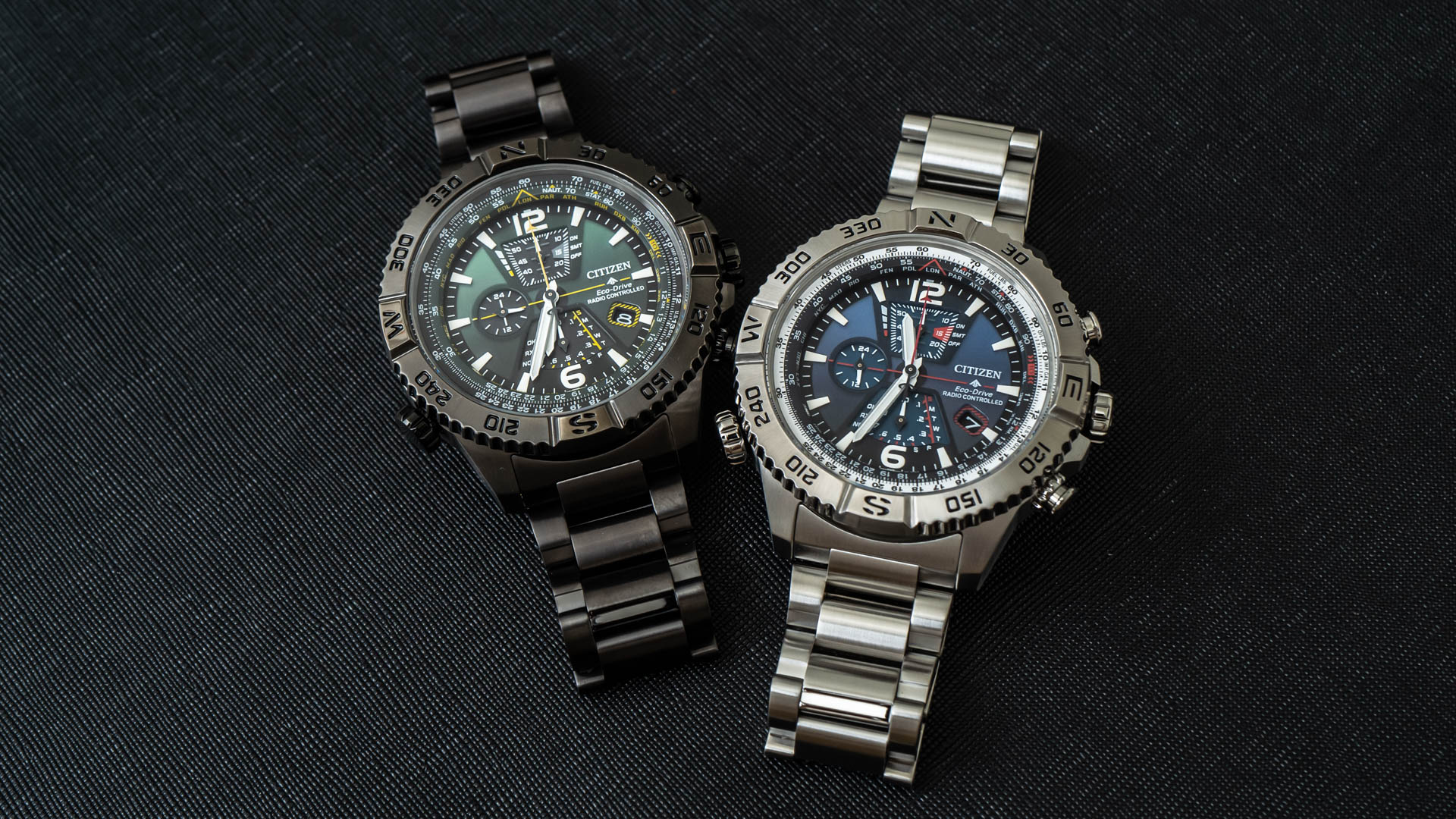 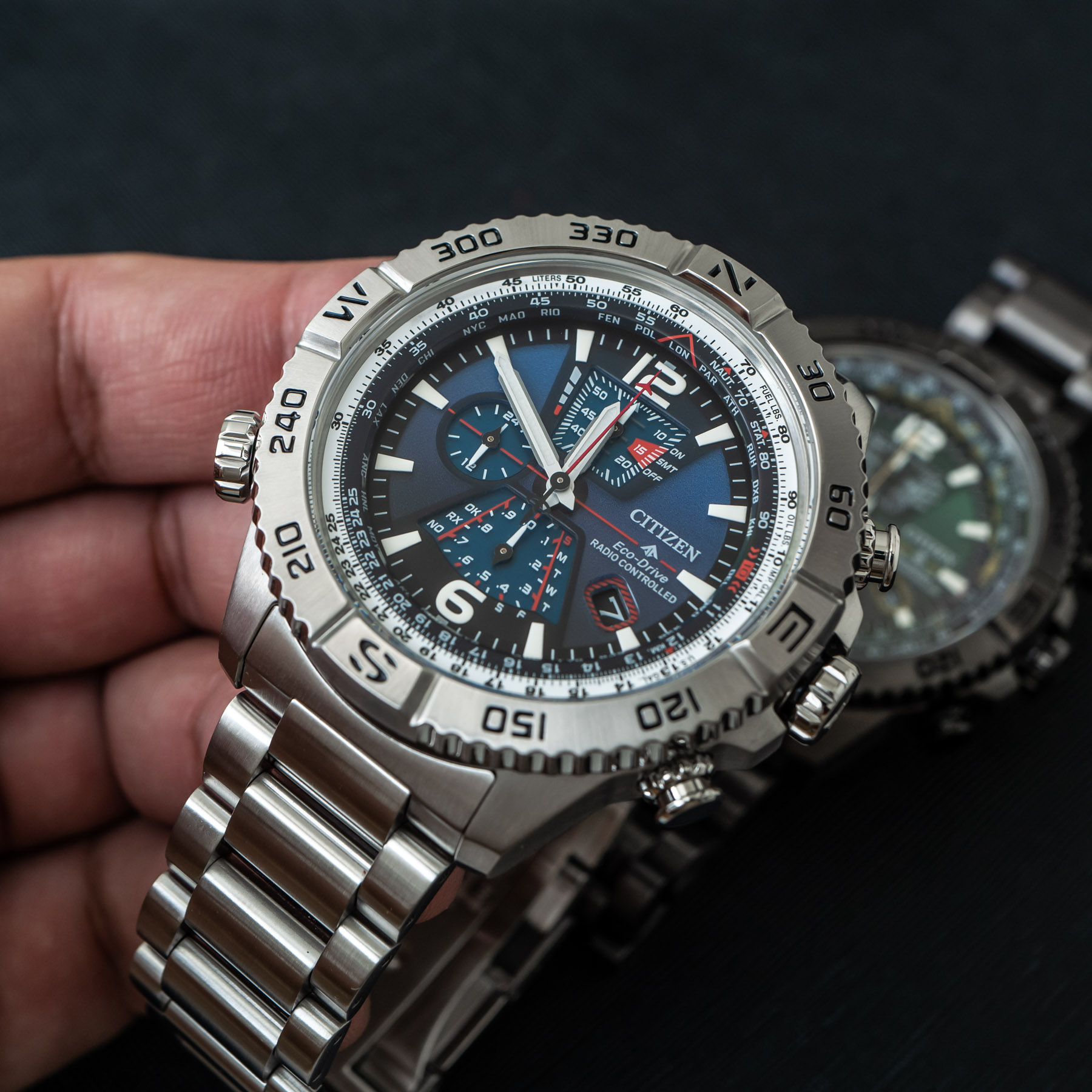 Amid its varied and ultra-capable Promaster series, Citizen produces some of the most durable and purpose-built pilot’s watches on the current market. With their tendency towards bold case sizing, quartz complications, and visual hyper-complexity, these Citizen Promaster Air designs stand as formidable competitors to the higher echelons of the ubiquitous Casio G-Shock line. Until recently, however, the brand’s tough and capable contender series was missing one of its most potent tools. With the return of the Promaster Navihawk, however, Citizen brings an aggressive fighter cockpit-inspired look and immense functionality to the series in a pair of high-impact colorways. The new Citizen Promaster Navihawk series delivers an impressive blend of ruggedness and capability, creating one of the most capable and function-driven quartz tool watch designs on the current market. 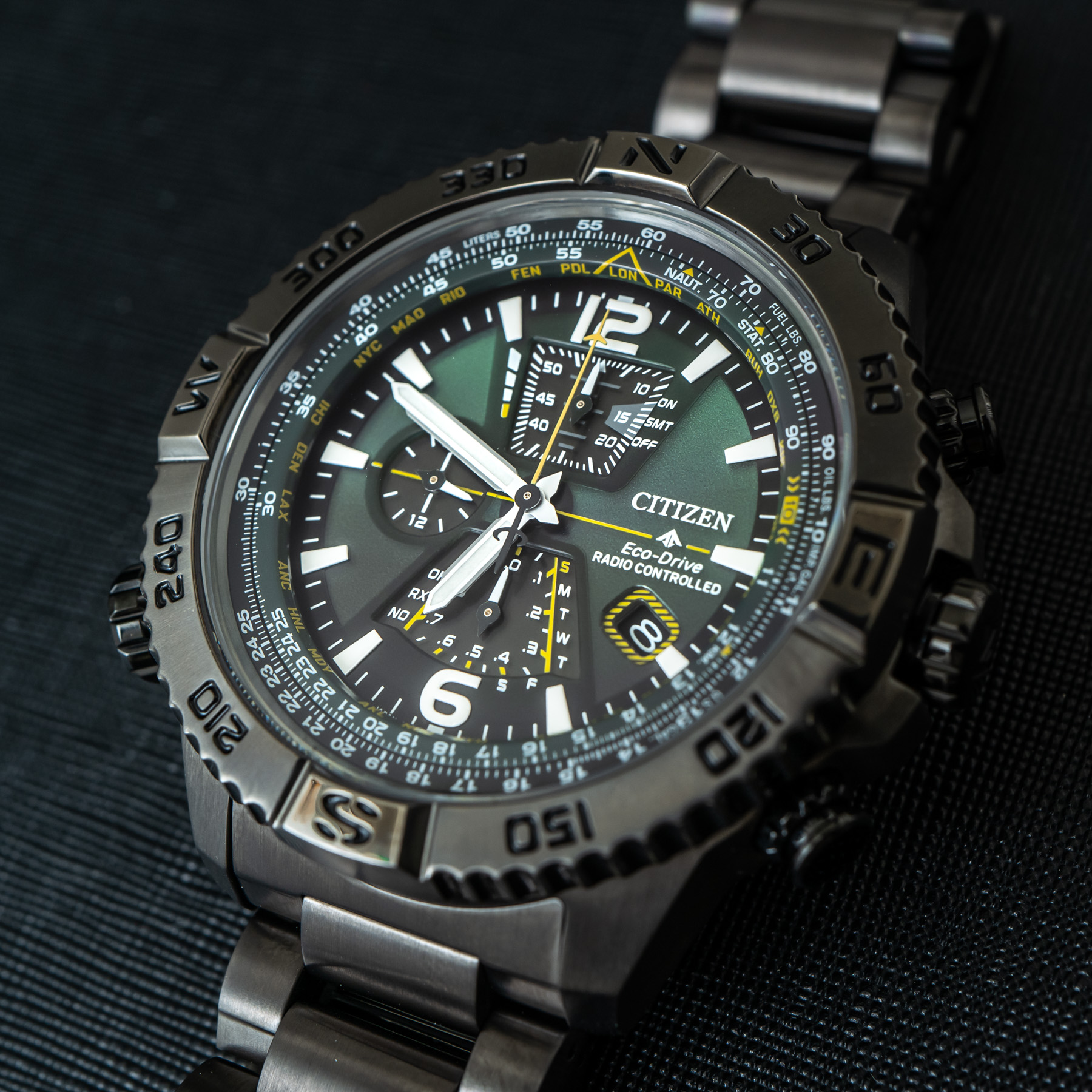 There’s no denying the Citizen Promaster Navihawk is a big watch. At 48mm-wide, this broad, athletic design shares some of its rivals’ imposing wrist presence, but unlike many of its competitors, the overall form is deceptively simple. While there are intricate elements such as the engraved free-turning compass bezel and the screw-down mushroom pushers, by and large, the shape of the Promaster Navihawk is remarkably conventional, with shortish tapering lugs and vertical slab case sides. The fully brushed stainless steel finish keeps this complex design from feeling overwhelmed by detail, and the optional black ion-plated coating further aids the sense of purposefulness in the overall design. With this more standardized form, however, the case of the Promaster Navihawk does little to hide its bulk, and although overhang is largely mitigated by the short lug length this is certainly a watch that makes itself known on the wrist. Citizen does place a major focus on durability for the Promaster Navihawk, as evidenced by the solid 200-meter water resistance rating. 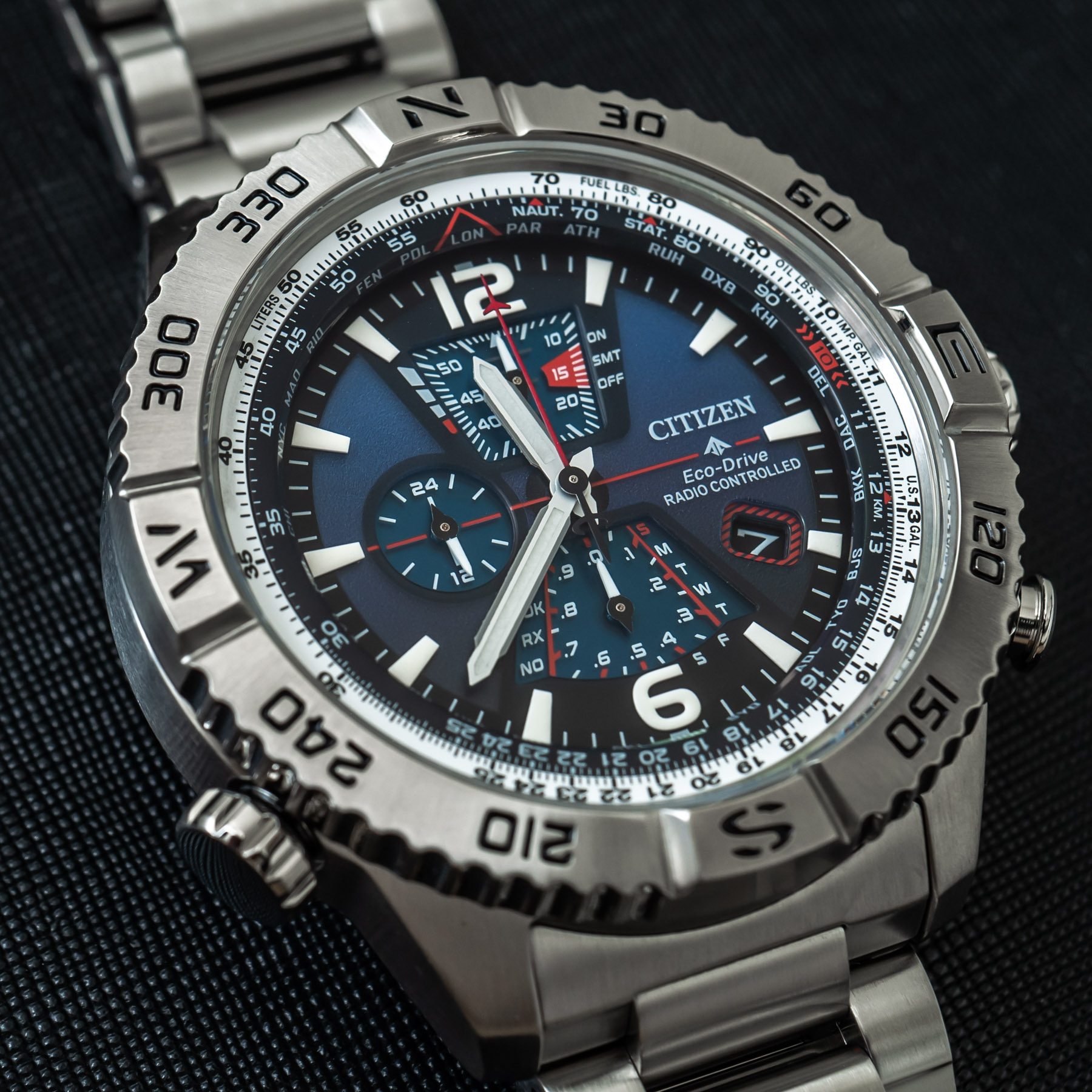 Citizen packs an impressive amount of functionality into the dials of the Promaster Navihawk series. Rather than the clean legibility of flieger-style pilot watch designs, the brand clearly aims for the more technical side of the pilot chronograph spectrum, and nearly every corner of real estate under the sapphire crystal is devoted to useful data. This begins right at the edge of the dial, where Citizen includes a rotating inner bezel with a fuel consumption scale, allowing wearers to track fuel usage per mile during a flight. This dedication to hardcore technical info continues throughout the rest of the design, especially with the multifunction layout of the 12 o’clock and 6 o’clock subdials. Citizen models the dial after the look of modern aircraft cockpits, and these graphic trapezoidal subdials capture the look of a modern fighter jet’s heads-up display effectively on the wrist. 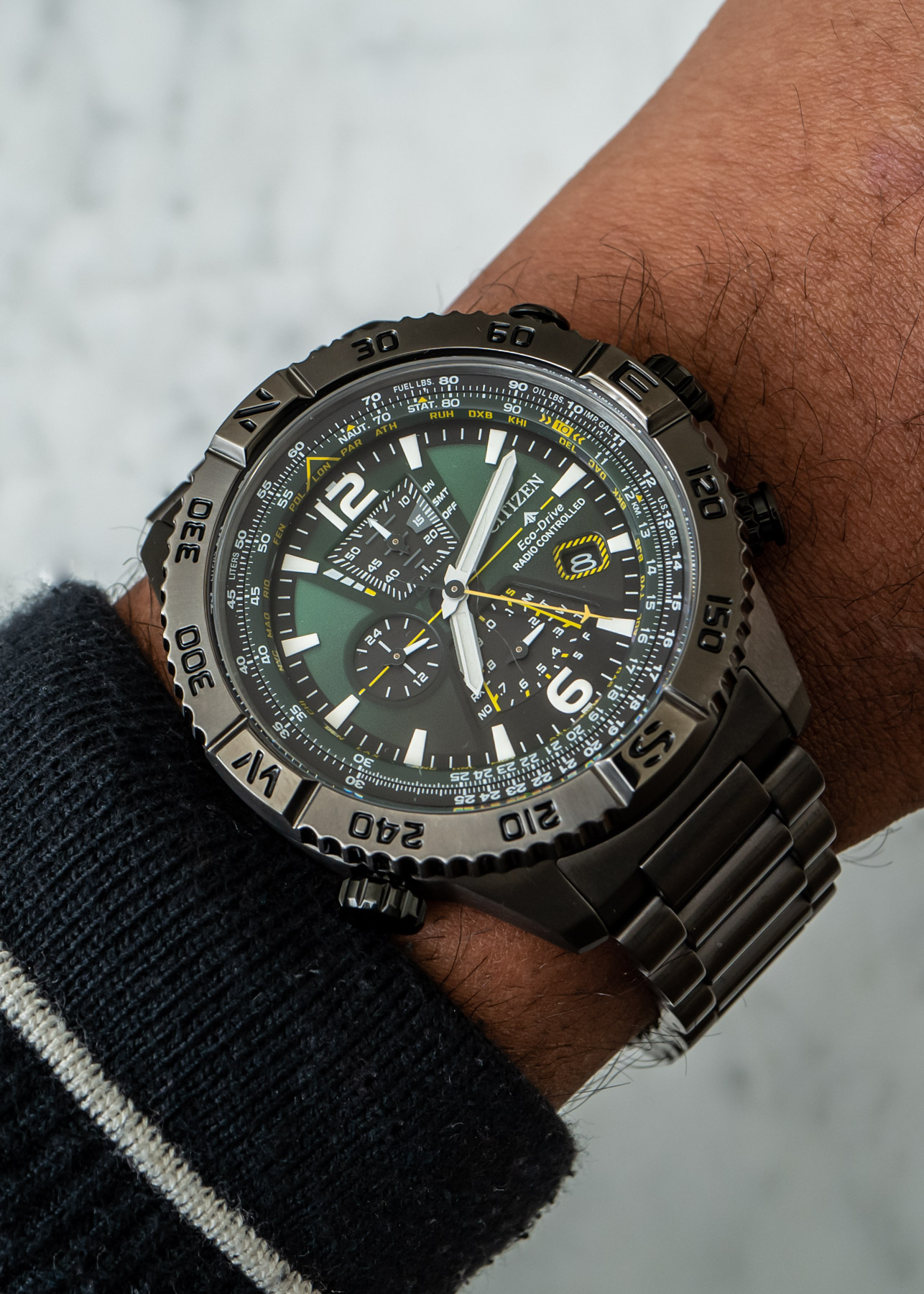 Both subdials pull triple duty depending on the current complication in use, with the 12 o’clock subdial cycling between a chronograph minutes display, a power reserve indicator, and a daylight savings time indicator at the press of a pusher. Likewise, the 6 o’clock subdial can transfer between a chronograph 1/20-second display, pointer day complication, and a radio control signal indicator. Outside of the relatively simple 9 o’clock 24 hour subdial, the rest of the Promaster Navihawk’s dial design keeps the technical aviation theme intact, with a mix of bold printed wedge indices and rounded Arabic numerals paired to a flanged straight sword handset. The central chronograph seconds hand adds a winged tip to reinforce the aeronautical cues and other elements from the bright contrasting “horizon line” running from 9 o’clock to 3 o’clock to the hazard-striped frame to the 4 o’clock date window help to complete the look. One of the Promaster Navihawk’s most advanced complications is also one of its visually subtlest, however, as the only outward indicator of its world timer capability is the city ring on the vertical slope of the inner bezel. Both dial variants also inject their own character into this formula. The stainless steel cased model brings a bright and sporting red and black colorway to the gradient base dial, which sharply transitions from strong cobalt at 12 o’clock to a deep black at 6 o’clock. By contrast, the black and yellow accents of the black ion-plated model give the design far more of a modern military character on the wrist, which is further reinforced by the main dial’s gradient from forest green to black. 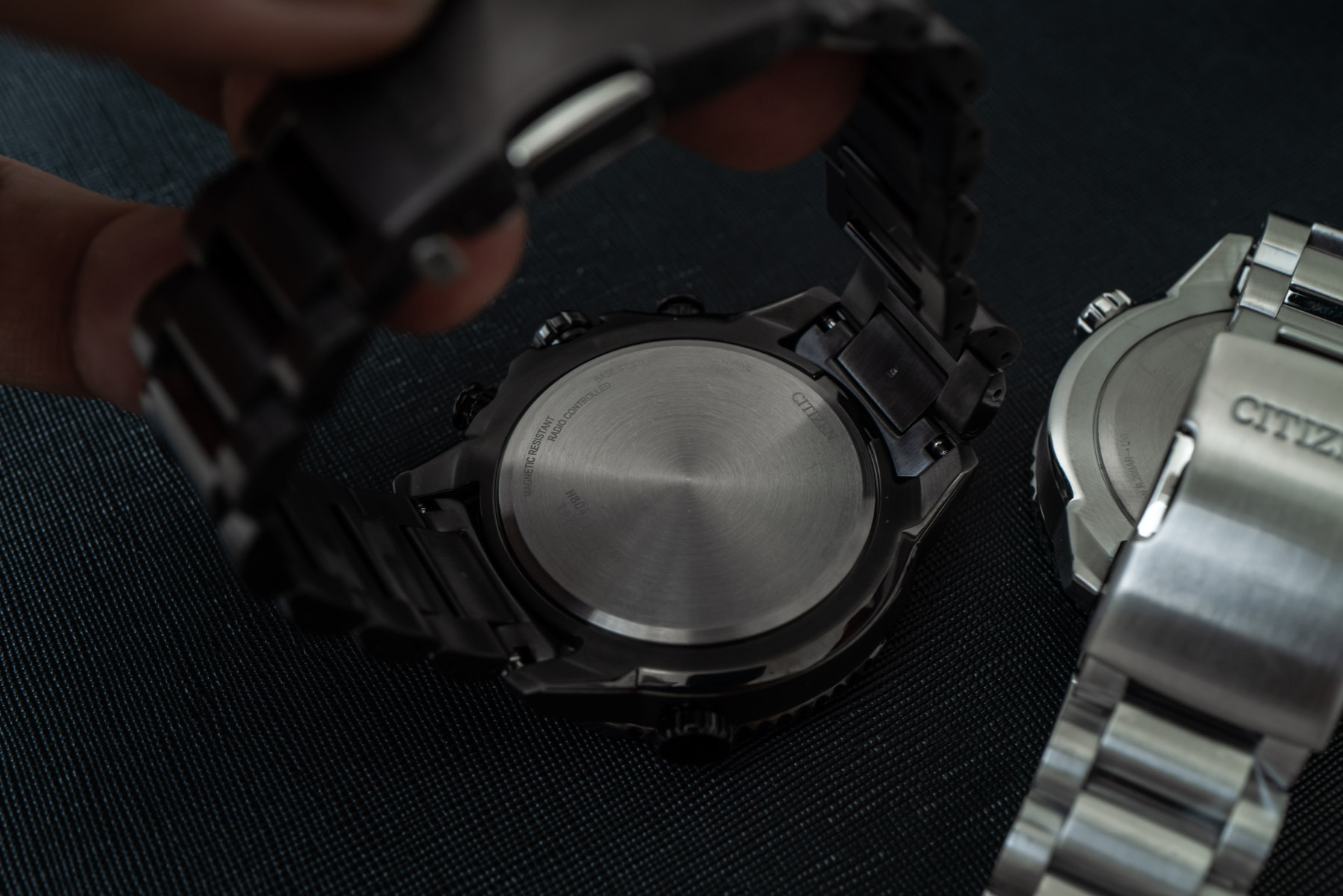 Citizen powers the Promaster Navihawk with its in-house H804 radio-controlled quartz chronograph movement. The H804 offers a wealth of complications, ranging from a 1/20-second chronograph to a perpetual calendar, Eco-Drive solar charging, a 24-hour subdial, a day/date display, a power reserve indicator, a world timer, and radio-controlled timekeeping synchronized to an atomic clock that automatically adjusts to the wearer’s current time zone. After a full solar charge, Citizen claims the H804 can run for a solid 10 months without recharging. Citizen completes both models with a three-link bracelet. The smoothly brushed finishing and rounded links of these bracelets go a long way towards giving the Promaster Navihawk a more refined charm, and the two-button clasps are both handsomely finished and help to make the watch a comfortable wear despite its heft. 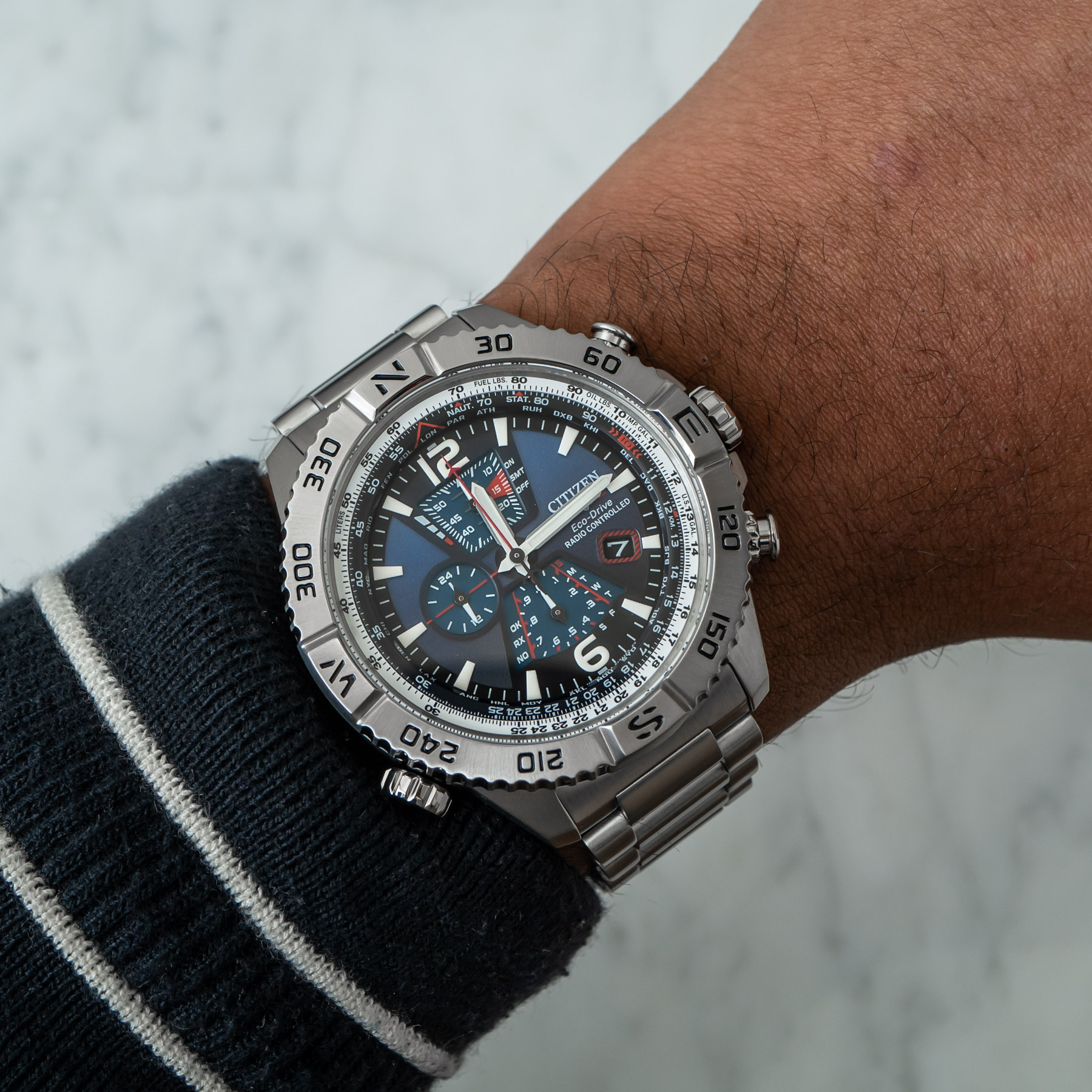 With a deep roster of complications, rock-solid construction, and a complex-yet-functional design, the new Citizen Promaster Navihawk series stands as a true contender in the ultra-capable quartz sports watch space. Both variants of the Citizen Promaster Navihawk are available now through authorized dealers, at an MSRP of $650 for the stainless steel model and $695 for the black ion-plated variant. For more details, please visit the brand’s website.