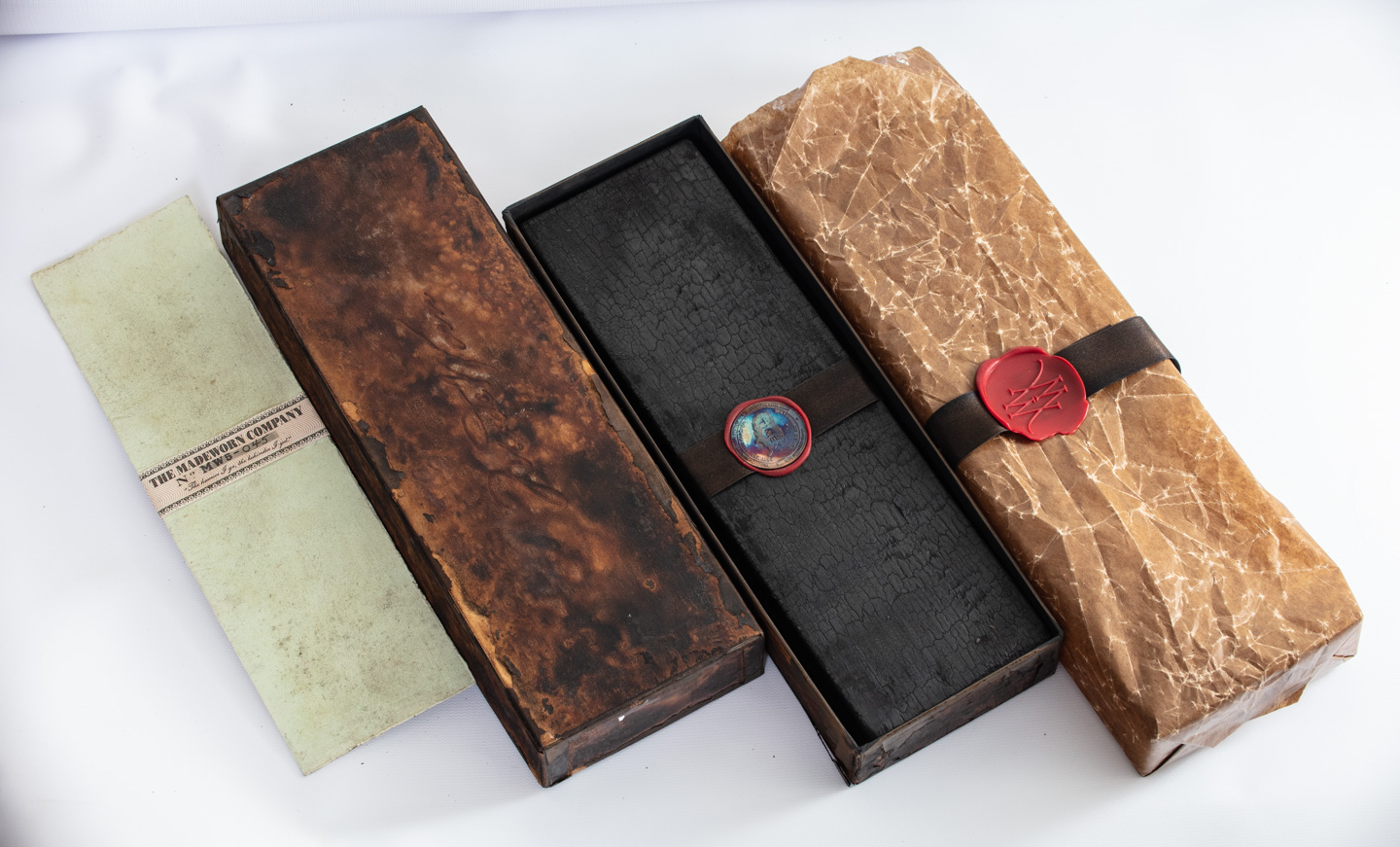 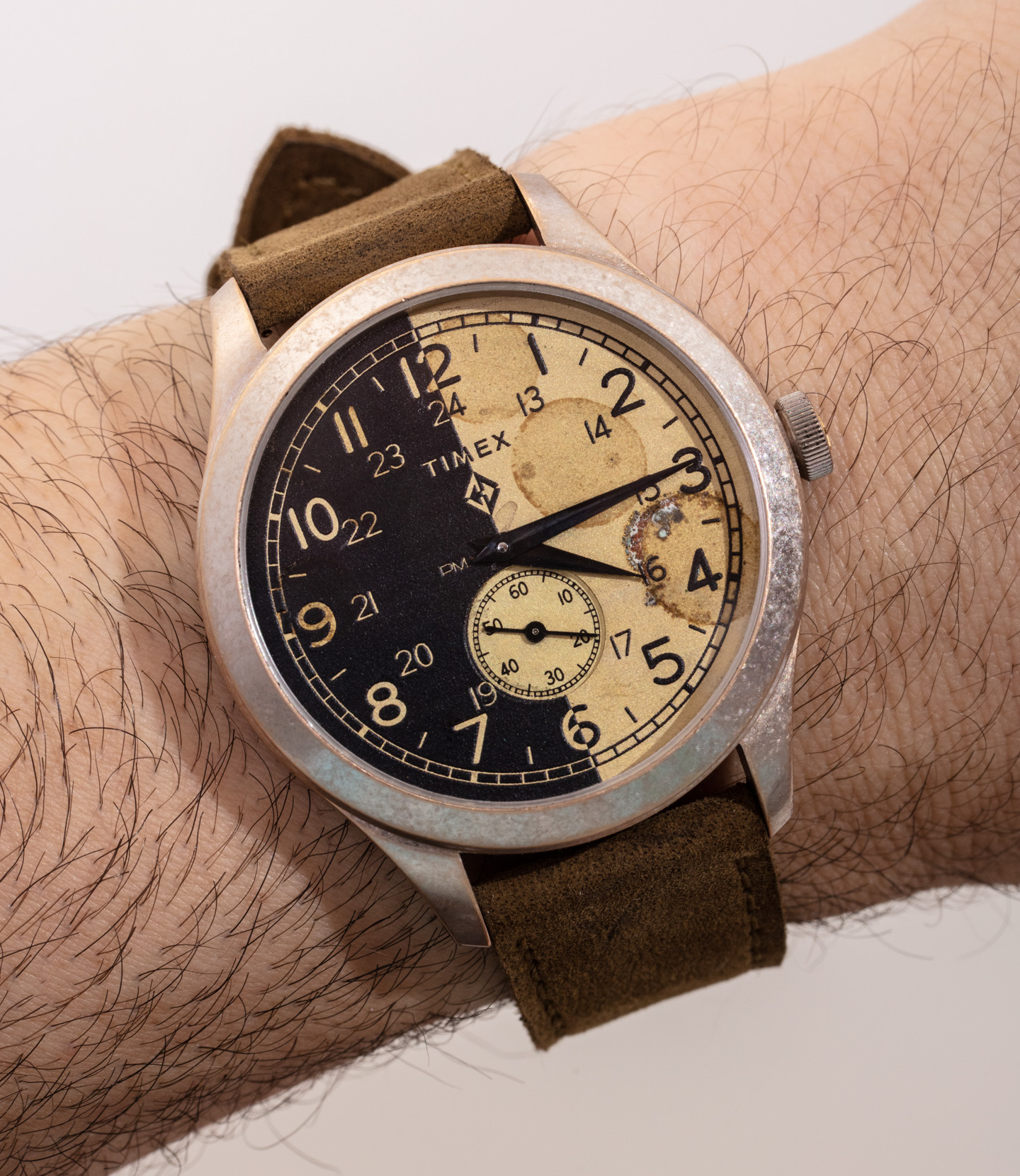 Today, Timex launches a new limited-edition version of its Made in America, American Documents watch, produced in collaboration with California-based MadeWorn. If you recall, American Documents is a special collection of watches from Timex originally launched in 2019 that have cases, dials, hands, crystals, and straps that are all manufactured in the United States. The watches use a Swiss quartz movement, and aBlogtoWatch went hands-on with the original Timex American Documents collection here.

As far as I know, the Timex x MadeWorn watches are the first serious limited-edition variant of the American Documents pieces. It was the perfect collection for MadeWorn founder Blaine Halvorson to base a limited edition around, given his deep interest in Americana and Made in America items. MadeWorn shot to fame in the watch space for taking Rolex and some other luxury watches (as well as an Apple Watch) and beautifully hand-engraving them to great effect. Halvorson’s creative work set off a mini-trend in the luxury watch space. A few years ago, I helped Timex connect with MadeWorn and set up an initial meeting between the parties here in Los Angeles. It is very satisfying to see the compelling results of MadeWorn’s proprietary aging processes translated into a limited-edition Timex wristwatch. 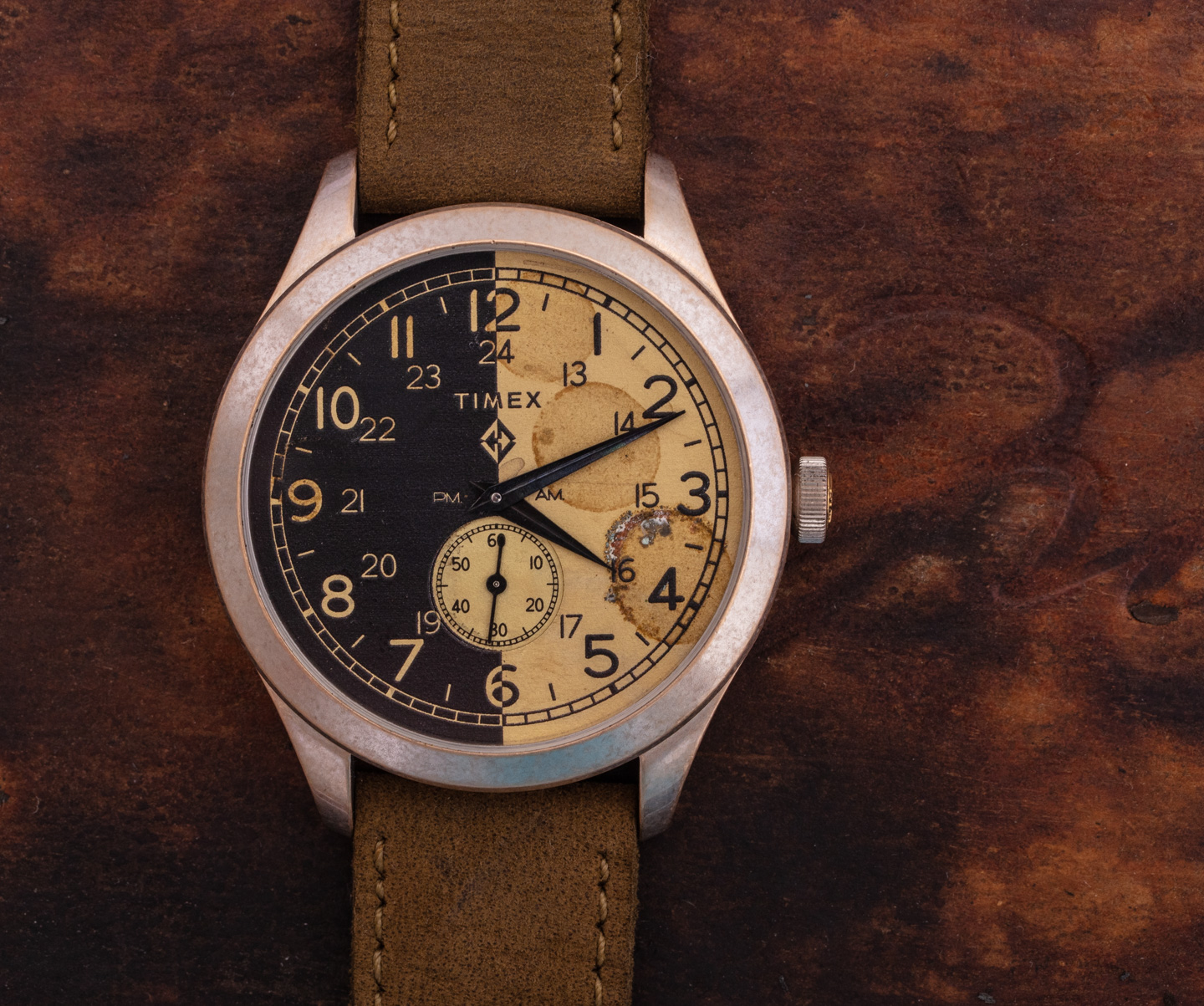 MadeWorn, as a brand, is noteworthy for a few reasons. In addition to producing a number of officially licensed clothing articles for major names in music, MadeWorn is probably the world’s most accomplished producer of new products that are designed to have the appeal of “found vintage treasure” — whether that is a shirt that looks as though it was originally purchased at a concert in the 1970s or a timepiece.

While not his first wristwatch project, the Timex x MadeWorn American Documents collection was Blaine Halvorson’s first opportunity to create a unique dial. He took inspiration from old American pocket watches that included two-tone dials, which were designed to represent AM/PM indicators. For Halvorson, the two-tone black and tan-colored dials represent both the duality of existence (this is a gentleman with “love” tattooed on one set of knuckles and “hate” on the other), and he finds the two faces of the aesthetic contrast appealing. Inspiration was taken from a series of designs, including vintage military and other professional-use watches from the 20th century. 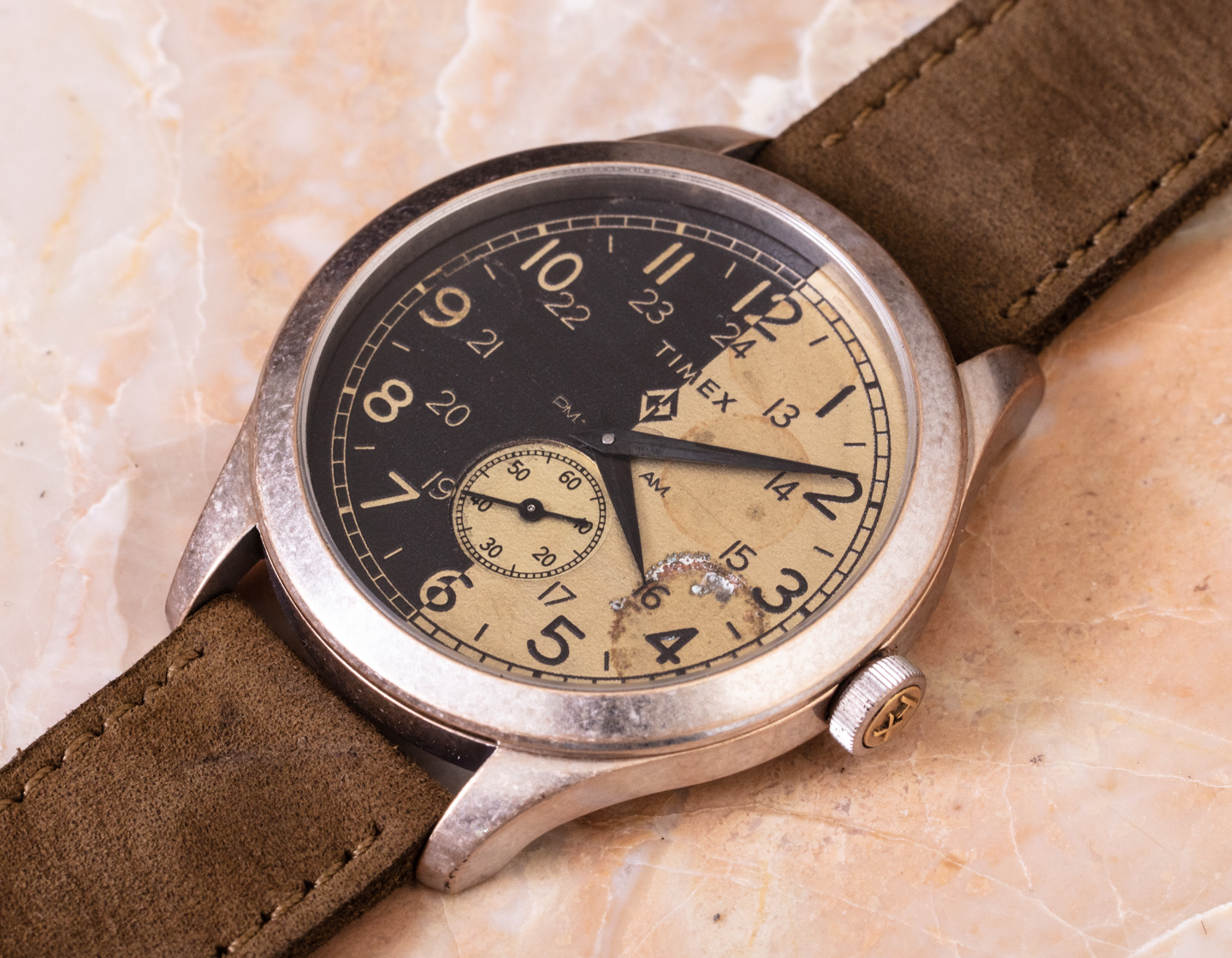 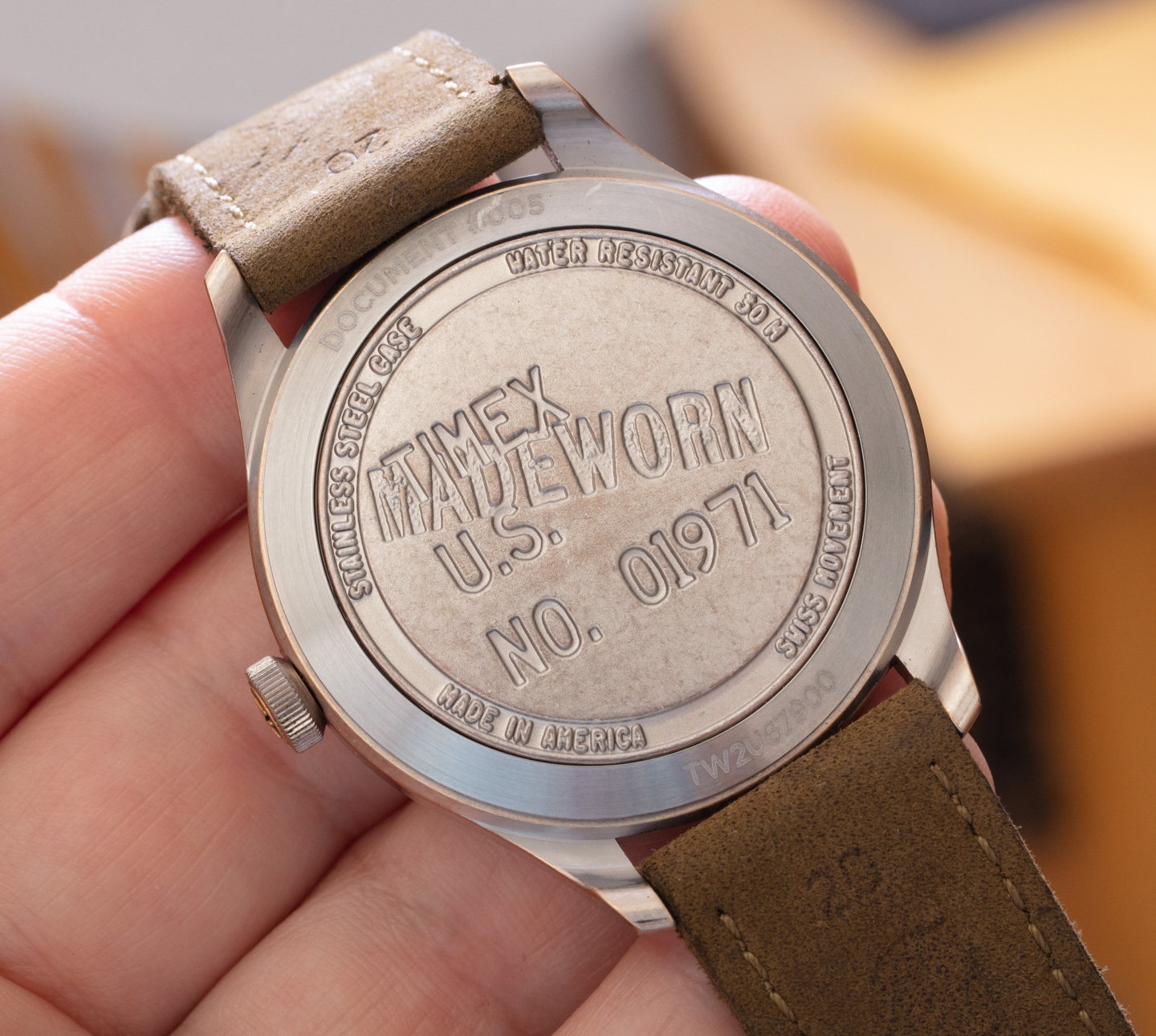 MadeWorn products are not just about a design, but also about receiving an artistic aging process. This is where a lot of the value comes in and why these Timex x MadeWorn watches are about double the price of the standard American Documents products. Once you understand how much hand-effort went into each watch (and their incredible presentation box), the value proposition becomes clear. Aside from the novel dial, what is special about the MadeWorn version of the American Documents watches is the caseback, as well as the strap. The caseback, especially, is meant to enhance the sensation of the watch being “found treasure,” looking like a discovered Timex military watch with a MadeWorn stamp over it.

The leather strap (also made in America) is given a special aging process and comes out with an elegant brown tone that matches the world of MadeWorn quite elegantly. Where most of your attention will go, however, is the 41mm-wide steel case. It was given a coating and then specially worn through a tumbling process to give the appearance of aged brass. Timex and MadeWorn invented some brand-new processes to age the various watch components, which allow each of the limited-edition pieces to have their entirely own unique look and feel. Accordingly, no two Timex x MadeWorn watch dials are the same. Halvorson wanted the watches to look as though they had been used in the sun while the wearer spent years working and wearing them in. 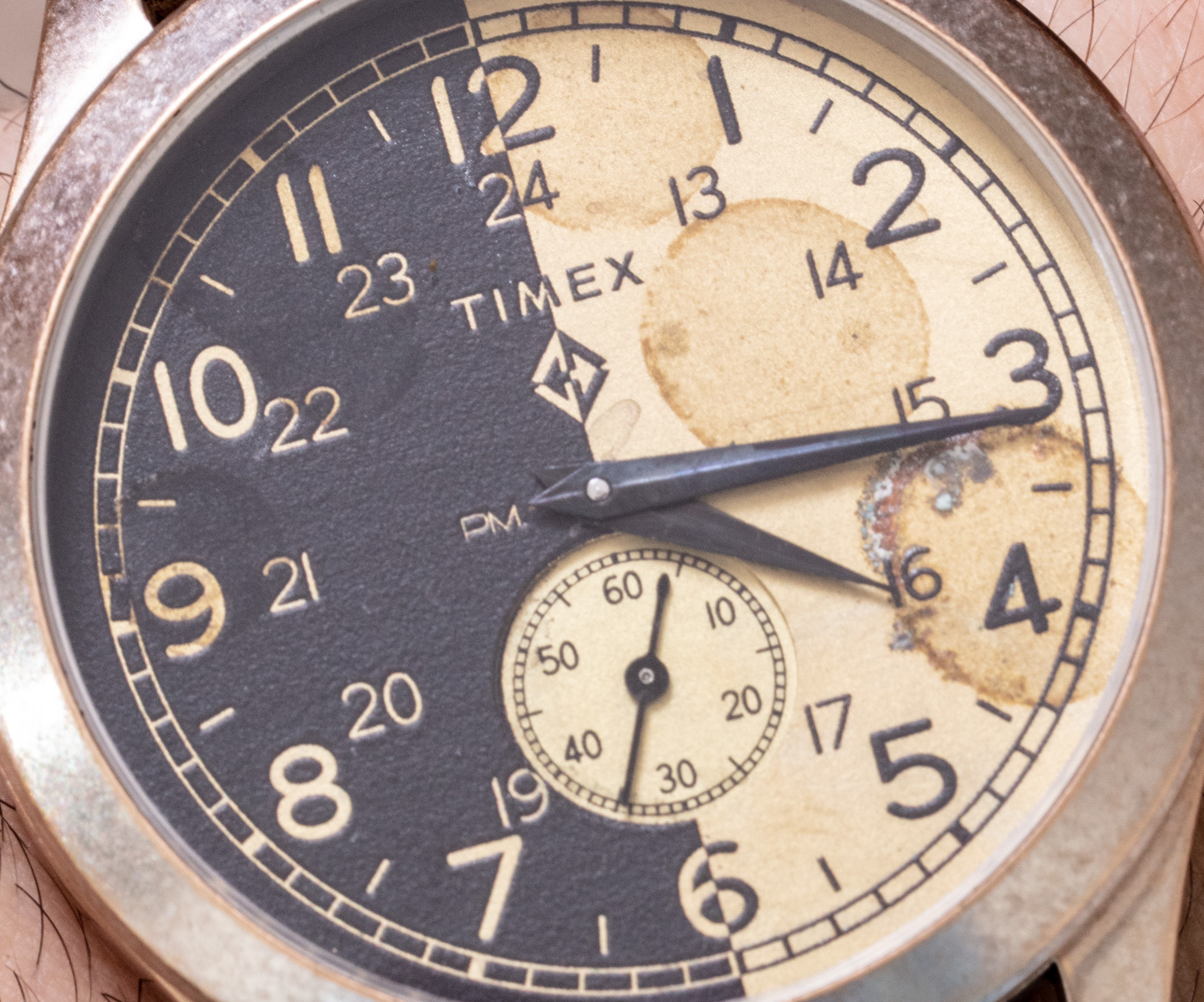 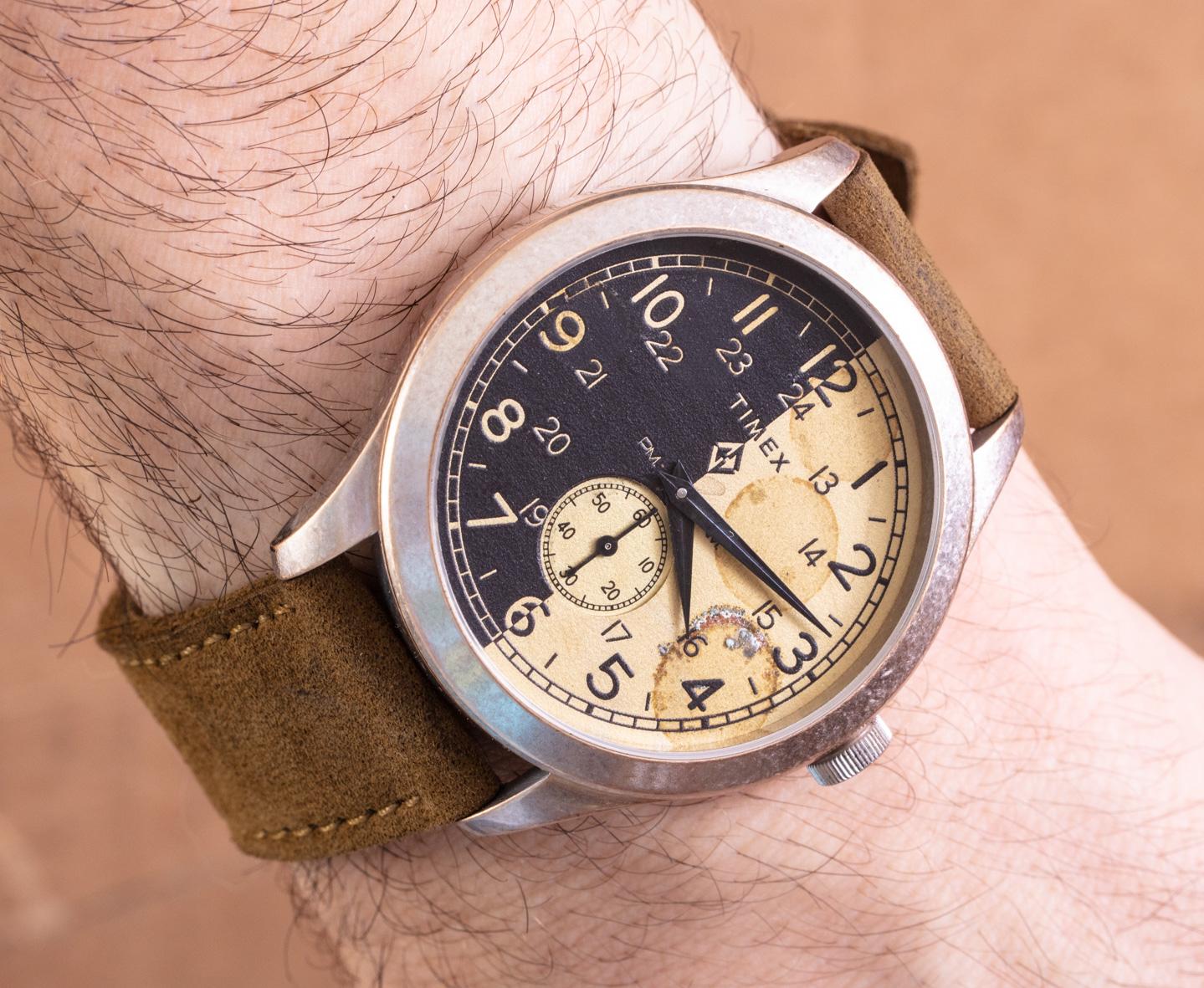 The resulting watch is dripping with MadeWorn DNA and Blaine Halvorson’s personal style. It is polarizing, yes, but so are pretty much all of the world’s “pre-worn” products, be they clothing or timepieces. The “lived-in” look, even for luxury items, is still very popular, and Halvorson’s MadeWorn is an absolute master of its craft. The richness of details and artisanship make for a deep product experience that offers an imagined life for the products, which, in some instances is more interesting than an actual vintage product’s life. MadeWorn is all about nuanced details and techniques, ultimately translating into organic-looking tools and items that offer the kind of character rarely found in new, industrially produced clothing and goods.

The final icing on the Timex x MadeWorn American Documents watches cake is the presentation box. This is where you see the best of MadeWorn and where so much of the product charm is. The presentation box starts with a sealed wax paper outer layer and continues into a wax-sealed hand-burned presentation box. The level of detail and art direction in the packaging, alone, demonstrate the level of love and emotion that went into this product. Fashionable, artistic, and polarizing, the Timex x MadeWorn American Documents watches are among the most interesting conversation pieces this year and will be initially sold exclusively through the Timex.com website. Price for the limited edition reference TW2U67900 Timex x MadeWorn American Documents watches is $850 USD. Learn more or order at the Timex website here.