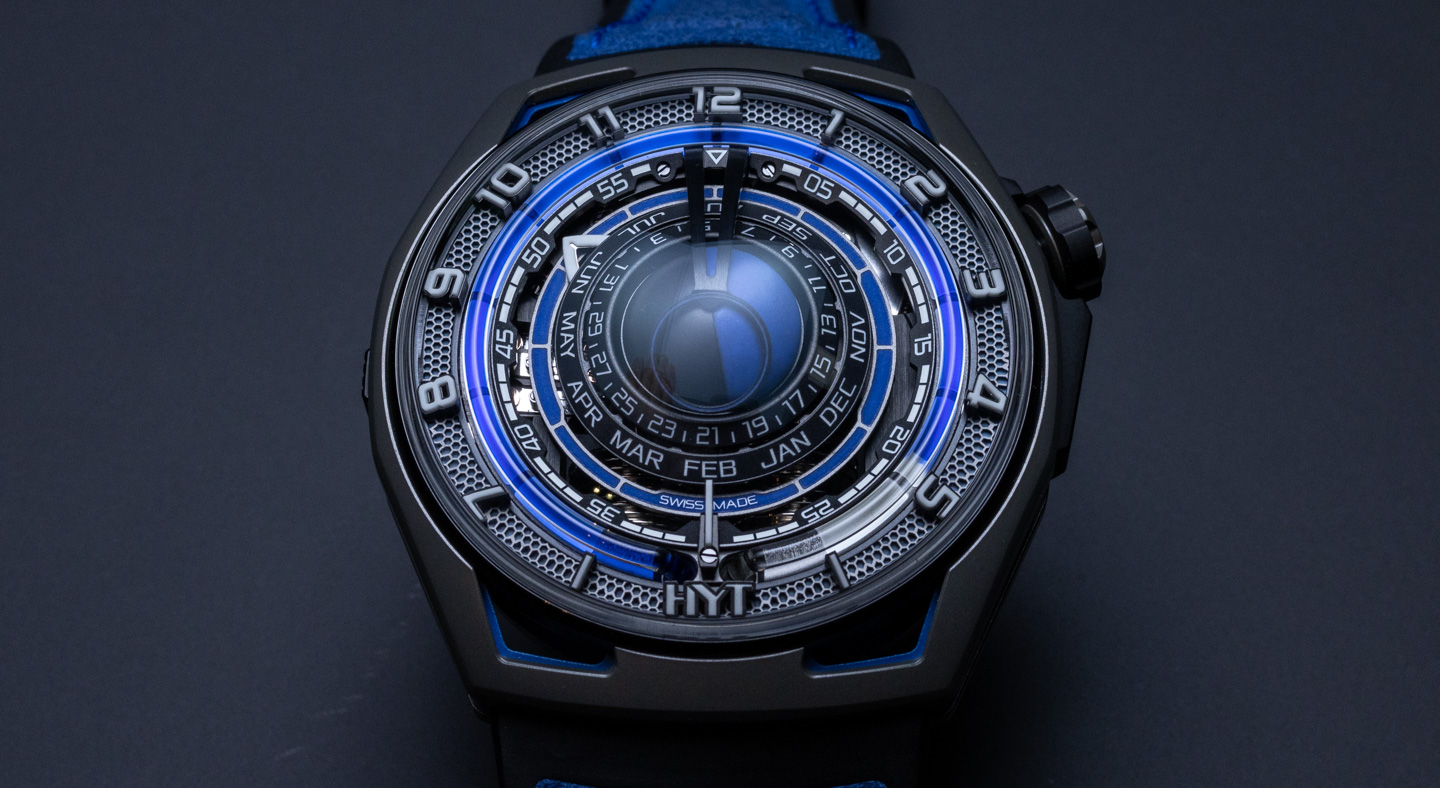 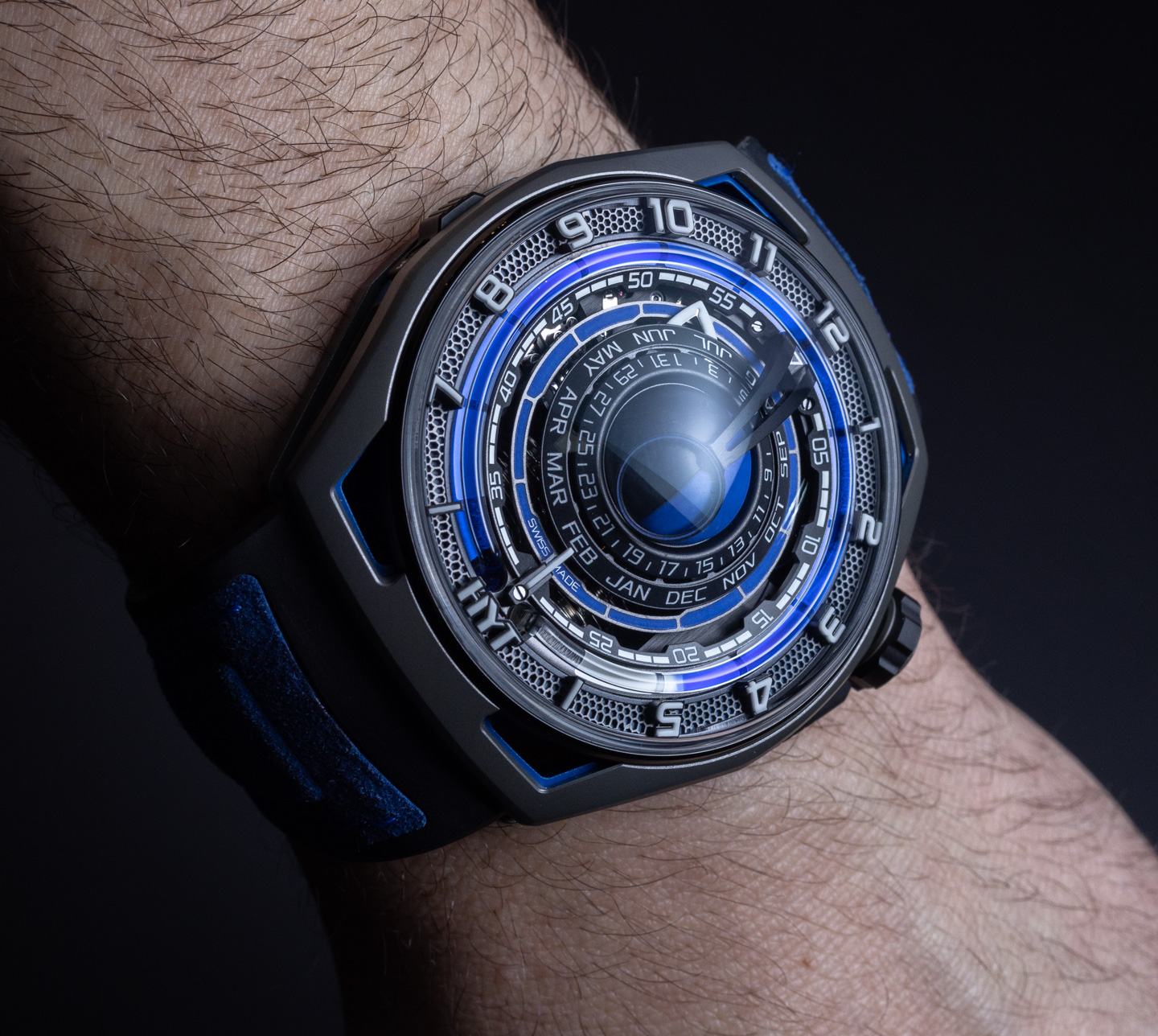 The return of Swiss HYT was marked by the release of the HYT Hastroid Green Nebula watch (announced on aBlogtoWatch here), but this subsequently released HYT Moonrunner is really where you’ll see the type of innovation that HYT is probably going to be known for moving forward. The Moonrunner Supernova Blue (dramatic name, I know) takes the same case architecture and base movement as the Hastroid but introduces a new dial display with moon phase and annual calendar. aBlogtoWatch will go hands-on with the Hastroid soon, but for now, let’s get a look at the new 2022 HYT Moonrunner Supernova Blue.

HYT poetically calls the Moonrunner watch “a 3D moon window to space.” The celestial theme is a new hallmark of the brand, moving it away from the more traditional “futuristic watchmaking meets hydrologists” of the previous generation HYT company. The entirety of the Moonrunner dial is very impressive in both how the information is displayed and the deep three-dimensional design that makes good use of the space under the highly curved sapphire crystal dome over the face. 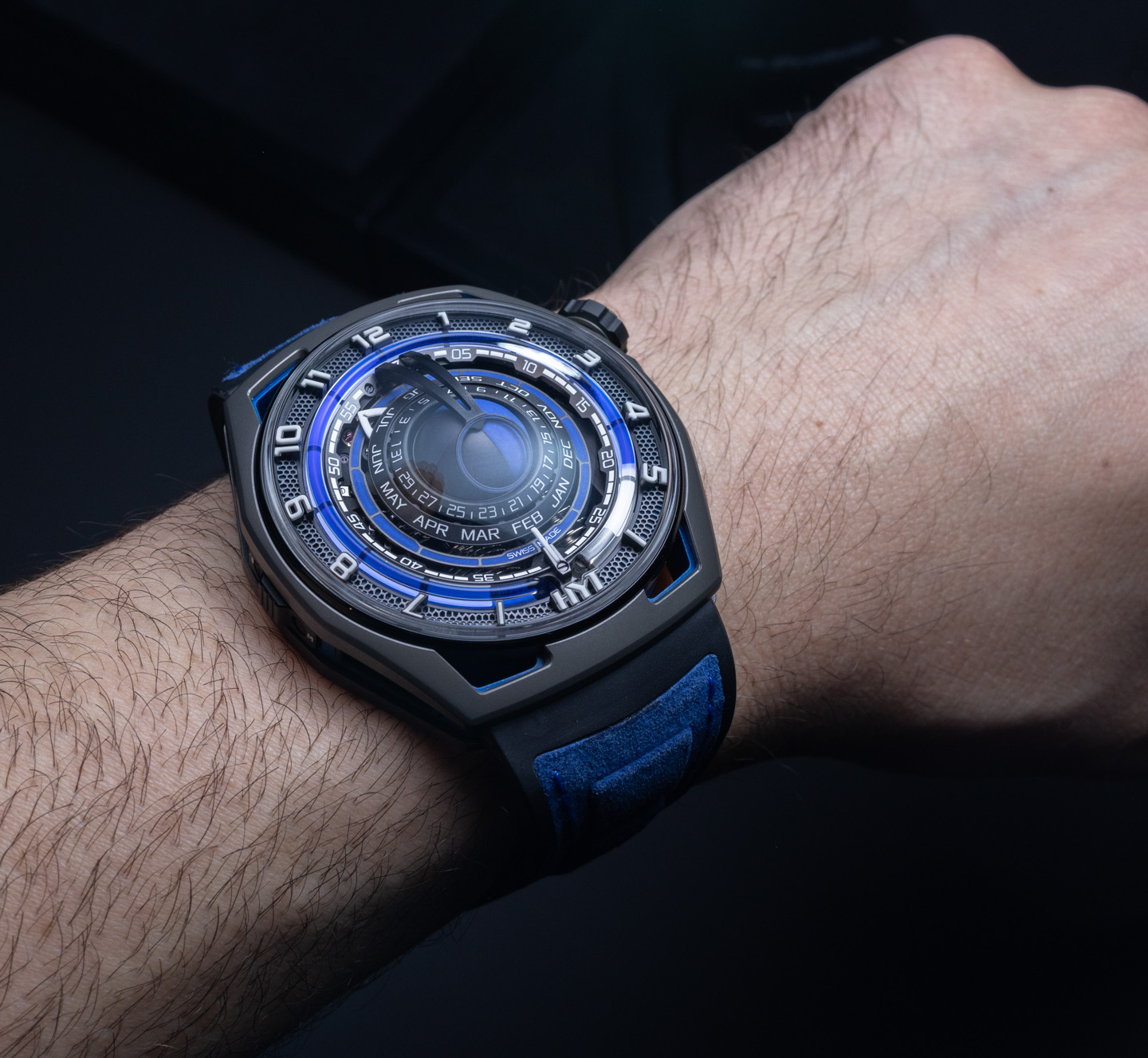 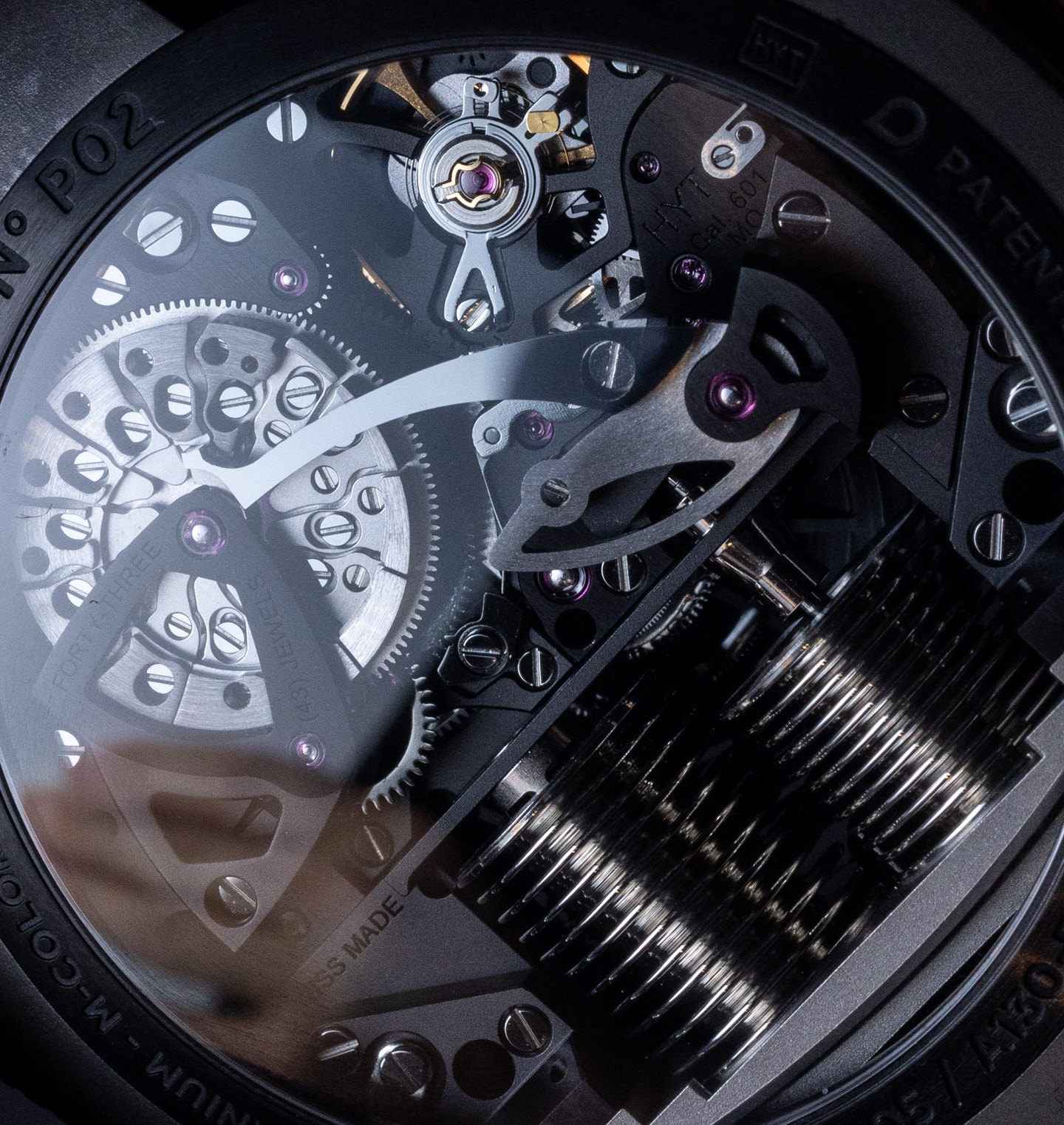 Moving outside in, the periphery of the Moonrunner Supernova Blue dial begins with HYT’s signature retrograde liquid display for the hours, which uses blue-colored liquid set against a lume-painted background. Moving inside is a more traditional minutes hand that is presented as a white arrow hand that moves under the moving calendar rings. Accordingly, as you move more to the center of the dial, you see first a month indicator ring and second a date indicator ring. Both are read via the hand positioned at the 6 o’clock on the dial. The very center of the Moonrunner dial is a three-dimensional blue and black sphere moving under a circular window that represents the moon phase indicator.

Most of the dial is crafted in matte surfaces and a lot of anodized aluminum. Indeed, there is a degree of glare from the crystal, but the mostly non-reflective display of the HYT Moonrunner is a real benefit to its overall design and makes it feel more like a futuristic instrument and less like another luxury wearable that tries too hard to attract attention via shiny surfaces. Viewers tend to like the look of concentric rings, and the Moonrunner’s display does this, perfecting not only using rings within rings to create the dial, but also creating a pyramid effect with a high level of depth. This is a dial that your eyes just really like to explore and investigate. 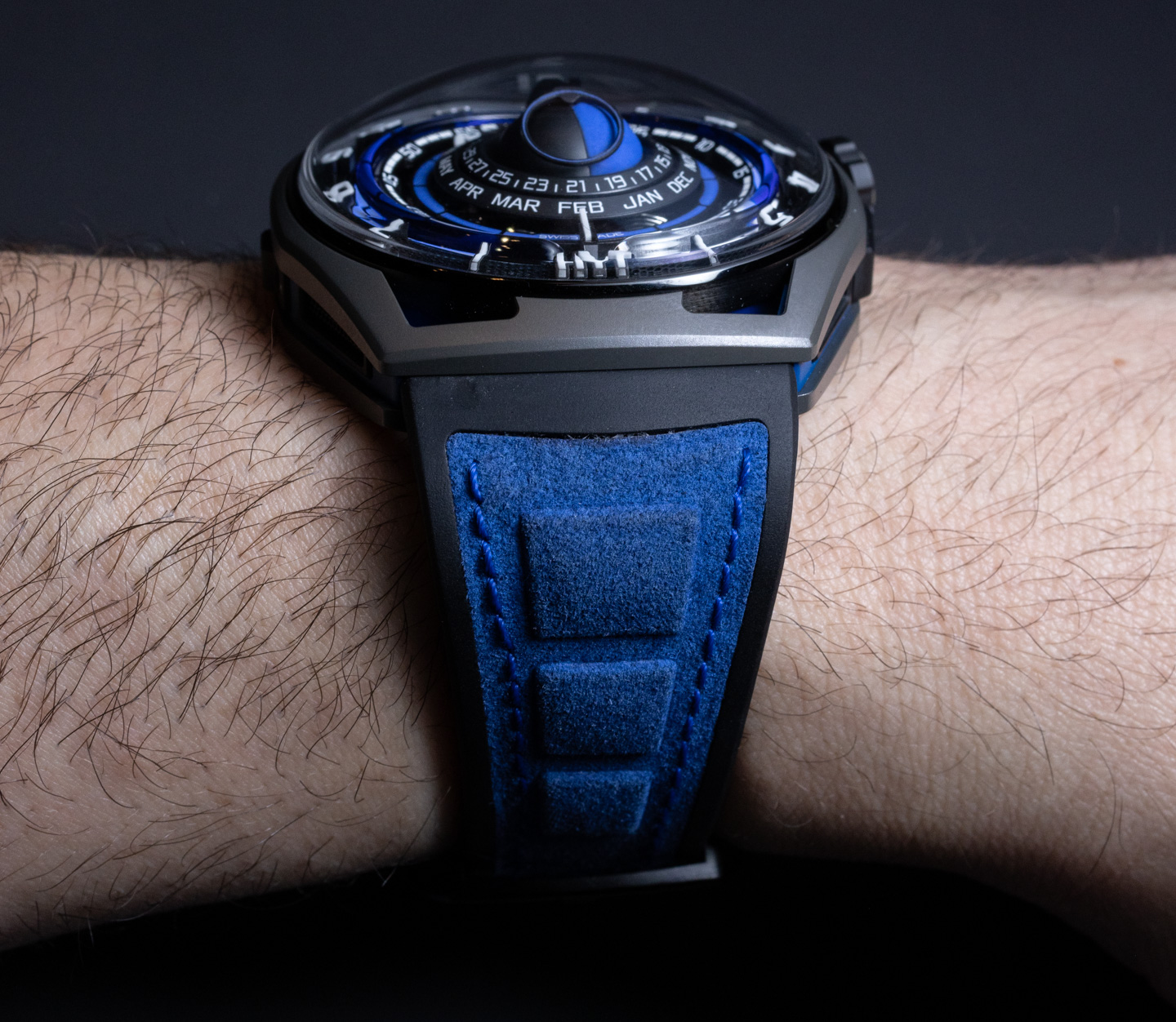 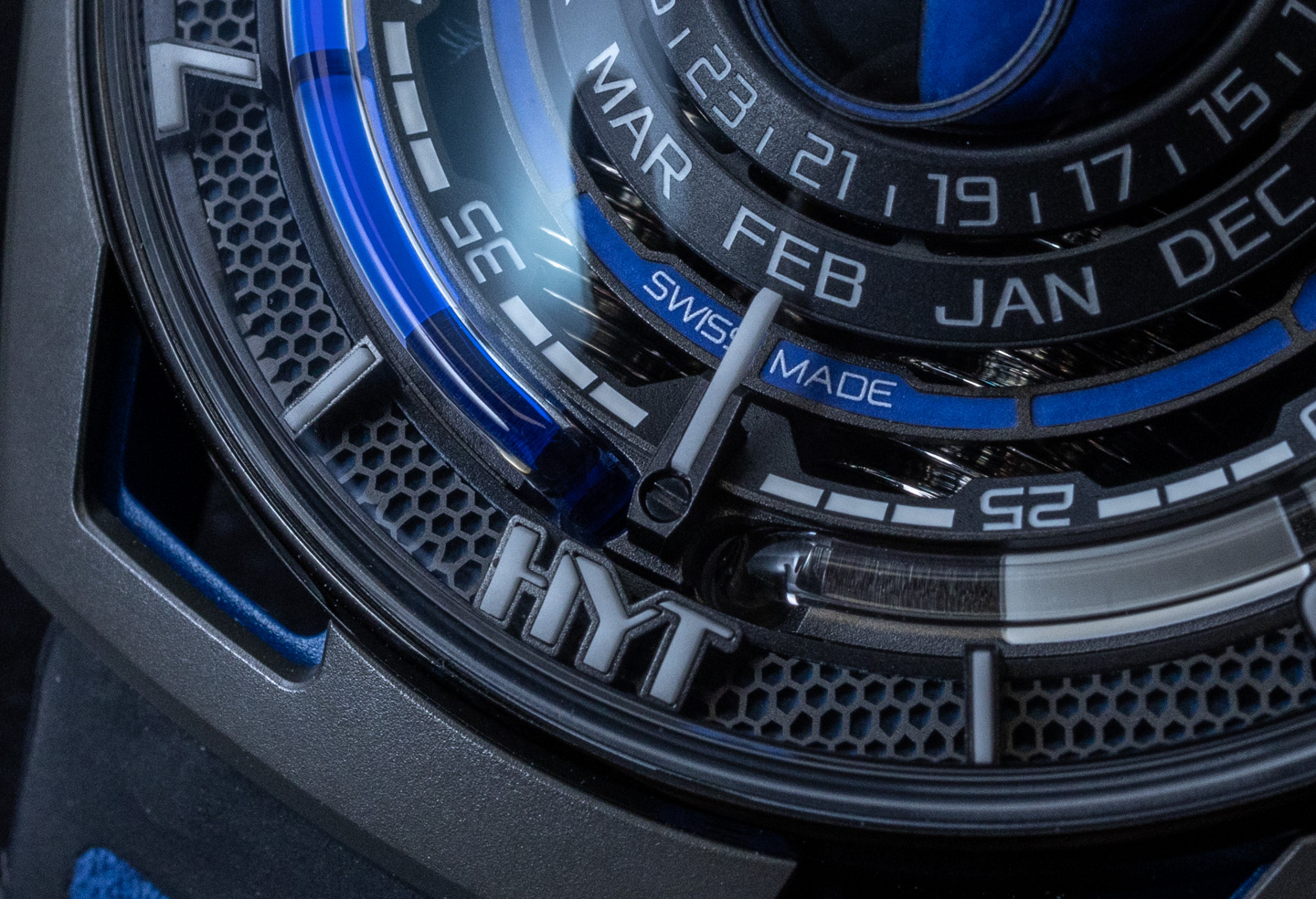 The “Supernova Blue” part of the Moonrunner’s name is probably a hint that HYT is going to plan on producing further color variations in the future, possibly with different case materials. This reference H02758-A Moonrunner has a PVD-coated black titanium case that has mostly sandblasted surfaces. You can see an inner blue structure in the case, which is produced from anodized aluminum. The case is quite comfortable despite its large size — 48mm-wide, 21.8mm-thick, with a 52.3mm lug-to-lug distance and a water resistance rating of 50 meters.

Inside the watch is an HYT movement the brand calls the caliber 601-MO. It is manually wound with 72 hours of power reserve, and it operates at 4Hz. At a glance, it might appear to be the legacy HYT movement, but it is a much-upgraded base that was developed via the old HYT team but never launched in a product. It improves upon a variety of things and certainly has some novel elements. HYT’s current management had to simply put on some finishing touches to the movement and then was able to properly industrialize it while creating the new moon display and annual calendar system module that fits over it. 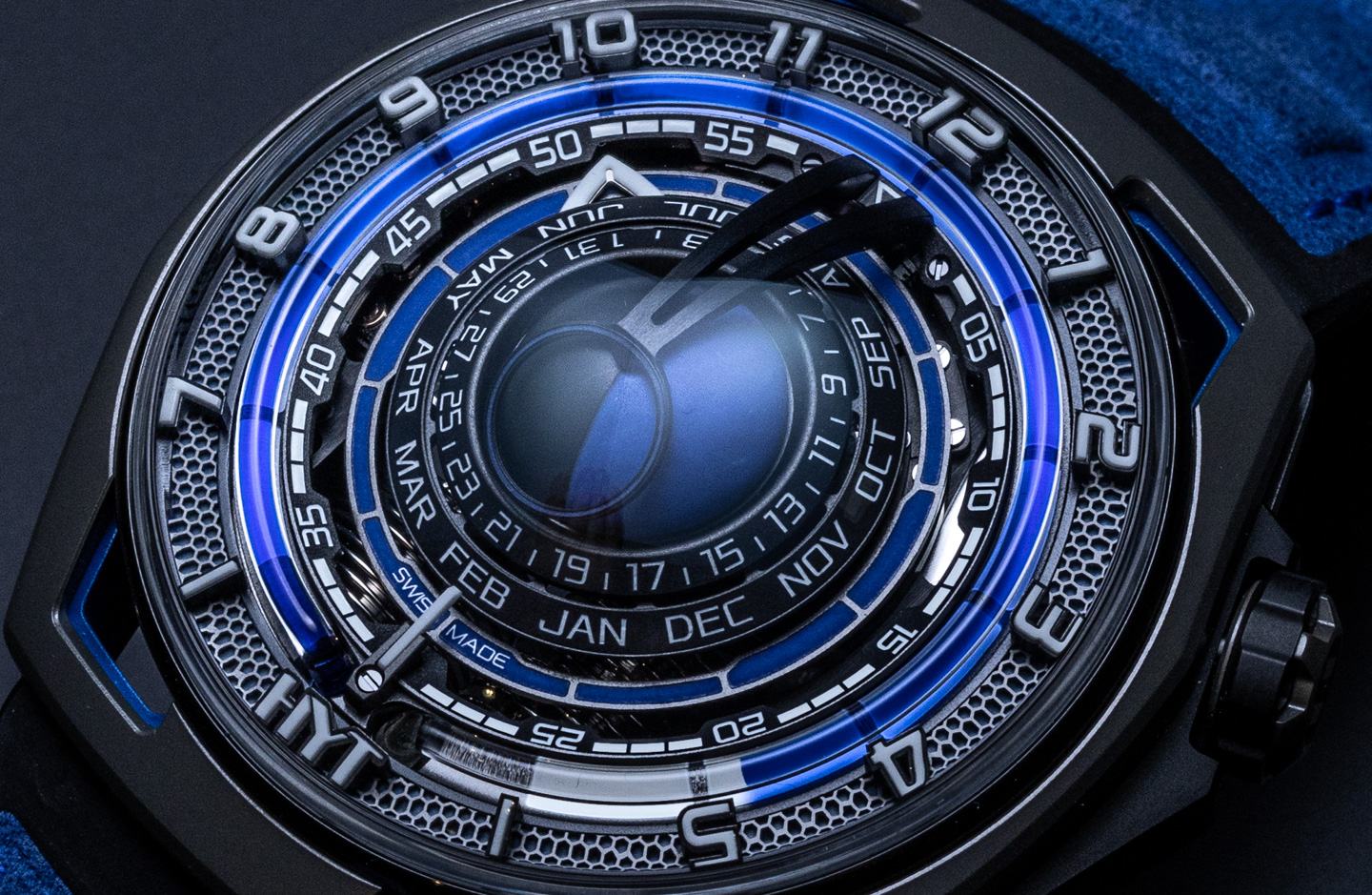 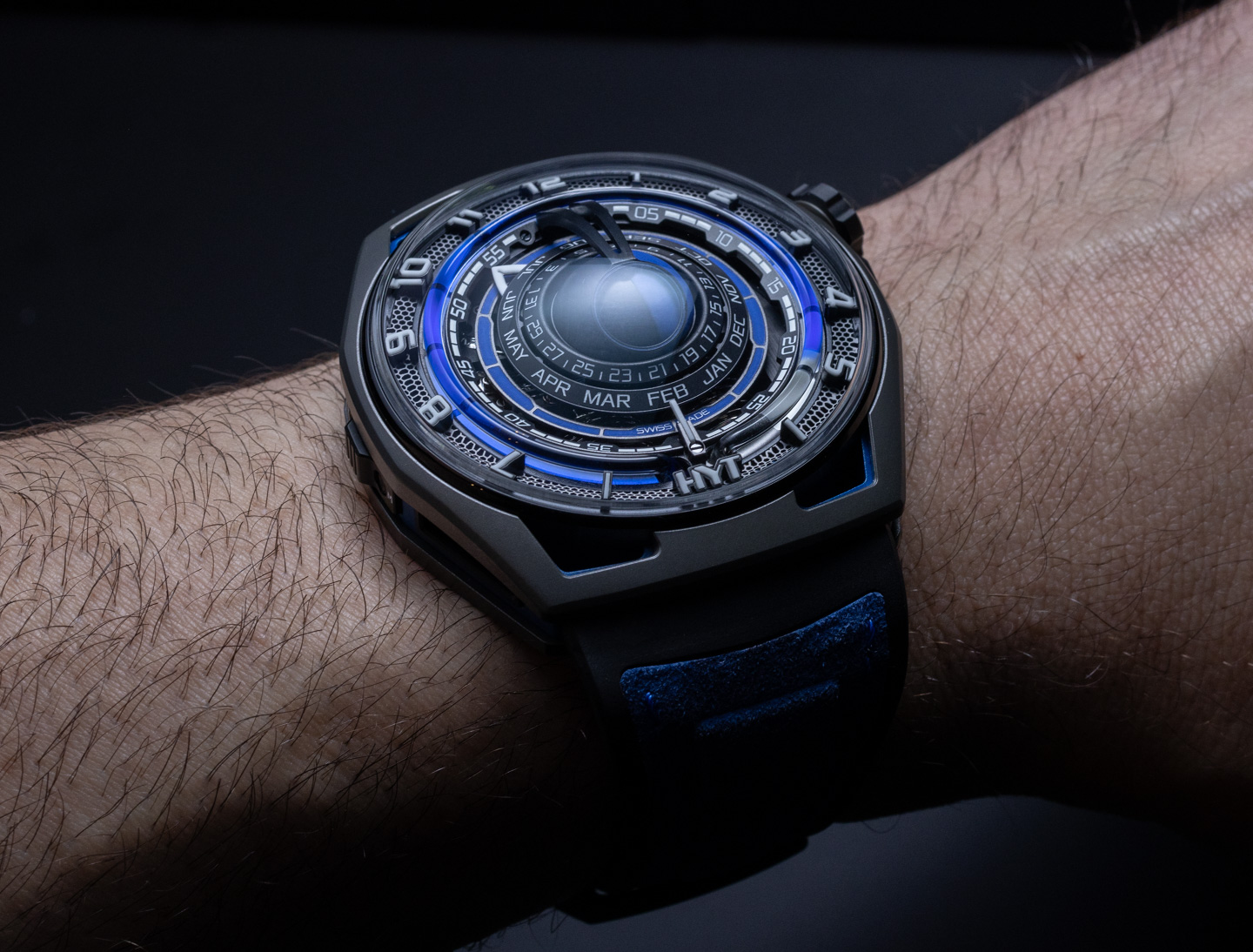 An effective feature of the movement is the inset pushers on the left side of the case that allow for quick adjustment of the moon phase and month indicators. The funny part is that you’d really need to know this watch well to understand that because the symbol for the moon phase indicator is unlike those on the vast majority of moon phrase watches, and the “M” for month could easily be mistaken for “M” for moon. In any event, the watch functions are easy to adjust, and the combination of the practical annual calendar mixed with an emotional moon phase indicator makes for an interesting and original watch-wearing experience.

Attached to the Moonrunner Supernova Blue watch case is a fitted rubber strap with a blue suede-style fabric insert that looks cool and fits nicely on the wrist with a simple buckle and no unnecessary and finicky deployant clasp. Despite the larger case size, this is a very interesting and hip luxury watch that doesn’t feel as though it is trying to be overly glitzy but rather has a space-age instrument vibe that I think Davide Cerrato’s HYT is going for. As part of a limited edition of just 27 pieces, price for the reference H02758-A HYT Moonrunner Supernova Blue watch is 120,000 Swiss Francs. Learn more at the HYT watches website here.