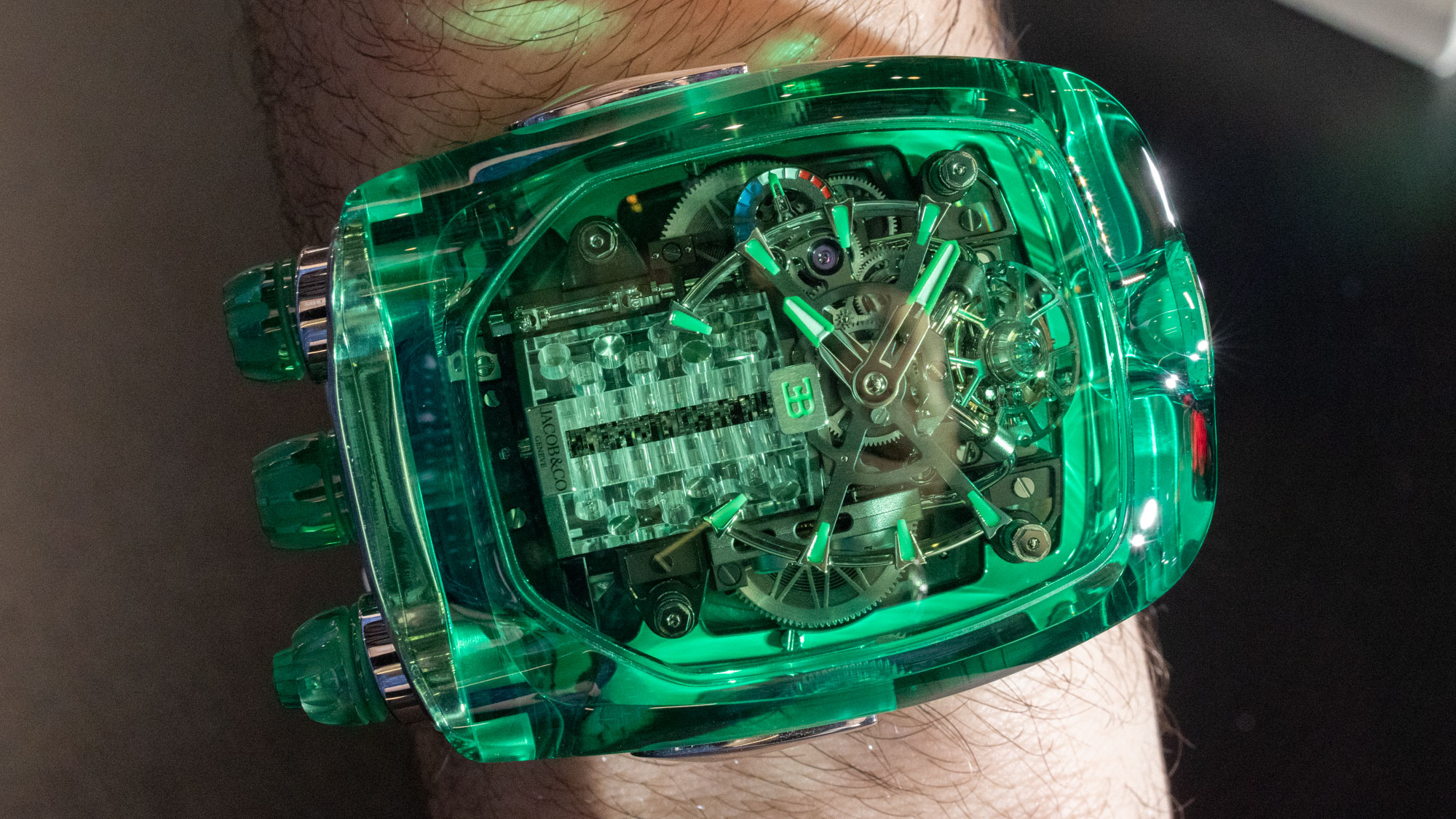 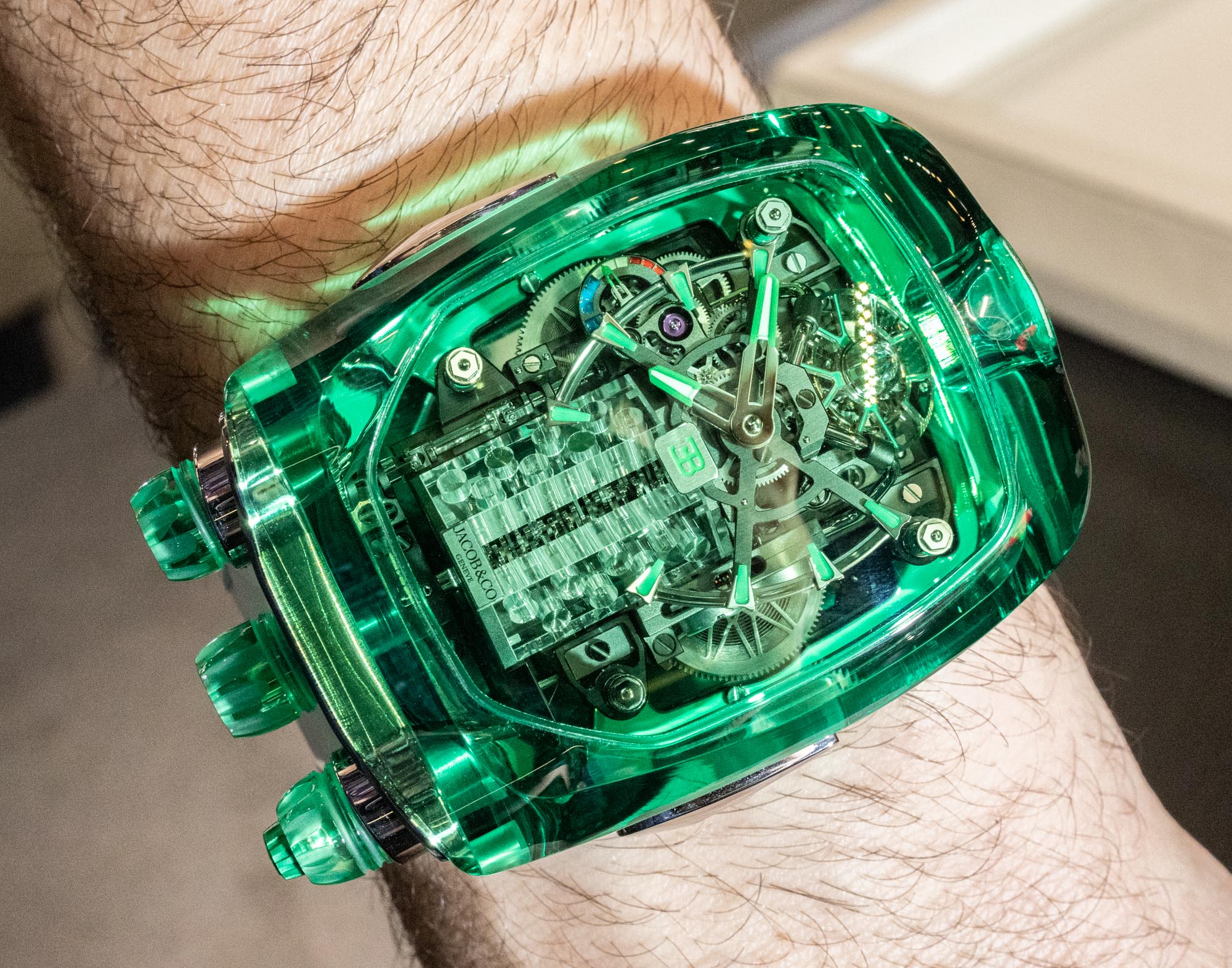 Even though originally released in around 2020, it is not until now that I’ve been able to do a proper hands-on look at a version of the visually and technically impressive Jacob & Co. Bugatti Chiron watches. For years, Parmigiani held a prestigious relationship with the very high-end automaker Bugatti. Jacob & Co. has since taken over the baton of that relationship and has released at least two very different and very wild watches, the Bugatti Chiron being one of them. In addition to the Bugatti Chiron watches that have metal cases, there are the Bugatti Chiron Sapphire models that have mostly sapphire cases. On top of that, some of the sapphire cases are colored, with Jacob & Co. offering at least a few colors of sapphire crystal cases, including blue and this version in green-hued sapphire crystal.

Jacob & Co. further points to the fact that the technique it uses to color the sapphire crystals is proprietary and just as complicated as actually manufacturing and finishing the cases. To color synthetic sapphire, pigments must be introduced during the crystal formation process. This becomes more an art than a science, and material that is created with blotchy or imprecise colors must be rejected. Once a fair color has been achieved, the resulting sapphire crystal must be arduously machined (with a high failure rate, meaning a lot of pieces break) and then finished with hours of hand polishing. Part of the intense level of expense in a watch like this is related to the many many hours required to simply get the case components completed. 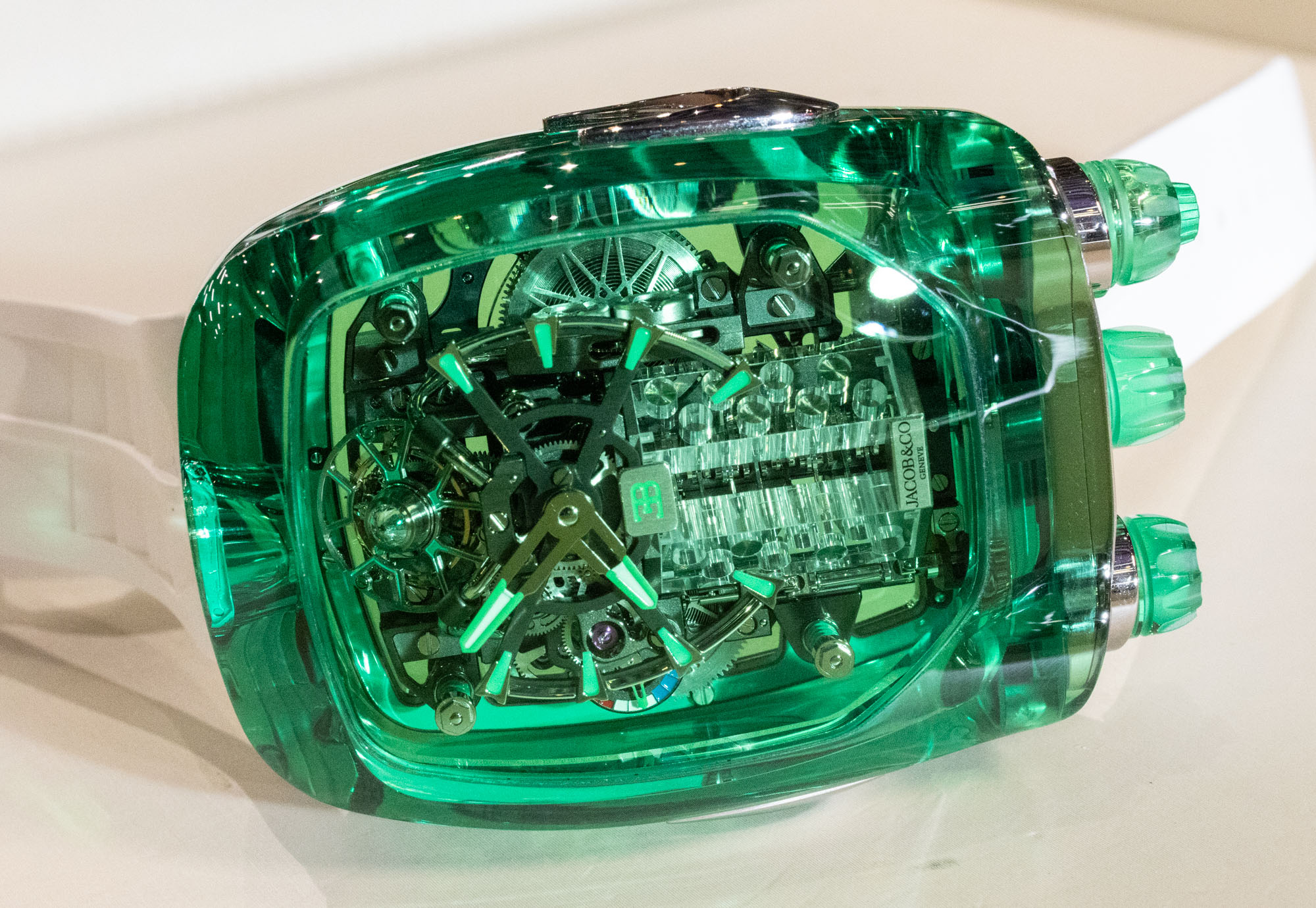 On the wrist, the Jacob & Co. Bugatti Chiron is unlike most other wristwatches in form. It looks a bit like a reverse bullhead since the crowns point down and not up. The case at its largest proportions is 44.4mm-wide, 57.8mm-long, and 21.5mm-thick. The shape of the watch is roughly automotive in form, but it also has elements of dashboard instrumentation (but is not automotive in theme). I also feel that the slightly aerodynamic look of the case mixed with the crowns that look like rocket engines gives the Bugatti Chiron a distinctive spaceship vibe. It might be a good idea to remind any children who want to fly around with this timepiece that it has a retail price far north of a million dollars.

The non-sapphire crystal parts of the case (which is water resistant to 30 meters) are mostly in polished titanium and do a good job of framing the movement along with the suspension system inside the case. That latter part is easy to miss but is a crucial part of the engineering behind this timepiece. The movement holder employs four shock absorbers that secure the movement; these are built with spring struts like in cars. The idea is that the shock absorbers help reduce vibrations flowing to the mechanical movement, which will reduce rate consistency and thus accuracy. You can see the struts around the four corners of the movement through the case – which is part of the neat thing about totally or semi-transparent sapphire crystal cases. 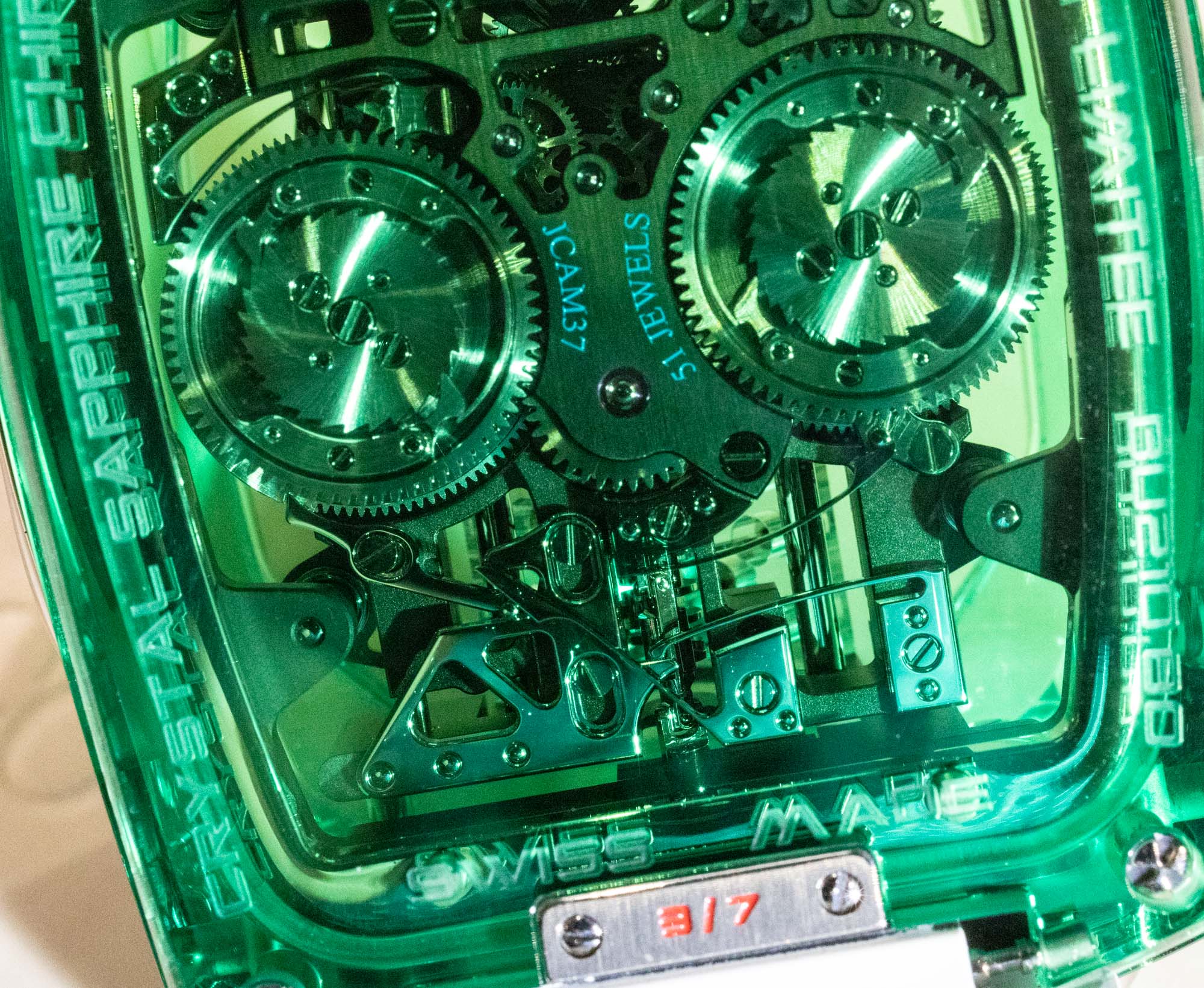 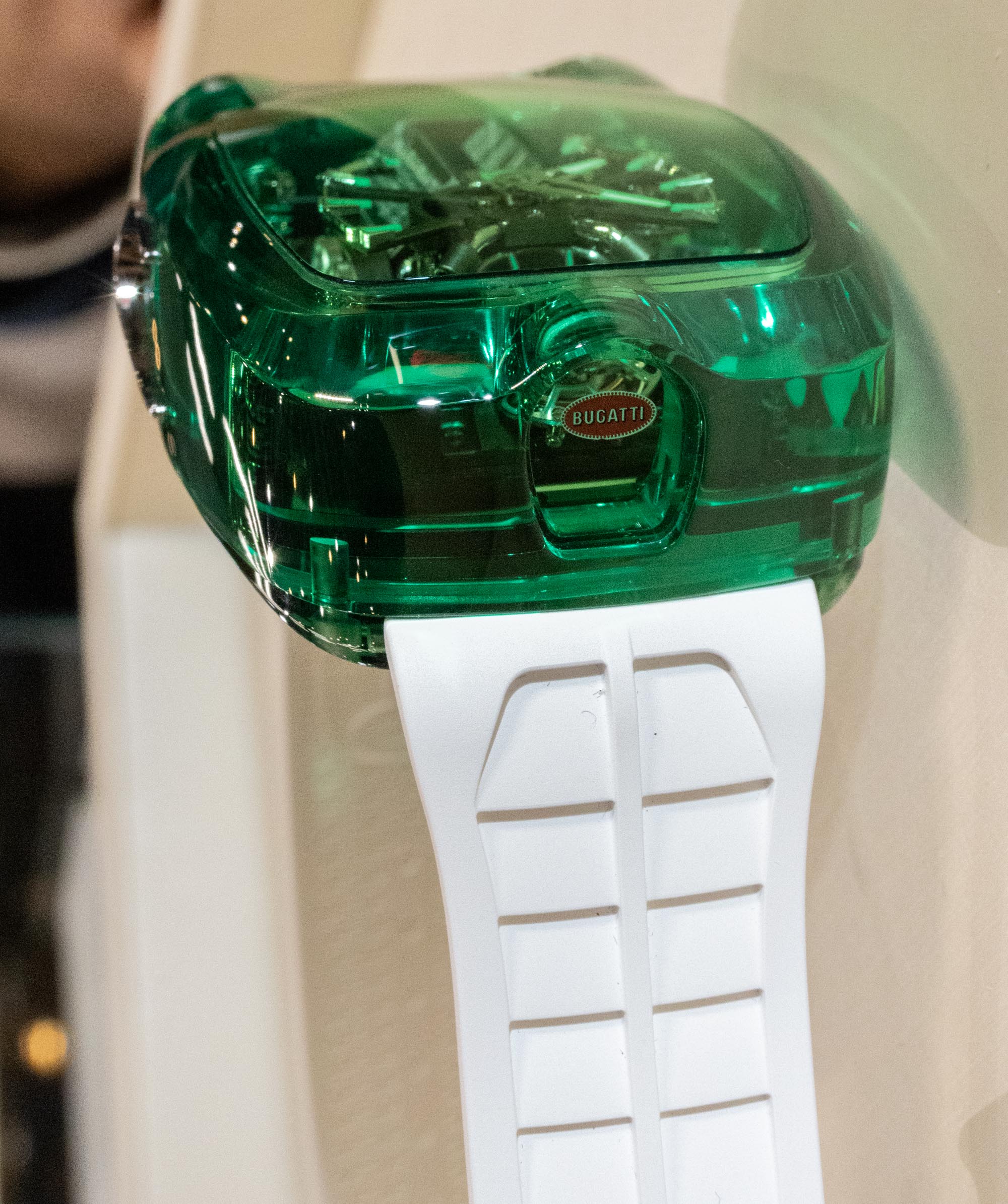 The specially designed movement inside the Bugatti Chiron watch is the Jacob & Co. caliber JCAM37, which is manually wound and made up of 578 components. The movement features the time with a slightly inclined 60-second tourbillon (at the 12 o’clock position on the case) and also has a power reserve indicator placed at the 9 o’clock position. The movement further features a whimsical animation in the form of a sapphire crystal and metal “engine block” in a W16 array, with actually functioning piston shafts. This latter animation doesn’t operate all the time, but on demand when one of the lower pushers is activated, the W16 engine comes to life with all 16 piston heads moving up and down as they would in a combustion engine. I think Bugatti is the only car maker at this time to produce a W16 engine, which is more or less like two V8s put next to each other.

The JCAM37 manually wound movement operates at 3Hz (21,600 bph) with 60 hours of power reserve. The movement architecture is also a primary visual attractor in the watch and is designed to be interesting to view from all angles. Of course, it is a strange mechanism with a combination of functional and playful elements, but isn’t that exactly what fans of Bugatti appreciate about the brand’s supercars?  For this reason, I believe that Bugatti and Jacob & Co. make for good bedfellows. 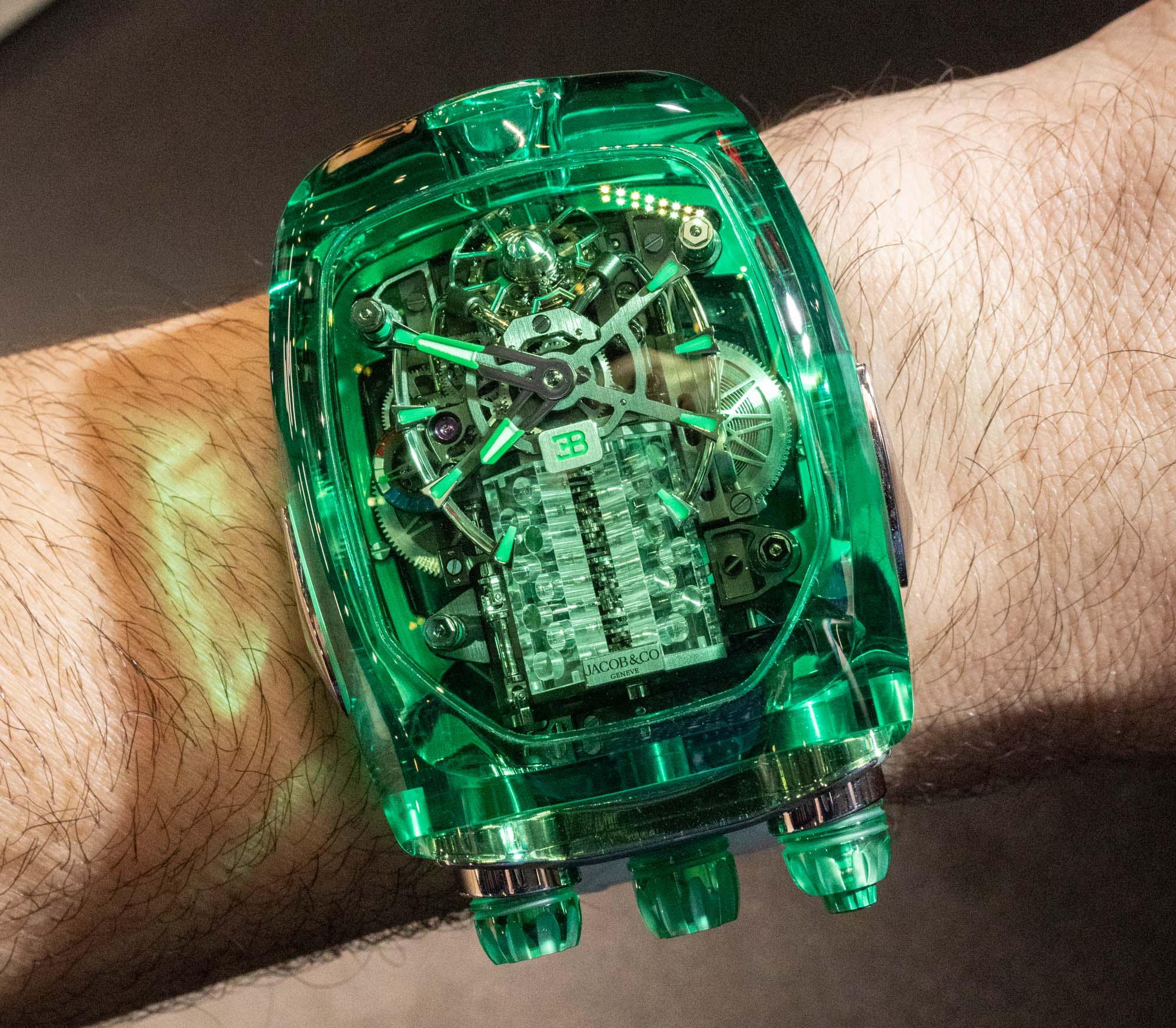