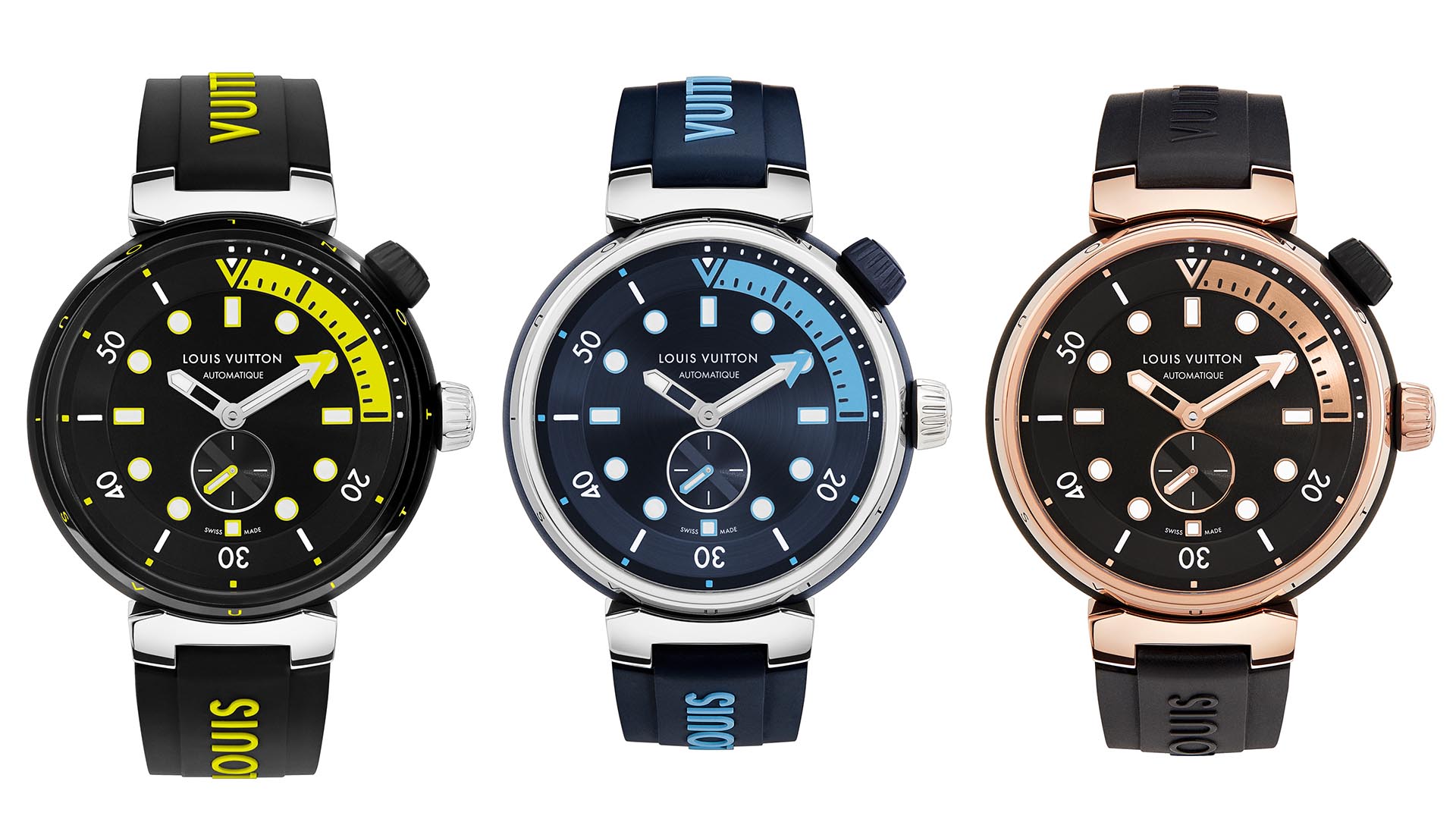 Despite its status as a household name and an absolute behemoth in the fashion industry, Louis Vuitton’s in-house luxury watchmaking efforts remain relatively under-the-radar. The centerpiece of this unsung collection is the Tambour line, which launched the brand’s in-house watchmaking efforts in 2002 and has remained a focal point for releases ever since. For 2021, Louis Vuitton gives the Tambour design a vibrant and sporty new personality with the Tambour Street Diver series. Combining super-compressor diver elements with Louis Vuitton’s sense of form and attention to detail, the new Louis Vuitton Tambour Street Diver offers a uniquely rounded and luxe counterpoint to the usual harsh and tool-oriented diver aesthetic.

The new Louis Vuitton Tambour Street Diver line keeps the Tambour’s signature sloping drum-inspired case and attached lugs but reinvents the 44mm form in three dramatically different colorways. Without a doubt, the most luxurious of the trio is the Louis Vuitton Tambour Street Diver Black Blaze, which combines a black PVD stainless steel central case with pink gold along the tall outer bezel, 3 o’clock signed crown, and the Tambour’s distinctive attached claw lugs. Skirting the line between masculine and androgynous design, this smooth form carries some interesting left-field unifying touches. Both the screw-down main crown at 3 o’clock and the 2 o’clock screw-down crown for the internal dive bezel echo the tapering semi-conical shape of the central case, while the sides of the outer bezel mark out each of the 12 hours with “LOUIS VUITTON” in slender engraved and enameled letters. The caseback features a smoked display window overlaid with the brand’s iconic LV emblem, and while the design carries clear diver hallmarks, the case manages only a somewhat disappointing 100 meters of water resistance. The Tambour Street Diver Neon Black takes these same elements in a decidedly more sporting direction, with a full black PVD stainless steel central case complemented by polished stainless for the main crown and lugs. Louis Vuitton breaks up the profile of the tall sloping case here by adding a gloss finish to the black PVD bezel while the main case remains matte. Flashes of yellow on the bezel and 2 o’clock crown give this variant a more arresting and aggressive feel in initial images. Lastly, the Louis Vuitton Tambour Street Diver Skyline Blue offers a softer and more versatile side with a matte-navy PVD mid-case, accented with a touch of flash from polished stainless for the lugs, bezel, and main crown. 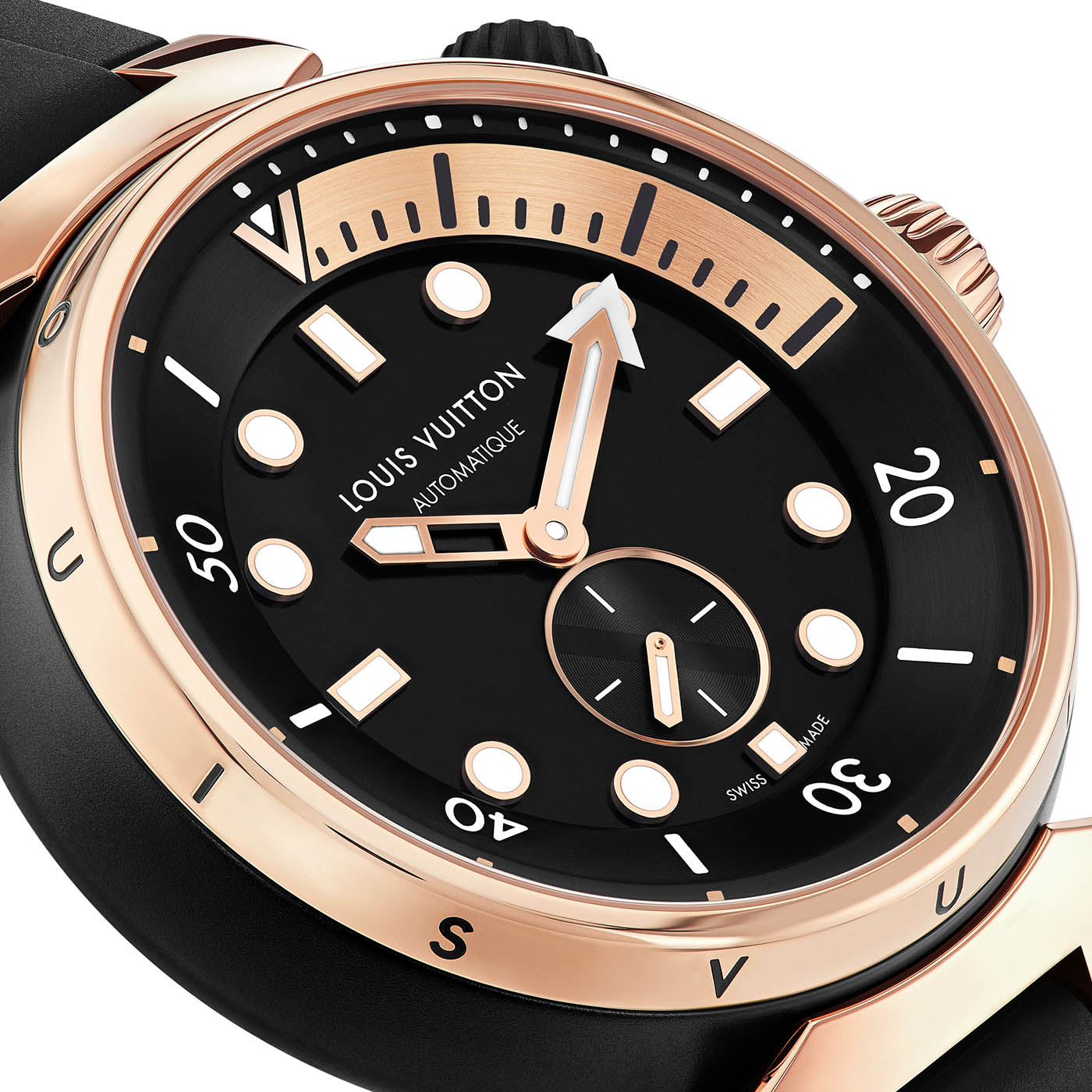 All three of these versions of the Louis Vuitton Tambour Street Diver offer different interpretations of the same core dial design. With a broad, graphic inner dive bezel, a soft and luxurious take on applied diver indices, and a distinctive skeletonized sword and arrow handset, there’s a touch of the classic IWC Aquatimer in the look but filtered through a chic Parisian lens. The 6 o’clock small seconds subdial offers a few subtly charismatic elements as well, with a polished outer ring and azurage cut through with a diagonal matte stripe to form the flag signal for a scuba diver in the water. From this elemental pattern, the three models diverge. The Tambour Street Diver Black Blaze adds pink-gold hardware and accents on the dive bezel for a unified look with the case and continues the refined undercurrent of the design with a subtle radially brushed black main dial surface. For the Tambour Street Diver Skyline Blue, Louis Vuitton keeps this radially brushed finish but interprets it in a deep midnight blue, accenting it with bright sky blue touches throughout for a more nautical feel in images. In keeping with the more aggressive case finishing, the dial of the Tambour Street Diver Neon Black opts instead for a matte black finish, shot through with pops of screamingly vibrant yellow. 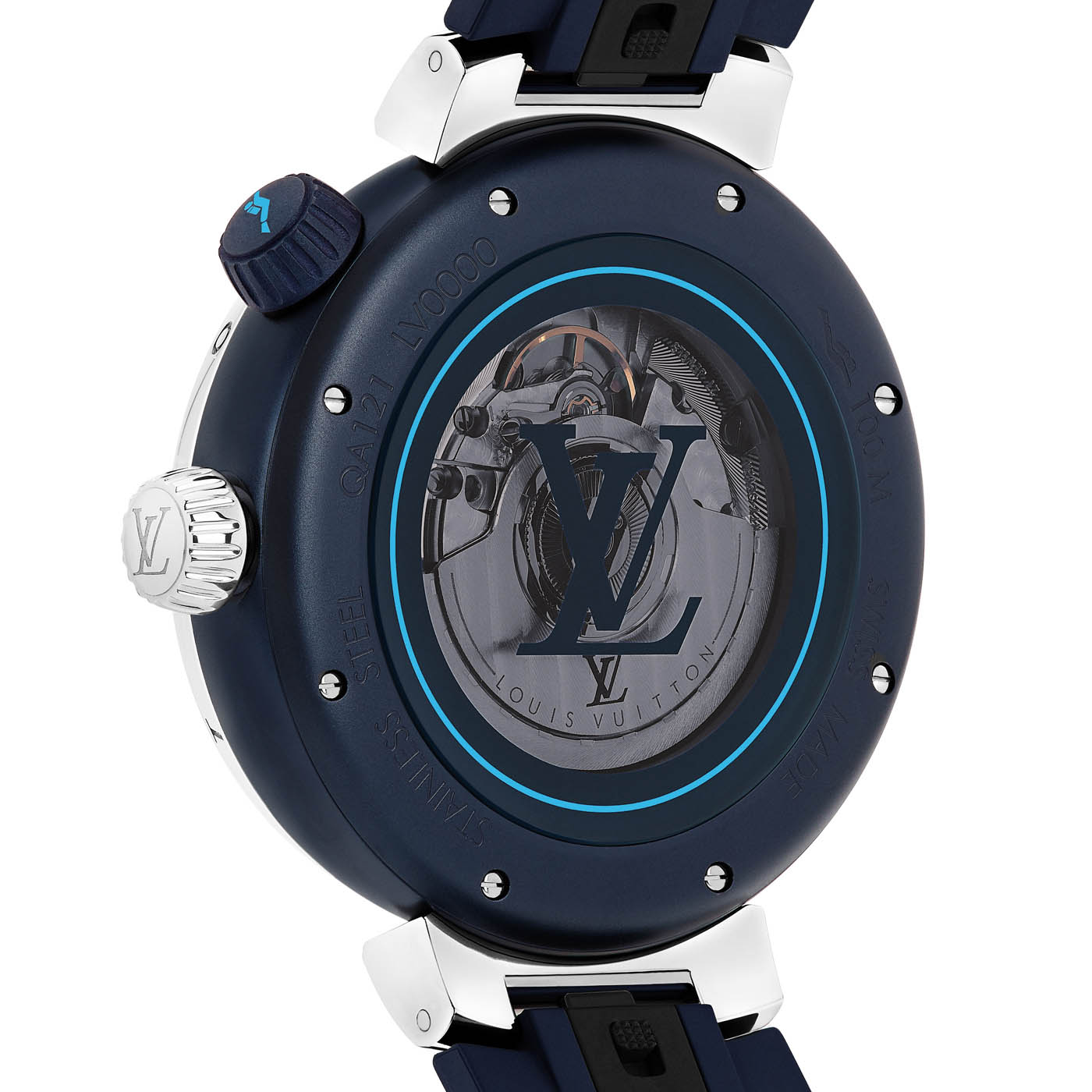 Louis Vuitton powers the Tambour Street Diver series with an unnamed automatic movement. While the brand itself offers few details surrounding this powerplant, it’s likely that, like previous sub-seconds Tambour models, this movement could be a decorated variant of the ETA 2895-2. The positioning of the sub-seconds hand lends credence to this possibility, and if so, performance is around 42 hours of power reserve at a 28,800 bph beat rate. 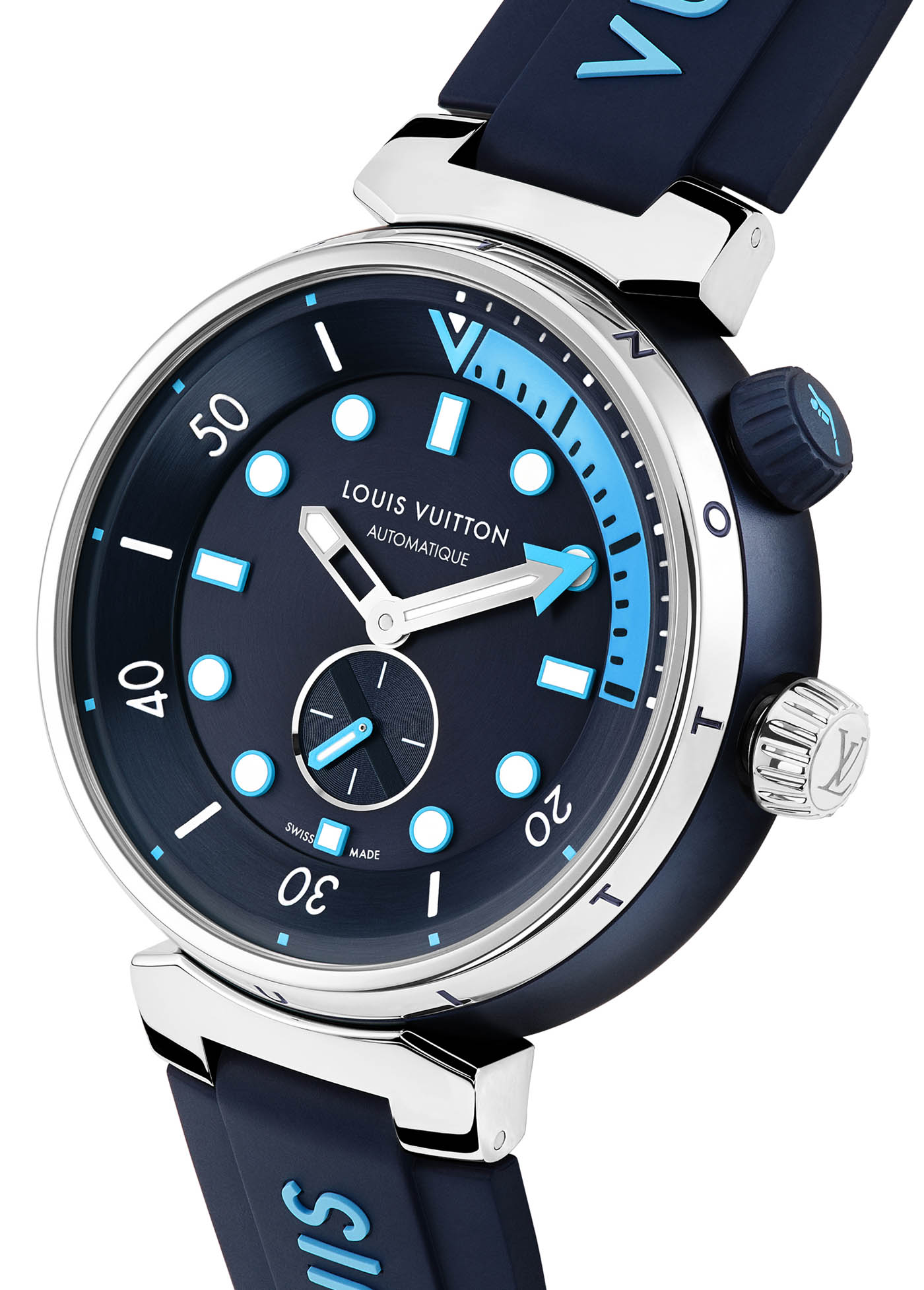 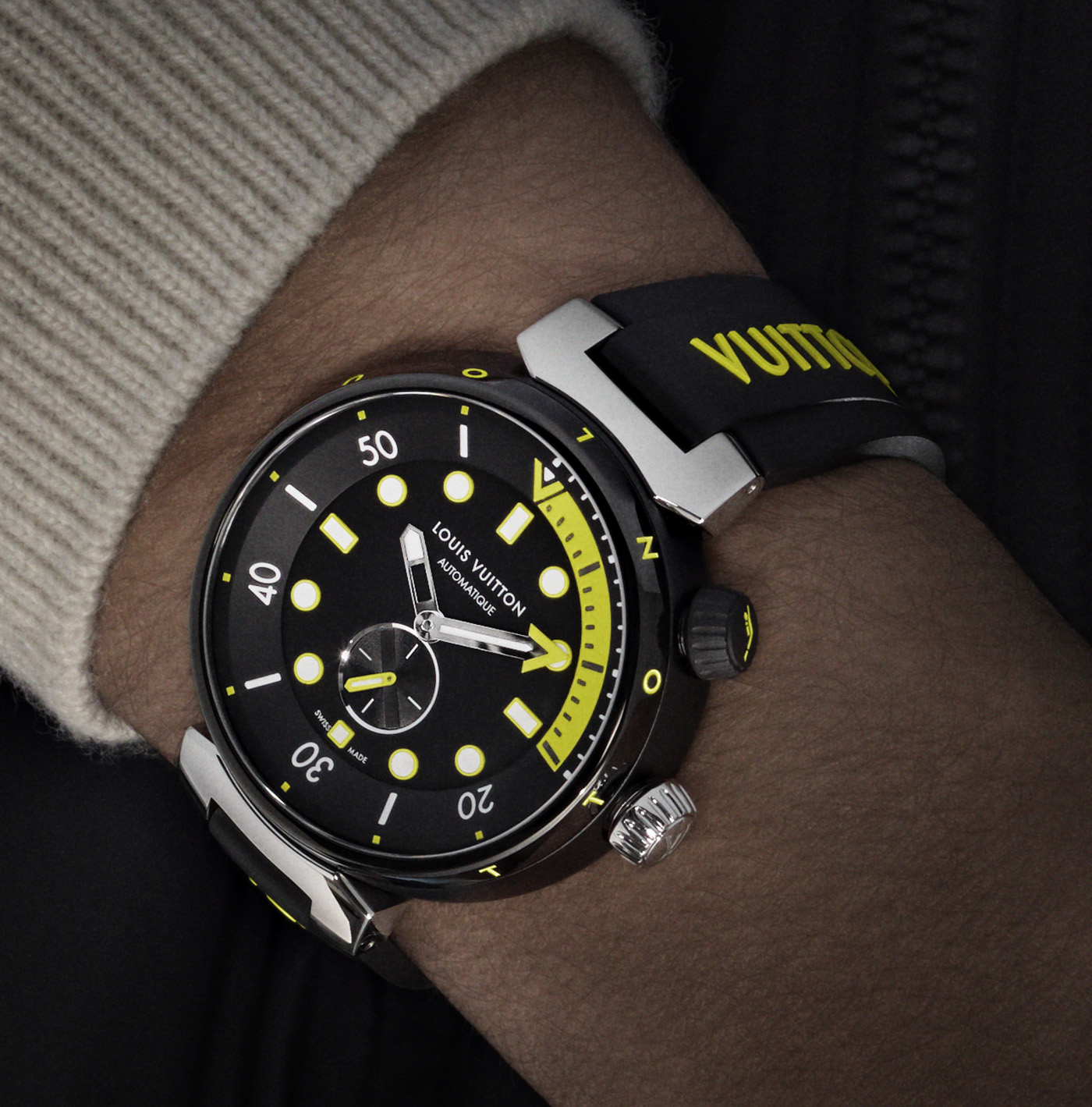