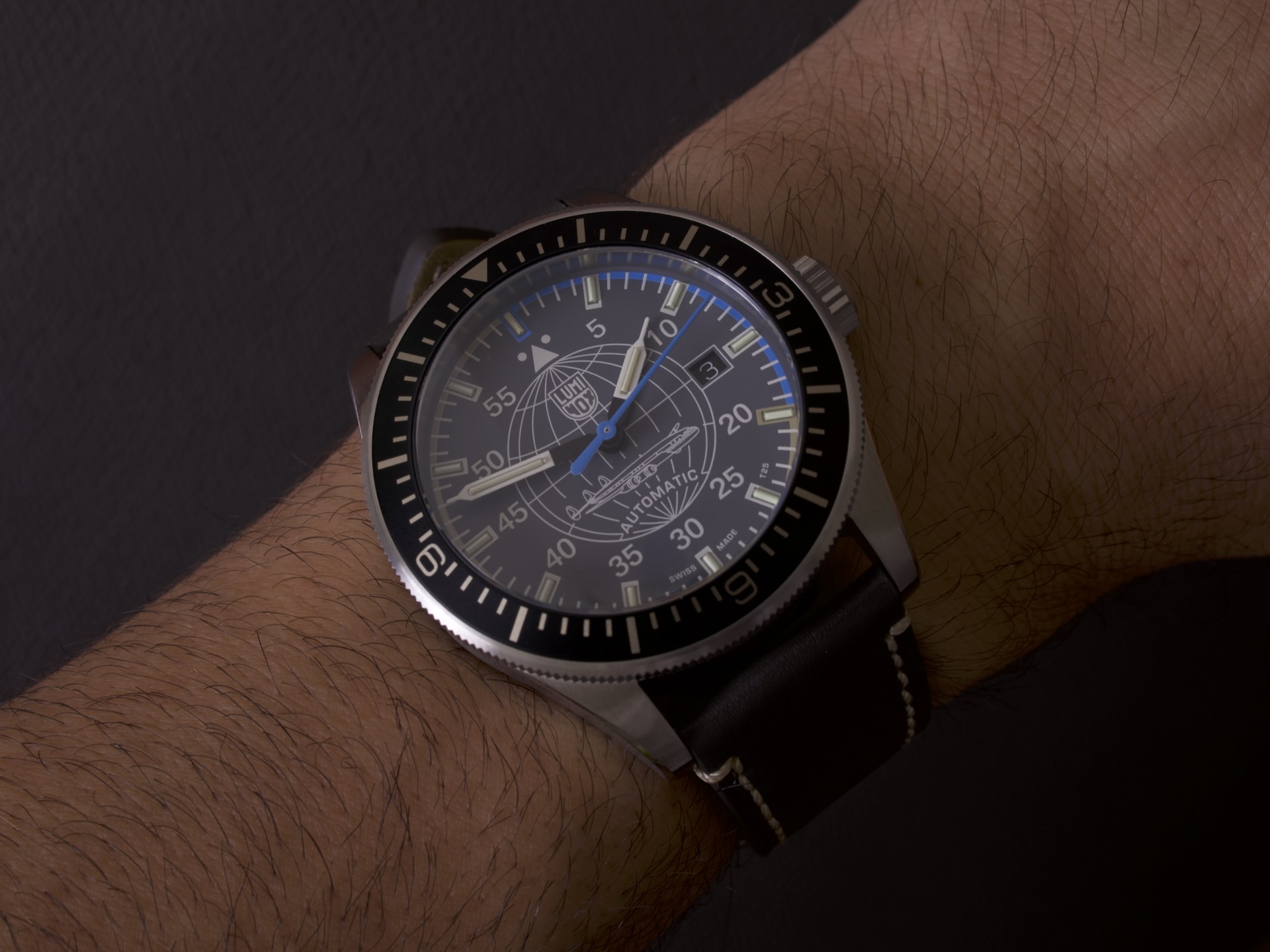 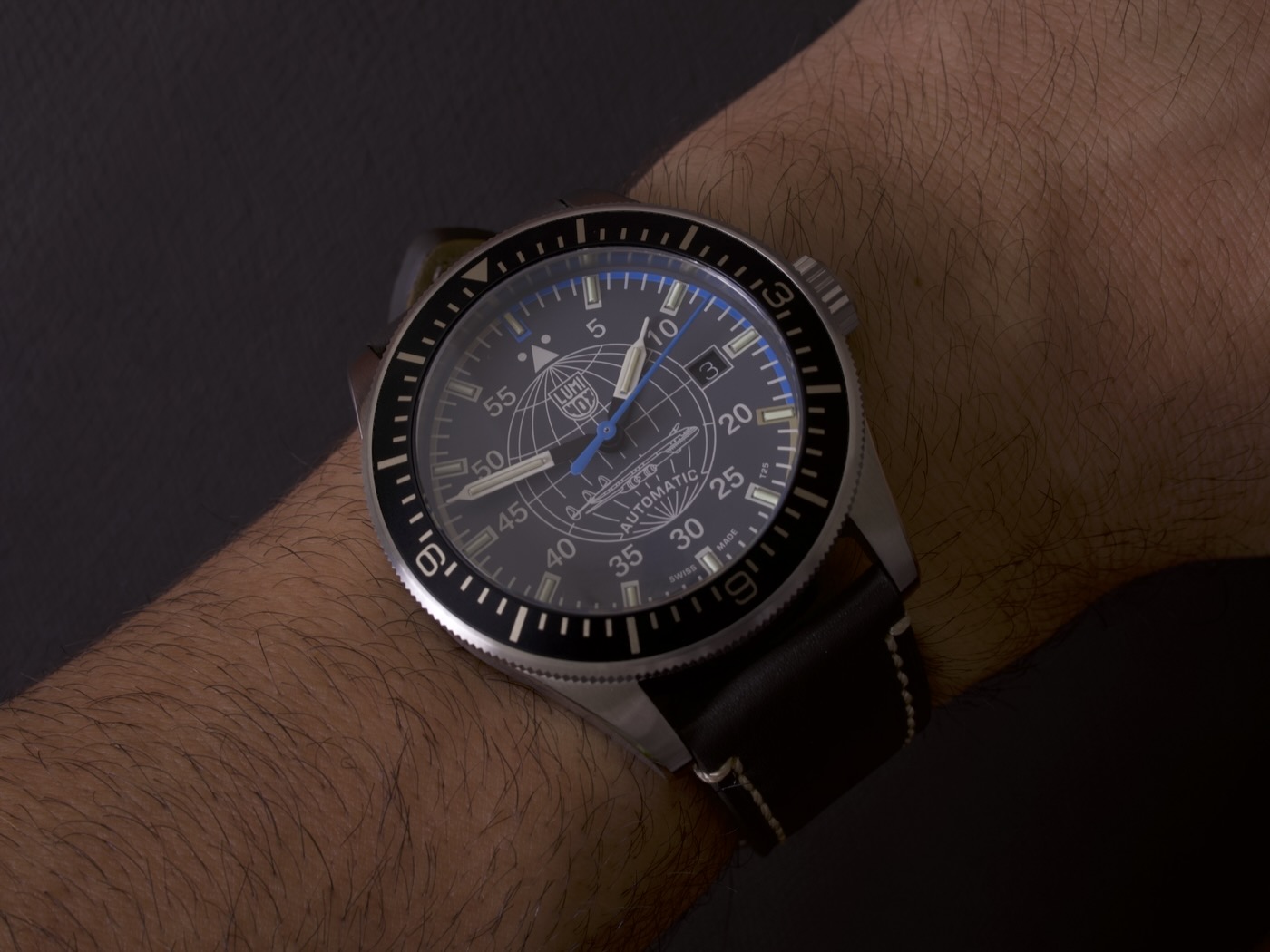 Luminox, a brand built on pioneering the use of tritium tubes for outstanding nighttime illumination, has always been forward-leaning in its design sensibility. Its watches tend to be big, bold, and always legible. Because of the brand’s reputation for creating rugged, easy-to-read (day or night), and reasonably priced watches, it has become a go-to within the armed forces. Indeed, the brand has created more than its share of watches for different branches of the U.S. military, including the Navy SEALS and U.S. Air Force F-117 Nighthawk pilots. As such, watches that harken back to a bygone era are something of a novelty for Luminox (unlike the myriad brands whose core lineup seems to consist entirely of vintage-inspired watches). The Luminox Constellation Automatic 9602 is undoubtedly a tribute to the past, but don’t worry, it still houses those stellar tritium tubes and is just as rugged and modern in its construction as any other Luminox. 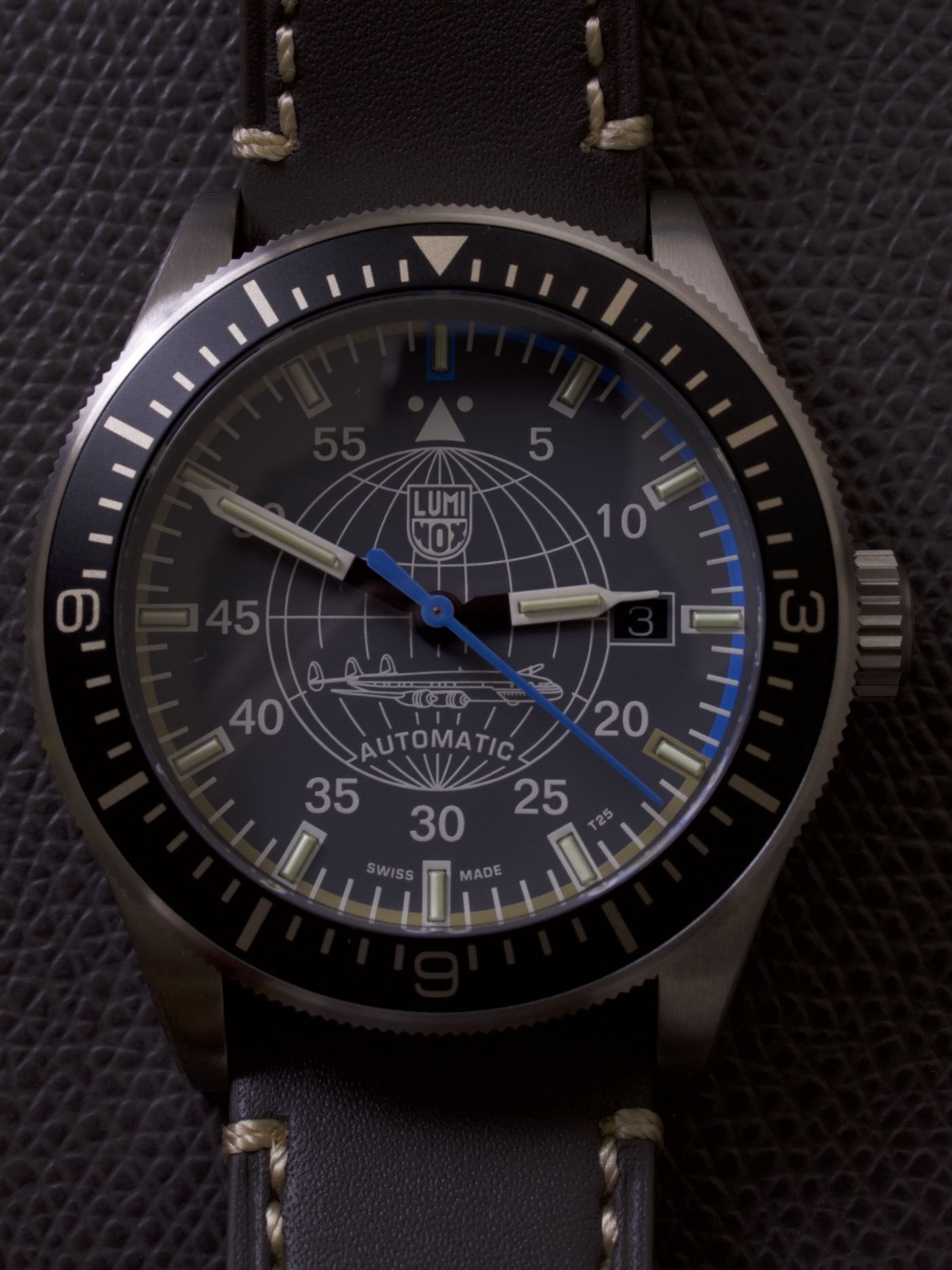 Luminox named this watch in honor of Lockheed’s legendary Constellation airliner. With a pressurized cabin, the four-engine, propeller-driven civil airliner was able to fly at high altitudes, avoiding bad weather and turbulence, and providing smoother, safer travel for the public. Originally introduced in 1943 and produced for the next 15 years, the Constellation saw widespread use for nearly half a century — a testament to the airliner’s reliability. Though the Constellation revolutionized air travel for civilians, it’s likely best known for the records it set, including the 1944 sub-7hr flight from California to Washington DC, with Howard Hughes and TWA president Jack Frye at the controls. 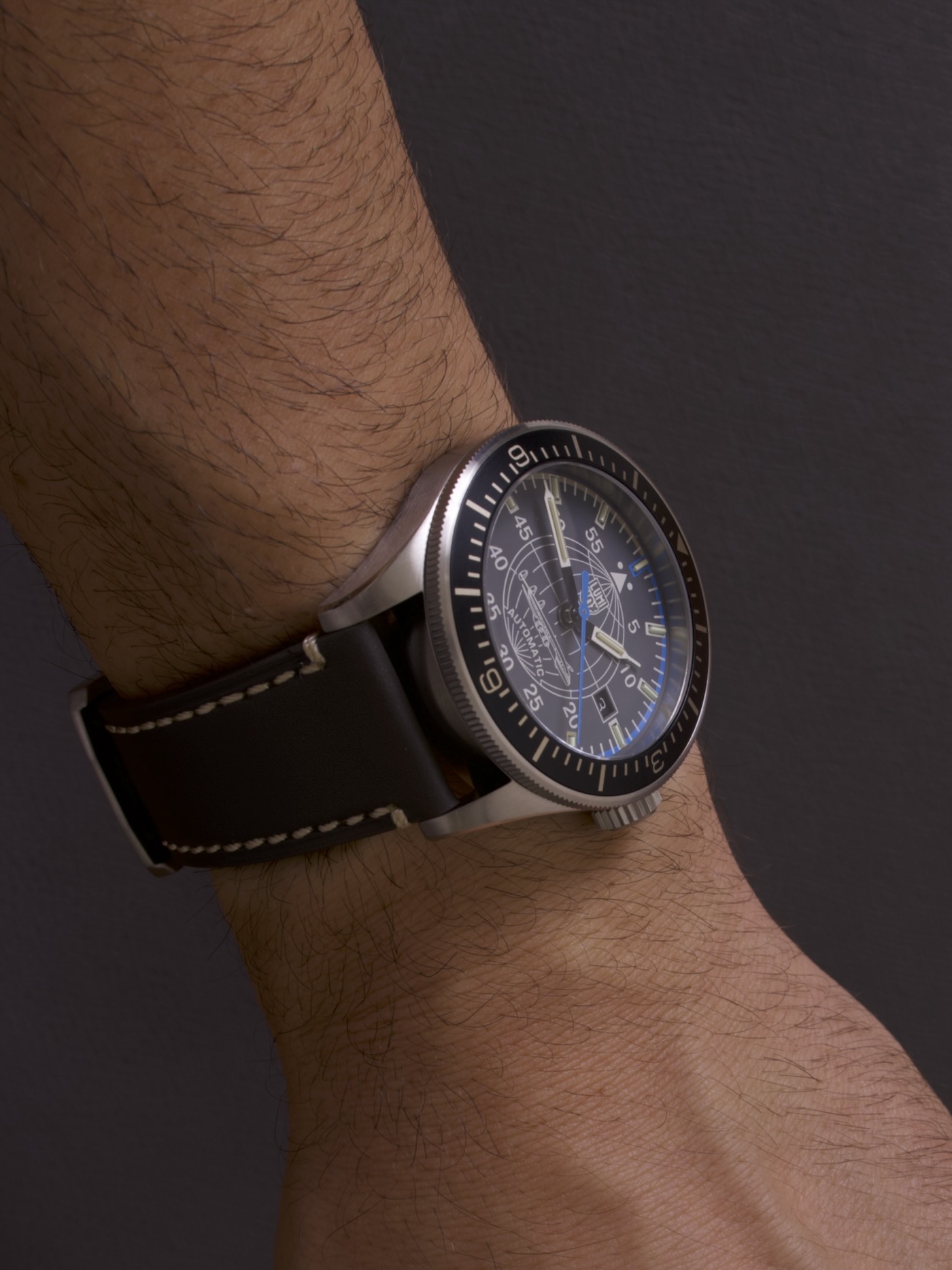 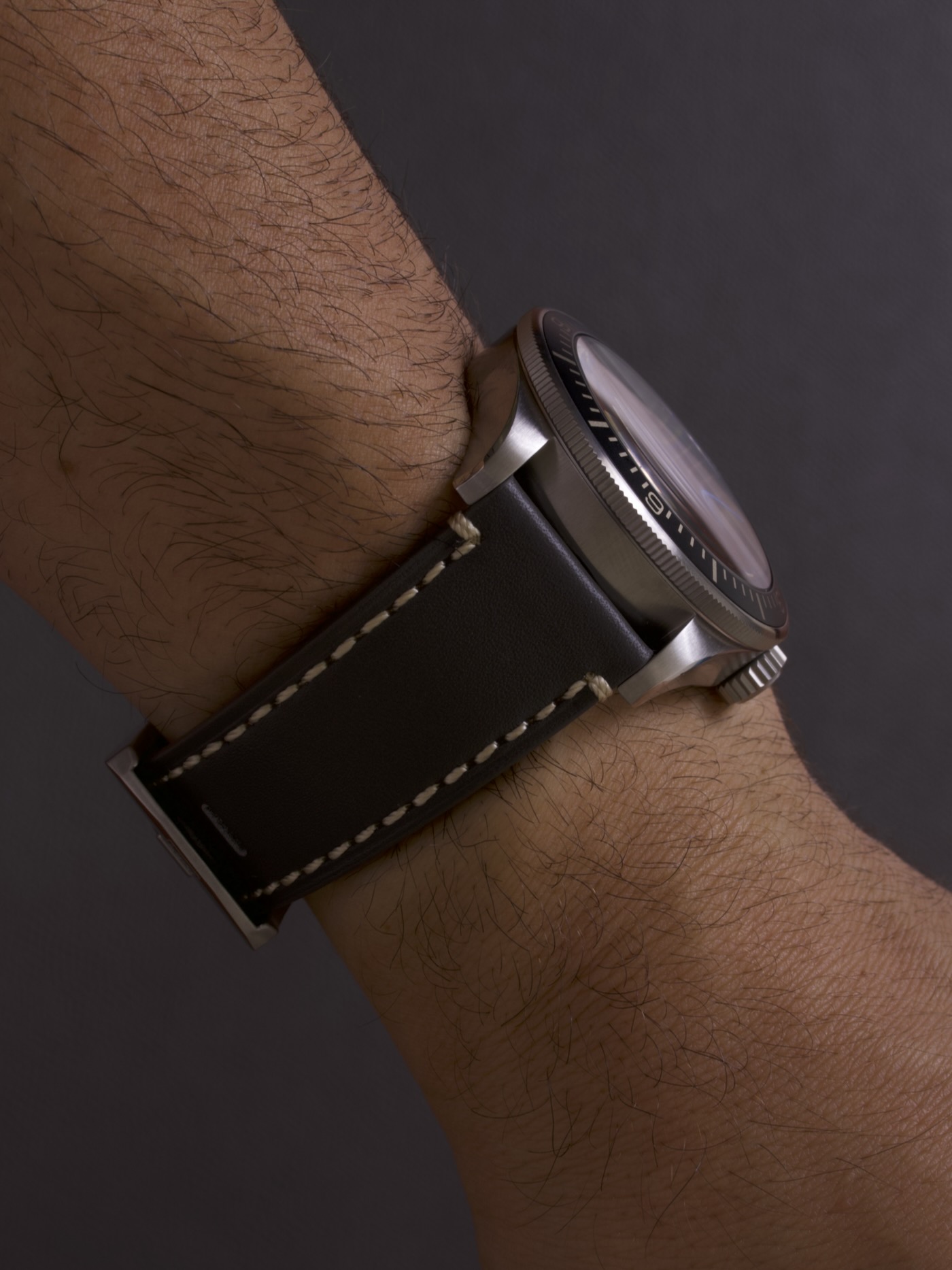 Given Luminox’s longstanding links to aviation and the U.S. Air Force, the Constellation Automatic is a natural fit. Housed in a 42mm stainless steel case with bi-directional rotating bezel and 100m of water resistance, the Constellation Automatic has classic lines that are well-executed with a mix of brushed surfaces and polished chamfers. The conservative case is a nice backdrop for the dial and bezel, which is where things get interesting. 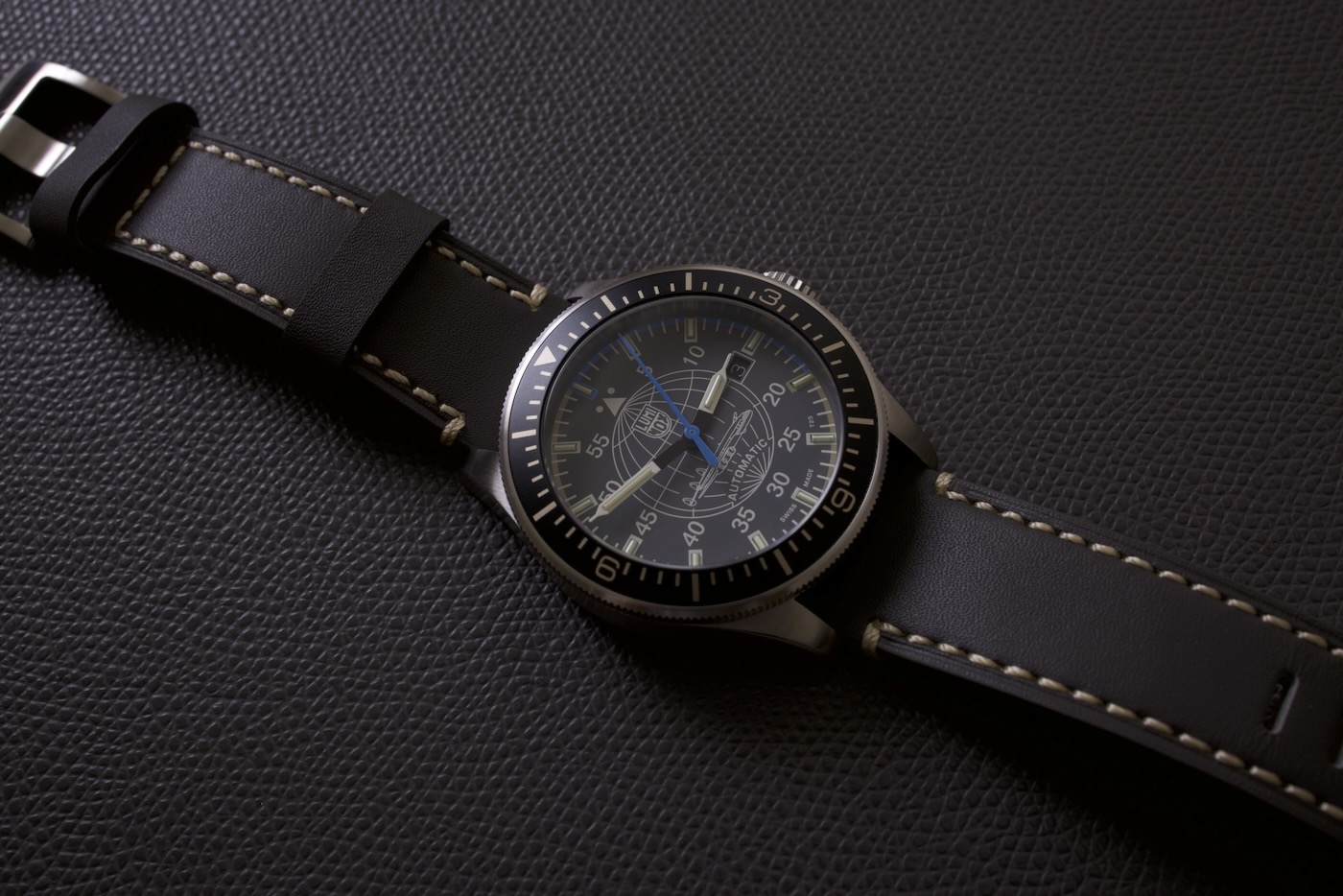 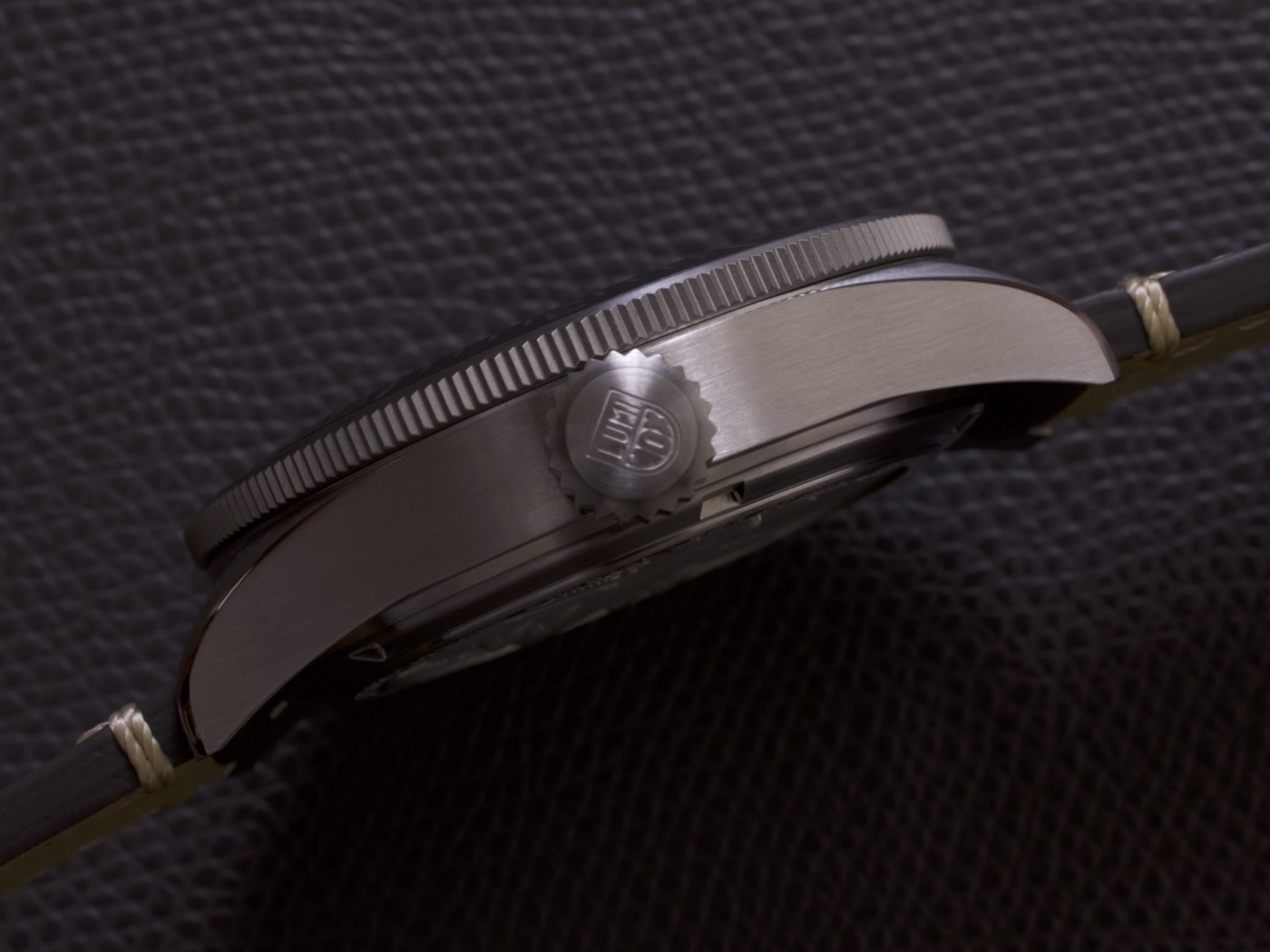 Luminox took a novel approach with the bezel, as it’s technically a 12-hour bezel, which is great for easily tracking two time zones. However, Luminox only added Arabic numerals at 3, 6, and 9, with minute markers throughout the rest of the bezel insert, allowing you to track elapsed time more easily than with a 1-12 bezel. 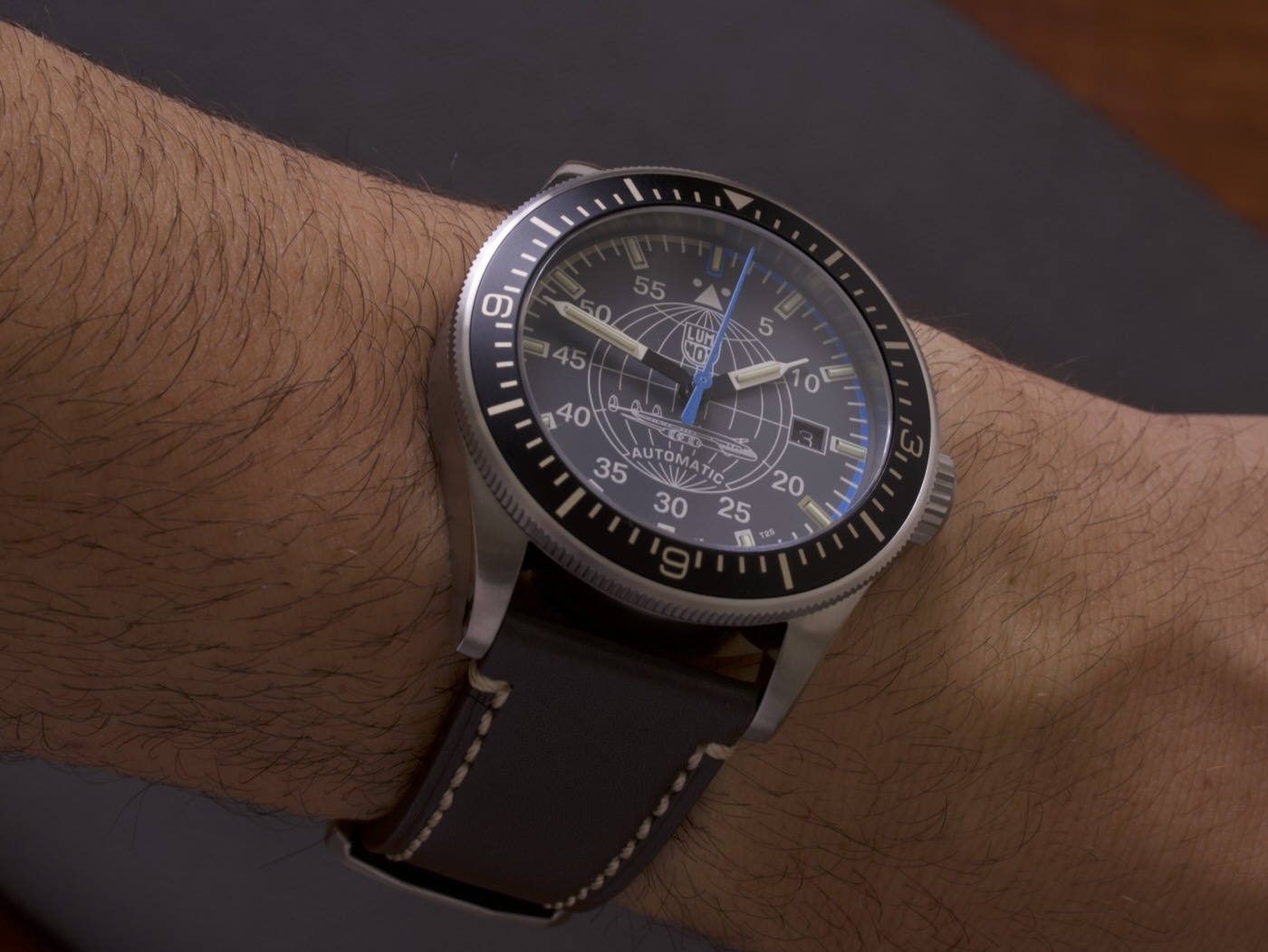 Luminox offers three different colorways of the Constellation Automatic: white dial with red and green accents, black dial with red accents, and the gray dial with blue accents we have here. Regardless of which model you choose, the dial has classic pilot watch aesthetics, including the 5-55 numerals and triangle with dots at 12 o’clock. That said, it’s the illustration on the dial, with its classic mid-century aviation aesthetic, that’s the show-stopper. Sure, it won’t be for everyone, but for fans of aviation history, it’s a lovely touch that makes for a great conversation starter. The blue accents, both on the chapter ring and seconds hand, provide a welcome contrast to the otherwise monochrome aesthetic.

Since this is a Luminox, you know things will get interesting once the lights go out. The Constellation features green tritium tubes for the hour markers, with orange tubes at 12 o’clock and on the hour and minutes hands. If you haven’t experienced tritium tubes before, they don’t require a charge from sunlight, don’t fade throughout the night, and are truly astonishing as their colors shine at night. 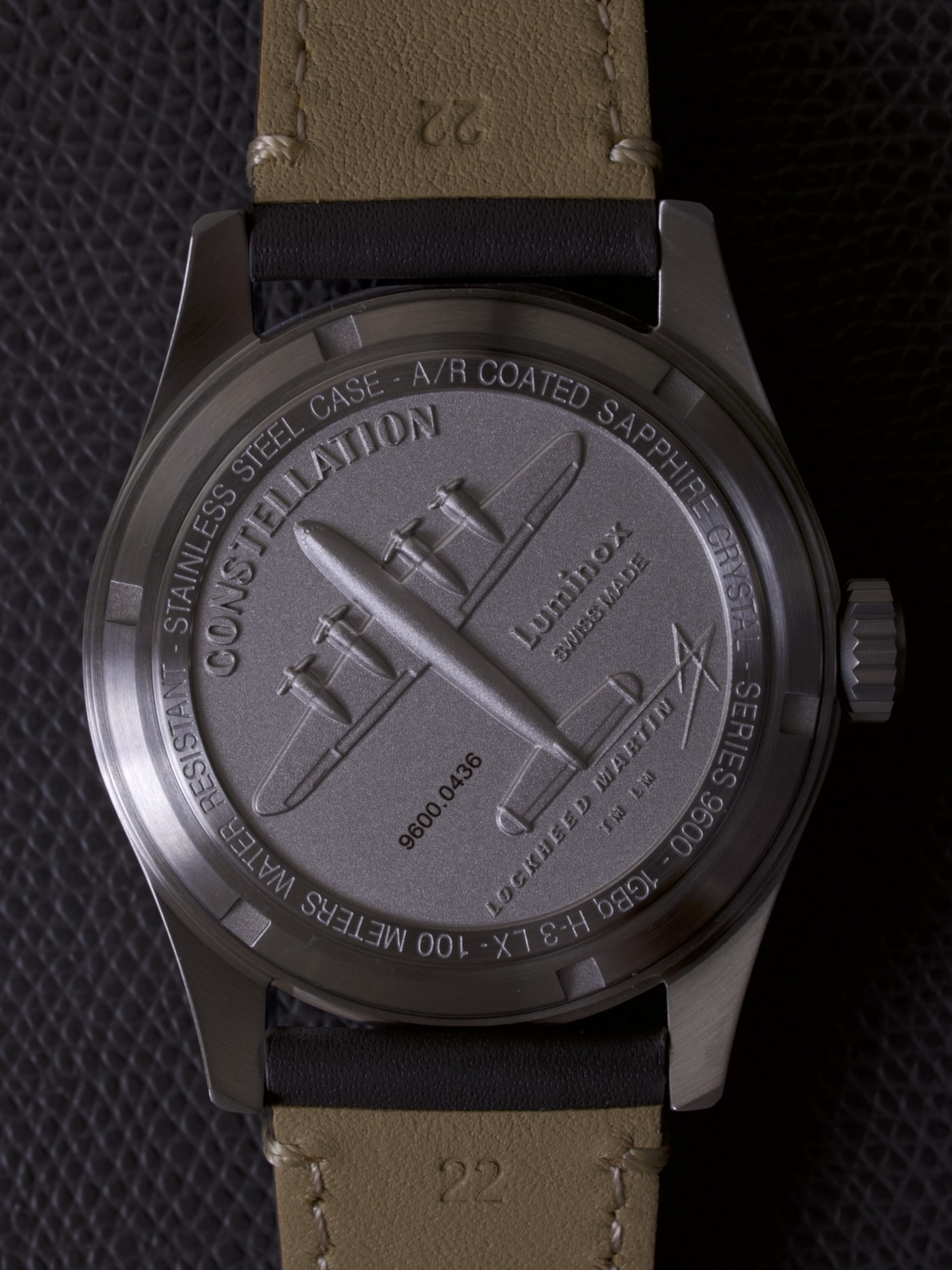 Luminox chose to power the Constellation Automatic with the now-familiar Sellita SW200-1 automatic movement. The Swiss movement features 38 hours of power reserve and, while you don’t get a matching sapphire crystal to see the movement, that’s no bad thing, as Luminox has equipped the Constellation Automatic with a deeply engraved caseback that features the famous airliner. 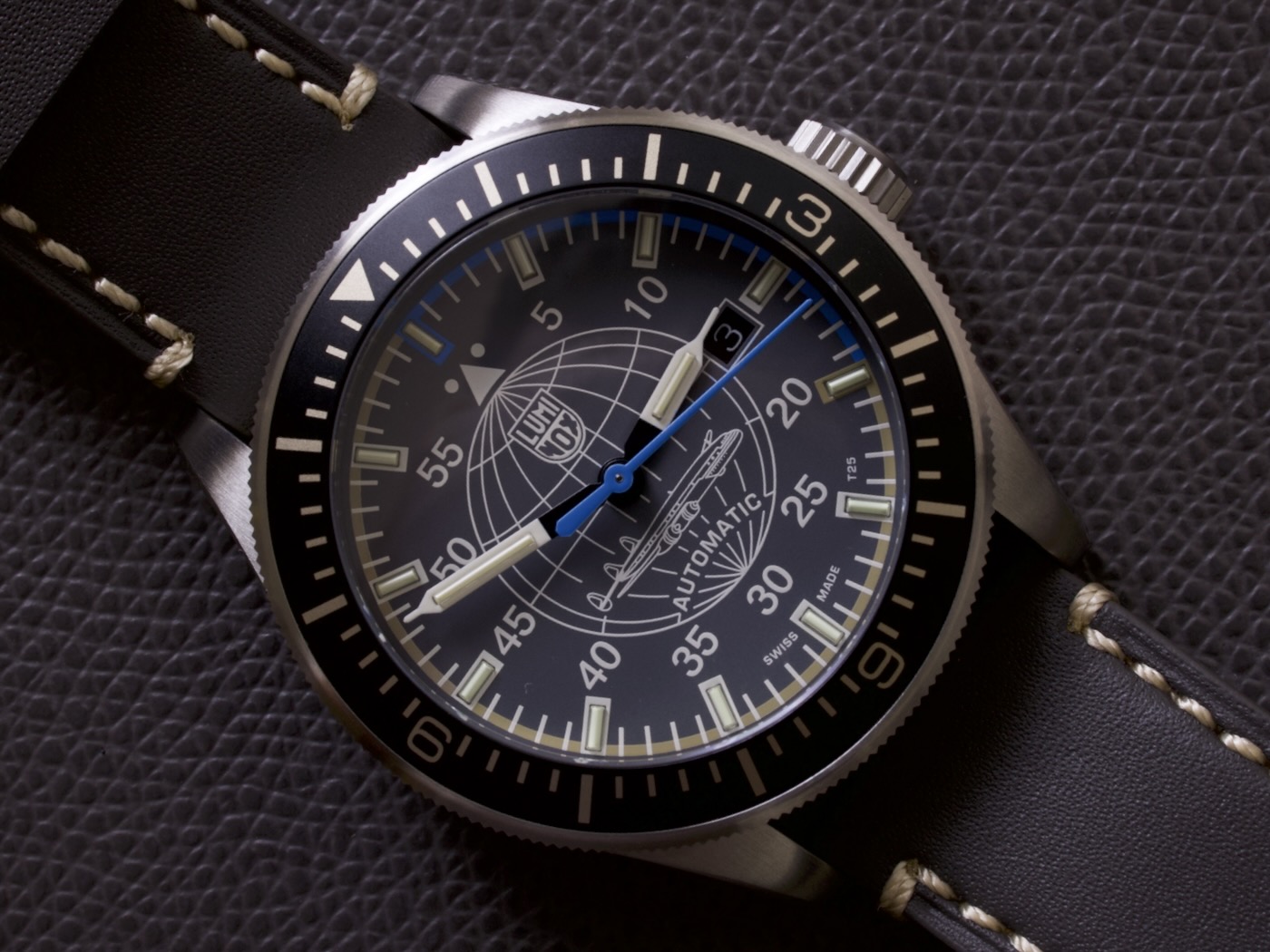