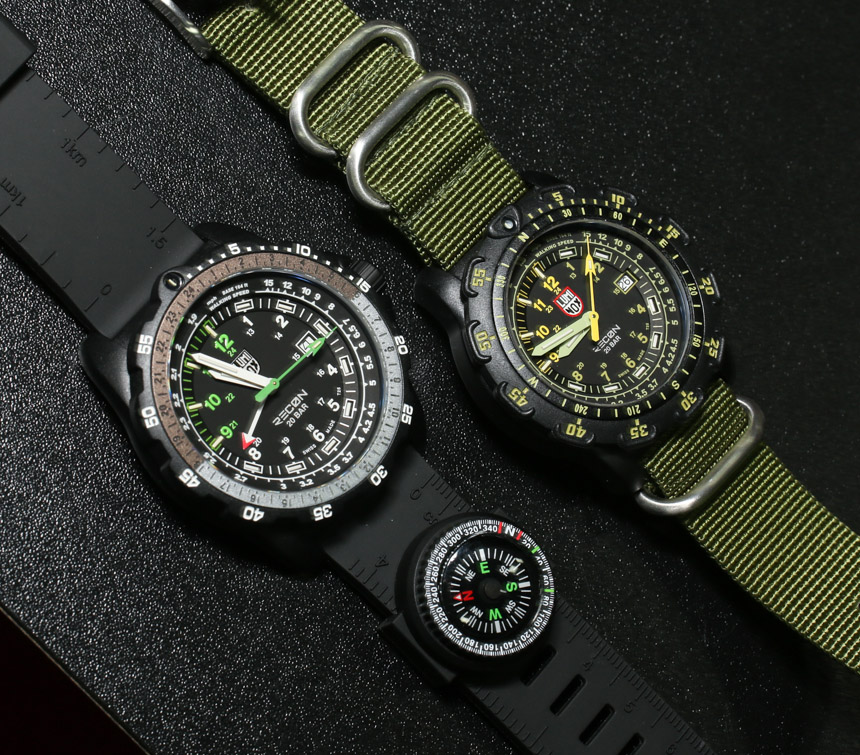 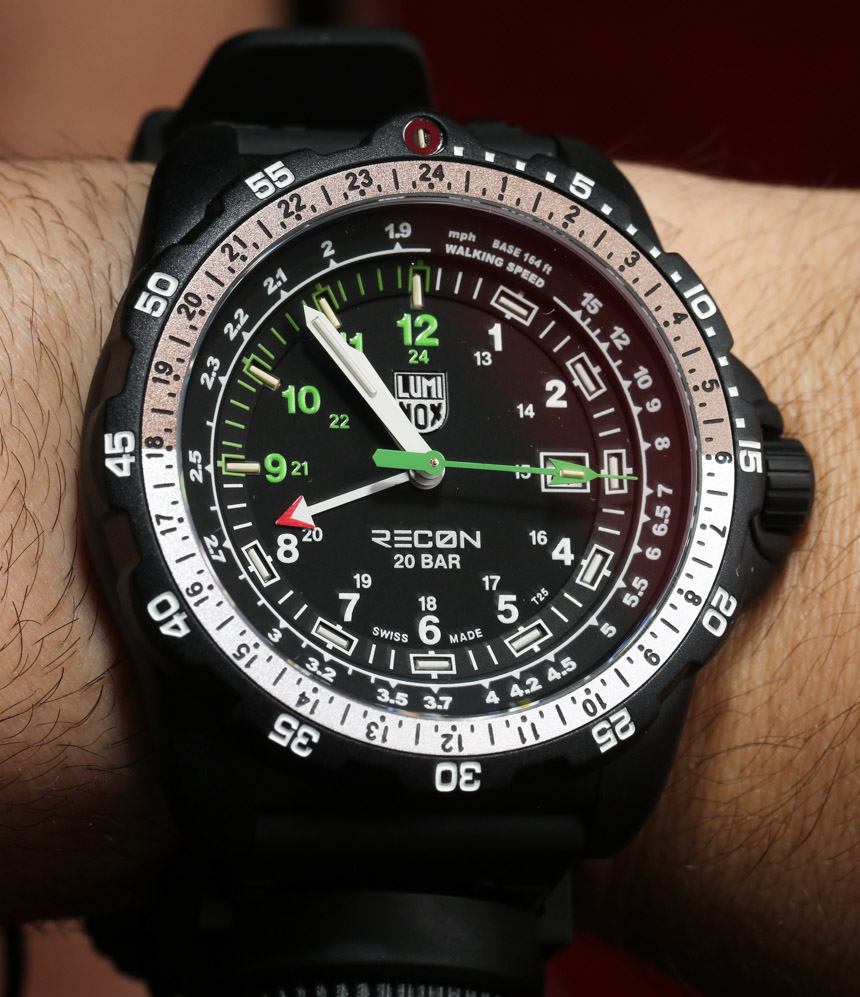 What you see here are two newer watches in the Luminox Recon collection, as part of their “land” family of timepieces. The Recon series watches are designed around the idea of offering special features for members of a tactical reconnaissance team. New for 2013 is the Recon NAV SPC (we debuted it here), which offers a few differences on the existing Recon Point Man. Each is a cool watch, and our favorite part is the actually (somewhat) useful tachymeter.

A lot of sport chronograph watches have tachymeter scales somewhere on the watch. These are used to measure the speed of items you see moving when you can determine the time it has taken to travel (usually) a kilometer. In real life they are rarely useful. The Recon Point Man and NAV SPC (which by the way stands for “navigation specialist”) have “walking speed tachymeters.” That’s right, these can be used to determine how fast you are walking. Why is that useful? In most instances it is not useful at all. But imagine you are out in the field, either alone or with a squad and want to know how long it will take you to get to a specific location. Perhaps you know it is five miles away, but you need to know approximately when you’ll get there. 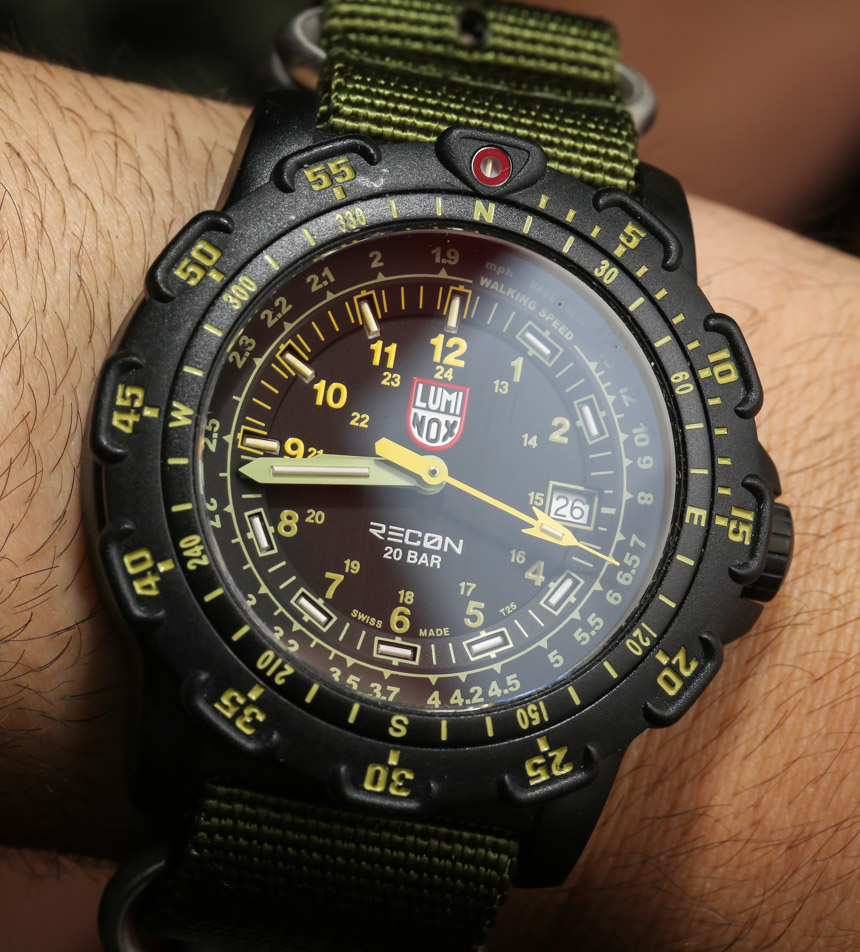 So what you’d do with one of the Recon watches is wait until the seconds hand reaches zero, and then once it gets there, measure how long it takes (in this case) for you to walk 164 feet. You can always estimate it by walking with one foot right in front of the other. When you’ve traveled 164 feet, you look to see where the seconds hand is pointing on the walking speed tachymeter scale.  Note that Luminox has considered the ‘world market’ so there are two versions of each watch – one based on miles and another based on kilometers. These are differentiated by an “MI” or KM” at the end of the watch’s reference number. Again, it isn’t the most precise system, but it gives you a rough idea if you have no other instrumentation. The bottom line is that it is arguably useful. As is the ruler scale on the Recon NAV SPC’s polyurethane strap. Maybe good for measuring stuff on a map? Basically this is trying to be a bit like a Swiss Army knife watch, which of course doesn’t have any relation to the actual Swiss Army brand of watches (that to my knowledge, don’t have straps with rulers on them).

Other features include a rotating bezel with both a 60 minute counter and navigational ring (on the Recon Point Man), and 24 hour scale on the Recon NAV SPC. Actually you also have the navigational features on the Recon NAV SPC, but on the little strap-attached compass instead. I love these, and we’ve seen them on watches in the past. Breitling even makes fancy digital ones that they call the “Co-Pilot.” Here you have a simple magnetic compass with rotating navigational ring. In a sense it is very retro cool, and we all dig it. You can remove the compass as it can be slid on and off the strap. These come standard on all Luminox Recon NAV SPC watches. 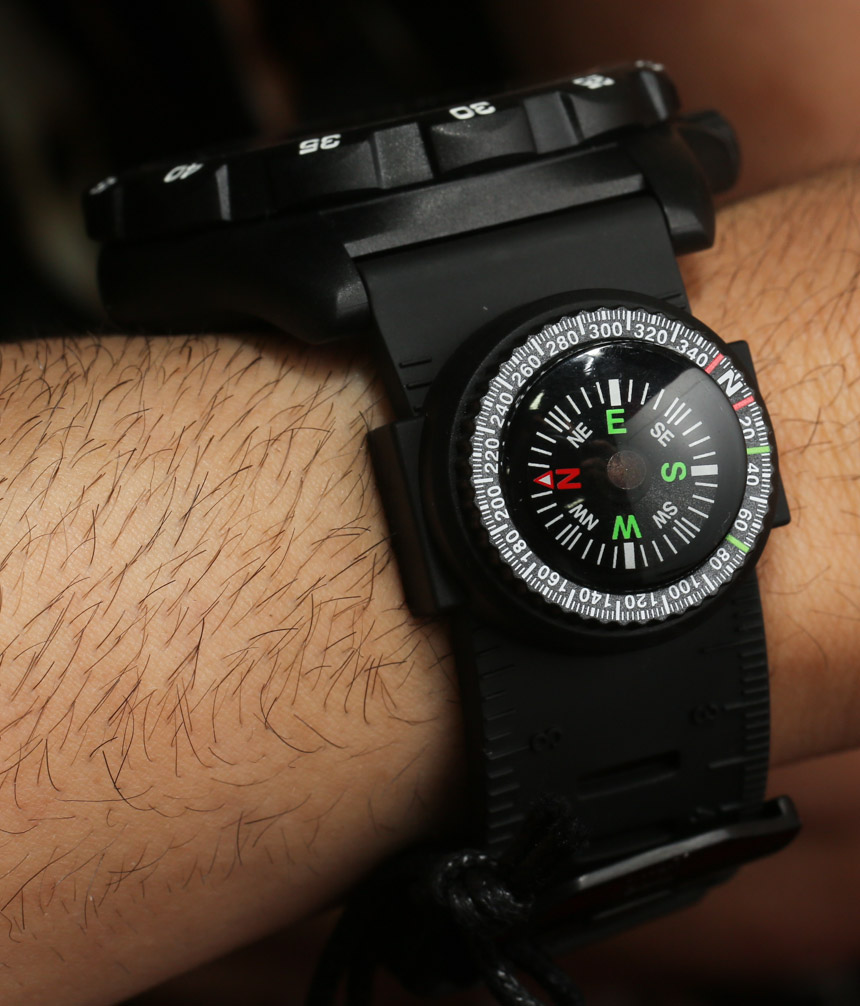