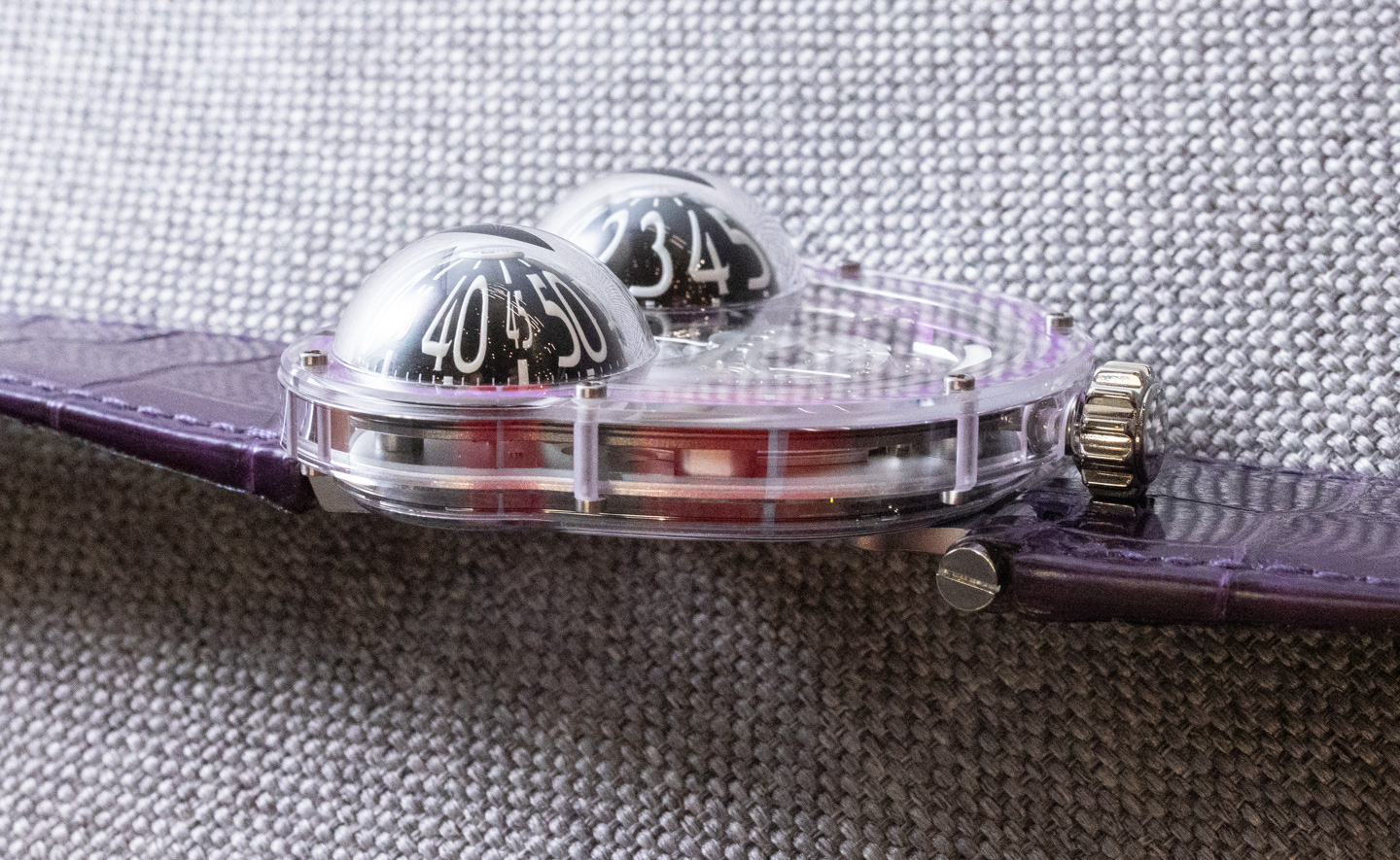 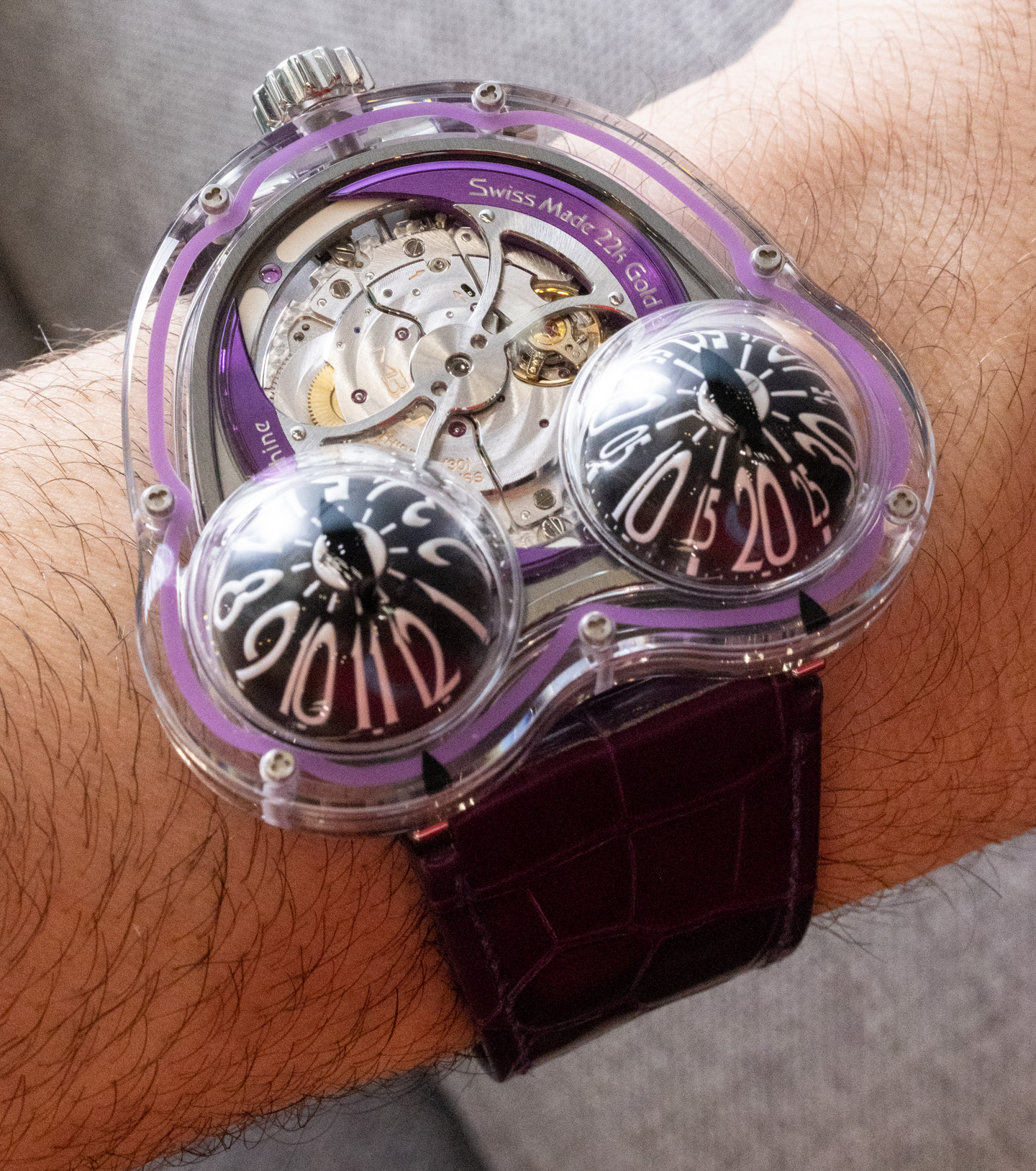 In 2020, Geneva-based MB&F originally debuted the 10th anniversary HM3 FrogX (Frog X) watch on aBlogtoWatch here. It recalled the release of the original MB&F HM3 Frog back in 2010 (which was a very good year for MB&F watches) with a new limited-edition set of just 30 watches (10 pieces each across three different colorways) that redid the HM3 Frog watch with a mostly sapphire crystal case. I recently got a chance to go hands-on with one of these exotic treats in the form of the purple-accented MB&F HM3 Frog X watch.

The Horological Machine No. 3 was the third major watch release from MB&F that originally came out in 2008. In 2010, I did a review of the MB&F HM3 watch here. The HM3 came in a few styles and was one of the first series of watches that MB&F produced in any real volume. Max Busser at the time also pointed out that collectors felt the HM3 was the first watch where MB&F really start to hit a stride and connect with very high-end luxury watch enthusiasts who wanted something traditionally produced but highly avant-garde in style. 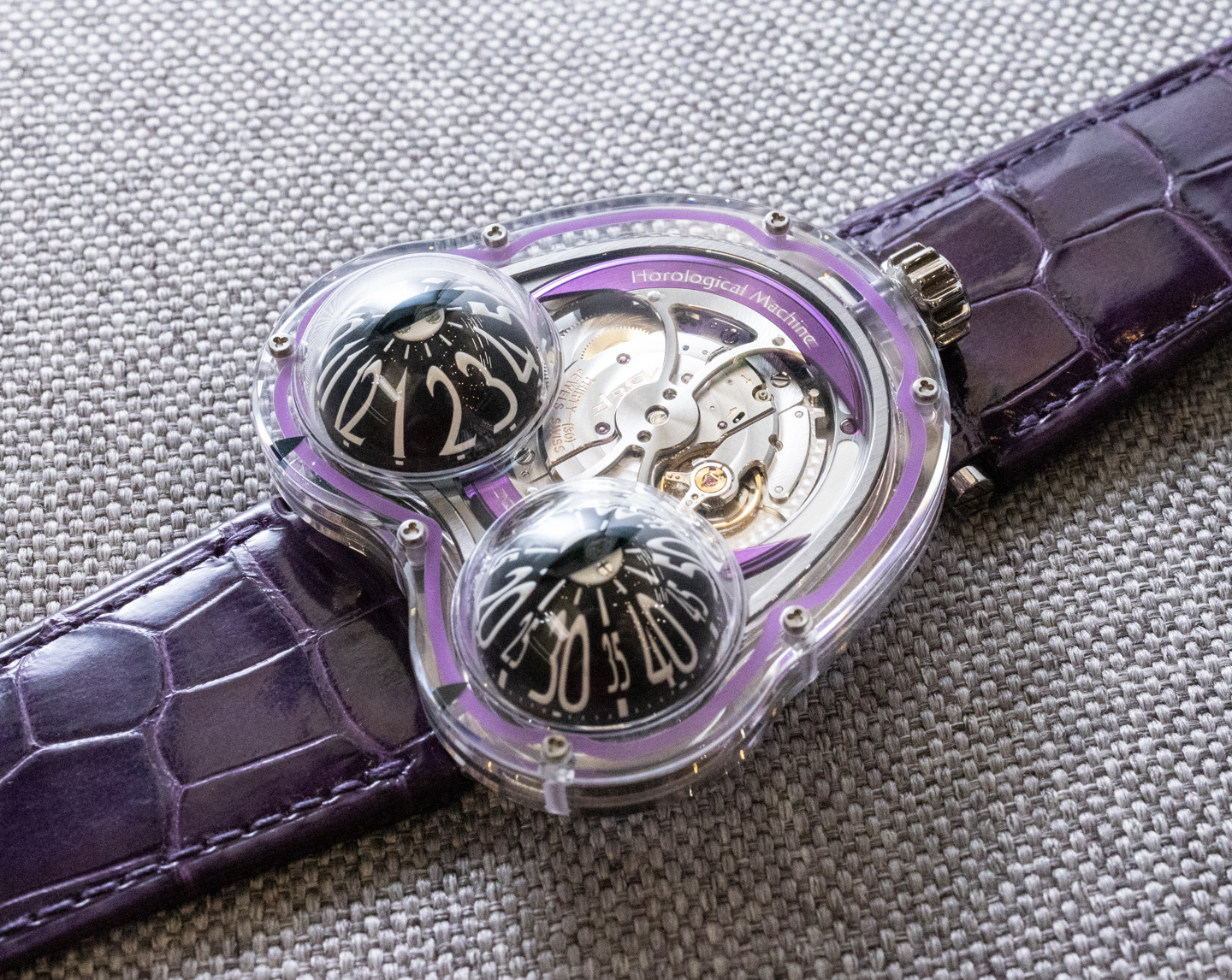 When HM3 Frog was released in 2010, two years after the original debut of the HM3, the new style of time indicating domes was here to stay. The more cone-shaped turning hour and minute indicator drums used in the original HM3 Sidewinder and Starcruiser were replaced by rounded domes in black with white markers. Arrows printed on the sapphire crystal domes over the indicators were how the user would know where to read the time. Given the resemblance of the domes to amphibian eyes, this new generation of HM3 watch was called the HM3 Frog, and it remains to this day one of the most successful MB&F watches ever. The company ceased production on the HM3 some years back to focus on other models, but in 2020, the 30-piece limited-edition set sought out to do something I think MB&F really wanted to do a decade ago, which was create an HM3 Frog case out of sapphire crystal. You might recall the 2011 MB&F HM2 Sapphire Vision here, which offers a flat-top piece cut out of sapphire crystal as the very last pieces of the Horological Machine No. 2. Later, in 2016, MB&F released the Horological Machine No. 6 Sapphire Vision watch (aBlogtoWatch hands-on here) that finally started to offer larger pieces of sapphire crystal case material rendered in complicated, curved shapes. Now, the “sapphire vision treatment” (without that name) has been given to the HM3 Frog for that very limited FrogX. How does the MB&F HM3 Frog measure up, now 12 years after its initial debut?

Let’s first discuss the technical specs of this watch. Aside from the new mostly sapphire crystal case construction and hip colors, the MB&F HM3 FrogX is very much like the original. The automatic movement is based on a Girard-Perregaux running train and operates at 4Hz with about two days of power reserve. Built around the base Girard-Perregaux movement is a system developed for MB&F by also Geneva-based Agenhor, which uses the two spinning aluminum domes to indicator the hours and minutes separately. Previous versions of the movement indicated the date as well, but here with the Frog, we simply have a large view of the “battleax-style” automatic rotor in 22k-gold (here toned purple) near the turning “eye” domes on the top side of the watch. 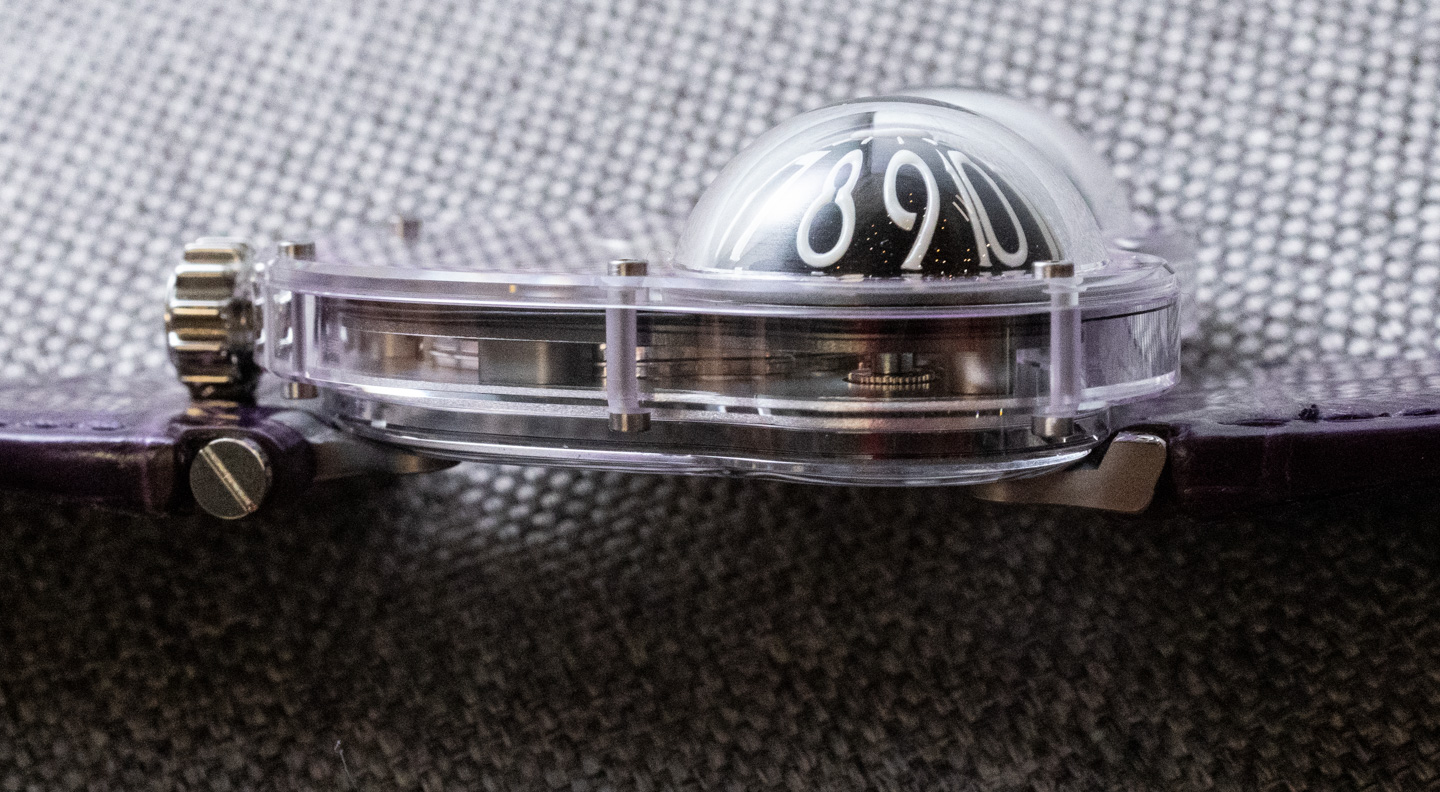 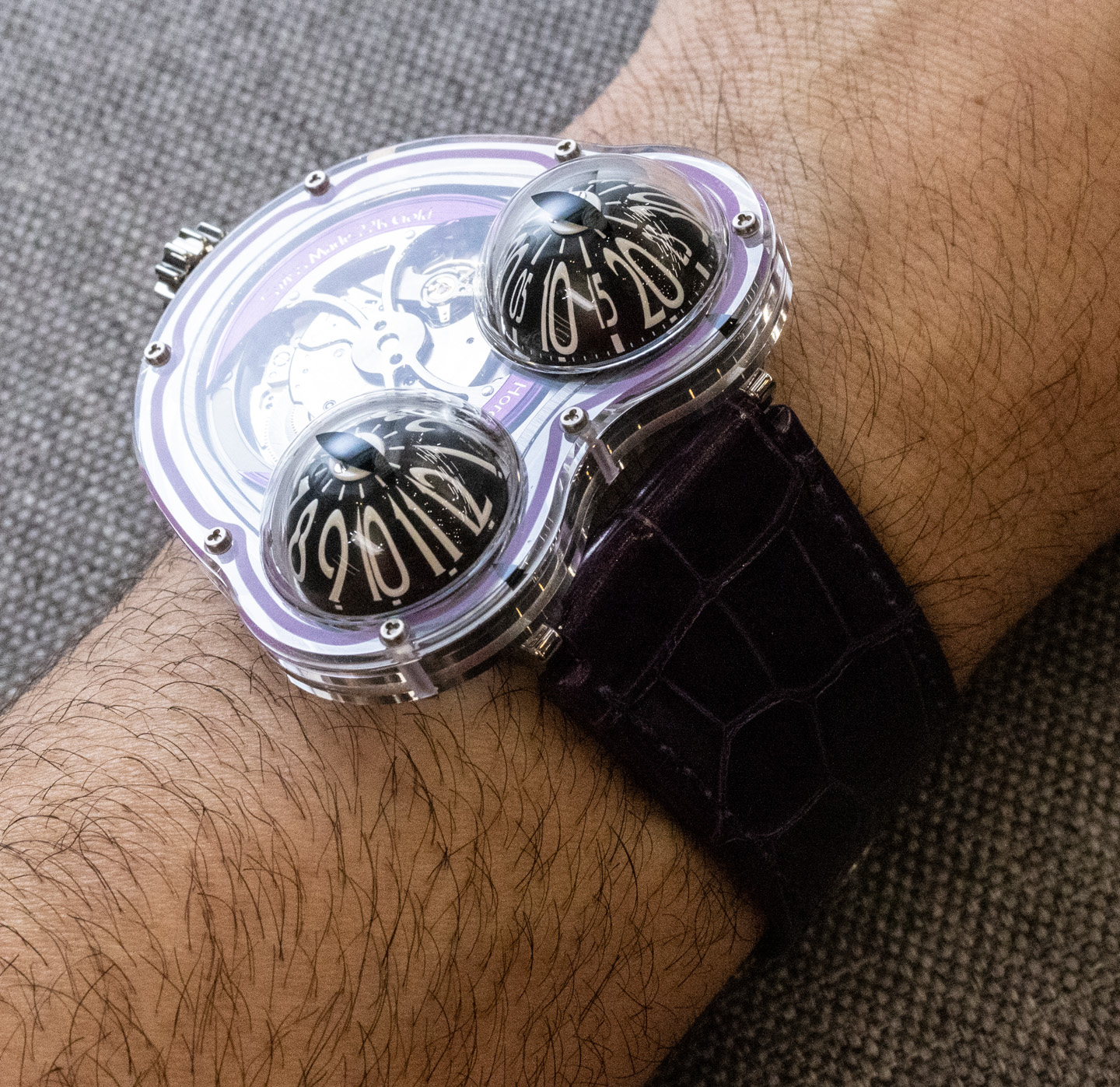 The watch itself is rather comfortable on the wrist despite its strange shape and dimensions. The case is 47mm-wide, 50mm lug-to-lug, and 18mm-thick. In addition to the mostly sapphire crystal case, the watch uses what I believe are titanium screws, along with colorful gaskets (here in a matching purple color), which are necessary for water resistance but also offer an aesthetic element to the overall composition. To complete the purple theme, the watch comes on a very attractive purple-colored custom alligator strap. The late musician Prince (um… the late musician formerly known as Prince) probably would have been very keen to match this watch with some purple velour.

Other versions of the MB&F HM3 Frog X include a model in blue with a matching blue strap, as well as a model with a white strap and turquoise-color automatic rotor accents and case gasket. There is one final “secret” detail that these watches have in the form of a special engraving on the crown. This concept has been mostly used on jewelry, but MB&F found a way of putting it into a watch in the form of a small engraving on the crown. Most other MB&F crowns have the brand’s battleax logo in relief. Here, however, there is a “secret” (meaning it is hard to see with the naked eye) engraving of the battleax logo that only appears when reflected off the crown after it is hit with direct light. In essence, if the light is bounced on the surface of the crown where the secret engraving is, the shape of the logo reflects on your wrist or whatever other surface is around with the image. The concept is fun, simple, and requires a visual demonstration for most people to understand. Even MB&F doesn’t have an official image of this effect and I didn’t have the time to set up a photography shot that allows you to see it. Just trust me that the “secret logo reflection Easter egg” is part of the HM3 FrogX concept. 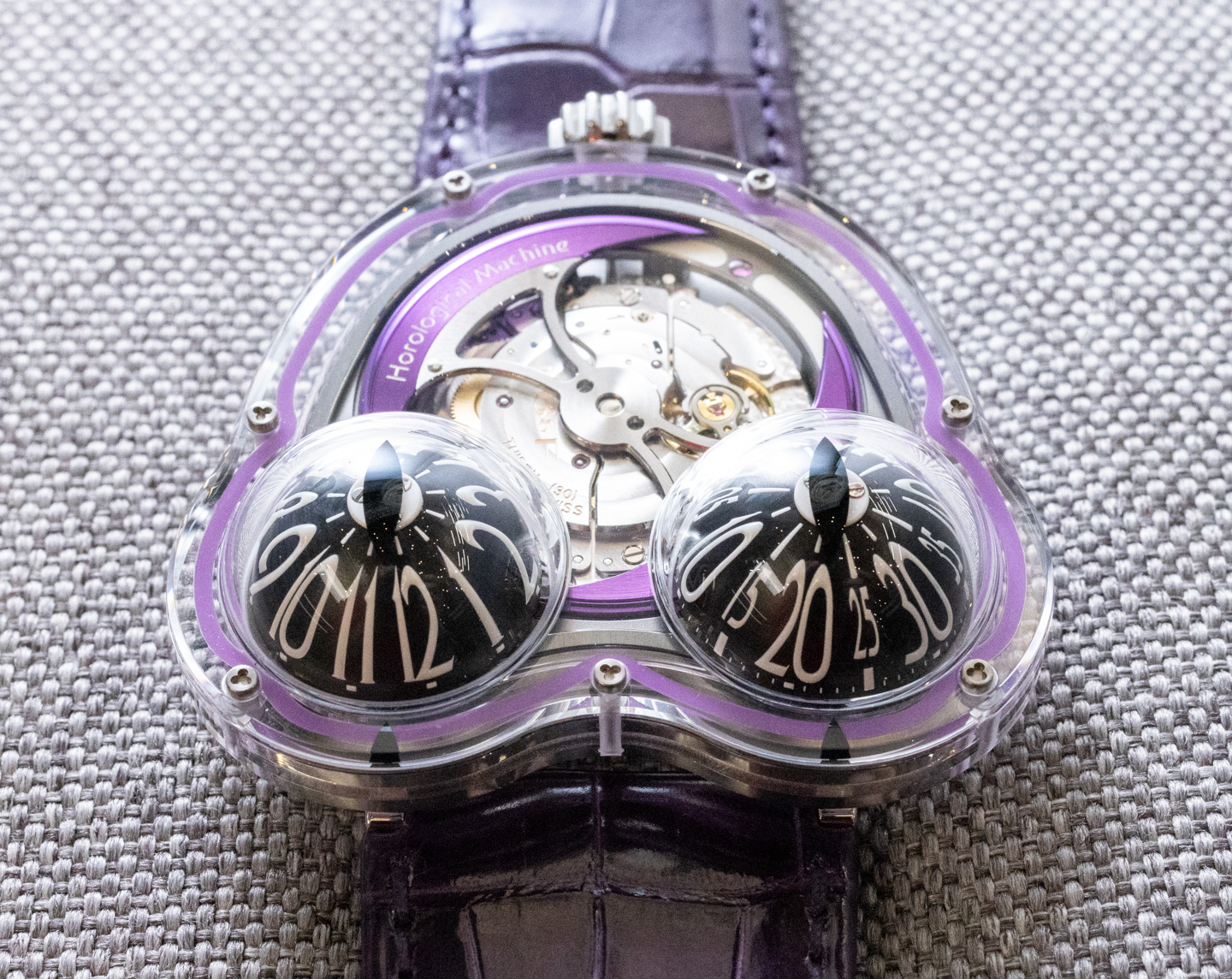 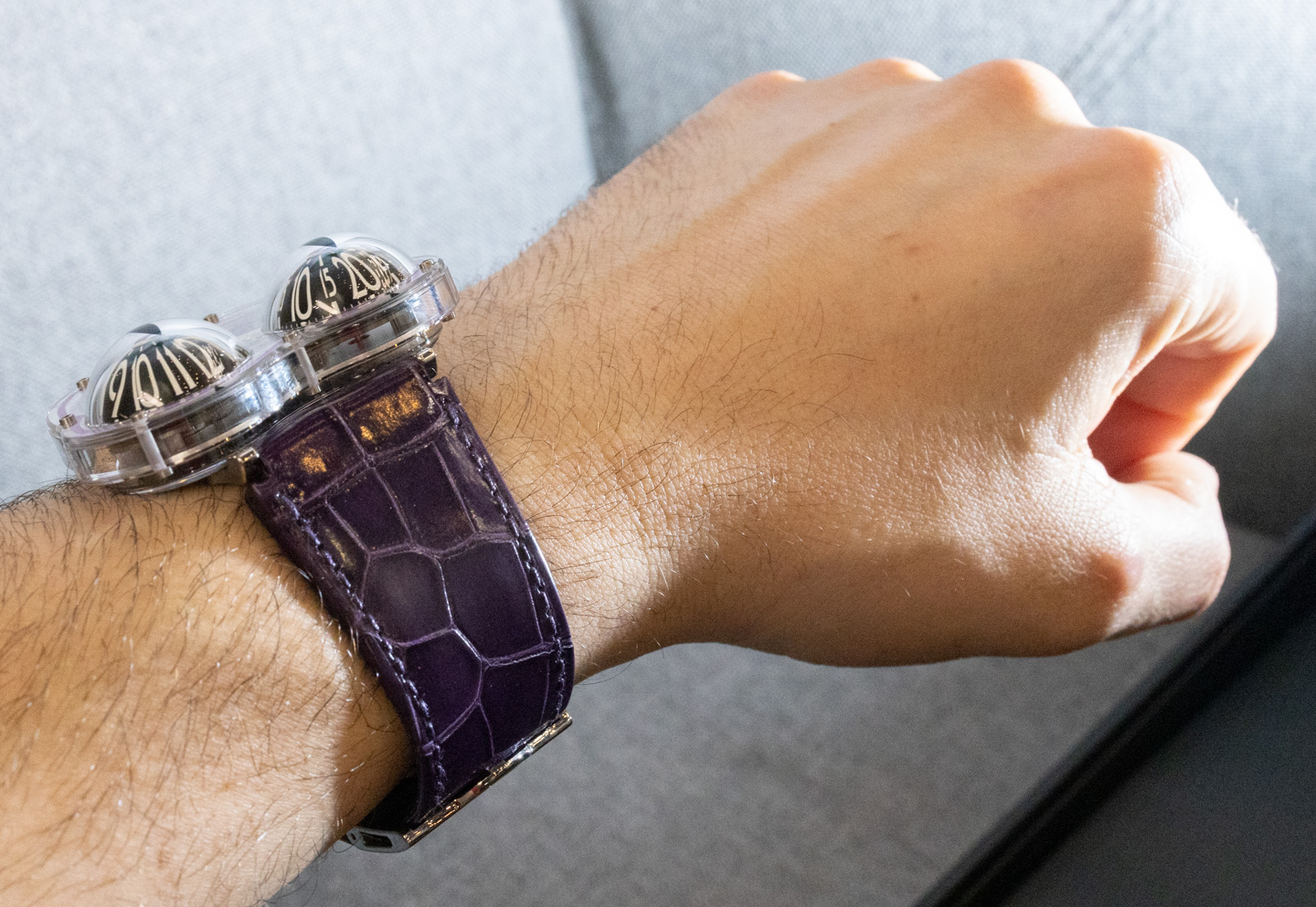 Prices have changed rather remarkably in the last decade or so. Even though the original MB&F HM3 Frog was an expensive watch at around $80,000 USD, the 2020 MB&F FrogX costs nearly double that. Indeed, the sapphire crystal case and inflation account for a big part of that, but it is also interesting from an analytical perspective to track how the prices of even similar luxury watches change over time. It still offers an incredible (and fun) wearing experience, with not much else out there like it on the market. Price for each of the 30 limited-edition (across three colors) MB&F HM3 FrogX (Frog X) watches is $152,000 USD. Learn more at the MB&F watches website here.