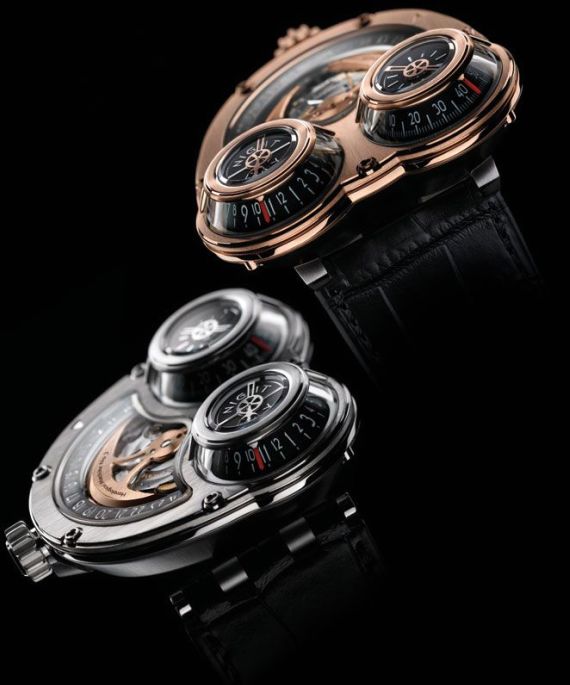 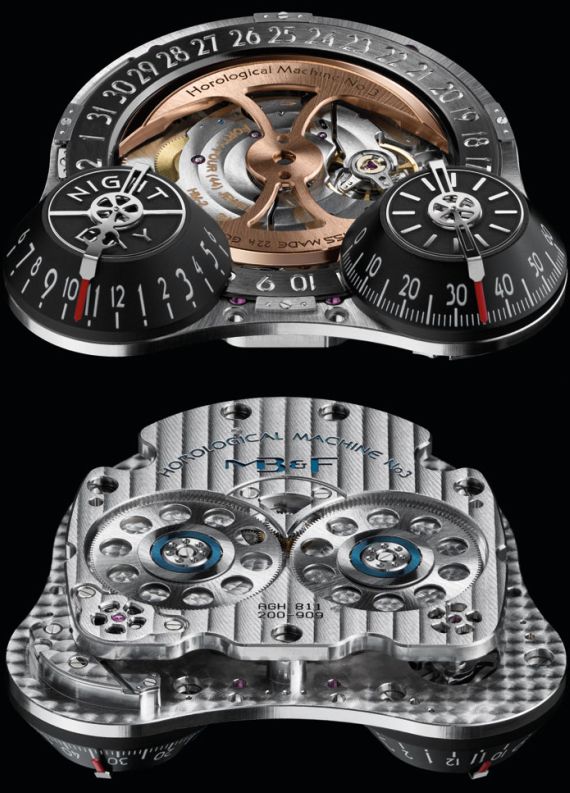 Where have I seen this look before? MB&F founder Max Busser doesn’t hide the fact that he is inspired by science fiction and related culture in the creation of his timepiece novelties. The new MB&F No. 3 reminds me of a place between Star Wars’ C3PO, “Batteries Not Included’s” Wheem babybot, and Futurama’s Bender. Compare the images, and I think you’ll agree. Besides those references, there are plenty of other tech culture influences that went into the design of the No. 3 Sidewinder and Starcruiser. 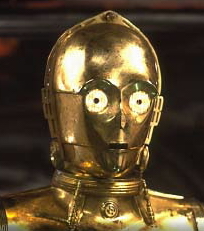 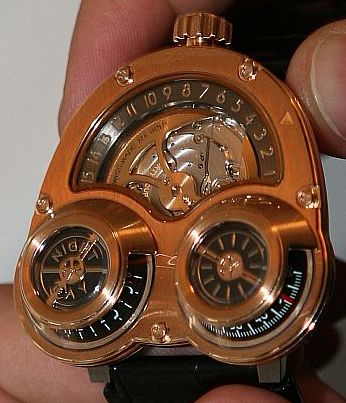 The difference between the two watches is orientation. Not THAT kind of orientation (anyone can wear them), but literally the way they are positioned. The Starcruiser is in a more vertical position with the crown pointed up, while the Sidewinder is turned on its side, with the dials stacked on each other and the crown pointed in toward your arm (assuming you are wearing the watch on your left wrist). Reading the time is based on looking at two conical gauges. One features the hours, while another features the minutes. Looking down at the hour cone you see a day/night indicator as the entire rotation of the hand takes 24 hours to make a full revolution. The adjacent cones features the minutes which can be read either on the side of the cone or looking from above. The watch doesn’t have a dedicated seconds display, but really, is that what you are thinking about right now? You’ll further appreciate knowing that the cones are made of solid pieces of sapphire crystal, which in case you were wondering is very hard to manufacture in these shapes. 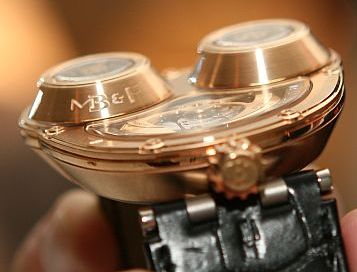 The No. 3 has an interesting date display. Most of the disk is exposed, and an arrow to the right of the disk indicates what the date is. MB&F makes a big to do about how this has “never been done” before. Watch makers love this phrase. The date display is nice… nothing to have a press release about, but the high quality nature of the disc makes it interesting to look at. What is cool however, is the rotor for the automatic movement being exposed through the front of the watch in the middle of the date disc. Done in gold, and shaped like a boobie trap axe, the rotor reminds you that this is no watch you are looking at, but rather, an “Horological Machine.” This is luxury marketing at its best (‘wink wink’).

In my opinion, this third Horological Machine iteration is the most cohesive design of the MB&F bunch. While each of their previous models was infinitely impressive, I was always just short of really being moved by the design. The No. 3 takes the theme to a new level for me, and the cultural icons that the watch reminds me of really make it something worth lusting for if I am ever in the position to blow six figures on any given weekend.

The watch case is red gold and titanium (the bottom) on the Starcruiser, and white gold and titanium on the Sidewinder. The rotor itself is 22k gold and plays a little visual trick. All rotors must weighted at one end so that they oscillate to wind the watch. The rotor in the HM3 (horological machine 3) looks to be symmetrical, so where is the extra weight? Simple, it is underneath the rotor, nothing too crazy, though MB&F loves to call it a mystery rotor, what an horological enigma! 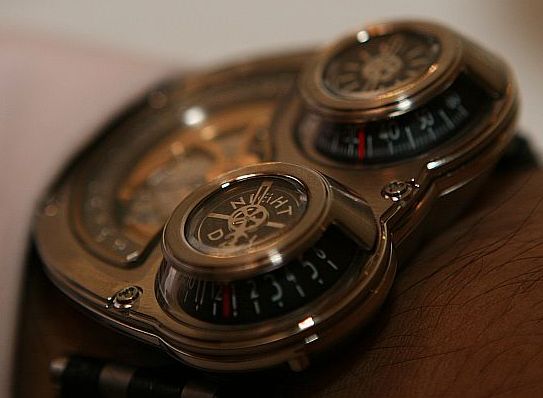 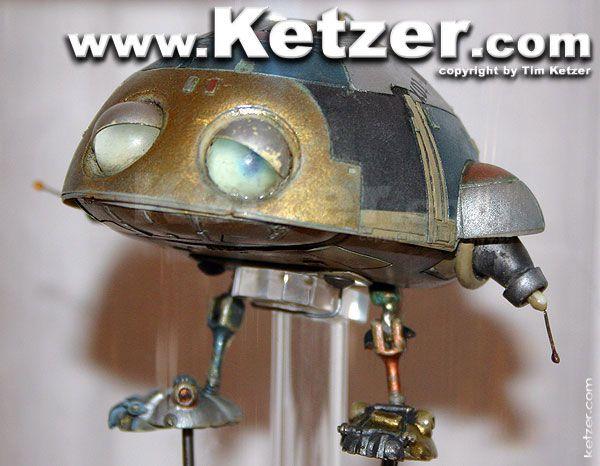 The crown is wonderfully large. It needs to be when you call this a machine. Place attention on its operating point. There is not much going on, on the rear of the watch, save for two symmetrical gears. These likely spin in tandem when you manually wind the watch. The hardest part of a movement such as in the HM3 is creating the symmetry and making it look so nice. There is nothing too inherently complicated about the MB&F No. 3 in watch terms. You can get the same functions in mechanical watch for a few hundred bucks. What is special, is the orientation of the gears and elements that make up the movement and the watch itself. 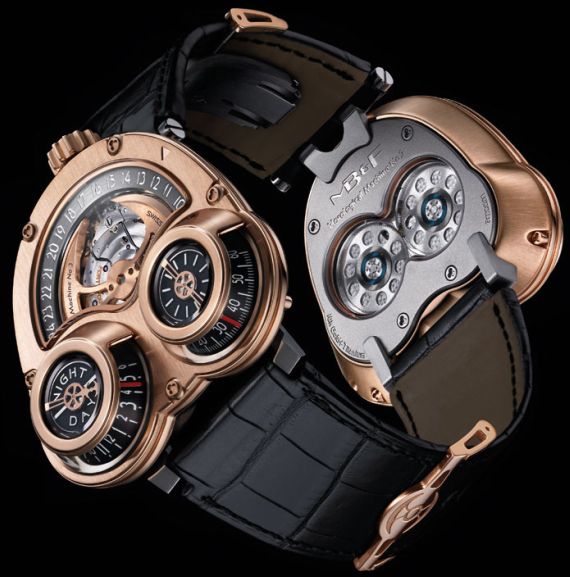 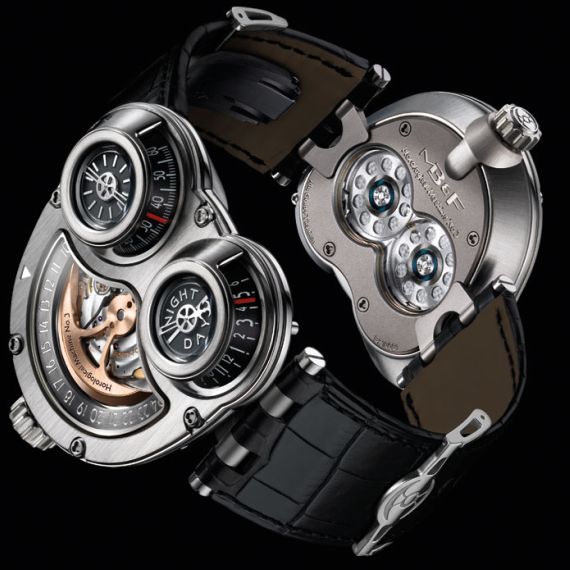 This is not a watch I would call beautiful, but the steampunk goggle appearance of the time telling semi-cones is endearing. It is a sympathetic machine, and depending on its orientation, it looks to be smiling or demurely cute with the cones serving as eyes. Add the exposed screws and polished metal, and you have a thematic masterpiece that for once, combines science fiction, steampunk, and anthropomorphism; in a watch.

You can also appreciate the black hand stitched alligator strap with the fold over clasp (also gold an titanium) adoring the logo of the rotor design. It is kind of MB&F’s icon, this rotor design. Look at the three prong connection to the lugs where the strap attaches to the case. It is a nice look, and the large sized screws work well on the side. The strap is really wide, but it needs to be so that the 47mm wide by 50mm high case of the HM3 doesn’t look too gargantuan.