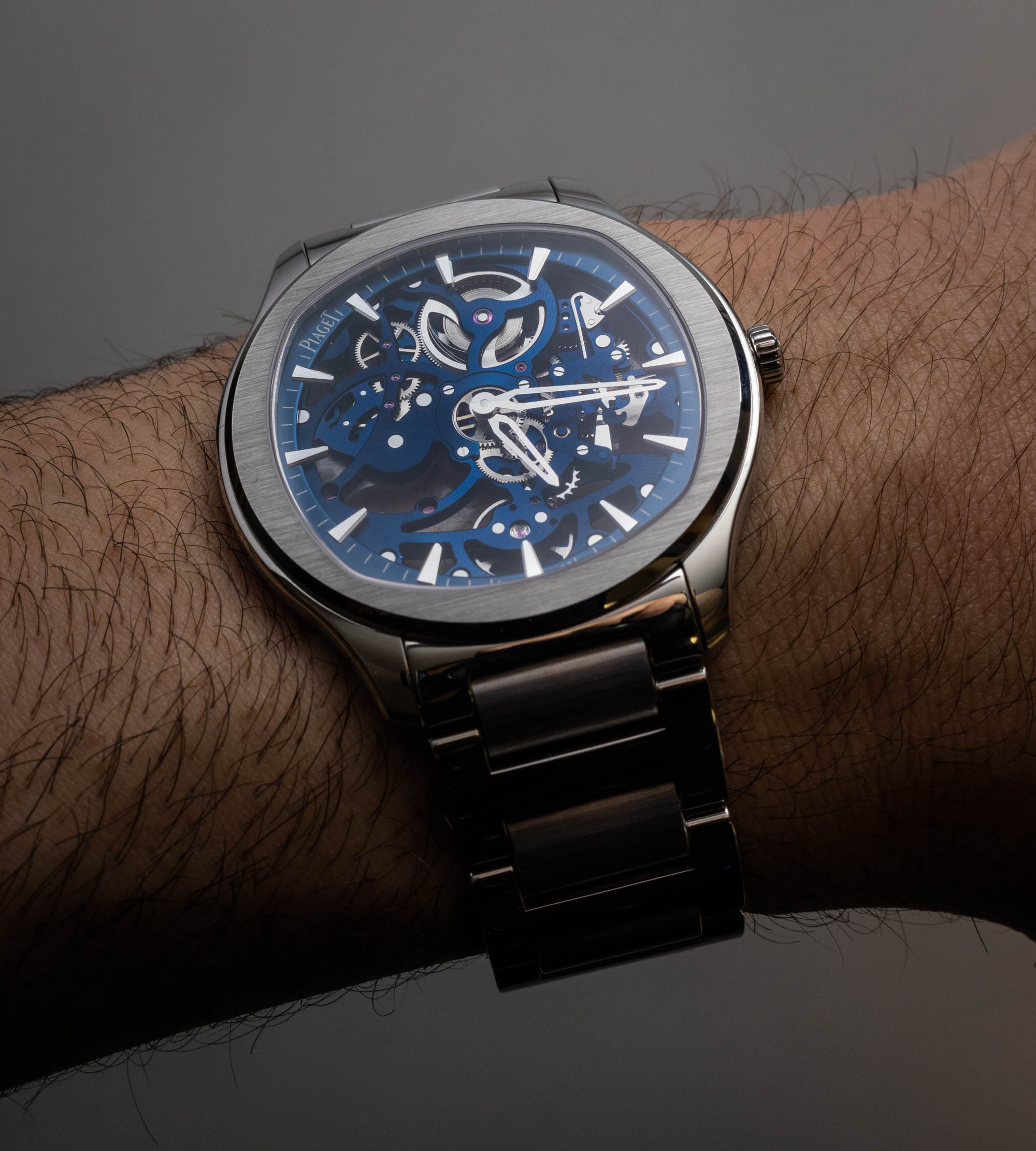 The Piaget Polo is one of those models that seems like it was always destined to be a bit of an underdog within the industry. As the lone sports watch from a brand that is equally known for its timepieces as it is its high jewelry, the Polo gets immediately overlooked by some collectors simply because they don’t normally think of Piaget as a brand that makes sports watches, while others instantly write the model off because they feel that its design is a bit too close to other watches within the industry. Additionally, when you consider that the model most frequently compared to the Piaget Polo (at least from an aesthetic standpoint) is the Patek Philippe Aquanaut, it becomes clear that the Polo was more-or-less destined to always have an uphill battle when it comes to gaining mainstream attention. 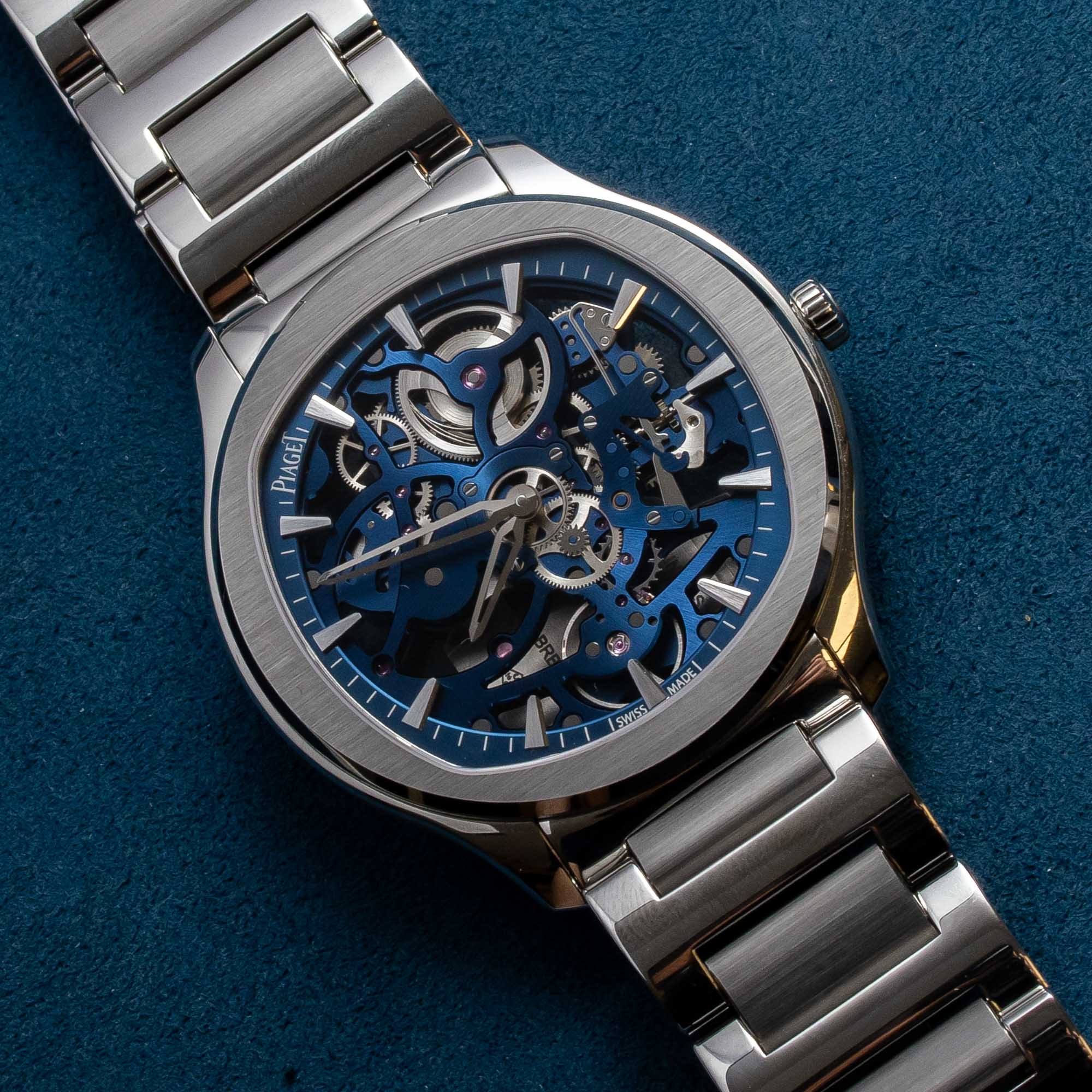 Personally, I think some of the most successful Piaget Polo models have been the ones that incorporate Piaget’s own signature design ethos, rather than those that aim to be more like a traditional sports watch. It’s not that I don’t want to see Piaget make sports watches; I just prefer when the end result is something that feels like it is tied to Piaget’s greater catalog, rather than something that could have just as easily been produced by a completely different brand. Therefore, some of my favorite Piaget Polo models have been the skeletonized versions, which feature the Polo’s defining case shape in an ultra-thin, open-worked package that offers an overall appearance that is distinctly different from what you get with something like an Aquanaut. While a green version of the Piaget Polo Skeleton watch was unveiled just about a month ago in July 2022, my favorite version is still the blue one that brings to life Piaget’s skeletonized design in the brand’s own company color. 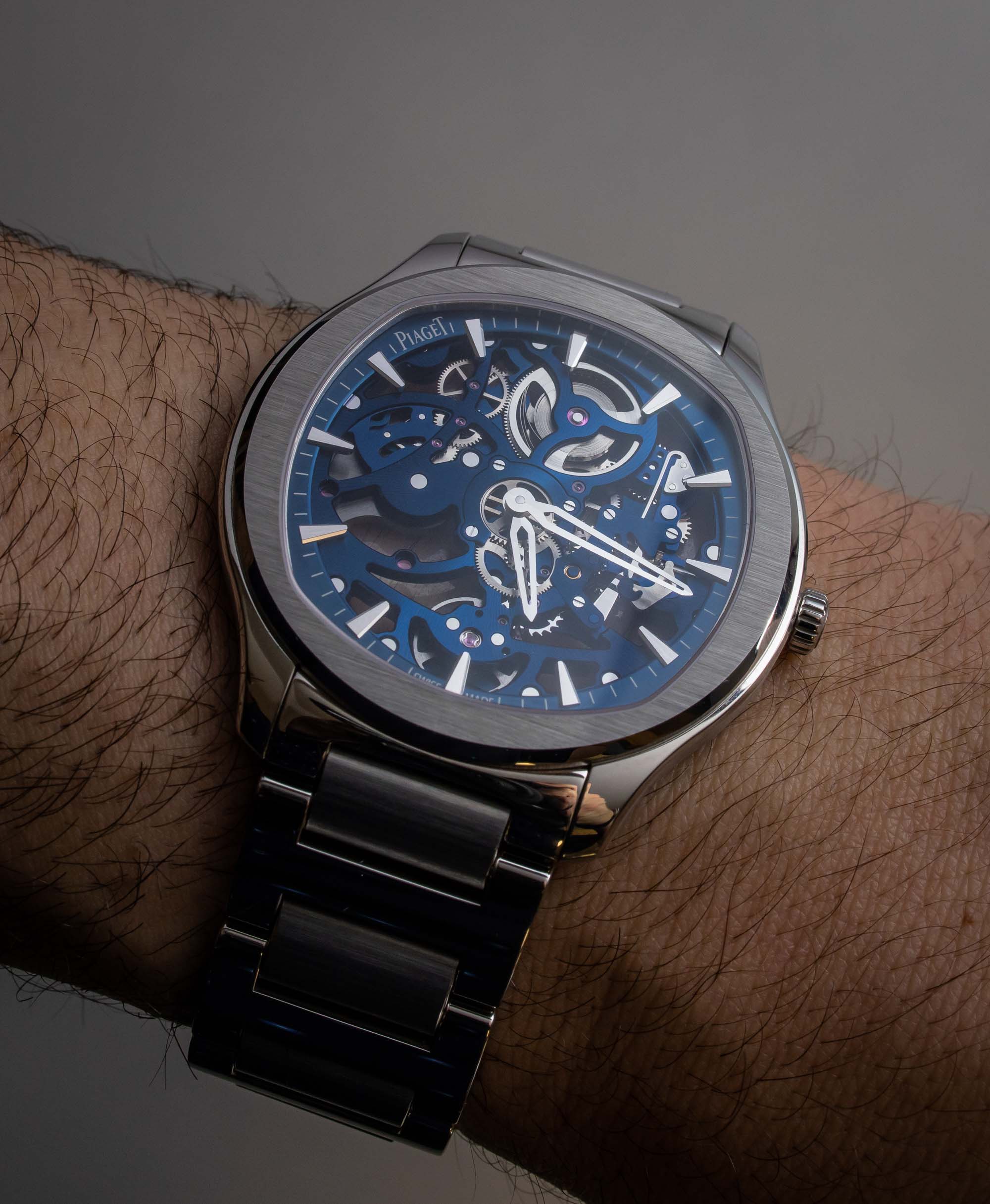 Crafted from stainless steel, the case of the Piaget Polo Skeleton measures 42mm in diameter, yet it comes in at just 6.5mm-thick, which strikes a balance of being noticeably thin, without feeling delicate or fragile on the wrist. Sapphire crystals sit both above the dial and are mounted within a screw-on caseback, while a small signed winding crown located on the side of the case at 3 o’clock offers access to the movement. Despite being part of Piaget’s Polo line of sports watches, water resistance for the Skeletonized models is a minimal 30 meters. Admittedly, when executed by a quality manufacturer and fitted with a fresh set of gaskets, a 30-meter depth rating can actually offer a surprising amount of protection. However, it would have still been nice to see a bit more than what many would consider “splash resistance” on a model from the brand’s dedicated line of sports watches. 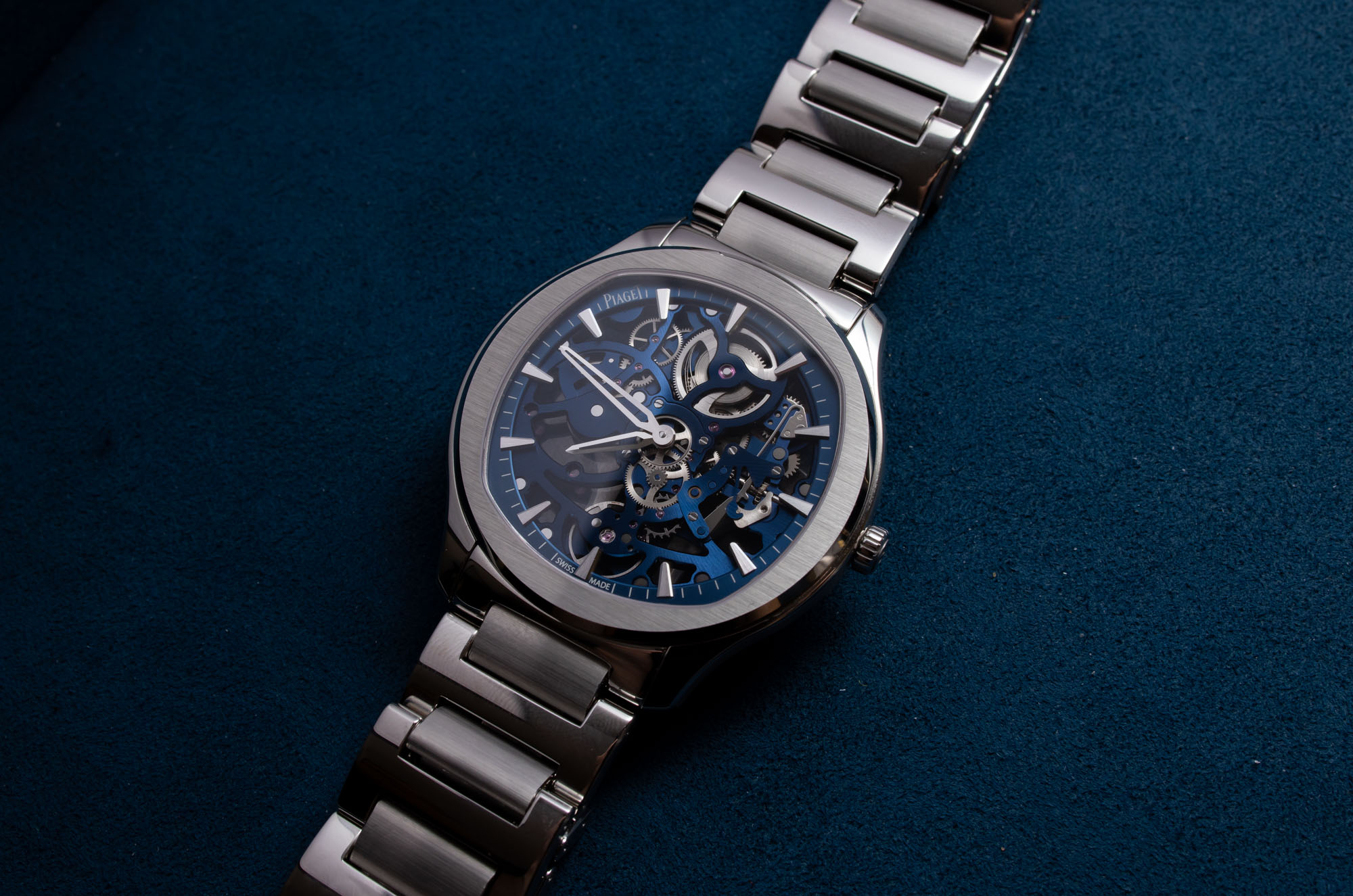 The blue skeletonized dial that sits center stage in this version of the Piaget Polo Skeleton isn’t actually a dial at all, but rather the blue hue that is visible comes from the actual color of the mainplate and bridges of the movement. The faceted hour markers are attached to a matching blue ring that contains a minute tack and surrounds the perimeter of the dial, while a skeletonized pair of centrally-mounted hands indicates the time. Functionality is limited to just the hour and minutes on the Piaget Polo Skeleton models, and the components of the movement have been cut away in a manner that maximizes the amount of open space. Due to the degree of open-working present on the Polo Skeleton, the Piaget dial signature appears all the way up in the far left-hand corner of the dial, while the brand’s name also appears on the reverse side of the micro-rotor oscillating weight, and is visible through the dial side of the movement as it rotates and winds the watch. 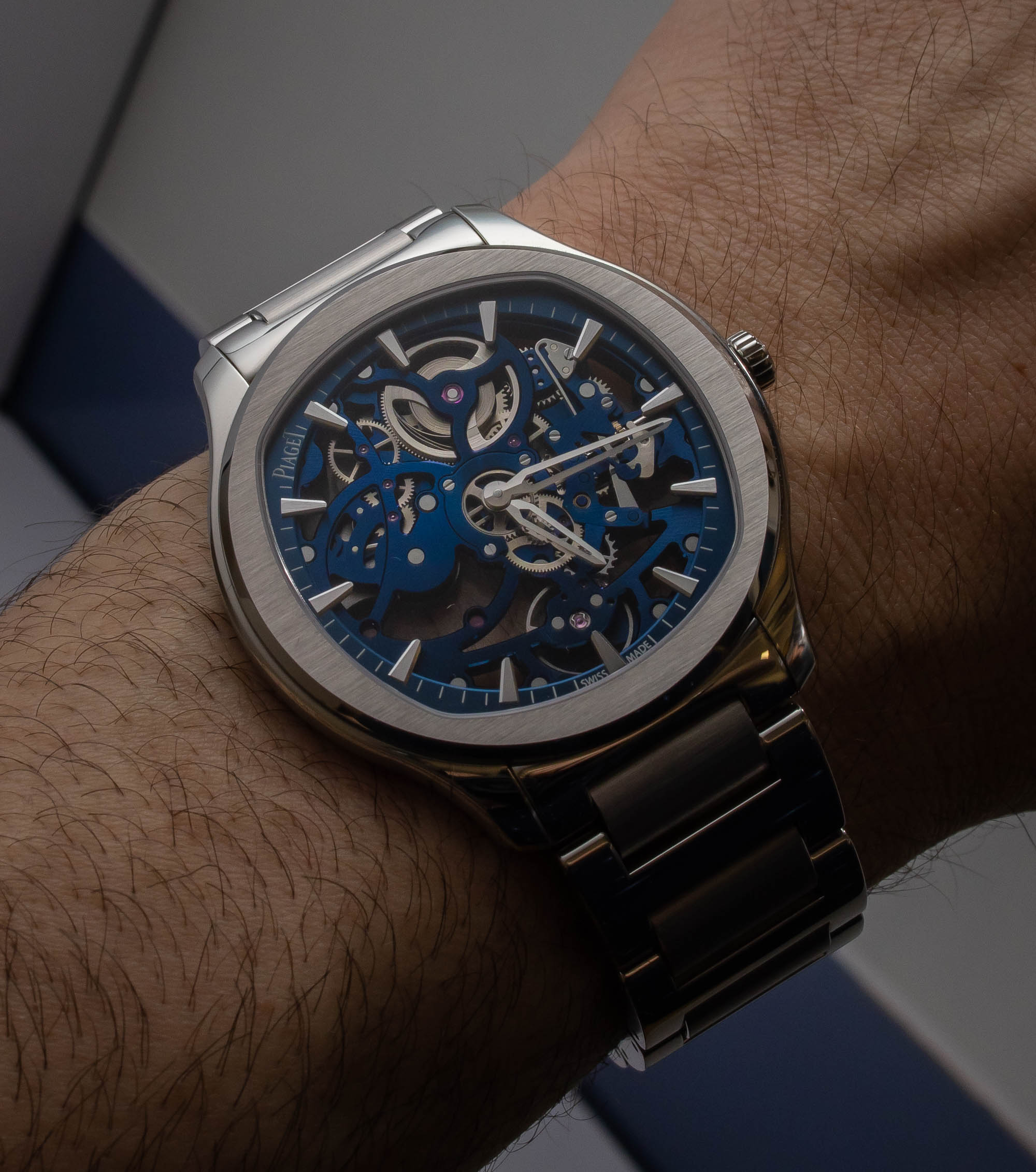 Despite their different color finishing, all of the various Piaget Polo Skeleton models are powered by the same in-house Caliber 1200S1 automatic movement with a highly open-worked design that includes a transverse bridge for the balance wheel and an innovative micro-rotor layout. the striking blue mainplate is finished with a sunburst satin-brushed finish, and while the movement is technologically quite impressive from a design standpoint due to its rotor design and skeletonization, it’s important to remember that functionality is limited to just the hours and minutes of the day, as the Piaget Polo Skeleton is a time-only watch at its core. Running at a frequency of 21,600vph with an approximate power reserve of 44 hours, the Piaget Cal. 1200S1’s goal is all about creating open spaces to contrast against its bright blue bridges, and the mainspring barrel is even skeletonized, which enables you to see the coil of the spring itself through the cutouts in the upper half of the dial of the watch. 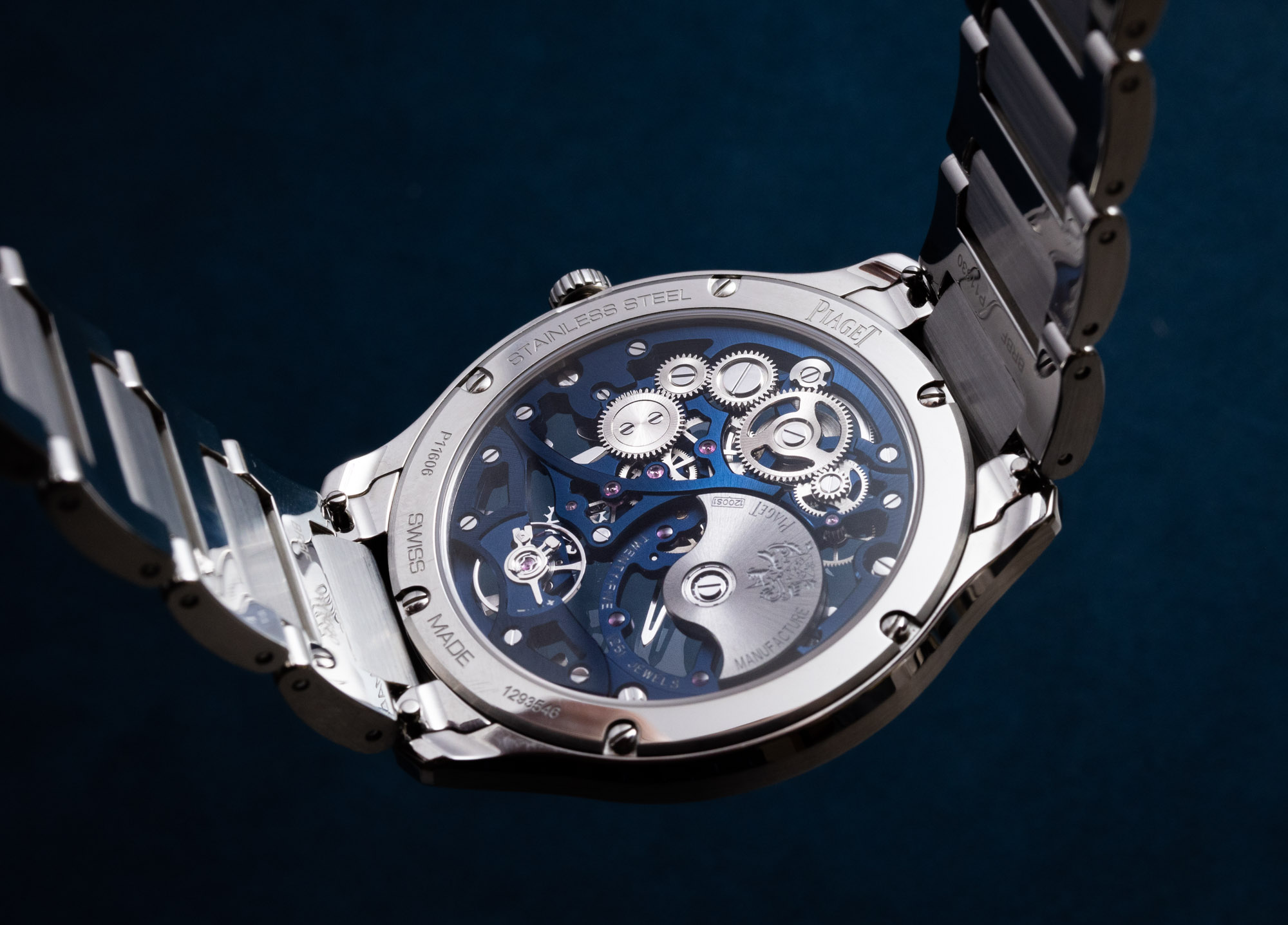 All of the different colors of the Piaget Polo Skeleton watch come standard on a matching stainless steel H-link bracelet that is fitted with a double push-button, butterfly-style clasp. With that in mind, each one also comes with an extra alligator leather strap that is color coordinated to match the dial. Both the leather strap and the metal bracelet feature quick-release pins at the lugs to allow you to quickly swap between options, and it is clear that Piaget intends for owners of its Polo Skeleton watches to enjoy both on a regular basis. Given the slightly limited aesthetic versatility of blue alligator leather, I imagine that most owners will opt to wear the stainless steel bracelet on their watch the majority of the time. However, the simple fact that the leather strap is included means that buyers don’t need to decide between the two options when purchasing the Polo Skeleton at retail, nor will they have to double down on their purchase and buy the strap as an additional add-on item from their retailer or boutique.

While its overall case shape and large bezel with brushed surfaces are definitely reminiscent of a few other well-known watches within the industry, the blue Piaget Polo Skeleton feels like a timepiece that is true to the brand that created it. When I think of Piaget as a watchmaking company, I often think of ultra-thin timepieces with refined designs, and this Polo Skeleton watch delivers upon those expectations, despite having an overall aesthetic that is significantly more sporty than what you will find within the rest of the brand’s catalog. While the Piaget Polo Skeleton in Blue isn’t a limited edition, it also isn’t cheap, and the watch is currently accompanied by an official retail price of $30,900 USD — which is quite a lot when you consider that at its core, this is a time-only stainless steel watch. However, many other luxury brands charge just as much for their stainless steel sports watches, and most of the competition doesn’t offer a skeletonized design or a vibrant color-coordinated micro-rotor movement. For more information, please visit the brand’s website.