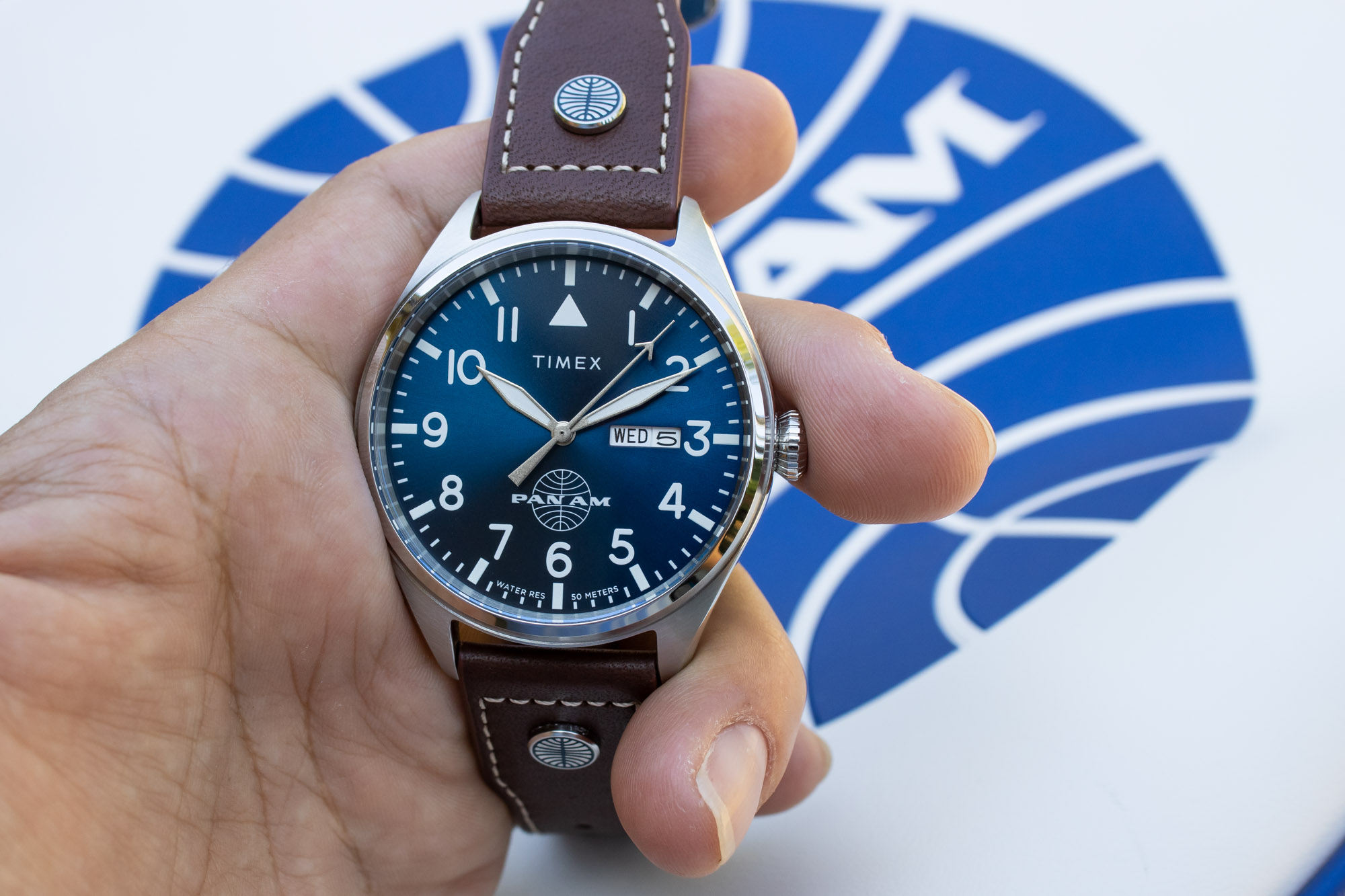 Within the United States, Timex is one of the very few watch companies that can rival the mainstream brand recognition of Rolex. To be fair, the two companies occupy polar opposite ends of the price spectrum, yet both enjoy similar levels of mainstream notoriety. One company represents the epitome of luxury and exclusivity, while the other is famous for being the affordable yet functional timepiece for the masses. However, if you were to ask a random group of Americans to each list three different watch brands, both Rolex and Timex are almost certainly guaranteed to be among the majority of their answers. Timex holds claim to being the number-one best-selling watch company in the United States, and while the vast majority of Timex’s products are now manufactured overseas, the brand still has its headquarters in Middlebury, Connecticut, and it is often considered to be the quintessential American timepiece company. 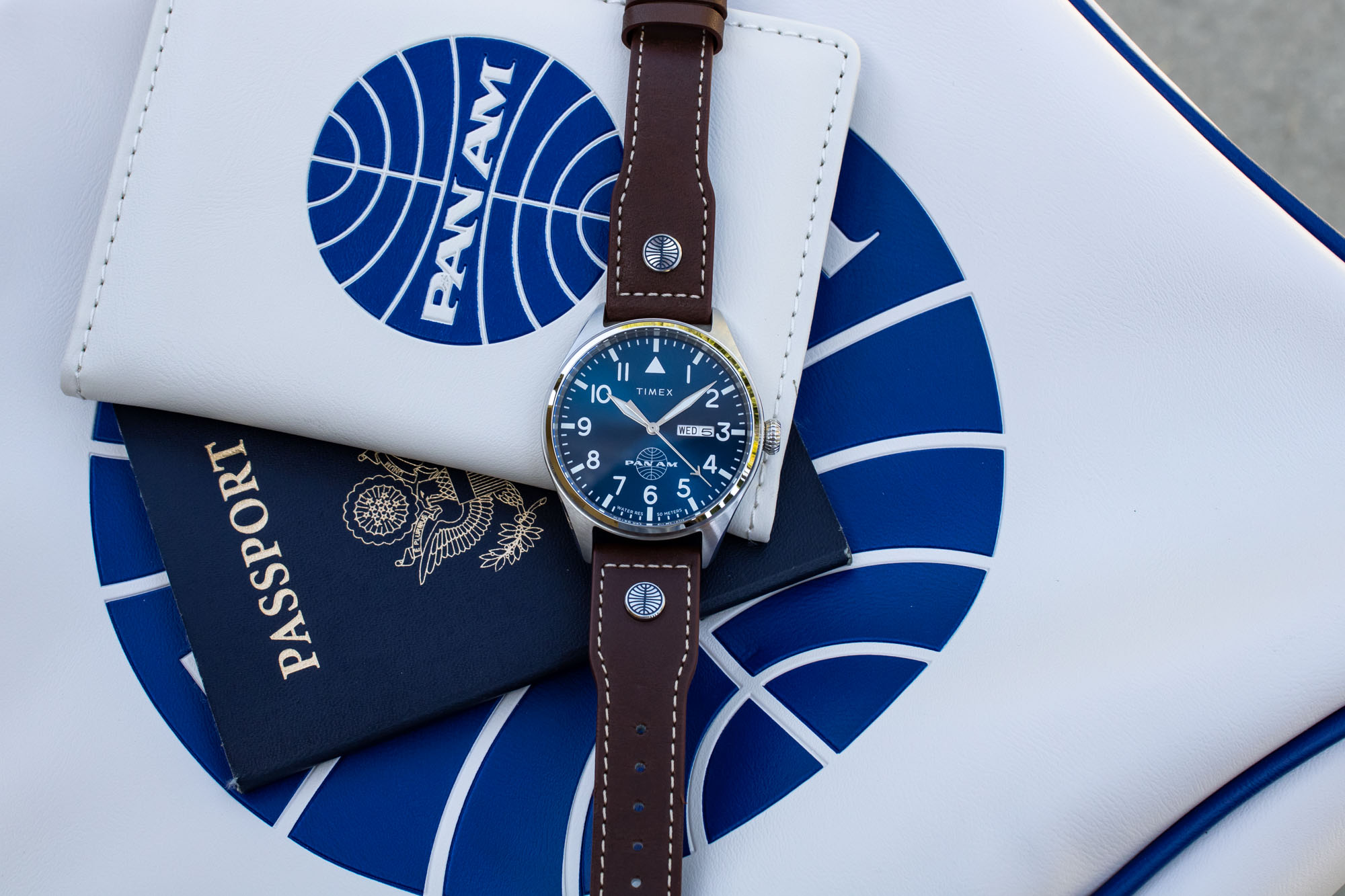 Within that same spirit, Pan Am Airlines is often celebrated as being the brand that embodies the golden era of American aviation, despite the fact that no Pan Am airplanes have actually flown since the early 1990s. In all honesty, the fact that Pan Am isn’t around anymore is probably precisely why it embodies the golden era of commercial flight. Founded in 1927 and bankrupt by 1991, Pan Am Airlines existed long before TSA and random security screenings, back when the concept of getting on an airplane was still new and sexy. People got dressed up to fly and smoked cigarettes in the cabins, rather than putting on sweatpants and noise-canceling headphones, only to stare into their phones for hours, playing Candy Crush or doom-scrolling through Instagram. Additionally, since Pan Am Airlines isn’t around anymore, it’s easy to celebrate the brand’s history and the glamor days of aviation without feeling like you’re flaunting your frequent-flyer account. The glory days of Pan Am existed before I was even born, but there is a certain inherent cool that exists in the defunct airline brand, and when I heard about the recently announced Timex x Pan Am collaboration, I happily took the opportunity to get a hands-on look at one of the co-branded watches. 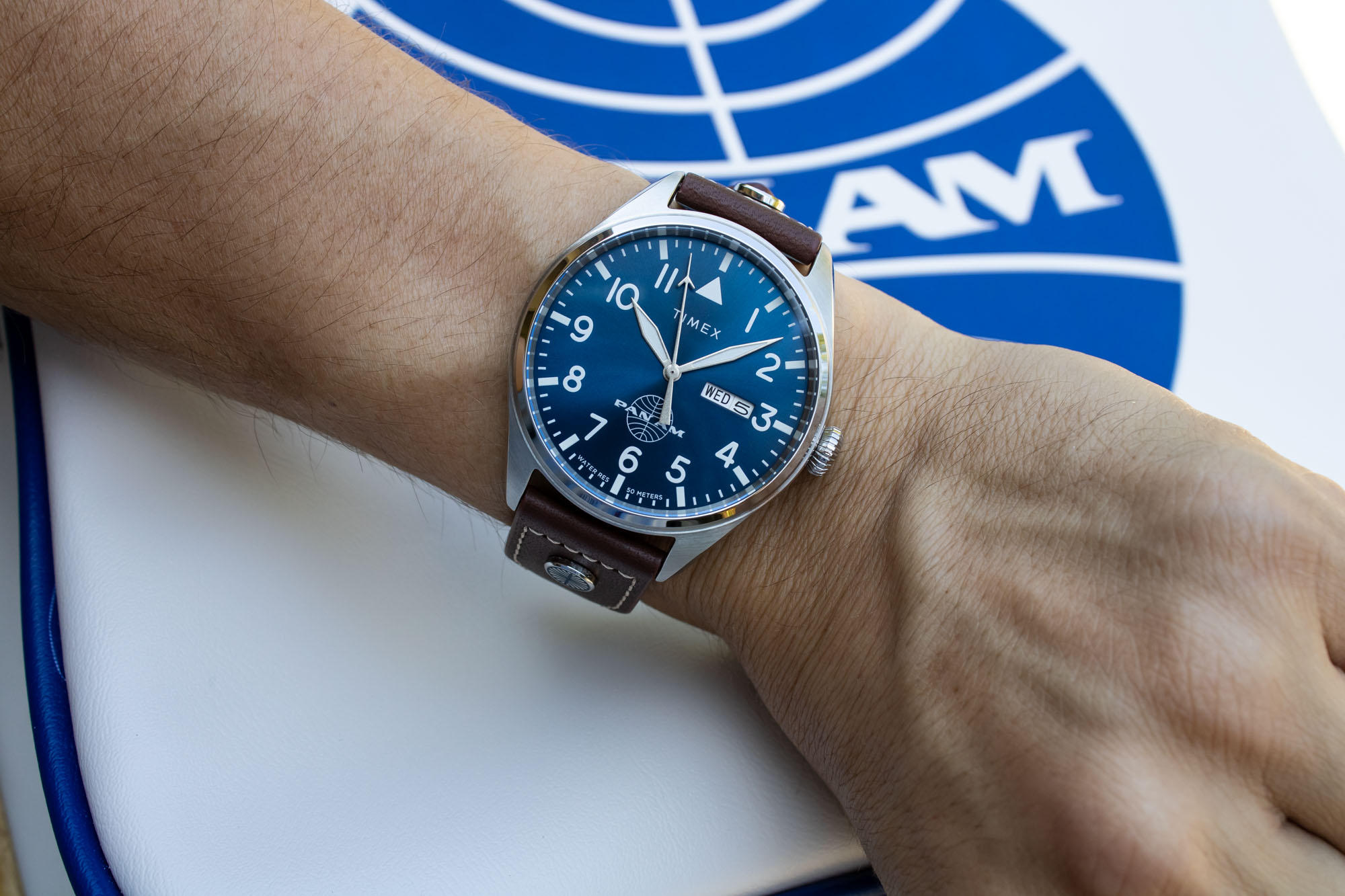 Although Pan Am no longer flies airplanes, the brand currently exists in a different form and is engaged in a number of different licensing and partnership deals. Timex is a partner for watches, but you will also find various other officially licensed products with the iconic Pan Am logo on them, such as travel bags, luggage tags, passport covers, and more. Specifically, in regard to the Timex x Pan Am collaboration, the collection is positioned within Timex’s Waterbury lineup of slightly more premium timepieces and currently spans two models: a day-date and a chronograph. Both models offer a similar overall aesthetic with classic pilot’s watch design cues and undeniable Big Pilot vibes with their blue sunburst dials and brown leather straps. I didn’t specify which version I would be interested in reviewing when I requested a sample, and the model that I was sent was the day-date version, which offers a very traditional pilot’s watch aesthetic, and allows the Pan Am logo to sit unobstructed on the lower half of the dial. 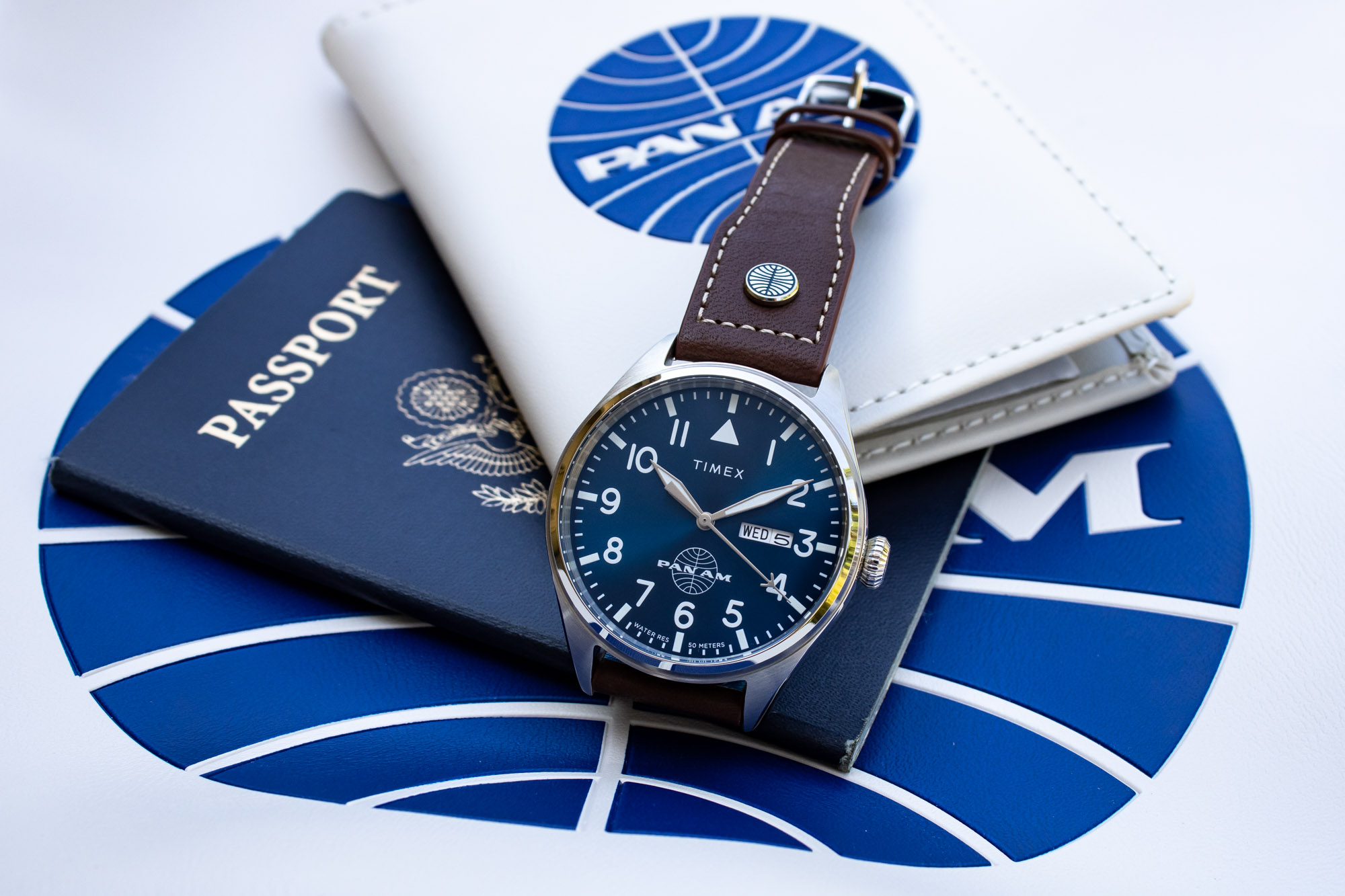 Much to my surprise, the review sample that I requested showed up packaged with a bunch of other Pan Am branded products, which as far as I can tell, don’t actually have anything to do with the Timex watch collaboration itself, but rather are some of the various other officially licensed Pan Am products that have been created through the company’s other partnerships. Although I’m personally not usually a fan of large logos or prominent branding on the products that I wear, these Pan Am items are inexplicably rather cool, and I’m a bit more open to the idea of wearing a logo when it’s a defunct airline that harkens back to the dawn of the jet age and the glamor days of aviation. Plus, I guarantee that I would look like an absolute vision walking through the airport while rocking all of this Pan Am gear at once, and I’m determined to make that happen at least one time while these samples are here with me for review. That said, while the travel bag, luggage tag, and passport holder don’t come included with the purchase of a Timex x Pan Am watch, both the day-date and chronograph model come packaged in a special collectors box, complete with a little wing-shaped Pan Am Airlines pin. 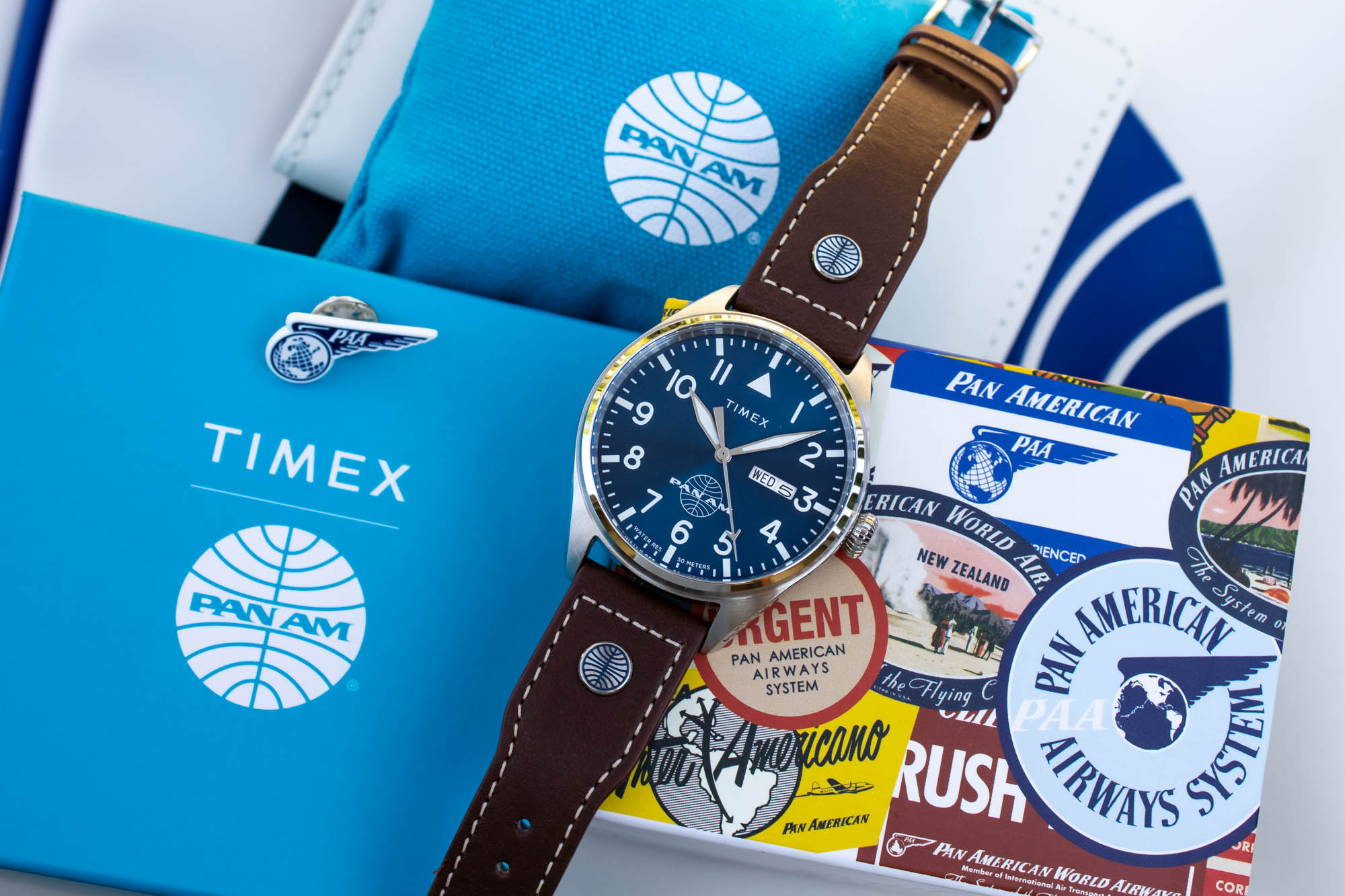 As far as the watch itself, the case of the Timex x Pan Am Day-Date is crafted from stainless steel and measures 42mm in diameter by 11mm-thick, with an overall lug-to-lug distance of just over 50mm. On Timex’s website, the brand lists the height of the watch as 12mm, but I’m fairly certain they are measuring that from the top of the crystal to the bottom of the lugs, which curve downward below the caseback by approximately a millimeter. I’ve measured the center of the case numerous times with digital calipers, and the actual case thickness is closer to 11mm rather than its total height of 12mm. Given that the Timex x Pan Am collaboration models are part of the brand’s more-premium Waterbury range, they feature cases crafted from stainless steel with alternating brushed and polished surfaces, rather than the chrome-plated brass cases that are used on many of Timex’s entry-level models. On the side of the case at the 3 o’clock location resides a 7mm onion-shaped crown that is signed with an engraved Pan Am logo in blue. Meanwhile, a flat mineral glass crystal protects the dial side of the watch, while a snap-on stainless steel caseback engraved with another Pan Am emblem helps provide 50 meters of water resistance. 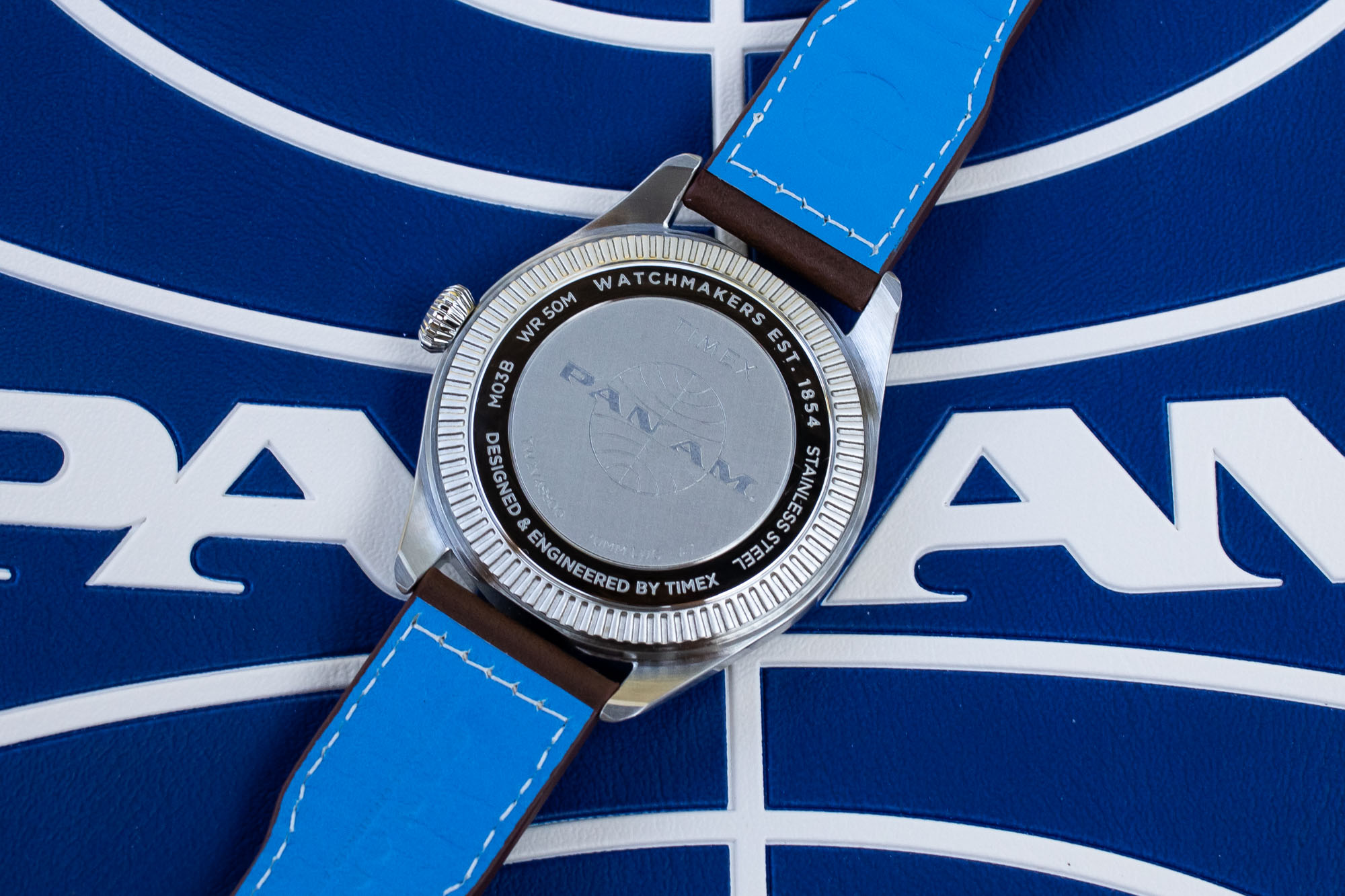 When it comes to the dial, the overall design is what could best be described as a slight variation of a traditional Type A flieger dial, with crisp white markings and a bright blue metallic sunburst finish. The “Timex” name appears just below the triangle at the 12 o’clock marker, while the iconic Pan Am logo prominently occupies the lower half of the dial. Next to the 3 o’clock marker is a rectangular window that contains both the day and date display, with the dual language day disc (English and Spanish) featuring its markings for Sunday in red letters, while the rest of the days and the date are printed in black. At the center of the dial are a trio of hands that have been given a matte silver finish. The sword-shaped hour and minute hand include luminous centers, while the seconds hand features a unique tip that slightly resembles the shape of an airplane. In addition to the two hands, each one of the hash marks located on the periphery of the Arabic numeral hour markers is also finished with luminous material, although none of it glows all that brightly or for that long of a time. While the luminous material is undeniably a bit lackluster, the watch’s large size, legible design, and high-contrast dial markings still make it fairly easy to read in all but the absolute darkest of conditions. 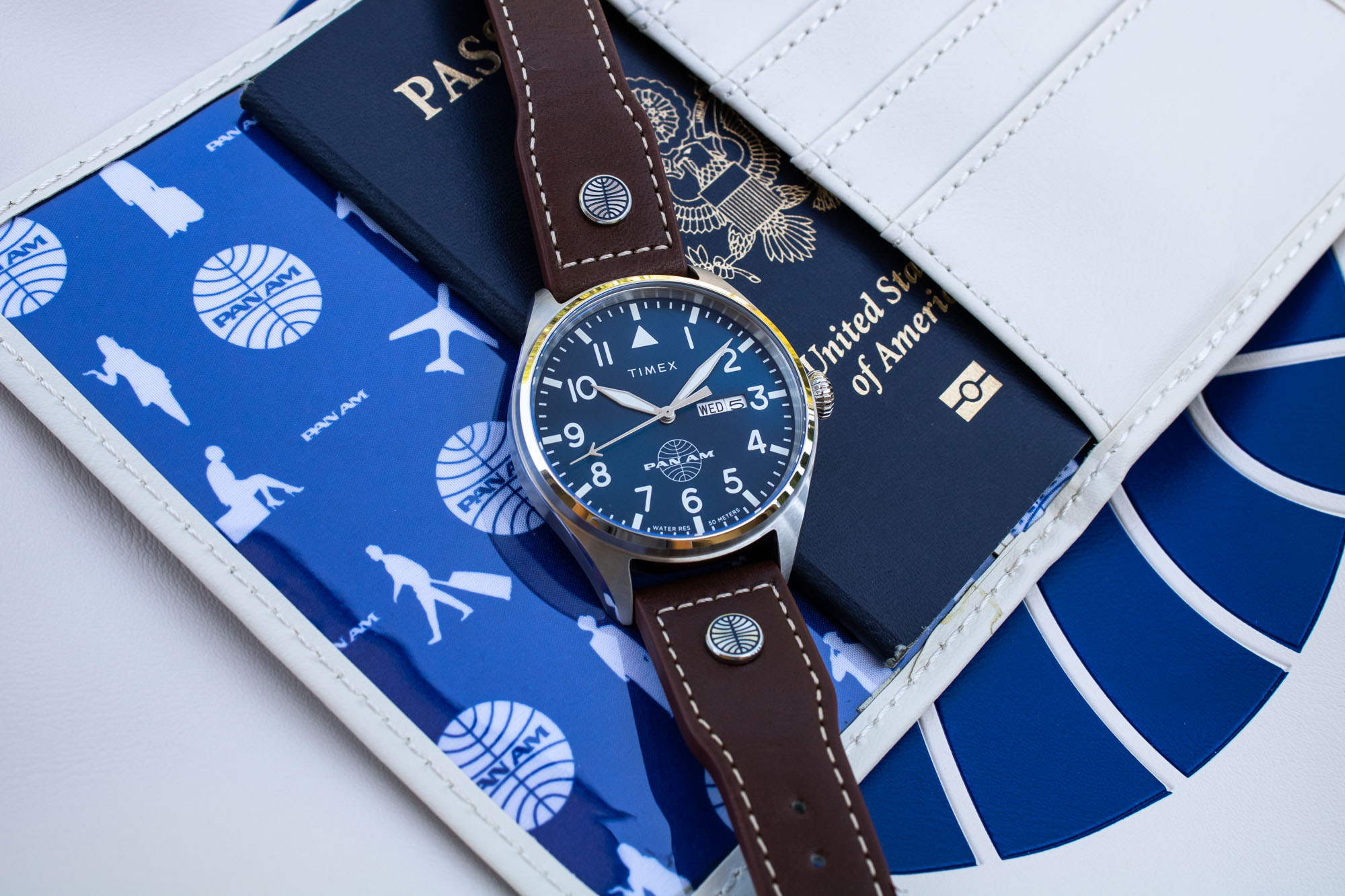 Powering the Timex x Pan Am Day-Date watch is a simple battery-operated quartz movement — and for those of you wondering, the answer is no; the movement isn’t loud at all. Although I’m not personally bothered by a loud ticking watch, I do recognize that some Timex models like the classic Weekender are significantly louder than your average timepiece; however, none of that exists with the Timex x Pan Am Day-Date watch. Additionally, unlike many of Timex’s other models, this one does not feature the brand’s signature Indiglo electronic backlight. Due to the dial’s metallic blue sunburst finish, Indiglo likely wouldn’t have been an option anyway, as it requires a dial surface that will allow light to pass through it, rather than one that is specially designed to reflect light. That said, the simple fact that many of Timex’s least expensive watches come with a feature that is missing on this more premium model does still feel a bit strange. With all of that in mind, the quartz movement powering the Timex x Pan Am Day-Date is actually probably a small step up from what you normally find inside many of the brand’s budget-friendly watches. For many of its more premium models, Timex frequently opts for entry-level Seiko or Miyota movements, and given the lack of Indiglo, the quiet ticking, and the red Sunday text on the dual-language day disc, there is a very good chance that it’s one of these two well-known and reputable Japanese movement manufacturers that is responsible for the Quartz caliber powering these Timex x Pan Am watches. 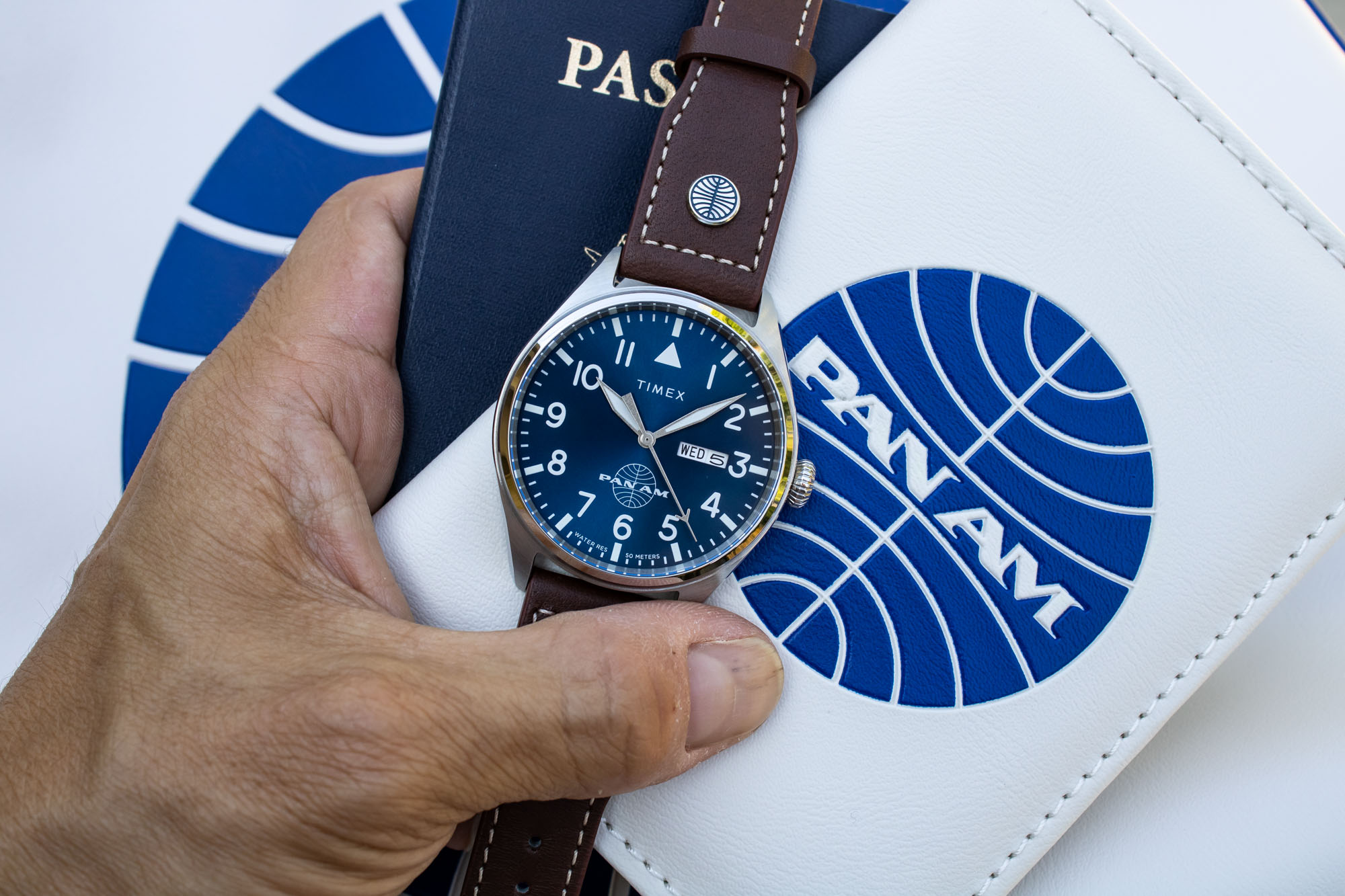 Fitted between the lugs of the Timex x Pan Am Day-Date watch is a 20mm brown leather strap that tapers to 16mm at its signed stainless steel pin buckle. The overall aesthetic is very similar to the leather straps fitted to traditional pilot’s watches with rivets near the lugs on each side, followed by a sharply sloped taper rather than a gradual one that steadily decreases in width as it moves towards the buckle. Additionally, instead of featuring normal rivets, the heads of the two rivets on the strap are each adorned with the Pan Am globe logo, while the polished stainless steel pin buckle is engraved with the “Timex” logo. In terms of quality, the leather strap is a step or two above what usually comes fitted to Timex watches and it also features a bright blue liner, which serves as a reference to Pan Am’s company colors. While the blue lining isn’t visible while wearing the watch, it adds a fun splash of color that catches your eye every time you either strap on the watch or take it off at the end of the day. The design of the strap offers plenty of holes for adjustment, and although it is slightly stiff right out of the box, I found that it quickly conformed to the shape of my wrist and became quite comfortable to wear. 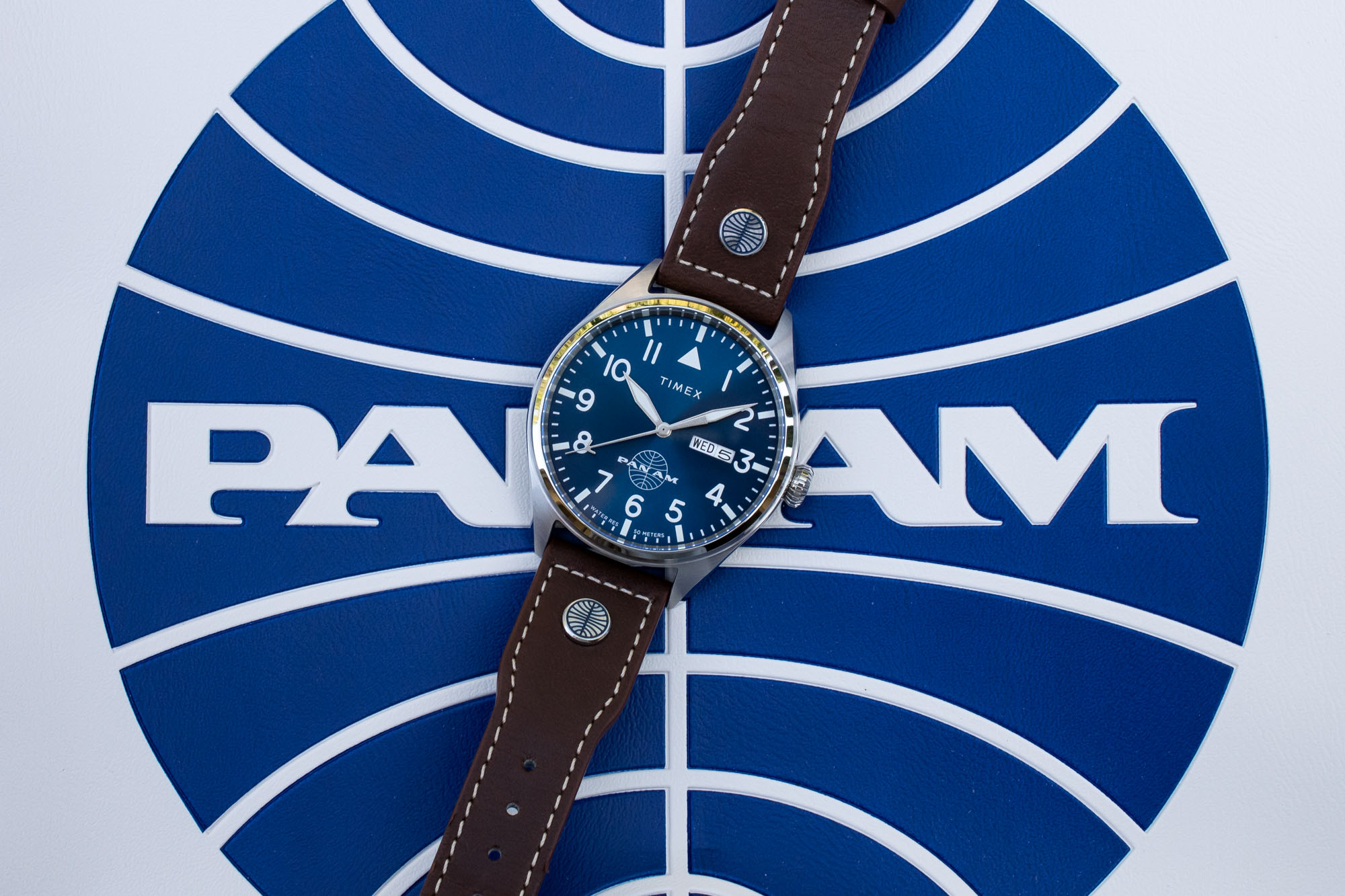 All things considered, the Timex x Pan Am collaboration watches offer a lot of American aviation fun for a very reasonable price. Both Timex and Pan Am are inherently American in spirit, making the partnership between the two brands feel like a natural one, and while some watches with a connection to Pan Am can cost a small fortune, these are firmly priced within the affordable territory. The Timex x Pan Am Day-Date watch is accompanied by an official retail price of $179 USD, while its chronograph sibling comes at a slight premium and is priced at $219 USD. Additionally, these collaboration pieces aren’t limited editions where production is going to be capped at a specific number, meaning that everyone who wishes to purchase one should in theory be able to get their hands on the version of their choice, although they may need to wait until the second round of supply, as both models currently appear to be sold out on Timex’s official website. With that in mind, I can’t imagine that these Pan Am collaboration watches will remain part of Timex’s catalog forever, and they present a compelling option for those who want a watch that offers maximum aviation fun at a very budget-friendly price point. For more information, please visit the brand’s website.