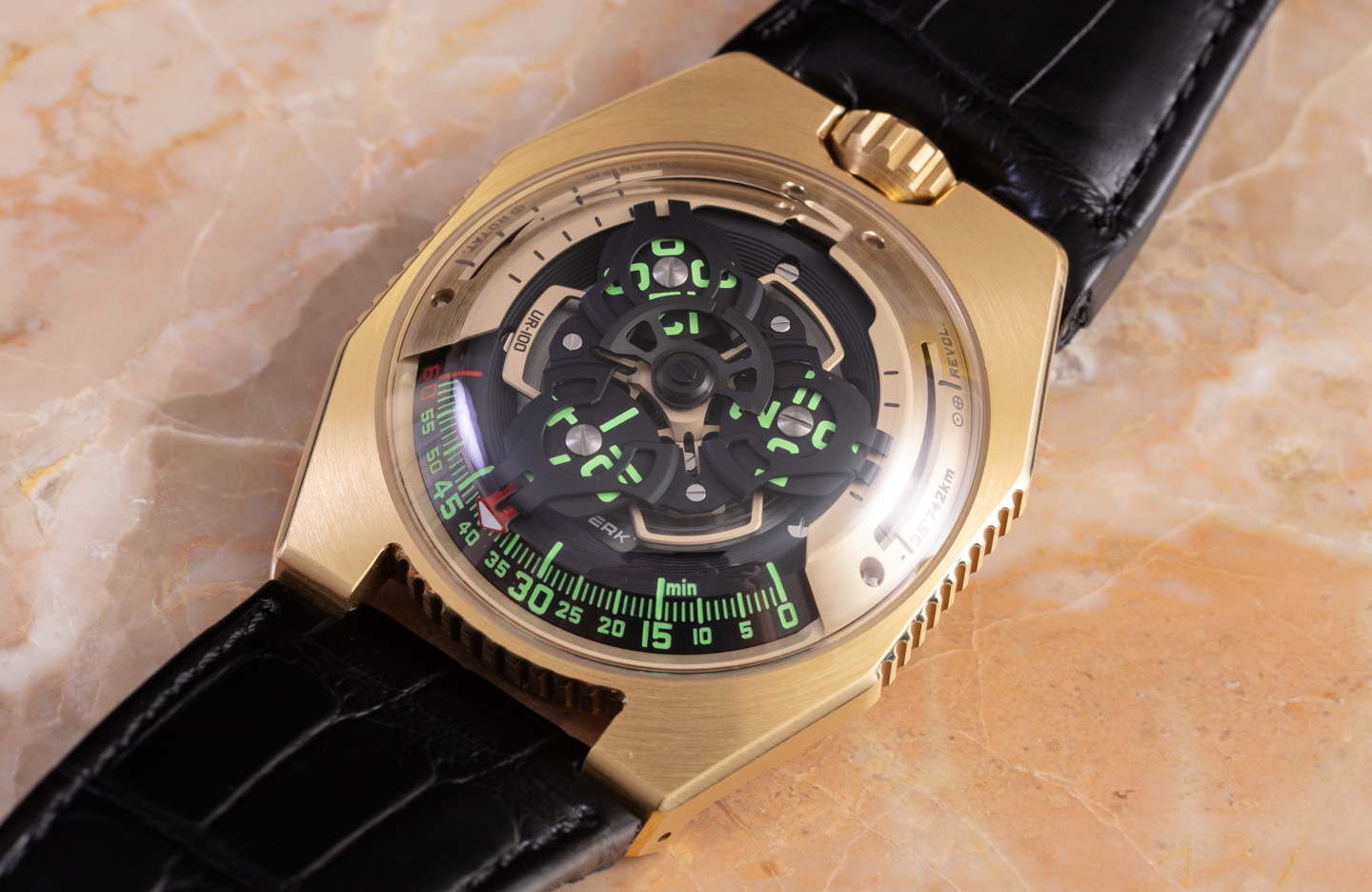 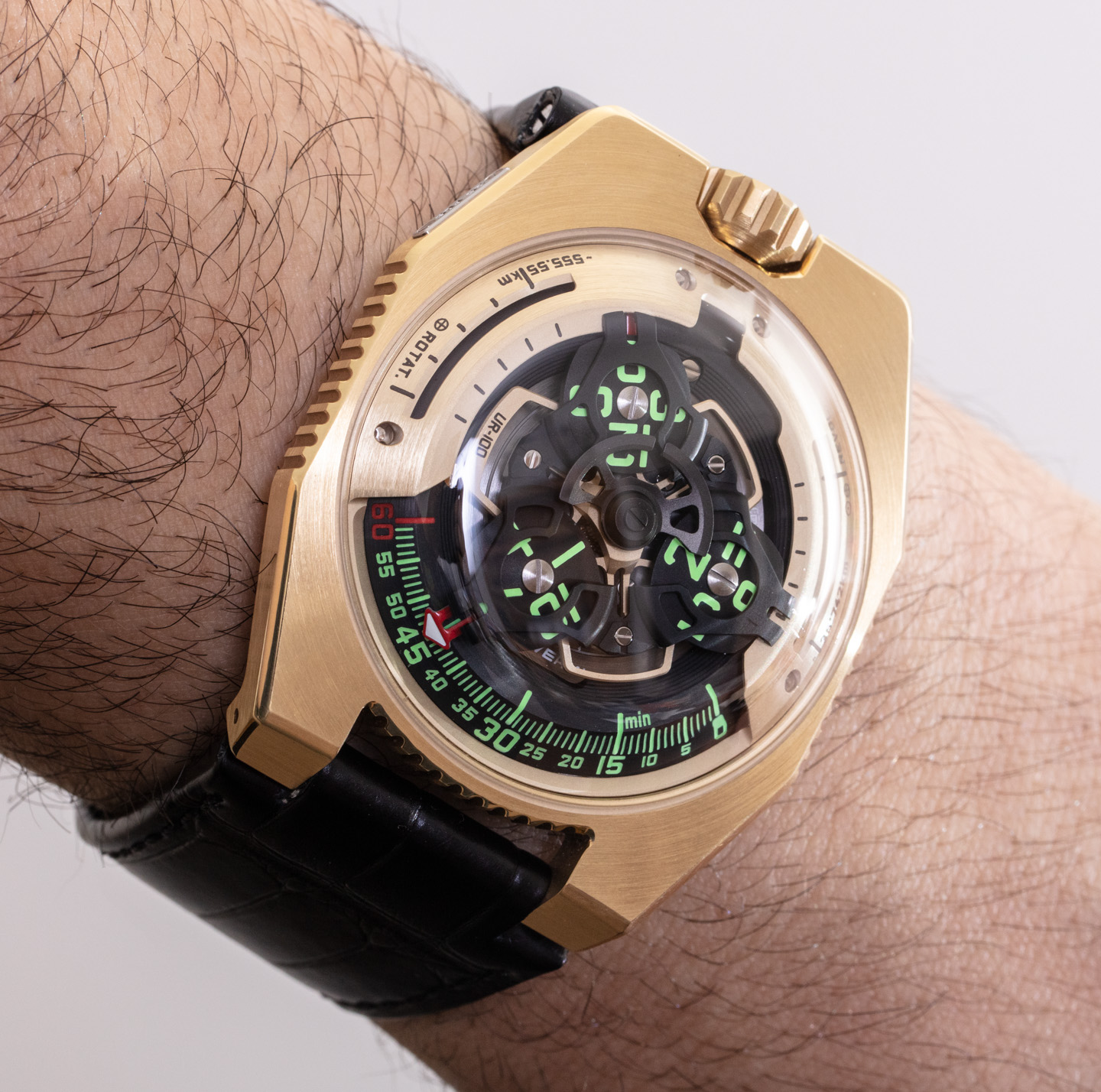 Geneva-based URWERK doesn’t make a lot of watches in precious metals, often preferring more practical materials such as steel or titanium. This particular UR-100 model family watch is among the rare exceptions being crafted from yellow gold and is known as the UR-100 Gold “C-3PO” (from the Star Wars universe, of course, and originally debuted on aBlogtoWatch here). Back when I first started covering watches, I recall that the URWERK brand, then only 10 years old, would do funny things like take a platinum or gold watch and coat it black. Precious metal cases seem a bit antithetical to the larger mission of this avant-garde high-end watch brand, but of course, there is no such hard and fast rule at URWERK.

The UR-100 is actually among URWERK’s more “entry-level models,” which means that this watch is priced more like a really nice Acura as opposed to a mid-range Mercedes Benz. Thus, it being in gold is less about prestige and positioning and more about aesthetics and the appeal of gold as a watch case material. Even though gold is softer than steel, it has a look and feel that is unmatched by the materials that seek to emulate it. URWERK also points out that the entire 41mm-wide case is machined from one solid piece of gold. The case is further 14mm-thick (at its widest point) and has a 49.7mm case length (lug-to-lug) distance. Case finishing is very well done, and the many points of “anglage” (angle polishing) are very finely performed. 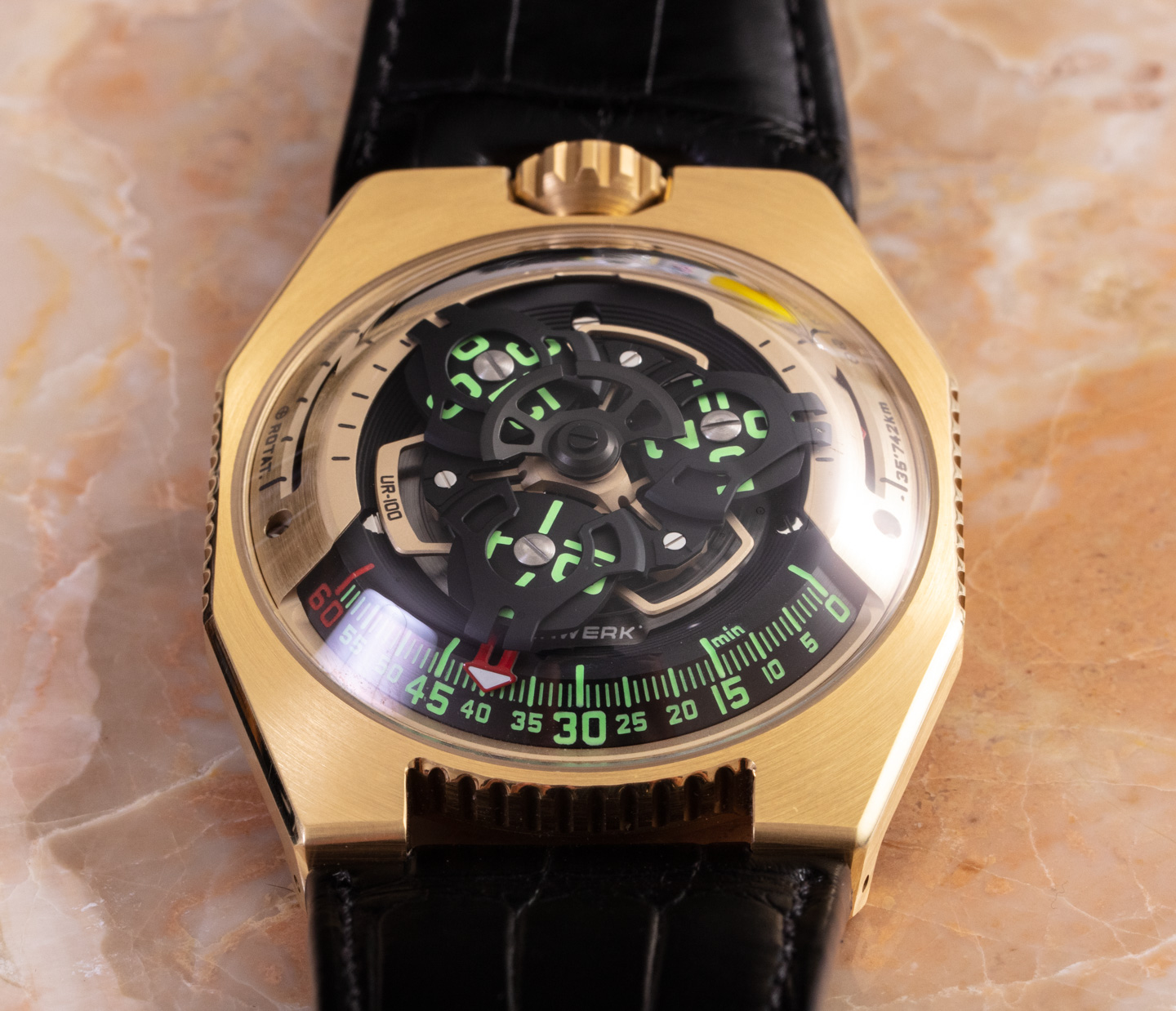 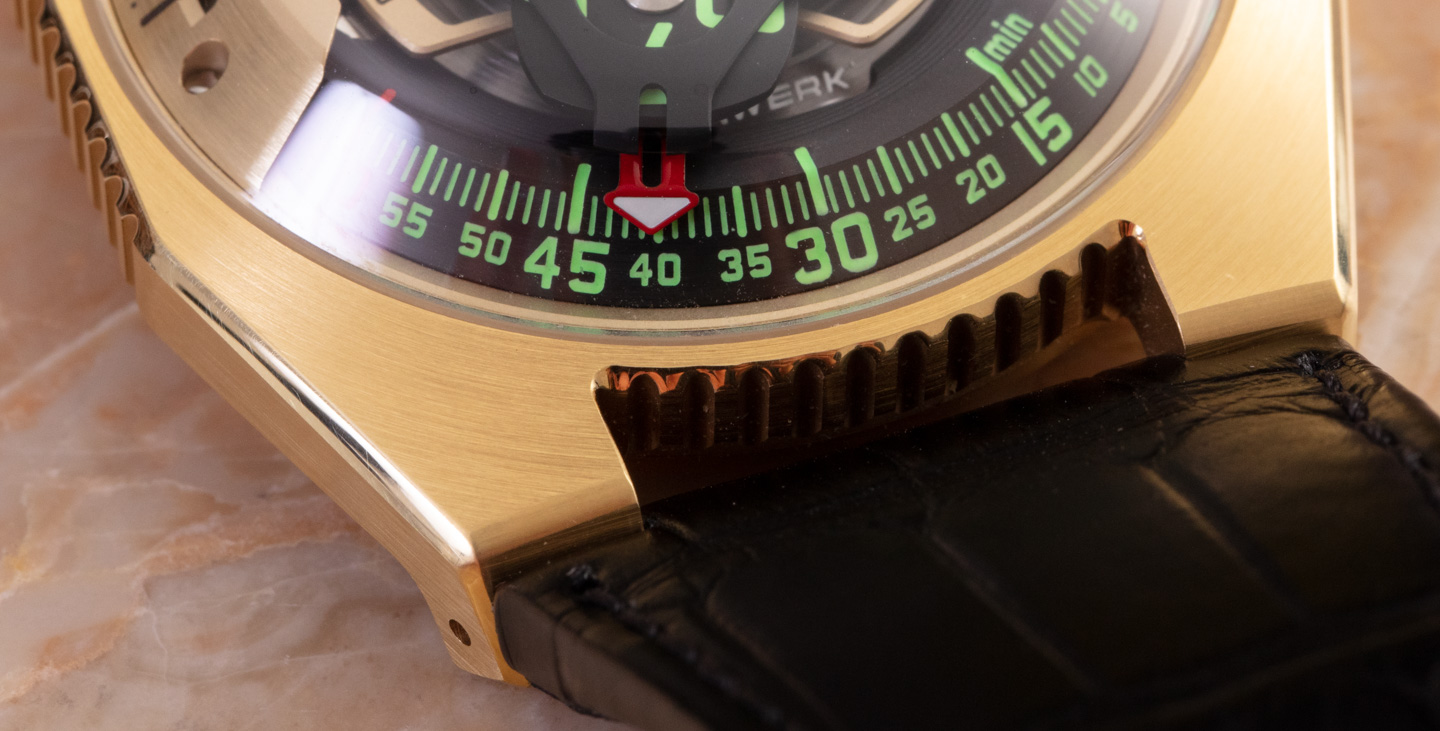 In the scheme of strange case shapes at URWERK, the UR-100 is a lot closer to “ordinary” than some of its other models, but it still has a visual distinction that allows it to look and feel like nothing else out there. Once again we see URWERK’s fascination with making the case asymmetrical when it comes to the top and bottom lugs. The case’s upper lugs look more like an extended guard for the top-mounted crown, and the lower set of lugs is totally different with a “Gerald Genta” angle to them. I admit that, in pictures, the UR-100 case looks a bit odd on the wrist, but it wears very comfortably.

Reading the time on all UR-100 family watches is done via URWERK’s traditional satellite time system that has been adapted for this case and movement. There are three satellites with four hour numerals each that revolved around the central dial. Minutes are indicated via the curved linear display year the bottom of the dial using the red-colored hand. This hand attaches to the visible part of the satellite hour system, then hides under the periphery ring to be seen again two cycles down the road. Reading the time is simple once you get the hang of it, and indicating the time is the exclusive complication in this automatic movement. 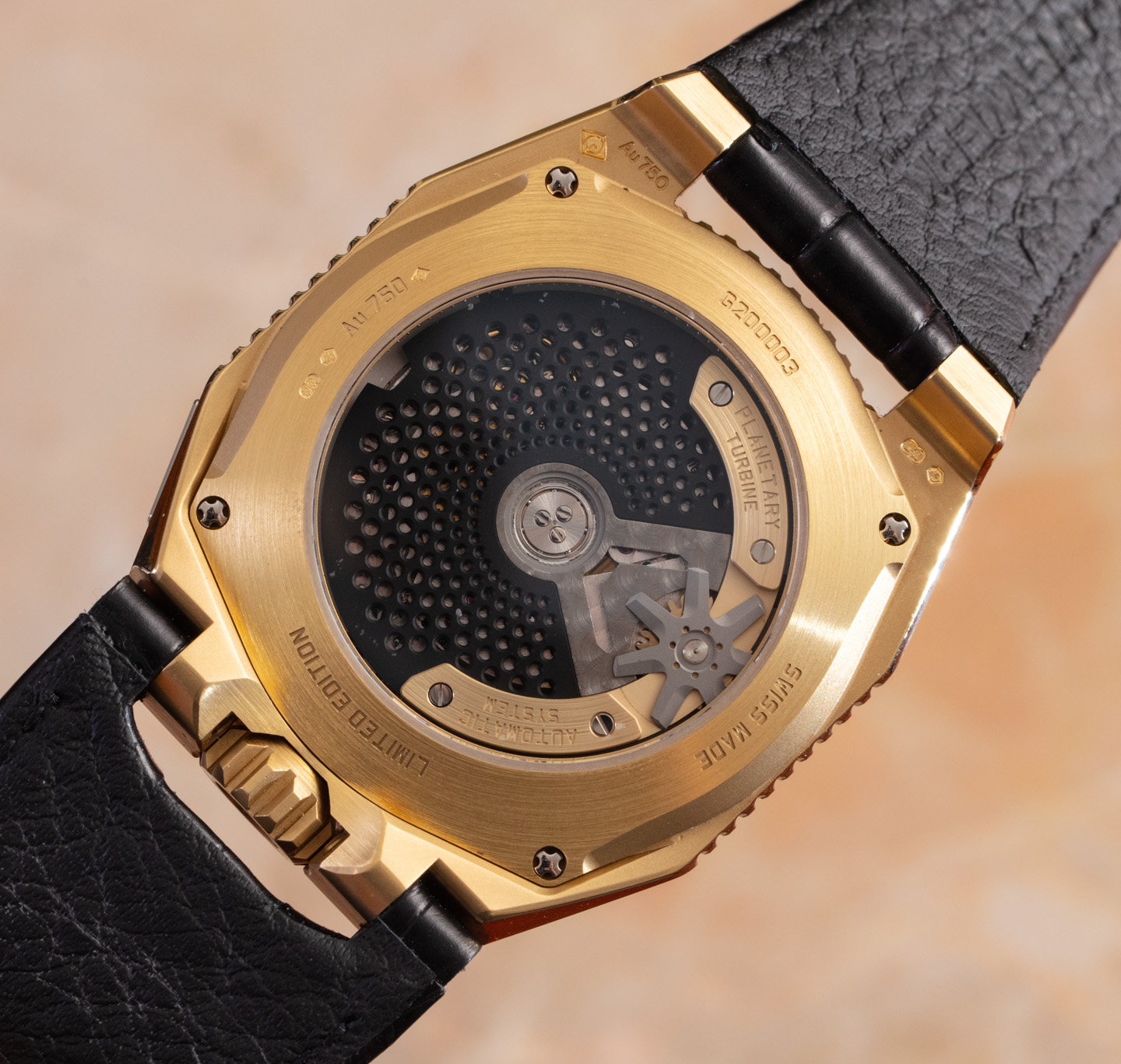 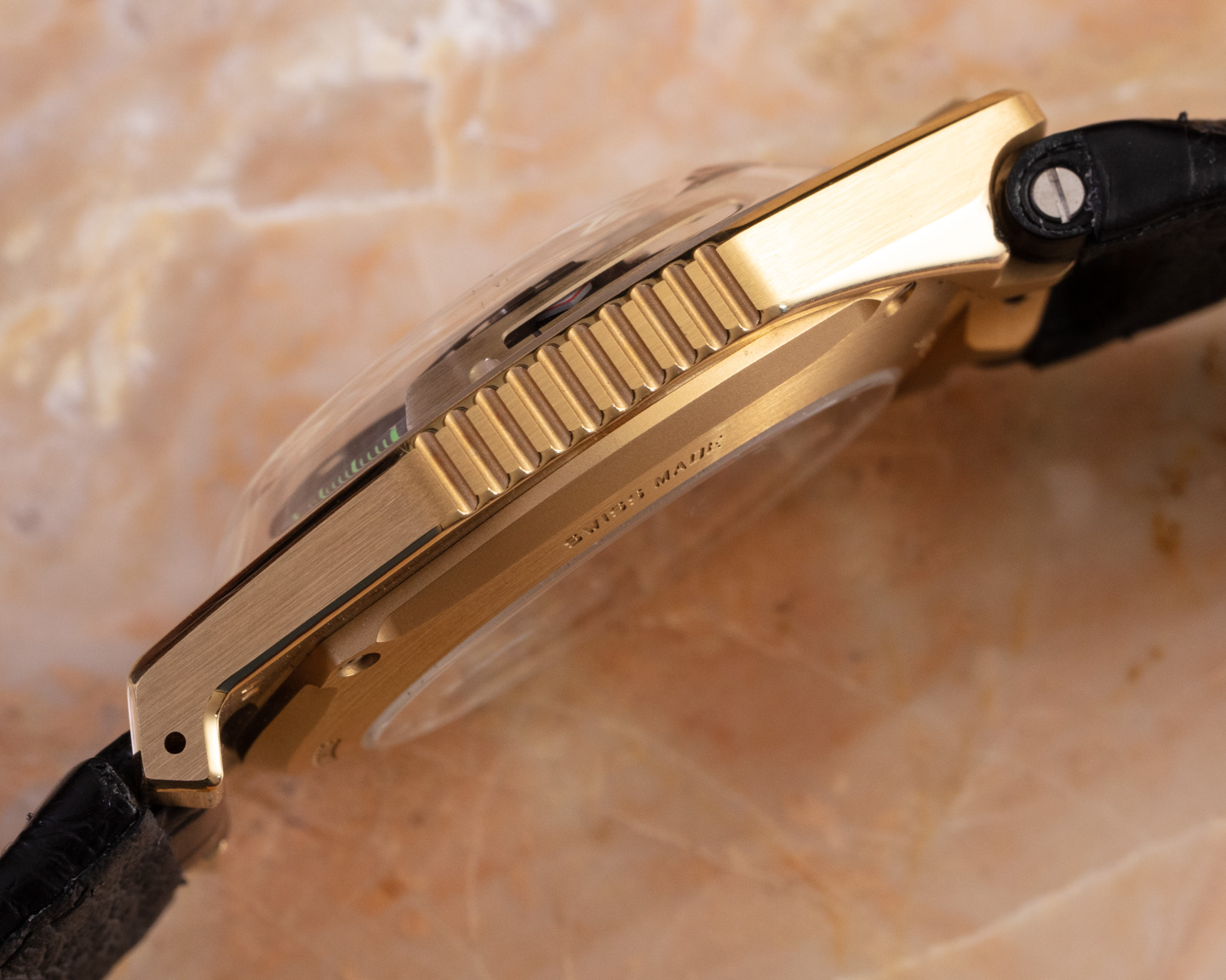 The indicators on the side of the dial are more emotional and relate to the fact that our measure of time is mostly based around the rotation of the Earth. Thus, the sides of the watch have scales that connect the passage of the day with the rotation of the Earth, given the historic origin of our celestial-based system for indicating time. One of these two 20 minutes indicators shows the rotational distance of the Earth during that time period (555.55 km), and then the other side shows the distance the Earth revolved around the Sun (35,742km) in that time. Turn the watch over, and you’ll see an automatic winding system that is also straightforward in its operation but novel in its construction.

Inside the watch is the in-house-designed URWERK caliber UR 12.01 automatic movement which operates at 4Hz with 48 hours of power reserve. If you turn the automatic rotor, you can see a “walking gear” that looks like a spinning turbine. What is the “Planetary Turbine” in the watch all about? The idea, according to URWERK, is a system that stabilizes the movement of the automatic rotor in an attempt to reduce wear and thus increase service time intervals. In short, if the system works as planned, the automatic rotor system for the UR 12.01 movement will break or require repair less frequently than those automatic systems without this particular and neat-looking assembly. In any event, the mechanism looks great, and that’s what will continue to keep the UR-100 family of interest to URWERK collectors. 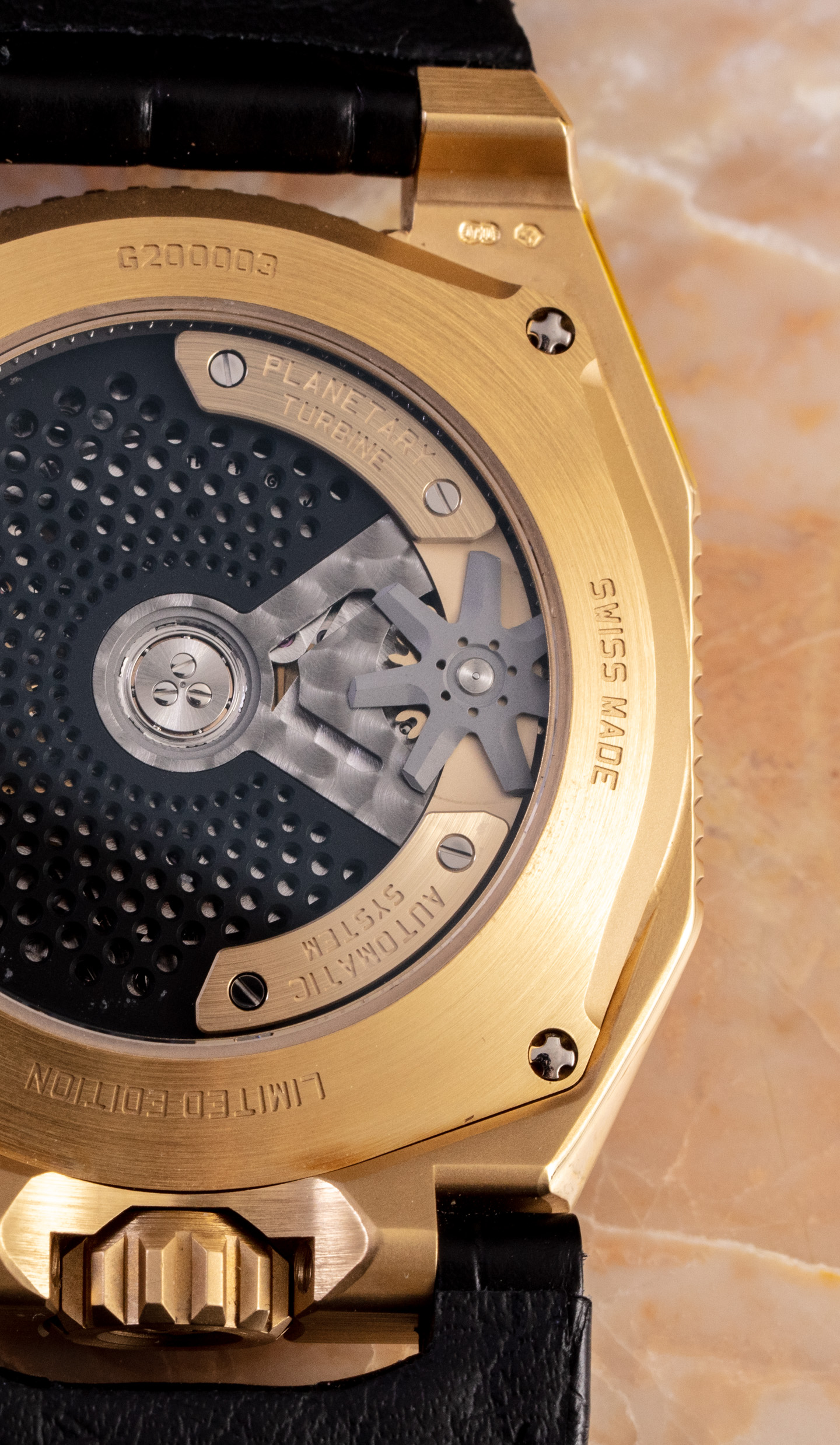 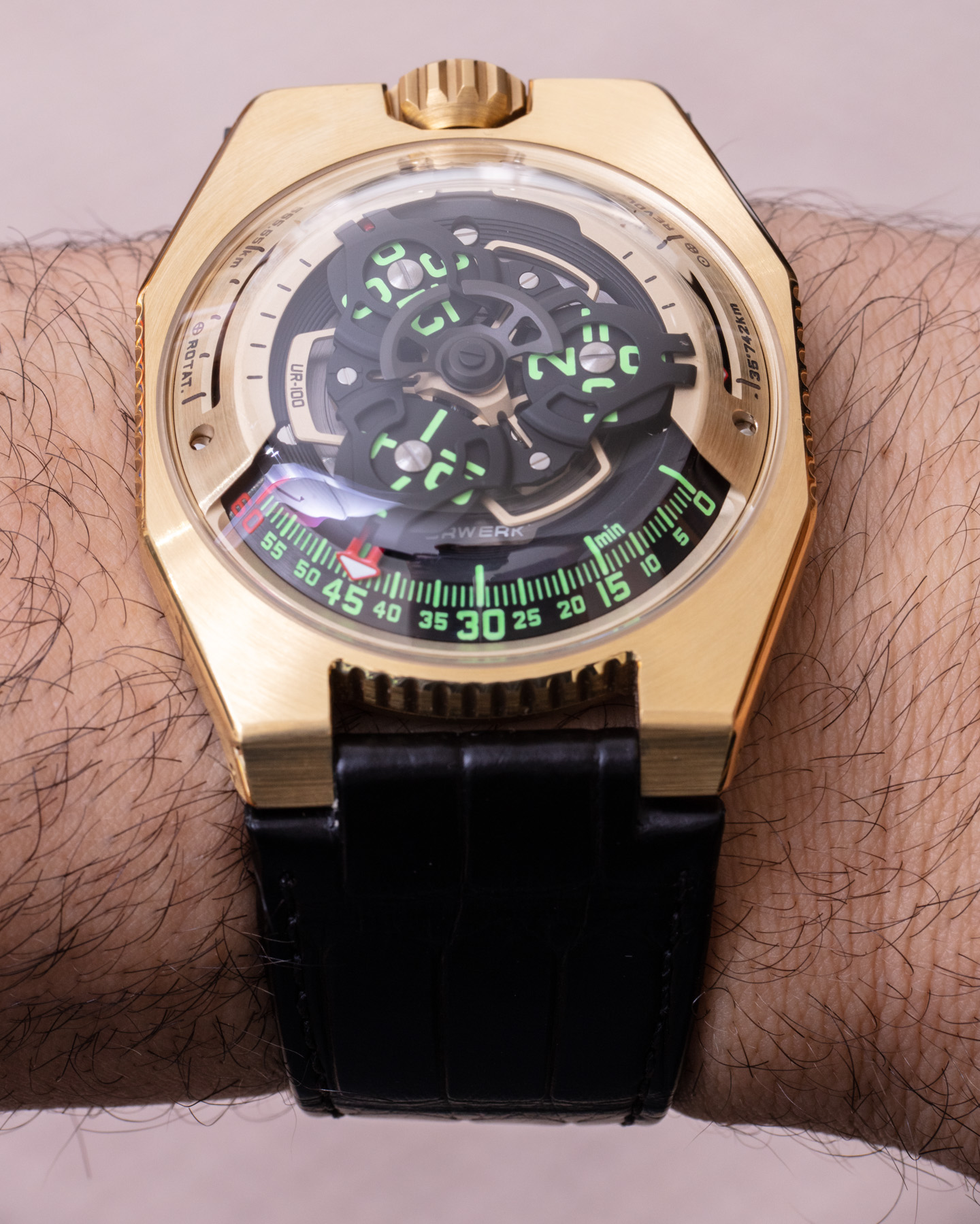 The UR-100 Gold “C-3PO” isn’t the only precious metal UR-100 watch that URWERK has produced so far, actually. There is the very similar UR-100 Electrum, which isn’t in 2N 18k gold, but rather “Electrum,” which is an alloy of yellow gold and palladium. The case colors look more or less the same, but rather than the UR-100 Gold’s smooth brushed case time, the Electrum has deeply engraved concentric ring grooves that offer a different visual experience. Going back to this UR-100 Gold, you can perhaps see why URWERK felt it was suitable to lend it the friendly moniker of “C-3PO,” everyone’s favorite gold-colored droid. URWERK certainly has the color down, but I still think that back in 2008, fellow high-end Geneva watchmaker MB&F captured the “C-3PO face” better with the HM3 Starcruiser watch.

Coming on a slightly glossy black alligator strap (I believe it also comes with a texture strap), the UR-100 Gold is a dressier URWERK that doesn’t look out of place in a casual setting, either. The watch calls a lot of attention to itself and is a decidedly nice watch even though it still costs less than most other URWERK timepieces. I don’t think URWERK will shift its focus to too many precious-metal watches, but I do agree that once in a while, doing so can lead to a very good outcome. The URWERK UR-100 Gold C-3PO is part of a limited edition of 25 pieces and has a retail price of $60,000 USD. Learn more at the URWERK watches website here.