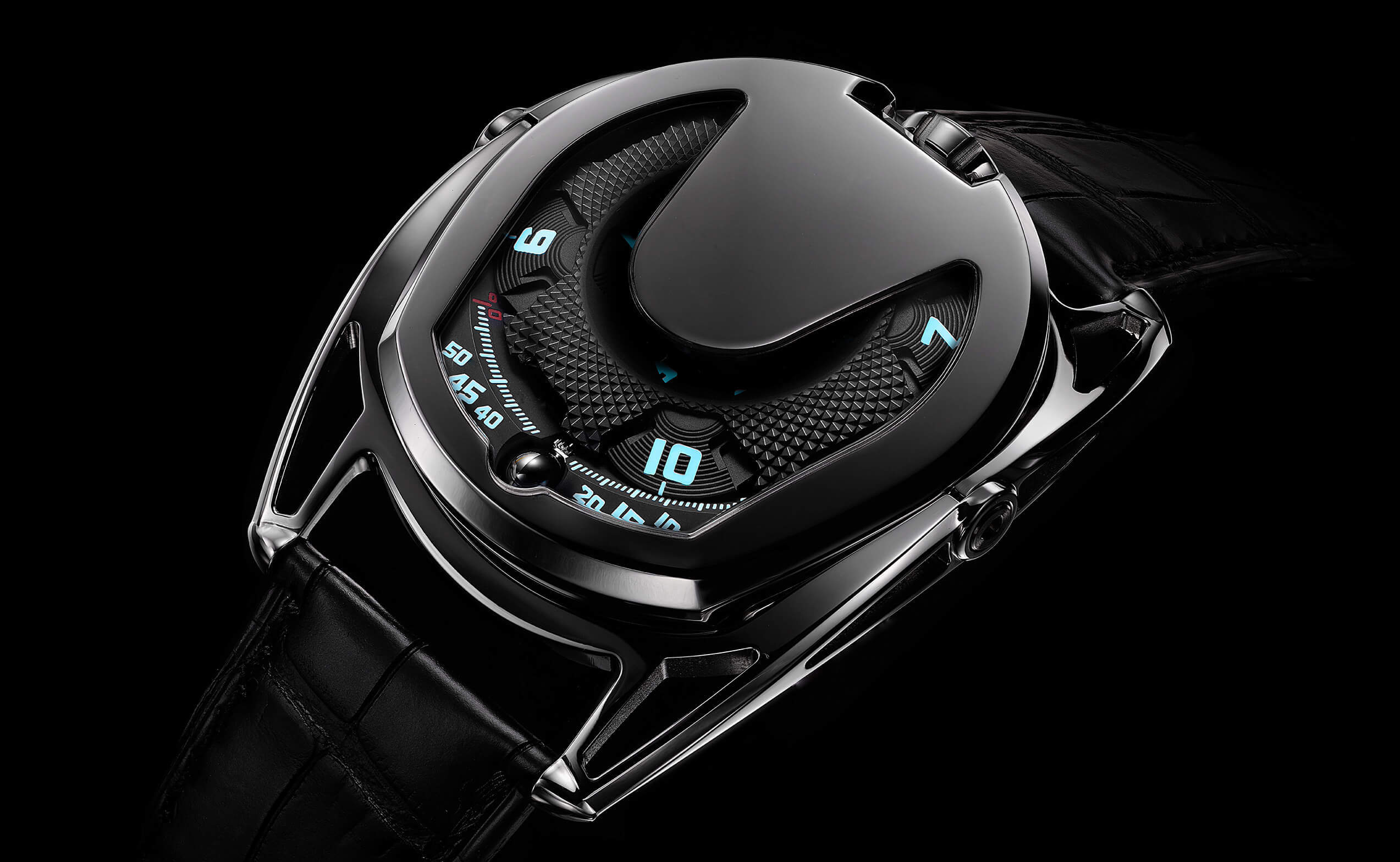 Announced earlier in the year, the majority of the watches for the Only Watch auction 2019 were revealed in all their glory there and then. One watch that remained under wraps until now, however, was the intriguing collaboration between De Bethune and Urwerk – the De Bethune + Urwerk Moon Satellite for Only Watch 2019. This typically futuristic model makes best use of an uncommon union between two major luxury brands. While both are known for pushing aesthetic limits, the usual output of De Bethune and Urwerk is markedly different stylistically. As a fan of both, I was keen to see the result of this partnership. And I must say, I’m not disappointed.

The initial visual impression is that Urwerk apparently led the line aesthetically, and thus it is not wholly surprising this model has a decidedly stealthy appearance to it. Where it really separates itself from the Urwerk core collection, however, is with the De Bethune-influenced lugs, and the cute, 3D moon located at the traditional position for six o’clock, taking the place of the 30-minute marker in this instance. One subtle difference between the 3D moon display deployed in the mono-branded De Bethune range is the visibility of the pinion leaves (teeth) responsible for driving the moon. The flawlessness of De Bethune’s standard aesthetic is modified here to play to Urwerk’s grittier strengths. The result is one that smartly melds the slick, floating perfection of the polished moon with the industrial futurism of Urwerk. 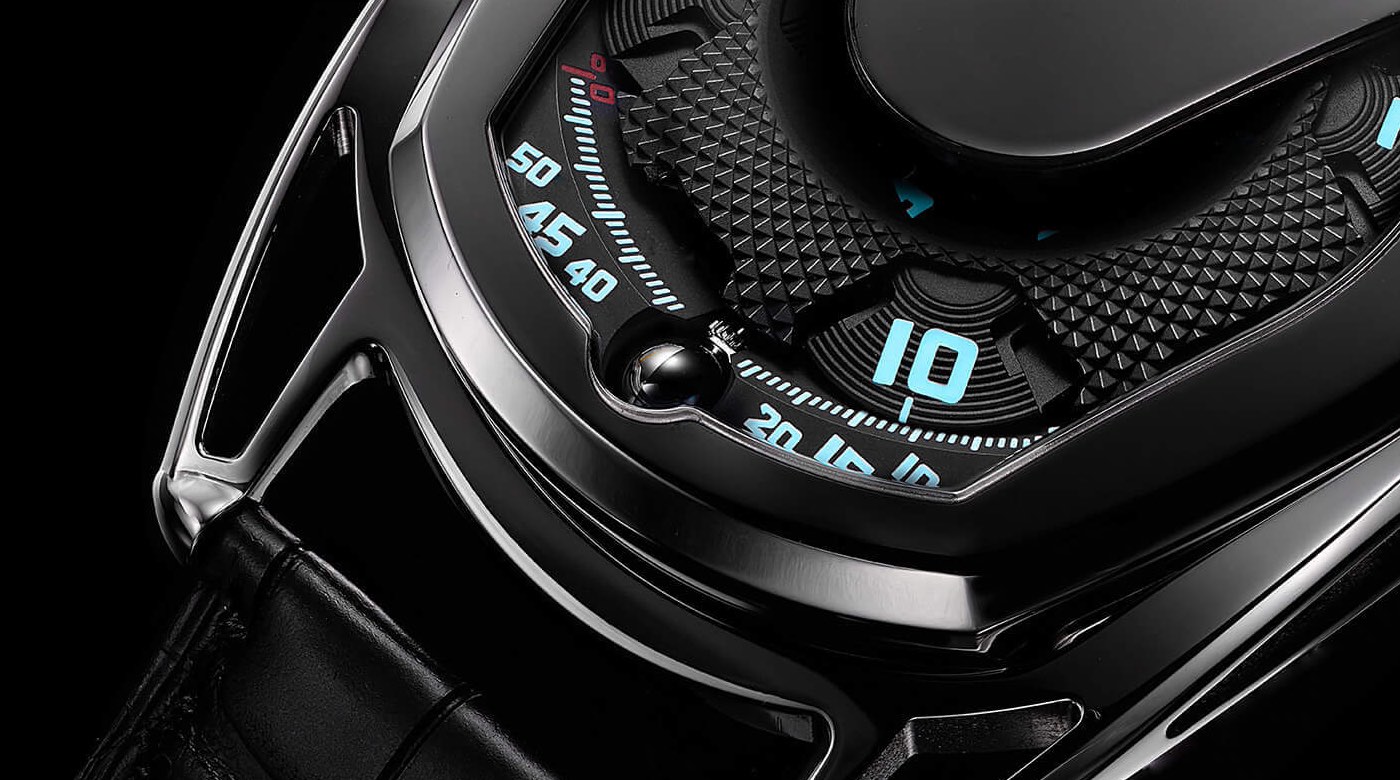 As is often the case with Urwerk watches that display the time in the wandering hours format, the hour discs track around the dial in a clockwise direction, resulting in the minutes ascending from right to left. For me, this method of reading the time is more intuitive when the minute scale is arranged vertically on the righthand side of the watch head, as in the UR-T8 collection with the Urwerk UR-T8 Colibri and the Urwerk UR-T8 Skull watch, or the UR-110 Eastwood, for example.

The hand-wound mechanical movement powering this piece is called the DBUR2105. A power reserve indicator on the reverse, visible through a sapphire caseback, indicates the remaining juice of a 4-day run time. This healthy reserve is thanks to a self-regulating twin barrel developed by De Bethune in 2004. De Bethune’s technical innovations come to the fore once more with the patented titanium balance wheel with white gold inserts, optimized for temperature differences and air penetration (2016), the De Bethune balance-spring with flat terminal curve (2006), the Spherical moon phase indication accurate to one lunar day every 122 years (2004), and the Triple pare-chute shock-absorbing system (2005). The movement has an operating frequency of 28,800vph

The case of this handsome beast is 43mm wide and 13.3mm thick. The floating lugs for which De Bethune is known are made from polished grade 5 titanium (yet another patent filed in 2006). In fact, just about the only thing about this watch that isn’t either unique to either brand or remarkable for one reason or another is the 30-meter water-resistance rating. But seriously, for a singular model of this nature to be taken anywhere near water would be a travesty, and I’m sure the one lucky owner will take better care of it than that. The De Bethune + Urwerk Moon Satellite for Only Watch 2019 will go under the hammer to raise funds for research into Duchenne Muscular Dystrophy at the Only Watch Auction 2019, due to be held in Geneva in November, and will no doubt be one of the stars of the show. Learn more at debethune.ch and urwerk.com.