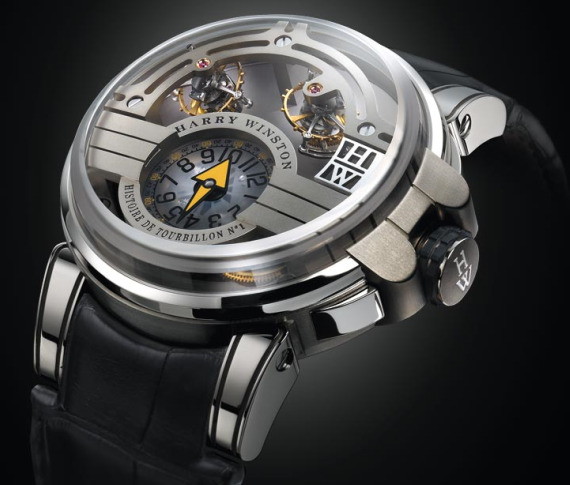 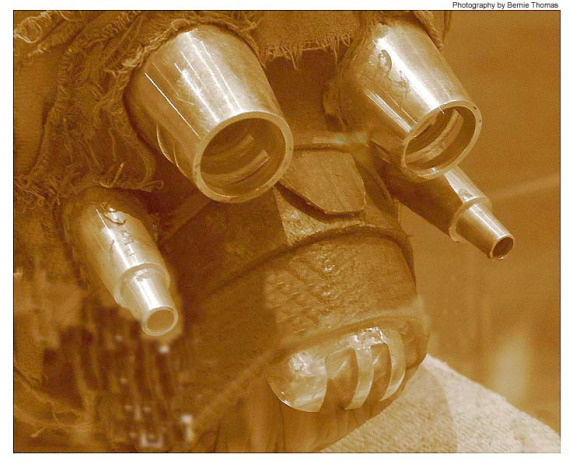 Is it weird that I sometimes compare watches with things I know in pop culture? I find it especially gratifying to compare exclusive multi-hundred thousand dollar timepieces with such plebeian pop culture essentials as the Tusken Raider Sand People from the Star Wars universe. Really though, look at the face of this Harry Winston Histoire de Tourbillon No. 1 and tell me that it does not (at least vaguely) remind you of the face of the Sand People (Person?). I see the axis points of the two tourbillon escapements akin to the eyes, and the dial as being similar to the circular Sand Person desert mask mouth. There are also the vertical slits that are present on both the watch and the Tusken Raider’s facial garb. Seems like a pretty good fit to me. If you recall, a while ago I also discussed the best watches for Darth Vader here, and there of course there was the MB&F Horological Machine No. 3 that had a resemblance to 3-CPO. I don’t think it is me, I think the watch makers are doing this on purpose!

If you aren’t taken with my choice of comparison, or just don’t care, then I’ll head right into telling you a bit about this new Harry Winston watch. Realize that over the past few years Harry Winston has made it very clear that the majority of their watches need to be very impressive looking to wear the Harry Winston name. Thus, the diamond maker has an impressive list of designers and watchmakers brought on board to design the Opus series, and everything else “watch” coming out of the company.

The instant model is the Harry Winston Histoire de Tourbillon No. 1 (reference 500/MMT48WZL)- which means the history of the tourbillon, and it is the first in this series (Harry Winston alludes to a No. 2, etc…). I don’t really understand what is historical about the watch, as it is a self-described modern interpretation of the tourbillon. The 48mm wide 18k white gold and Zalium case houses the complex manually-wound movement that displays the time on the front and rear of the watch. Zalium is a proprietary metal that Harry Winston uses. It is light weight and an alloy of aluminum and zirconium. In fact, the whole movement of the watch is reportedly very light. The case of the watch is impressive, but nothing we haven’t seen before from Harry Winston watches, it is the dial and movement which interests me – though I do like the very large domed sapphire crystal that literally is part of the case sitting on the dial like a transparent helmet. 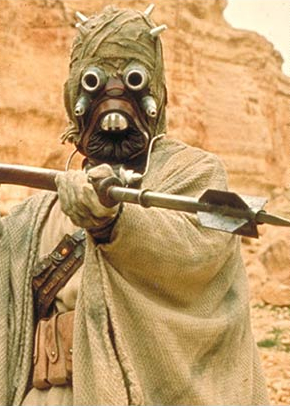 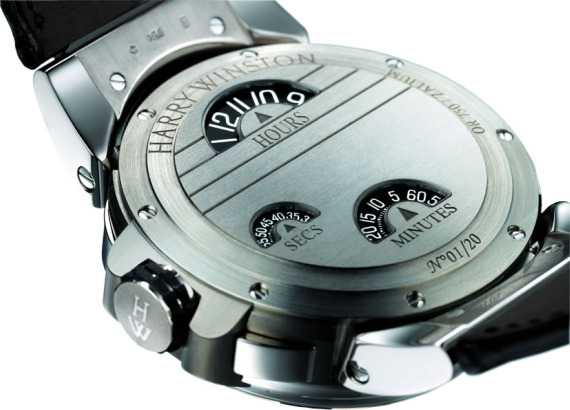 Looking at the dial, the first you’ll notice are the dual single-axis tourbillons that sit at an angle. While the watch does not need two escapements, it features a differential the averages out the rate of both of them. Each tourbillon makes a complete rotation each 36 seconds. The double tourbillion concept is meant to increase accuracy, but it is more a visual and mechanical novelty than anything else. I like how the Histoire de Tourbillon retains the exposed ruby jewel bearings that look like little eyes. Then you can make your way down the dial to the watch face itself to the groovy looking yellow hands that remind me of designer traffic signs. The contrast is really good as the hands just pop out. Harry Winston WANTS you to know what time it is with this watch on your wrist. Sadly, only a handful of people will ever have the opportunity to own one as the Histoire de Tourbillon No. 1 comes in a limited edition of just 20 pieces. That also doesn’t take into account the king’s bounty required to buy one of these watches. Well over $100,000 (or double, or triple that) I am sure.

On the back of the watch you have indicators for the time again. This time with three separate disc windows for the hours, minutes, and seconds. It is a cool feature sure, but it doesn’t exactly inspire awe in my reaction. Actually, it is apparently a bit difficult to read the time on the face of the watch, so the rear time indication is there to give you a bit more precision. I am more impressed by the fact that the lugs articulate a bit from the case for a captive fit on your wrist. Who wants to take their watch off to tell the time? Not that the 20 owners of this watch are going to be brandishing around these timepiece investments all the time on their wrists. Images of a watch like the Harry Winston Histoire de Tourbillon don’t really do it enough justice. The partially translucent materials and skeletonization serve to help visualize the movement and motion of the gears. None of this is communicated in still pictures, but I show you the best that I can! Expect more after Baselworld later this month.