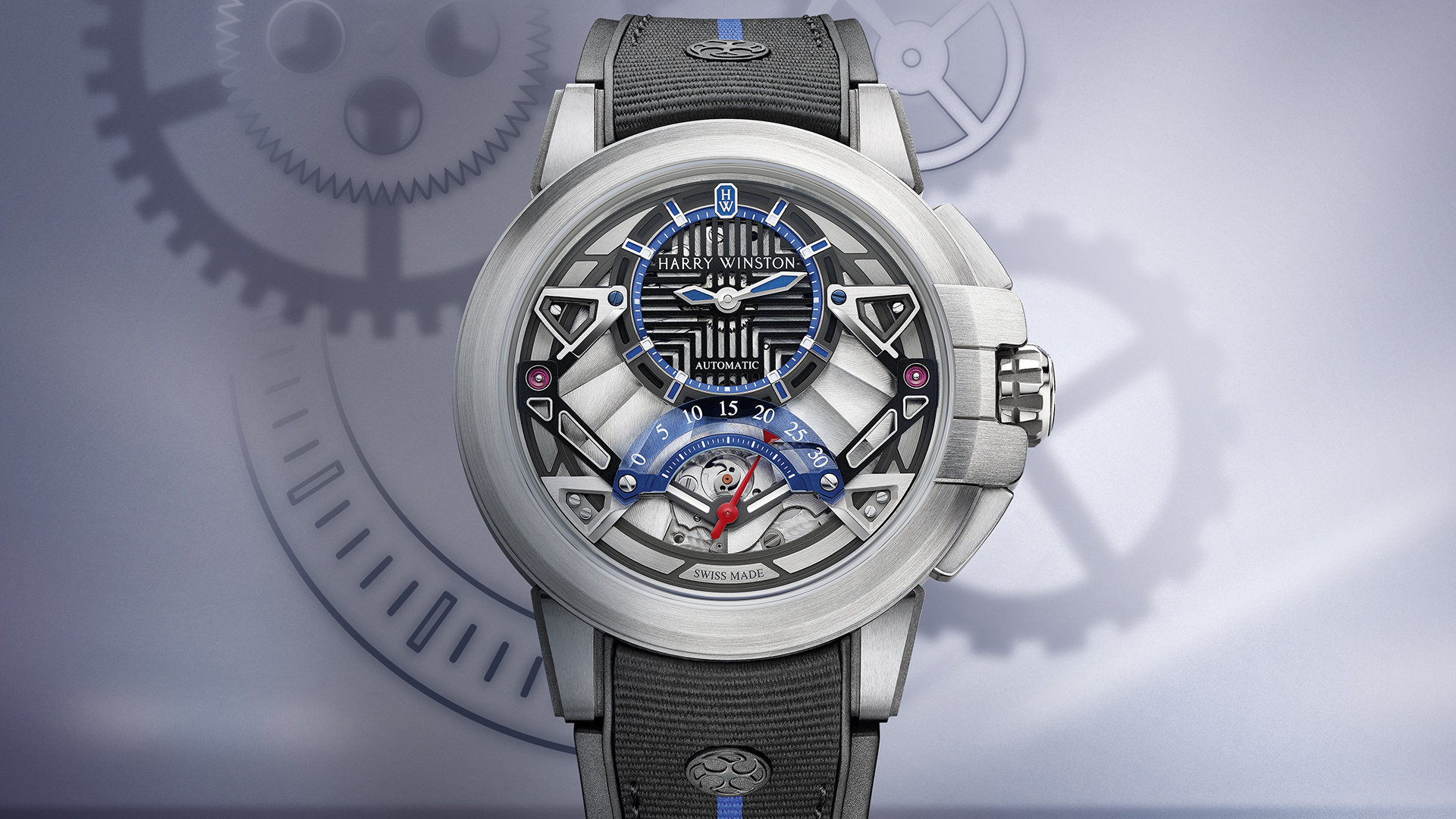 While New York based jewelry giant Harry Winston has a varied collection of in-house watch designs, its sports watch offerings are traditionally few and far between. The brand’s long running Project Z collection is the exception to this rule, providing an aggressive modern style with a focus on innovative materials and unorthodox complications. The latest iteration in the series, the limited edition Harry Winston Project Z14, continues this trend, adding a refreshed skeleton design and an oversized retrograde seconds display to the line’s signature case. 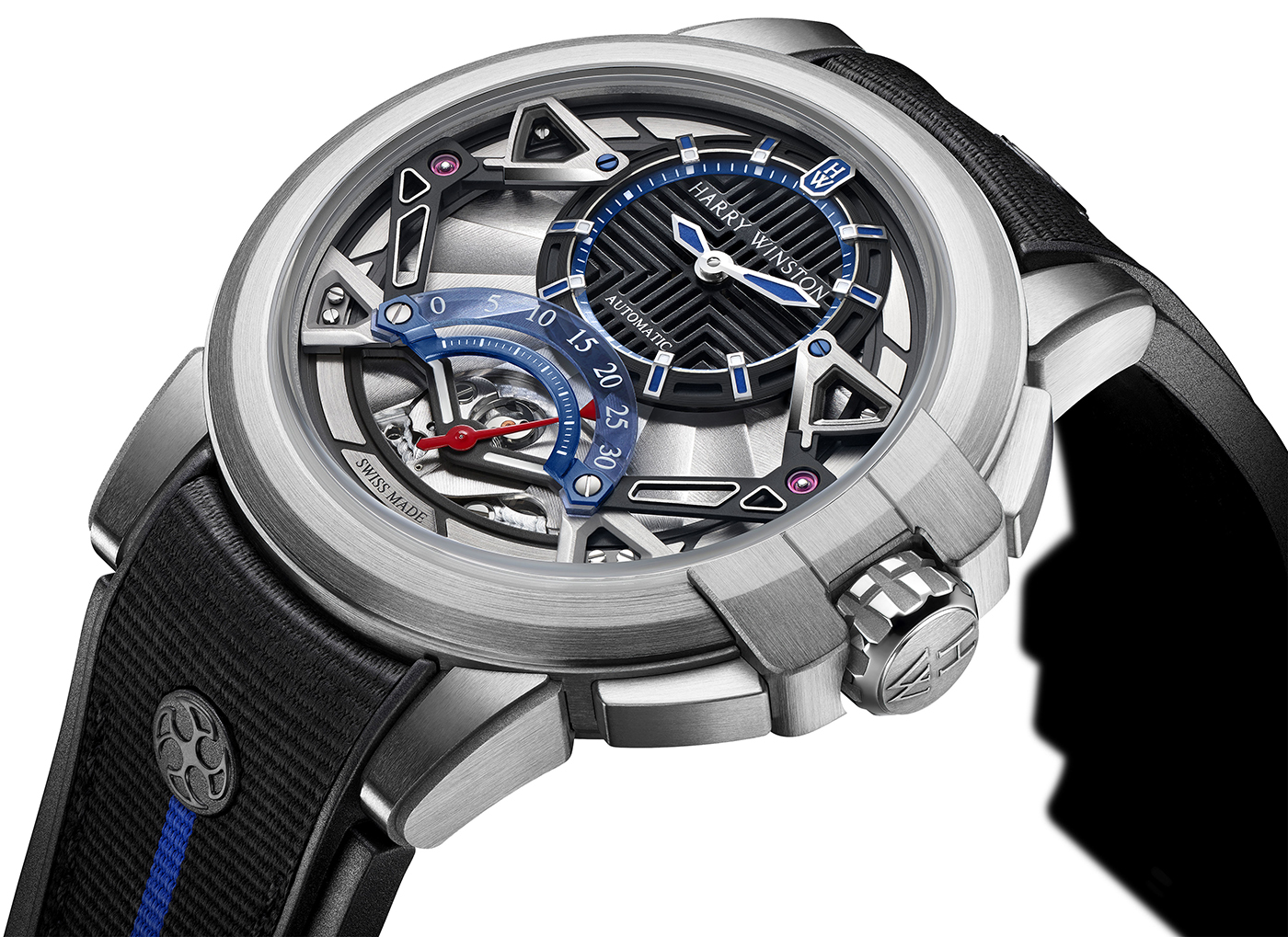 Like previous models in the Project Z series, the Harry Winston Project Z14 uses a 42.2mm case made of Zalium. A proprietary alloy of aluminum and zirconium, Zalium is an exclusive material to Harry Winston that manages to be both lightweight and incredibly durable, with more scratch resistance than titanium. The case form itself is shared with previous iterations of the line, with a bold sloping smooth bezel, wide athletic lugs and a hefty angular crown guard assembly. This crown guard has become something of a calling card for the Project Z line, and while the rectangular protrusions along the 3 o’clock case side look initially to be chronograph pushers these are extensions of the crown guard. Harry Winston opts for an aggressively brushed overall finish for the Project Z14 to highlight the strength and durability of the unorthodox Zalium material. Water resistance stands at a respectably sporty 100 meters. 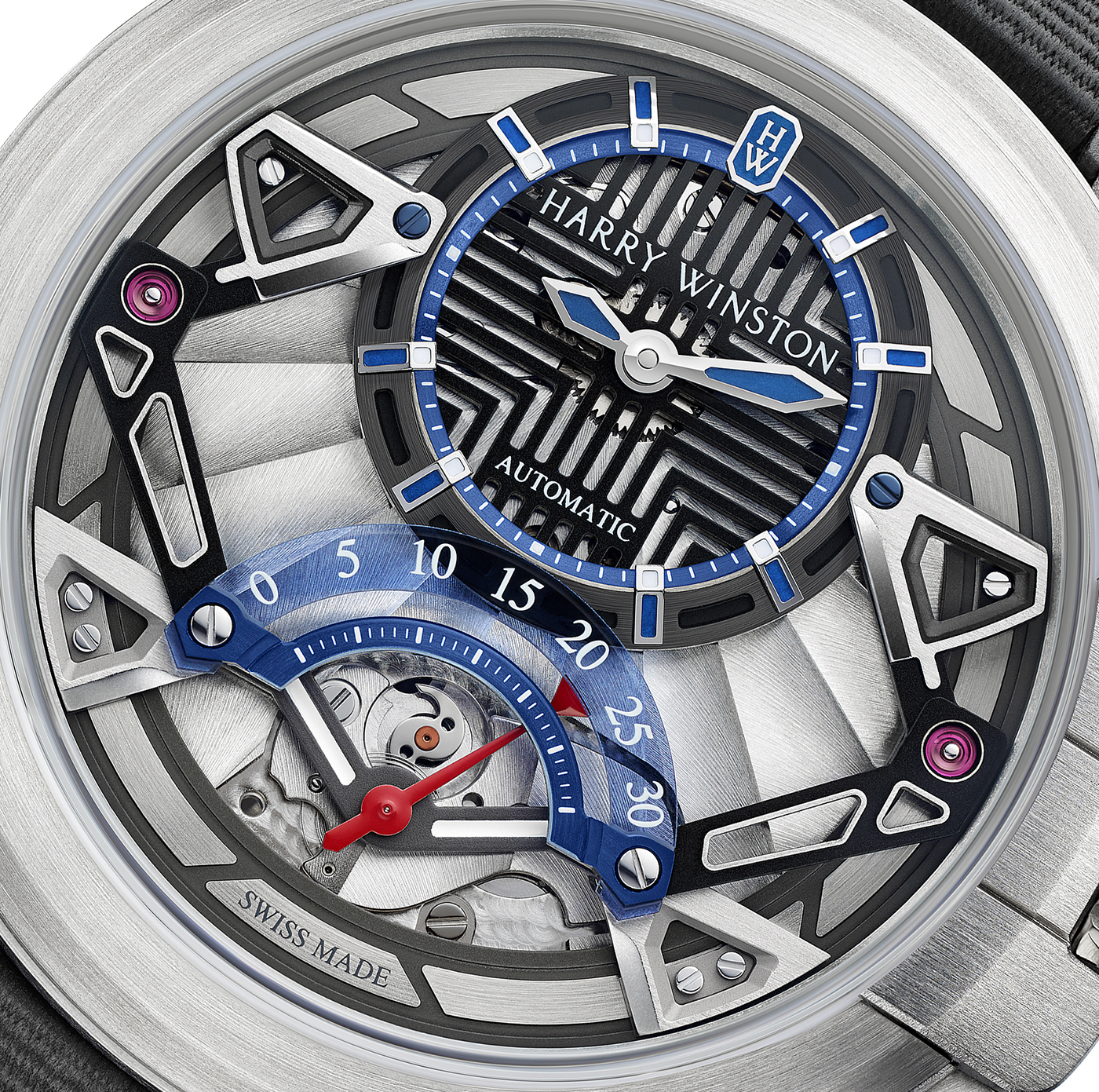 The dial of the limited edition Harry Winston Project Z14 shares more than a passing resemblance with previous entries in the Project Z line, but the brand has focused its efforts on refining the signature look with a simpler structure and greater visual depth. Along the 3 o’clock and 9 o’clock sides of the skeleton dial, the skeleton bridges connecting the various subdials are rendered in a mix of polished and black surfaces, with an angular and elemental high-tech look that moves away from the ornate Manhattan Bridge-inspired truss work of previous iterations. The main timekeeping subdial at 12 o’clock has similarly been reworked with a cleaner, more aggressive edge, adding a sculpted outer chapter ring and tall faceted applied indices to go alongside the new cross shaped skeleton pattern. Crowned with the signature Harry Winston emerald cut shape at 12 o’clock in the brand’s signature blue, the Project Z14’s dial seems in images to place a high priority on impactful use of color. This blue is carried through in the blued screws securing the subdial at 3 o’clock and 9 o’clock as well as the short Roman sword hands, along with the striking transparent blue scale of the retrograde seconds subdial at 6 o’clock. With a shape and color inspired by the archway above Harry Winston’s flagship Fifth Avenue boutique in New York, this subdial should add an extra layer of visual drama with both its retrograde sweep and the vibrant red seconds hand. Outside of the two subdials, the majority of the skeleton dial’s real estate is taken up with a broad movement bridge with radial Côtes de Genève emanating from a central point beneath the 12 o’clock subdial. The effect in images looks like rays of sunlight emanating from the main subdial, a touch that both adds flair and creates a natural center of visual weight for the design. 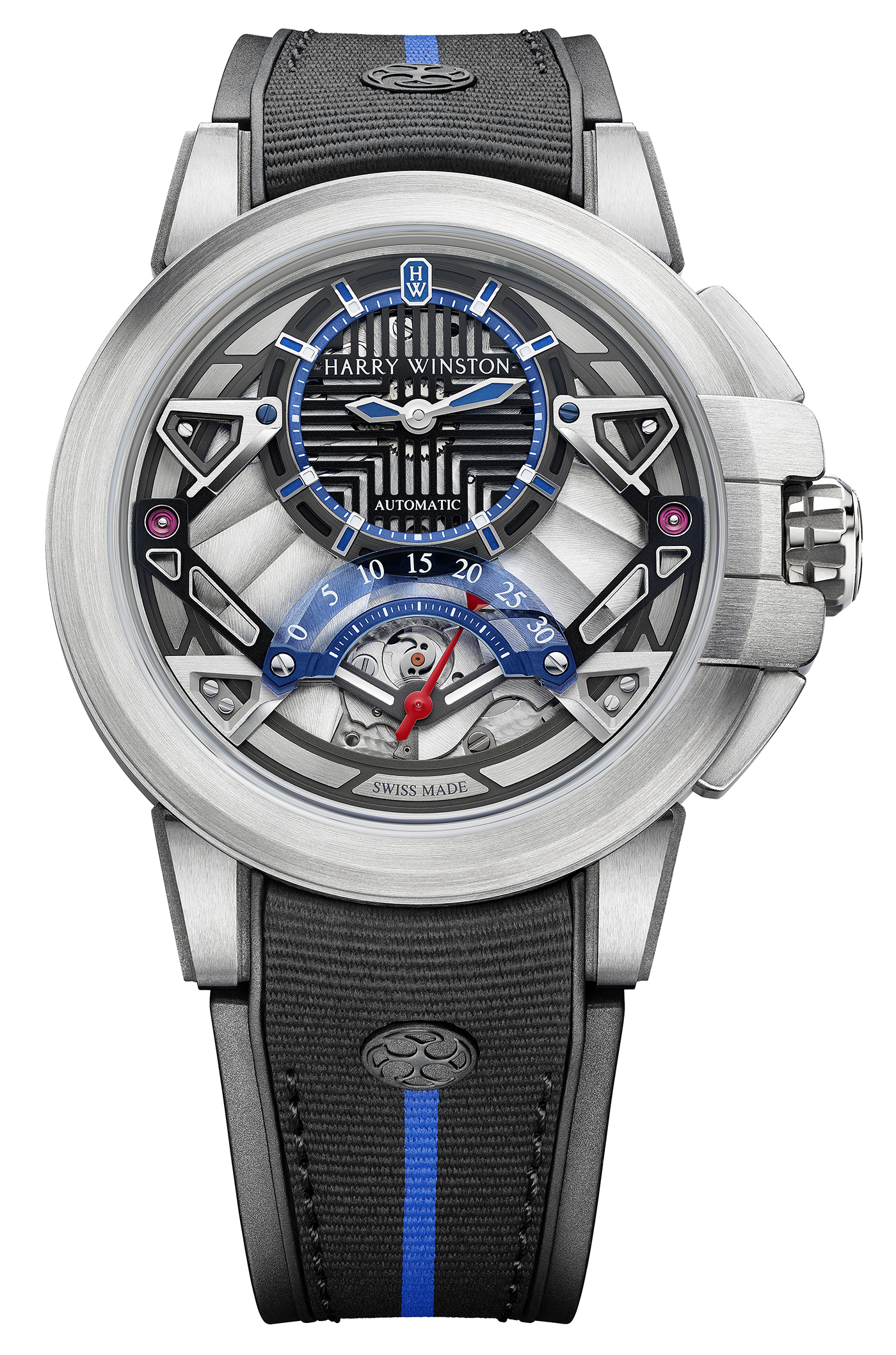 Harry Winston powers the Project Z14 with the in-house HW2202 automatic retrograde seconds movement. In addition to the radial Côtes de Genève visible through the skeleton dial, the HW2202 sports a skeletonized rotor in 18K white gold, along with a silicon balance spring. Performance is respectable, with a 65 hour power reserve at a 28,800 bph beat rate. The brand pairs the Project Z14 with a black textile effect rubber strap, featuring a stepped structure and a prominent center stripe in dial matching Harry Winston blue. The unusual Project Z shuriken emblem is also front and center here, arguably slightly out of sync with the rest of the visual design. 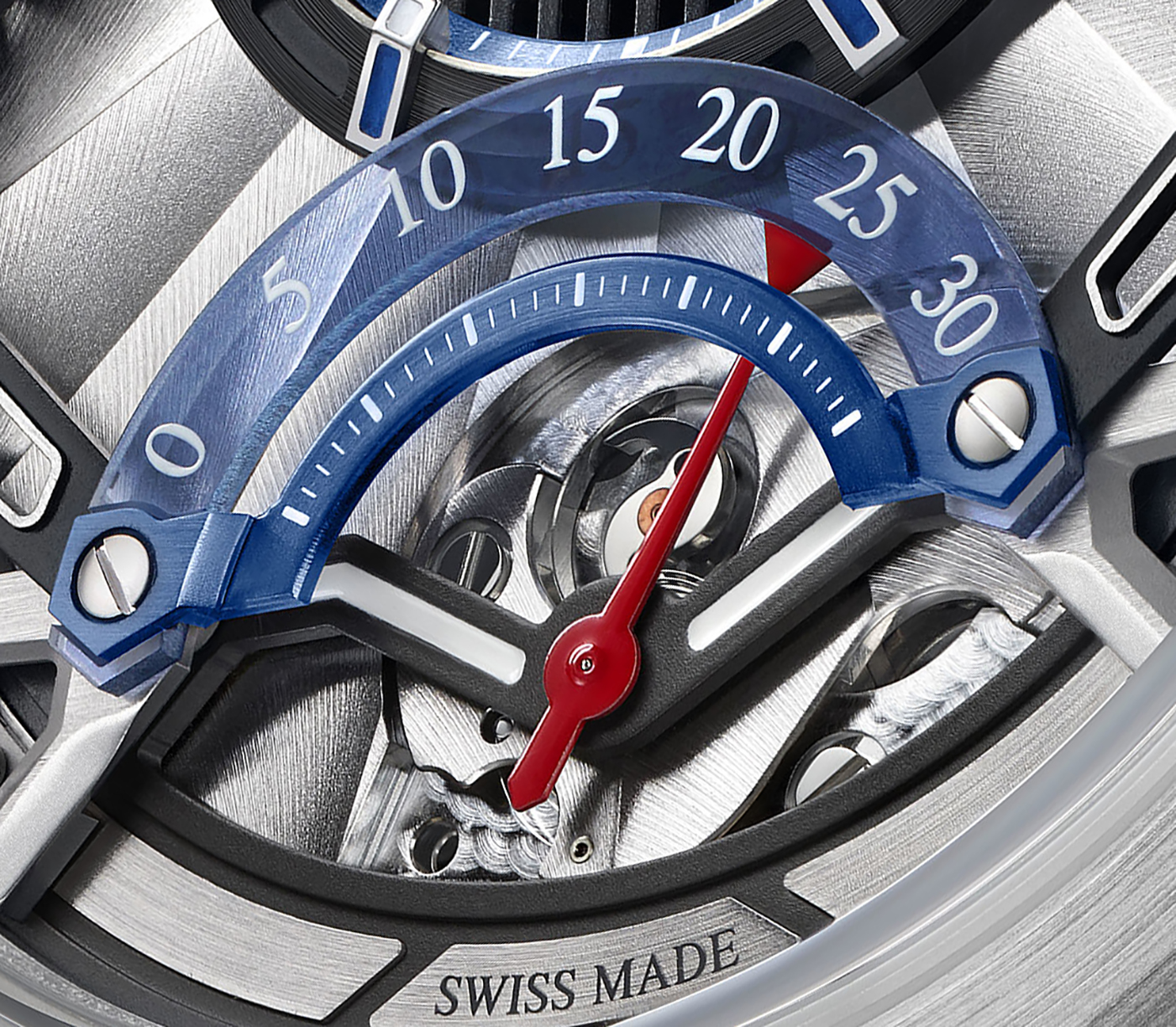