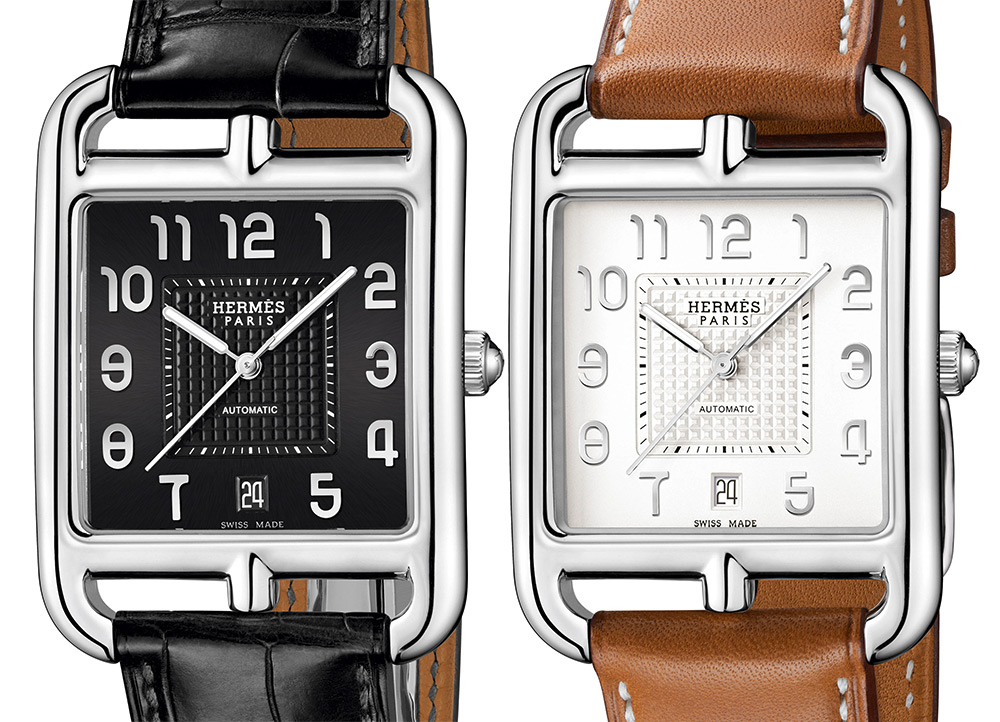 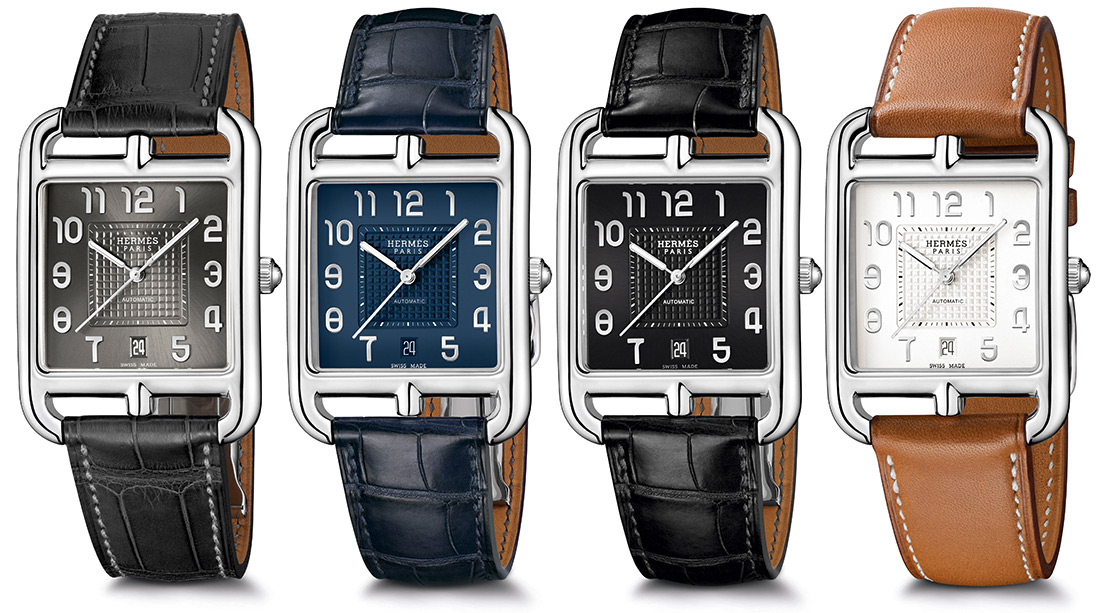 Since the introduction of its first in-house mechanical movements in 2012, French luxury goods manufacturer Hermès has progressively moved to improve upon some of their most established designs while serving up interesting new products. For Baselworld 2017, which is much closer than you think, the brand is introducing a new line of four Hermès Cape Cod watches for men featuring an assortment of dial and strap combinations that deliver a variety of visual updates to choose from. While the Cape Cod design has endured for over 25 years, these new models offer a chance to explore some of these visual updates, while briefly considering where high fashion brands like Hermès fall within the watchmaking spectrum. 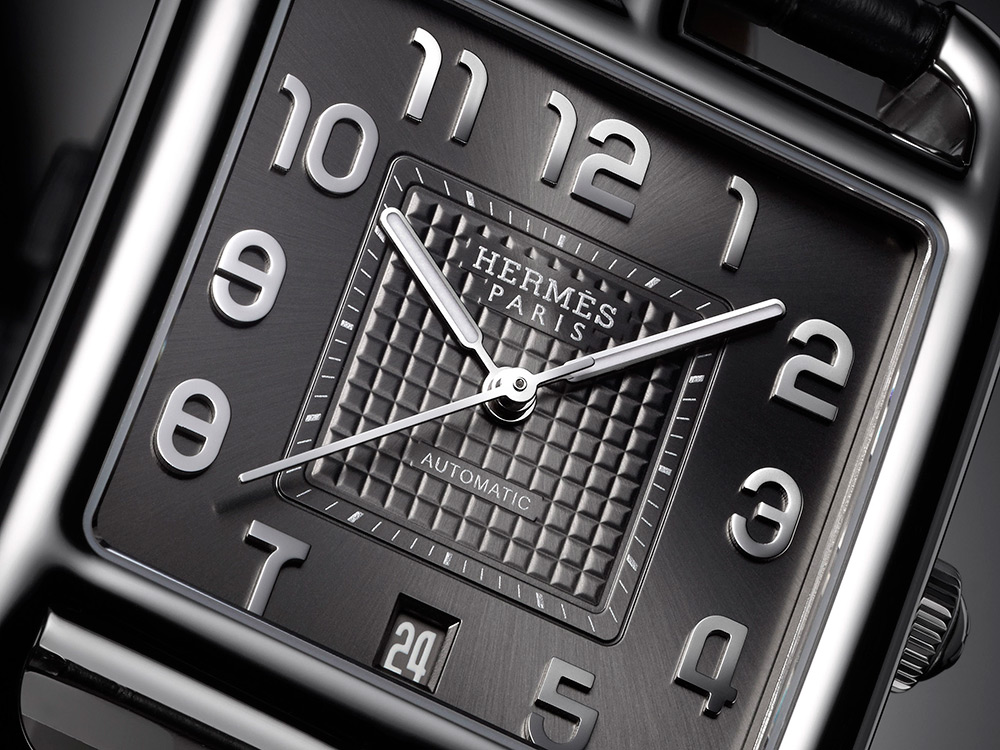 While the debate over fashion house legitimacy in the world of horology rages on, pieces like the Hermès Slim D’Hermès Quantième Perpétuel Platine demonstrate the brand can easily hold its own. When taking a look at the most recent in-house Hermès Cape Cod TGM models, I also can’t help but compare it to another fashion-centric favorite of mine – the Cartier Tank. Still, the new Hermès Cape Cod watches for men bring something a little more youthful and creative to the mix with their “square inside a rectangle” designs and the kind of versatility that centers around some of the best straps and leatherwork in the business. 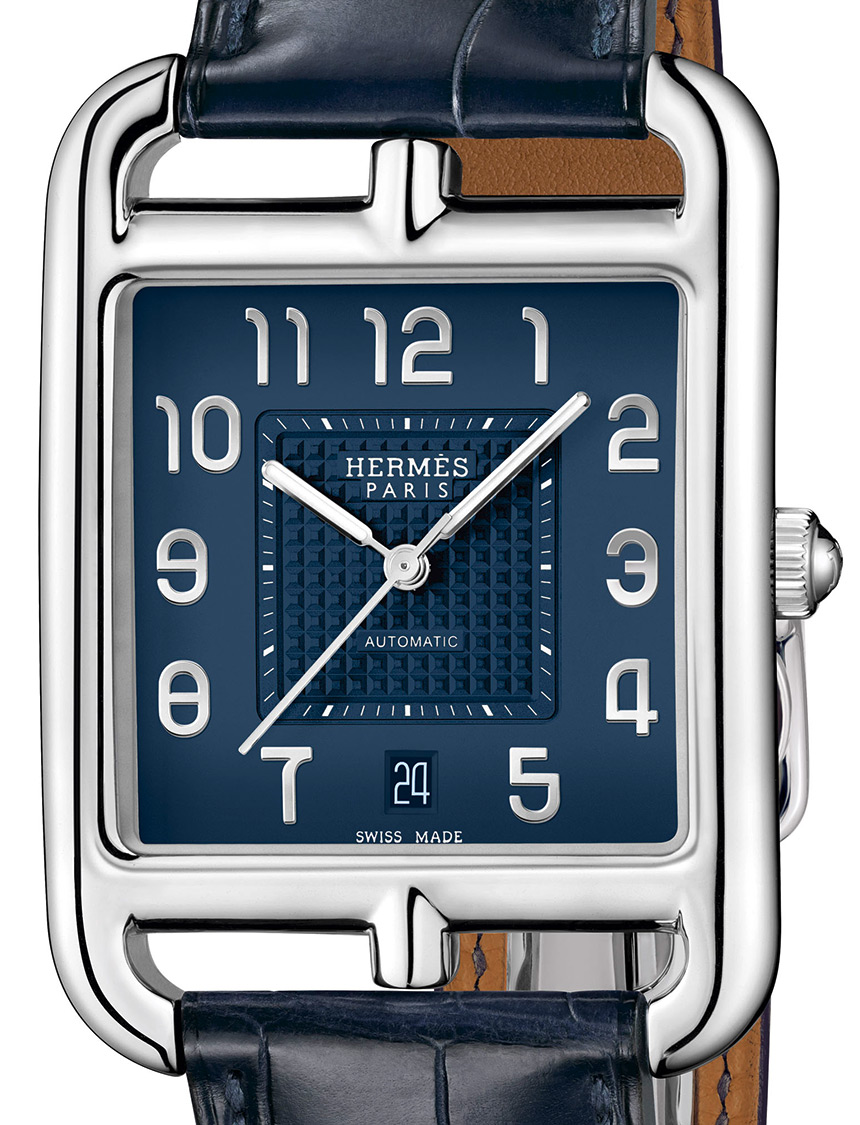 The flagship model of the collection is the Hermès Cape Cod TGM Manufacture. It features a mechanical self-winding movement, and it’s also the most visually conservative out of the bunch. The Hermès H1912 is an in-house 28-jewel automatic caliber that operates at 28,800 vibrations per hour (4Hz), offers 50 hours of power reserve, and delivers a simple time-only display with a date. There’s a range of finishing that Hermès carries out and this includes circular graining and snail patterns on the mainplate along with the brand’s signature “H” engravings on the bridges and the rotor. 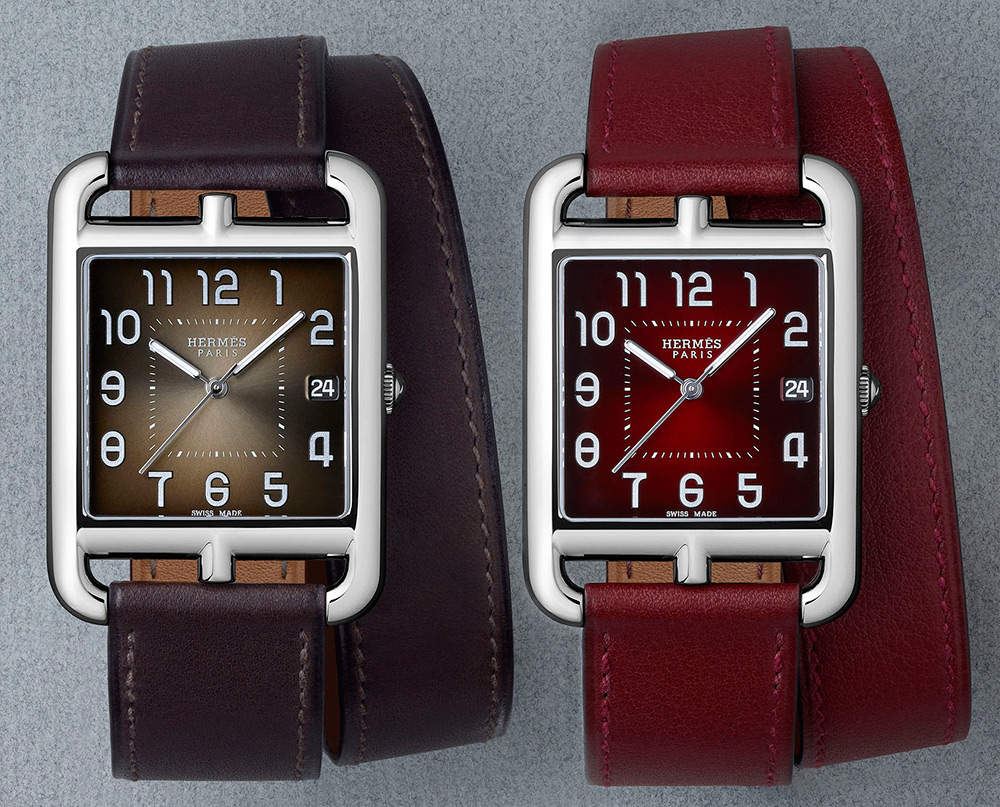 All of the Hermès Cape Cod models feature rectangular stainless steel cases that measure 33mm in diameter. Dial options are plentiful and the Hermès Cape Cod TGM Manufacture is available in blue, black, anthracite, or opaline silvered configurations. Carrying on with its minimal theme, the layout delivers a clean look with rhodium-coated hands, a textured center seconds display, and playful rhodium-coated Arabic numerals that are raised and portray a design that isn’t typical with most watches in this genre. While it’s true that the Hermès Cape Cod TGM Manufacture is the most mechanically interesting in the group, the quartz models bring their own unique flavor to the mix. The Cape Cod TGM Cadran laque, for example, offers a beautifully lacquered dial option (cadran laqué = “lacquered dial” in French) in two graded shades of brown and deep red. 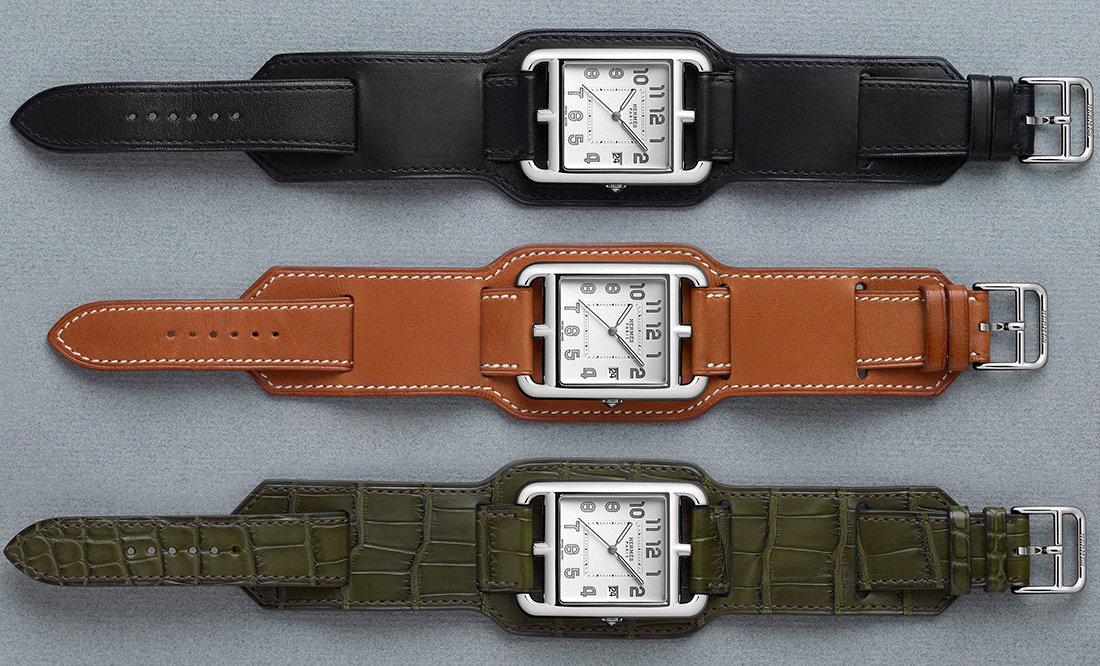 The sportiest of the quartz versions is definitely the Hermès Cape Cod TGM Bracelet de force. Like the TGM Manufacture, it features an opaline silvered dial but it comes on a more aggressive and burly bund strap that’s chock full of the meticulous saddle stitching Hermès is known for. This detailed approach to leatherwork is also present in the Hermès Cape Cod TGM Bicolore, which features a two-tone smooth calfskin strap combining “Malta blue” with “Hermès red” or “étoupe.” 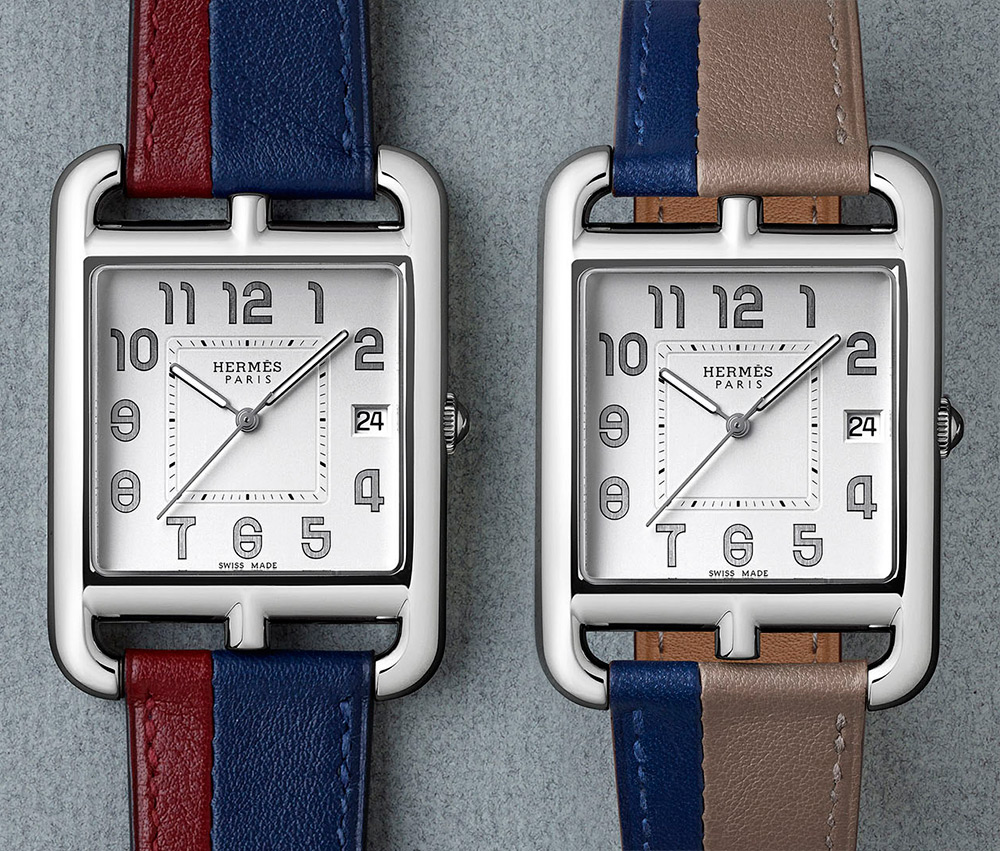 While it can be difficult to move past the deeply rooted discrimination against fashion brands, the latest efforts from Hermès are indicative of a company that is truly pursuing advancements in their own watchmaking story. In 2012, the brand even purchased Natéber S.A., a Swiss dial maker and a large stake in case maker Joseph Erard. These Hermès Cape Cod models offer everything from casual variety to elegant in-house manufacturing thanks to the TGM Manufacture version. Although pricing for the quartz models varies between $3,175-$4,000 depending on strap and dial options, all dial variants of the Hermès Cape Cod TGM Manufacture retail for $6,200 when paired with the alligator leather strap, but the opaline silvered dial version with natural Barenia calf leather is an exception, priced at $5,950. hermes.com