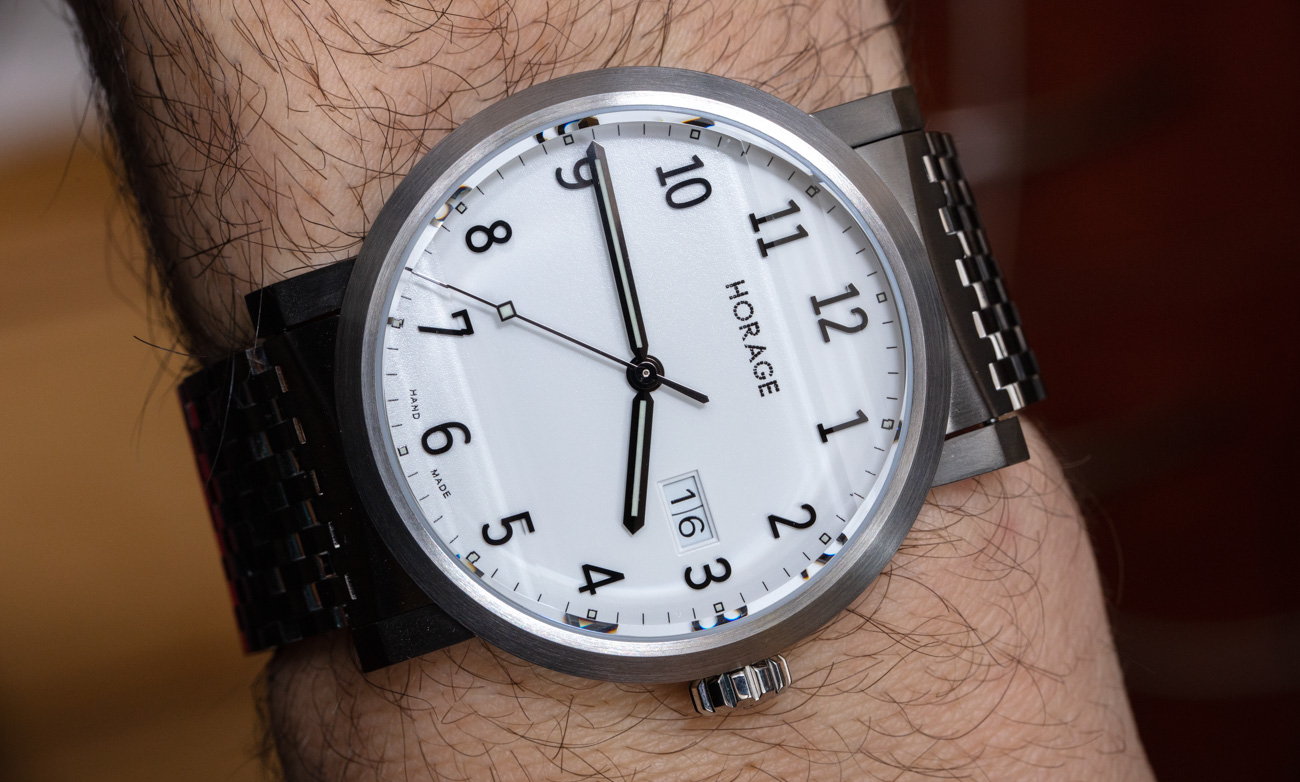 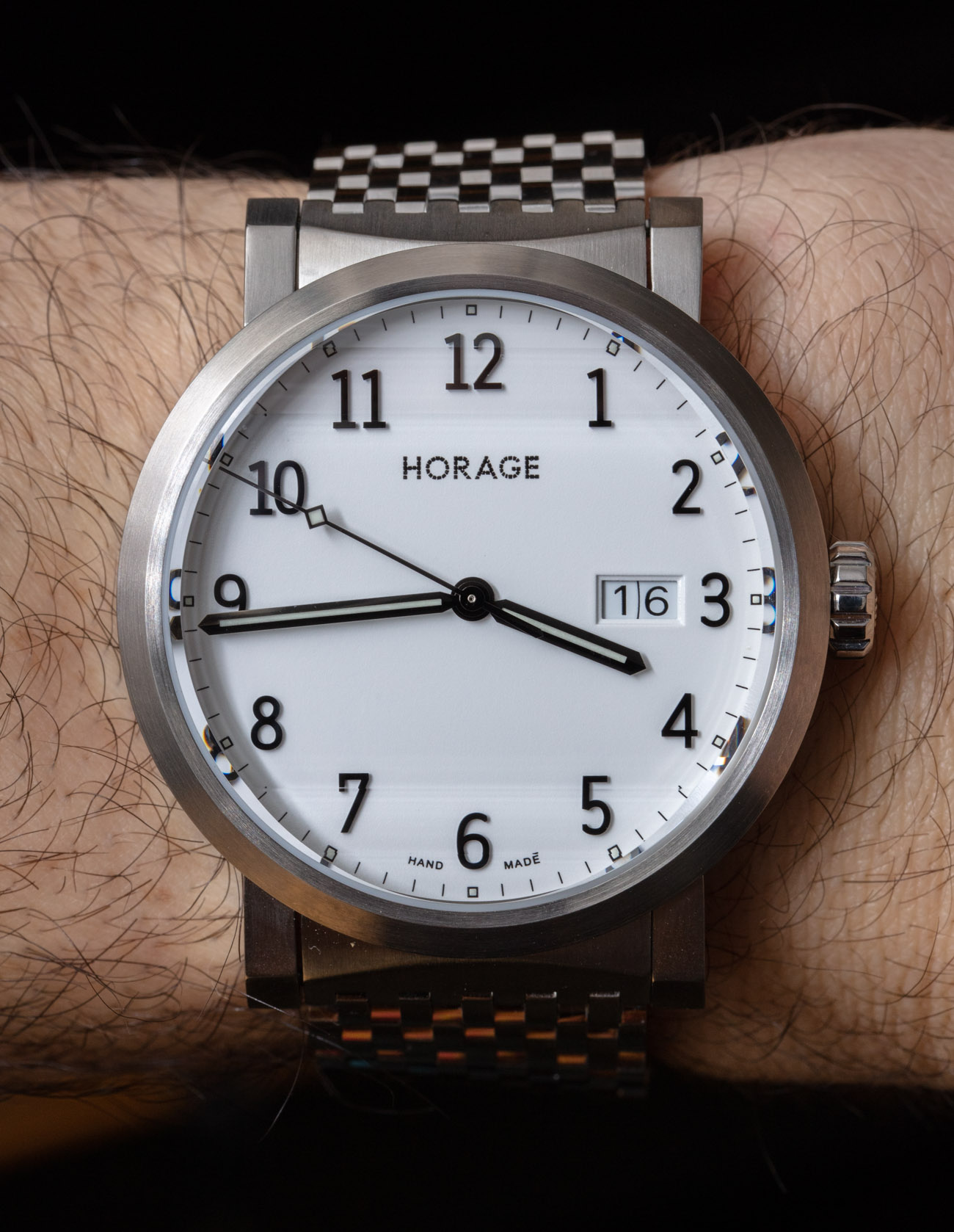 The 1990s and early 2000s seemed to be the heyday of the modern Bauhaus-style wristwatches. While actual Bauhaus as a design tradition is a more mid-20th century concept, neo-Bauhaus (if you will) has had an incredible footprint on modern watch design. Certain brands over the last few years (niche brands, admittedly) made a name for themselves as products from talented industrial designers (mostly German fellows — not a coincidence) who created watch brands. Among these are Xemex, Ventura, and Alain Silberstein. Biel/Bienne-based Horage has a slightly more contemporary offering to add to the neo-Bauhaus wristwatch list and that is its Omnium collection. Today, on aBlogtoWatch, I review the Horage Omnium 40mm, which is joined by a smaller Omnium 32mm-wide version for women.

While Horage is a new brand to many timepiece lovers, it is a very legit watchmaker in Biel/Bienne, Switzerland, and has a number of interesting strengths. One of the things that makes the Omnium attractive is that it includes some rather high-end features for a surprisingly affordable price, the principal feature being the in-house-made automatic movement, which Horage calls its caliber K1. The K1 is a modular movement with five functions, while the upcoming K2 will allow for practically any complication to be added.  The Omnium 40mm has a simpler (yet still satisfying) execution of the K1 in terms of available complications. 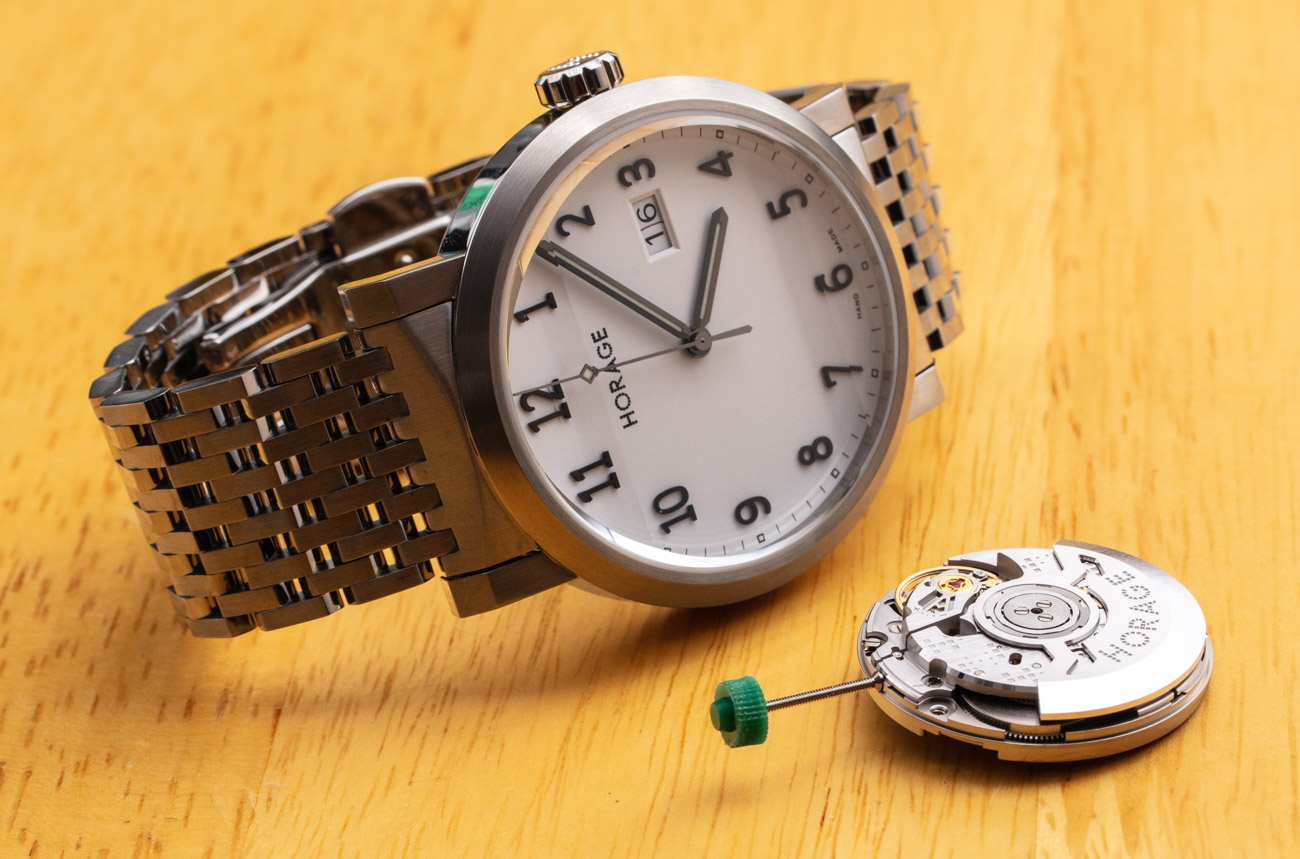 The K1 automatic movement has a distinctive architecture, meaning that it does not look like a close of your average ETA movement. The movement operates at an uncommon 3.5Hz and has a full 65 hours of power reserve. The automatic movement also has a tungsten rotor, which is heavier than most metals and allows for greater winding efficiency. The movement, along with its laser-etched surface decoration, is visible through the display caseback on the rear of the Omnium case.

Functionally, the K1 in the Omnium features the time along with a “big date” indicator (the irony being that this is a rather petite “big date”). A big date indicator is one that uses two discs to indicate the date (as opposed to just one). Such systems are used because they allow for larger numerals. In the case of the K1, a two-disc date display appears to be used for a different reason: Horage wanted a date window that did not require the removal of one of the hour markers. As such, even though there is a date at the 3 o’clock position on the dial, the 3 o’clock hour indicator has space to exist. While I could be wrong, my belief is that someone at Horage hated having to remove the hour marker in order to allow a date display, so they created a solution for it. 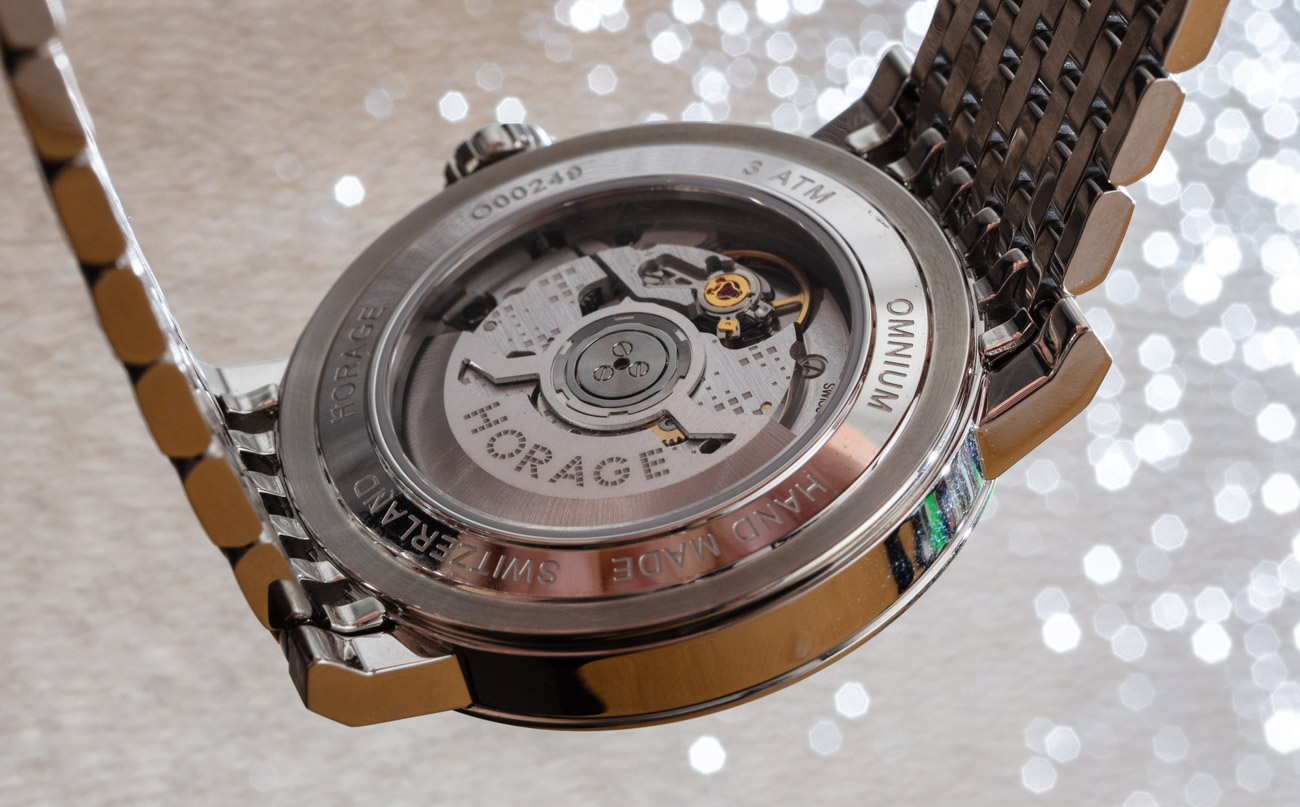 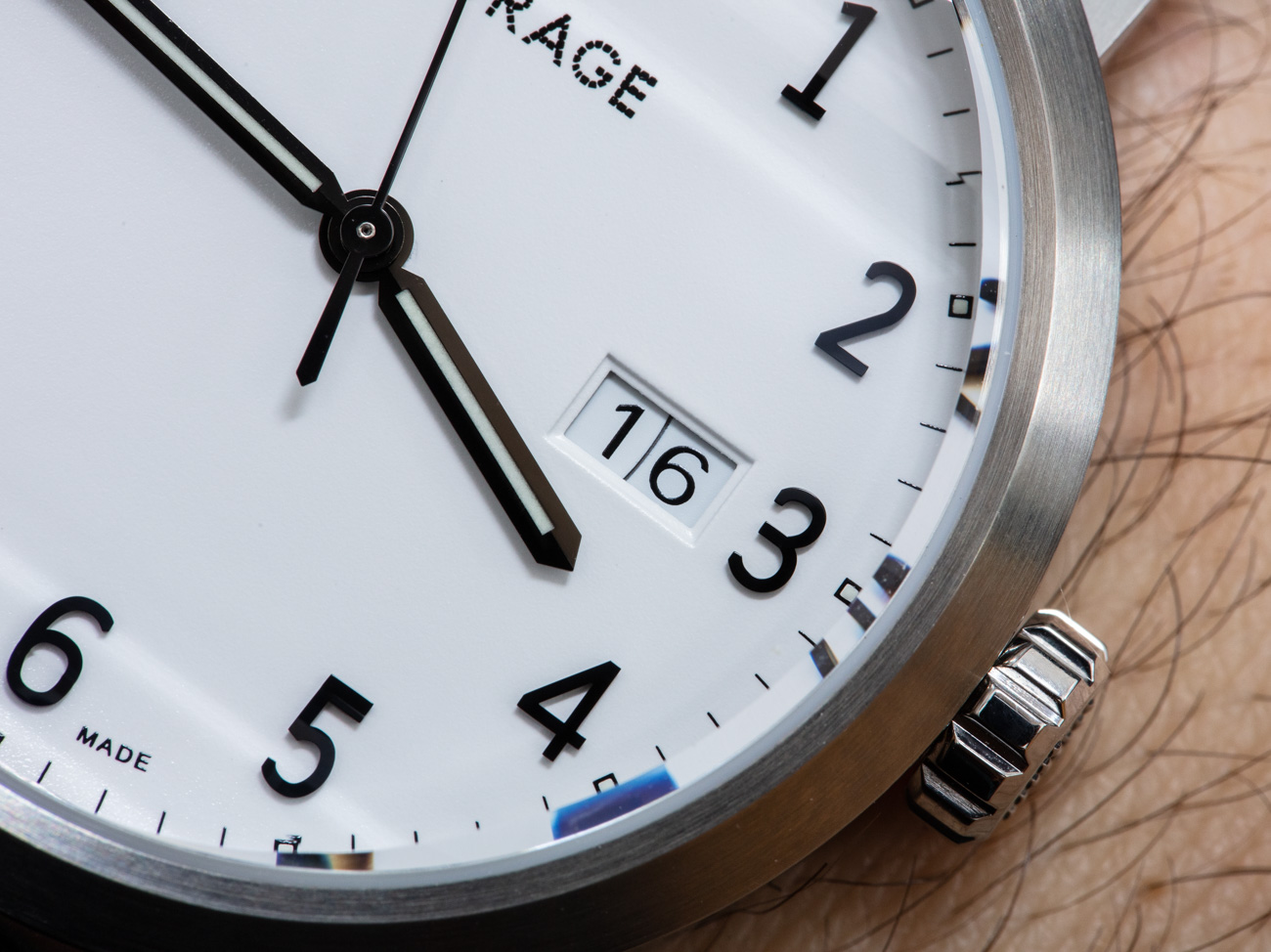 Another noteworthy detail about the Omnium is that the case is produced from 904L steel, which is the same alloy of steel used by Rolex (more or less). This is opposed to 316L steel, which is the more standard form of stainless steel used for most modern wristwatch cases. Using 904L steel theoretically comes with the ability to have a nicer surface polishing, but in reality, I don’t think most people would know the difference between 316L and 904L steel unless these facts were pointed out to them. There is some emotional pleasure in having a watch from the “same steel used by Rolex,” but it is also possible that using 904L steel is more about marketing. That said, 904L does hold a pretty nice polish, so with the right manufacturing process, 904L steel does really shine.

The Omnium case is a good, solid size with acceptable proportions and a lot of wearing comfort, though, for some reason, with my particular wrist anatomy, the bracelet was always either a bit too big or a bit too snug when I tried to adjust the size of the bracelet. This is no fault of the watch and does happen from time to give given one’s personal anatomy. The 40mm-wide case is about 12mm-thick and has a very wearable 46mm lug-to-lug distance. The case is only water resistant to 30 meters, and I would have expected at least 50m or even 100m given the level of detailing the brand puts in the overall presentation. 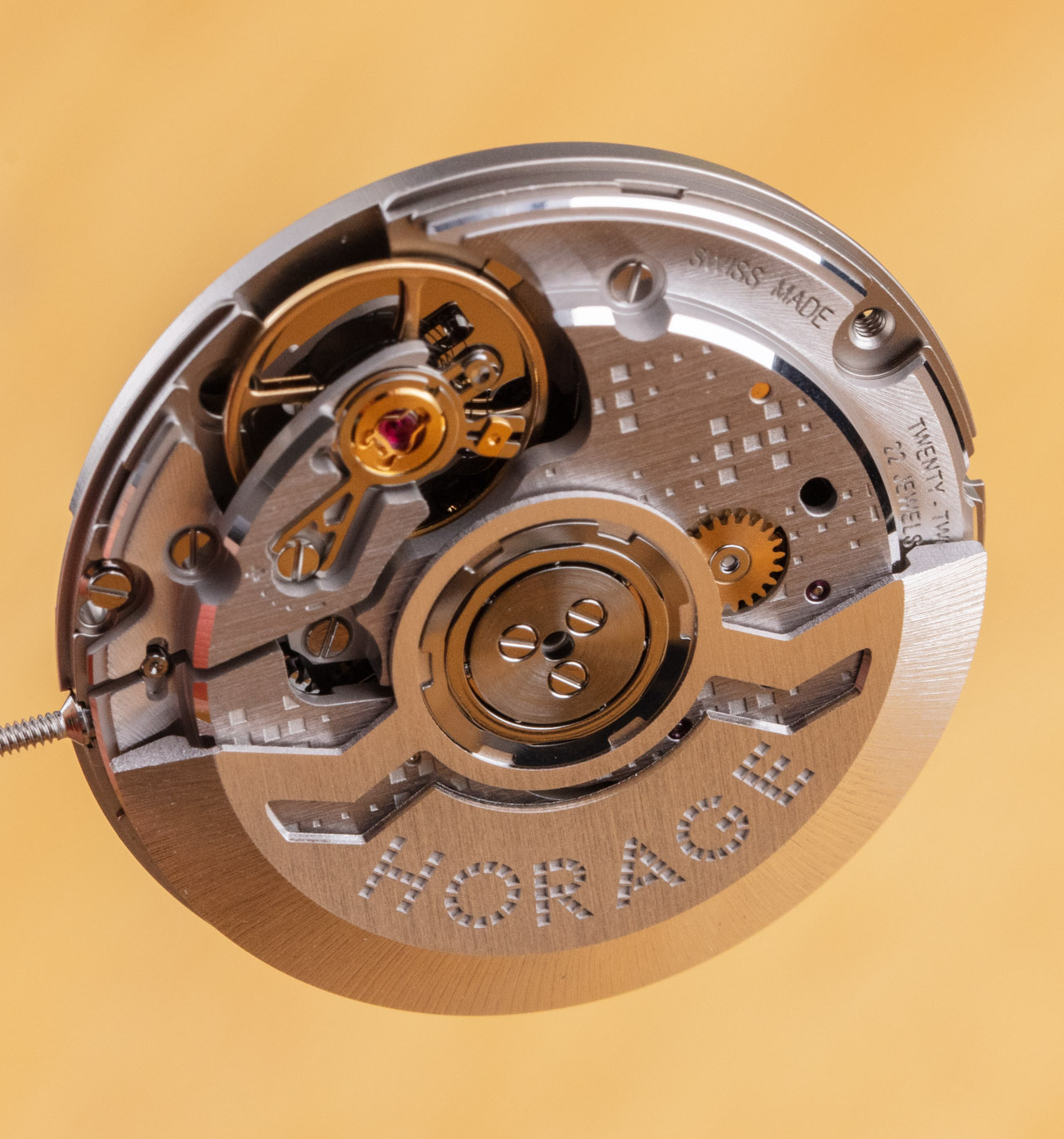 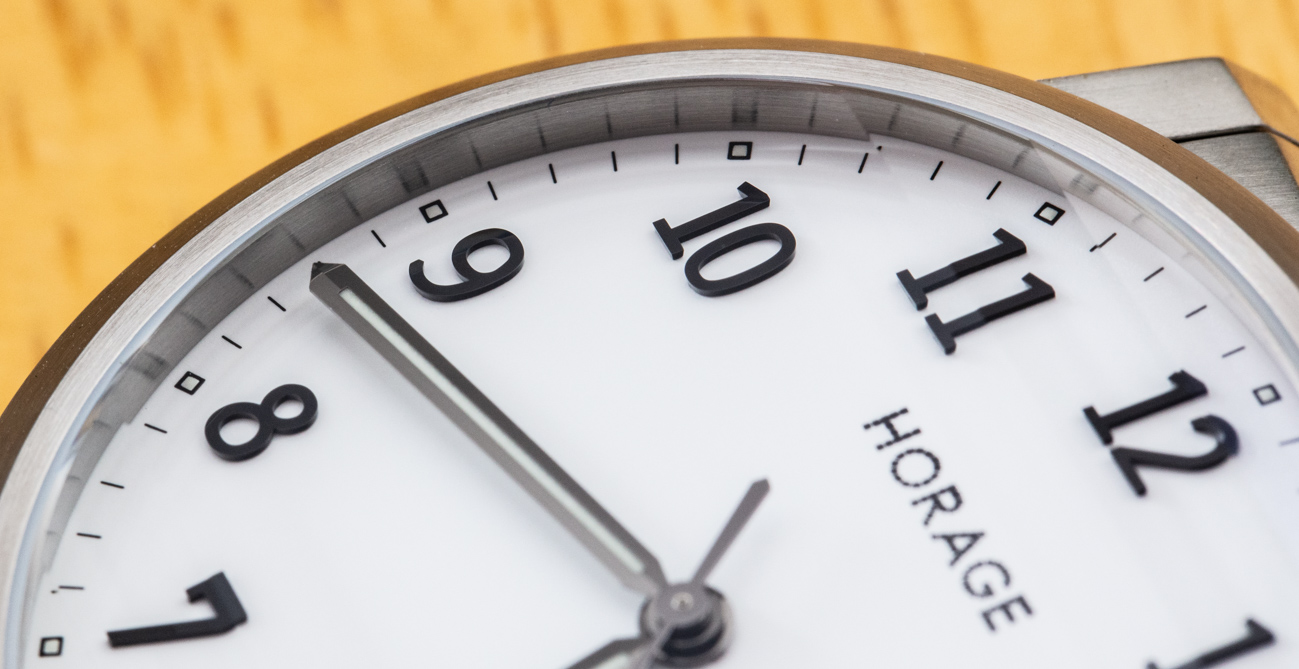 Design-wise, the case isn’t trying too hard, but it does have some interesting lines and visual tricks that make it stand out and not appear just like another round Bauhaus-style watch. I really like the prominent and legible black-coated metal hands, which contrast well against this version of the Omnium’s eggshell-white dial. The hour markers are a bit “wall clock” in terms of their personality, but the overall dial is very easy to read and nicely made.

One of the stranger elements of the Omnium is the two facet cuts in the sapphire crystal. These help add a sense of shape to the overall Omnium composition but are also a bit strange as they create these persistent (but not really annoying) horizontal lines on the dial of the watch. Overall, while I don’t always know what Horage was trying to go for with the lines, I do appreciate the extra personality that they afford the Omnium timepiece collection. 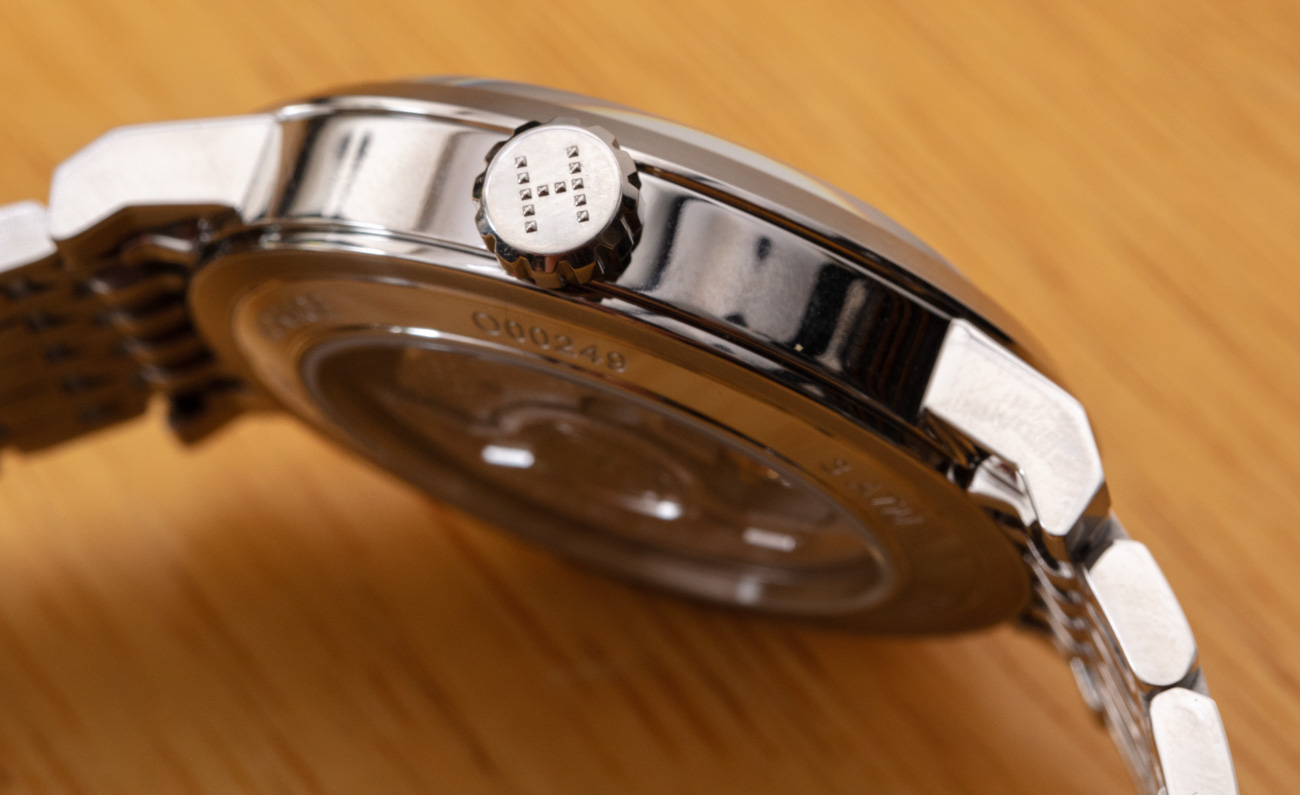 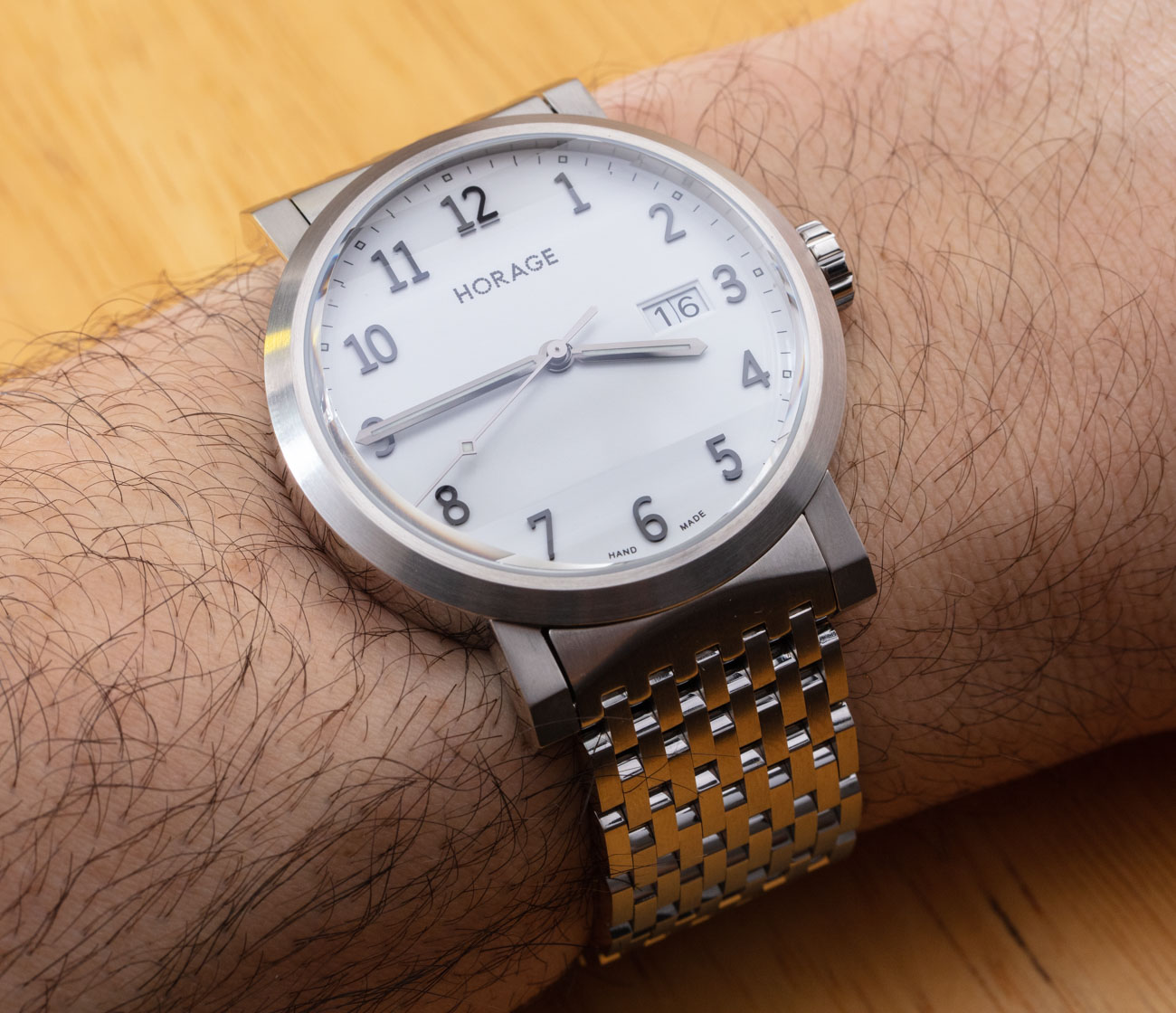 The Omnium dial does have some luminant paint on it, but not that much. The luminant does, however, work better in the hands. As a daily wear, I think the right type of person (a design-loving, watch-understanding, slightly reserved person) might really enjoy the Omnium 40mm.

The available matching steel metal bracelet is super comfortable with the multi-link design. It closes with a simple butterfly-style clasp. The bracelet is also joined with a leather strap option, which also suits the Omnium 40mm watch very appropriately.

As a Swiss Made dress watch for people who like a little neo-Bauhaus in their life and who are romanced by the idea of an in-house movement, there are really few other options than the Horage Omnium, especially for the price. Available with three dial colors and on a bracelet or calf-leather strap, the Horage Omnium 40mm watch has a retail price of 2,900 Swiss Francs.

Necessary Data
>Brand: Horage
>Model: Omnium 40mm
>Price: 2,900 Swiss Francs
>Size: 40mm-wide, ~12mm-thick, ~46mm lug-to-lug distance.
>When reviewer would personally wear it: As neo-Bauhaus dressy or formal watch that allows me to have a decent conversation with another “watch guy.”
>Friend we’d recommend it to first: Lover of underdog brands with good intention and seekers of value despite wanting a real luxury timepiece.
>Best characteristic of watch: Manages to create a nice niche for itself, though it is the type of watch which requires that people discover it, versus being able to immediately romance potential consumers. Dial legibility is good. For the money, good fit and finish overall. Caliber K1 movement is a plus-factor.
>Worst characteristic of watch: Horage itself doesn’t really explain the genesis story of the Omnium watch, which probably prevents people from understanding it as well as they might. Sapphire crystal facets are quirky-cool to some, perhaps annoying to others.