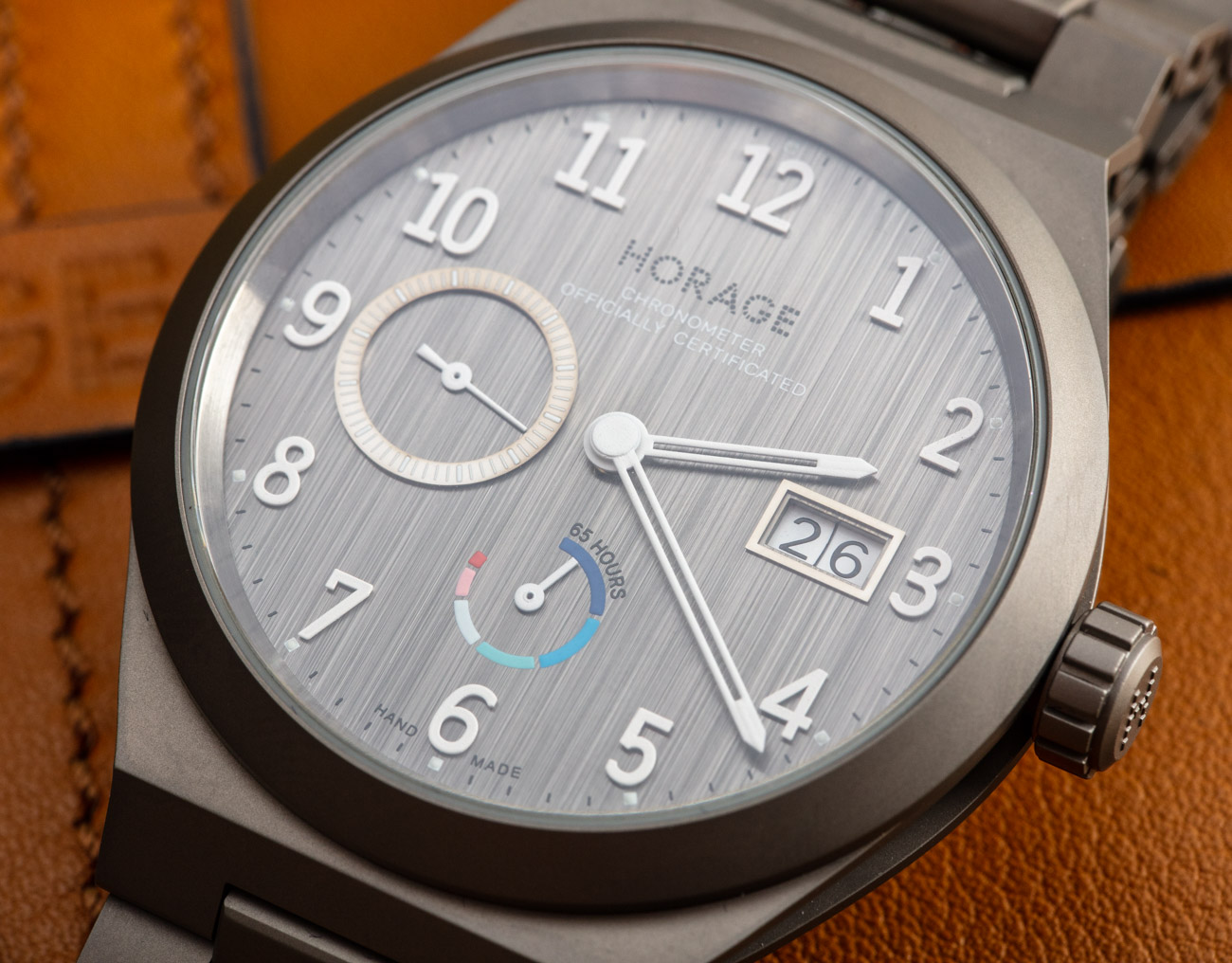 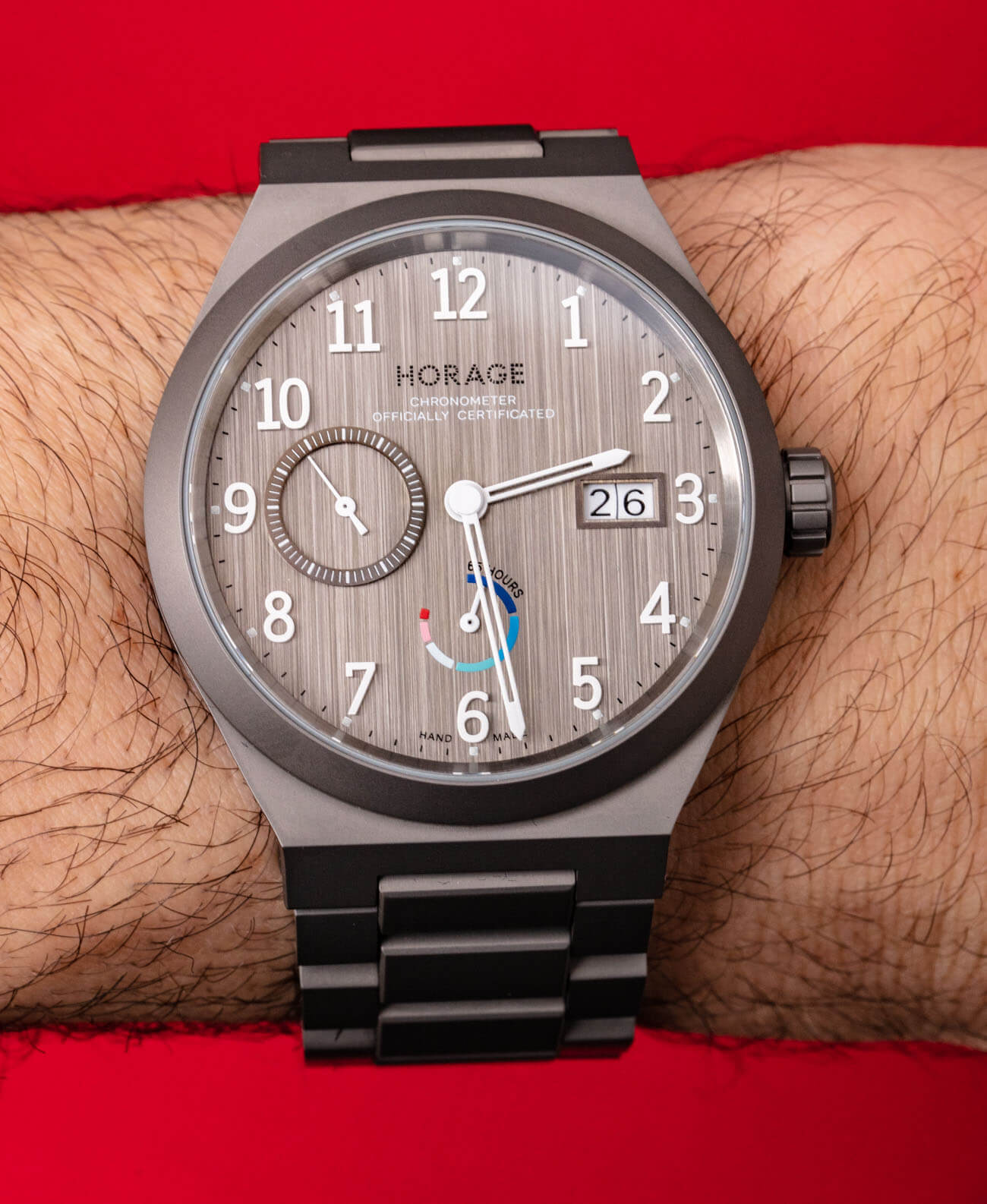 Bienne/Biel-based Horage released the Autark 10 Years limited-edition watch in order to (you guessed it) celebrate the 10th anniversary of the Swiss watchmaker. That said, most watch enthusiasts still haven’t heard of Horage, which will soon change as Horage and the people behind the brand assert themselves in the modern horological landscape. One way to think of Horage is as the in-house brand of The Plus, which is a larger company dedicated to both producing watches for third-party clients and being a watch movement maker. The Autark contains The Plus’ caliber K1 automatic movement (with one of a series of available complication modules), which exist in all Horage timepieces and are available to third-party clients who are looking to acquire Swiss movements, as well.

The people behind Horage are engineers and watchmakers. They pride themselves on good quality, solid construction, and fair pricing. The crew there is currently in a “look and see what we can do phase,” hoping that both the watch industry (as prospective clients) and enthusiasts (as prospective end-consumers) take notice of what they are doing and agree that few companies out there exist that offer a hands-on approach as well as a full suite of manufacturing and design solutions. Horage timepieces are meant to highlight what they can accomplish, while also remarking on the team’s tastes as a watchmaking crew out of Zurich. 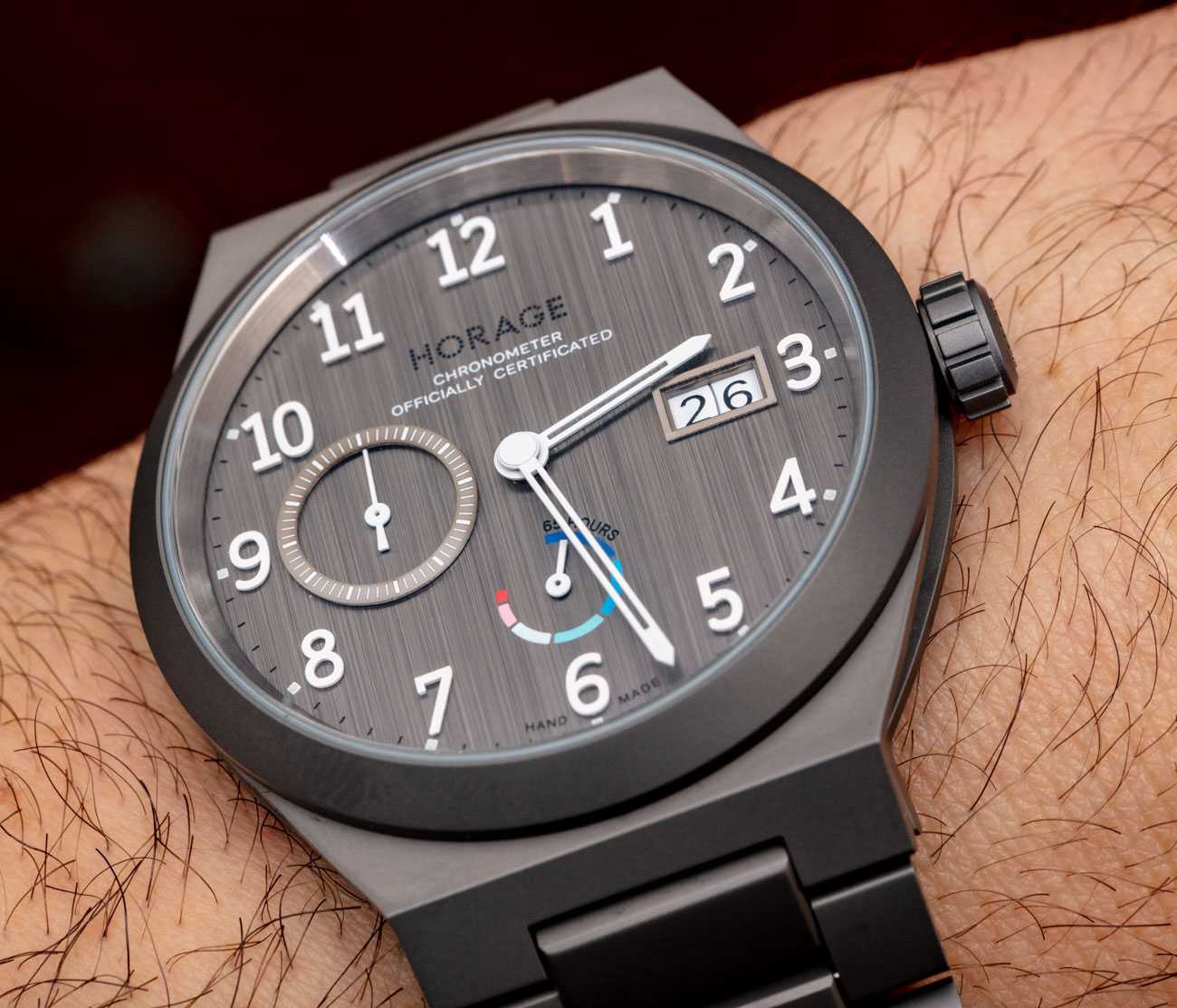 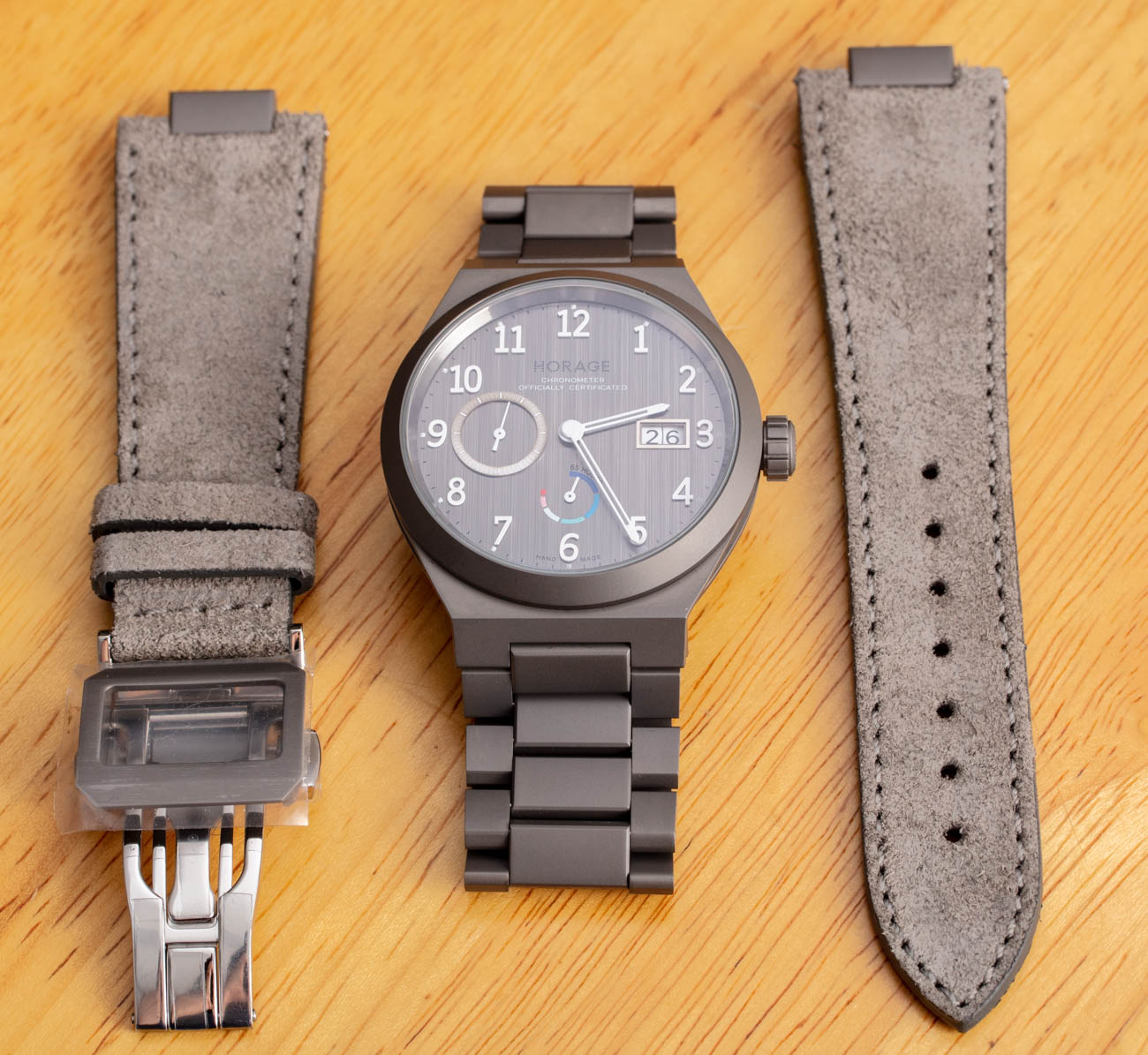 I didn’t appreciate the Autark fully until I wore it for a while. Without seeing the watch in person, it can come across as a bit derivative, even though it doesn’t actually seem like any other watch on the market aside from the Gerald Genta-esque integrated lugs with bracelet. I see the watch as a foundation, a platform, if you will, that allows Horage to show off what it can do. In a sense, the dial reminds me of the straightforward dials ETA or similar companies use to show off their movements in basic-looking cases with ETA-branded dials that are legible and classy but not yet fully “designed.” As I said, the Horage Autark almost yells with potential when it comes to having the designer sex appeal of an Audemars Piguet or Cartier. As is, the Autark is a very competent, legible, well-made timepiece for those seeking minimal fuss and conservative looks. The price is also a compelling selling point, given what you get in the watch.

Horage produces a  standard Autark model that is a bit different in some ways from the “10 years limited edition.” The bezel is totally smooth, as opposed to being cut with small notches. The titanium case is hardened and bead-blasted instead of brushed. And the face itself is different — brushed and then given a deep gray anthracite tone that contrasts well with the applied white-colored Arabic hour numerals and matching white hands. 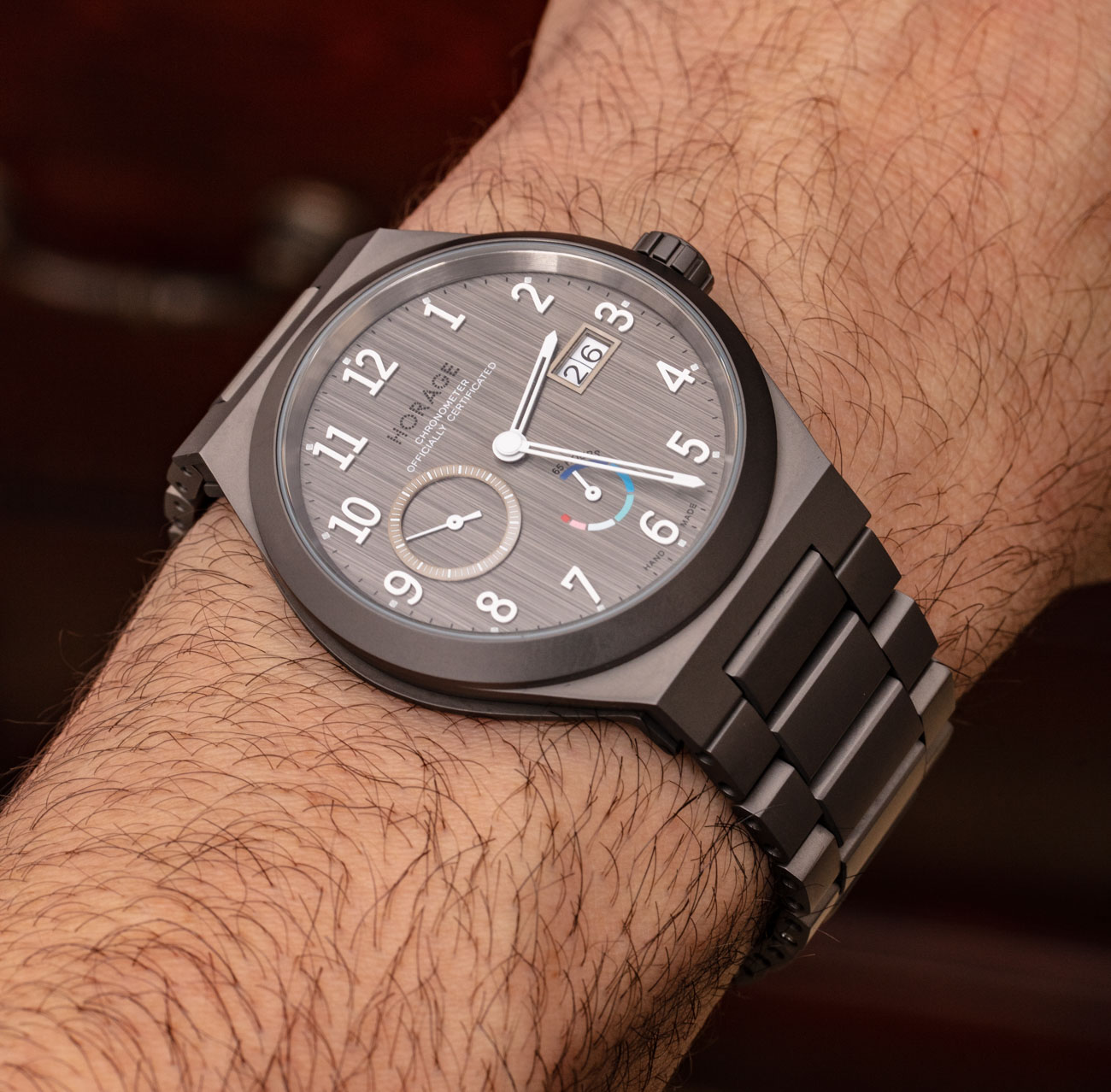 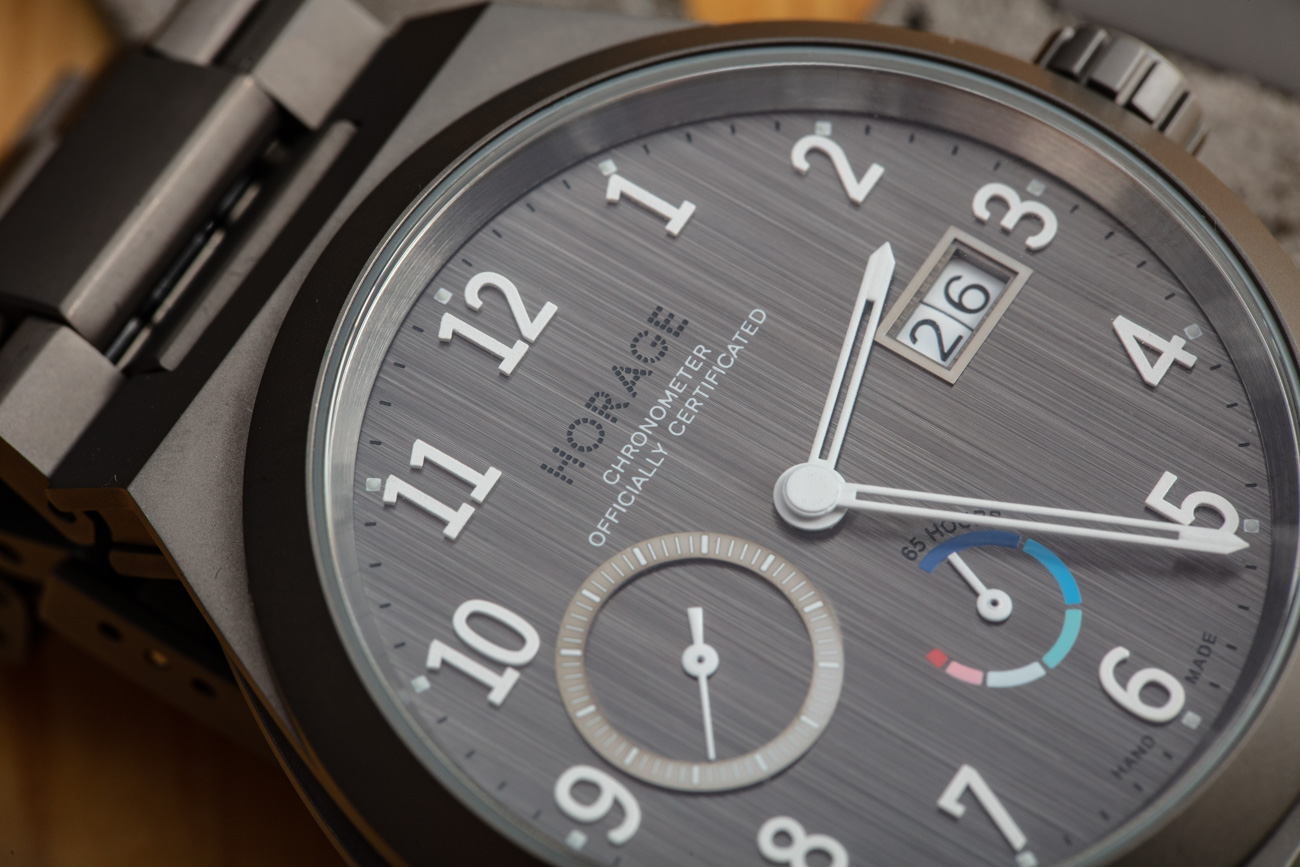 The bead-blasted dark titanium case offers a very masculine and industrial look. It isn’t flashy at all, but one might think of it as “engineer chic.” It is quite modestly sized at 39mm-wide and just 10mm-thick with 100 meters of water resistance. The lug-to-lug distance is about 48mm. The case is very lightweight and feels solid. I do want to say that the bezel slightly extends beyond the edges of the case on the sides by maybe one fifth of a millimeter or so. That probably means the side of the case is not perfectly round but is a bit more tonneau in shape. None of this is easy to tell, but it is a minor refinement issue that I am sure Horage will work on, eventually. I wouldn’t consider this to be a reason not to get the watch, as it doesn’t affect how it wears or performs.

Horage throws in a secondary strap along with the three-link titanium bracelet. The strap is a nubuck-style leather strap that elegantly tapers. Since I am pretty adamant about being a watch bracelet guy, I would probably never swap an otherwise decent (different story if it isn’t comfortable) bracelet for a strap out of personal preference. The bracelet has a proprietary deployant clasp with a push-button release. The deployant works very well but is somewhat generic in its style. Also, to me, the highly polished titanium clasp system visibly contrasts with the darker, bead-blasted titanium of the rest of the watch. I would have preferred for at least the extending pushers that open the clasp to be of matching bead-blasted finish and color. Again, this is a minor quibble and is probably subsumed by the overall good quality of the deployant clasp (which even very expensive brands are prone to screw up much of the time). That I have had no issues opening and closing it securely is a testament to the clasp’s performance. 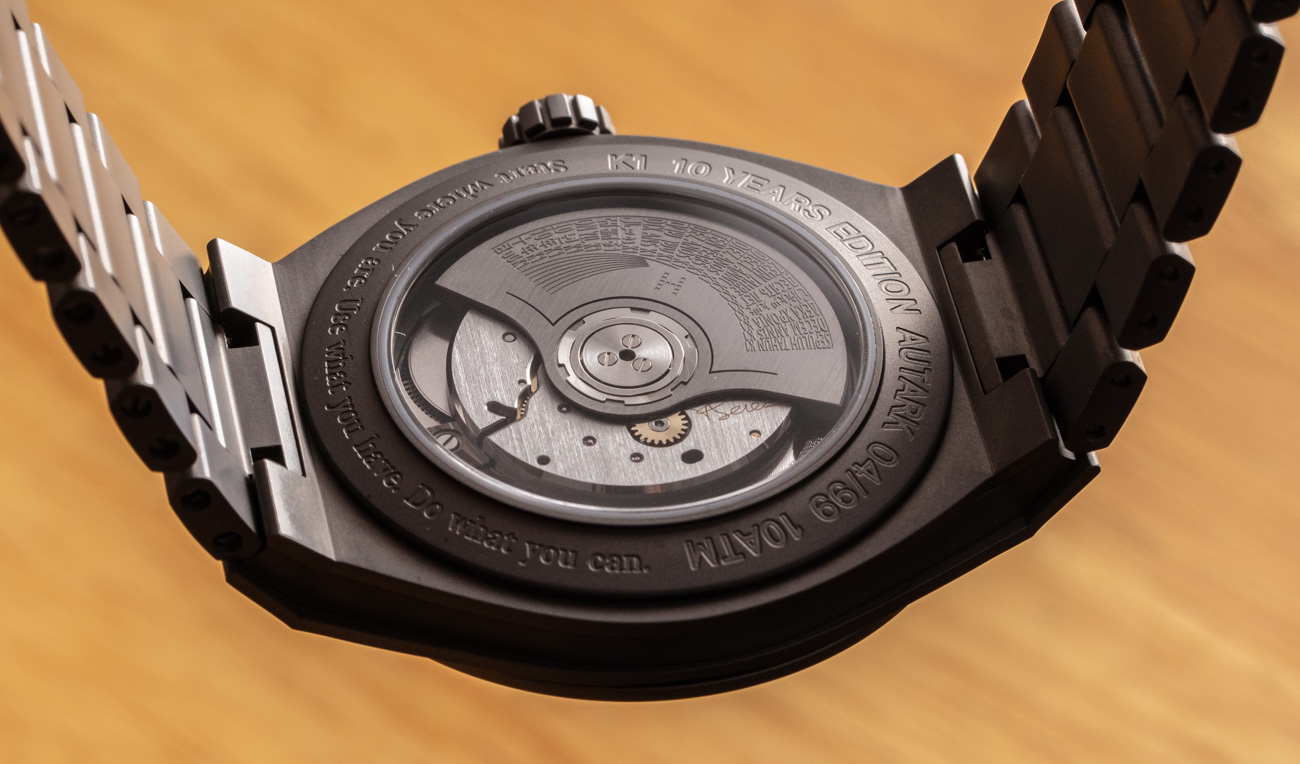 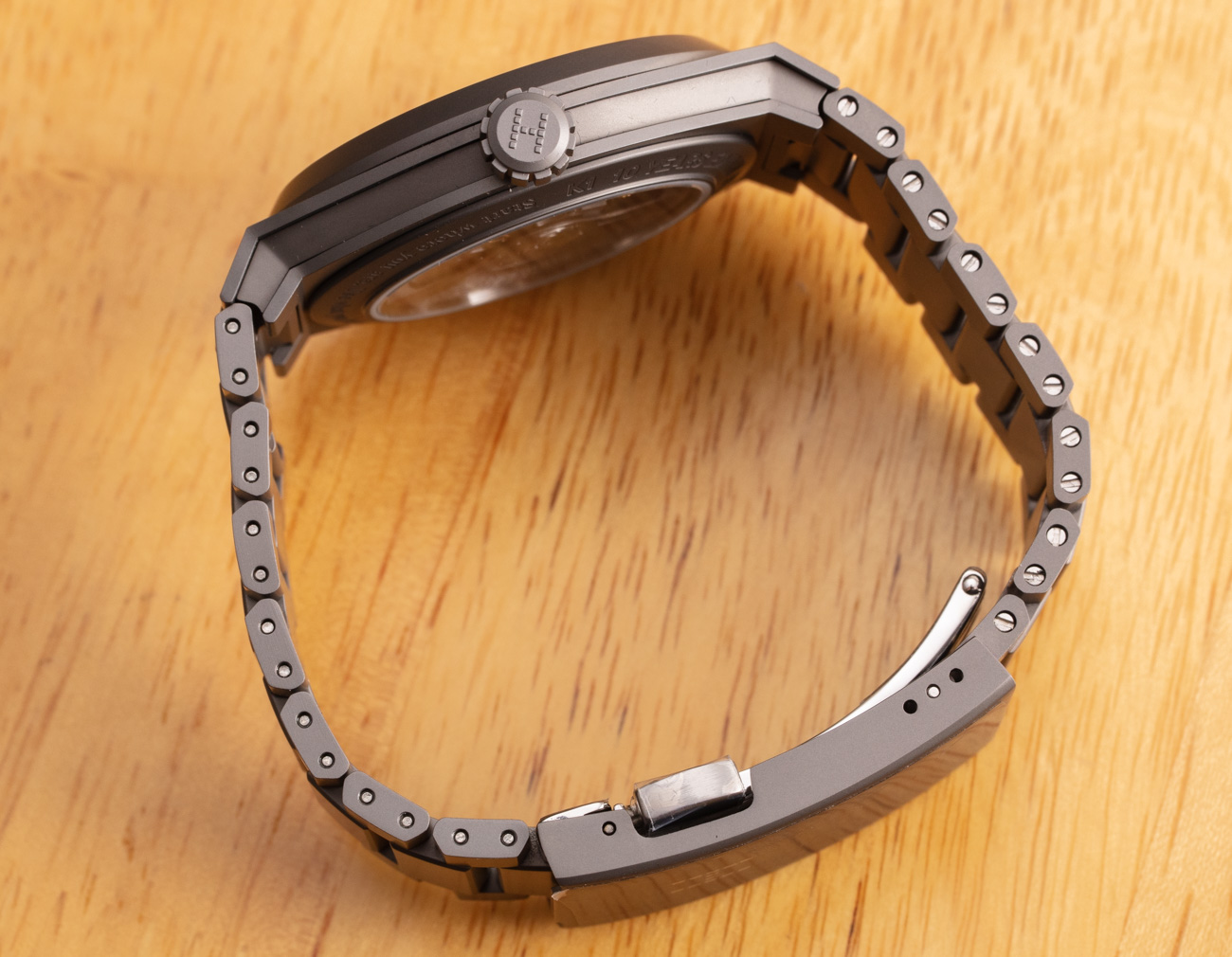 Over the dial is a flat, AR-coated sapphire crystal that offers no issues with glare. Another crystal over the rear of the watch offers a view of the movement — which is also given an anthracite treatment for the rotor and the main bridges. The automatic rotor itself has some very small engravings that are supposed to say “10 years” in 19 different languages. This reminds me of the text that we often find on some Greubel Forsey watches. The automatic rotor itself is in tungsten. Why? For weight purposes, mostly  and– tungsten is more affordable than, say, platinum. The heavier the rotor, the more efficiently the watch will wind. I want to report that while wearing the Autark, I found that the K1 movement, indeed, wound very efficiently (meaning quickly), as evidenced by the colored power-reserve indicator that I kept an eye on.

The K1 movement is an interesting mechanism, and if you would like more details, Horage has an entire page dedicated to it on its website. That makes sense because the K1 movement is both highly customizable and also for sale to those who would use it in their watches. What I like about the K1 movement is that it is anything but generic. This is no ETA clone. The movement operates at 3.5Hz (25,200 bph), which is a bit slower than the more standard 4Hz of say the ETA 2892. Horage preferred this operating frequency because it allows for the longer 65 hour power reserve (which is about day longer than most 4Hz movements with “standard” barrel sizes. The movement is not meant to be slim, per se, but it is considerably smaller than many of today’s much larger movements — which more or less means it can be in thinner timepieces (a good thing). The movement from the rear really doesn’t look too much like other movements. One interesting element is how the escapement appears to be placed on the other side of where the balance wheel is. I have a feeling this allows for a bit more stability.

In this particular execution, the K1 automatic movement also includes a small seconds indicator, power-reserve indicator, and a big date indicator at 3 o’clock. This is the smallest big date that I’ve seen, offering the visual and intellectual appeal of a big date (two as opposed to one disc) but for smaller spaces. For example, the big date indicator window doesn’t require the actual 3 o’clock hour marker to be removed on the dial. In order to promote the performance of the K1 movements — despite the slower operational frequency  the — K1 inside each Autark is given a COSC Chronometer certification.

Probably the most controversial part of the Horage Autark is the dial. How is a relatively straightforward and conservative dial controversial? Well, aside from the “Horage” name (which plenty of native English speakers will giggle at), it feels like the most non-designed part of the watch. It isn’t simple in its construction or parts, and it clearly has good detailing, but the dial lacks a bit of refined personality that luxury seekers understandably expect in a watch at this price point. To me, it looks like a designer was inspired by a really legible wall clock and then decided to make it into a wrist watch dial. 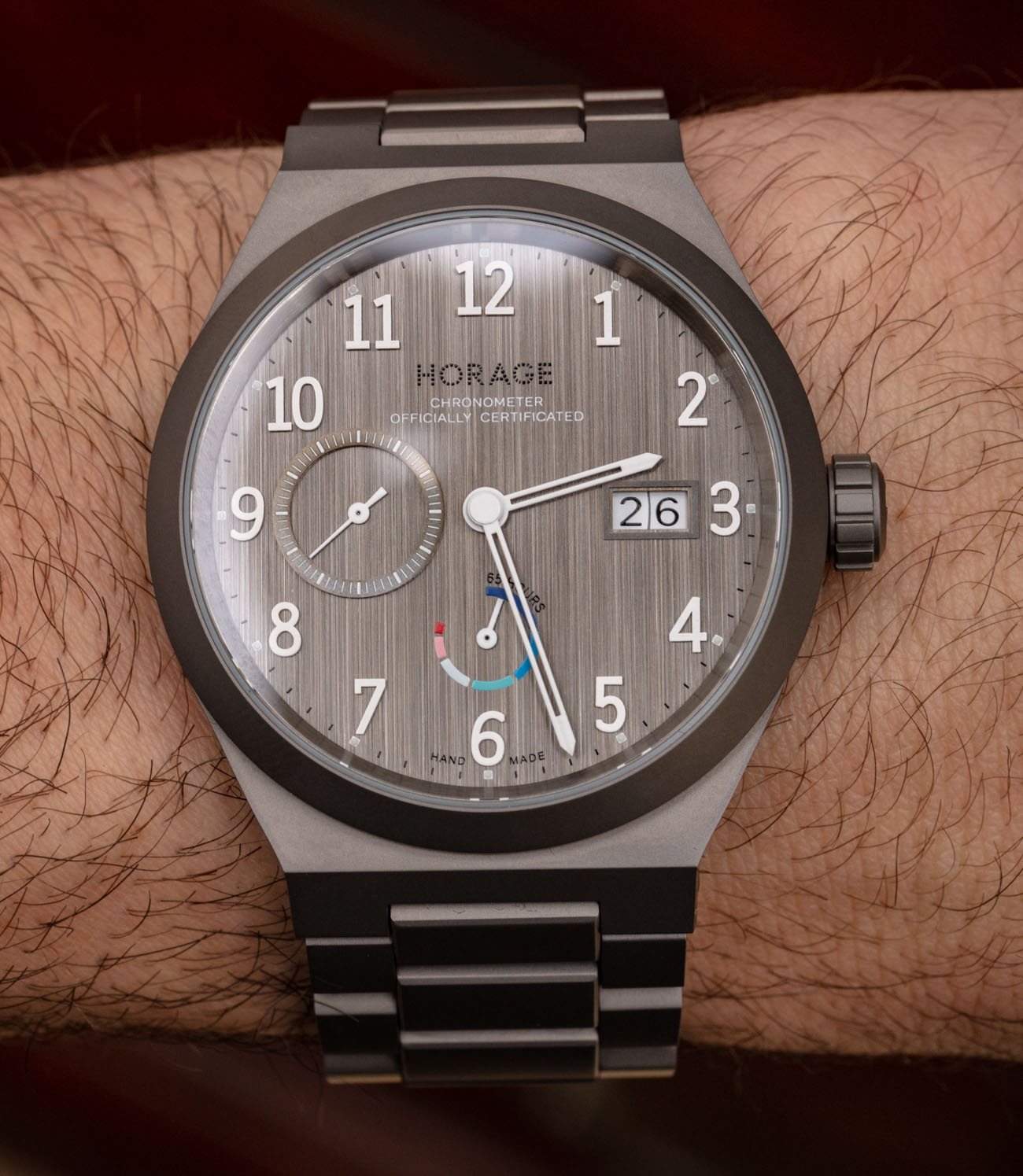 Not that there is anything inherently wrong with that, but the applied numerals are in a font that really doesn’t go with anything else, and the assortment of the elements on the dial appears a bit haphazard rather than being formally integrated into the overall design. Small strips of luminant are painted at the edges of the skeletonized hands, along with small points of lume painted on the outside of the applied hour markers. It might be possible that the dial doesn’t quite have enough lume for serious night duty, but if you step into a dark room after immediately being in the sunlight, you should be able to read the dial just fine. 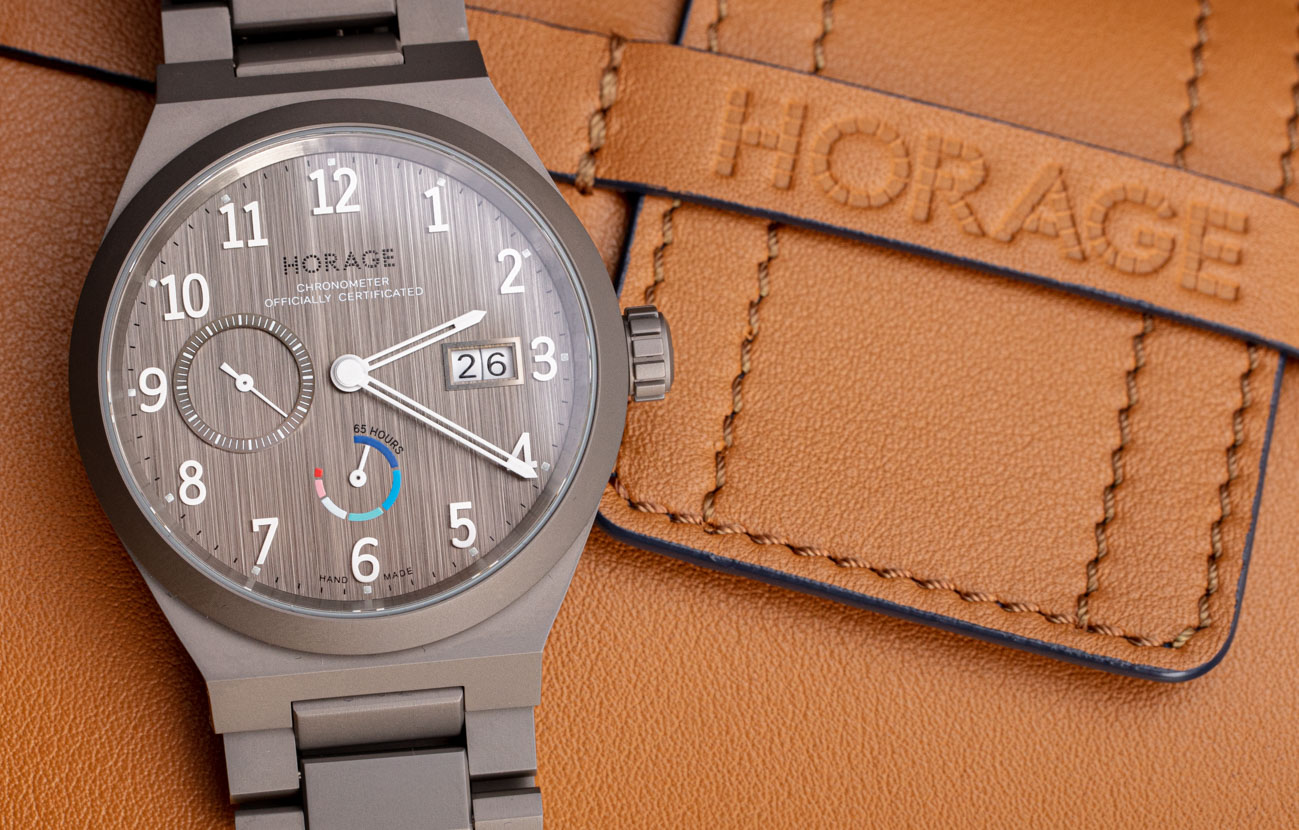 The Autark dial is proof that high quality materials and finishing alone are not enough to make a watch dial an iconic design. It is also one of the easiest things for Horage to play with moving forward, as the Autark is clearly a platform the brand needs to keep building upon. That said, the Autark dial doesn’t do anything wrong and is hard to complain about from a utilitarian perspective. Just having the experience of wearing very beautiful dials (that can also be legible and functional, from time to time), I want all watches I like to be as refined as possible where our eyes look most.

Plenty of people will, however, not take any issue with the Autark dial and appreciate its focus on legibility and functionality. It isn’t a bad dial, it could just be better, given the potential of the Autark as being a compelling alternative to a lot of much more established luxury Swiss timepieces. This particular 10 years limited-edition version of the Autark is limited to 99 pieces and is priced at a few hundred dollars more than the stock Autark. What do you get with the higher price? Quite a lot, actually. The movement has an entirely different execution, and the titanium is both hardened and given a different finishing. The dial is distinctive and more complex. It includes the matching leather strap, and the movement is also COSC Chronometer-certified. Most brands simply offer new colors for limited editions and increase the price by sometimes thousands — so, comparatively speaking, there is a lot of value here. Price for the Horage Autark 10 years limited-edition watch is 3,990 Swiss Francs. Learn more at the Horage website here.

Necessary Data
>Brand: Horage
>Model: Autark 10 years limited edition
>Price: 3,990 Swiss Francs
>Size: 39mm-wide, ~10mm-thick, ~48mm lug-to-lug distance
>When reviewer would personally wear it: As a simple and satisfying daily wear tht has a number of features of specific interest to modern watch enthusiasts.
>Friend we’d recommend it to first: Watch collector with conservative taste and an engineer’s mentality who can appreciate the various virtues of what the Horage Autark offers for this price.
>Best characteristic of watch: Fair price for a lot of watch that has an impressive in-house movement, comfortable lightweight case, and a very legible dial that includes desirable complications.
>Worst characteristic of watch: Brand has yet to hit its “design stride,” currently seeming to focus on impressing consumers with its value and materials. The next step is to make the watches a bit more distinctive and elegant. Dial works well but lacks personality.