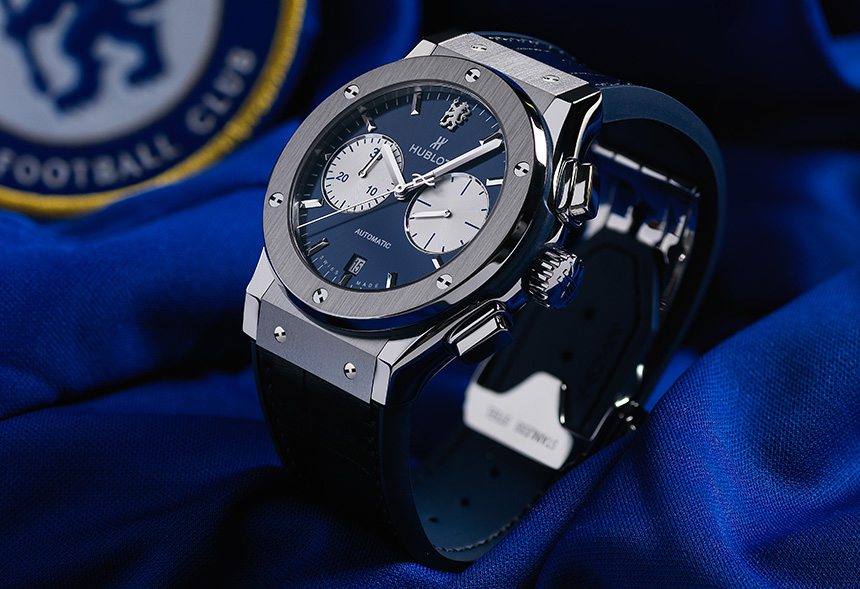 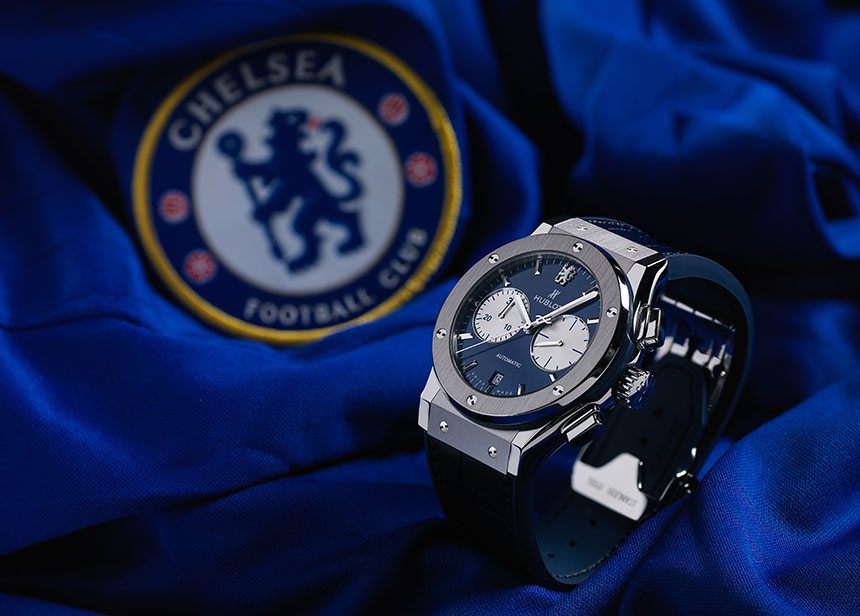 In 2010, Hublot pulled off one hugely impressive marketing coup when the small but charismatic watch brand somehow managed to fight off larger companies to become the official timekeeper of the South Africa 2010 Fifa World Cup. The World Cup, which takes place every four years, is consistently watched by over a billion people around the world. And thanks to the prominent display of Hublot branding at every match, those who did not know anything about the Swiss watch maker soon did. Football has since become an important marketing device for Hublot, and they have recently strengthened their association with the sport by unveiling the new Hublot Classic Fusion Chronograph Chelsea FC watch, the official watch of Chelsea Football Club.

For their partnership with Chelsea, Hublot has released the Hublot Classic Fusion Chronograph Chelsea FC watch. The Classic Fusion case is the more restrained and elegant version of their bombastic Big Bang case, relatively speaking, of course, and is perhaps more fitting for a football club that hails from the glitzy district of Chelsea, London. Still, despite being a more elegant version of the more popular Big Bang case, the Classic Fusion case still cuts a remarkable presence on the wrist. In the case of the Hublot Classic Fusion Chronograph Chelsea FC watch, what we have is a large, 45mm-wide titanium case that features an exquisite mix of satin and mirror finishing. 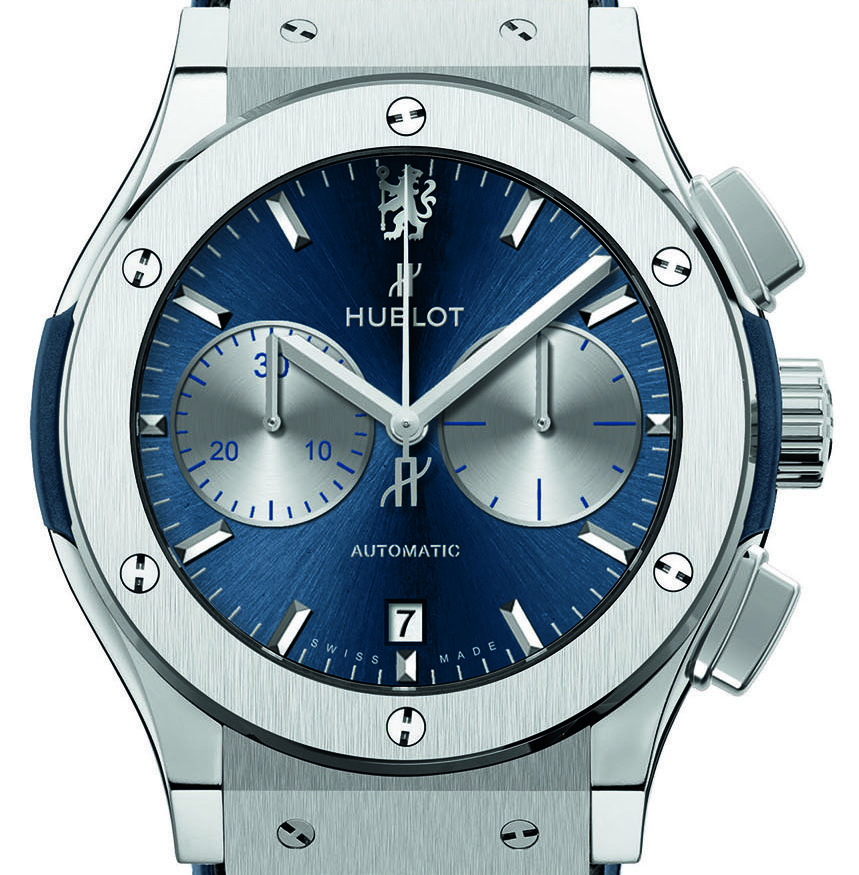 The dial of this watch is clearly inspired by the colors of Chelsea Football Club, which are nicknamed “The Blues.” The dial features a blue sun-ray satin finish with large applied hour markers. Fittingly, the 12 o’clock hour marker has been replaced by the lion found in Chelsea’s club crest. The watch features a see-through sapphire case back, which also features a print of the Chelsea club crest. Inside the watch beats Hublot’s HUB1143 self-winding chronograph movement. Made out of 280 components, it has a power reserve of 42 hours and is a staple movement in the Classic Fusion line.

Now, I have to admit, Chelsea didn’t do so well last season, but then again, last season was a bit of a shocker, as outsiders Leicester City won the leagues against all odds. If you are not familiar with English football, bookmakers had given Leicester City 5000-1 odds of winning the league – that’s how much of a shocker last season was. Still, there’s no denying that Chelsea has made massive progress in the past two decades. From a side that often languished in the middle of the table, Chelsea is now regarded as one of the giants of world football, and is recognized for their will to win. And with the tactically astute Italian Antonio Conte at the helm now, Chelsea will be eager to exact revenge and must be viewed as title challengers for the upcoming season. 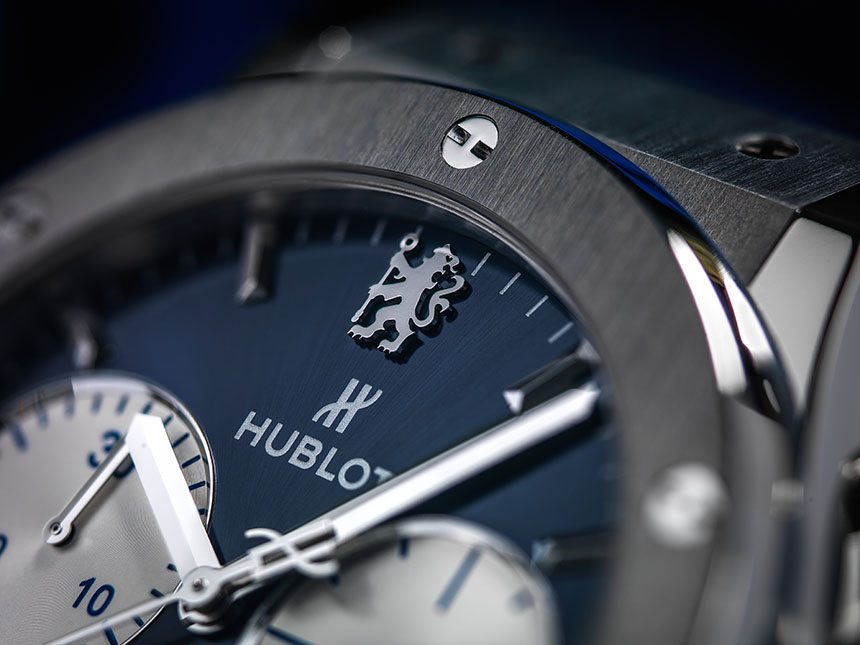 The partnership with Hublot is fitting. Like Chelsea, Hublot has made significant progress in recent times. It introduced the Big Bang in 2005, and was promptly acquired by LVMH in 2008. Since then, the brand has introduced its own in-house automatic chronograph movement with the Unico and has also released a good number of interesting watches including the all sapphire Hublot Big Bang UNICO Sapphire watch (hands-on here) and the amazing MP-05 LaFerrari watch (hands-on here) that has a 50-day-long power reserve.