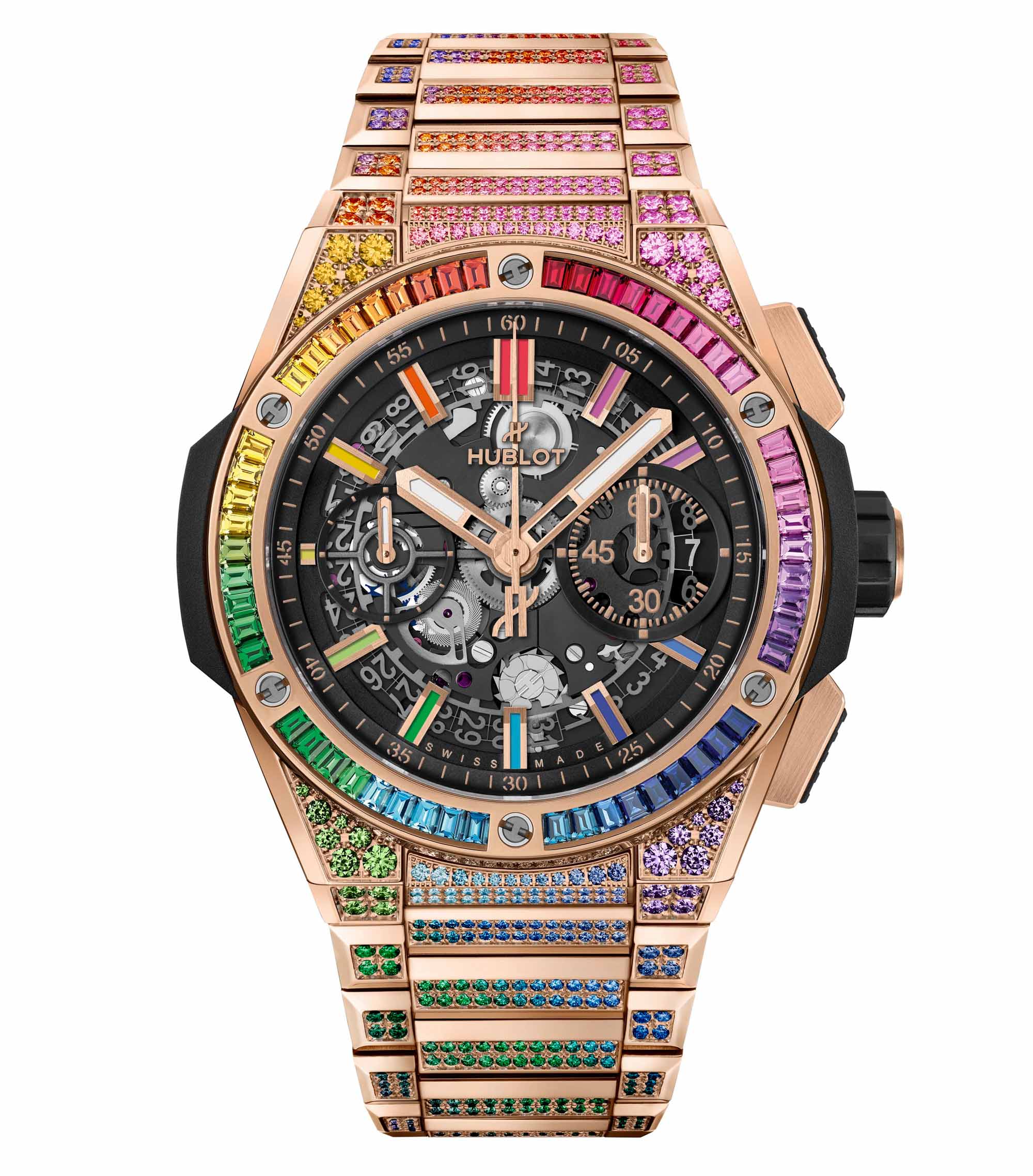 Rainbow watches have been having a bit of a moment over the course of the last several years, and as a company known for its bold and colorful designs, Hublot is a bit of an industry leader when it comes to rainbow timepieces. While the aesthetic itself isn’t exactly new anymore, Hublot continuously finds novel ways to express a technicolor wristwatch, and as part of the brand’s releases for LVMH Watch Week 2023, Hublot has unveiled two new rainbow  gem-set Big Bang watches with matching integrated bracelets. Officially known as the Hublot Big Bang Unico Integrated Rainbow and the Big Bang Unico Time Only Rainbow, the duo of new models are very serious and unapologetically luxurious renditions of what is inherently a rather lighthearted overall aesthetic, and they might be the most overtly resplendent rainbow watches Hublot has put forward thus far. 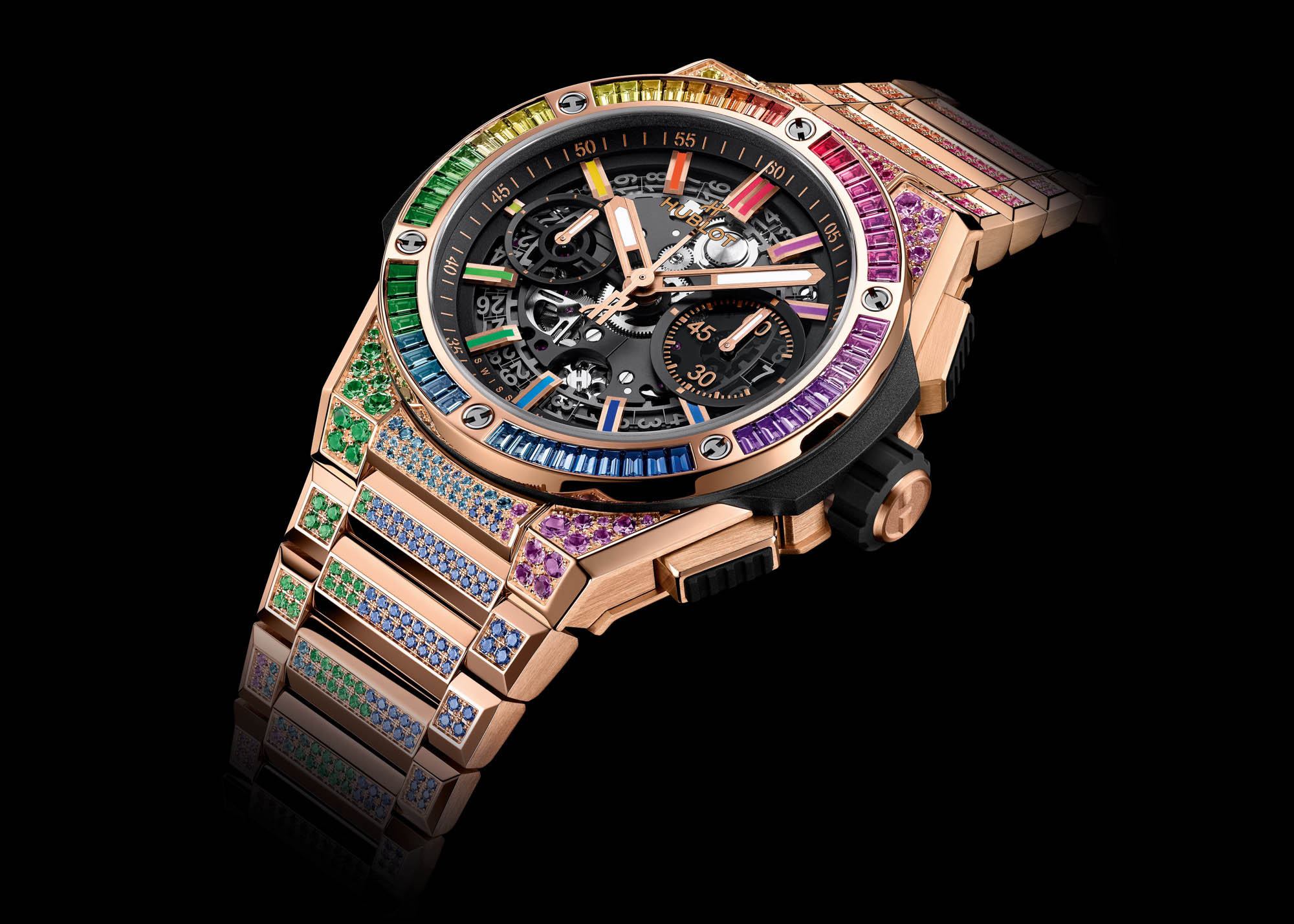 Crafted from polished satin-finished King Gold, which is Hublot’s unique blend of extra warm-colored 18k red gold, the Hublot Big Bang Unico Integrated Rainbow builds upon the core design of the brand’s existing Big Bang Unico Integrated models and it features a case that measures 42mm in diameter by 13.45mm-thick. The overall case profile is instantly recognizable as being part of the Big Bang collection, and as far as the core external case design of the watch, it is largely the same as the other solid gold Unico Integrated models currently available in the lineup, complete with its angular case, integrated lugs, and signature bezel with six exposed screws. 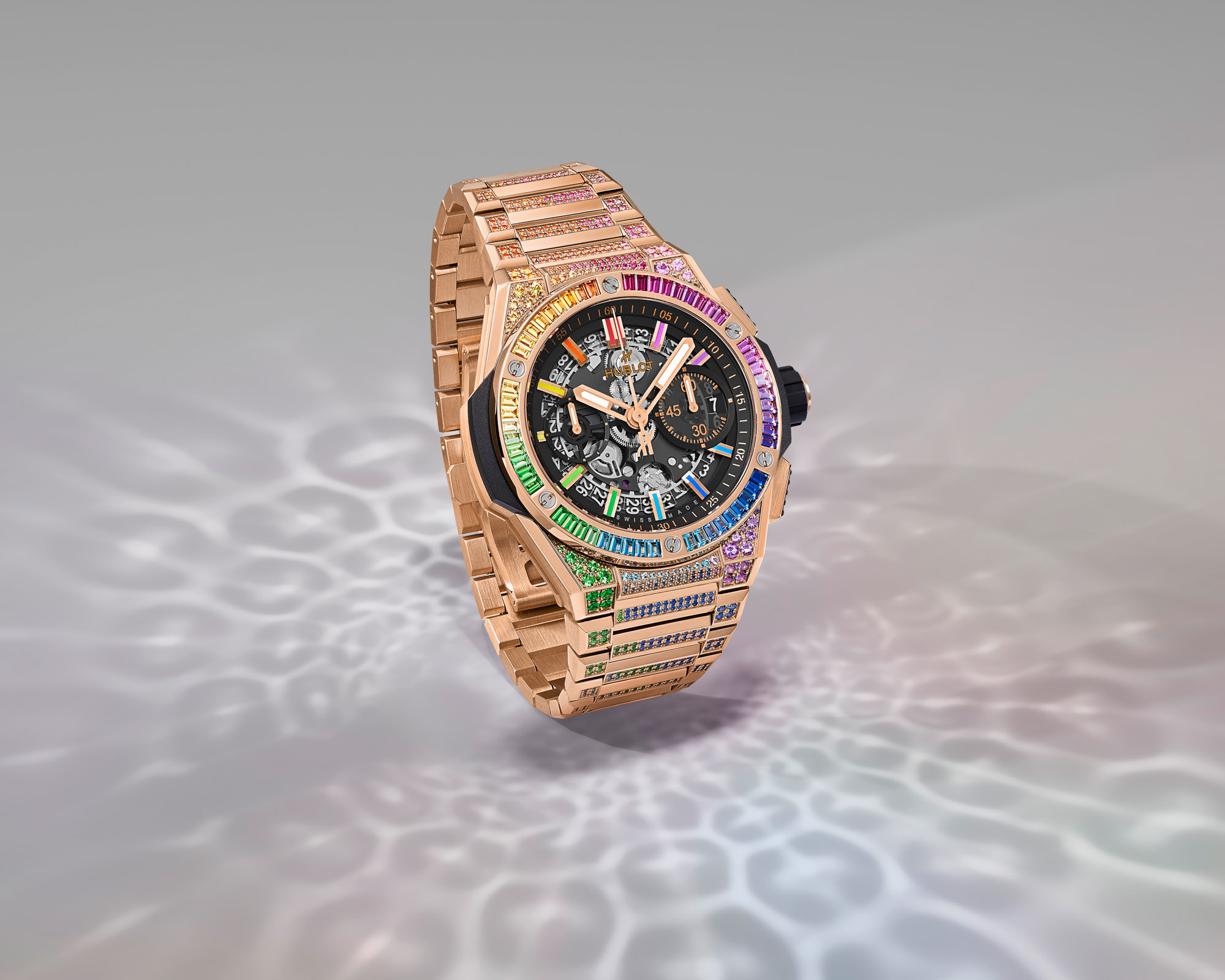 Similar to the non-rainbow versions of the watch, a pair of flat sapphire crystals are fitted to both the dial side of the Big Bang Unico Integrated Rainbow and its display style caseback, while a rubberized winding crown at 3 o’clock flanked by a set of rectangular pushers offers access to the movement. Powering the watch is the familiar Unico Manufacture MHUB1280 self-winding chronograph movement. Running at a frequency of 28,800vph (4 Hz) with a power reserve of approximately 72 hours, the Unico MHUB1280 offers flyback functionality, and it features a unique skeletonized design that displays its column wheel mechanism through the dial side of the watch. 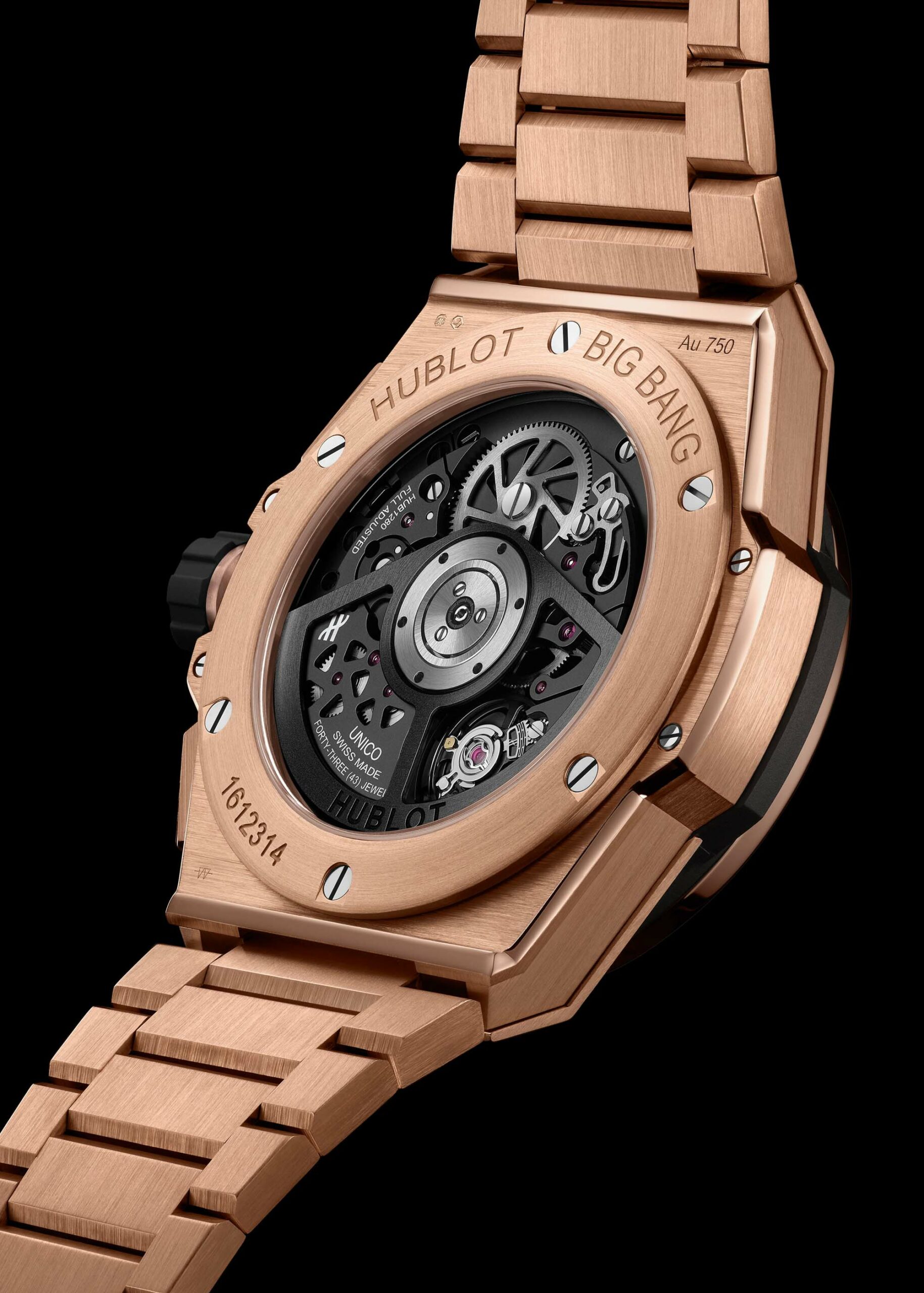 The other gem-set rainbow model joining the lineup for LVMH Watch Week 2023 is the Hublot Big Bang Unico Time Only Rainbow, which is based on the brand’s current Integrated Time Only series. While the Big Bang is most frequently expressed as a chronograph, the Time Only models embrace a simplified time-and-date format (despite their “Time Only” name), in order to offer much of the Big Bang’s signature aesthetic, but in a more compact and paired-down overall format. Just like the other models from this collection, the case of the new Big Bang Unico Time Only Rainbow measures 40mm in diameter by a rather svelte 9.25mm-thick, and both the case and its matching gem-set integrated bracelet are crafted from the brand’s proprietary 18k King Gold alloy. 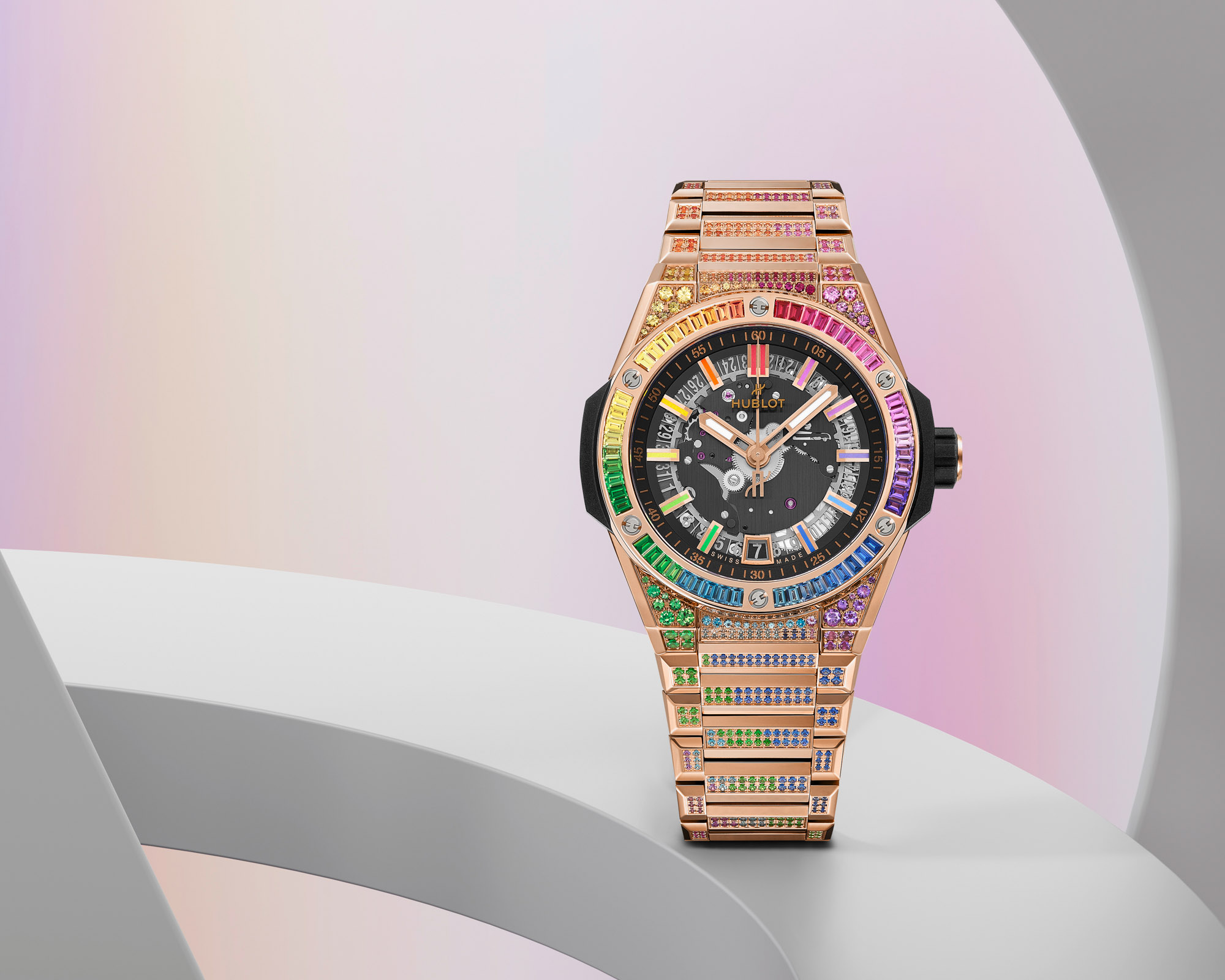 Despite being a time-and-date watch, the Unico Time Only Rainbow offers the Big Bang collection’s signature angular case profile, complete with integrated lugs, 100 meters of water resistance, and the obligatory six exposed screws on its rainbow gem-set bezel. Like its siblings from the Integrated Time Only series, the new gem-set rainbow edition is powered by the MHUB1710 automatic movement, which runs at a frequency of 28,800vph (4 Hz) with a power reserve of approximately 50 hours. While its performance specs are fairly middle-of-the-road, the MHUB1710 offers a thin design that enables the Big Bang Unico Time Only Rainbow to have a rather slender overall profile on the wrist, despite its bold styling. 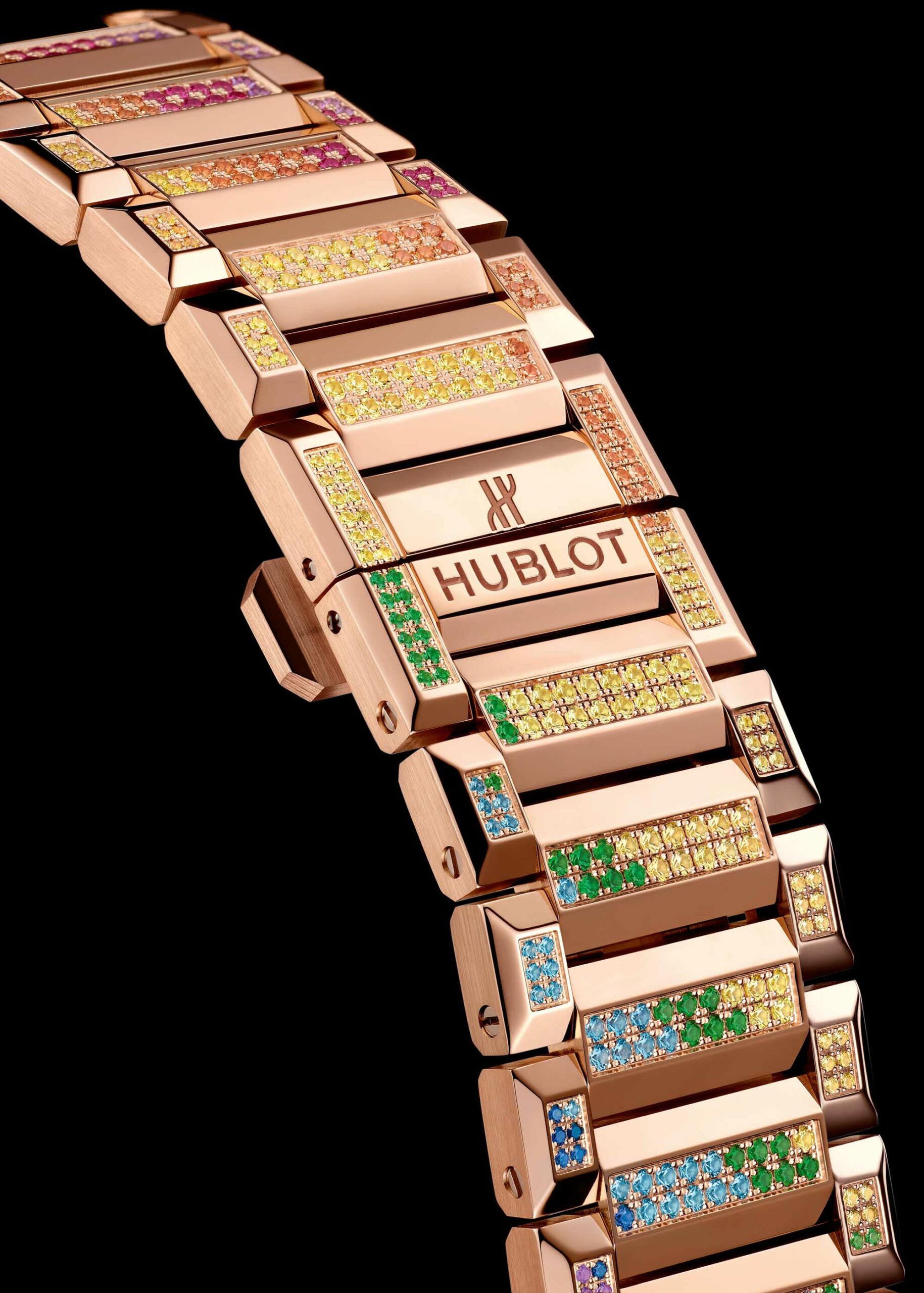 Hublot has produced numerous different gem-set rainbow watches before, and it has also previously created Big Bang Integrated models using its proprietary King Gold alloy. However, this duo of new releases marks the first time that the brand has paired one of its rainbow gem-encrusted watches with a matching bracelet that is also paved in multi-colored gemstones. The rainbow assortment of stones that appear on the two watches consists of ruby, amethyst, blue topaz, and tsavorite, along with pink, orange, blue and yellow sapphires. Since each stone has its own unique color and hue, Hublot’s team of master gem-setters must carefully select and place each individual stone in order to create the watches’ multi-colored gradient aesthetic. 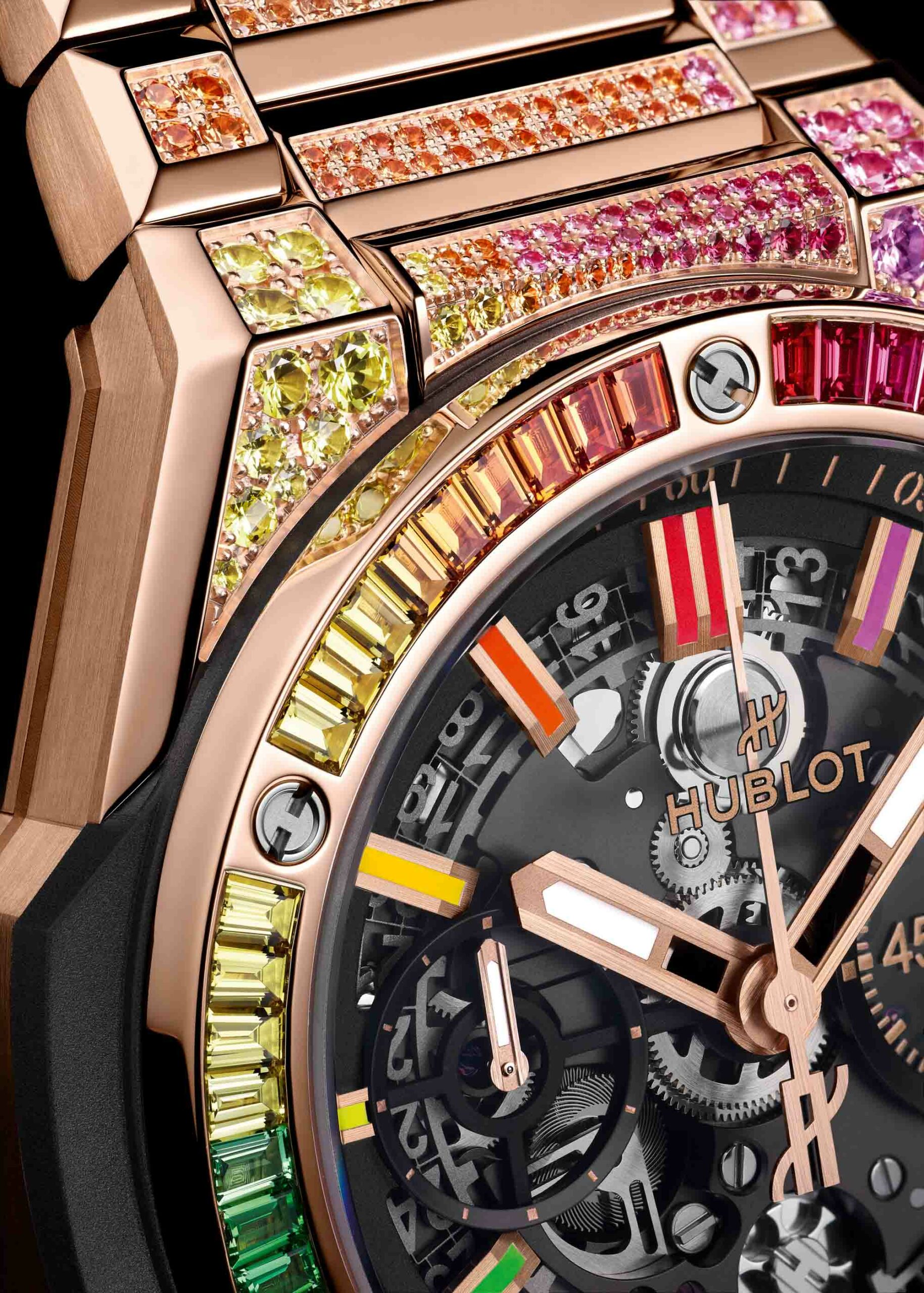 The Big Bang Unico Integrated Rainbow features 174 gemstones set into its case and bezel, with an additional 768 stones set into its bracelet, while the Big Bang Unico Time Only Rainbow has 176 gems on the watch itself with 748 additional stones set into the links of its integrated bracelet. While the previous rainbow watches fitted with matching rainbow-colored leather straps have arguably offered more of a rainbow-colored aesthetic, none have expressed this trendy colorway in quite as luxurious of a manner, and unlike the recently-released Hublot MP-09 Tourbillon in rainbow-colored carbon fiber, this duo of gem-set rainbow watches leans heavily in the resplendent and jewelry-oriented direction. 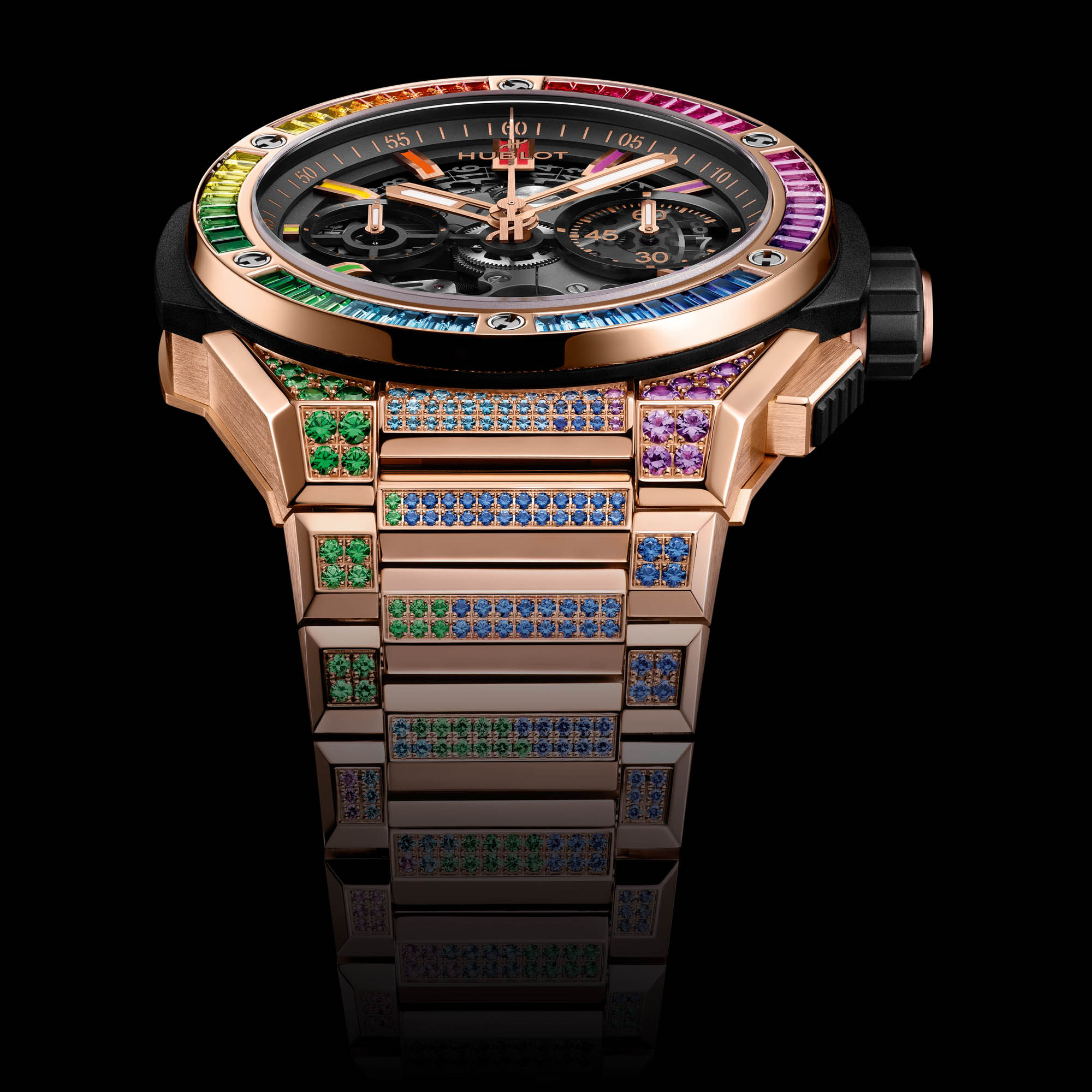 When you consider that both of these new gem-encrusted Rainbow Hublot watches are crafted from solid 18k gold and set with nearly a thousand different rainbow-colored gemstones, you can already assume that they are going to be rather expensive. The chronograph-equipped Hublot Big Bang Unico Integrated Rainbow is accompanied by an official retail price of $169,000 USD, while the Big Bang Unico Time Only Rainbow comes in at $158,000 USD. These six-figure price tags place these two gem-encrusted rainbow watches right near the very top end of the Big Bang lineup, with only a handful of watches like the tourbillon-quipped models in colored sapphire cases priced above them. As a point of reference, the new rainbow chronograph model costs nearly three times as much as the standard King Gold version of the Big Bang Integrated that doesn’t have any gemstones, and nearly 70% more than the rainbow gem-set Big Bang that is fitted with a leather strap instead of a matching gem-encrusted gold bracelet. While there is certainly no value proposition to be found here for the budget-conscious collector, that is hardly the reason why someone buys a solid gold watch that is covered in rainbow-colored gemstones in the first place, and these two new Hublot models are intended to be flagrantly luxurious statement pieces and are expectedly priced accordingly. For more information on Hublot’s new Rainbow Big Bang Integrated watches, please visit the brand’s website.