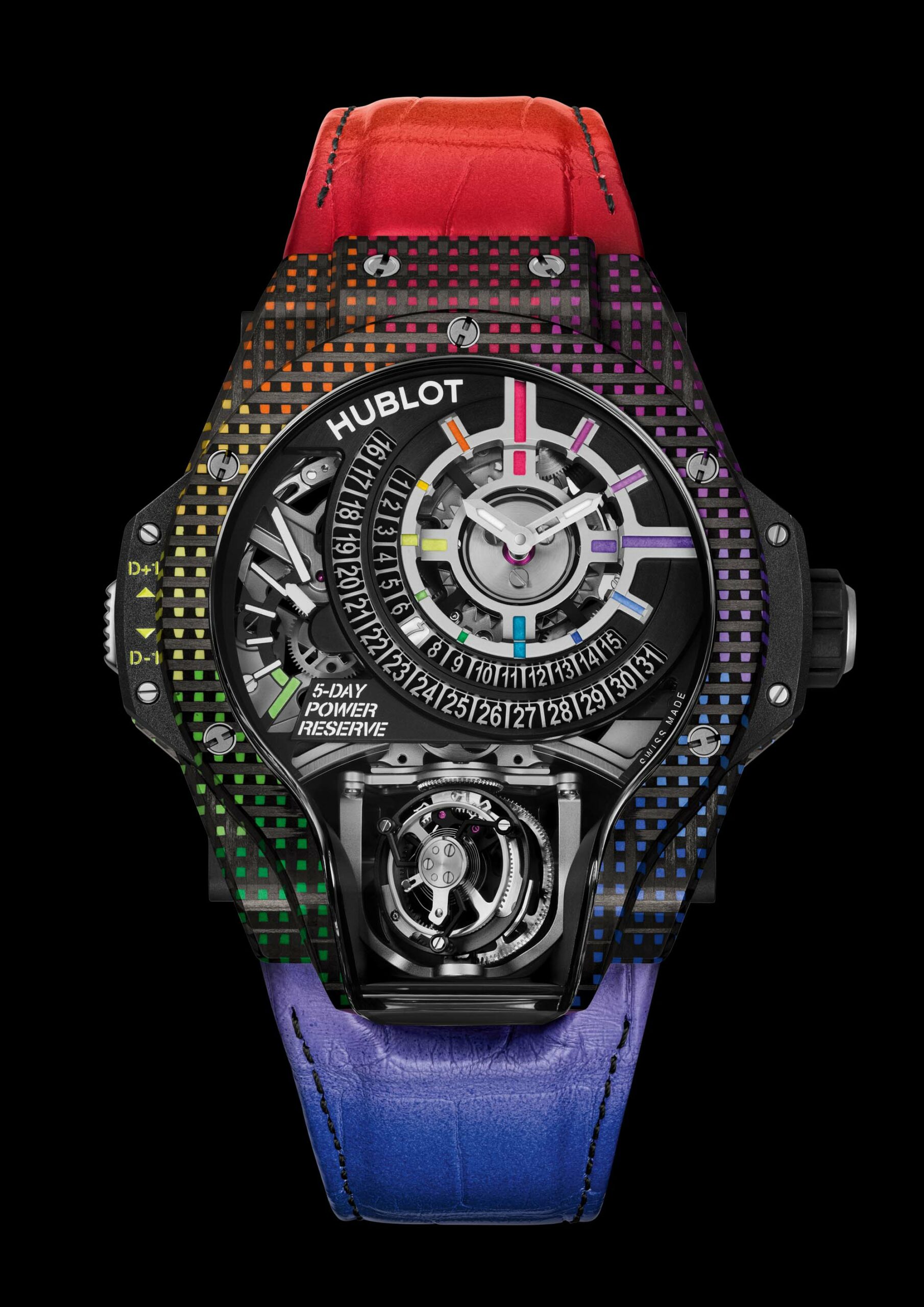 If you were to come up with a shortlist of the top five watch trends that have captivated the collective imagination of the industry in recent years, rainbow-colored timepieces and carbon fiber cases would almost certainly both make an appearance on it, likely accompanied by integrated bracelet sports watches and a specific shade of turquoise that we all associate with one very specific diamond retailer. As a brand, Hublot is hardly a stranger when it comes to indulging in industry trends, and the manufacturer’s latest release is a striking rendition of the already rather bold and in-your-face MP-09 Tourbillon Bi-Axis 3D Carbon watch, which aims to recreate the rainbow spectrum of colors normally achieved by gemstones, but reimagined in a high-tech and sporty format using carbon fiber composites. 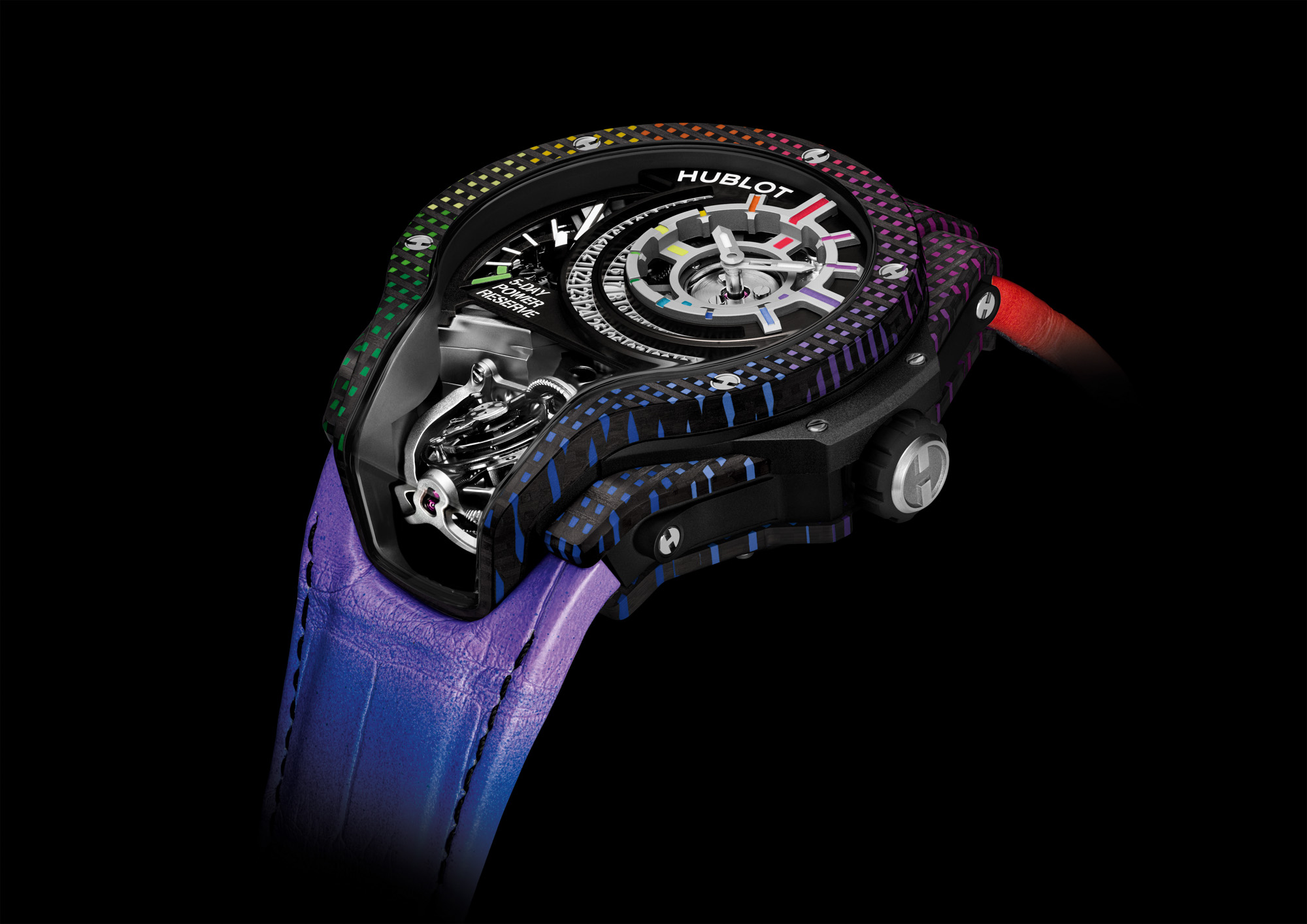 At its core, the new Hublot MP-09 Tourbillon Bi-Axis Rainbow 3D Carbon is essentially a color variation of the brand’s existing model, which means that it features the same statement-worthy 49mm case made from carbon fiber that protrudes at the 6 o’clock location to prominently display its bi-axis tourbillon. Like its siblings, the top surface of the watch is occupied by a large and asymmetric sapphire crystal, which heavily curves as it extends towards the bottom of the case to create a large two-sided display window for the tourbillon. Similar to the rest of the MP-09 series, a winding crown at 3 o’clock offers access to the movement, while a separate switch on the opposite side of the case at 9 o’clock allows users to independently adjust the date display. A large sapphire crystal fitted to the reverse side of the case completes its skeletonized design, and just like the rest of the MP-09 range, water resistance comes in at 30 meters to help guard against any incidental contact. 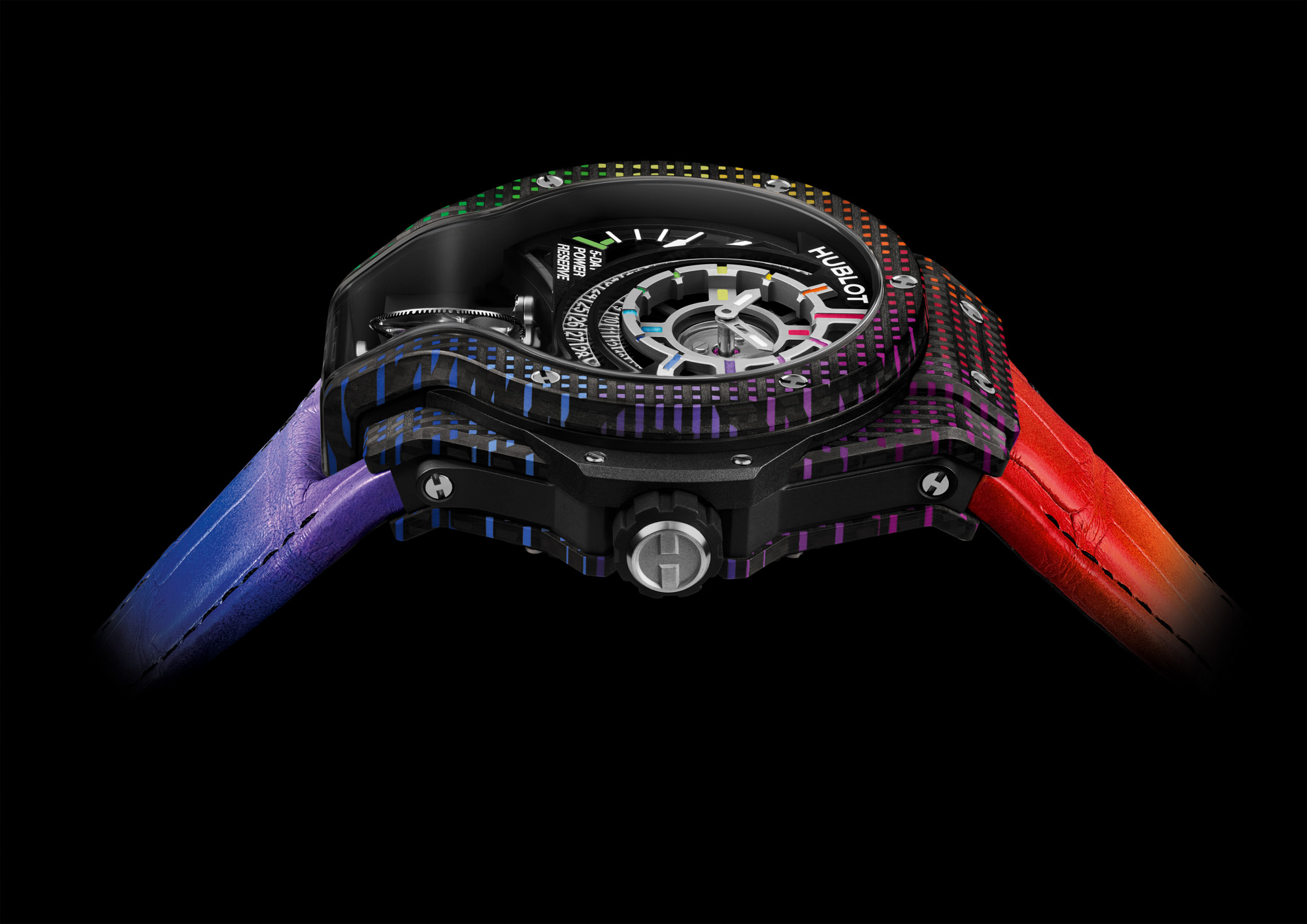 While the overall design, features, and construction of the new Hublot MP-09 Tourbillon Bi-Axis Rainbow 3D Carbon will be immediately familiar to those who are already acquainted with the existing range, the real story here is the innovative way that Hublot was able to achieve the unique multi-colored gradient appearance of the carbon fiber material that is used in its construction. Rather than just being a single color like the other models from the MP-09 range, the carbon fiber used for this new Rainbow model incorporates all of the different colors from the existing lineup, along with others such as purple and orange that aren’t present in the current collection. With that in mind, since the bezel displays every single one of the different colors within one component that is made from a single piece of material, Hublot had to find a way to make the carbon fiber material itself incorporate the desired rainbow spectrum of colors. Hublot is no stranger to pushing the envelope when it comes to case materials, although most of the brand’s greatest advancements have been in regard to its various technologies involving ceramic. That said, carbon fiber also plays a prominent role in Hublot’s catalog and this rainbow-colored 3D carbon case represents the first of its kind. 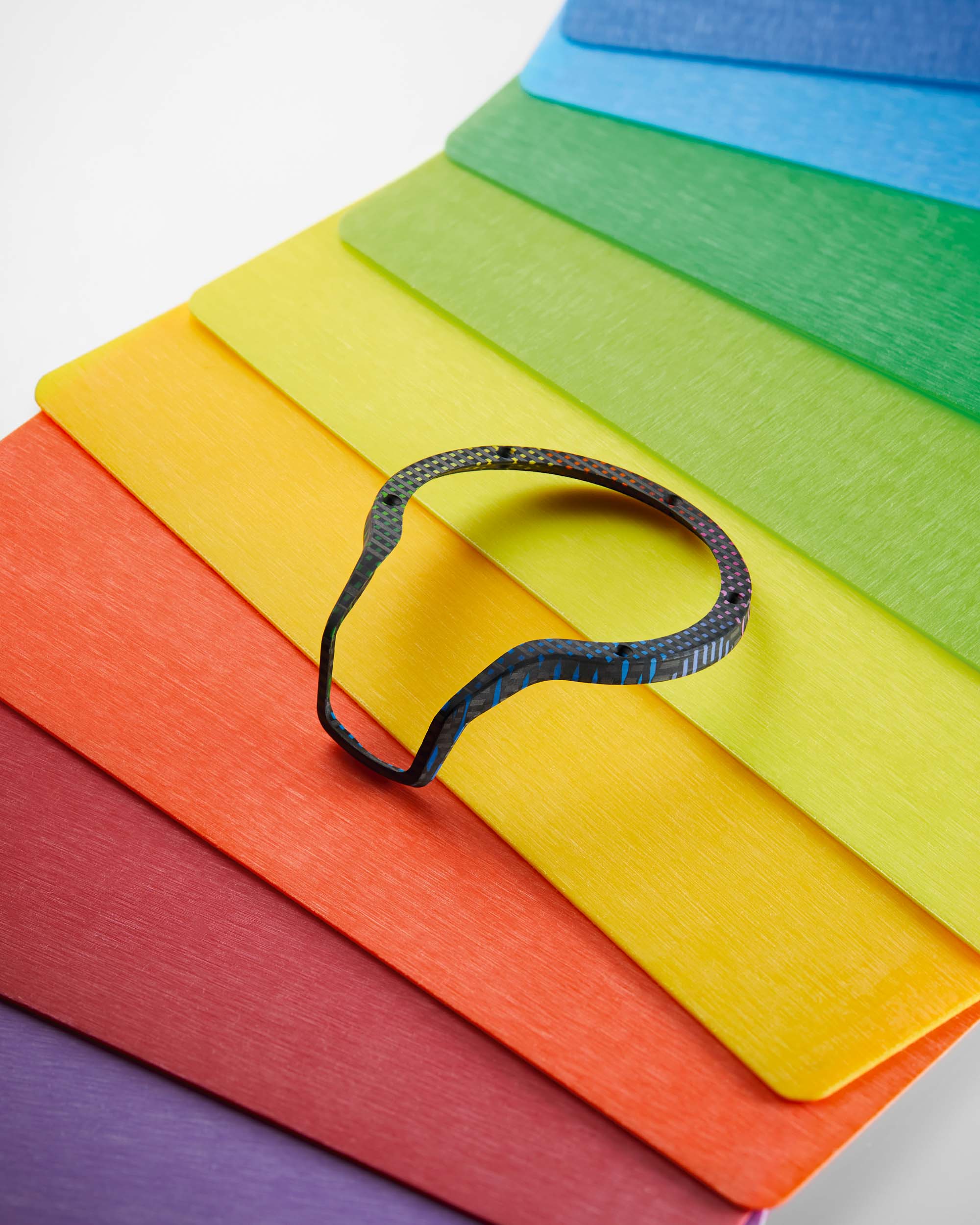 As the brand explains it, the case is essentially braided. Thin bars of carbon are laid out flat and set a few millimeters apart, while bars of colored composite are placed vertically into the gaps and protrude slightly from the carbon material. The difference in height is then filled with a third carbon mesh, which raises all of the different bars up to the same level. In order to form the necessary weave that provides both strength and the material’s signature pattern, both the carbon and the composite bars are threaded across all three dimensions (length, width, and height), essentially forming one singular woven mass. 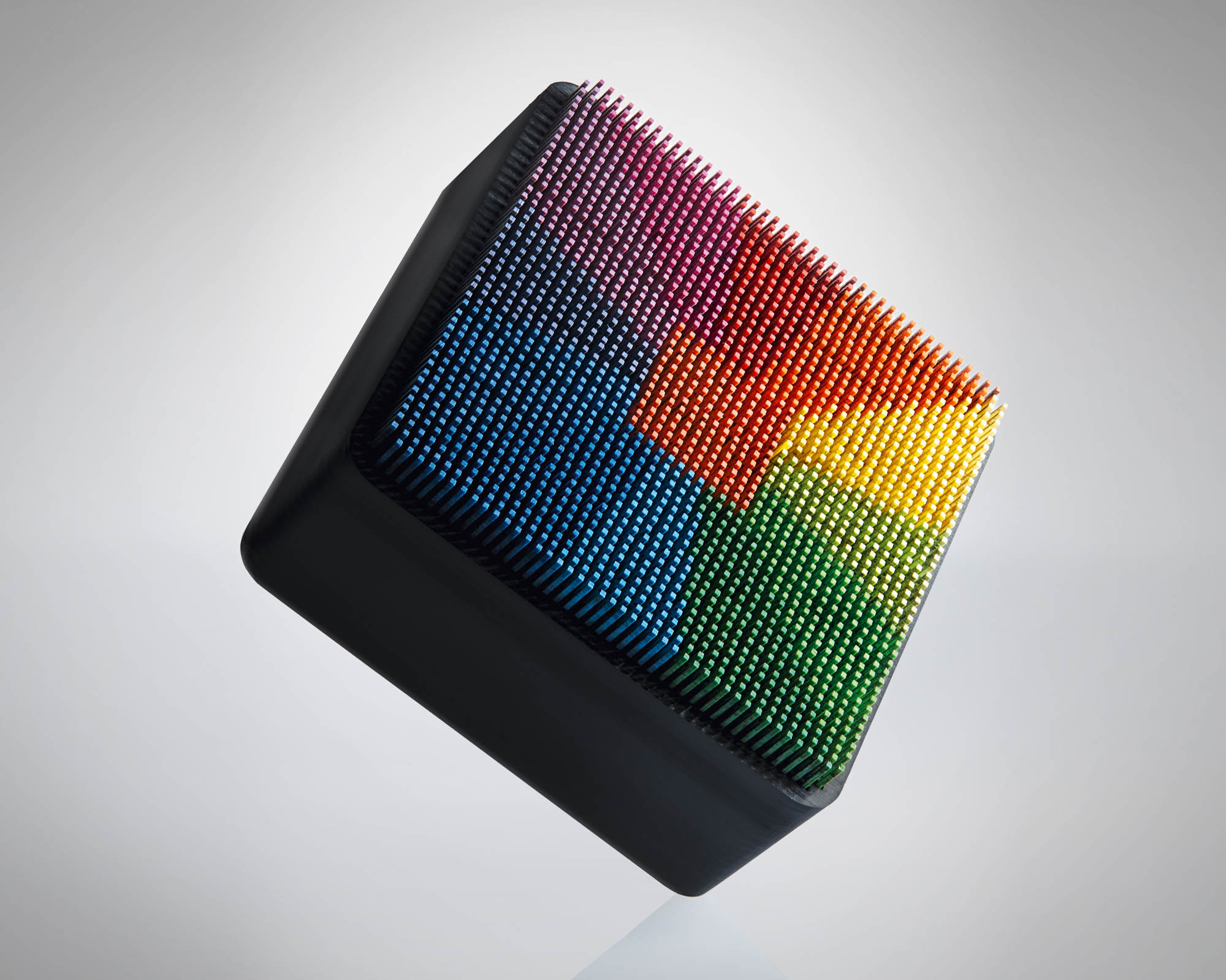 In order to achieve a piece of material that was large enough to be milled into the case components, hundreds of individual colored inserts had to be created, and a near-infinite number of shades had to be created in order to reproduce the harmonious and natural gradation effect. Despite consisting of hundreds of individual bars, the case components for the MP-09 have completely smooth surfaces and feel polished to the touch. 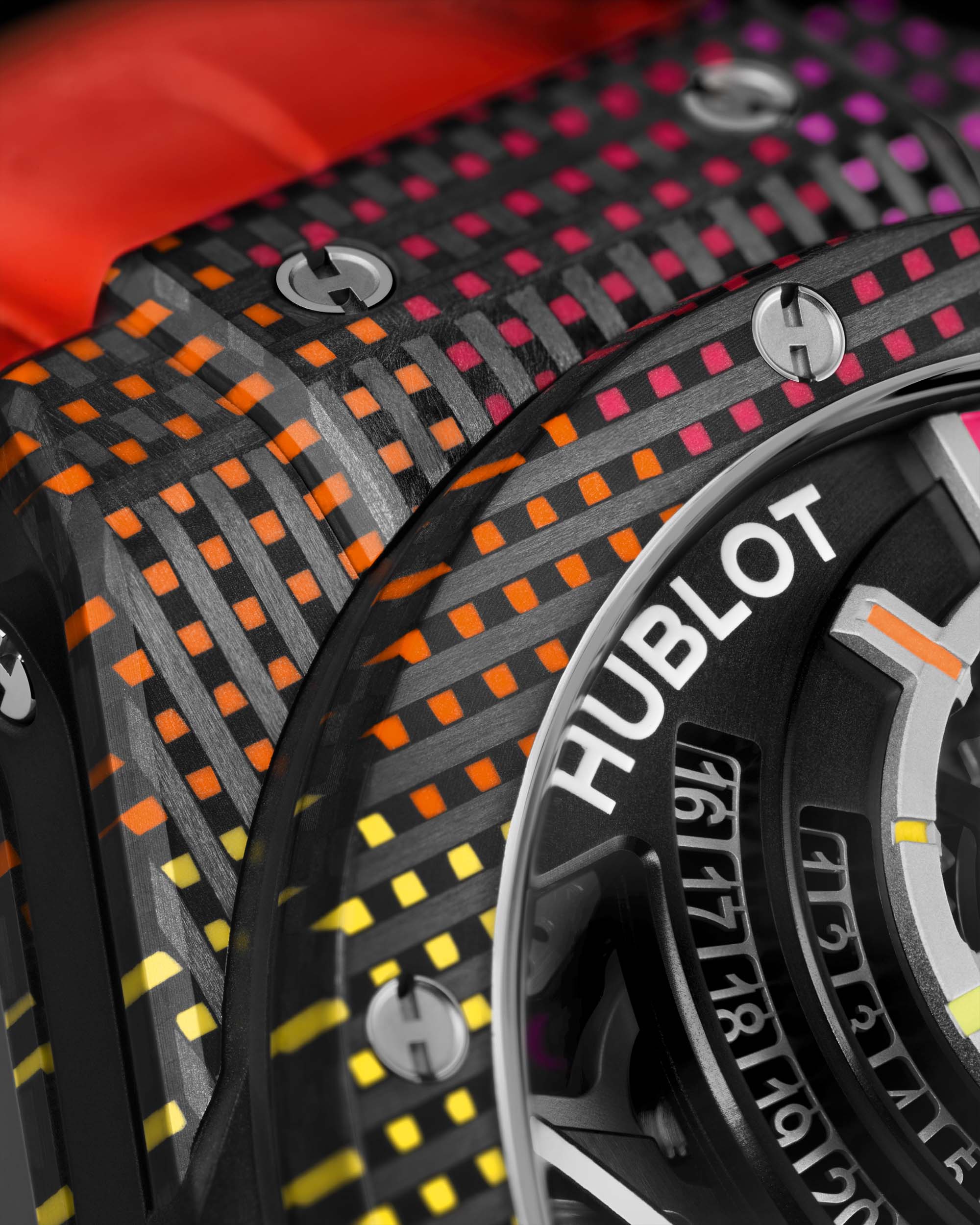 To correspond with its colorful case, the dial of the new Hublot MP-09 Tourbillon Bi-Axis Rainbow 3D Carbon also embraces a multi-colored dial. Just like the rest of the MP-09 range and more-or-less any other watch with a skeletonized display, the word “dial” is used a bit subjectively here, as the face of the watch is occupied by a power reserve indicator at the 9 o’clock location and a bi-axis tourbillon prominently protruding from the lower end of the display, while the time itself is presented in the upper right-hand corner using a skeletonized dial, with an arc-shaped date display surrounding its perimeter. On the new MP-09 Tourbillon Bi-Axis Rainbow 3D Carbon, each of the hour markers is finished in a different color that corresponds with the gradient pattern established by the colored carbon fiber of its case for a cohesive technicolor overall appearance. Aside from these separate components that form the MP-09’s display, the rest of the face of the watch remains open-worked, exposing the mechanical workings of the movement that sits inside the case. 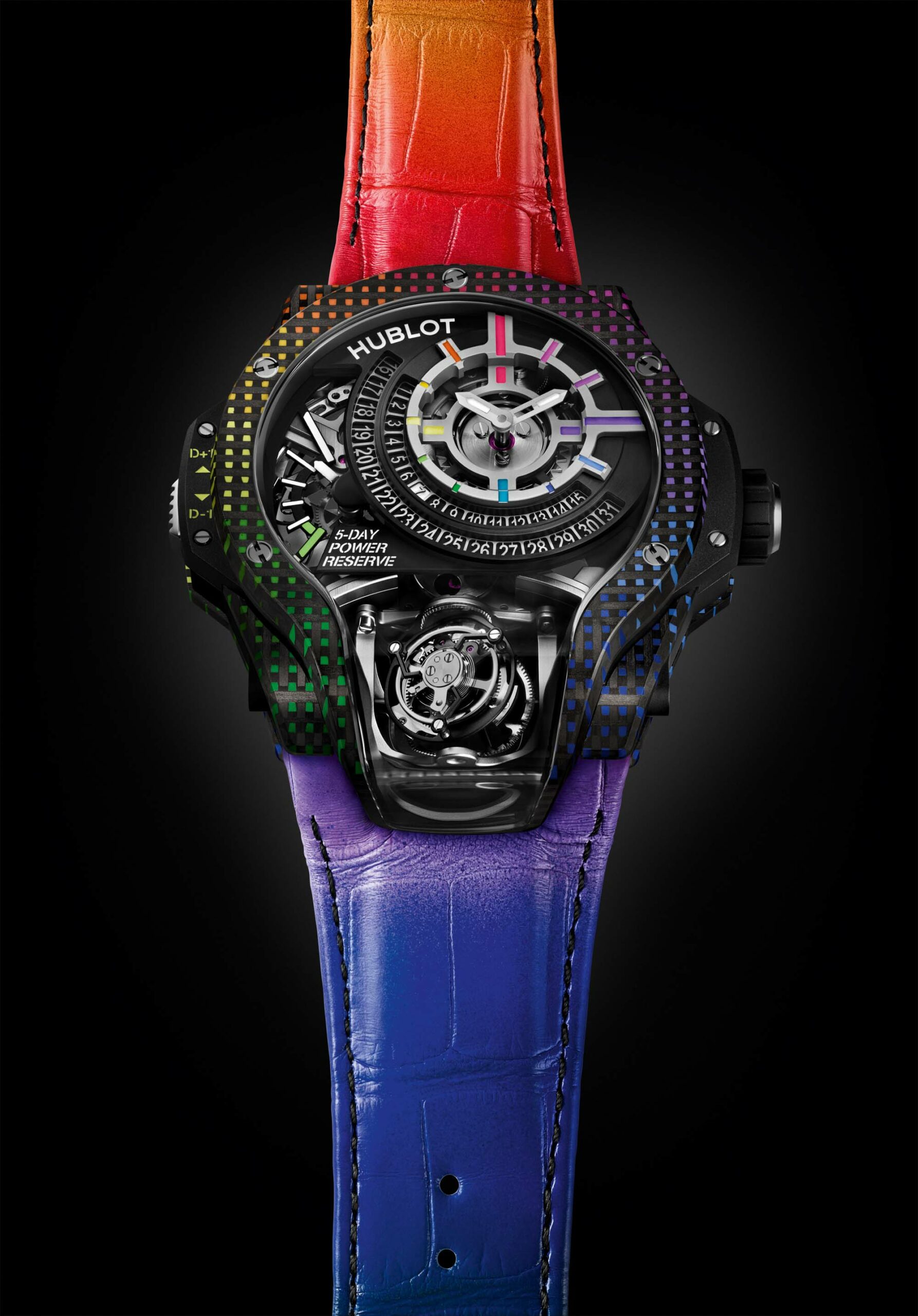 At the heart of all this colorful carbon fiber is the same in-house HUB9009.H1.RA manual-wind movement that you will find inside the rest of the MP-09 Tourbillon Bi-Axis 3D Carbon range. Featuring a bi-axis tourbillon, a date display with an independent corrector switch, and a highly architectural skeletonized structure, the HUB9009.H1.RA runs at a frequency of 21,600vph (3 Hz) with a power reserve of approximately 120 hours. Additionally, rather than featuring a rubber strap like its single-color siblings, the new Hublot MP-09 Tourbillon Bi-Axis Rainbow 3D Carbon is fitted with a rainbow-colored alligator leather strap that is fitted with a stainless steel deployant clasp. Just as you would expect, the rainbow pattern on the strap corresponds with the one established by the case material, which means that the side fitted to the top of the watch appears in the warmer colors of the rainbow spectrum, while the 6 o’clock side features the cool colors to further create a cohesive overall appearance. 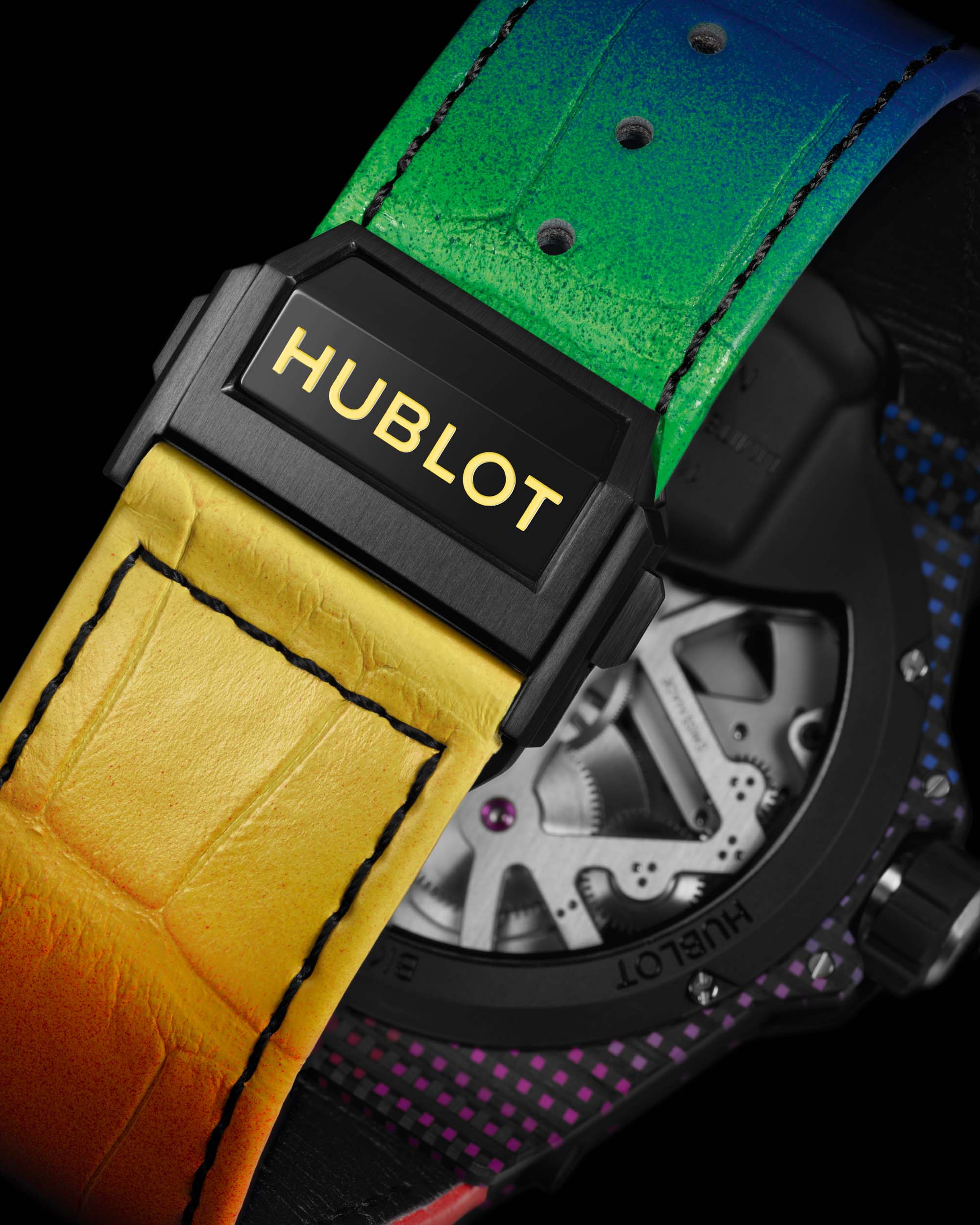 Hublot frequently makes fun, colorful, and unapologetically expensive watches, yet even among its catalog full of bold designs, the MP-09 series represents what is arguably one of the brand’s most exotic and “out-there” offerings, and this new Rainbow edition of the watch is easily the most statement-worthy version that the brand has produced thus far. With that in mind, it does come at an $11k premium compared to its single-color siblings, which gives the new Hublot MP-09 Tourbillon Bi-Axis Rainbow 3D Carbon an official retail price of $211,000 USD and production limited to just 8 pieces worldwide. In my opinion, the rainbow-colored carbon fiber succeeds in creating a sporty rendition of what has generally been a color palette expressed by gemstones, and if you’re looking for a six-figure rainbow watch that specifically isn’t a gem-set one, then this might just be right up your alley. However, arguably more important than the watch itself is what this new process for coloring carbon fiber might mean for future Hublot models. Rather than being limited to the natural patterns of the material, this new process means that individual color patterns can be intentionally created, which has the potential to unlock a wide variety of different possibilities and may be a technology that eventually trickles down to some models on the more affordable end of the price spectrum. For more information, please visit the brand’s website.