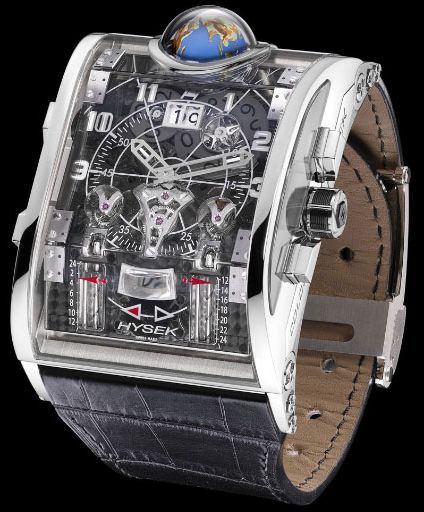 I am afraid that the current state of the watch industry is not primed to appreciate watches like the Hysek Colosso. Today, fashion, looks, and style are very important. In essence, most of the emphasis is placed on offering watches to the super rich that look good. That is not always the case of course, and we still see interesting beasts like the Hysek Colosso.

Seeing the Colosso reminds me of the DeWitt WX-1 Concept watch. Not because they look the same, but because they are bred from the same ilk. Two technically inclined science fiction watches meant for a very small number of enthusiasts. Each year you see a couple of watches like this which are debuted at Basel World, but this is certainly a very interesting model, from Hysek which is not typically a company to release such grand example of watch excess.

The Colosso is really not a very pretty watch. While it does not have an offensive shape or anything like that, it looks like a planetary spaceship (literally to carry the planet), or some wearable version of HAL from 2001 A Space Odyssey (just imagine the little revolving earth as a red and black “eye”). The watch case is in either white or rose gold and is rather large as you can imagine. The case is shrouded in a large and well cut sapphire crystal, while there is of course a see-through caseback window. The movement is a 62 jeweled manually wound in-house movement from Hysek. I am glad that Hysek did not make a mockery out of this watch by placing a tourbillon in it. Now that would just be silly. 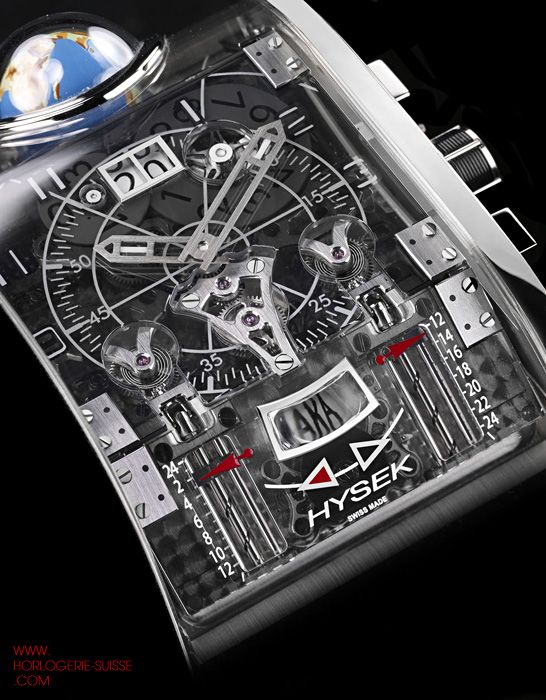 The style of the watch does not resemble most of the Hysek line. Jorg Hysek, the founder of the company is not involved any longer with the design (so I hear), and it shows. This is not necessarily bad, but it seems as though the designers attempt to work off his previous Hysek watch designs in the new ones, but can’t really figure out where they are going. They are attempting to stick with the his lauded themes, but stray in interesting directions, which is obviously the whole point of the Colosso. Other than a bit of the strap clasp and lug design, and the font for the numbers on the face, little on the Colosso really says “Hysek” to me. There is a fair amount of Richard Mille in the design however. Especially given the skeletonization, and the white colored application under the sapphire crystal used to indicate the features on the watch.

The movement has an interesting dual chamber minute repeater. The chambers are purportedly made of crystal, for a distinct noise when the gongs hit against it (Hysek calls them Cathedral timbres). There are all sorts of variations in the minute repeater functions (hour, half hour, 15 minutes, etc…). So when it is activated you enjoy a little sonorous melody that only a $100,000 plus watch can provide (the Colosso is over five times this much). I have to admit that such noises have never been bested by their digital counterparts, but I also feel as though this function is better suited to a desk clock than one on your wrist. And strictly speaking, while this is a wrist watch, it is not meant to be worn too often. The Colosso is likely to be a delicate piece of work only to be adorned on occasion. I would be surprised if for the price you didn’t get a little desk stand fro it such as with the DeWitt WX-1 Concept watch linked to above. 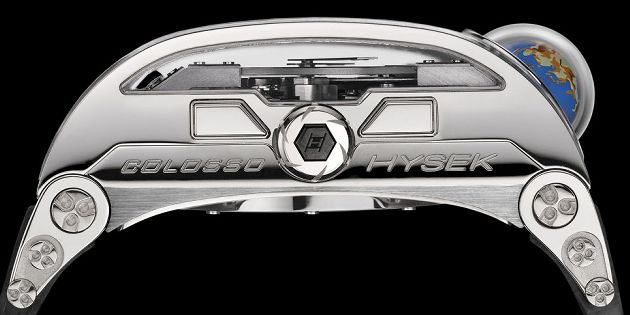 The features on the Colosso are rather interesting actually. The purpose of the Earth orb is to indicate GMT (24 hour) time, and the Earth turns one full time in a 24 hour period. If you notice on the lower portion of the face, there is a little window with a three letter word in in. This is used to display a city name, which represents on of the 24 major timezones (certain countries such as India have 30 minutes time zones). Using the pushers on the side of the watch you can scroll through the various time zones (whether you are traveling East or West). Though this is not the first watch to do this.

In addition you have a big date display and two vertical gauge indicators for two other time zones. This is nicely done, but also not a first. It might take some getting used to reading the time in this format though. Having said all that, I return to my previous point that this is a showpiece watch meant for a desk or alike. While it is useful as daily timepiece, I doubt even Hysek would recommend that. Instead, this is a serious statement for complexity, and Swiss watch maker’s own brand of science fiction. The character of this watch is enough to appreciate it, beyond merely being impressed by the price. Take for instance the “traditional” power reserve indicators used in the watch. There are at least two mainsprings in this watch that are visible under reserve magnifiers on the face. Instead of looking at a power reserve gauge, you just look to see how tightly wound the spring coils are. If they are loose, you wind it. A very simple method, but effective, and I like how Hysek emphasized it by placing them under magnifiers.

For what it is worth, the few Hysek Colosso watches are destined to be in the hands of just a few appreciating souls. It is nice to know of it though, and understand the thought and design principles that went in to it. There are going to be a lot of mixed reviews in terms of the style, and don’t expect to see large Earth displays on more watches anytime soon. Having said that, the Colosso is a seriously unpretentious watch if you look at it closely. While priced too high ($550,000), it does not scream glitz and has subtle curiosity about it. While it does not demand respect like so many other watchs in this class, it does demand the observant eye who instantly becomes inquisitive as to what this watch does, and wishes to see it in action. This itself is a difficult message to send, and the Colosso radiates it.