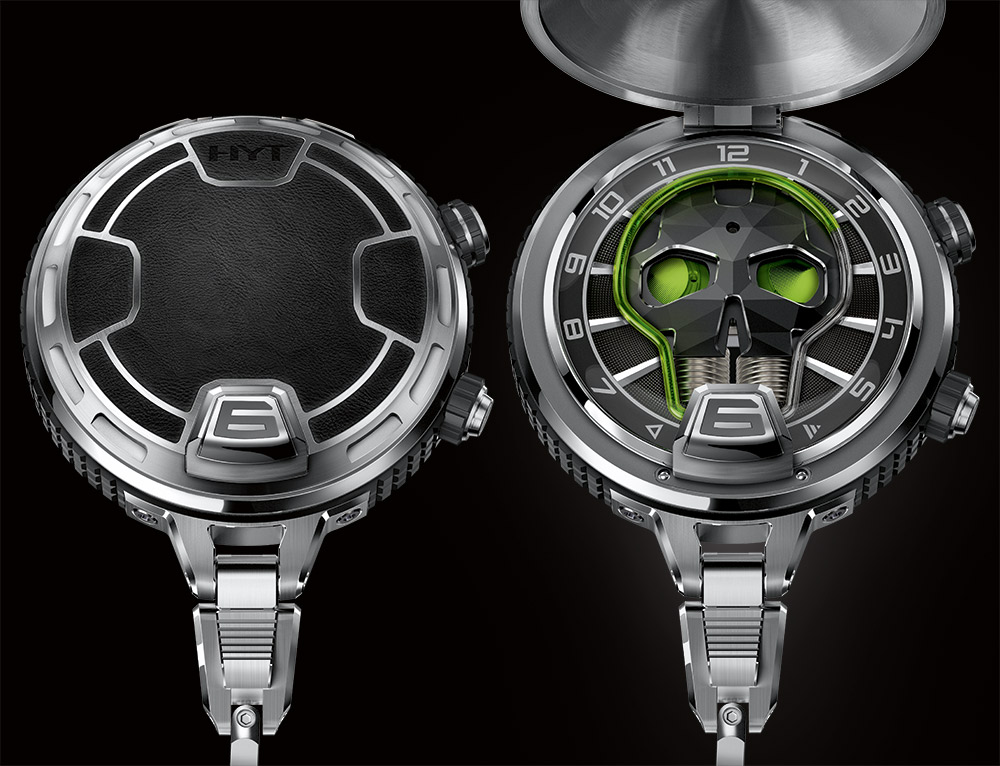 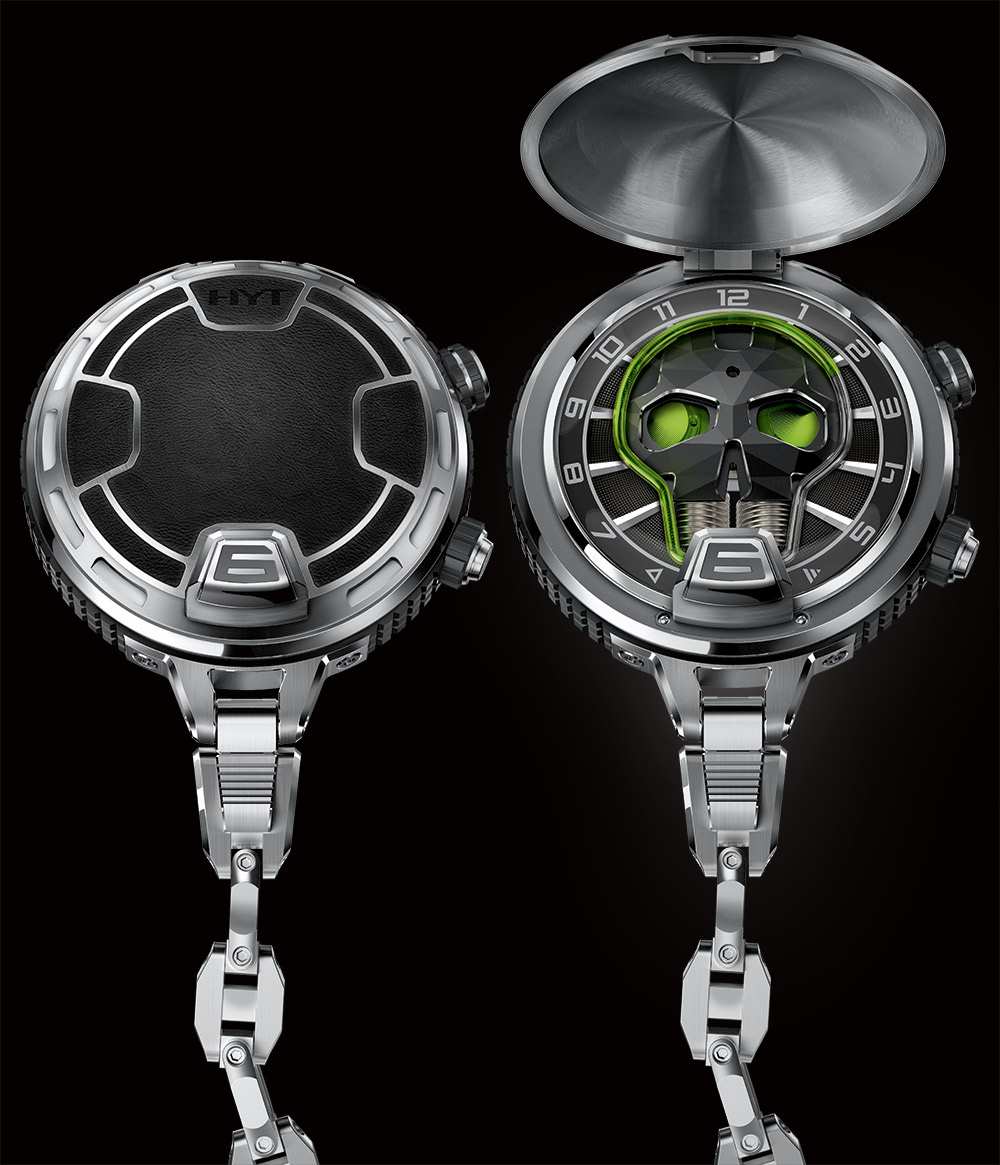 Marvel comic villains looking for a dramatic statement piece used to measure the countdown to interplanetary destruction will be pleased to learn of the newly announced HYT Skull Pocket Watch – a wild reinterpretation of the humble pocketwatch that would have its inventor, clockmaker Peter Henlein, rolling in his Nuremberg grave.

In somewhat self-congratulatory fashion, the Skull Pocket is being called “groundbreaking” and “unexpected” by its creator, co-founder of HYT Vincent Perriard. But he’s not entirely wrong, either. Characterized by the Swiss watchmaker’s faceted skull centerpiece, this highly “interpretive” pocket watch marries HYT’s signature fluid-based time-telling technology with a self-powered mechanical light source, yielding a sinister, yet wildly creative twist on the annuls of traditional watchmaking. Innovative? Not entirely, especially when compared to past HYT wrist-mounted offerings featuring the same emblematic skull motif, like the Skull Bad Boy. But wicked? Delightfully. 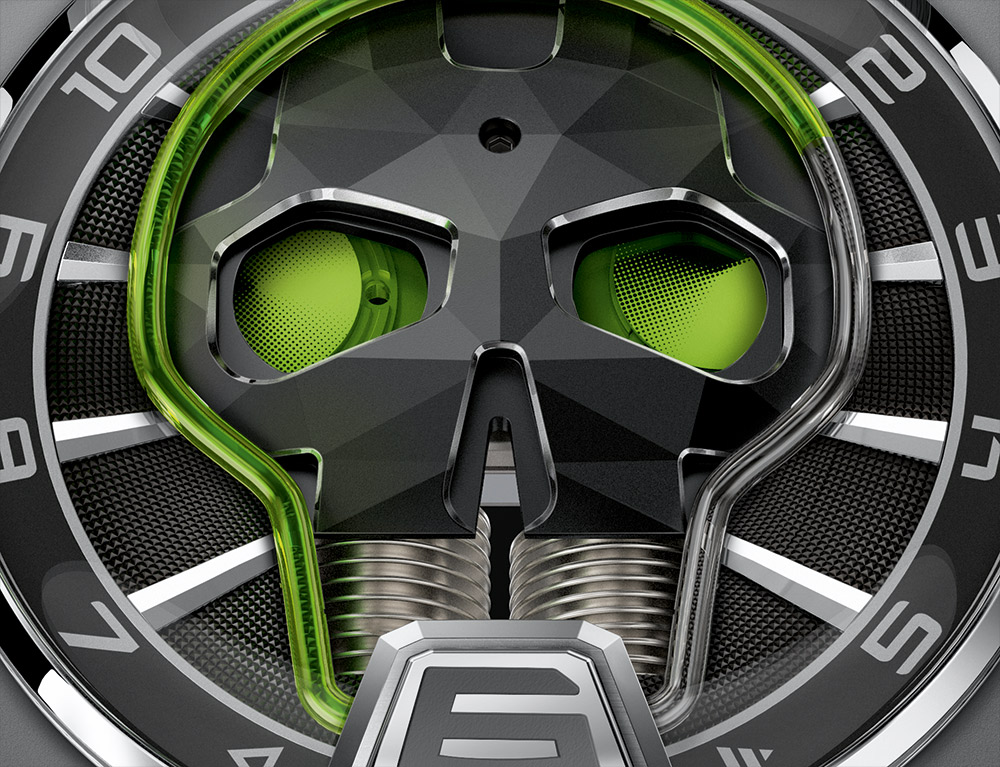 Before diving into what’s actually new with the Skull Pocket Watch… we should quickly review what makes HYT’s offerings special. At the heart of each creation is a hand-cranked, HYT-developed mechanical caliber (the guts of which are visible through the watch’s sapphire glass caseback) that hums along at the traditional 28,800Vph (4Hz) and carries a 65-hour power reserve. But instead of driving a traditional handset, this retrograde movement uses a bellows-like mechanism to push a green fluid through a capillary around the skull indicating the time by the corresponding luminous numbers in the outer bezel. Like other HYT Skull watches, the slow-moving fluid indicates only the hours on the HYT Skull Pocket – not that useful for counting down to plans of apocalyptic destruction after all. 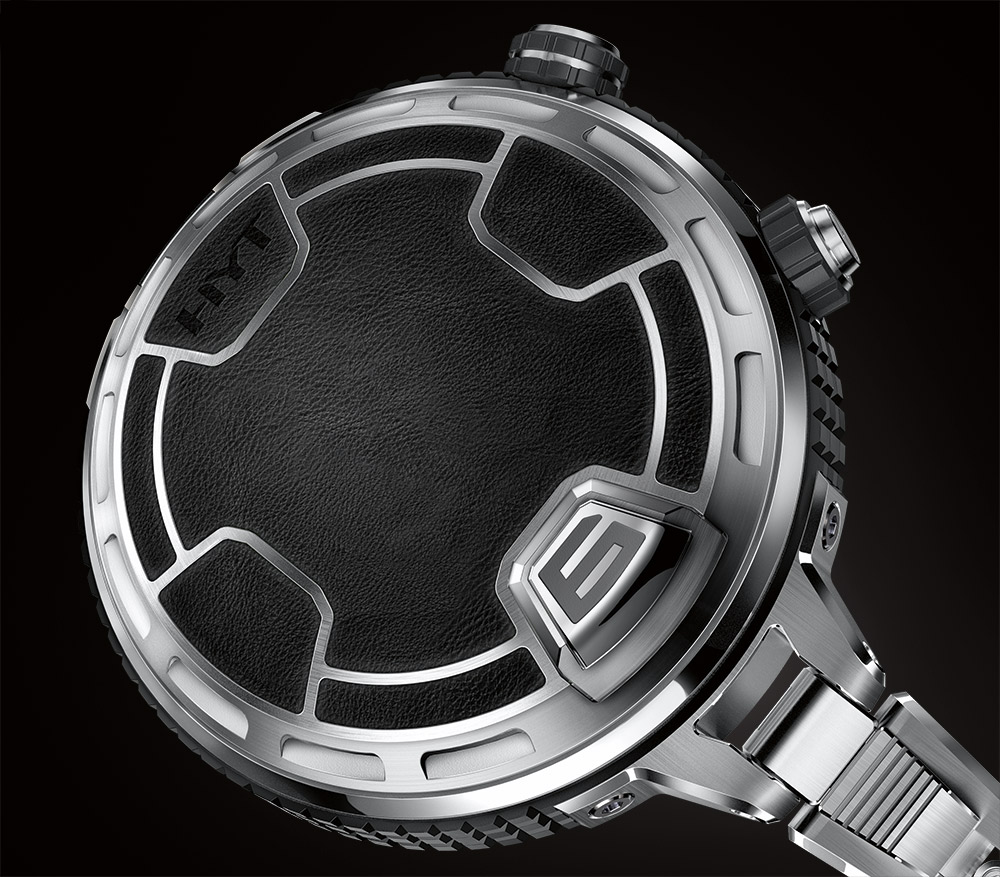 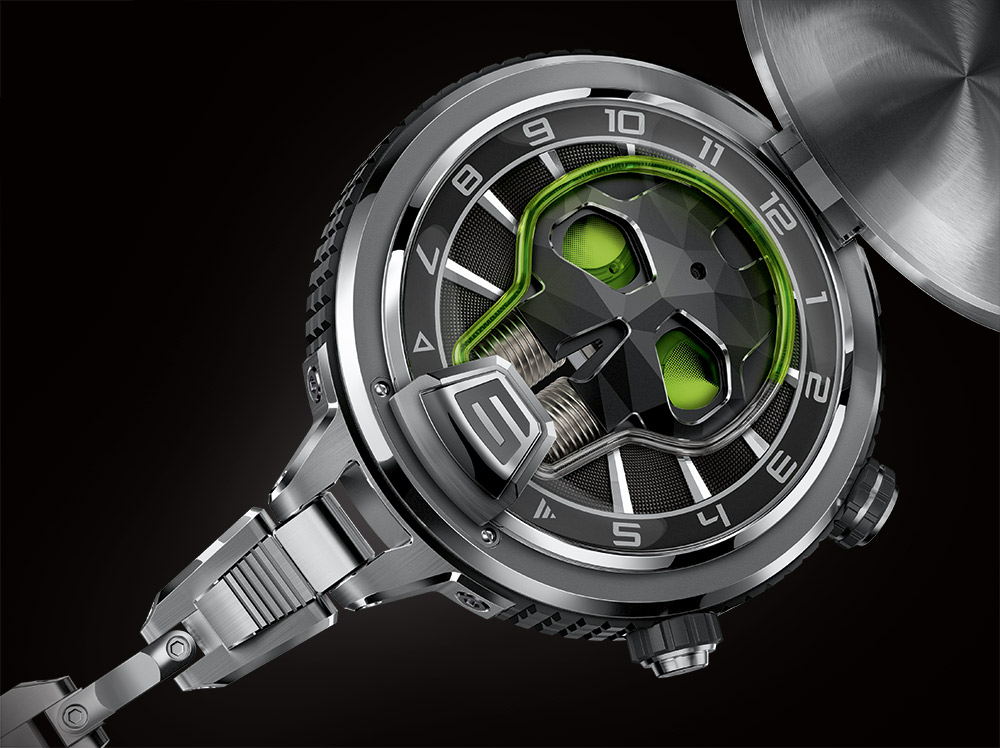 However, the Skull Pocket is also packing an interesting feature: a fully mechanical LED illumination system that operates without a battery as we saw in the HYT H4 that we went hands-on with here. Granted, this isn’t exactly revolutionary technology per se, but it’s a definite departure within haute horology. Over 80 highly miniaturized components comprise the LED lights’ generator and power-storing unit, specially designed to fit inside the watch’s curved, 59mm case. Once the generator is powered up, the push-piece at 4:30 activates two blue LEDs positioned at 6:00, bathing the skull in an eerie blue light – an effect that lasts for a full five seconds, after which the dynamo needs to be manually re-charged by turning the same crown at 4:30. 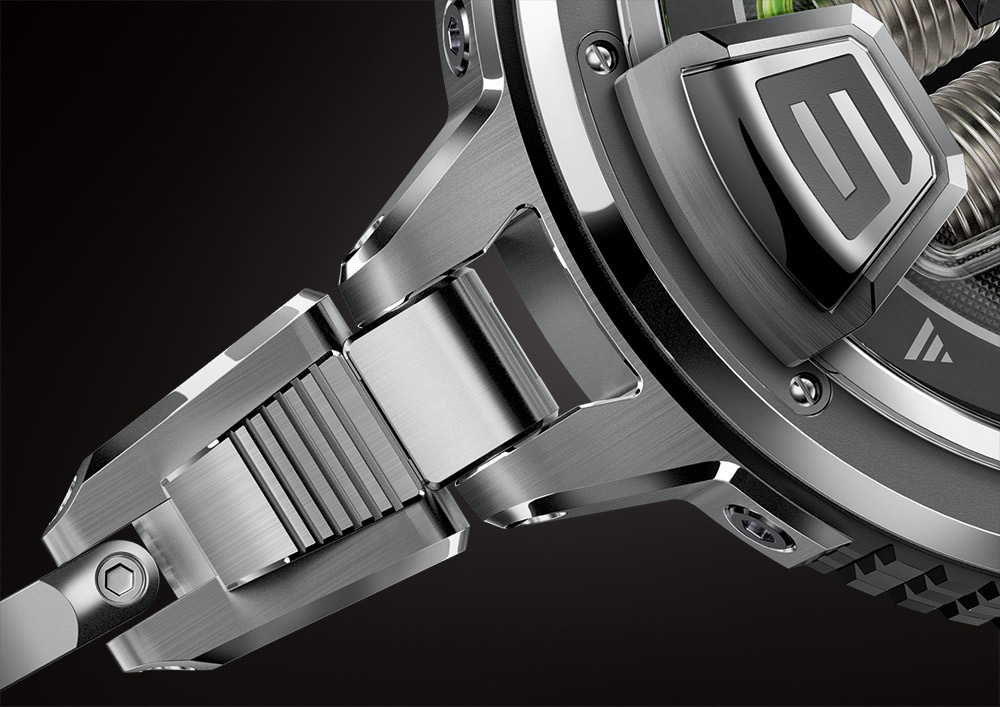 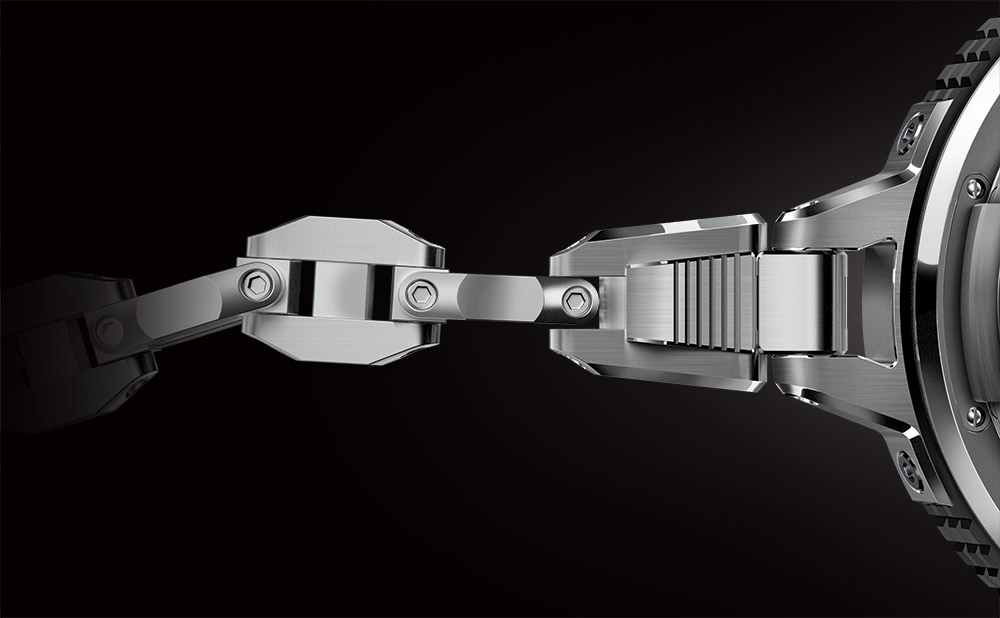 Rather than reverse-engineer an existing case, HYT designed an entirely new case for the HYT Skull Pocket Watch, opting for a DLC-coated titanium that’s as stealthy and lightweight as the size and incredulity of the design might allow. Probably about the only design cue on the HYT Skull Pocket reminiscent of a traditional pocket watch is the cover (and the chain, but we’ll get back to that in a moment) – which hinges at 12:00 after being released via the raised rider tab at 6:00. Speaking of the aforementioned, should your nefarious plans actually include carrying this thing around, the Skull Pocket is finished with a faceted titanium chain – a veritable metallic “spine” that can be easily attached to the villainous costume or adamantium exoskeleton of its owner – assuming there’s a pocket into which it can be stashed.

The HYT Skull Pocket will be made in an extremely limited run of only eight pieces, and you’ll need more than just a great costume and dreams of world domination – you’ll also need the bankroll of a super-villain to be able to add one to your collection, at a price of $115,000 (same price in CHF/EUR/USD). hytwatches.com