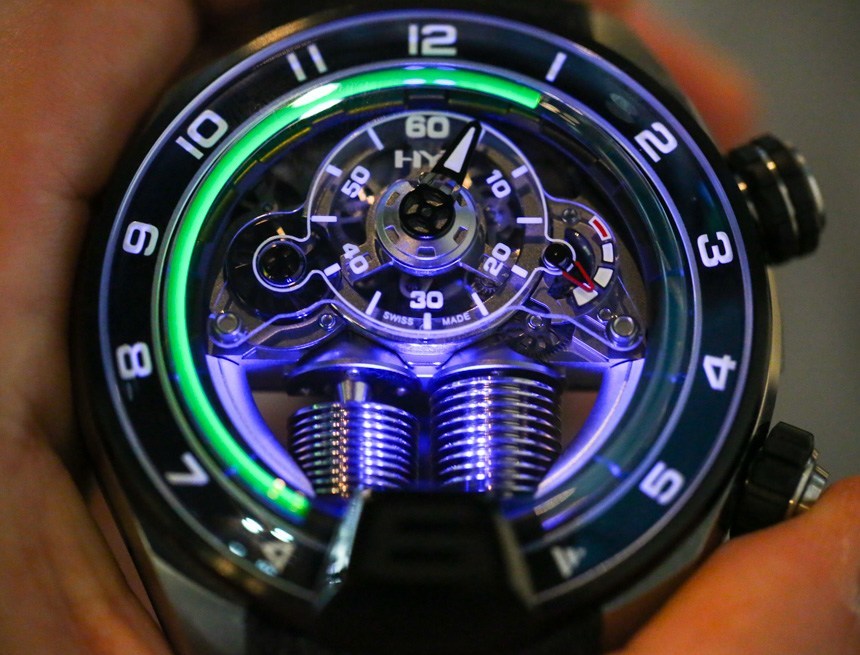 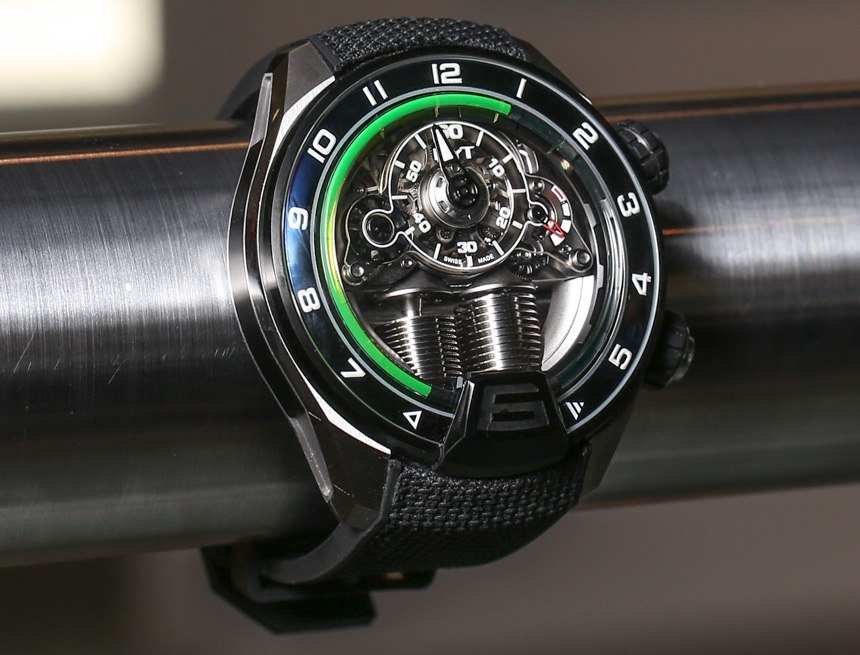 Earlier in 2015, HYT released its fourth major timepiece collection with the HYT H4 (Gotham edition reviewed here). At 51mm wide, the HYT H4 very much felt like a larger version of the original H1. Then recently, HYT made an interesting update to the H4 collection that felt like the missing element which would make the HYT H4 a special and distinct part of the larger HYT watch collection. 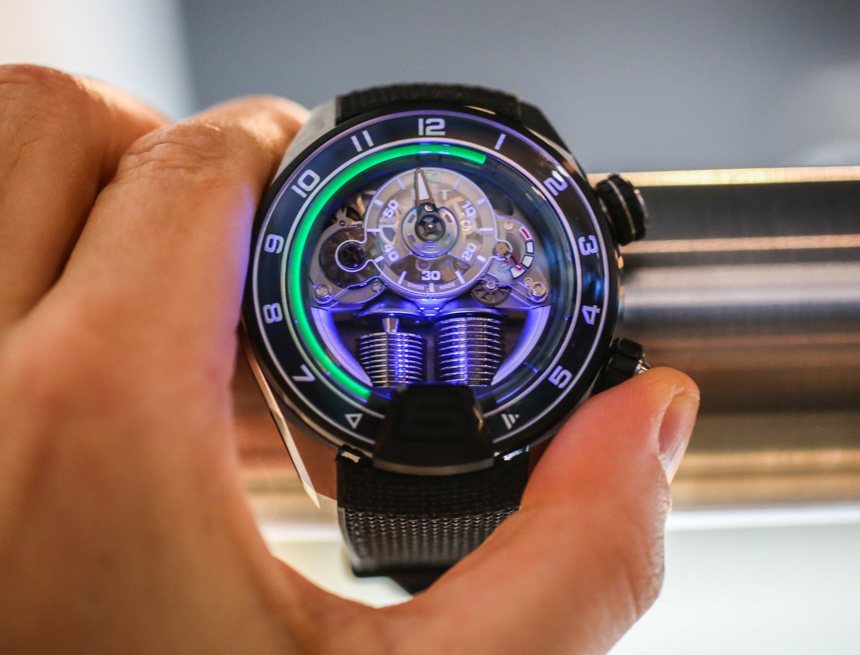 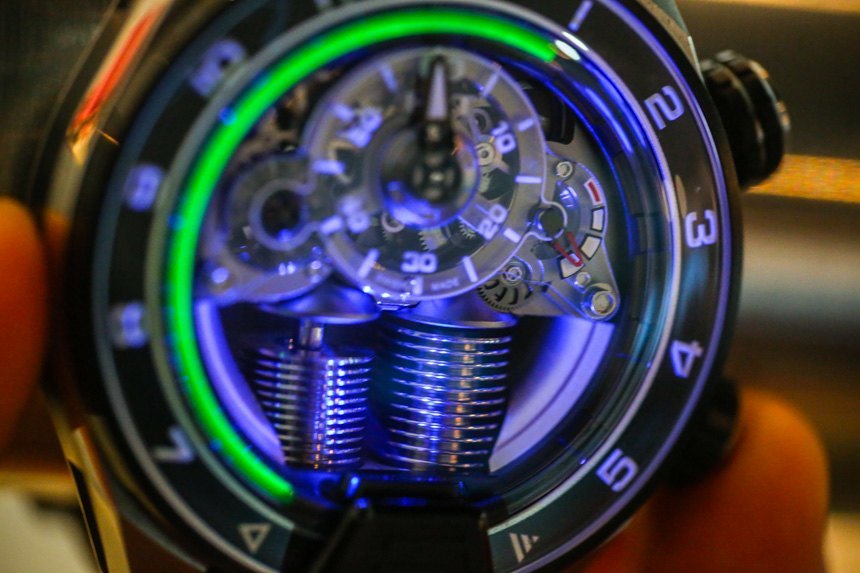 To that end, we now have the HYT H4 Metropolis which is a limited edition of 100 pieces that includes a battery-less backlight. This new “dynamo light system” was actually introduced a few weeks earlier in the HYT H4 Alinghi Special Edition watch that aBlogtoWatch debuted here. However, in that coverage, we were not able to properly demonstrate how the light system works – and for our coverage of the HYT H4 Metropolis, we can.

Looking at the 51mm-wide DLC-coated black-colored titanium case, the only obvious difference between the H4 Gotham and the HYT H4 Metropolis is the existence of a new crown on the case. This is the backlight activator and is also used to generate power. Essentially, the system uses a capacitor which temporarily stores power that you generate by rapidly winding the lower crown. That crown is also a pusher which is used to activate two small blue LED lights which are located in the case assembly at 6 o’clock. HYT, understandably, dances around the matter of what the light system uses and that it doesn’t exactly involve revolutionary technology. 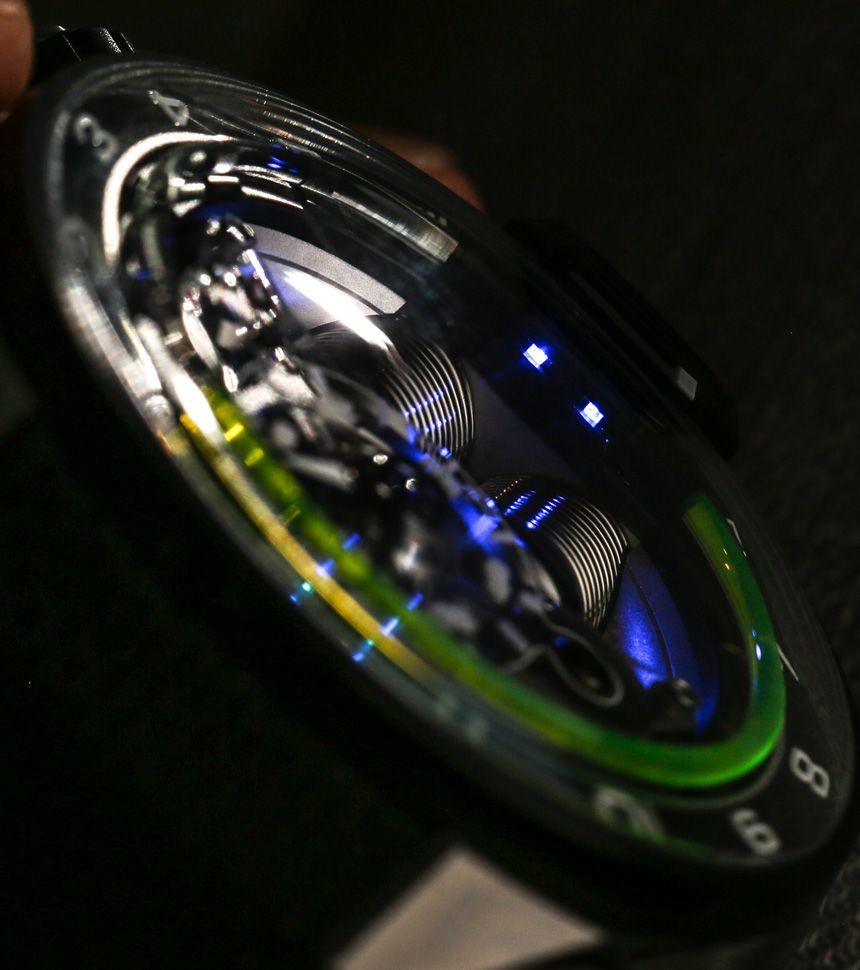 Perhaps, the biggest “taboo” of the dynamo light system is that it is electronic – but does that really matter? HYT engineered a unique light system powered by human effort to make their watches legible in the dark. If it is cool and makes for a better timepiece wearing experience, then we are all for it. On top of that, it looks really cool when the soft blue LED light illuminates the green-colored liquid in the hour indicator tube. 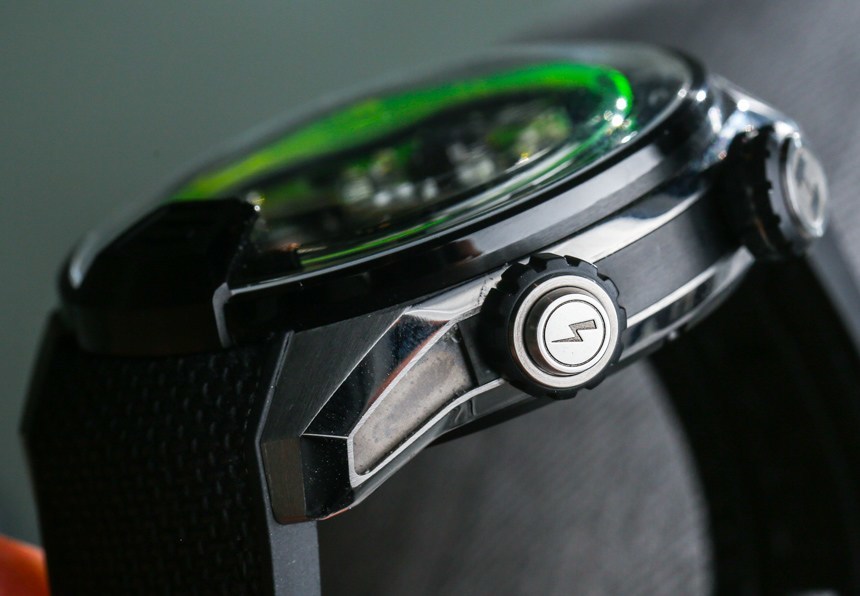 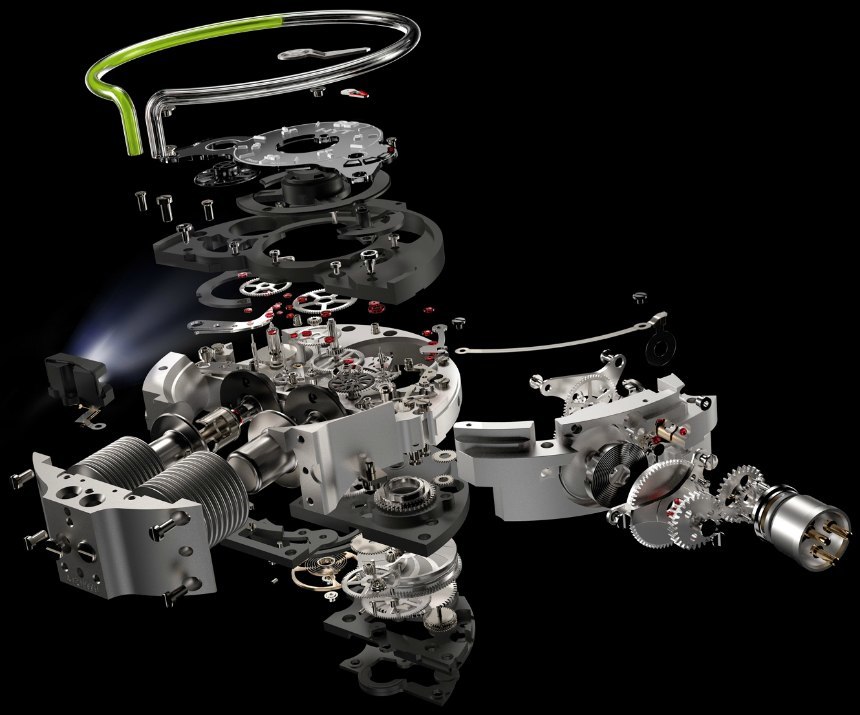 Thematically, the dynamo light system in the HYT H4 Metropolis is similar to how power is generated in the Urwerk EMC (hands-on here) which uses a hand-wound crank to generate power for an on-board electronic rate-measuring device. What any naysayers should immediately appreciate is that the electronic light system is totally independent from the mechanical movement powering the rest of the watch. 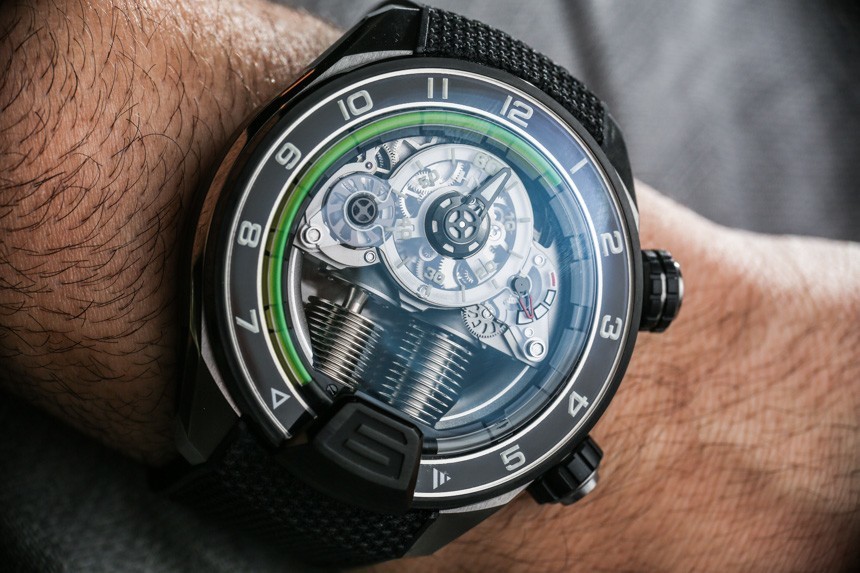 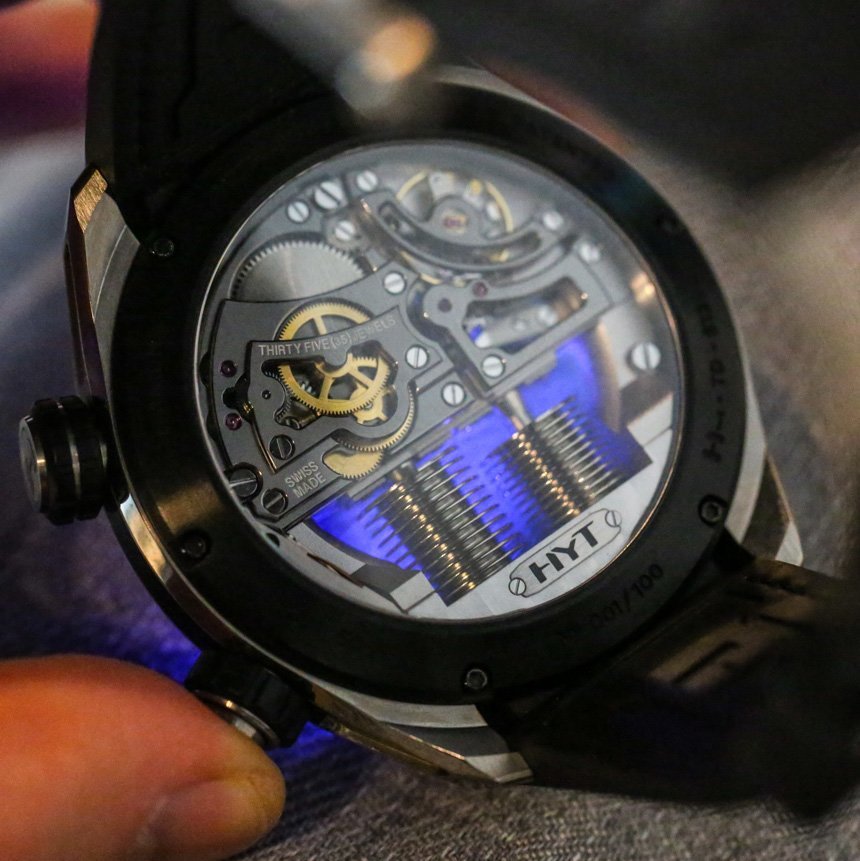 The movement – produced exclusively for HYT – operates at 4Hz with a 65-hour power reserve. Liquid in the tube is used to indicate the hours, while more traditional indicators on the dial are used for the minutes, seconds, and a power reserve indicator. With black, steel, and green tones, the aesthetic style of the HYT H4 Metropolis hearkens back to the look of the original HYT H1 watch from 2012. 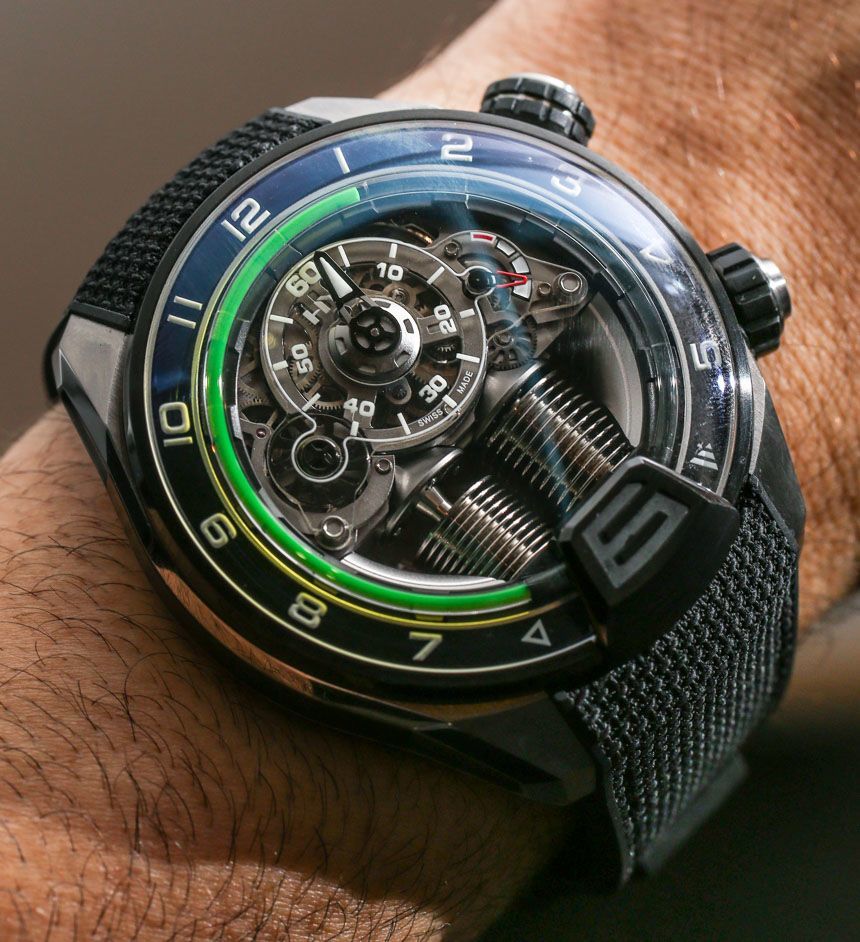 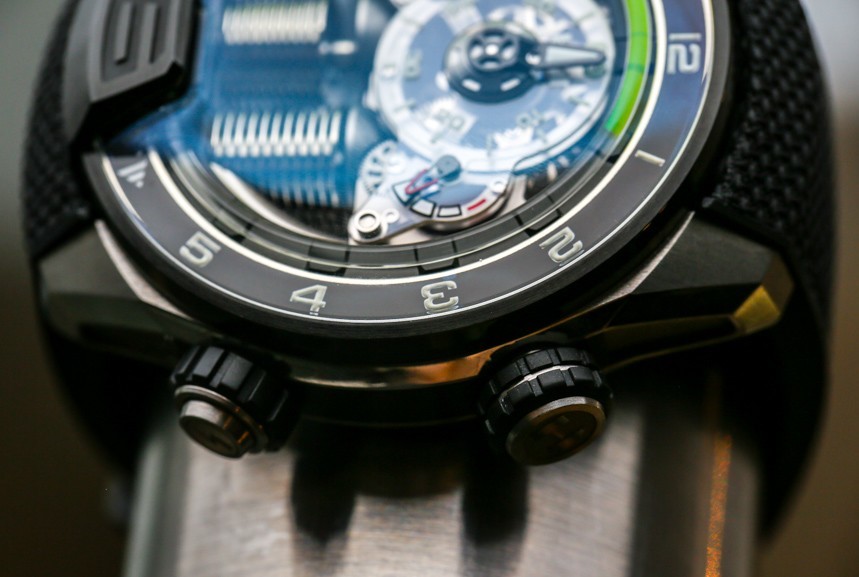 HYT watches have never been known for their subtle wearing or discreet sizes. At 51mm wide and 17.9mm thick, the HYT H4 is a beast, but it wears comfortably. I would put it in the category of “intentionally large” watches meant to extend past the edge of your wrist and, oddly, still look fun in the process. If you complain that the HYT H4 is too large, then you are sort of missing the point. It is meant to be large and still be comfortable to wear. It is all about visibility, and with a light system, that fact is even more pronounced. 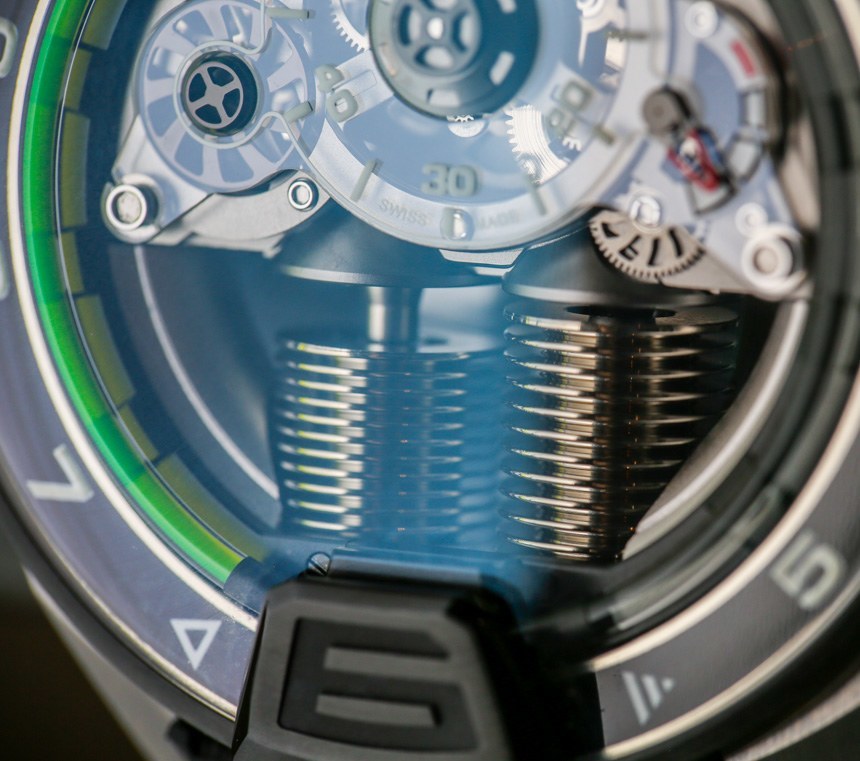 I hope that HYT stress-tested the light system as much as possible because, frankly, it is very fun to play with. The light lasts for about 5 seconds, and if you keep your finger on the pusher, it elegantly fades out as opposed to just switching off. I also have to say that this is one of the funnest G-Shock watches I’ve ever worn 🙂 Yes, I love it when luxury Swiss watches adopt some of the cool things we’ve seen for years in Japanese sports watches – all for a new audience, right? 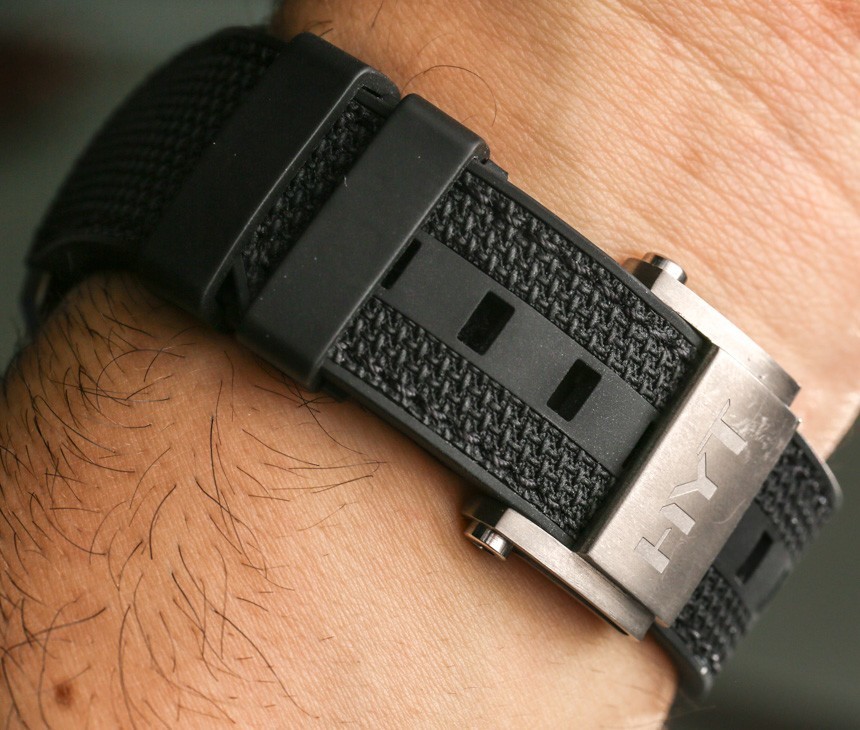 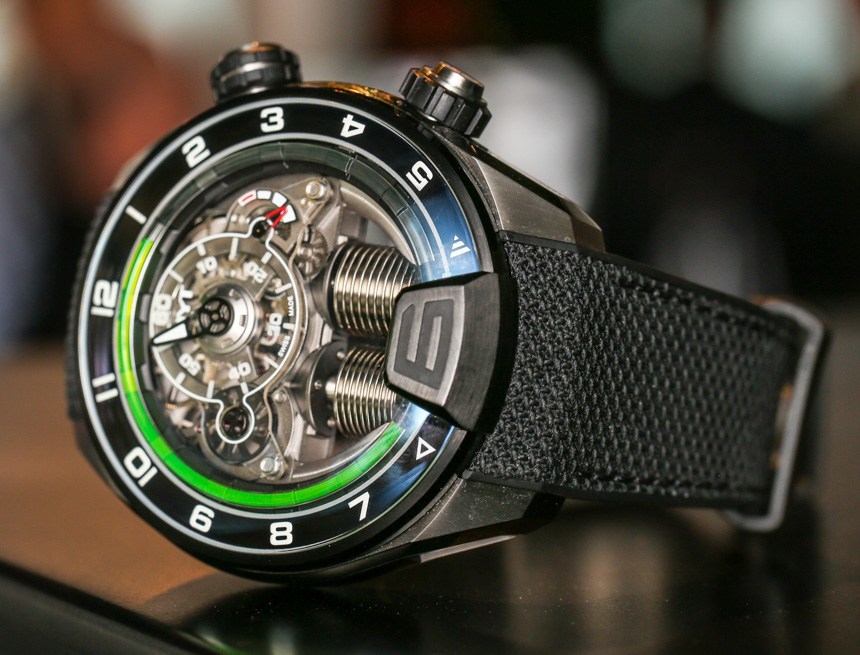 Attached to the limited edition HYT H4 Metropolis is a rather nice black Nomex and rubber strap which rounds out the package nicely. A good thing is that the watch feels relatively light, as well, given its massive size. Limited to 100 pieces (the H4 Alinghi watch is limited to just 25), price for the reference 512-TD-45-GF-RN HYT H4 Metropolis limited edition watch is $94,000. hytwatches.com