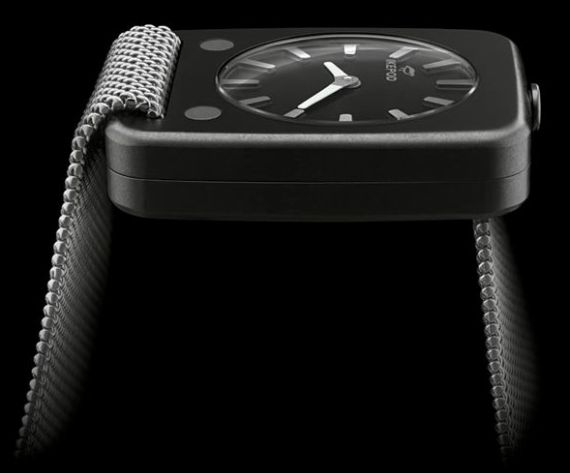 Ikepod is designer Marc Newson’s quirky but cool watch brand. From its inception, most of his watches shared the same round bulbous look and had model names like “Hemipode.” The watches are very cool and very hard to come by with extremely limited distribution (only two authorized dealers in the US). Despite their rarity, Ikepod watches have always intrigued me and looked like they enjoyed more than niche product appeal. Further, their modern looks being minimalist and all, are still very functional, with some of the existing models offering very complex features.

Well, Marc has taken a completely new direction with the new Solaris lines of watch. Not only is the shape of the watch case square, but the overall theme of the watch is totally different. Rather than a soft futuristic look, the Solaris watches are retro chic. The case itself looks like an appliance dreamed up in pre-space age 1950’s and 60s, but with cleaners lines. Maybe what art deco might have evolved into if industrial design took a different path in the middle of the 20th century.

The case is a simple rounded, sandwiched square. The dial is round, unpretentious and frames the applied hour markers and hands with pristine clarity. The crown is placed at the top of the case (as opposed to the side), and is a flattened. Still, It is probably easy to operate when pulled out. It might not be comfy for manual winding, but the watches have quartz movements (don’t gasp), so no worries with winding. Two rivets on the case delete any notion of boredom from the design suggesting a sense of mechanical engineering to the basic looking device. The Solaris watch line is available in several different materials from 18k yellow or white gold, as well as white and black ceramic.

You don’t see mesh or woven metal bracelets a lot, but you do here. Mesh metal bracelets used to be common on diving watches, and I am glad they are making a comeback. They are hard to make, and hard to take care of, but with non tarnishing metals today, the latter of those two concerns might be moot. Probably the most interesting design choice is having the bracelet attach on the front of the watch on one end, and behind the watch on another. I’d have to see it applied to my wrist to further comment on its effectiveness. You can tell from the image gallery below that there are a few well-chosen color options. I think I like the white and black two-tone the best, or perhaps the featured all back model shown above. Prices are pretty steep given the movement at between 6,700 and 24,000 Euros.  Check for the Ikepod Solaris watches available, someplace, soon.