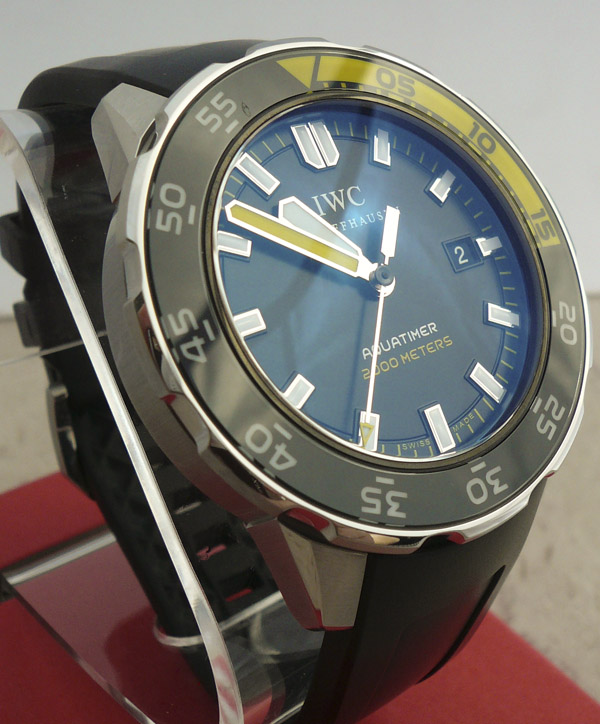 Gorgeous, isn’t it? This is the IWC Aquatimer 2000, reference 3568-02. Introduced in 2009, the 3568 (the 02 suffix denotes the rubber strap version) replaces the internal-bezel 3548 model. Bolder in design, the 3568 retains the ETA-based 30110 movement (2892-A2 base), but upgrades to a sapphire-coated conventional bezel with spectacular six-layer underside SuperLumiNova. It’s also available with bracelet, a white-dial version, and a limited edition with orange-on-white. 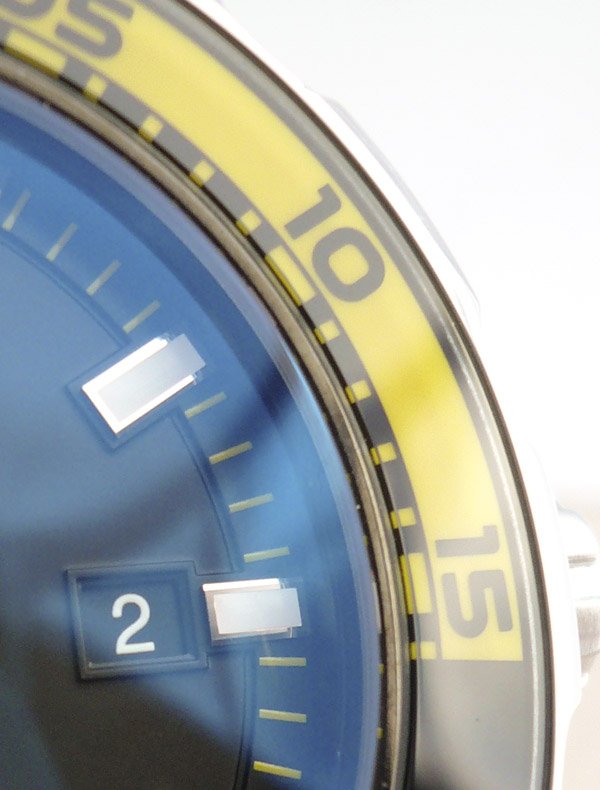 The main crystal is domed and anti-reflective on both sides, but the bezel is mirror flat and un-coated, which makes for interesting reflections and highlights. I love the idea of putting lume on the underside of the bezel; that combined with the durability of sapphire makes a bezel that’ll remain shiny new for the life of the watch. Brilliant! Even better than the non-lumed Rolex and Omega ceramic bezels. As an aside, there are a handful of other watches with lumed sapphire bezels if you like the look – Blancpain Fifty Fathoms, Omega Ploprof, Bremont Supermarine, and I wouldn’t be surprised if others went this route at Basel 2010 and beyond. 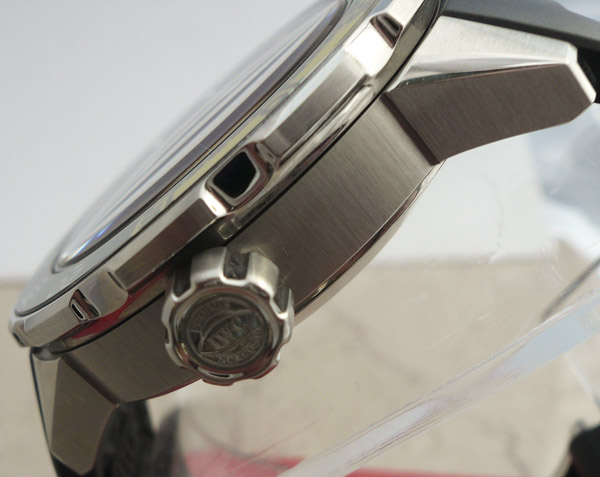 Other than the eye-catching yellow, the case and watch are remarkably low-key, with predominantly brushed finishing and a lack of reflective surfaces. In person, it’s startlingly low-key due to the mostly-black dial and bezel, and has drawn few if any comments. As you see here, IWC doesn’t put crown guards on their divers, which is one of my reservations about the design. I have a friend who lost the screw-down crown and case tube on his Fortis to the strap of a falling carry-on bag, so I would assume this to be less durable than a recessed or guarded crown. An odd design decision on a watch rated to over a mile of depth! (2000m). IWC, rather than adding a helium escape valve, simply designs their divers to cope with a negative pressure rating. A superior piece of engineering for the saturation diver. 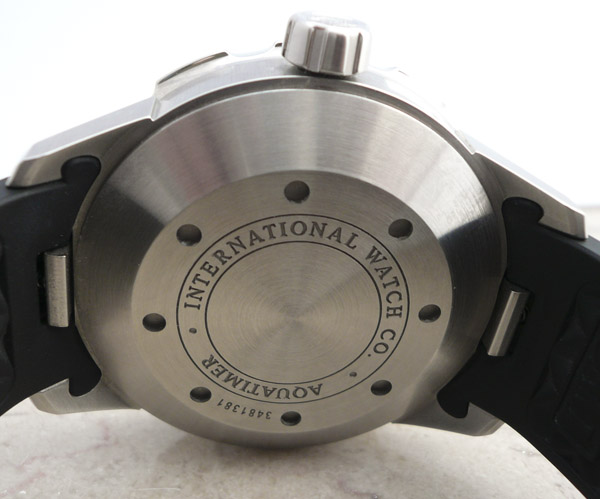 The simple caseback shows the other design feature I dislike – the quick-release strap and bracelet system. Unlike almost every other watch out there, the Aquatimer series use a lever-release system that IWC licensed from Cartier. It’s really cool, requiring just the tip of a finger to release, but since it’s proprietary the only place in the world outside of IWC that makes straps is the very expensive ABP of Paris. Having emailed ABP, their least expensive strap to fit would start at 250 Euros… wow. That’s still much cheaper than IWC, though, who want $360 for a Velcro strap, $400 for the rubber and a rumored $1500 for the bracelet! IWC has done proprietary lugs since the iconic 3536 diver, though the design has changed with each generation, so it obviously makes sense to them. So while the system works well and is certainly convenient, it does make purchasing your own straps, or replacements straps and bracelets very expensive. 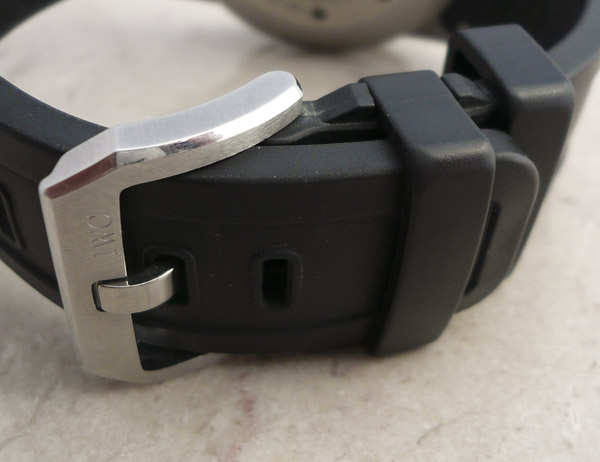 It’s a nice rubber strap and buckle, but $400? I’ve got the Velcro on order, from what I can tell it allows the use of normal 19mm straps, and am keeping an eye out for a used bracelet. It’s a serious caveat and cost, so if you buy one keep it in mind. I will say that the rubber is superbly comfortable, which is very important because this is a large, heavy watch: 44mm by 14mm, 145g. Despite all of that mass, it’s super comfortable on my 7.25″ wrist and I’ve worn it to run, cycle, swim and sleep. 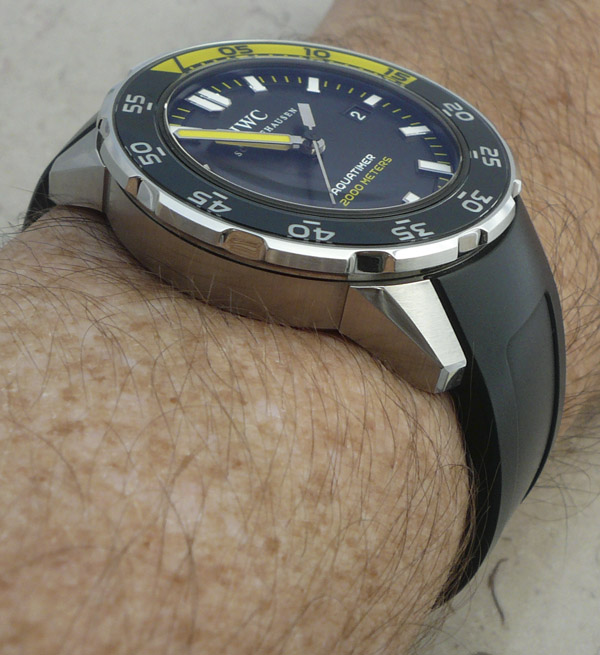 Due to the caseback shape, it sits quite low and comfortable on the wrist, and doesn’t flop around like some taller watches I’ve worn. The double AR and domed crystal combine for stupendous visibility at a wide range of angles. You can also see that IWC uses a vertical black flange ringe; functional and invisible. The angled ‘ROLEXROLEXROLEX’ on current Rolex models for example is one of my pet peeves of flange ring design. Not an issue here on this IWC. The 14mm height is reasonably shirt-friendly, and since the strap is plain-surfaced you can get away with wearing it with dress shirts. 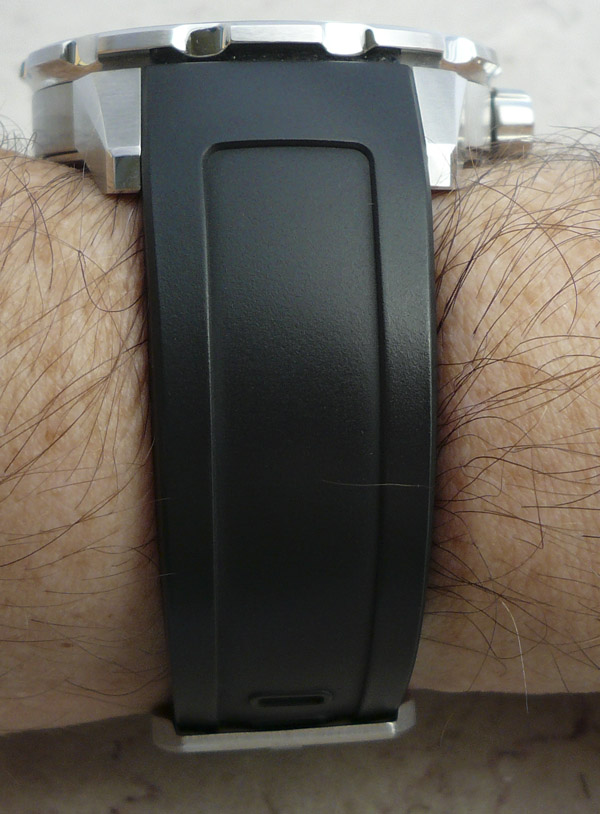 The bezel is 60-click, which is kind of annoying in a minor way, and could use a bit more surface roughness when wet. The movement is a Top-grade ETA 2892, with unknown changes from IWC. According to other reviewers, it’s hand-adjusted and mine is certainly the most accurate mechanical watch I’ve had, running +2 seconds per day, no matter what. Winding is so smooth that it’s actually hard to discern, and the crown threads are easy to engage and butter-smooth. (Nicely signed crown, too.) 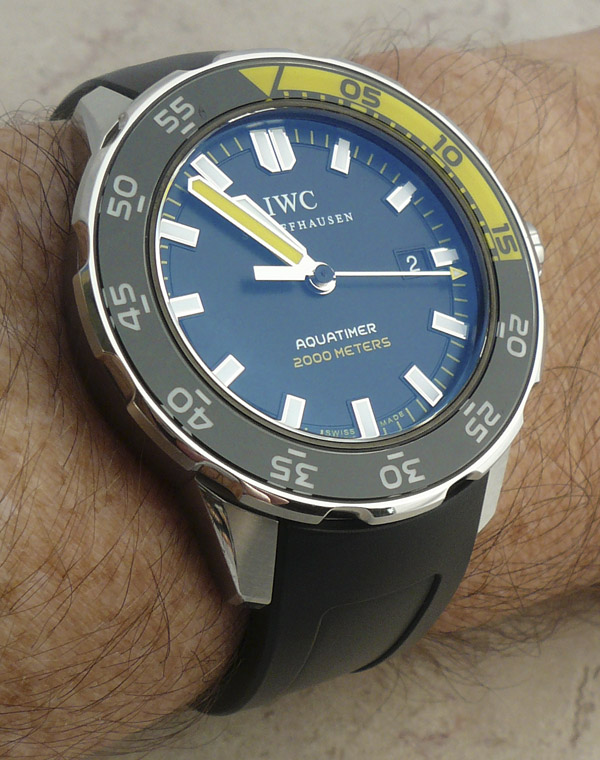 Notice here the perfect edges and finish on the hands and applied markers, the dual-level date window bevel and split minute ring. Also see the two-color second hand and subtle ‘Swiss made’ inset into the minute markers. Really nice and well thought out design here. Note also the subtle use of ‘signal yellow.’ The tip of the second hand, ‘2000 meters’ text, minute markers too and the minute hand matching the bezel. Not sure what I think of the retro font on the lower half of the dial, but it works as a piece. 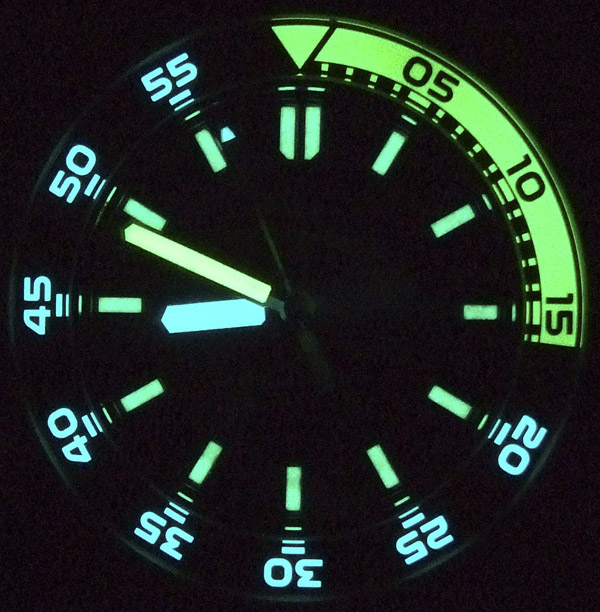 Luminosity is, well, amazing. It’s not as bright as some Seiko’s lume, but the dual-color scheme and glowing bezel come alive in the dark. It makes the watch seem larger at night, since you don’t normally see the bezel. Since I’ve a new daughter, I can testify that it’s visible at any hour of the day or night, and that the lume rocks. On the minus side, the second hand is only a tiny triangle of lume at the very tip, and is quite hard to spot. I think that this is a modern classic. Bold assertion, but the design is functional, original and confident without the bling or being too large. Adding a sapphire bezel and AR on the crystal greatly improve usability, and the 2892 is a killer movement. Retail price for this version is $4,400. Add a thousand or so for the bracelet and it goes up to a retail price of $5,400 – which I’d look for if I were buying one today. Look around for what you can fine. There are a few color variations, and the piece is also offered in chronograph form. I have no hesitation about recommending the IWC over a Submariner or Planet Ocean. This is a fantastic watch, full stop.