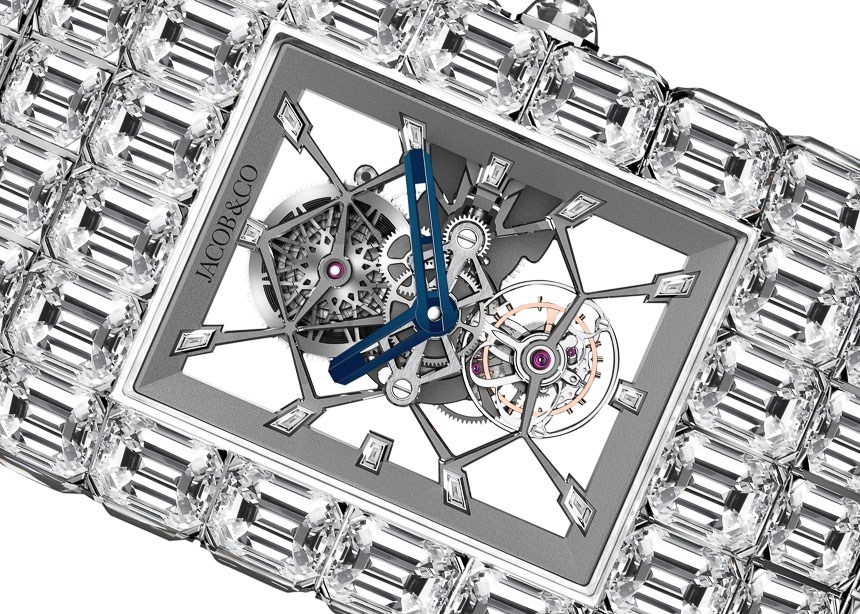 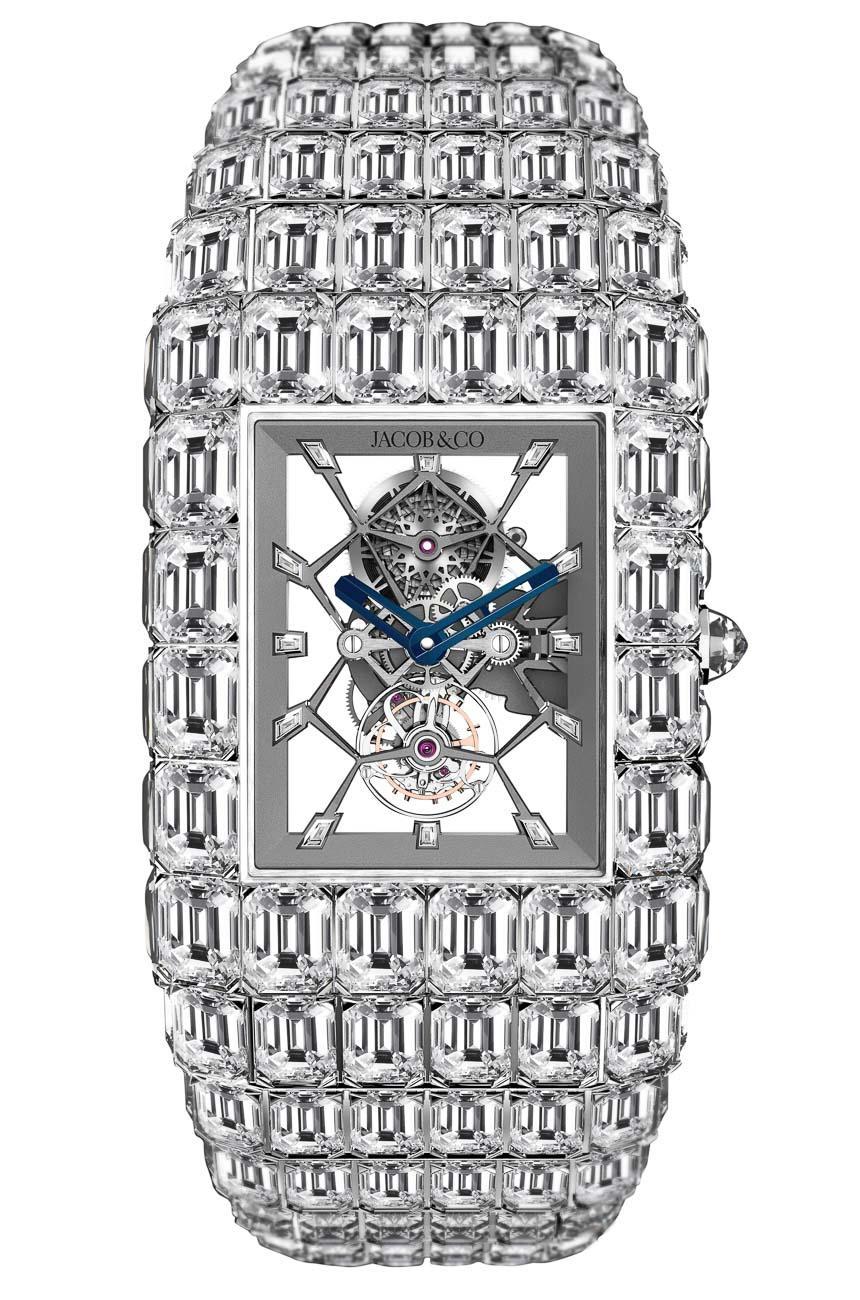 The 2015 Jacob & Co. Billionaire Watch is a one-of-a-kind timepiece produced with Italian businessman, fashion label owner, and Formula 1 personality Flavio Briatore. It turns out that the watch was done with him, rather than for him, as an item with his Billionaire brand logo on it. As a manifestation of sheer luxury and excess, timepieces like this often live in a vacuum, with us learning about them, but having only guesses as to the type of people who own and buy them. This is one of the rare instances where the type of person who likes this type of timepiece participated with the brand who made it and publicly exclaimed “yes, I had them make me that watch.” Finally, we can start to shed light on the all to common question of “who wears this stuff?” Italian business people like Mr. Briatore are who.

Jacob & Co. founder Jacob Arabo is one of the most interesting and controversial characters of the modern watch industry, and to a similar degree, so is Flavio Briatore in his respective industries. Both men have had run-ins with the law, but at the same time, need to be credited with a lot of risk-taking (that didn’t always end well for them) and thinking outside of the box. Each of these men define one extreme definition of the term “businessman,” and offer some of the boldest products around (which inherently means you’ll love or hate what they do). Speaking of watches, in these images of Mr. Briatore, he appears to be wearing Italian Buti watches – which is a now defunct brand. 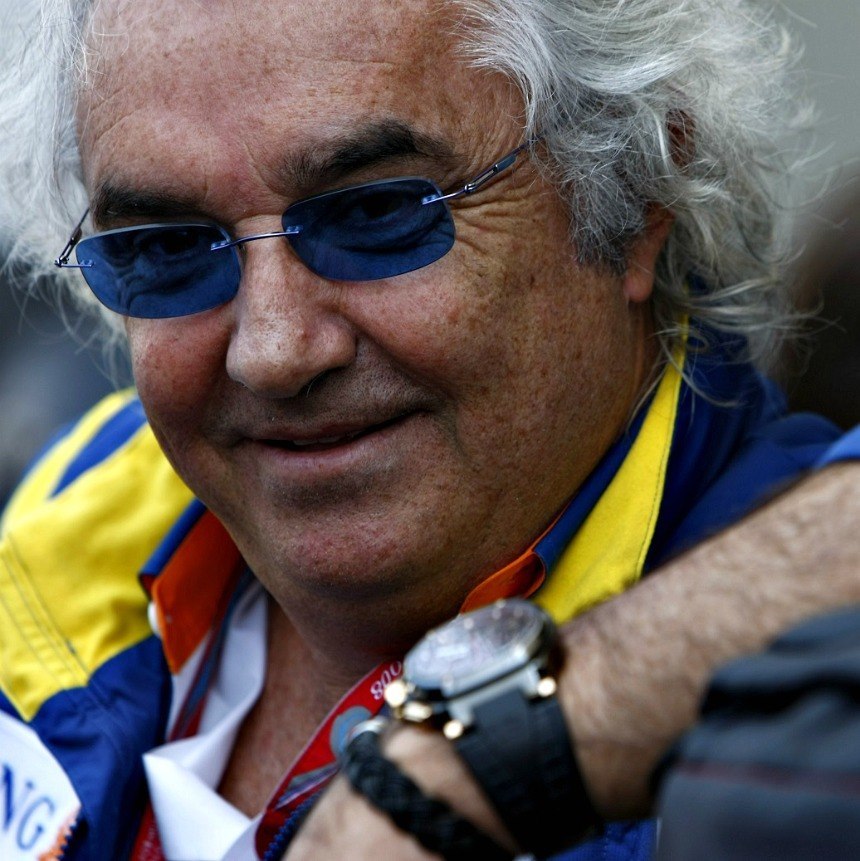 The Jacob & Co. Billionaire watch is named as such not because it costs a billion dollars (not quite), but rather because it is made in honor of Flavio Briatore’s Billionaire Couture clothing and accessory company. It takes audacity to sell $1,000 jeans and $500 swimming trunks, not to mention the typically loud Italian look which includes black and yellow snakeskin leather jackets and patterns that even Versace might think are a bit loud. Sequin-studded men’s tuxedo jacket anyone?

It’s all very expensive and anything but egalitarian. Brands like Billionaire Couture and Jacob & Co. are there to satisfy the needs of people who not only have a large amount of disposable income, but also feel the psychological need to show it off. It is their right to show off if they choose – and by nature, it will piss off many who view such behavior. I wouldn’t call extravagant displays of wealth a sure way of getting respect and affection from your fellow people, but it is a way of making it clear to people that you’ve probably worked hard, and that you are keen to show others how well it paid off. I think that goes back to the whole debate we hear in mafia movies of whether it is better to be loved or feared. 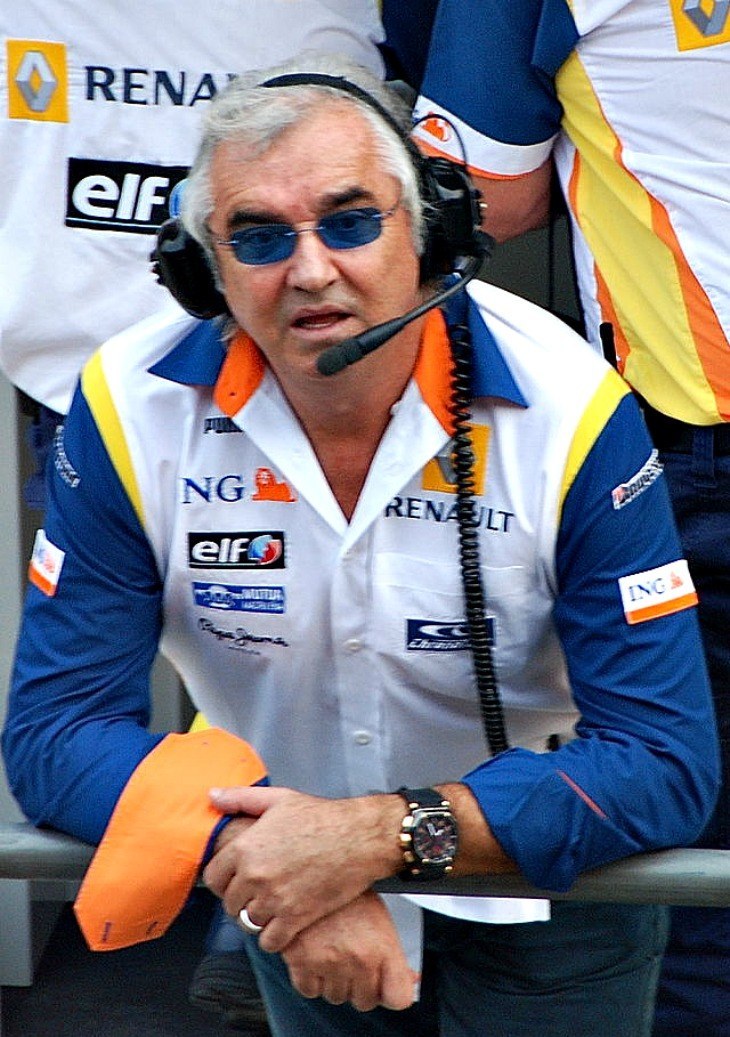 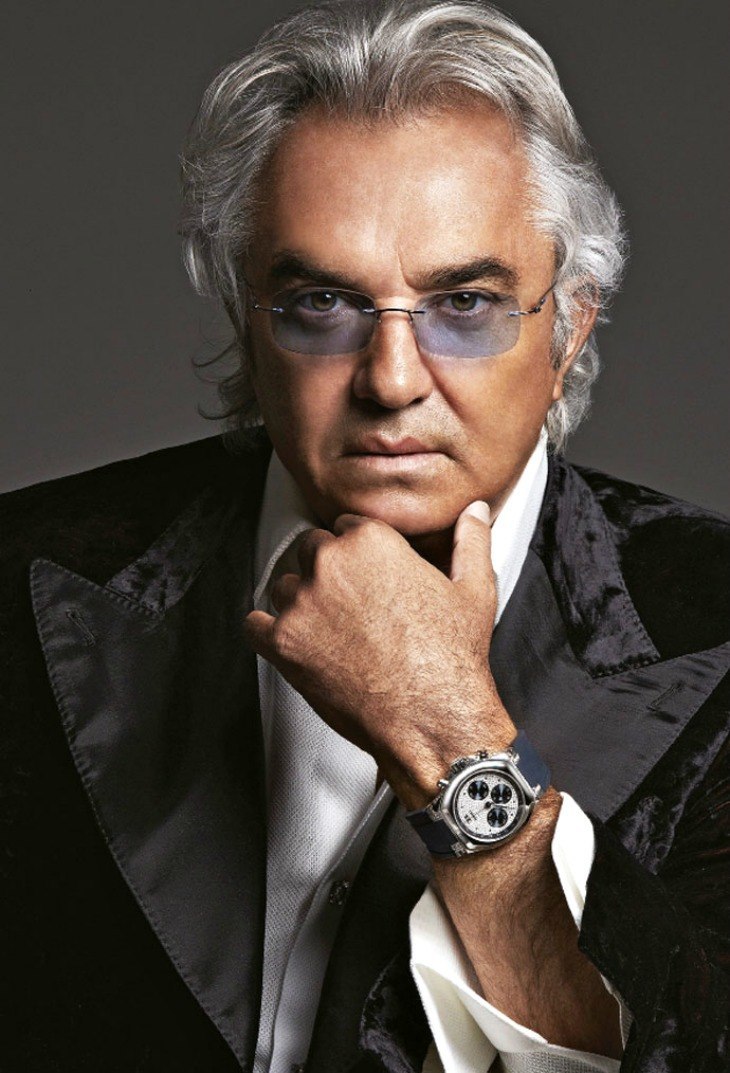 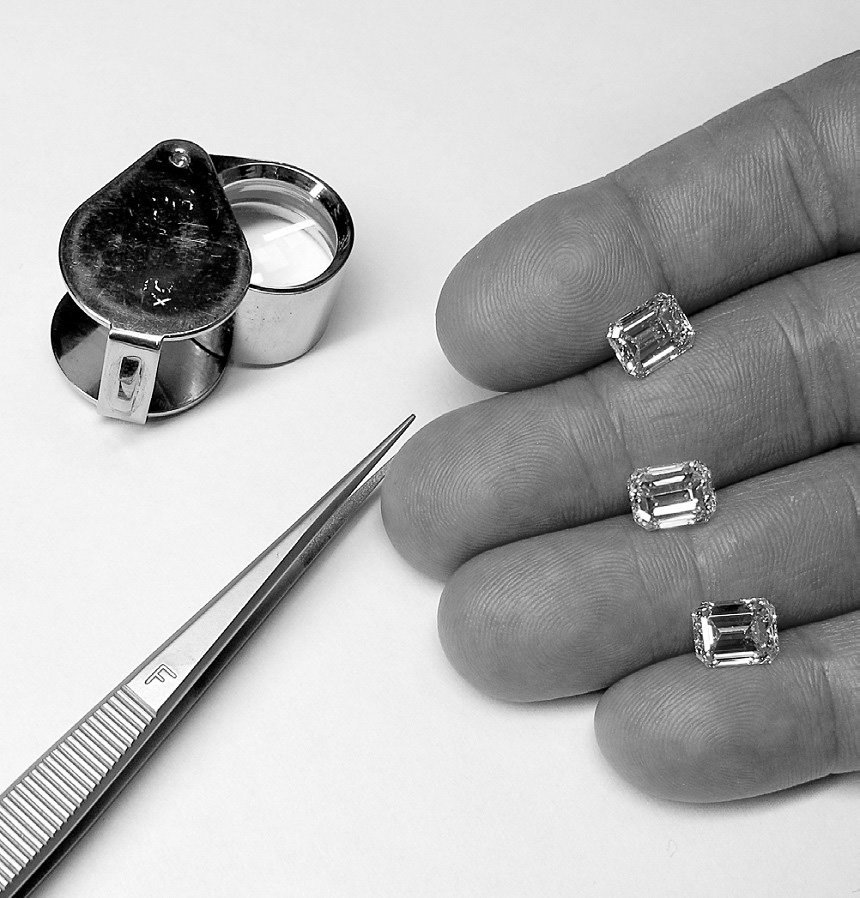 So, in collaboration with Flavio Briatore, Jacob & Co. set out to create a watch that was gem-set and extremely opulent. The overall shape and design reminds me of last year’s $55 million Graff Hallucination watch that uses various colored diamond stones. Compared to the Graff Hallucination timepiece, the Jacob & Co. Billionaire Watch is downright tasteful (and a lot less expensive). Well as tasteful as a watch is with a case and bracelet all merged together produced from 239 emerald-cut baguette diamond stones. Jacob & Co. claims that some of the stones are up to 3 carats each, and the total diamond weight of the Jacob & Co. Billionaire Watch is about 260 carats.

The Jacob & Co. Billionaire Watch isn’t petite either. Even though it might look like a women’s watch in pictures, the case is 47.5mm wide and 58mm tall. Somewhere in there is an actual case for a watch movement and dial. This rectangular element is produced from 18k white gold and houses an exclusive to Jacob & Co. mechanical movement. 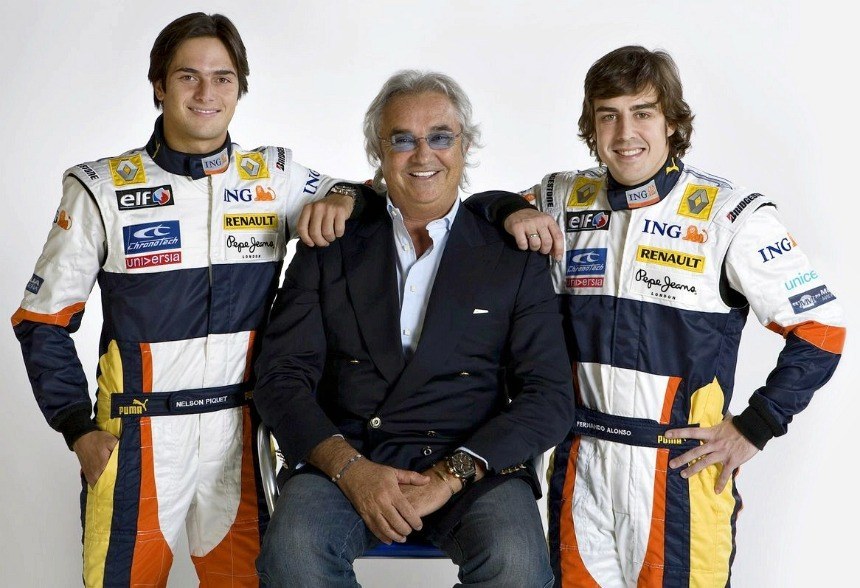 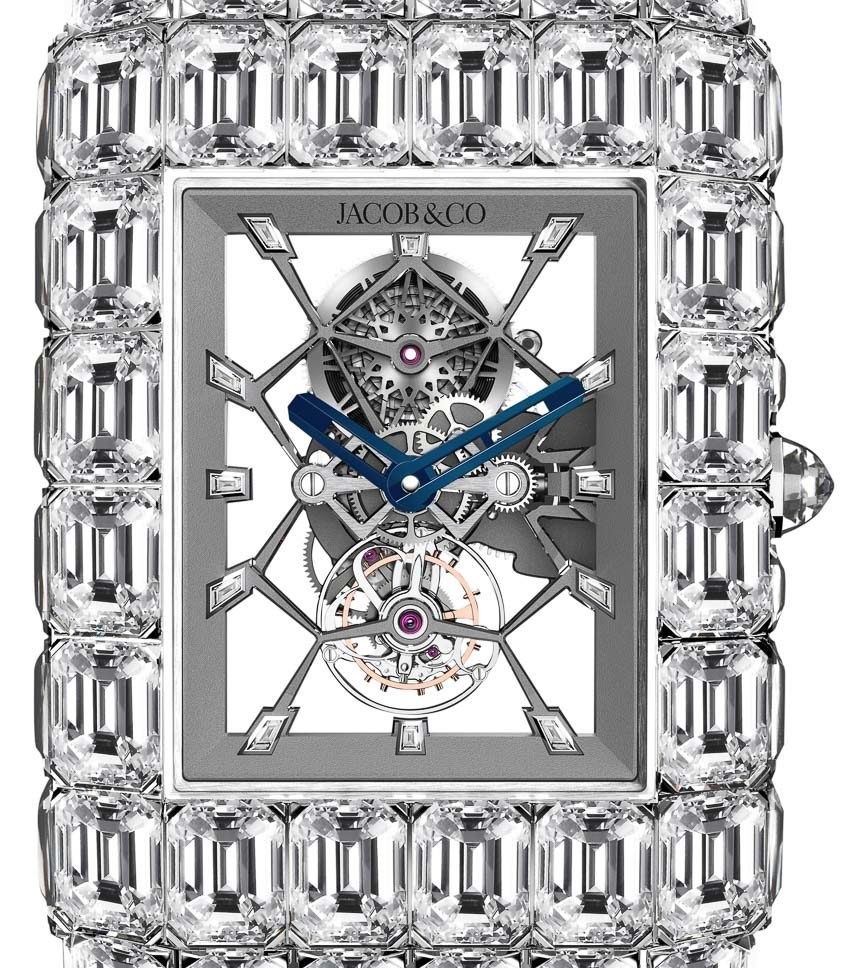 Inside the Jacob & Co. Billionaire watch is the caliber JCAM09 manually-wound tourbillon movement with fully skeletonized bridges. Time is displayed via the blued hand with diamond hour markers (of course). Under 12 o’clock is a skeletonized mainspring barrel (72 hours of power reserve) and the 3Hz tourbillon sits over 6 o’clock. The entire movement is made up of 167 parts. I think it goes without saying that a timepiece like the Jacob & Co. Billionaire Watch needed to have a tourbillon – it just wouldn’t be the same with out it.

If you want to be a little bit like Mr. Briatore and have the funds, Mr. Arabo will no doubt find a way of producing your perfect item of timepiece opulence. The Jacob & Co. Billionaire Watch is a bit insane, but that’s Flavio’s dream, and he can rest assured that no one else will be walking around with one of these. It sounds silly and like the last problem anyone will ever actually worry about having, but people with this type of wealth really do care about the fact that they have stuff no one else has – and for Mr. Briatore and a lot of other Jacob & Co. clients, that means a bracelet full of large diamonds that happens to tell the time if you look closely enough. Price for the Jacob & Co. Billionaire Watch is 18,000,000 Swiss Francs (currently about $17,848,500 USD). jacobandco.com