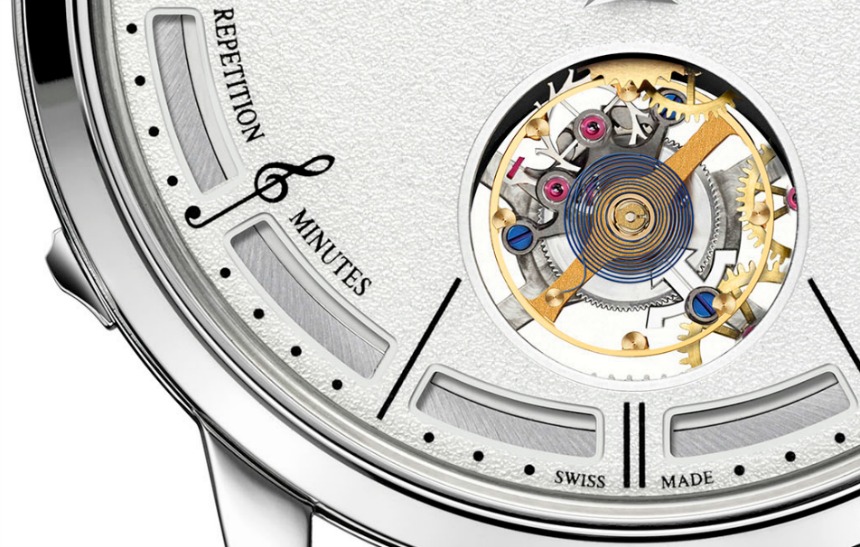 For the Master Ultra-Thin Minute Repeater Flying Tourbillon, Jaeger-LeCoultre developed the new Calibre 362 automatic movement. In addition to the watch case, the movement is very thin being just 4.8mm thick. It is produced from 471 parts and operates at a frequency of 21,600 bph. The power reserve (without using the minute repeater I imagine) is 45 hours long. It is also rare for being a grand complication movement that has automatic winding. All in addition to indicating the time, containing a tourbillon, and offering a minute repeater complication.

Ultra-thin watches tend not to have automatic winding because the rotor is a principle means of adding thickness to a movement. There are, however, ways to engineer a thin automatic-winding movement. The traditional approach is to create a micro-rotor which rather than sitting over the movement, sits within it. That is the precise technique used by Piaget in the Altiplano 43 Automatic, which is the thinnest automatic timepiece in the world. Jaeger-LeCoultre chose a far less common route with the Master Ultra Thin Minute Repeater Flying Tourbillon by using a peripheral rotor. 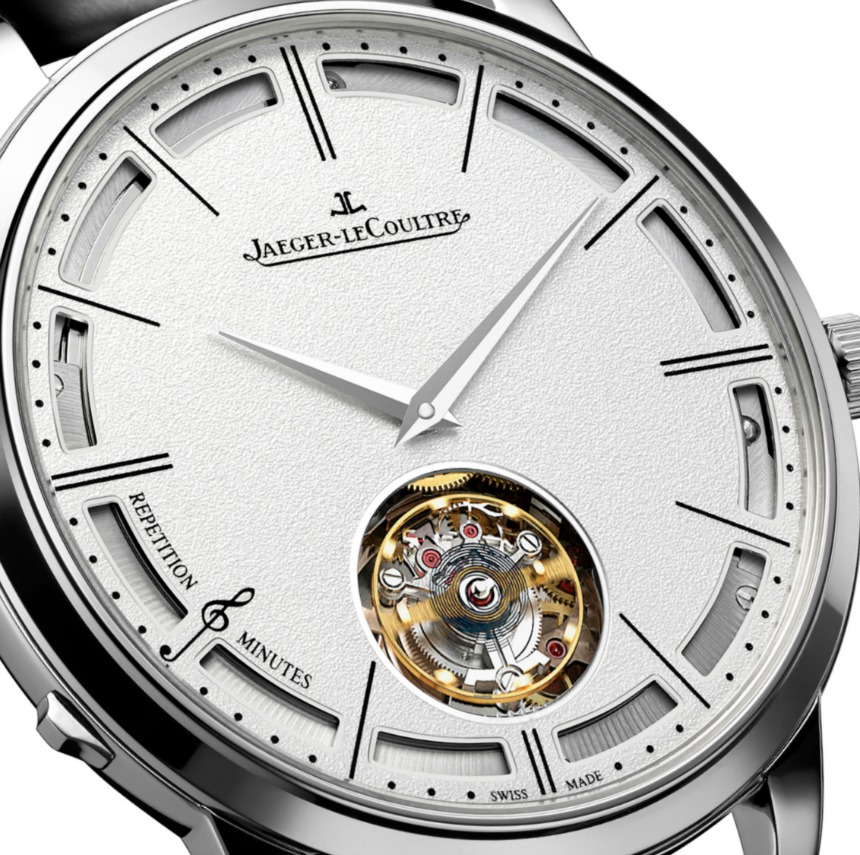 Peripheral automatic rotors are very rare, and perhaps the most common of which is that in the A1000 movement introduced in 2008 by Carl F. Bucherer. Peripheral automatic rotors sit on the outside of a movement versus on top or inside of it. This allows watchmakers to distribute volume horizontally versus vertically. This means watches with peripheral rotors tend to be thinner, but also wider. Given today’s tastes for thin, wide watches, that is hardly an issue so it works really well in this watch.

On top of the Master Ultra-Thin Minute Repeater Flying Tourbillon containing a peripheral automatic rotor, it has one that is visible through the dial. Rather than being on the back of the movement, the rotor is on the dial side, and can be seen through cut slits on the outside of the dial. As the watch moves on your wrist, you can see the rotor moving around through these openings. No doubt for some people this is going to be a stylistically controversial element as it disrupts an otherwise clean dial, but Jaeger-LeCoultre did it in a way that preserves the conservative nature of the Master collection design, while also giving mechanical movement enthusiasts – who are no doubt going to be those investing in this watch – more visual splendor to look at. It does however make the hands look a touch small, given that they don’t extend all the way to the edges of the dial over the dial openings.

After all that we’ve discussed, it is easy to forget that the watch also contains a minute repeater. Jaeger-LeCoultre tends to take their minute repeaters seriously, even though they don’t make a large number of them each year. According to the brand, they have produced over 200 movement styles (calibers) in their lifetime that incorporate the complication. Minute repeaters are exotic and very difficult-to-produce complications that “repeat” the current time to the users on demand via a series of chimes by activating the complication. An assembly of small gongs and hammers work together to create the melody, that counts out the hours, quarters, and extra minutes to allow you to “hear the time” by counting the notes properly. It is an ancient complication, and one that collectors still highly seek out today.

In addition to being contained in an ultra-thin watch, the minute repeater in the Master Ultra-Thin Minute Repeater Flying Tourbillon is noteworthy for at least two reasons. The first is something you can’t see, but can only hear. The system in the Hybris Mechanica Eleven is totally different than most competitor minute repeaters, and is designed to offer excellent sound in addition to being small in size. It is also designed to fluidly produce each note without disruption for a “harmonious restitution of the music of time.”

The watch incorporates technologies Jaeger-LeCoultre developed for previous Hybris Mechanica models including their “crystal gong” which is actually incorporated directly into the sapphire crystal on the caseback of the watch as well as their trebuchet hammers. These elements are intended to increase sound resonance, which should in turn improve not only the sound, but also the volume of the minute repeater’s chimes. 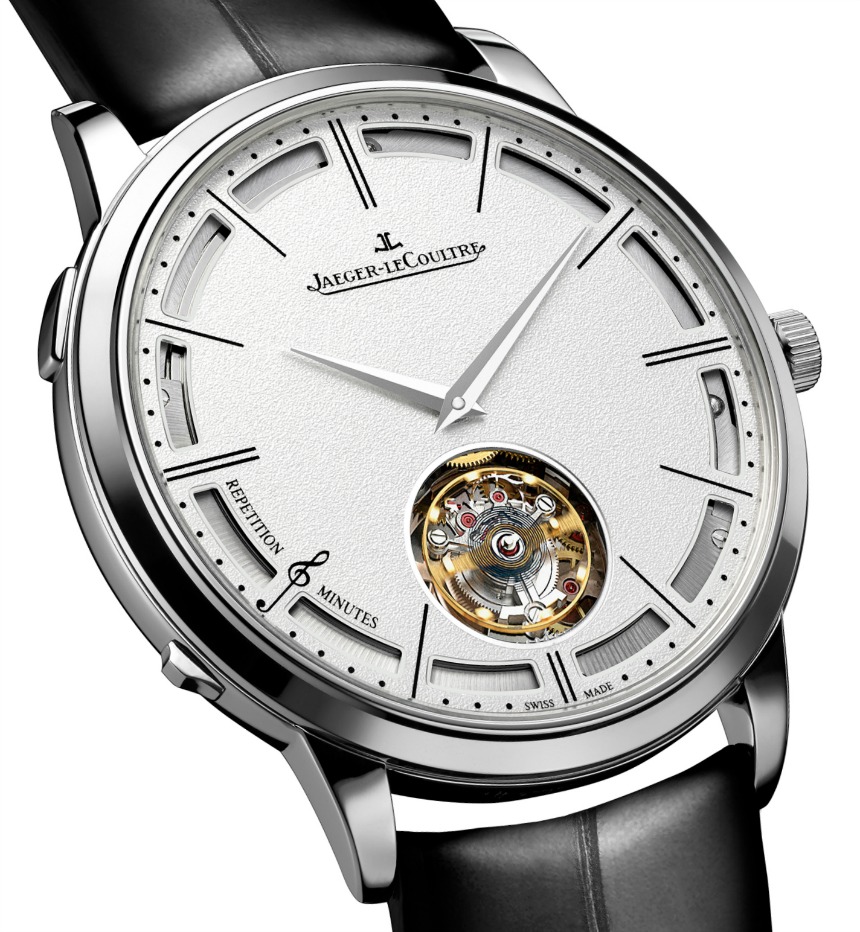 The Hybris Mechanical Eleven is a traditional-in-appearance dress watch that houses a lot to admire for hardcore watch lovers. Is it the ultimate dress watch for the horology enthusiast or perhaps the new king of serious mechanical tech in a stealth package? You can come up with your own description of the watch as there are multiple angles in which one can appreciate it. What we can say is that with automatic winding and a thin case, this is among the most daily wearable grand complication watches we know of, and it comes at no surprise that it bears the Jaeger-LeCoultre name. The Hybris Mechanical Eleven Master Ultra Thin Minute Repeater Flying Tourbillon will be limited to just 75 pieces for 2014, and we will return with a full hands-on look and the price after SIHH 2014 soon. Price is about $400,000. jaeger-lecoultre.com