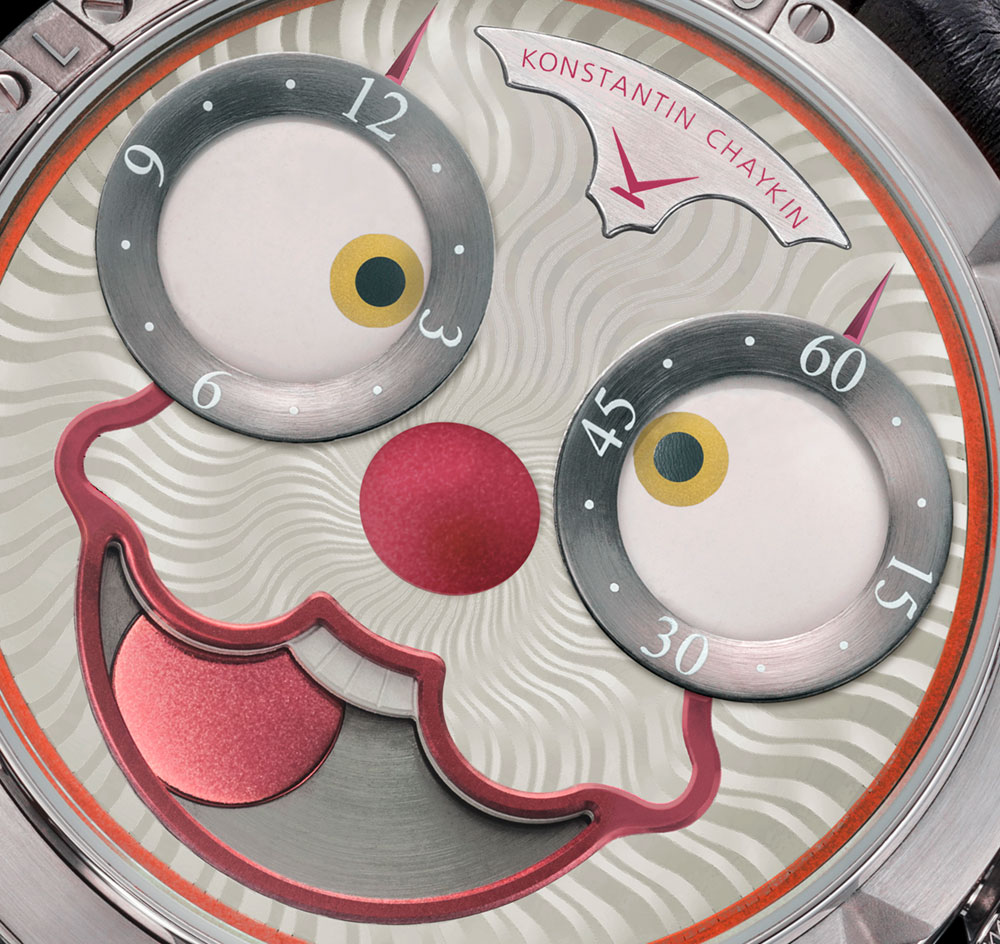 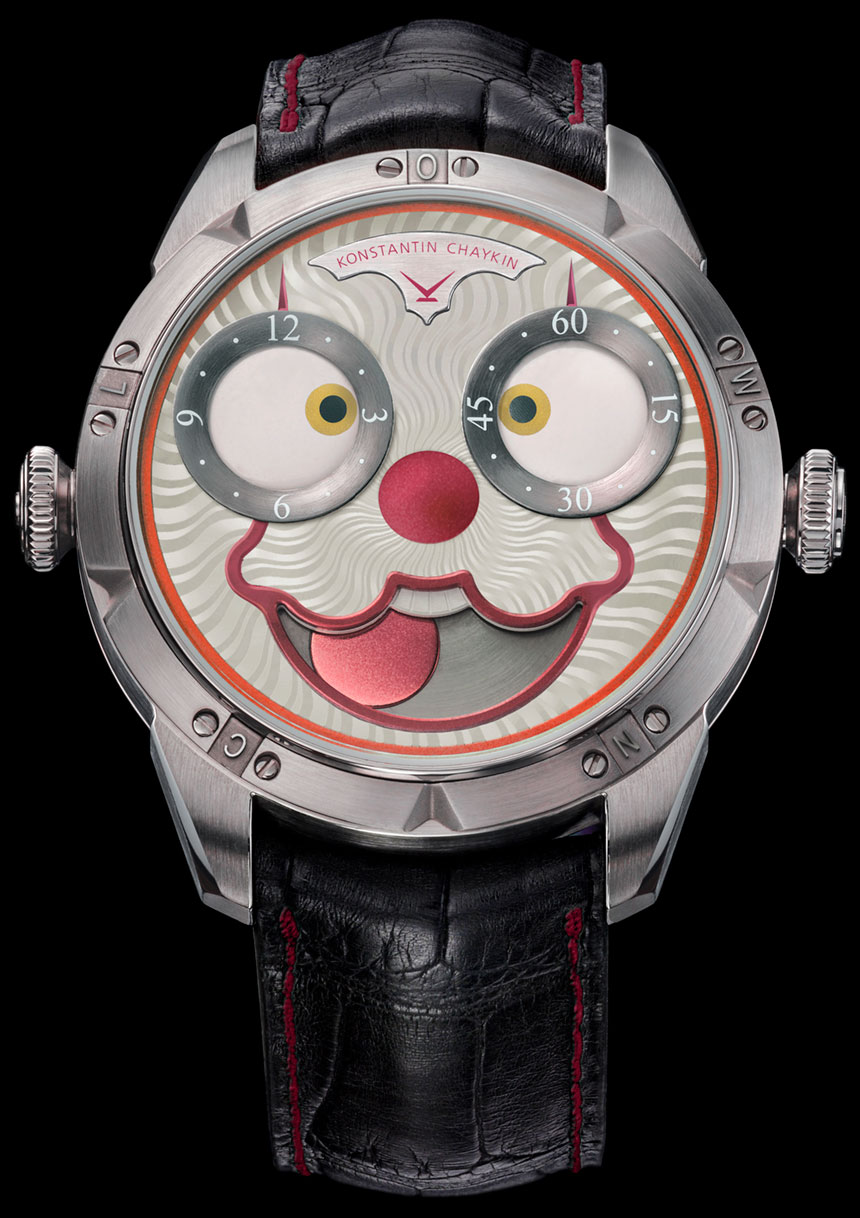 Russian independent watchmaker Konstantin Chaykin was noted earlier this year for infusing some whimsy into his watch design with the Konstantin Chaykin Joker watch, that seemed loosely inspired by the Joker character of the fictional Batman universe. It is a watch executed with commendable seriousness despite its prominent smiley face, and we even included it in our Top 10 Watches of Baselworld 2017. It turns out that the watchmaker is an ardent fan of author Stephen King, so while the Joker watch was not necessarily intended as a direct reference, the recent release and positive reception to the horror movie It about a demonic clown, inspired by the author’s novel, presented a happy opportunity for the watchmaker. Decidedly creepier than the Joker watch is the new Konstantin Chaykin Clown watch. 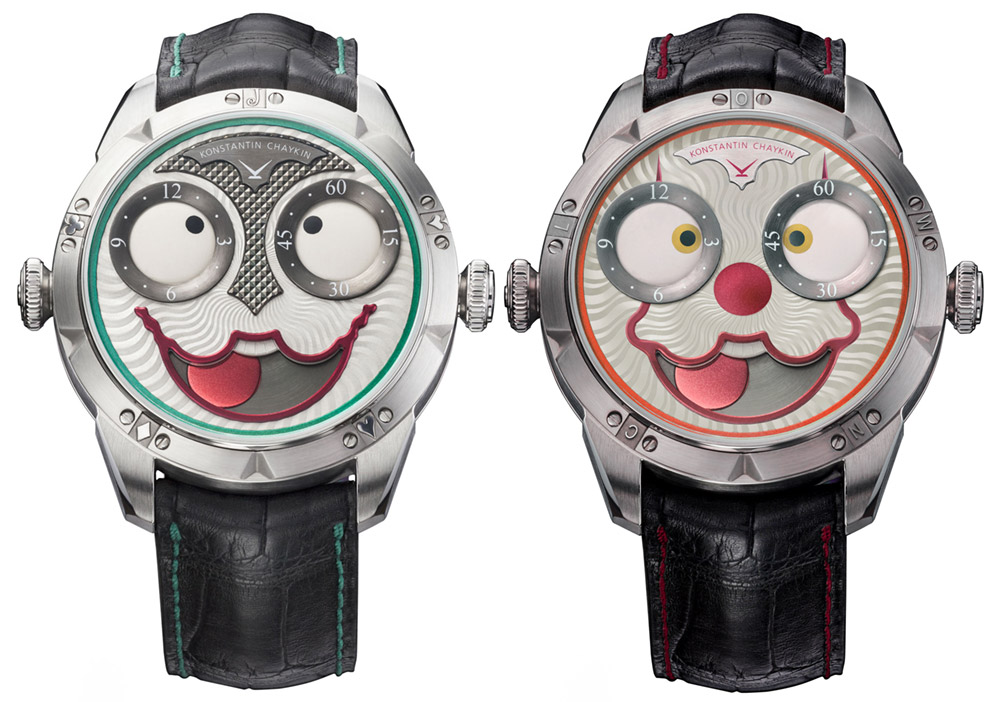 The Konstantin Chaykin Clown watch (right) is decidedly creepier than the Joker watch.

The Konstantin Chaykin Clown is a limited edition timepiece that is functionally identical to its Joker sibling but with a new dial design – this time inspired by the “Pennywise the Dancing Clown” character. The calibre K07-0 is a base ETA 2824 subjected to heavy modifications. The minute and hour indicators occupy their own sub-dials and Konstantin has added a moonphase indicator – there is no running seconds indication on the watch. Given the additional mechanics and complication, the movement’s power reserve drops from 42 to 38 hours, but it still beats at 4Hz. Since it is an automatic, the drop in power reserve should make no material difference in practice if worn regularly – not sure if it’s intended as an everyday wear. Read more about it in our initial article on the Konstantin Chaykin Joker watch here.

The stainless steel case remains identical in size to the Joker at 42mm by 13.7mm – a size that I think is the sweet spot given the design and all the dial elements. While the bezel of the Joker had the various playing card suits engraved onto it, the Clown replaces these with the word “CLOWN” with each letter at equally spaced intervals. It retains the dual-crown setup or the “ears” of the clown. The crown on the left is actually a pusher that can be used to adjust the moonphase indicator.

The color scheme for the dial is red and white, of course, and the Clown’s “lips” have a more elaborate design than with the Joker. The rings for the hour and minute sub-dials remain the same but the “eyes” now have a yellow iris surrounding the black pupils. Finally there are small, sharp red peaks at the top of the eyes mimicking the fictional clown-creature’s face paint. These small changes give the watch an edgier look, if you will, and with the various permutations of expressions possible between the two “eyes” and the “tongue,” even the more silly-looking expressions might take on a menacing character if you have seen the film or read the book.

As Ariel mentioned in his article on the Konstantin Chaykin Joker watch, an idea such as this is easy to take too far and make it ugly or cheesy. Konstantin Chaykin, I’m happy to say, has remained on the right side of that line with the Clown watch. It is neither ugly nor cheesy – but is unique with a healthy dose of whimsy. The use of traditional watchmaking techniques like applied elements and engraving also lends the watch a more “serious” look. 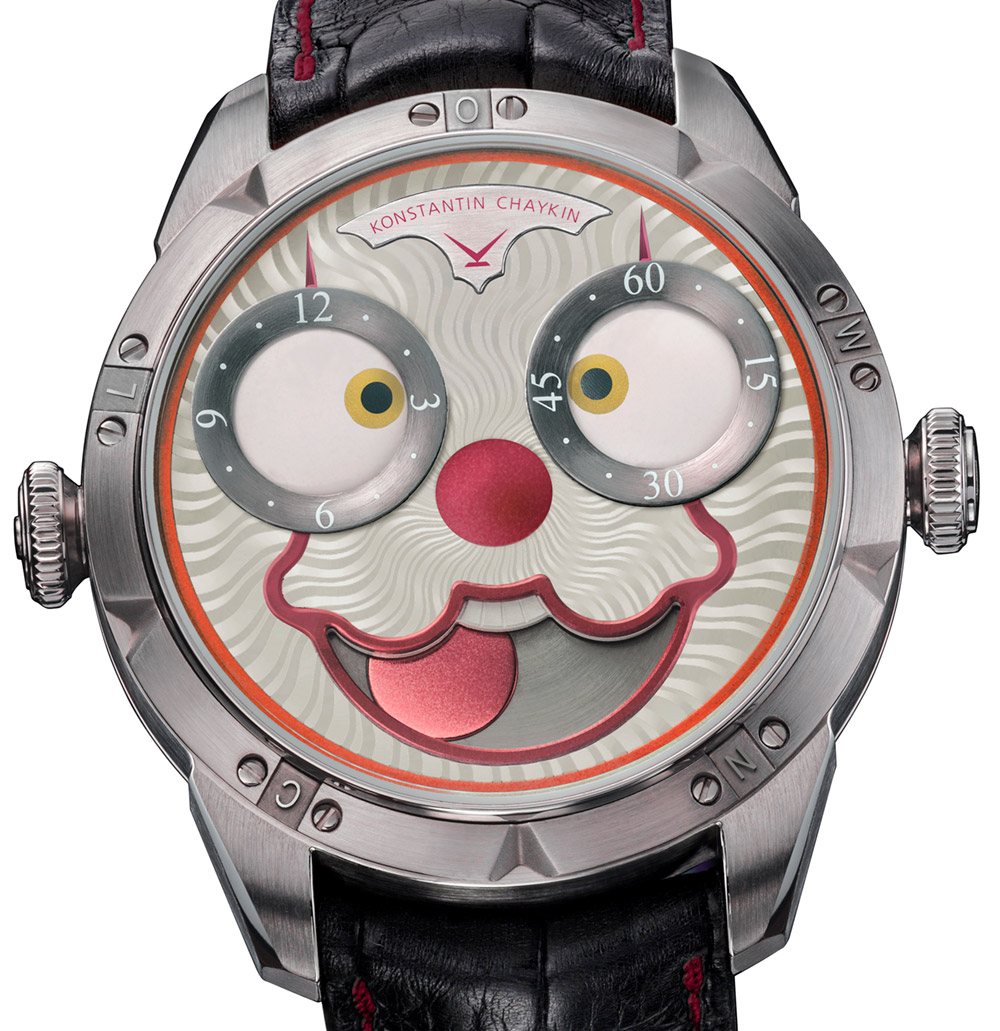