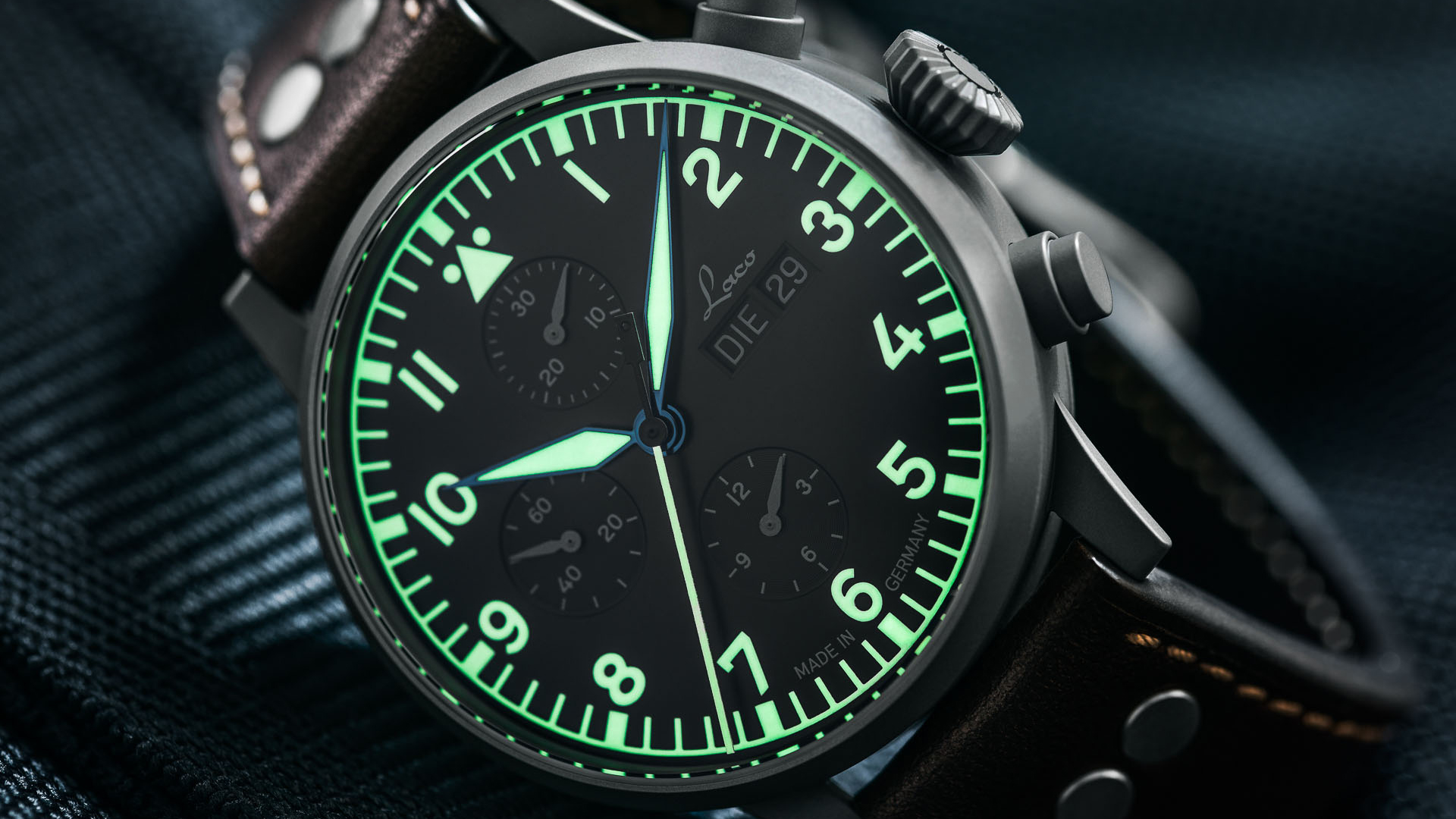 Over 80 years after its inception, the classic German Type A flieger pilot watch design still stands as the archetype for pilot watches everywhere. While all five brands (A. Lange & Söhne, IWC, Wempe, Stowa, and Laco) that originally produced the flieger design for the German Luftwaffe during World War II are active today in one form or another, Laco stands apart from the rest by producing some of the most accurate and affordable interpretations of the original wartime concept. For its latest release, Laco looks to combine the lines of the original wartime Type A flieger with the functionality of a military observer’s chronograph. The resulting limited edition Laco München Chrono stands as a simple, understated blend of design cues that feels distinctly layered in its execution.

While many modern takes on the basic flieger design streamline the case geometry for both comfort and aesthetic reasons, the stainless steel case of the Laco München Chrono aims to emulate the original ‘40s shape. While downsized significantly to a modern and wearable 42.3mm diameter, the wide set, narrow lugs jut out directly from the mid case with zero curvature or downward angle. This can often cause these original pilot styles to “float” on the wrist, as the combination of the straight lugs and the elemental cylindrical case architecture does nothing to conform to the curvature of the wearer’s wrist. In initial images, however, it’s more or less impossible to confirm if this particular case will exhibit that issue. What the initial images do show is the quality of the dark sandblasted case finish, a matte utilitarian look pulled directly from the original World War II era fliegers. Other than the size, the most notable change from the classic Type A case design is of course the inclusion of wide inverted pushers for the chronograph. The oversized conical crown at 3 o’clock, on the other hand, is faithful to the original shape. The caseback features a special limited edition serial number engraving, and helps this watch to a respectable 100 meters of water resistance. 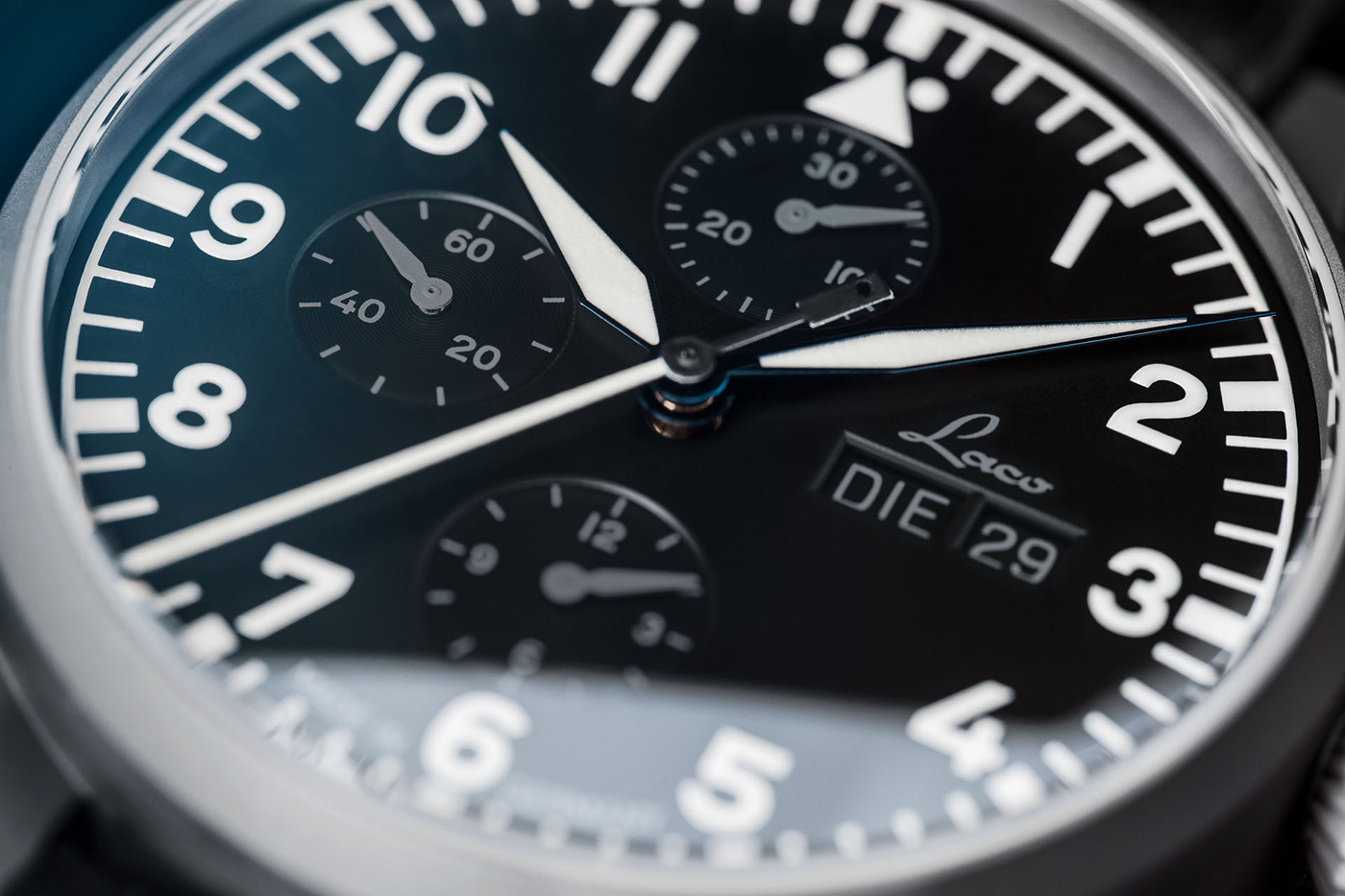 Laco’s approach to the dial of the limited edition München Chrono looks to maintain as much of the original look of a three hand Type A dial as possible while incorporating additional complications. This leads to a distinctly layered look, as if two separate dials had been laid one on top of the other. The more prominent “top layer” is undoubtedly the outer minutes track, printed Arabic numerals, blued hour and minutes hands, and the central chronograph seconds hand. All of these elements follow the classic hyper legible flieger formula and are heavily lumed in bright white Super-LumiNova C3. The second level of the dial is printed in a ghostly medium gray on black, including the three chronograph subdials and the day/date combination at 3 o’clock. While the hands and typeface of these elements are clean and simple, this low contrast colorway may make them difficult to read at a glance. Conversely, this subdued look allows these elements to fade into the background during normal viewing. This is likely to be the most divisibe point of the München Chrono’s design, but the ghostly effect is certainly a unique solution to cutting down the visual clutter of a chronograph dial. 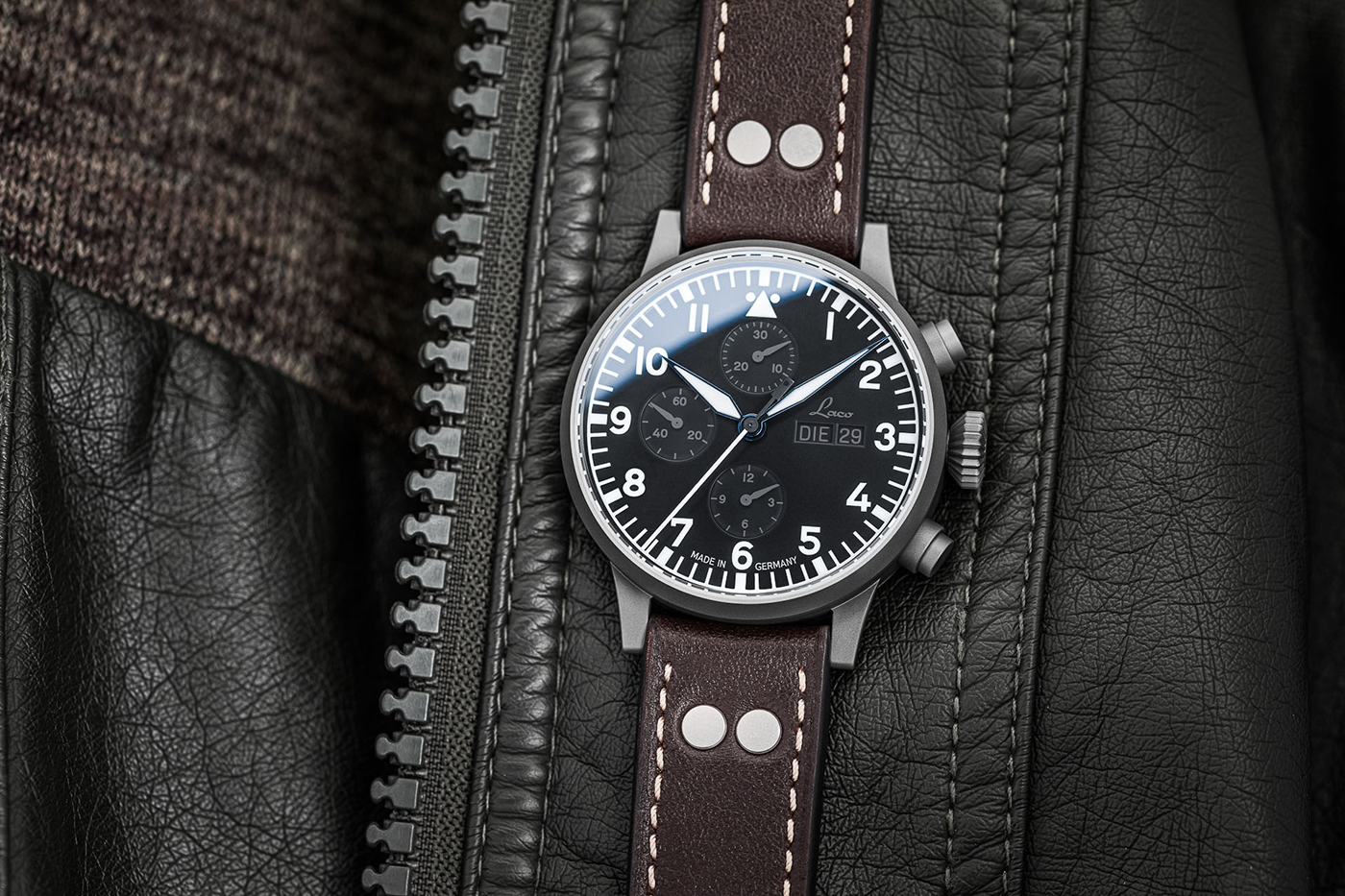 Laco powers the München Chrono with the Laco 50 automatic chronograph movement, based on the workhorse ETA/Valjoux 7750. Performance is more or less standard for a 7750 based movement, with a 48 hour power reserve and a 28,800 bph beat rate. Strap choice for the München Chrono is suitably classical as well, with a cocoa brown rivet leather strap featuring white contrast stitching. 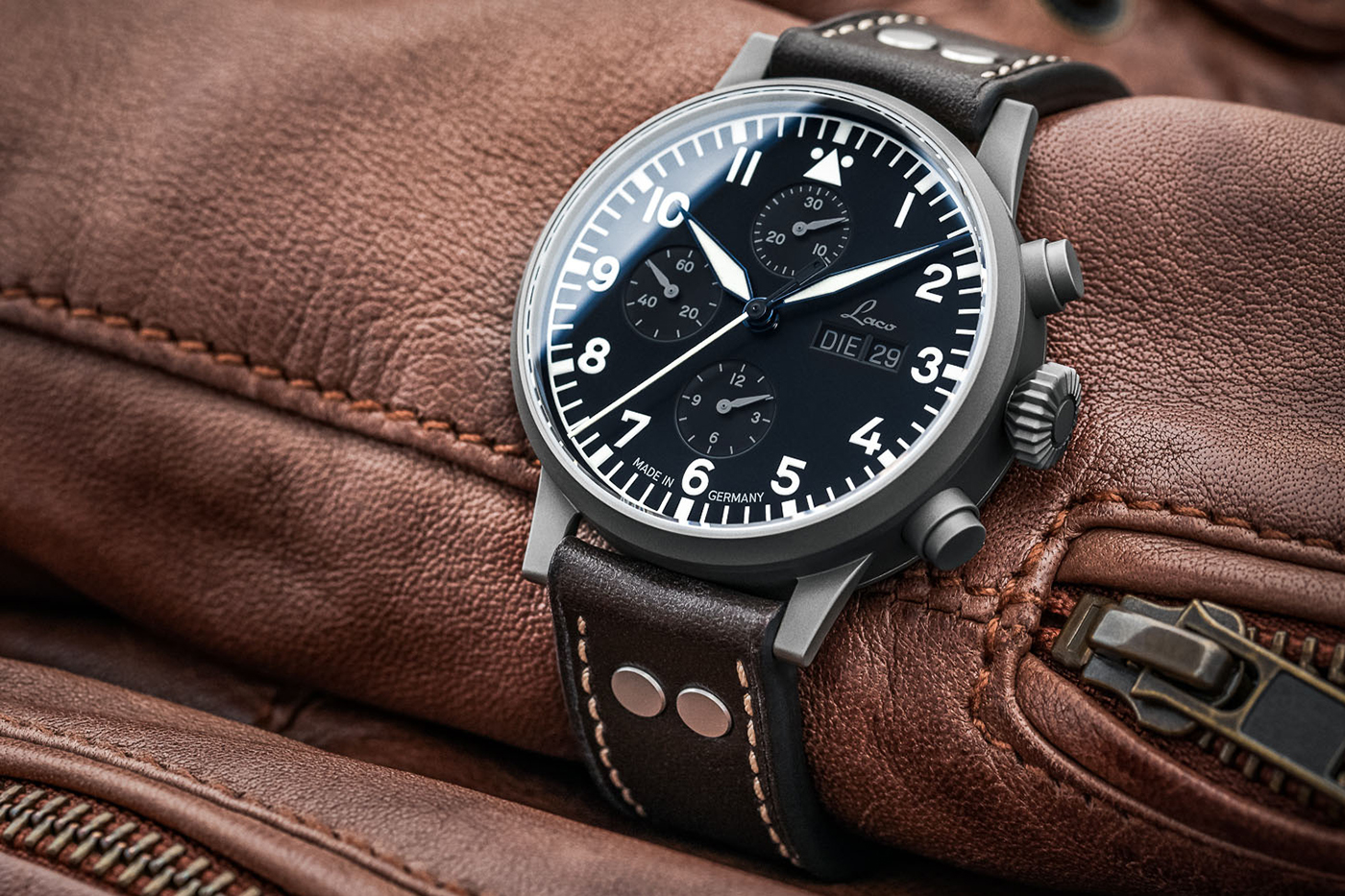 With the limited edition München Chrono, Laco combines the best of both worlds from three hand pilot and chronograph designs, with an unorthodox and memorable execution. The Laco München Chrono is limited to only 200 units, and is available now for preorder through authorized dealers at an MSRP of $2,400. Delivery is expected in November 2020. For more details, please visit Laco’s website.