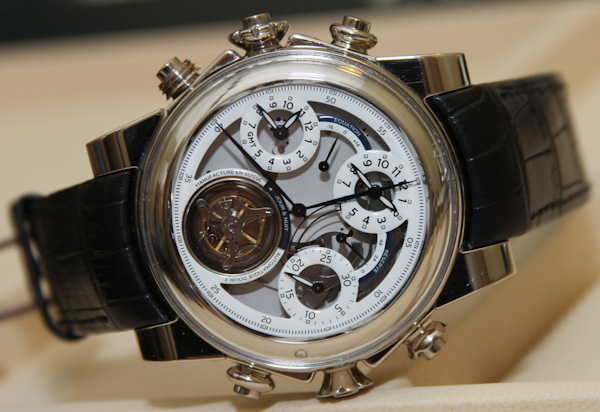 The coolest part of this ultra-complex watch called the 1f4 is really tough to notice unless you are looking for it. Even though this timepiece is double-sided (quite literally and I will get to that), it is an automatic. The spinning rotor of the watch is placed in the bezel, actually both bezels. You see, the bezels are actually made out of sapphire crystal. Under them is a spinning piece of 18k gold (available in various gold colors) that is the rotor. The only problem is that the transition between the sapphire and the rotor is so smooth you can’t even tell they are different. So to inform you that something is actually spinning, each rotor has a single inset diamond that spins around. This little feature is the beginning of one of the most technically sophisticated timepieces on the planet.

My hands-on experience is with an unfinished 1f4 prototype. While it is mostly completed the lighter dial side is not get done. It still has additional finishing to receive as well as at least one hand. In total this watch will have 18k gold 16 hands. So what it is thing? The watch is just called the Loiseau 1f4. Manufactured under the brand name Loiseau, by the man Loiseau. 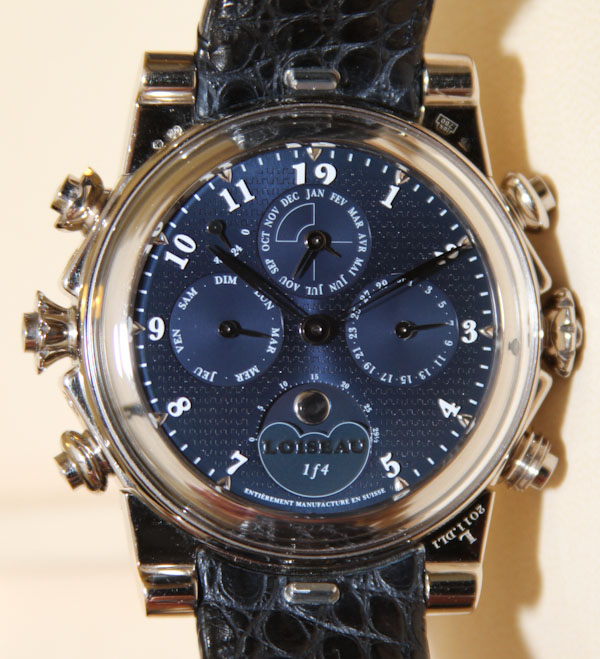 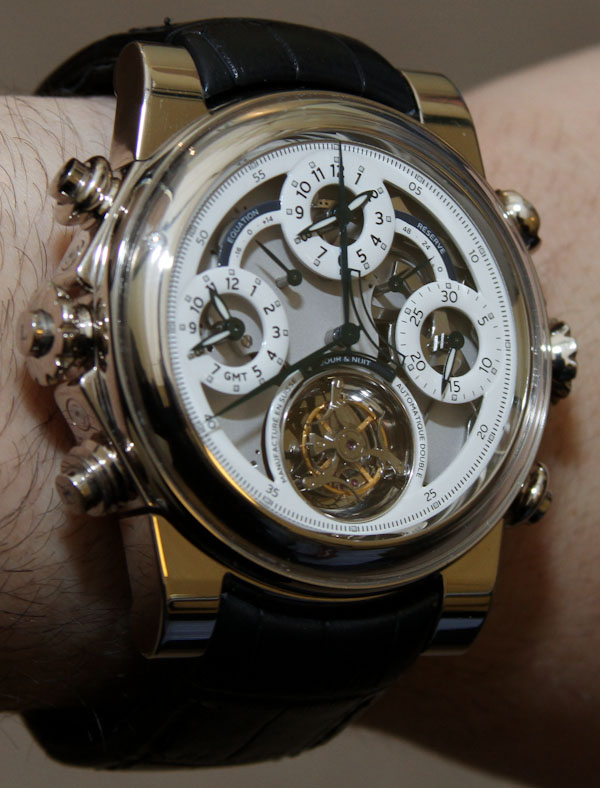 Dominique Loiseau is one of those superstar watch makers, but probably one that you’ve never heard of. In the 1980s and 1990s he spend years working for large brands such as Omega and Blancpain. If you recall those fascinating Omega Central Tourbillon watches I talked about – Loiseau was heavily responsible for those. As well as a very unique set of avant garde Omega tourbillon pocket watches called “Les Montres de Sables.” At Blancpain he designed the 1735 timepiece in the 1990s. It was for its time the most complex wrist watch in the world. Today less than 50 were ever made by Blancpain, and it represents an unique technical pinnacle for modern horology. Dominique’s specialty are ultra-complex watches, and he designs them with a very traditional sensibility.

For his own brand he really wanted to produce the most complicated watch in the world – that was his dream. I am so mixed up with which watch may or may not have more functions than others that I tend to stay away from the title of “most complex.” This has a lo to do with what people define as being a complication or not. Suffice it to say that the 1f4 is up there at or near the top of the list and is very high-end. The 1f4 watch for example boasts a hand-made movement with 891 individually finished parts, and a list of functions that is 32 items long (see below). Each watch will take a very long time to produce, and will be available in 18k white, yellow, or red gold, as well as in platinum. The case itself is double-sided and reversible. What you say? The system works like those reversible belts that have a buckle you can pivot around. The lugs are spring-loaded and pull out a bit and can then be spun around. This is to make it possible to wear the watch with either dial facing up. It is a simple little trick, and I’ve never seen it before applied to a watch. I am surprised some fashion watch brand never did that before. 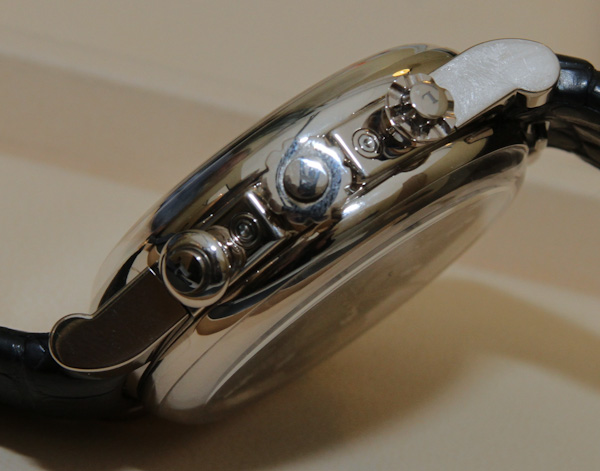 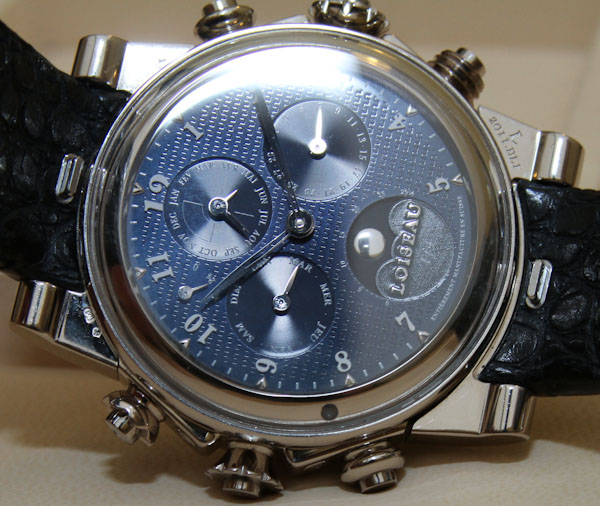 The case itself is 45.20mm wide and has two crowns, four pushers, and four inset correctors. As much as it does, the watch isn’t as terribly thick as you might guess. 16.64mm is a more than acceptable thickness for what the Loiseau 1f4 contains on the inside. The design of the case and dials are classic to say the least. You can see that this guy certainly came from a brand like Blancpain. Some people will love the look, others will find it dated and boring. The problem is that with all the technical prowess inside of the watch, people inherently want a modern or futuristic design. If Hublot for example made this watch it would look like a space ship from the movie Batteries Not Included.

One side of the dial is mostly white and has lots of levels. The other side looks very Blancpain and has a textured dial that is more flat. The only this each dial shares is that it tells the time. Features easy to notice are the flying tourbillon, and the complex perpetual calendar functions. So what else does the Loiseau watch do? Here is a function list from them: 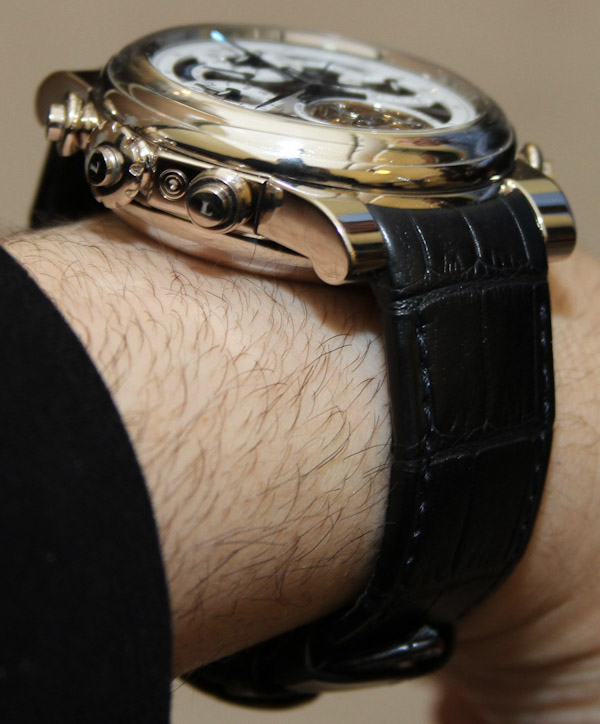 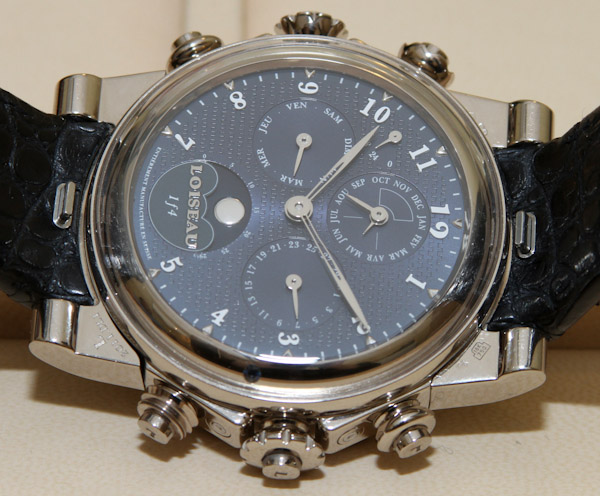 Holy crap that is a lot. Would you have ever guessed that the watch is also a grand sonnerie? Loiseau says that it can only produce two 1f4 watches per year. Price for it will be at least a million dollars (likely a lot more), and I was so surprised to just randomly see it as the brand does not really market themselves. Dominique is clearly an only school type. Not a business guy at heart, he is a prideful watch maker who is keen to assert himself in his craft. As far as I know, now during the last part of his life, is the first time he has done something like this on his own. His design sensibility might be a bit in the past, but a lot of people appreciate that. What is important is what he has been able to do technically. The 1f4 for example is chess-themed. You only get a hint of this when looking at the chess-board style clasp on the strap. This watch is in part an homage to the complexity of chess, and connecting the cause-and-effect decision making of the game with a watch movement. Truly a special watch, I thank Mr. Loiseau and his associates for showing it to me and look forward to seeing the final 1f4 piece.