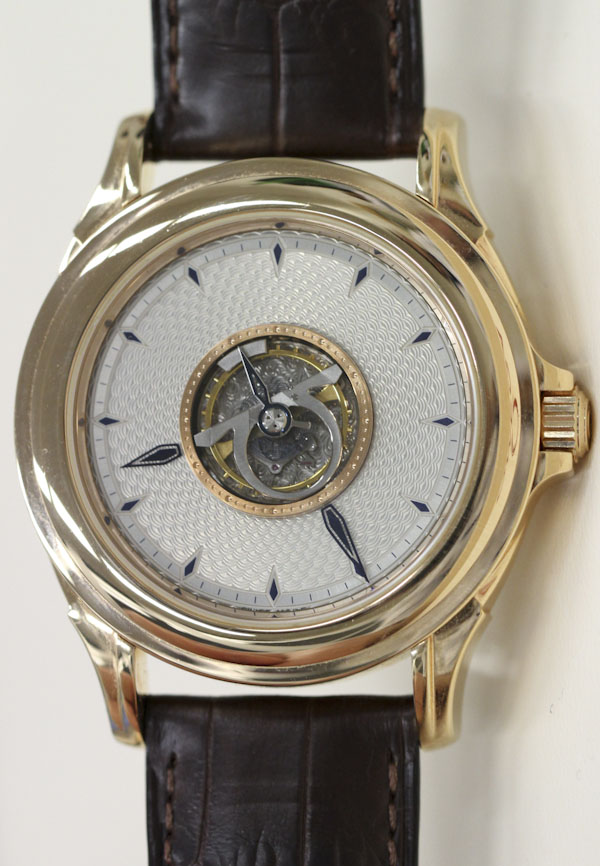 According to Omega they were the first wrist watch brand to place a tourbillon escapement based movement into a wrist watch. This was back in 1947. I am by no means going to discuss what a tourbillon is or its history in this article. Suffice it to say however that the ancient complication designed by Breguet back in his lifetime was originally meant to be in pocket watches.

It was not until the mid 20th century that tourbillons found themselves in wrist watches. For Omega, it was a limited production piece that only had 12 movements ever placed in cases and sold. The 1947 movement was designed as a competition movement for the Swiss Observatory Chronometry competition. It was thought that applying a tourbillon to a modern movement would help further increase its accuracy and give it that edge to win the famous competition where brands would submit movements to see which was the most accurate. 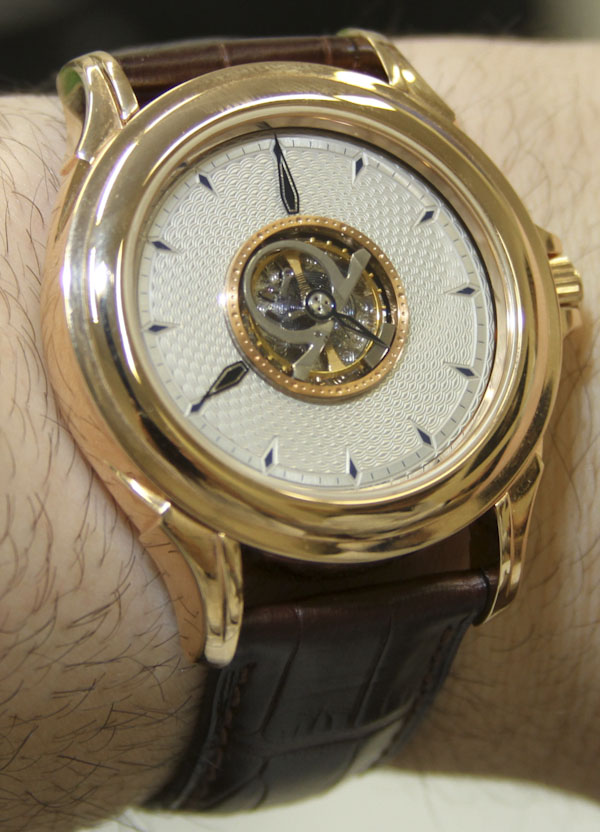 Omega won that year with its tourbillon based watch movement (which oddly enough had more in common with older pocket watch movements as opposed to more modern wrist watch movements). Like I said, a few (12) were actually put in cases and sold to customers. One of those pieces is shown here in this article. A simple looking watch, it just says “Omega Tourbillon” on the dial and rest should be up to the wearer to understand. The movement itself is nothing fancy in appearance. It is a very industrial looking movement – super accurate and with a tourbillon. It was called the Omega caliber 30I and the tourbillon made one revolution each seven and a half minutes. Seeing (and wearing) it in person was a thrill.

Later in wrist watch history tourbillon-based wrist watch movements became the popular thing for the wealthy elite. Not so much because of what they offered performance-wise, but more because of their visual appearance and complicated nature. Omega was actually at the cusp of the neo-tourbillon watch crazy that seemed to start in the early 2000s, but actually started a bit earlier. Omega’s first modern tourbillon movement was released for sale in 1994. I had no idea it was that early. 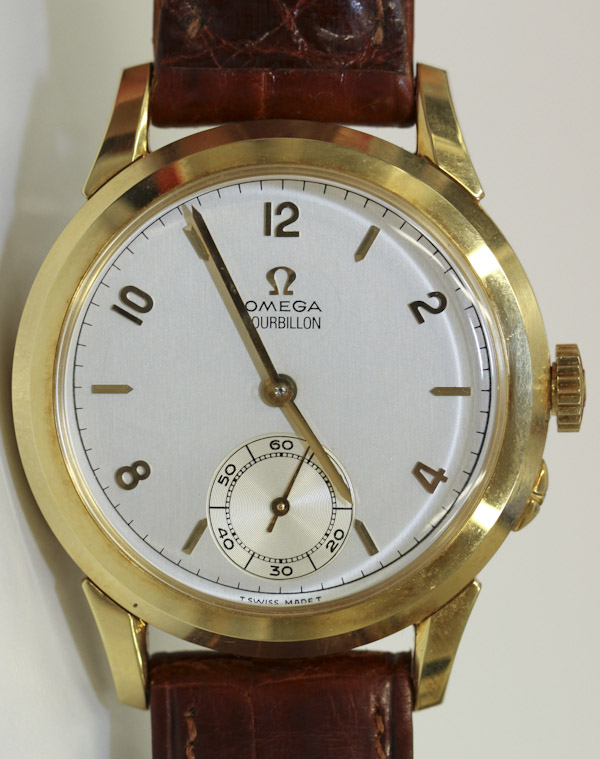 Since then Omega has steadily produced a handful of tourbillon watches each year. And by handful I mean it. If my recollection serves me right Omega’s tourbillon watch production is something like 10 watches per year. That is almost nothing compared to the brand’s larger production volume. So why do they do it? According to Omega they like to keep the tourbillon production workshop open to continue part of the brand’s history and offer something special. It is a passion department as sale of the tourbillon timepieces aren’t really a money maker for the brand. The watch makers who produce these timepieces have their own area at Omega and really just do their own thing in comparison to the other “volume production” areas of Omega.

The Omega tourbillon watch released in 1994 (the Omega calibre 1170) was interesting for at least two reasons. First, it is a central tourbillon. This means that the tourbillon carriage is placed in the center of the dial. Second, the Central Tourbillon is an automatic. If I had to add a third special quality it would be that the hour and minute hands are applied via metallization to sapphire crystal discs (think something similar to Quinting – though I think Omega’s practice predates them). So the seconds via the tourbillon were at the center, and the minute and hour hands were applied on spinning sandwiched sapphire crystals. 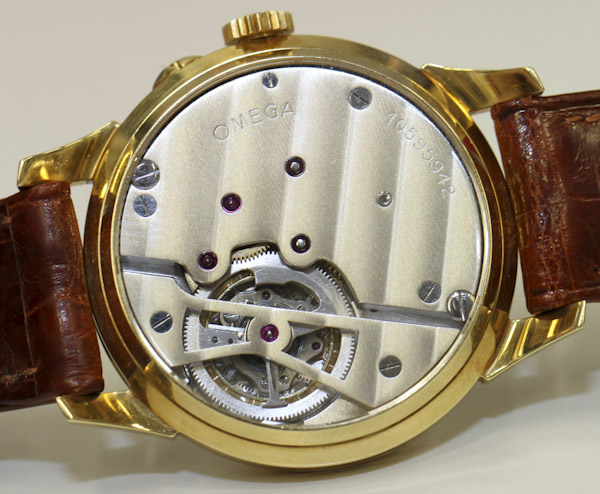 The Omega Central Tourbillon watches are all placed in DeVille cases (this far) and are in precious materials. From 1994 – 2010 Omega released about seven variations of the tourbillon movement. In 1997 the movement grew up a bit to become the Caliber 2600A. What really changed was the application of the automatic winding system that was now part of the movement itself. The watch designs were of course changed as well. 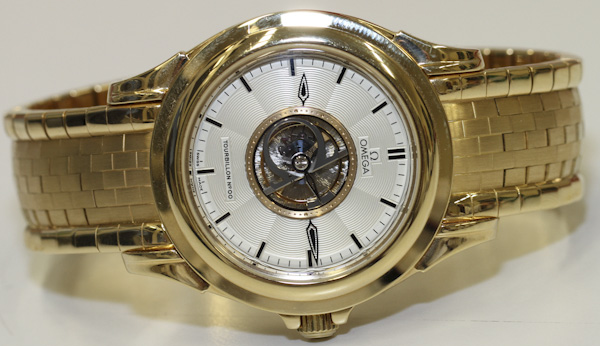 And there is our brief history of Omega’s Central Tourbillon watch. So what is this piece all about? Of course the main idea was to create a symmetrically pleasing dial that featured a tourbillon mechanism. Doing that made it impossible to have centrally mounted hands. This meant that the hands would have to be mounted elsewhere – hence whey the sapphire place system is used. The plates sit around the tourbillon and are driven by a small ring-like gear around the bezel of the watch. This also seems to cause a complication in how you adjust the time. Pretty much everything about this watch is uniquely quirky.

For one thing you actually turn the crown counter-clockwise versus clockwise to wind it (but don’t forget that it is an automatic). Nothing major, but still a quirk. To adjust the time there is another flat crown mounted on the caseback. You need to pull it out a bit then and use it to turn the two sapphire crystal discs that indicate the minutes and hours. Cool and weird at the same time in my opinion. 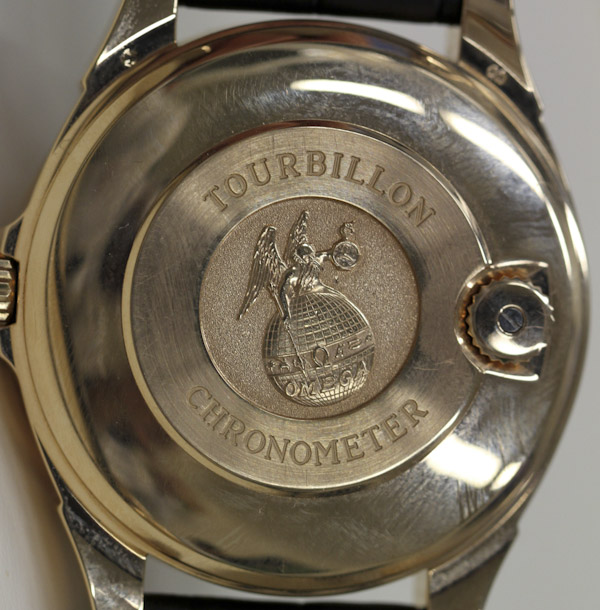 Omega likes to play with the decorative elements on the watch. An especially nice area for art is the plate underneath the tourbillon. This plate is routinely machine guilloche engraved to offer a beautiful look that you need to seek out under the tourbillon while it is spinning. Speaking of which, machine guilloche engraving is what makes up most of my favorite Omega Central Tourbillon watch. A very discreet model with no brand name on the dial. All there is to remind you it is an Omega is the brand logo placed in as part of the tourbillon carriage.

The model I am referring to is pictured in this article, but I am not sure which specific model number it is. The watch has an 18k rose gold case and totally hand-machine guilloche engraved dial done in a very traditional manner. The Central Tourbilon is very visible as are the blue hour markers and hands. In this case the contrast between the blue markers on the sapphire crystals and the dial is very high. This makes reading these solid dial models a pleasure. 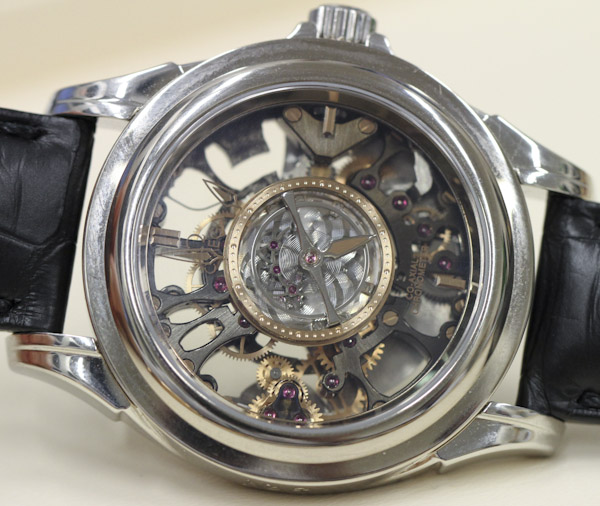 My main complaint on the skeletonized pieces is that the hour and minute hands are often very difficult to spot – making legibility less than optimal. Omega actually tried to remedy this as much as possible by using a complex metallization technique that applies a rounded metal markers on the sapphire crystal (as opposed to flatter ones), but it does not help enough. This is most an issue because on the skeletonized pieces the mostly gold hands blend in with the dark gray and gold movements too much. I have a feeling I know what Omega is going to work out next in their Central Tourbillon watch collection.

Wearing these watches makes me feel very special. They are models that almost no one knows about from a brand that almost everyone knows about. I think of them as being “secret Omegas” for the educated brand lover. How much do they cost? I was told in the range of about $80,000 each. Look for more of these special Omega Central Tourbillon watches to come each few years and production to remain low and steady for only the most passionate brand collectors.