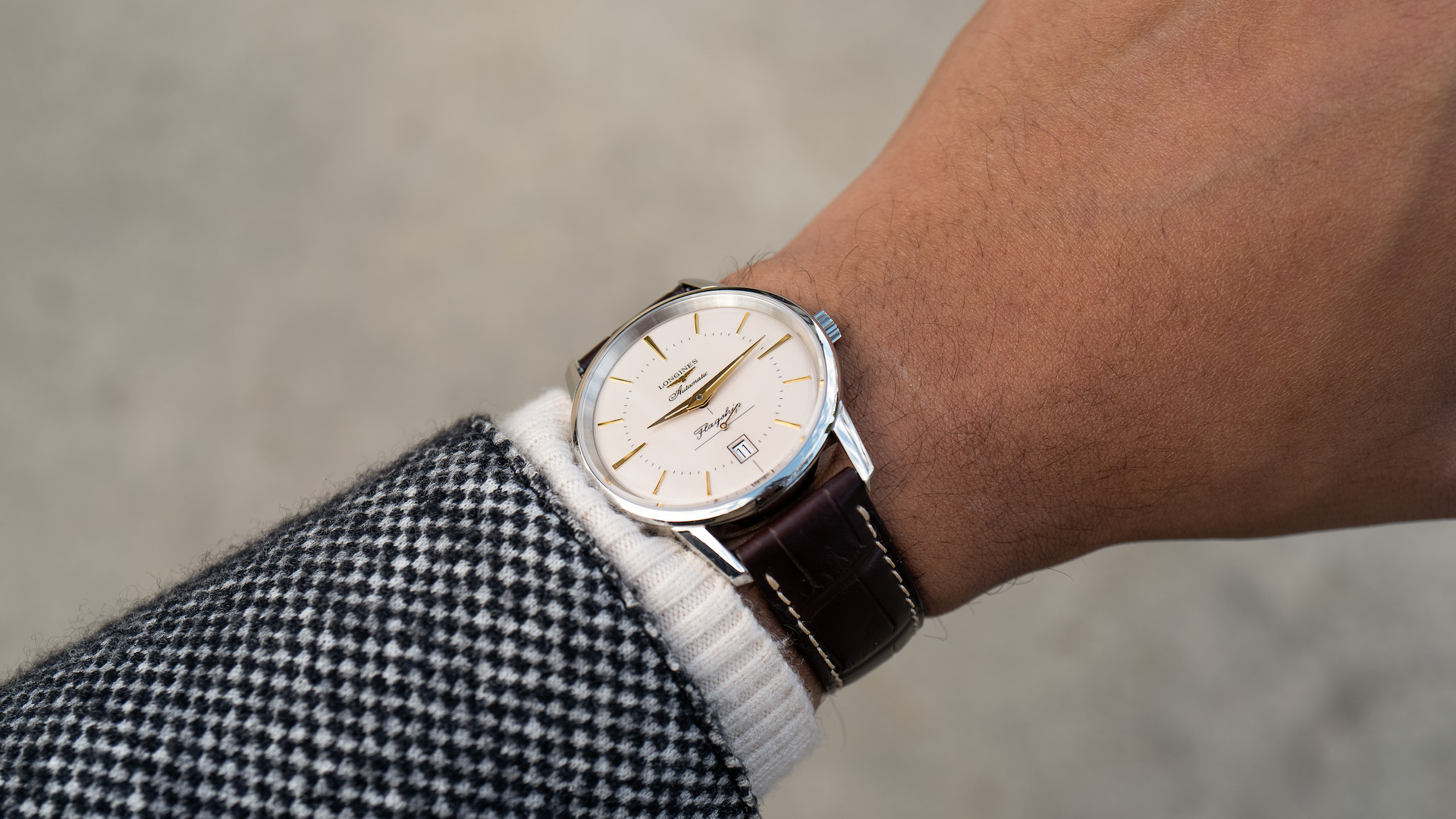 It’s sometimes easy to forget that Longines is one of five watch brands that sell north of $1 billion in watches at retail per year. When you consider the comparatively higher prices of the average watch sold by the other four (Swatch group sibling Omega, Patek Philippe, Rolex, and Cartier), the average ~$2,000 price of a Longines translates to a lot of watches sold. It’s not a stretch to infer that Longines knows how to sell accessibly priced luxury watches more than almost anybody else out there.

It’s been some years since the release of the Longines Flagship Heritage ref. L4.795.4.78.2, though I never got to spend more than a minute or two with it until recently. It embodies three factors that make the brand such a global presence: its design is inspired by the brand’s own history while being thoroughly modern in its construction; it’s finished impeccably; and finally, it’s price of $1,675 is a value-flex that likely wouldn’t be achieved without the Swatch Group’s extensive infrastructure and resources. 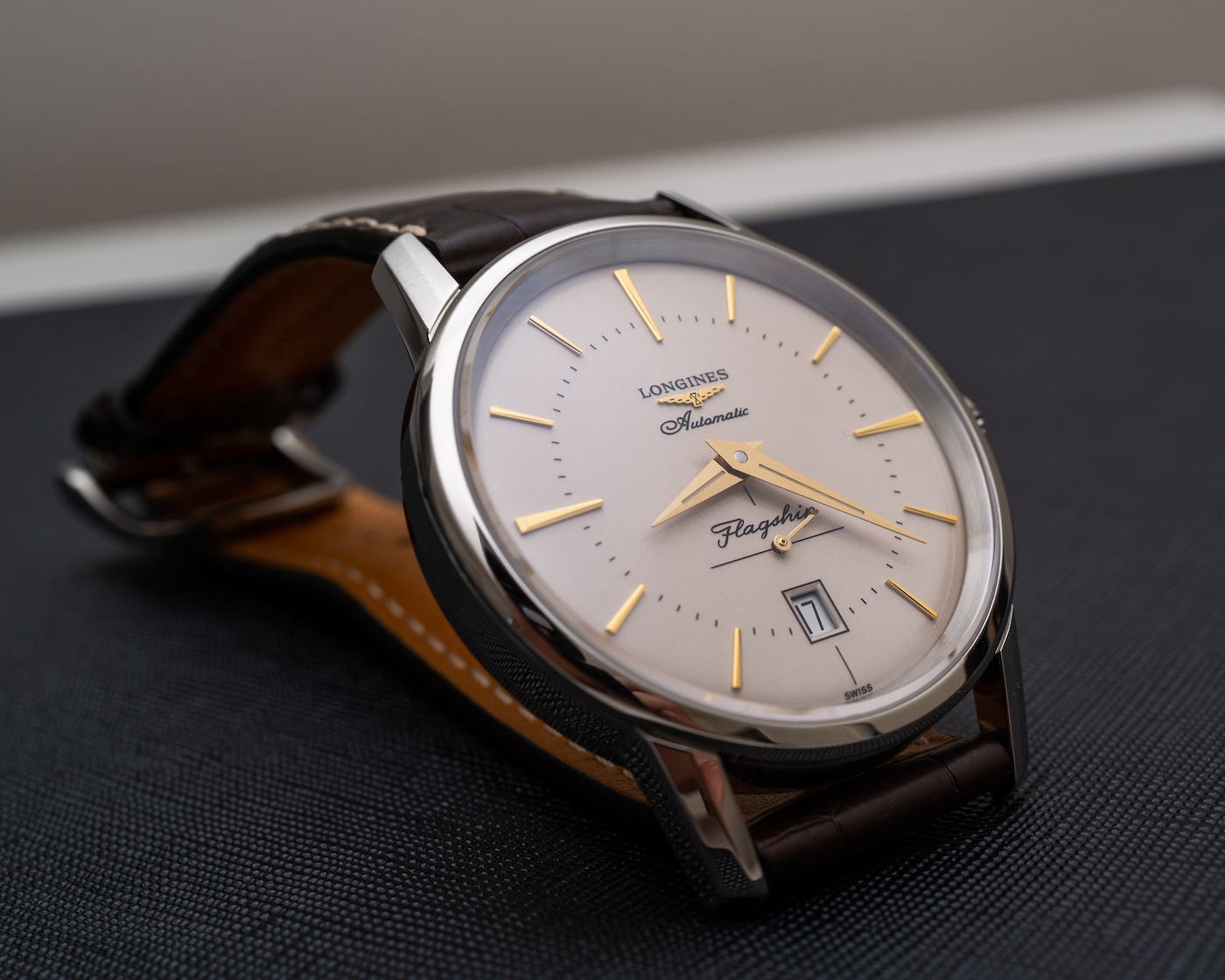 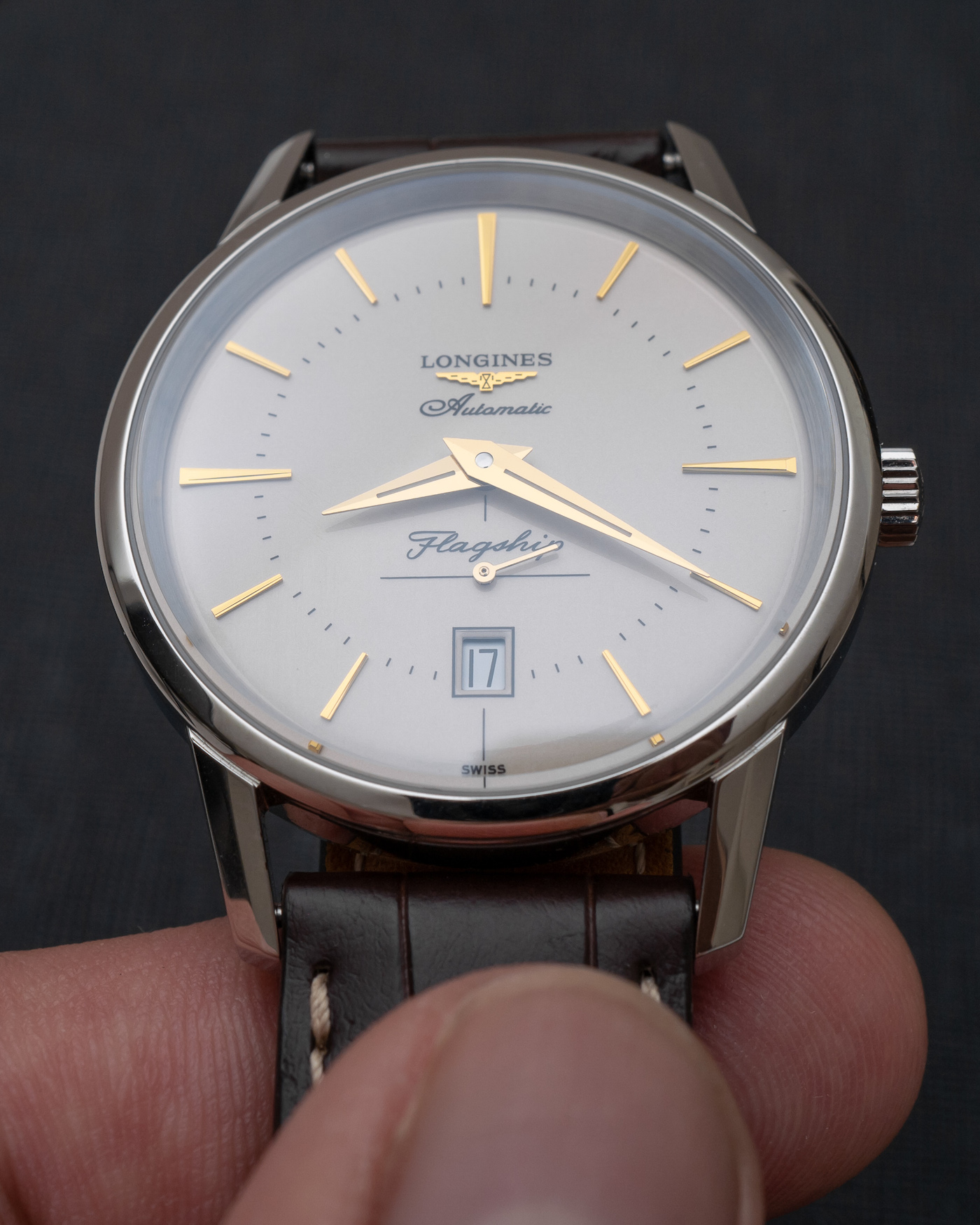 The brand has been under the leadership of Mr. Walter von Känel since 1988 when I was but one year old. He’s always understood that, at this price point, there is a huge global market with very diverse tastes. However, the common thread remains that Longines is a brand with distinct knowledge of its history and the power of the Swatch group behind it, allowing finishing quality (and access to ETA movements) that other brands simply can’t feasibly provide for the price. 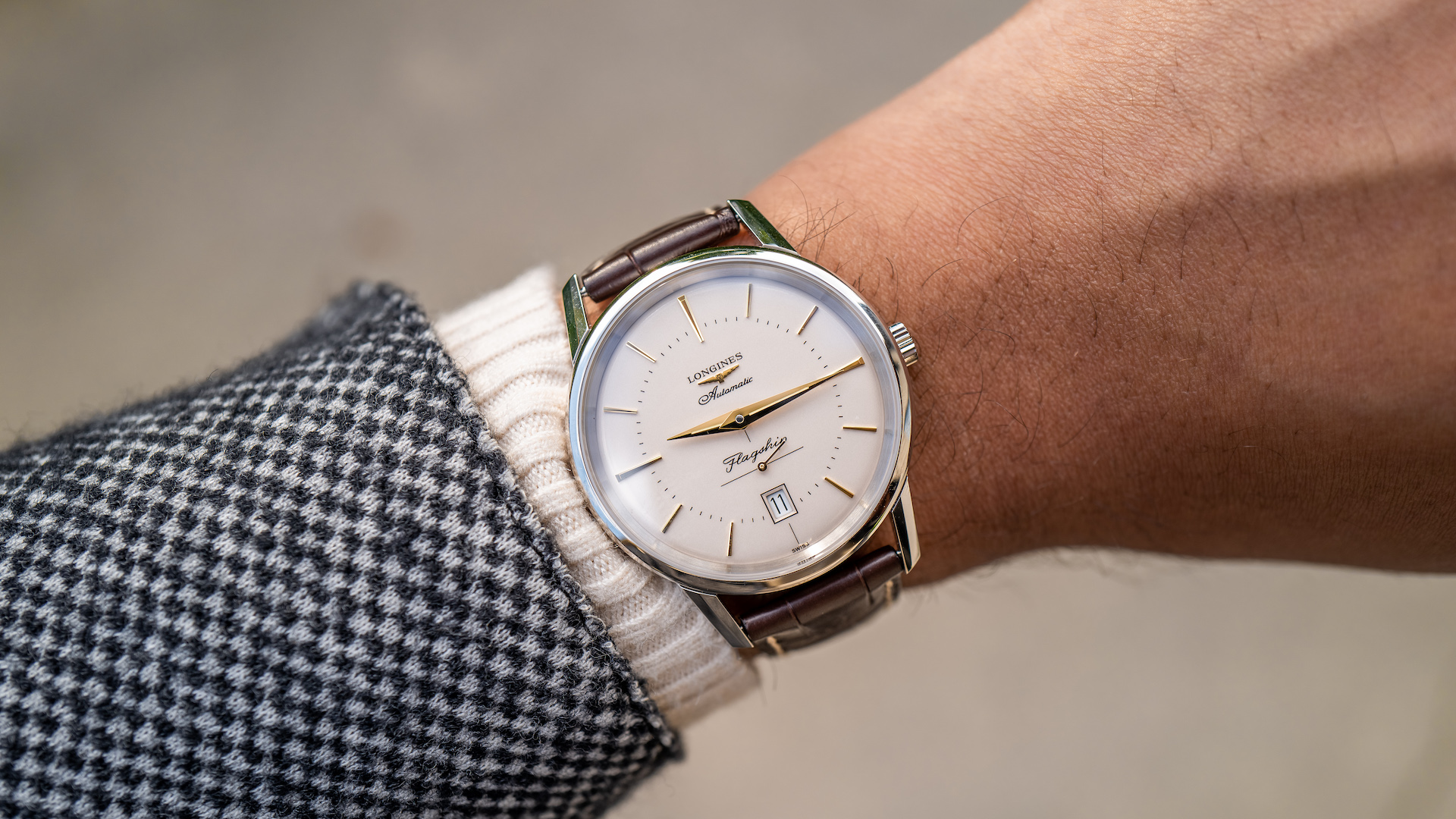 Watches like the Heritage Skin Diver, Avigation BigEye, Conquest VHP, Miltary COSD, and Heritage Diver 1967 (I could keep going) have gotten a lot of attention from watch media in the past few years. I love all these watches, but there is something to be said about Longines’ more demure, yet no less impressive, dress watches. Considering how many people are buying these Longines dress watches, it would be a disservice to our audience to neglect them. 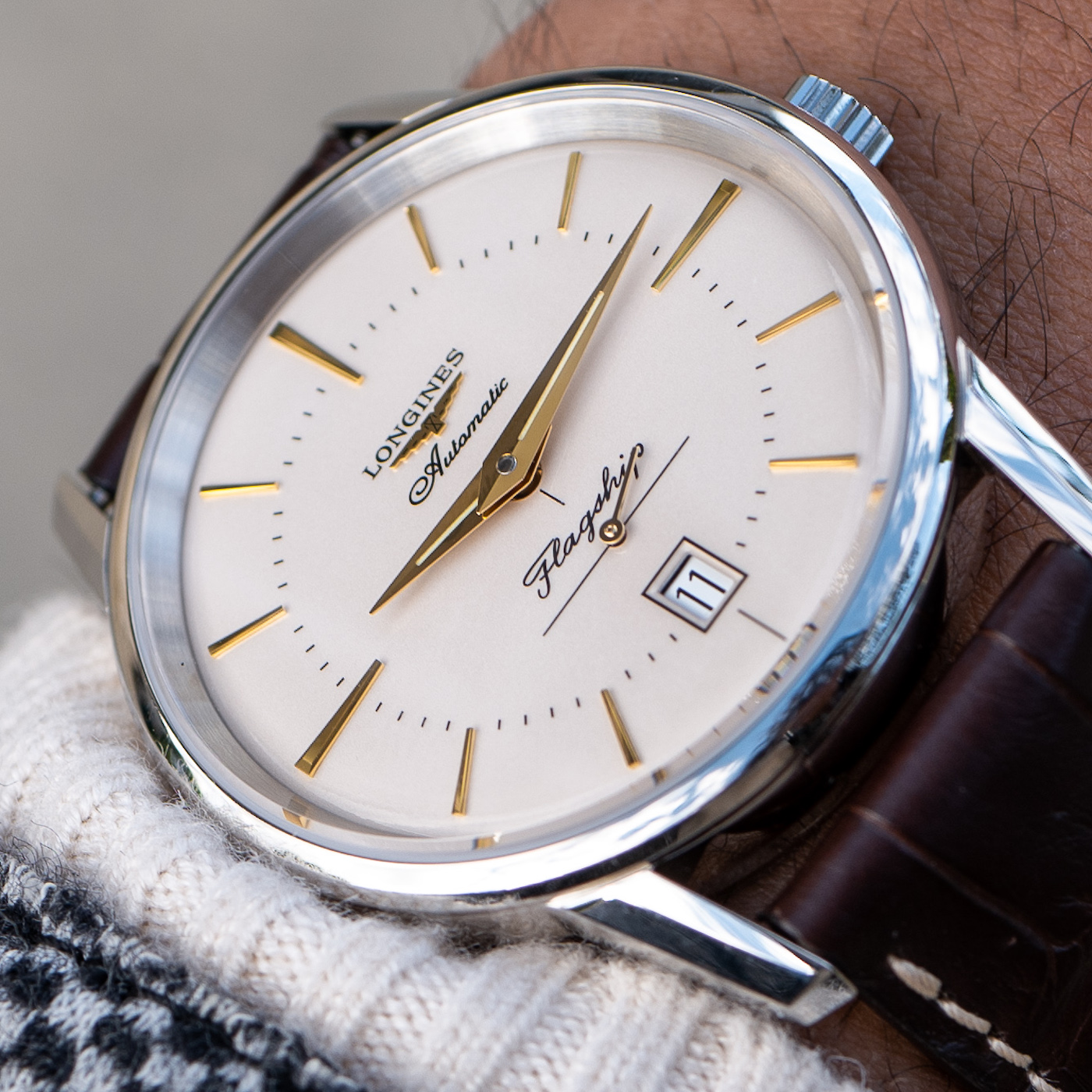 The Longines Flagship collection was introduced in 1957, and this contemporary Flagship Heritage carries a lot of visual cues and design choices from a few vintage models while making the necessary adjustments for contemporary tastes and preferences. Case size is increased, but I think, at 38.5mm-wide and 10.25mm-thick with a 46mm lug-to-lug, it hits that Goldilocks “just right” size for a modern dress watch. 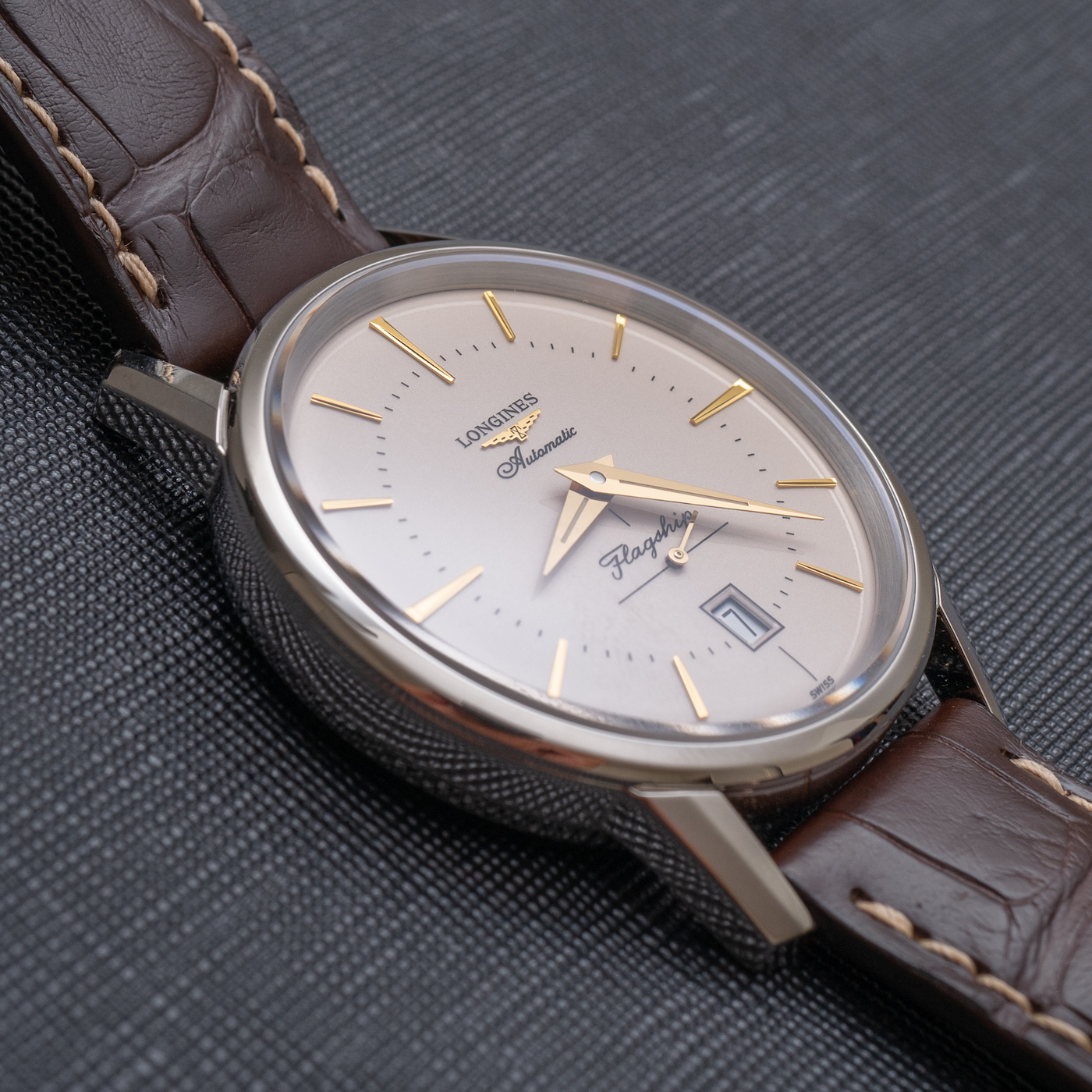 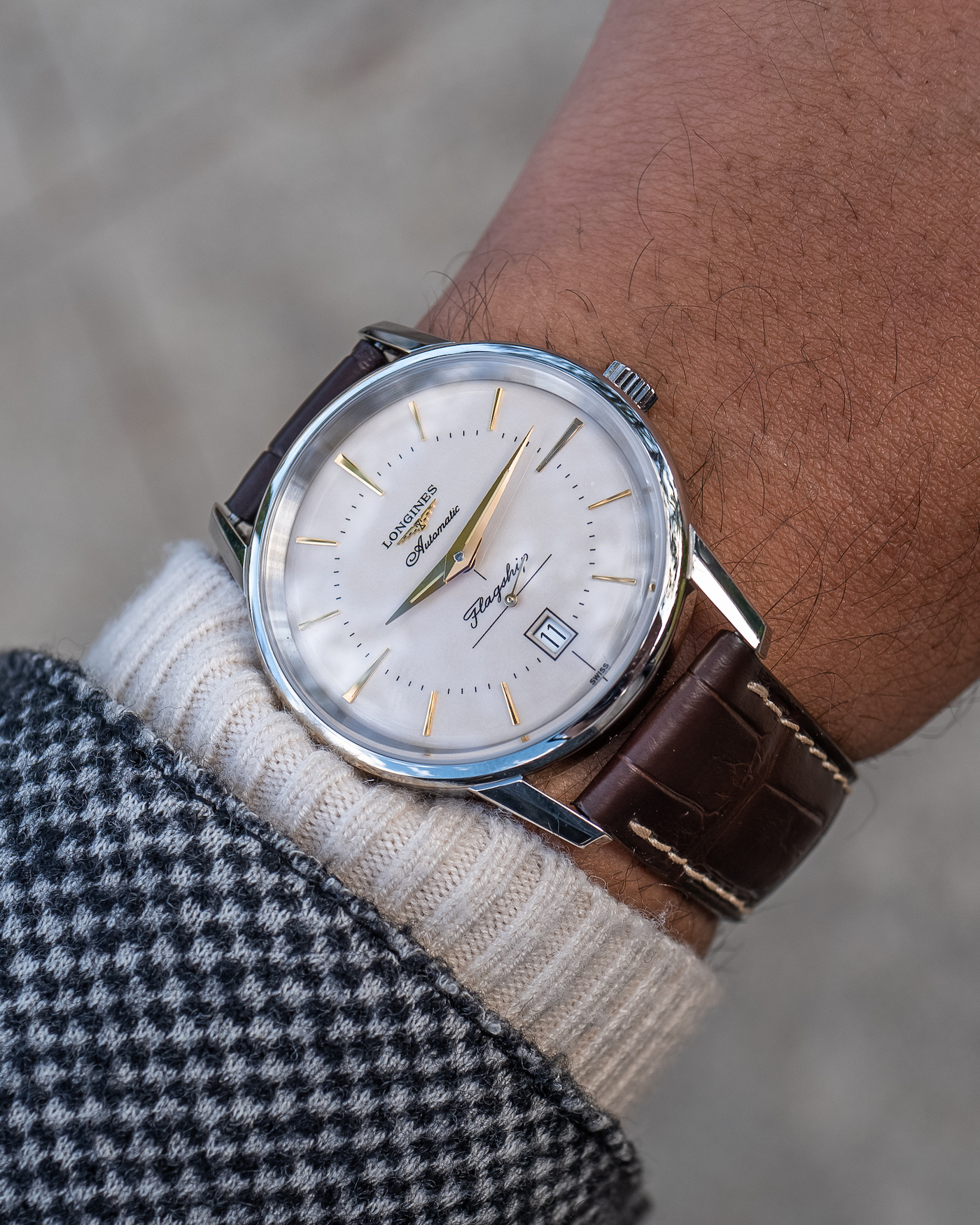 For some reason, Longines describes the dial as being “silver” but I think it’s closer to a very light cream color. It’s a mellow, subtle tone that nails the “vintage-inspired” aesthetic while staying far, far away from precarious fauxtina. The applied indices and Longines wings logo have some nice details and chamfering, which goes a very long way in contributing to how this watch really looks and feels like something a notch or two above its price point. The lugs also have decorative chamfering and serve as another subtle but refined touch. 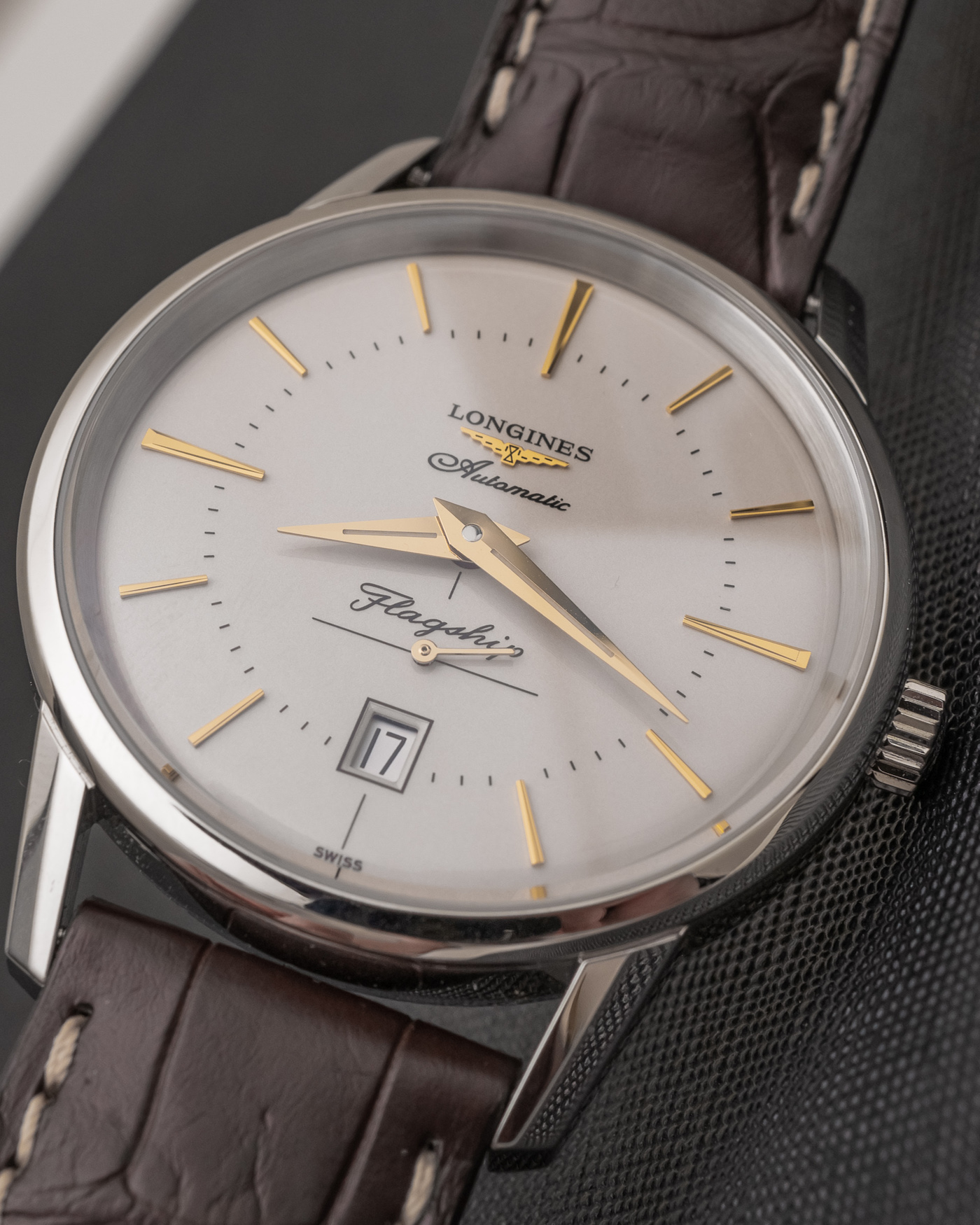 The dauphine hour and minutes hands have a thin strip of lume on each, which is barely noticeable at a passing glance but will make do when the functionality is needed. I believe vintage Flagship watches either had no date window or a date window at 3 o’clock. Here, the date window is at 6 o’clock, which is a decent concession that offers the obvious usefulness of a date-window with the aesthetic symmetry offered by its placement. Again, vintage style but with contemporary functionality that’s done in a very tasteful and refined way when necessary. Noticing the pattern here? 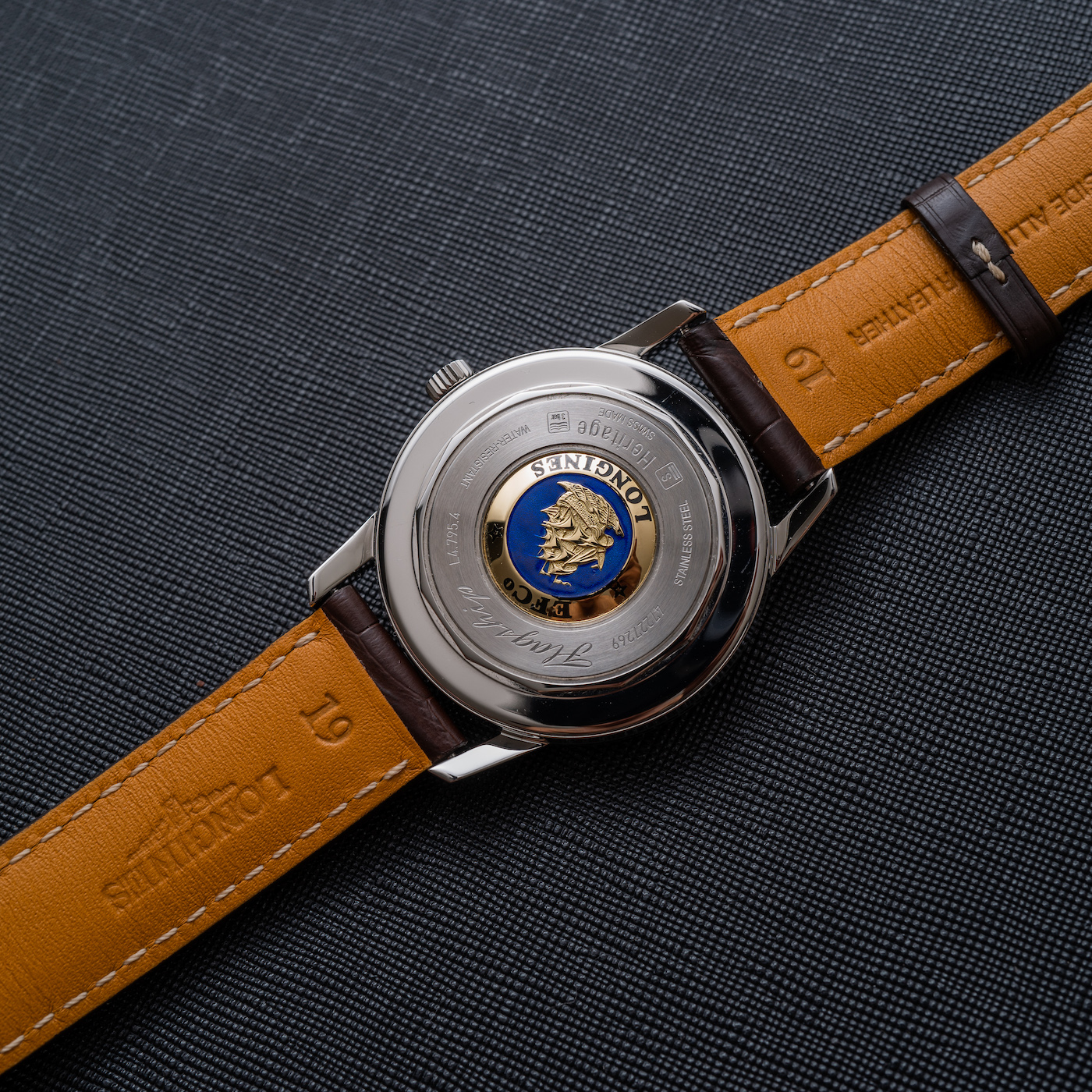 The decision to have a steel caseback with the enamel Flagship emblem found on the vintage models was likely an easy one, but still important to the watch’s design success overall. Rather than having an exhibition caseback that would ultimately fall flat, there is the decorative blue- and gold-colored circle depicting a pretty impressively detailed and textured ship design. It’s a bit of attention-grabbing flair that adds a ton of character to an admittedly conservative dress watch. 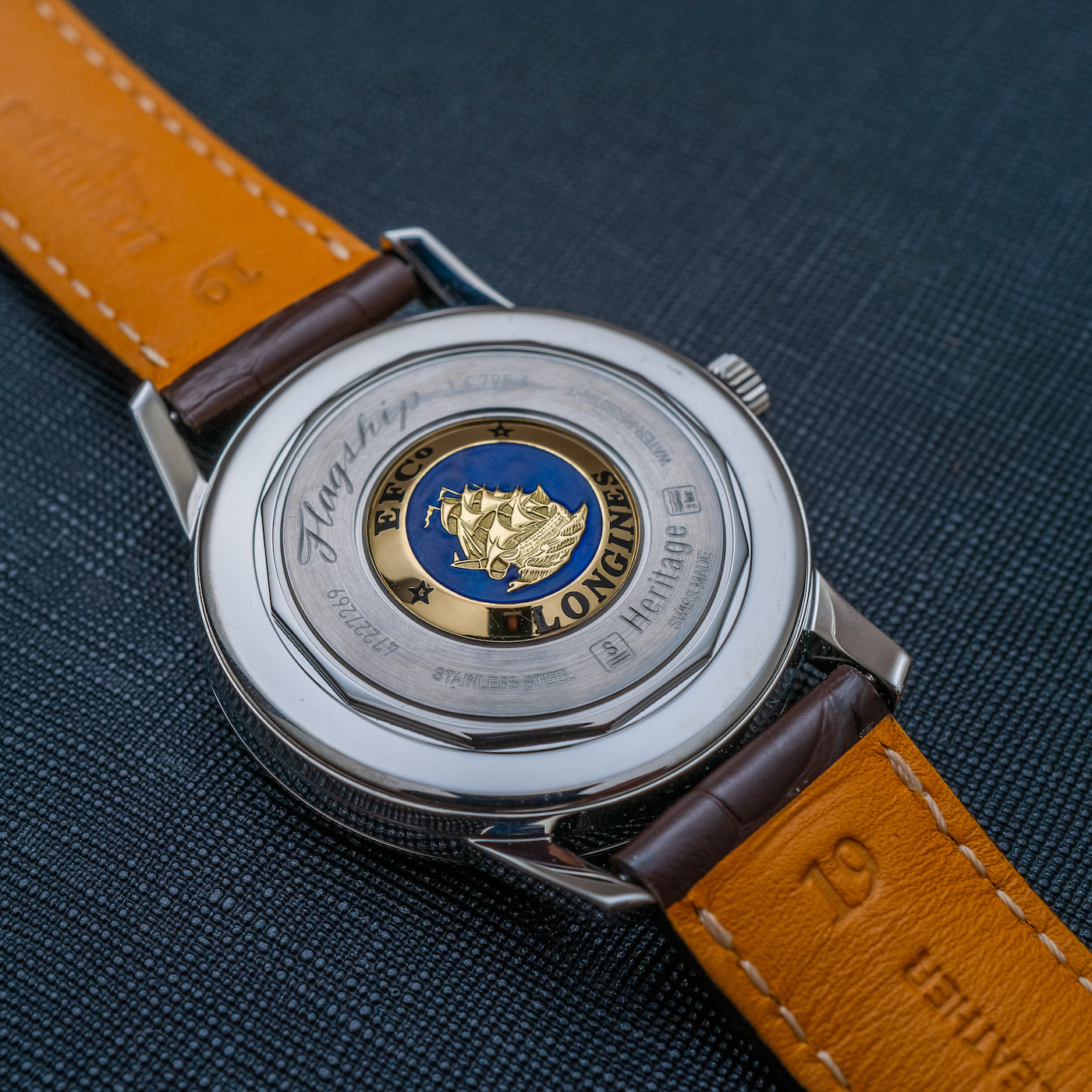 It’s a smart move that shows off a true-to-the-original vintage design touch that’s unique to Longines. Inside the watch is the L615 movement, which is a modified ETA 2895 that operates at 28,800 vph and has a 42-hour power reserve. It gets the job done as a tried and true movement, but it’s not going to make for a nice exhibition caseback view without some serious modifications. The closed caseback deals with that, though. 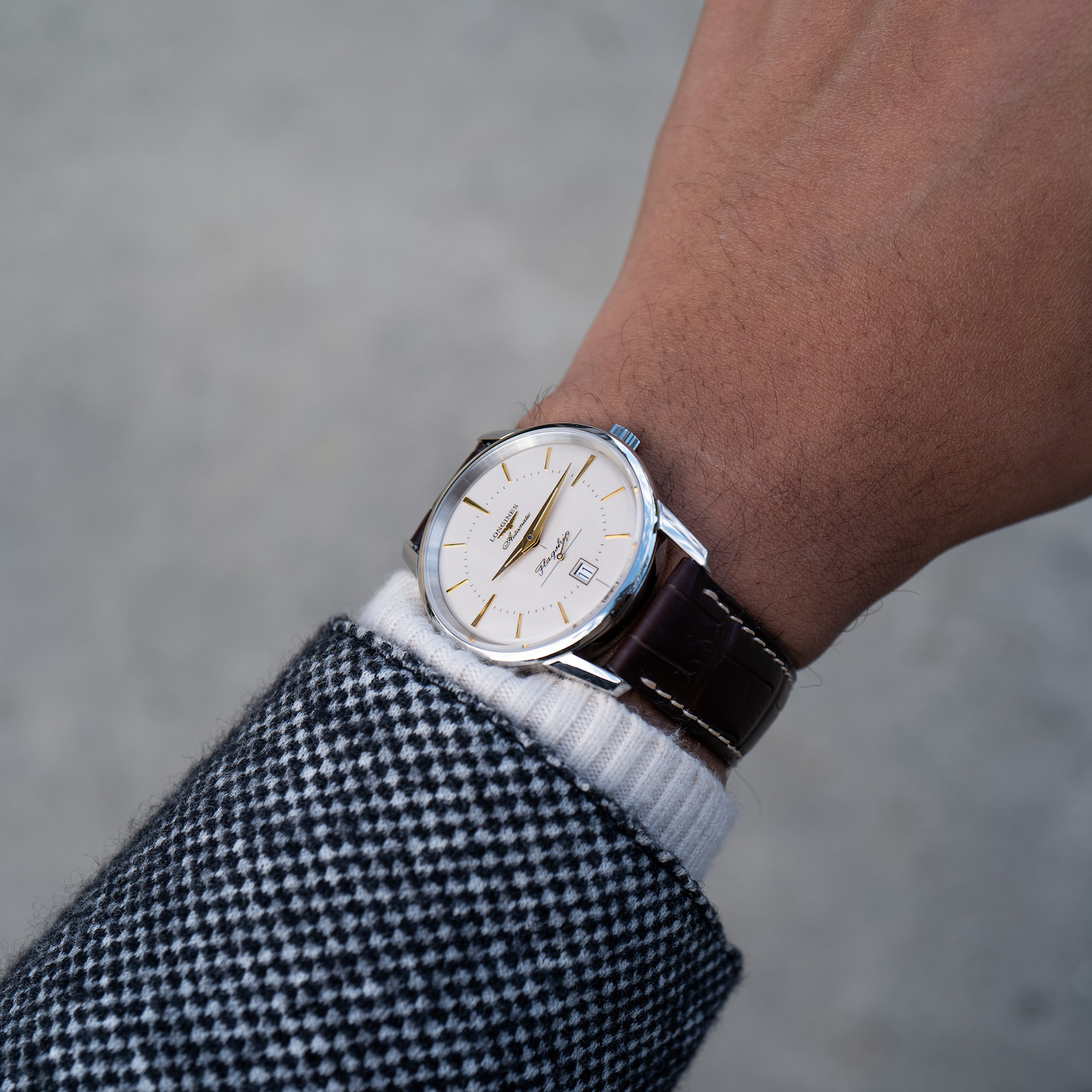 Yes, it is a conservative dress watch. Maybe that’s to your taste and maybe it’s not; there’s no wrong answer. What isn’t up to debate is the fact that there is a huge demand for these, especially among people who don’t regularly consume watch media or are as obsessive as I am and as you, the reader, likely are. The Datejust, Calatrava, Villeret, etc., are longstanding staples of their respective brand collections and cost multiple times as much as this Longines. What impresses me here is how Longines knocks the design out of the park while satisfying the market of buyers who want practical touches like a date function and lume. Again, the Longines Flagship Heritage ref. L4.795.4.78.2 is priced at $1,650. You can learn more at longines.com

Necessary Data
>Brand: Longines
>Model: Flagship Heritage ref. L4.795.4.78.2
>Price: $1,650
>Size: 38.5mm-wide, 46mm lug-to-lug, 10.5mm-thick
>Would reviewer personally wear it: Yes
>Friend we’d recommend it to first: Someone who wants or needs a dress watch that has timeless design but with modern finishing and construction. Or a casual buyer who wants one versatile and traditional watch to wear until they hand it down.
>Best characteristic of watch: The finishing on the case and dial.
>Worst characteristic of watch: The 42-hour power reserve