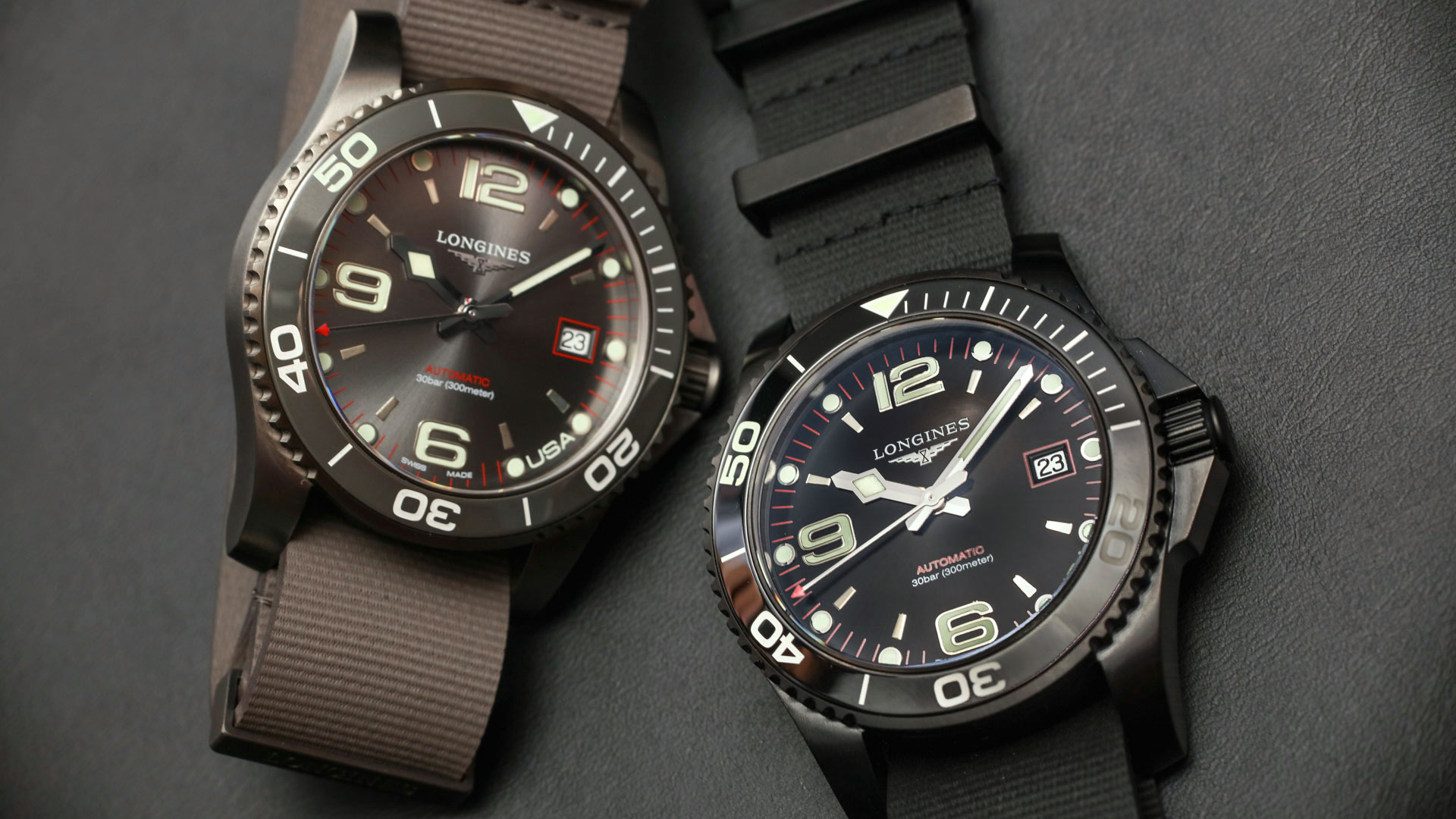 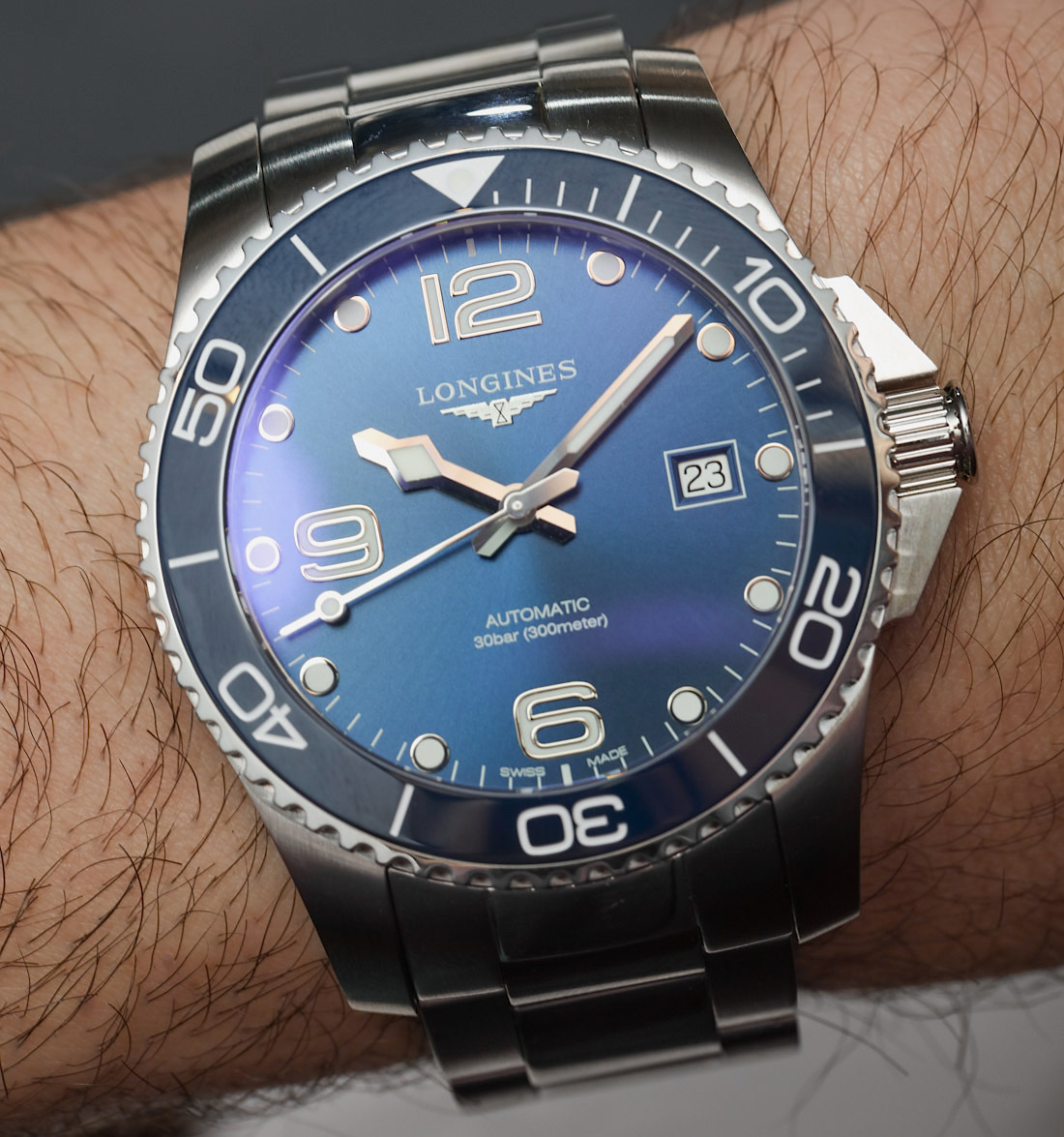 Longines, who have in recent years balanced their popular Heritage Collection (to include the excellent Longines Legend Diver) with their more modern Sport and Elegance ranges, unveiled an updated version of their decade-old HydroConquest at this year’s Baselworld. Longines’ most recent iteration of their modern sport diver is available in multiple case sizes, colors, and also as an automatic chronograph. Most prominently, the new Longines HydroConquest is equipped with a new for 2018 ceramic bezel insert, a feature fast becoming a mainstay in modern Swiss diving watches. In this Hands-On, we’ll dig into the 41mm version of the new HydroConquest to see if the new look and ceramic bezel add to Longines’ dependable design. 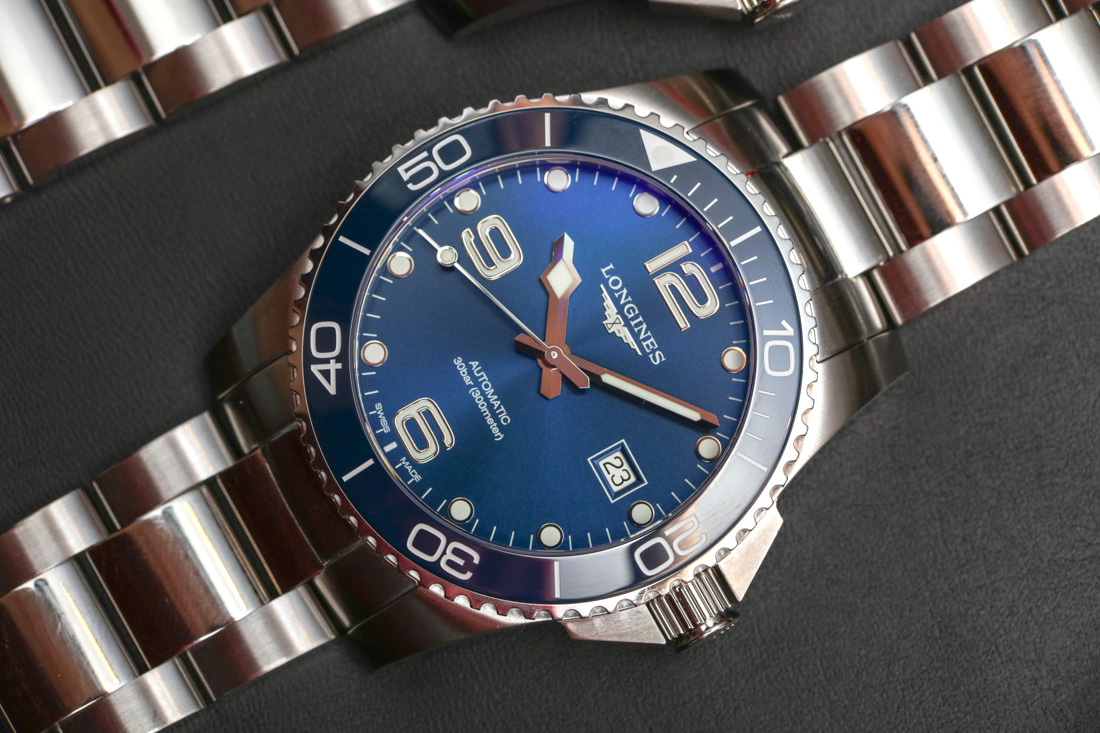 While the HydroConquest has been updated before, each time with subtle changes to the design, size, dial text, color, or strap and bracelet set up, the HydroConquest is in general a 41mm, 300m water-resistant stainless steel diver with a traditional aluminum bezel insert and a sapphire crystal. Though long considered a solid option in the affordable dress diver space, the HydroConquest was due for an update to keep the watch current in a fickle market. Offering the watch in new sizes helps broaden the appeal, with a new 43mm version to suit those after a larger wrist presence. 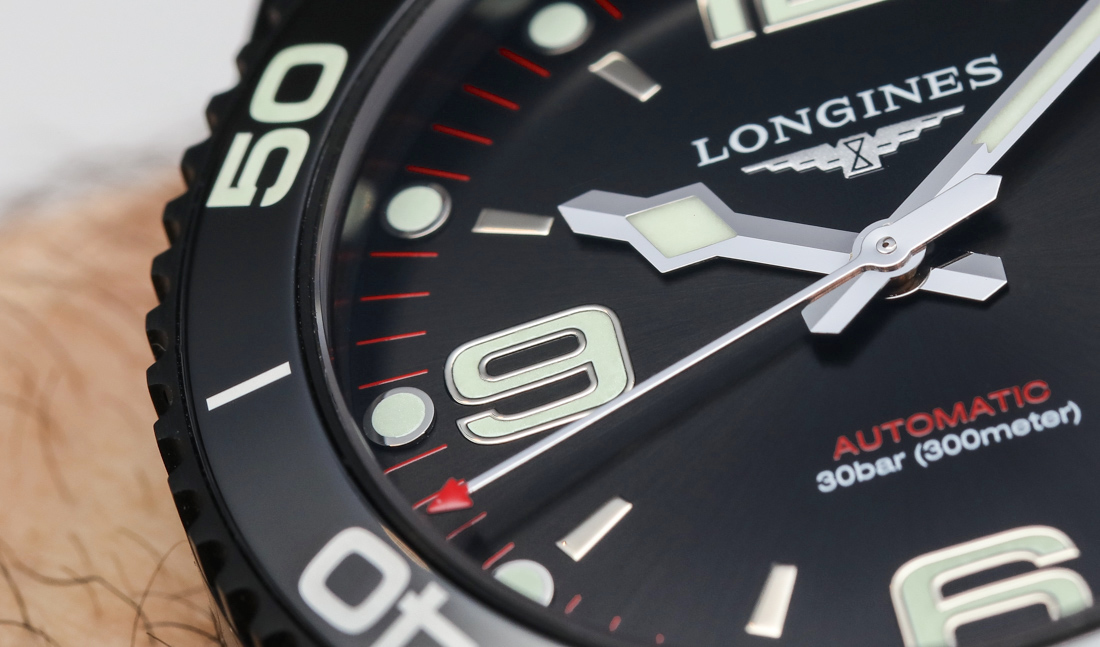 The mere fact that Longines have produced the HydroConquest for the last eleven years says something about public interest in the design. With the watch industry full to the brim with “vintage-inspired” models, especially diver’s watches, the HydroConquest has stood out as a piece which isn’t attempting to be anything other than a diver’s watch designed in and for the modern watch era, no faux-vintage lume needed or wanted. For me, that by itself is refreshing. 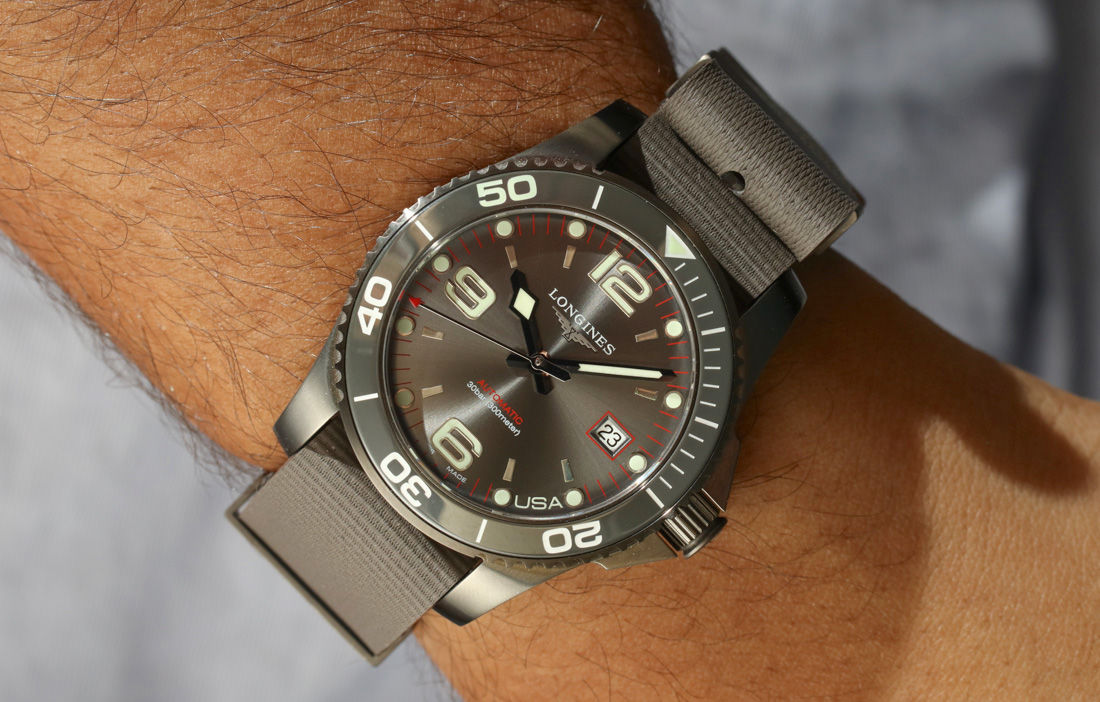 Other than the ceramic bezel – and we’ll get there in moment – the biggest change in the HydroConquest is the availability of new colors. Where the old model was available in black or blue and with or without the always in and out of vogue gold accents, the new HydroConquest has a more subtle approach. A grey dial is now available as an option as well as two new US exclusive versions in PVD black with a grey dial or a stainless steel, blue dialed model; both in 41mm. 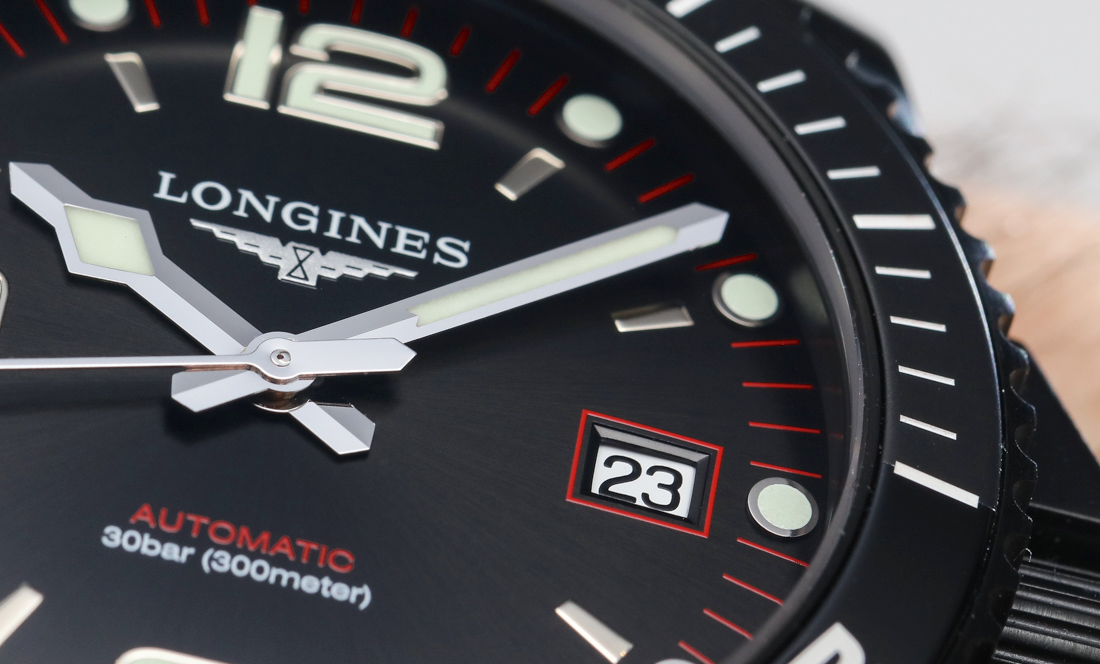 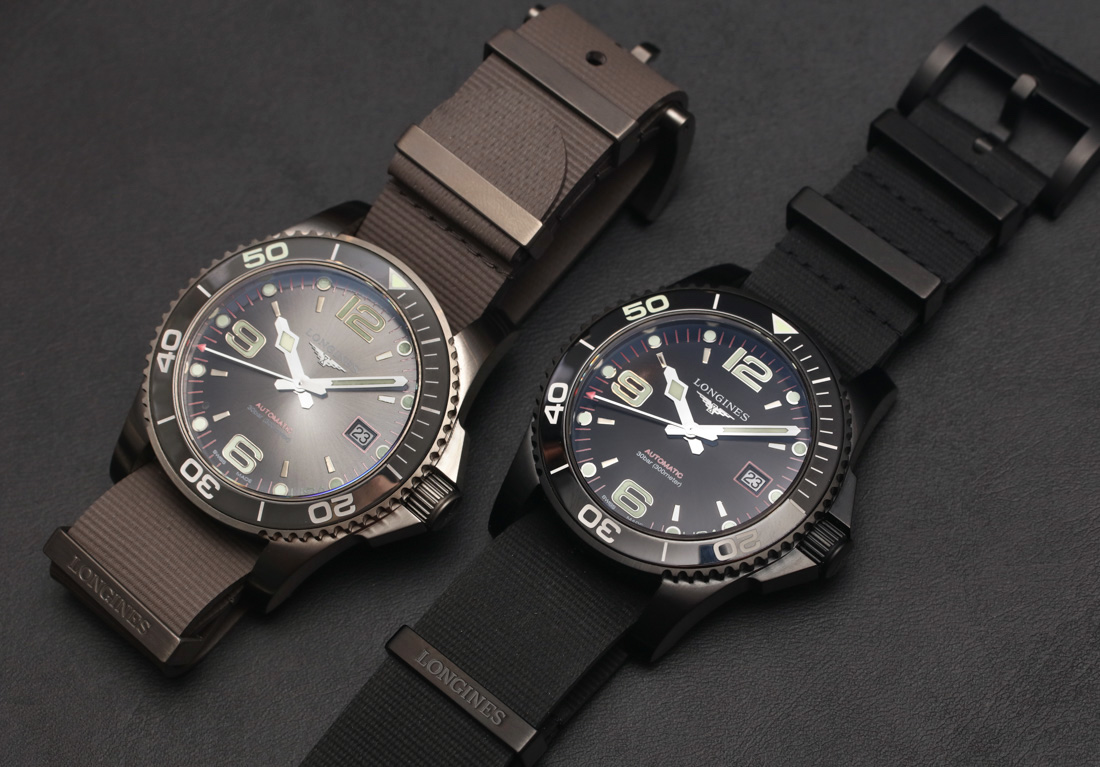 Other than color, the new Longines HydroConquest dial is much the same as before, with large lumed Arabic indices at twelve, six, and nine, minimal dial text, and a traditional date window at three o’clock. In fact, the only change I can find is the removal of the small trapezoidal applied elements, which previously sat just inside the lumed round hour markers. I’m glad they’re gone, as they didn’t do anything for me and made the dial appear a bit cluttered. The hands are also exactly the same as far as I can tell. Such small changes indicate Longines’ confidence in the HydroConquest as it already existed, and good for Longines for sticking to their guns.

The US exclusive versions of the watch have a few more updates, with “USA” printed at the dial’s perimeter between the four and five o’clock markers, a lumed ’50’ on the ceramic bezel insert for the 50 states, and a unique caseback. The US exclusive models are a limited release, with 1,000 total being produced, and also include new, color matched rubber NATO straps as an extra. 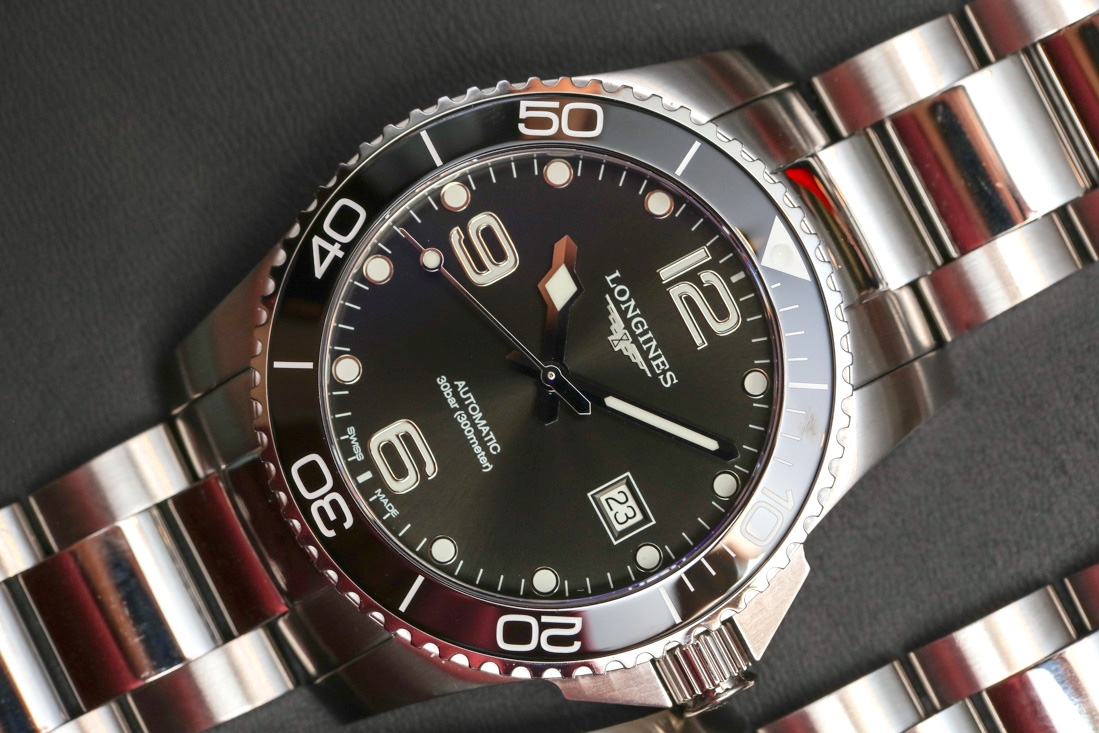 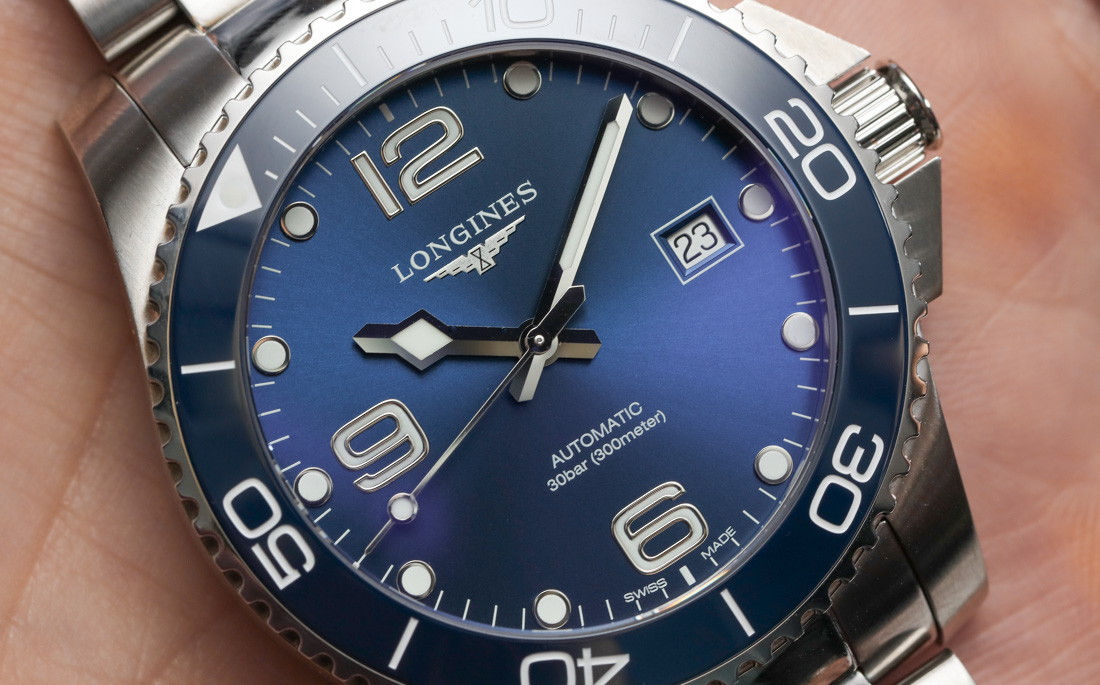 As the Rolex Submariner, Omega Planet Ocean, Bremont S500 and S2000, and so many other current Swiss watches indicate, ceramic bezel inserts are fast becoming the gold standard for “luxurious” dive watches. Ceramic as a bezel insert material adds depth and visual interest, increases perceived value, and legitimately adds to the durability and therefore functionality of a diver’s elapsed time bezel. On the new HydroConquest, the ceramic bezel is restrained in design and less busy than the previous aluminum insert. It has a very Rolex Submariner feel to it in terms of layout, and should make the already reasonably priced HydroConquest an even better buy for those on the fence.

For the perhaps few who might actually take the HydroConquest diving, a ceramic insert means a more durable diving watch. Even if scratched – and scratching ceramic is profoundly difficult – the minute markings should remain legible, ensuring the diver knows their elapsed time. That luxurious look and feel provided by ceramic, has made ceramic a near ubiquitous choice on new divers in a certain price range. 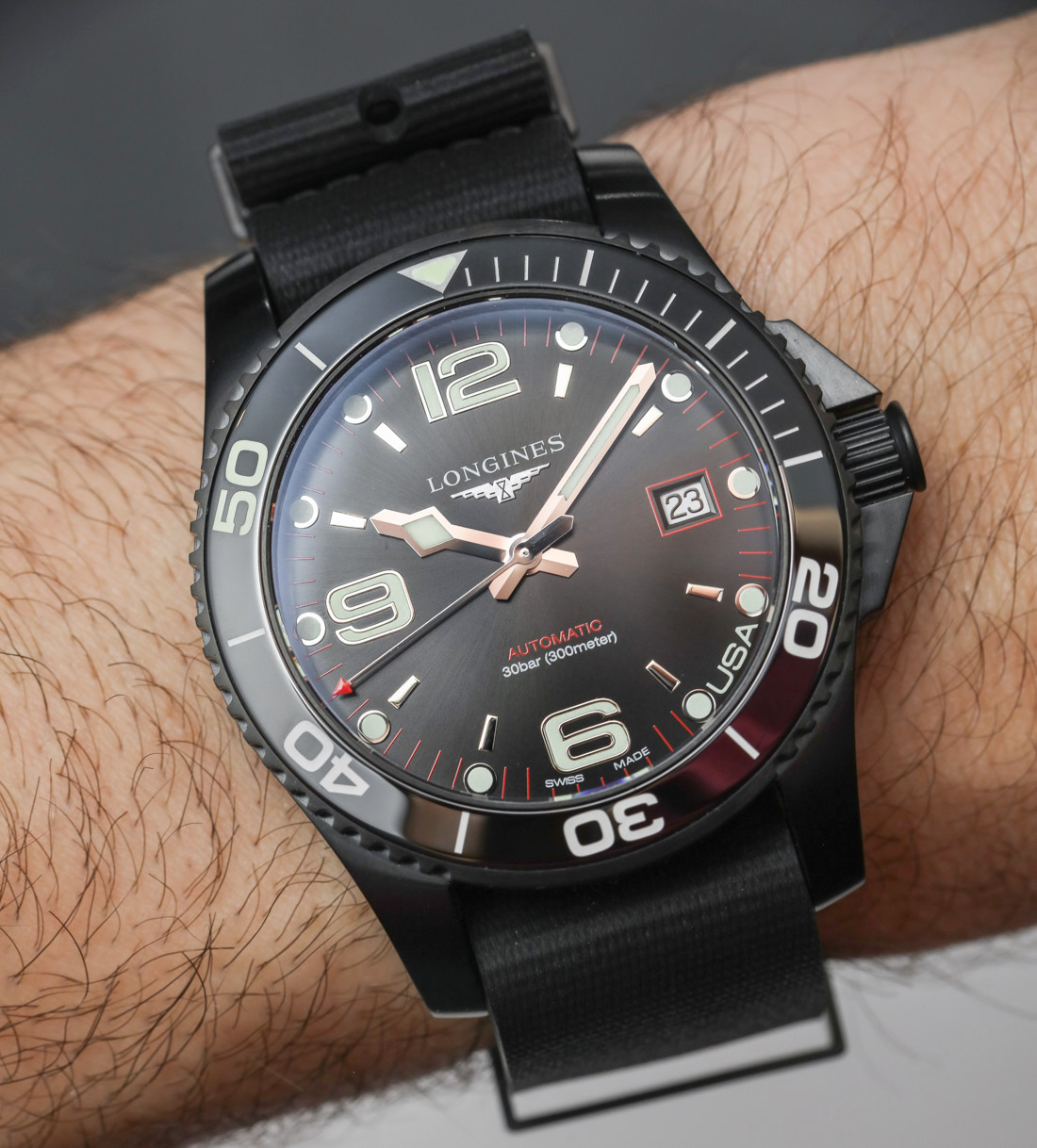 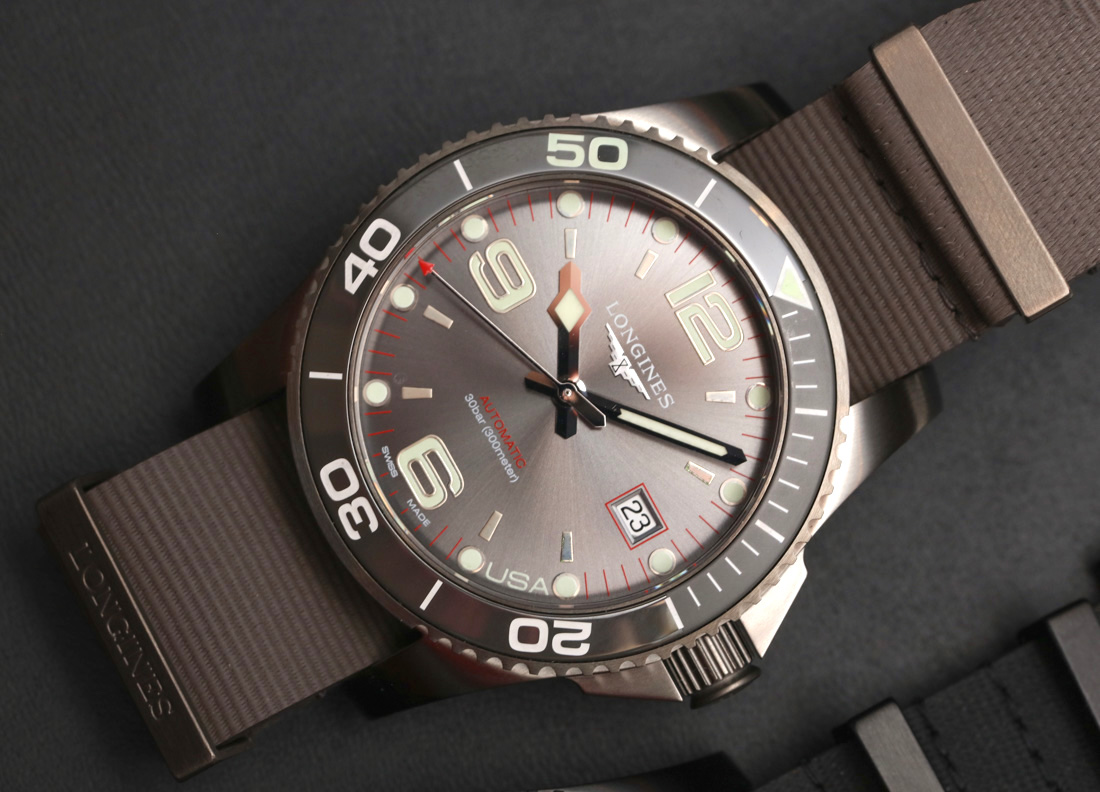 The case, bracelet, crown, and other elements on the HydroConquest are unchanged, which isn’t necessarily a bad thing as the watch has long represented a solid value in entry-to-mid level Swiss divers. I’ve long appreciated the HydroConquest case. Rather than reproducing one of many classic diver designs, the HydroConquest case is big and solidly built, featuring large angular crown guards and high-for-the price level of finishing. The large, screw down crown is still here as well. 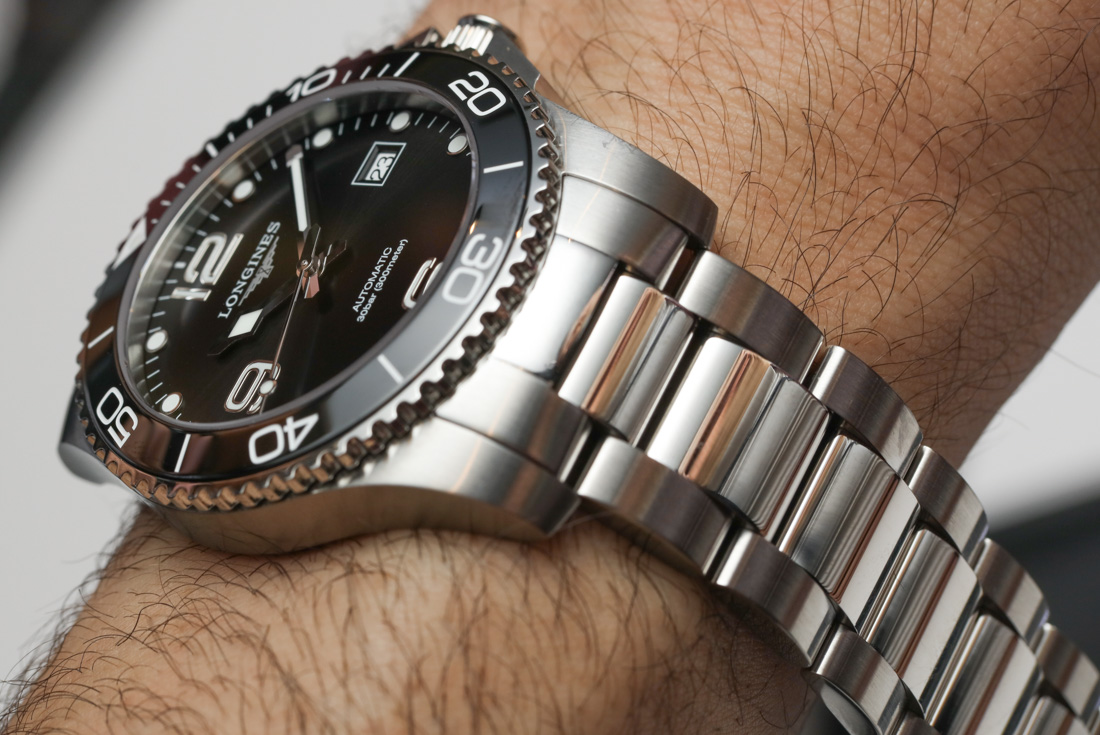 For the price, the stainless steel bracelet and its dual deployant clasp have always been excellent, though I take issue with polished center links wherever I encounter them. Where the watch has lost me in the past is in the busier dial, cluttered bezel insert, and aforementioned generally “blingy” polished elements. That’s just me. Though much is the same, a new rubber strap, now color matched to each of the new dial colors, is a cool update and adds something for those wanting more novelty. 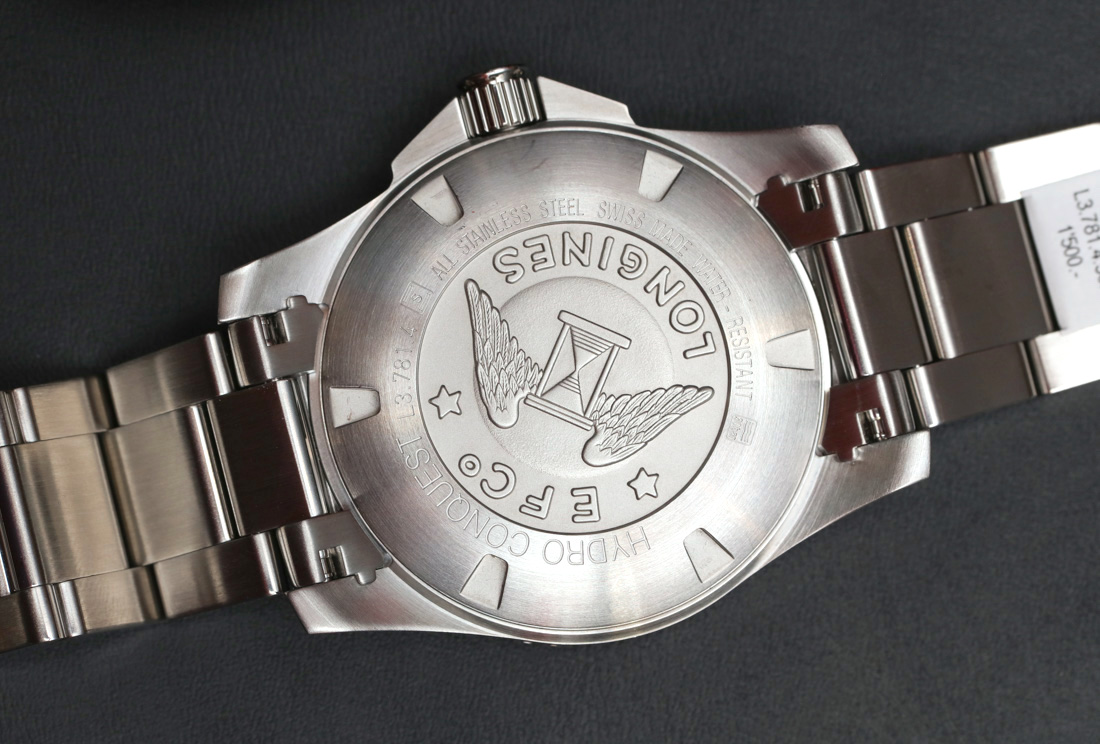 Longines, part of the Swatch group, have as you would imagine typically equipped the HydroConquest series with an ETA-based movement, whether quartz or automatic. This newest version of the HydroConquest comes powered with the Longines Caliber L888.2, an ETA 2892.2 based automatic movement oscillating at an eyebrow raising 25,200 vhp – quite a bit slower than the 2892.2’s well known 28,800 vph. The reason behind the slower rate is power reserve, with the L888.2 sporting an impressive 64-hour reserve in comparison to the base movement’s 42 hours of operation. A modified movement, even if only in rate/reserve, adds to the value argument which is central to the HydroConquest collection, bolstering the already solid deal considering the ceramic bezel insert and Swiss heritage. 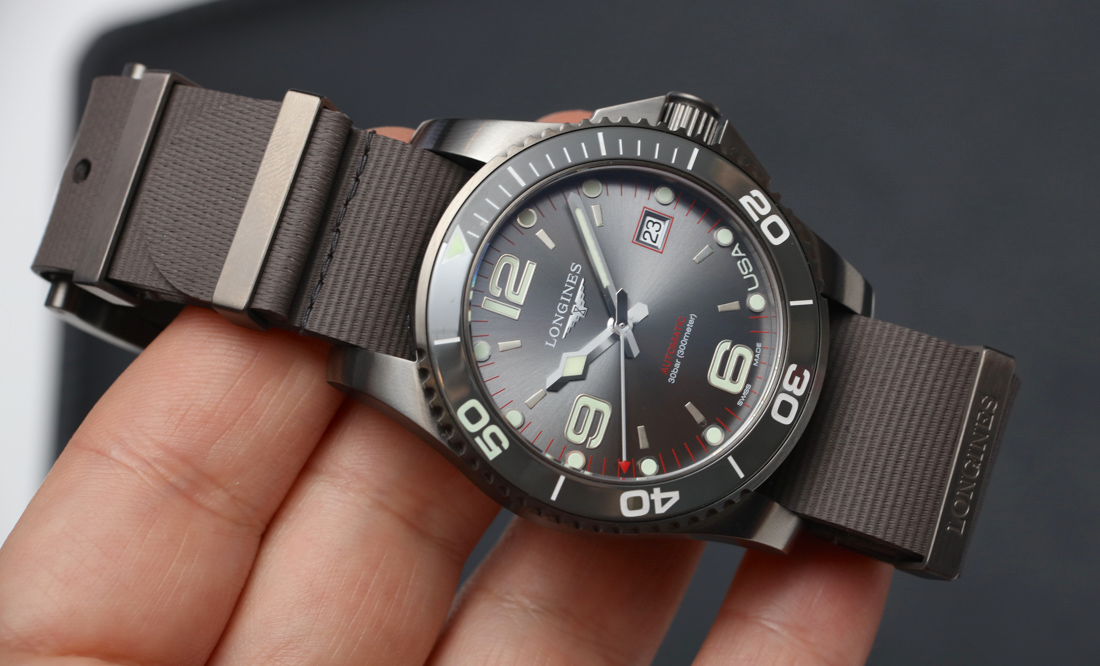 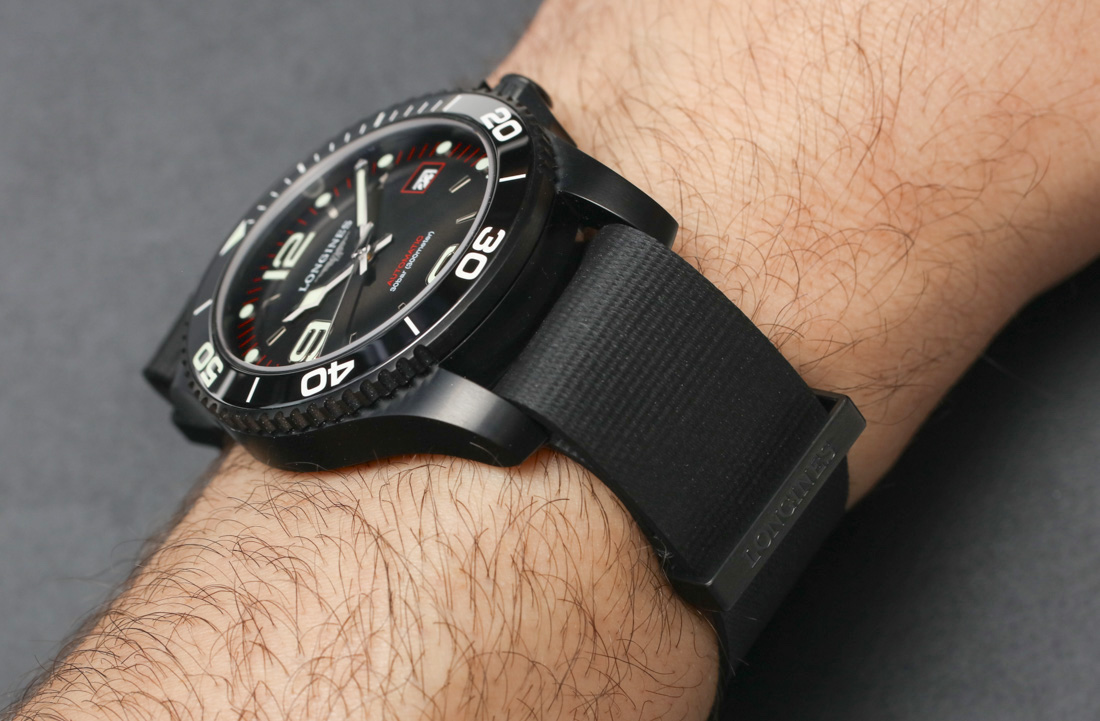 Viewed together, the updates to the new Longines HydroConquest are, other than the ceramic insert, minimal. Longines already liked the looks of their tried and true sport diver and have clearly tread carefully in terms of updating the design. The addition of a ceramic bezel does add a lot and certainly packs more value, and we anticipate price to be just around $1,500.  The limited versions are, as you would expect, a bit more expensive at $1,800 for the stainless/blue dial configuration and $2,100 for the PVD/grey dial version. For those who already like the HydroConquest, the new watch is a refreshing update that doesn’t stray too far from the original design. In a sea of vintage reissue pieces, the Longines HydroConquest is a design of this century with plenty of modern appeal in a reasonably priced package. longines.com