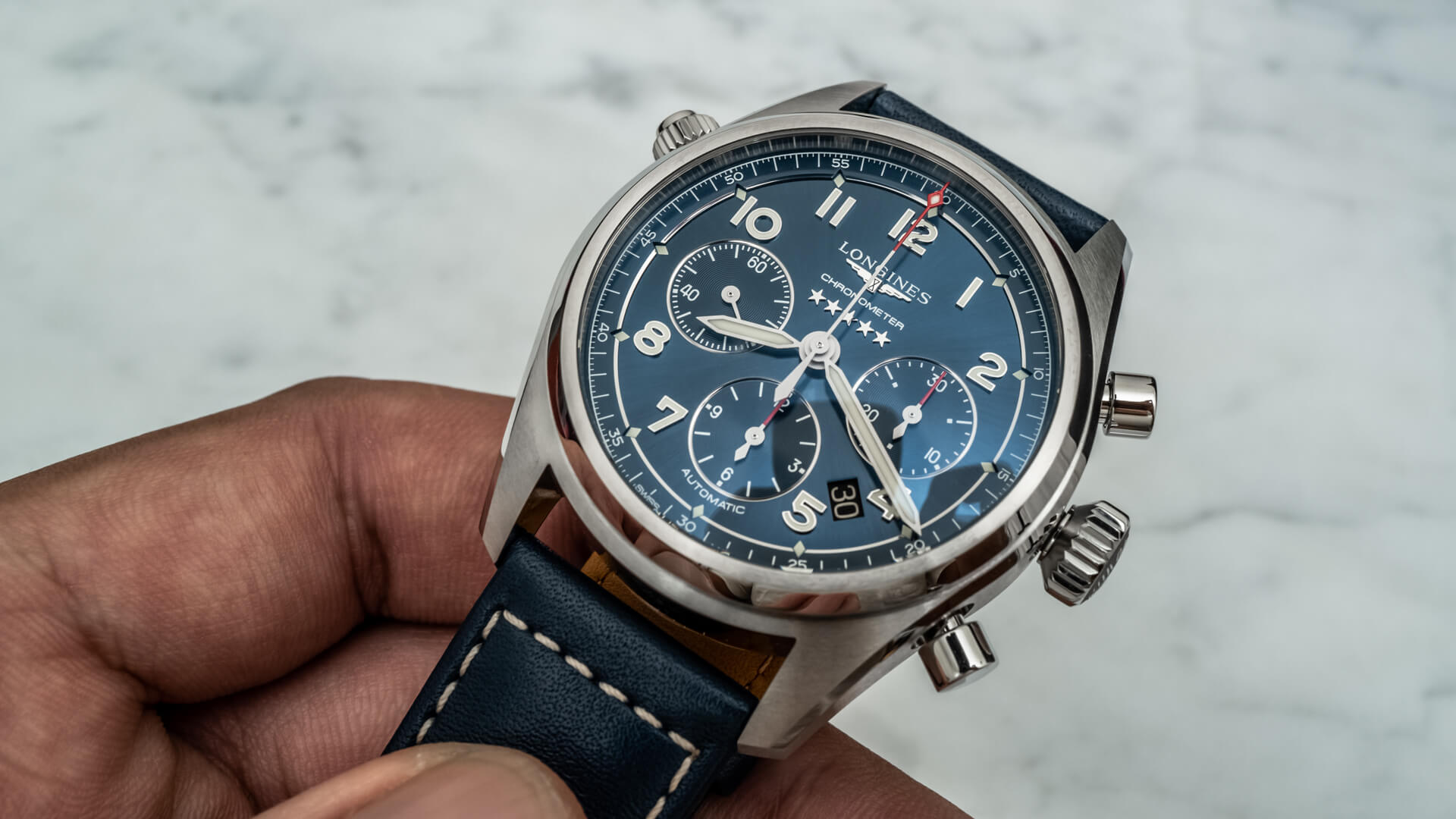 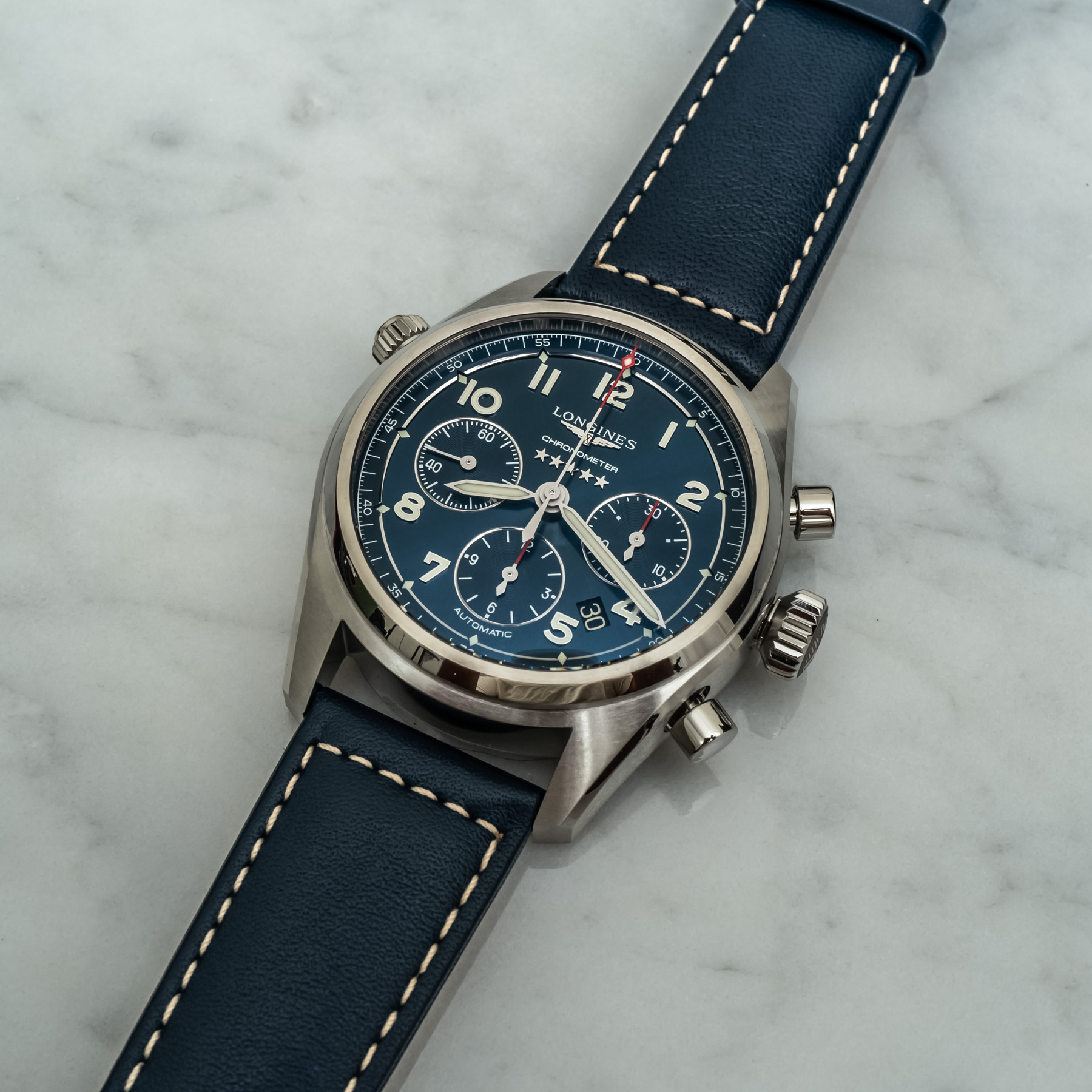 I recently went hands-on with the Longines Spirit three-hand watch, one of two in the inaugural releases for this new pilot’s watch collection from the brand. Here, I go hands-on with the more complicated sibling with a chronograph and its own design touches. The Spirit Chronograph is another ideal example of what Longines does best — check off more boxes than just about anyone else while offering serious value. You could (like many, many others) do a lot worse than a handsome and well-finished COSC-certified chronometer with a column-wheel chronograph at just a hair over $3,000. There are some decent chronographs out there for that price but, again, not easy to find one that checks all those boxes. 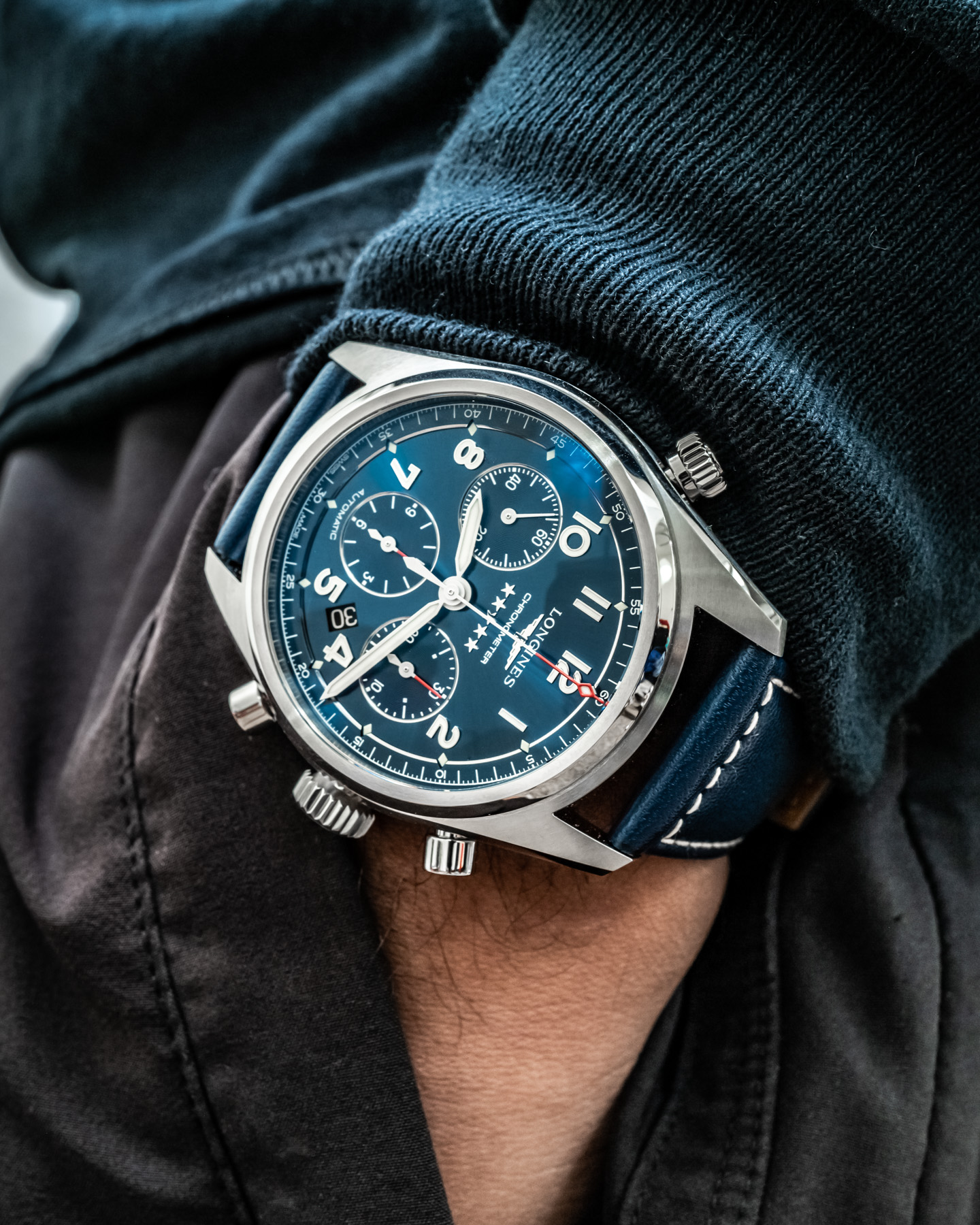 Just like the three-hander Spirit I covered, the Spirit Chronograph seen here is the blue-dial version, though it also comes in white and black. The Spirit is “vintage-inspired,” but I see this watch as a more contemporary and mainstream option in the Longines chronograph catalog, while something like the Avigation BigEye clearly leans all the way in that direction. While I love the BigEye, I don’t love its 30M of water resistance, especially when compared to the Spirit Chronograph’s 100M. 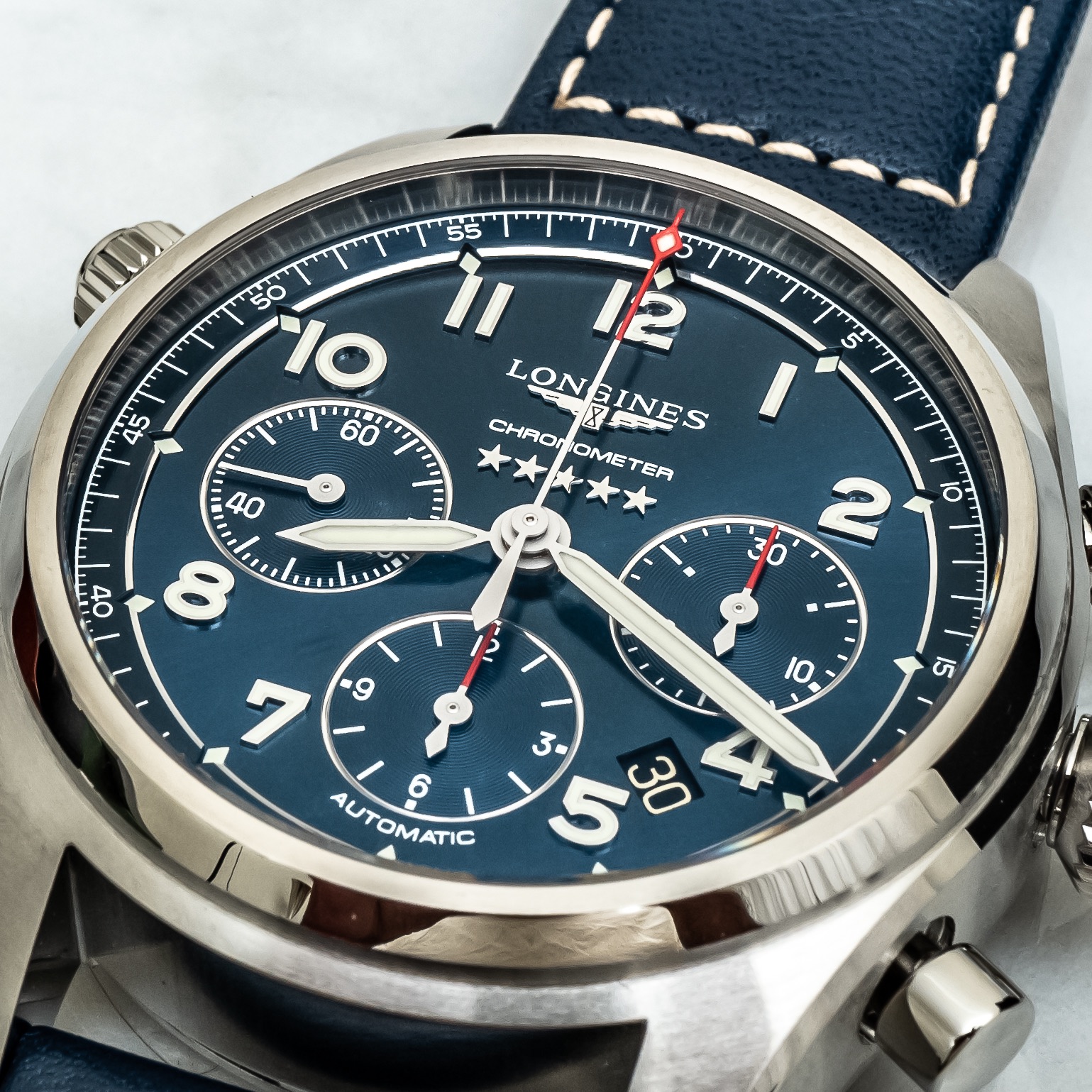 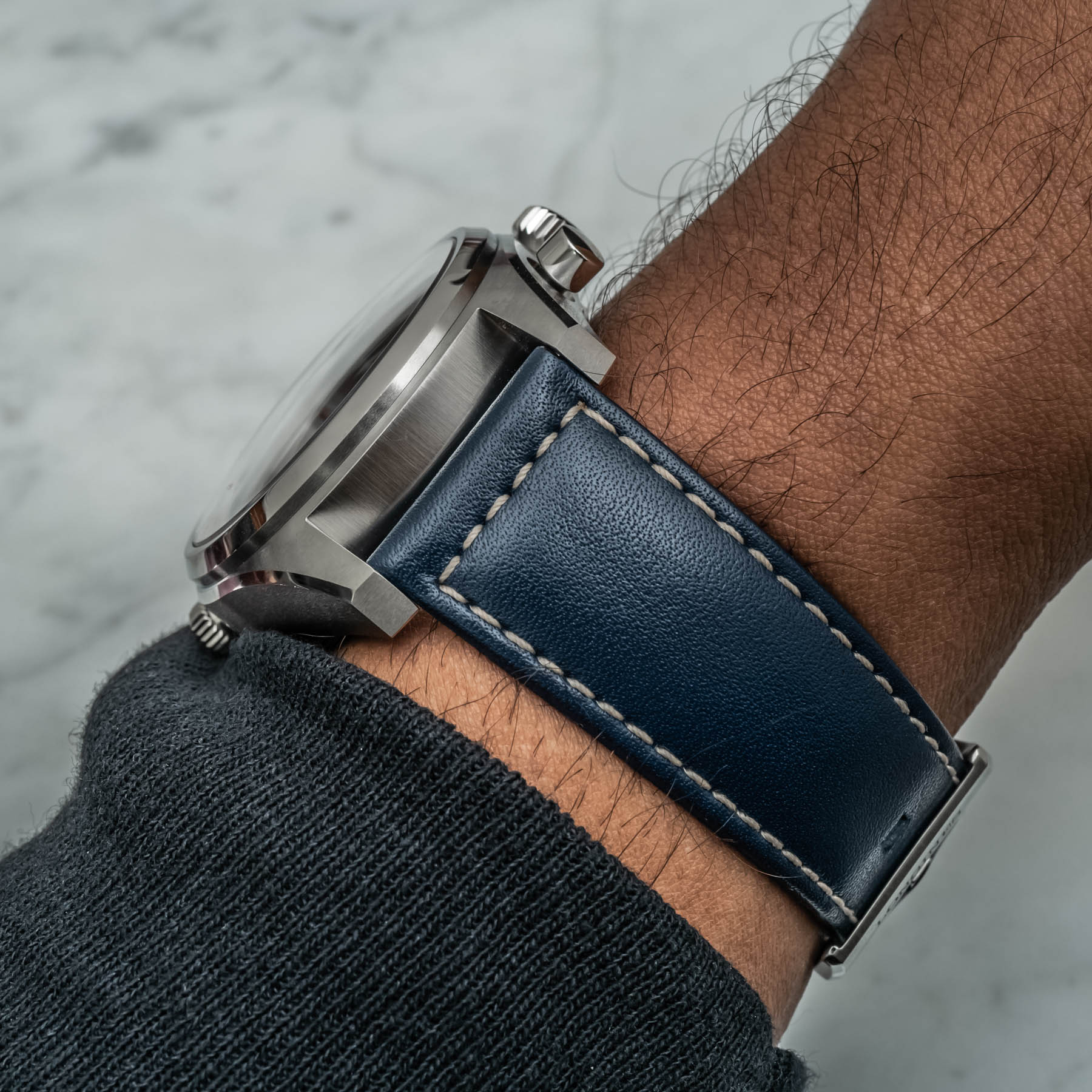 The case here measures 42mm-wide and a substantial 15mm-thick, so anyone seeking a smaller-wearing chronograph should look elsewhere. With the chronograph pushers and the pusher at 10 o’clock for quick date-change, Longines was clearly aiming for real wrist presence, and it certainly succeeded at that. I do also think the design team at Longines wanted to make sure the Spirit Chronograph has its own personality and identity, smartly avoiding blending in too easily with every other chrono out there. The extra pusher and those five stars on the dial immediately let you know that this is a Spirit Chronograph, even though it’s the inaugural model. Good on Longines. 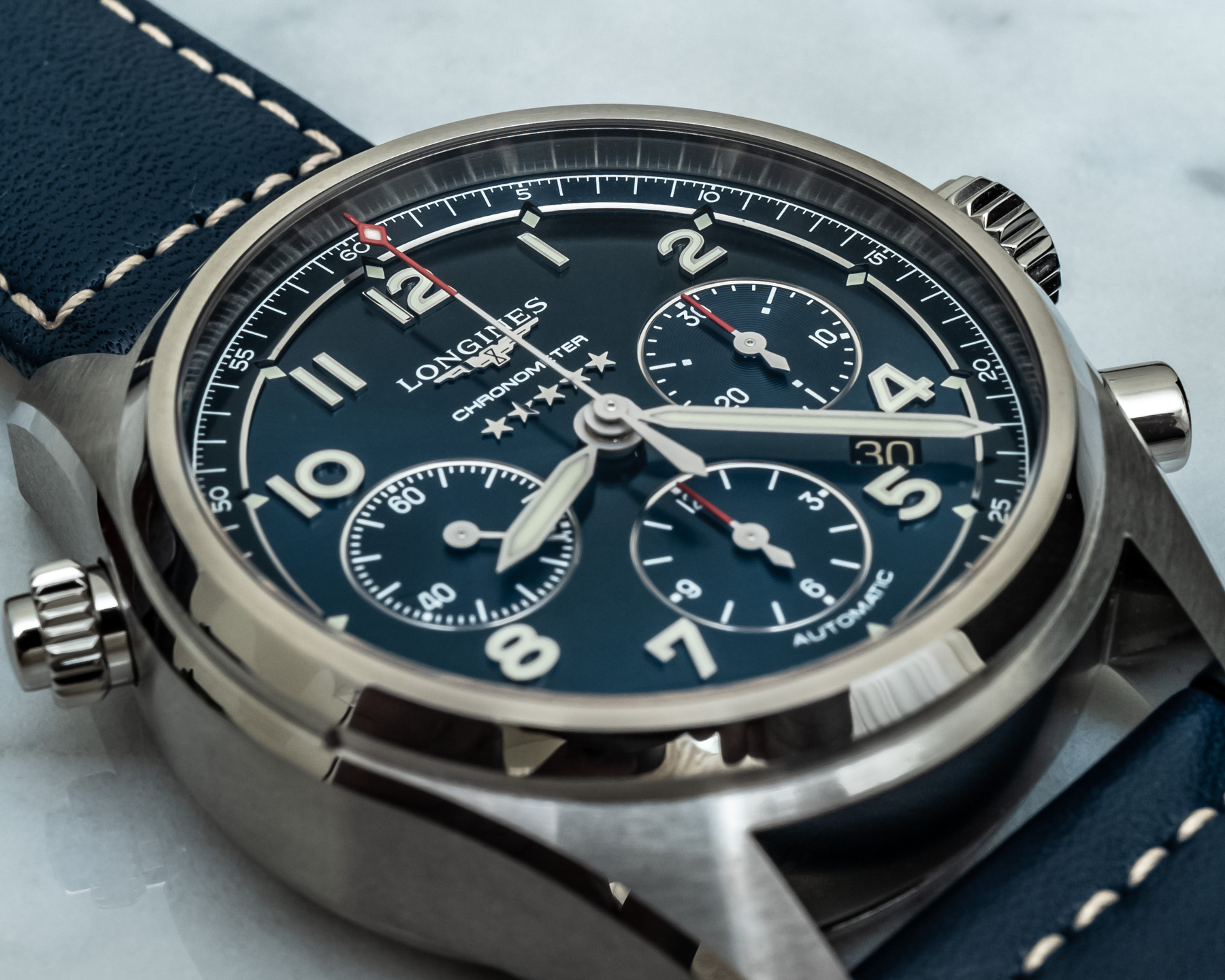 One note about the pusher at 10 o’clock: It is screw-down to avoid any accidents. It’s simple enough to use; each push advances the date forward. Honestly, it’s pretty handy to have around if this isn’t your everyday wear. Considering the 100M water resistance and overall toughness of the case build, I can see this being a great weekend watch as well as a pretty solid pick for a first chronograph. 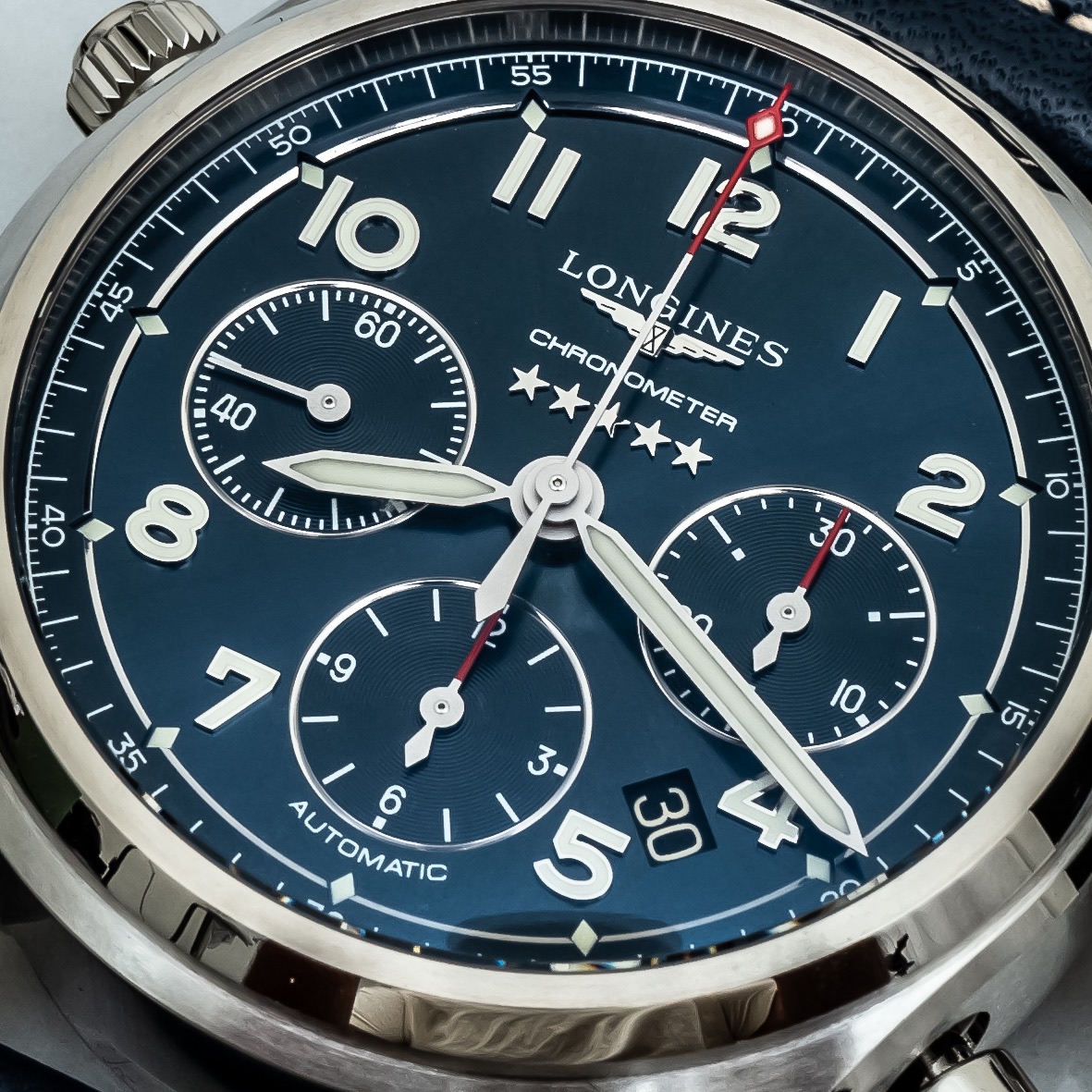 The dial shares many of the same visual elements as the three-hander but with a lot more going on. The five-star logo borrowed from the vintage Admiral collection is moved up from 6 o’clock, creating a full stack with Longines wings logo, “Chronometer” text beneath that, and the five stars beneath that. I don’t mind it, but I know there are people who get a little triggered by that kind of design element. What does irk me a bit is the date window. While I love a date window at 4:30, the 4 and 5 hour numerals surrounding it make me want to go up for air. It’s just a little too cramped for me. 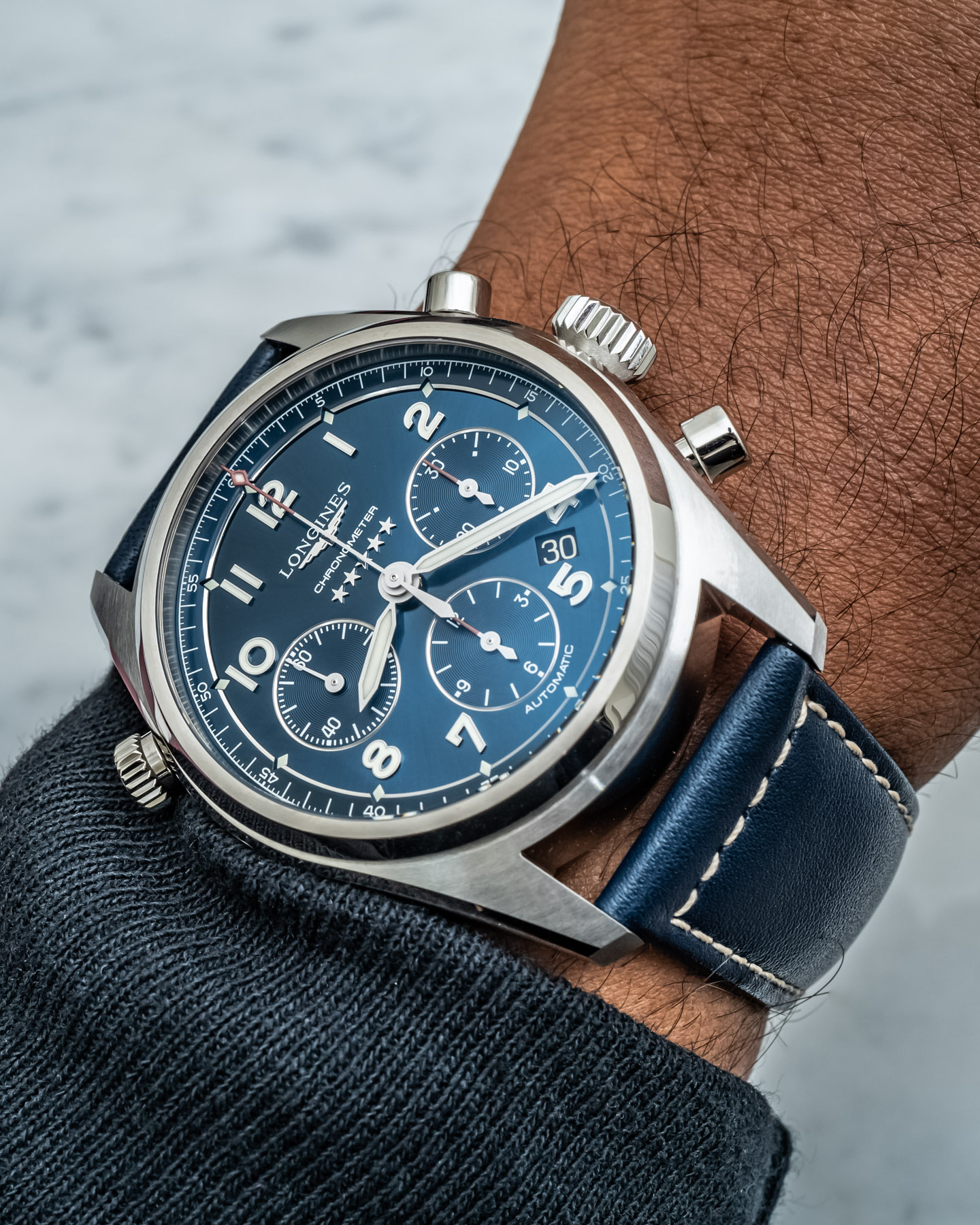 That said, the lumed applied numerals and diamond indices are really high-quality, and the subtle guilloché work on the chronograph subdials (running seconds, 12-hour, and 30-minute) add a nice bit of visual polish as well as some texture to the dial. The lumed hour and minute hands are nice and long, just as on the three-hander, and legibility leaves nothing to be desired. The model seen here has radial brushing and a sunburst navy blue dial, though the other two have pretty unique identities of their own. The black-dial model is more matte, while the white dial has a granular finish. They each really do seem to have distinct personalities, rather than copy/paste variants with colors switched out. 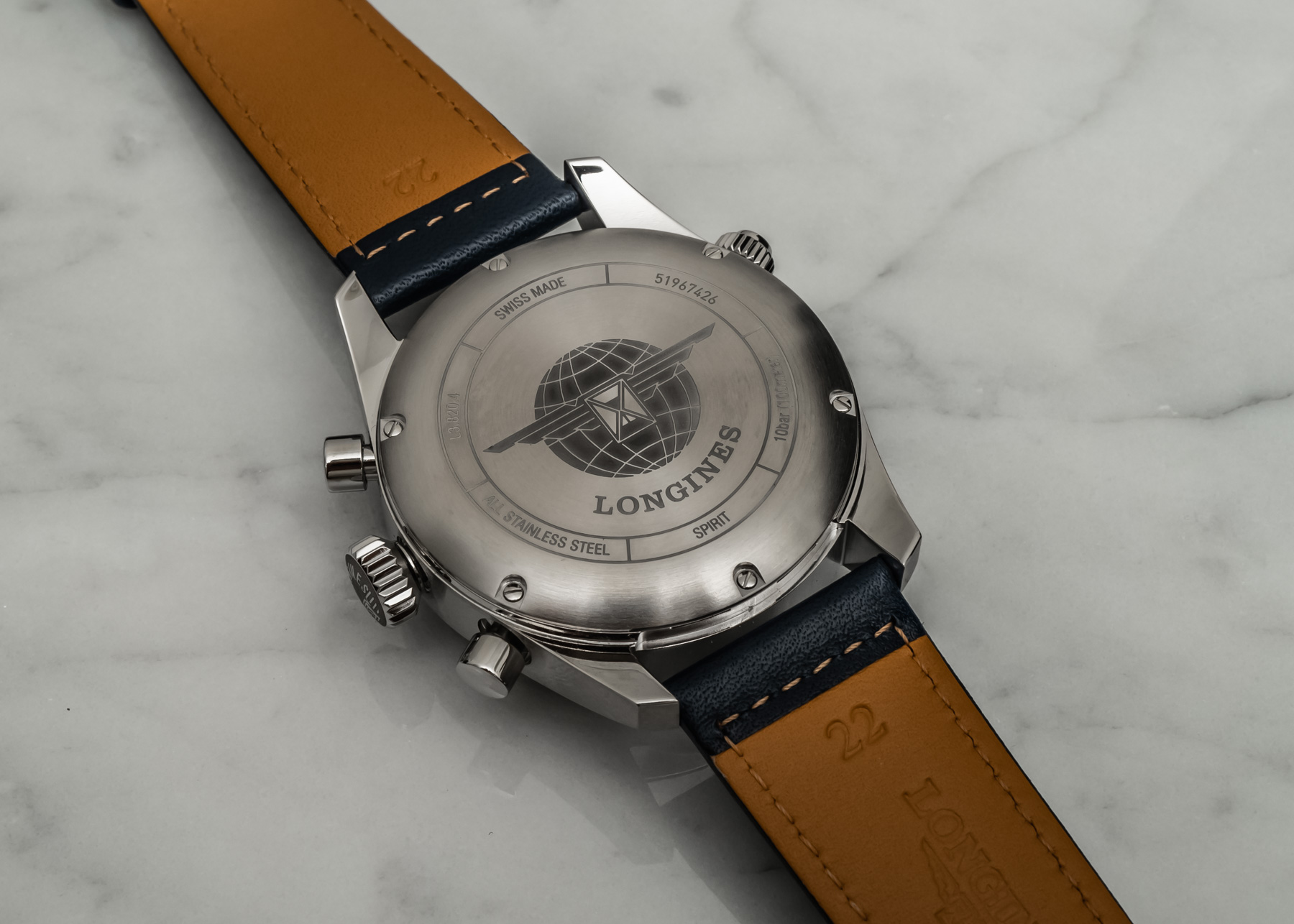 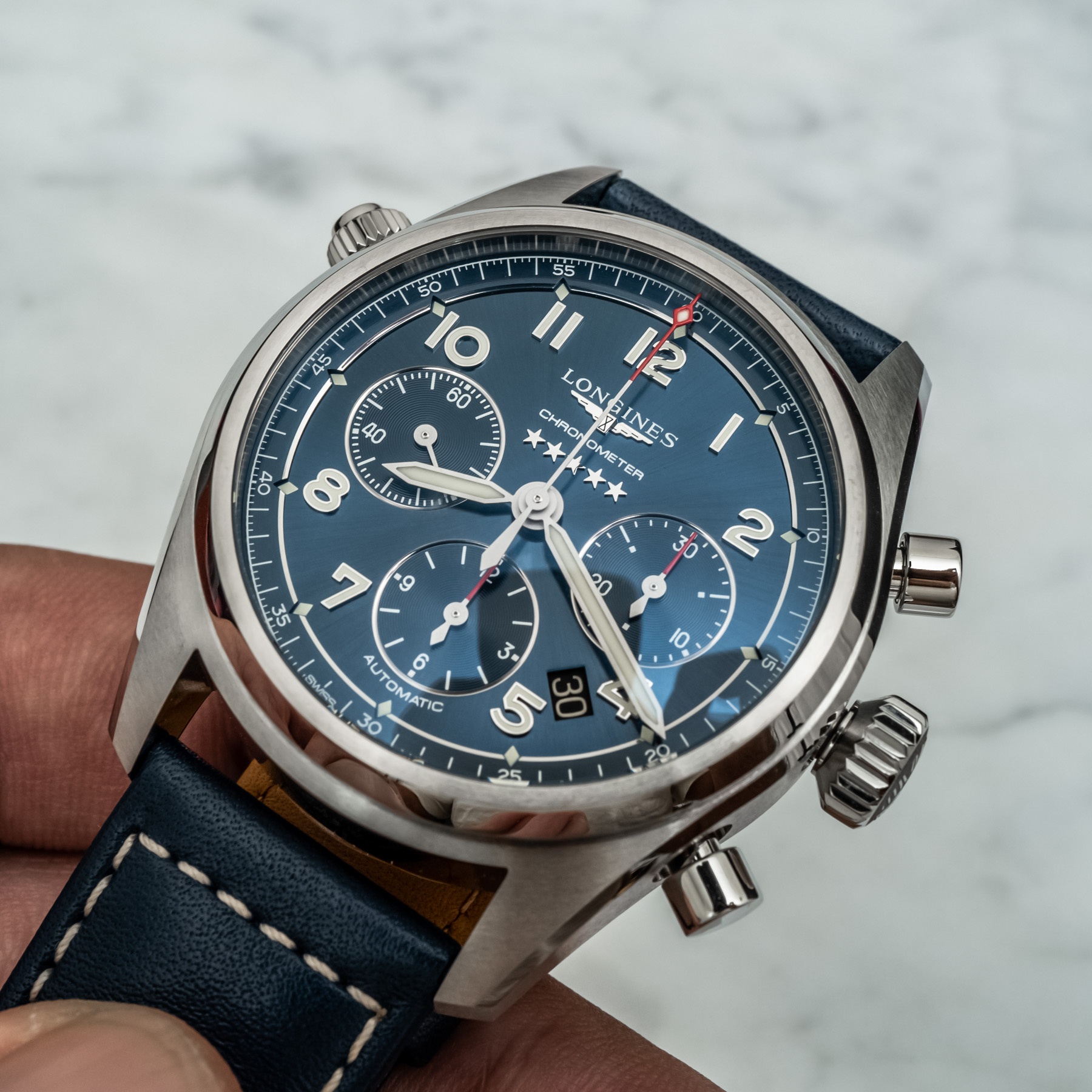 Turning the watch around reveals the enclosed steel caseback with the Longines wings logo engraved. I’ve said it before and will say it again: If the movement isn’t something truly worth admiring, spare the exhibition caseback/cost of movement finishing and pass the savings down to the consumer. The movement here is the COSC-certified L688.4 caliber, which is an ETA-based automatic column wheel chronograph with silicon hairspring. It operates at 28,800 vph and has a 64-hour power reserve. It’s a solid movement that is the result of Longines being under the Swatch Group and all the resources and benefits that provides.

Though the Spirit Chronograph I wore came on the matching blue calfskin leather strap, it is also available on a steel bracelet, and both have the same price of $3,100. You can learn more at longines.com.