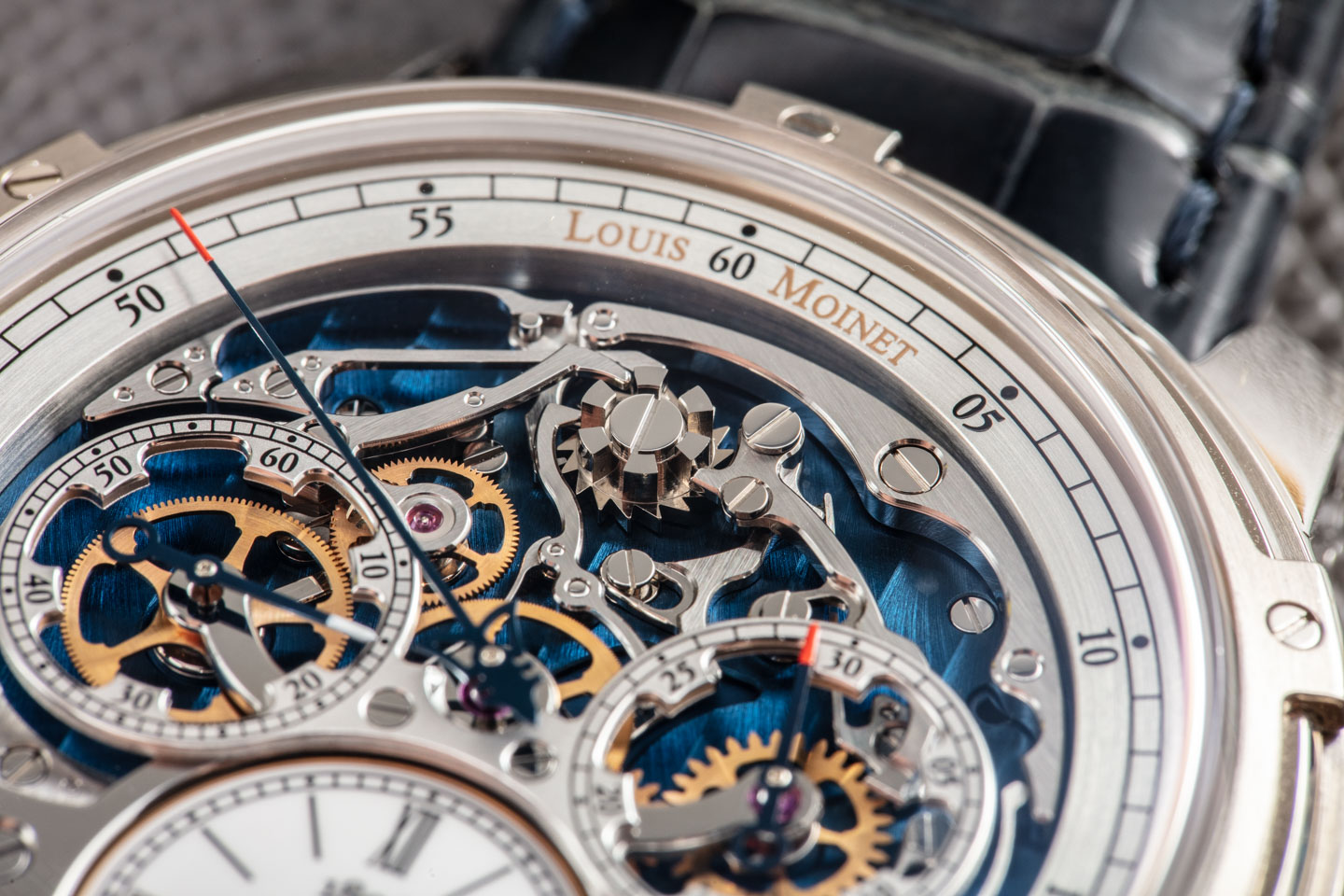 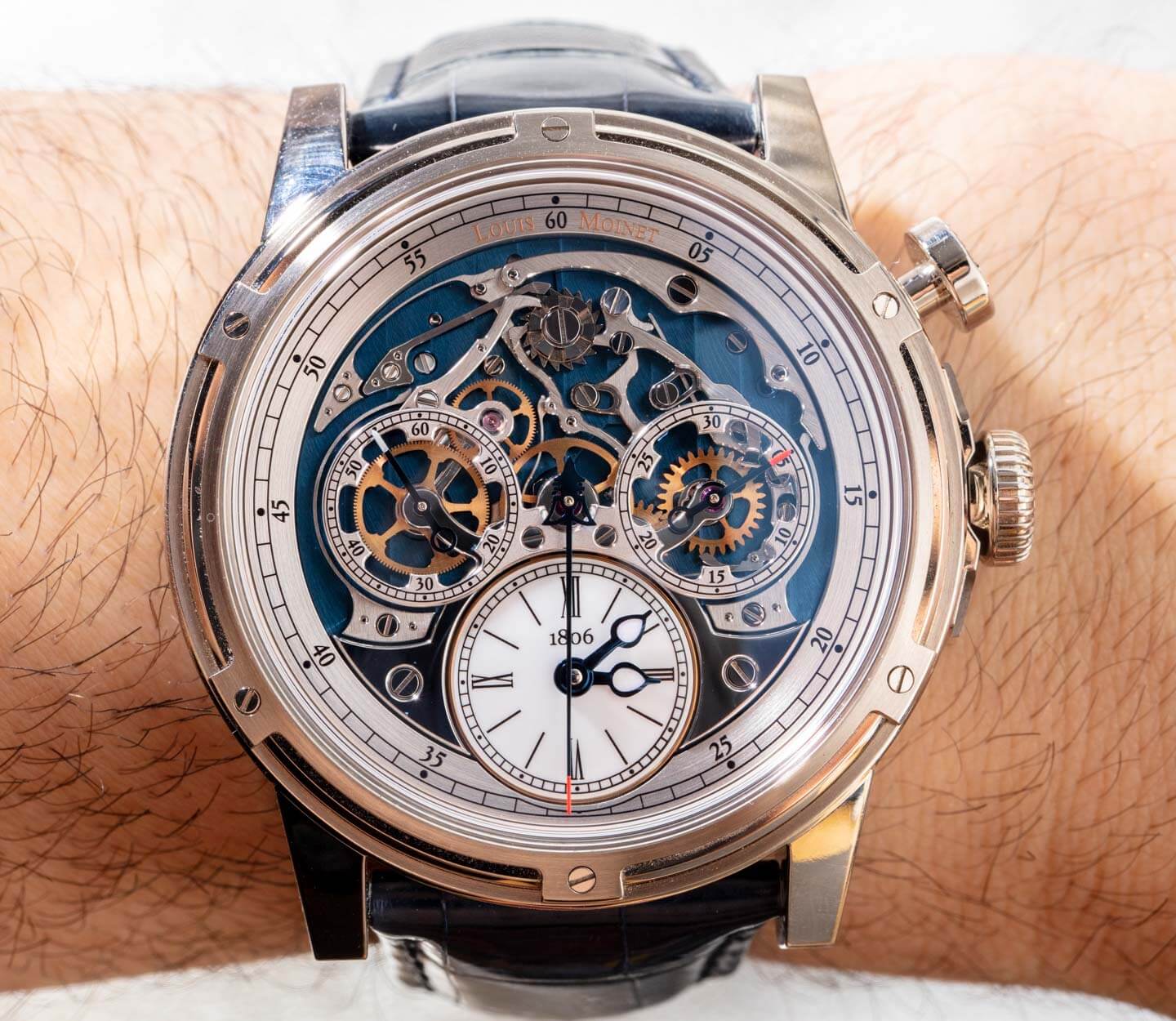 Imagine for yourself that you are running the modern incarnation of a brand from a watchmaker who lived in the 1700s and 1800s — and suddenly you learn a new piece of history that is potentially a game-changer. The world of wristwatch prestige is often made up chronologically, such as who did something first or who is the oldest. As vacant as some historic achievements are in their relation to current brand competency, the emotional value of such accolades is huge — and Louis Moinet had the good fortune to jump into their lap. The Louis Moinet Memoris chronograph watch is the product that resulted from the scenario. Here is its brief story.

A few years into his tenure as manager of Louis Moinet, Jean-Marie Schaller learned not only that the namesake of his company was more than likely the actual inventor of the chronograph (full story from Louis Moinet here), but also that such a device was available for sale. On behalf of the Louis Moinet brand, Mr. Schaller purchased the 1816 Louis Moinet chronograph pocket watch and holds it high upon a mantle where it can be admired by the world seeking to invest in traditional luxury watch brands with “legitimacy.” What incredibly fortune for Louis Moinet of today, indeed.

The Louis Moinet brand itself is actually not particularly prolific when it comes to producing chronographs. That is somewhat ironic given that they have this massively interesting chronograph creation story as part of their collective brand history. It adds fascination to the aura and life of Mr. Moinet himself, and it gives the brand broad flexibility to interpret that legacy in multiple ways, over many years. At this time, Louis Moinet has honored its history of inventing a chronograph with the Memoris watch collection, an example of which I am reviewing today. While not a direct analog to the pocket-style watch from the early 19th century that preceded it, the watch is certainly inspired by the dial and layout of the piece unique from 1816.

When Louis Moinet as a brand came back into existence, some of its early watches celebrated Jules Verne, also a French creative who came after Mr. Moinet, but who seemed inspired by a century of French industrial innovation such as that devised by Louis Moinet himself. During his life, Moinet wrote a treatise of watchmaking with an aesthetic that anyone today would connect to the world of Jules Verne. In fact, the Louis Moinet Jules Verne II watch was the last chronograph from the brand that I reviewed 10 years ago. While the brand’s timepieces are much different in shape, that same Jules Verne/Steampunk ethos comes across in most of the current watch cases that house today’s Louis Moinet watches. 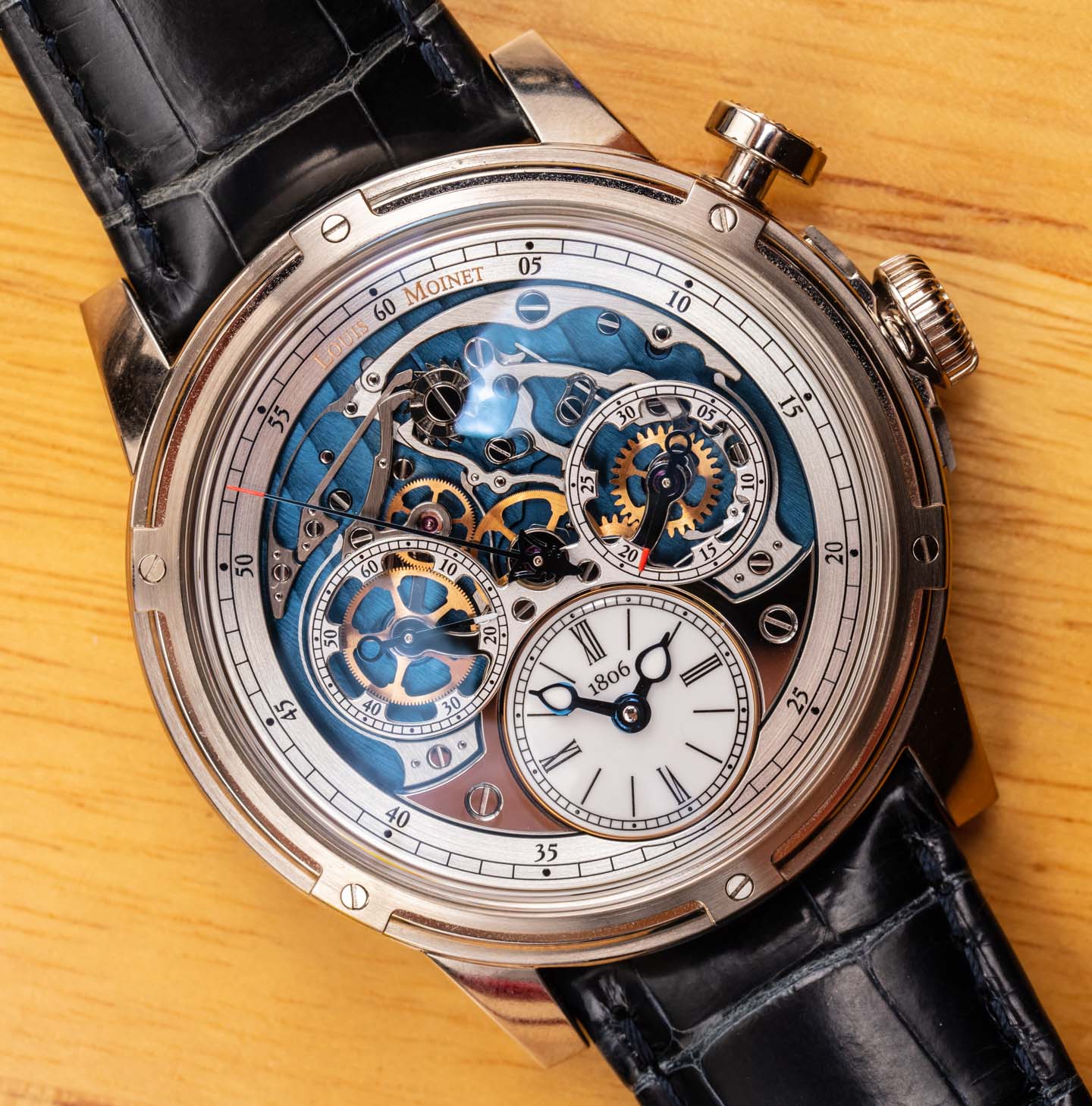 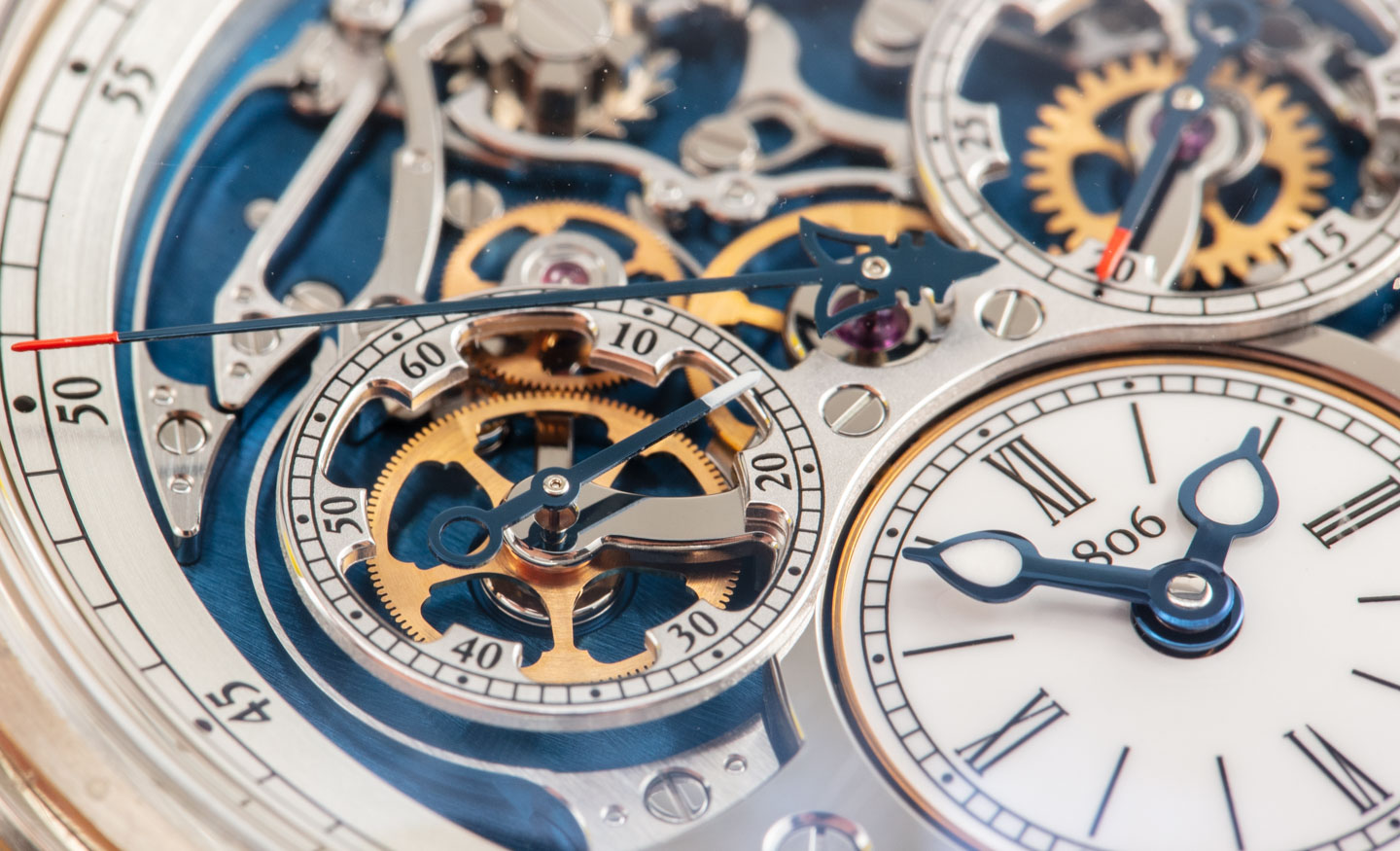 For the Memoris, Louis Moinet wanted to do something a little bit different when it comes to your standard chronograph timepiece (the market is full enough of them as it is). Louis Moinet opted to develop a movement module that put the chronograph complication elements front and center — and this is the first time I’ve seen a chronograph execution quite like this. The chronograph itself is rather simple and straightforward. It is a mono-pusher 30-minute chronograph with a traditional horizontal clutch and a column-wheel transmission. The mono-pusher (which cycles through, start, stop, and reset) is designed to be easy to press and is located at 2 o’clock on the case. Its position relative to the crown is inspired by the 1816 piece.

The special part is how you can see the chronograph movement parts right through much of the dial as part of the Louis Moinet caliber LM54 automatic mechanism. The movement itself is a nicely decorated 4Hz automatic that has 48 hours of power reserve and is comprised of 302 parts. Louis Moinet has thus far produced a few versions of the Memoris with the front-dial movement finishing being slightly different across the range. For this model (reference LM-54.70.80B in the 18k white gold case), the dial is antique silver-tone for most of the registers, enamel white for the dial, and PVD blue-coated for the rear movement plate. If you inspect other Louis Moinet Memoris watches, you’ll see how the brand has created a worthy assortment of styles to choose from. While all the Memoris watches are seemingly part of limited editions, Louis Moinet has even more limited-edition versions with highly exotic looks such as Memoris “Scarab” or Memoris “Blue Gibeon.” 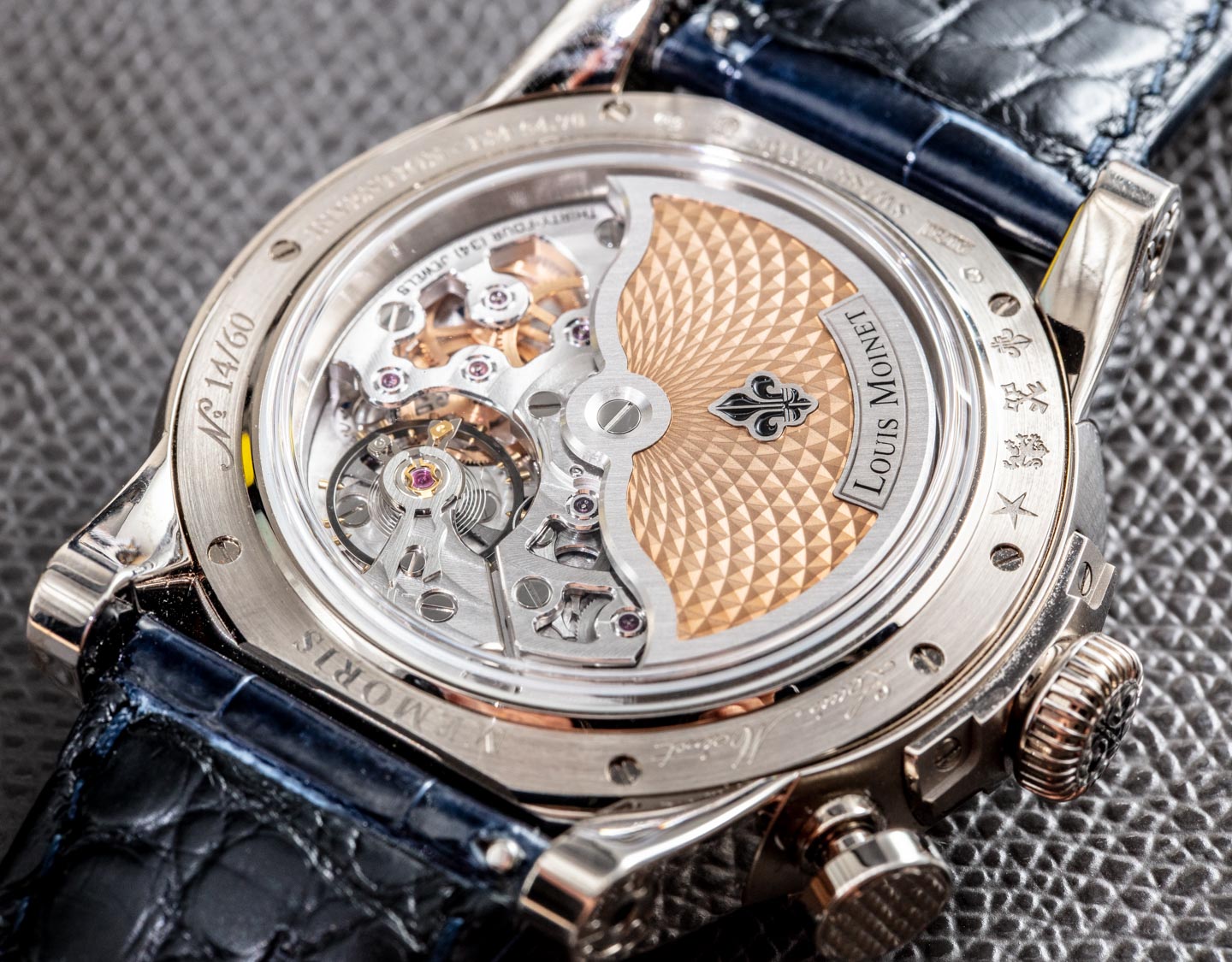 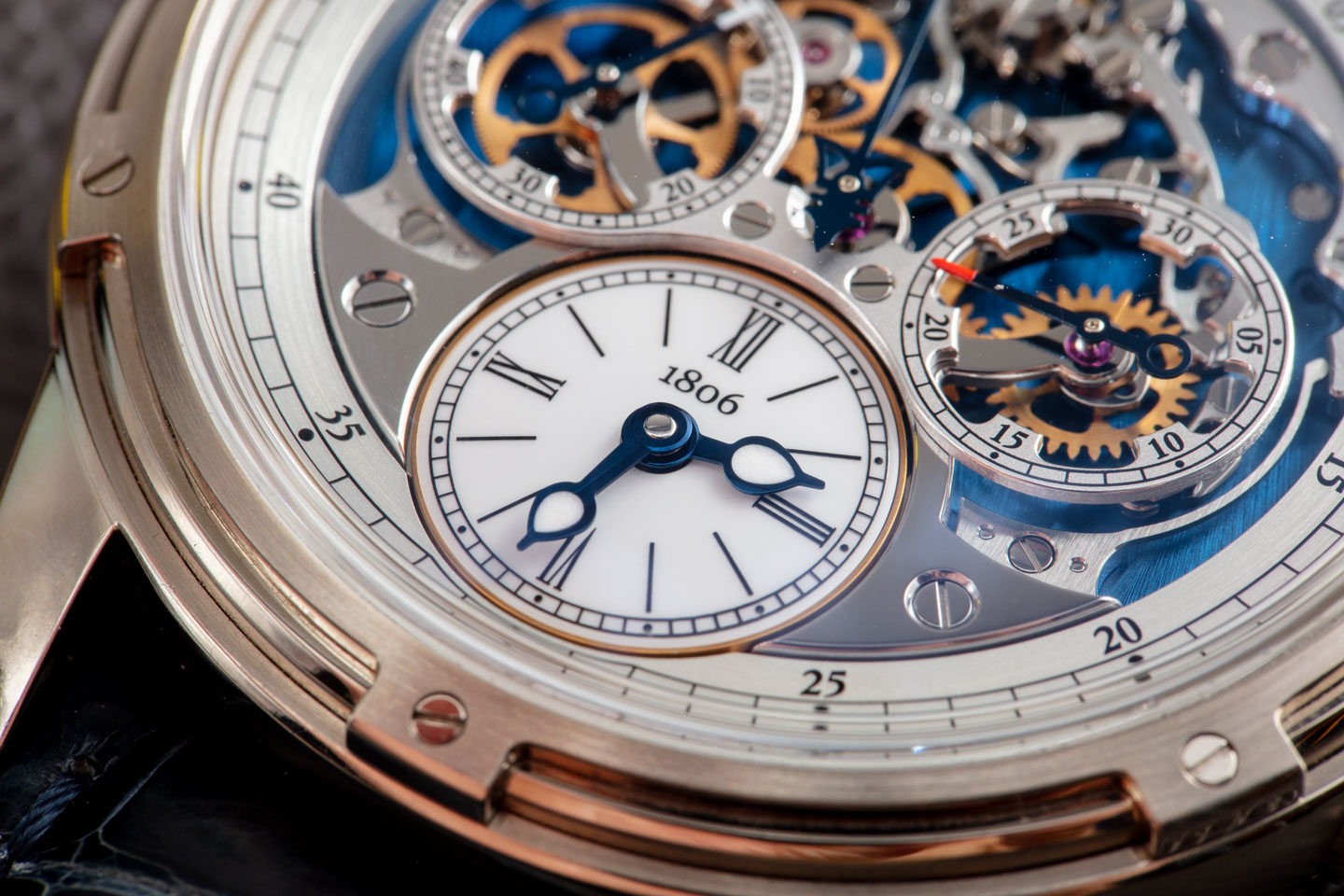 Logically, it might be the case that the smaller dial to read the time is hard to see, but in reality it isn’t that bad. The attractive hands (painted with luminant) are easy to spot in their blue tone over the white dial. Contrast is high and thus reading the time isn’t a challenge. The chronograph is a bit more challenging to read due to the inherent distraction by the skeletonized dial elements, but ultimately the matte-painted tips of the hands and full scales allow for easy and precise reading of the chronograph registers.

On the wrist, the Memoris wears big, because it is big. That is part of the entire theme of the brand. Louis Moinet makes traditional watches with American sensibilities. No, it isn’t an American brand, but it seemingly embraced our American love of big sizes, bold presentations, and emotive stories. Louis Moinet watches seem most appropriate for true bon vivants who wish to show off their culture and sumptuous taste right on their wrist. Louis Moinet watches are in that sense flashy, but in a more genteel way as compared to the “bling-bling” culture which is ever-present today. 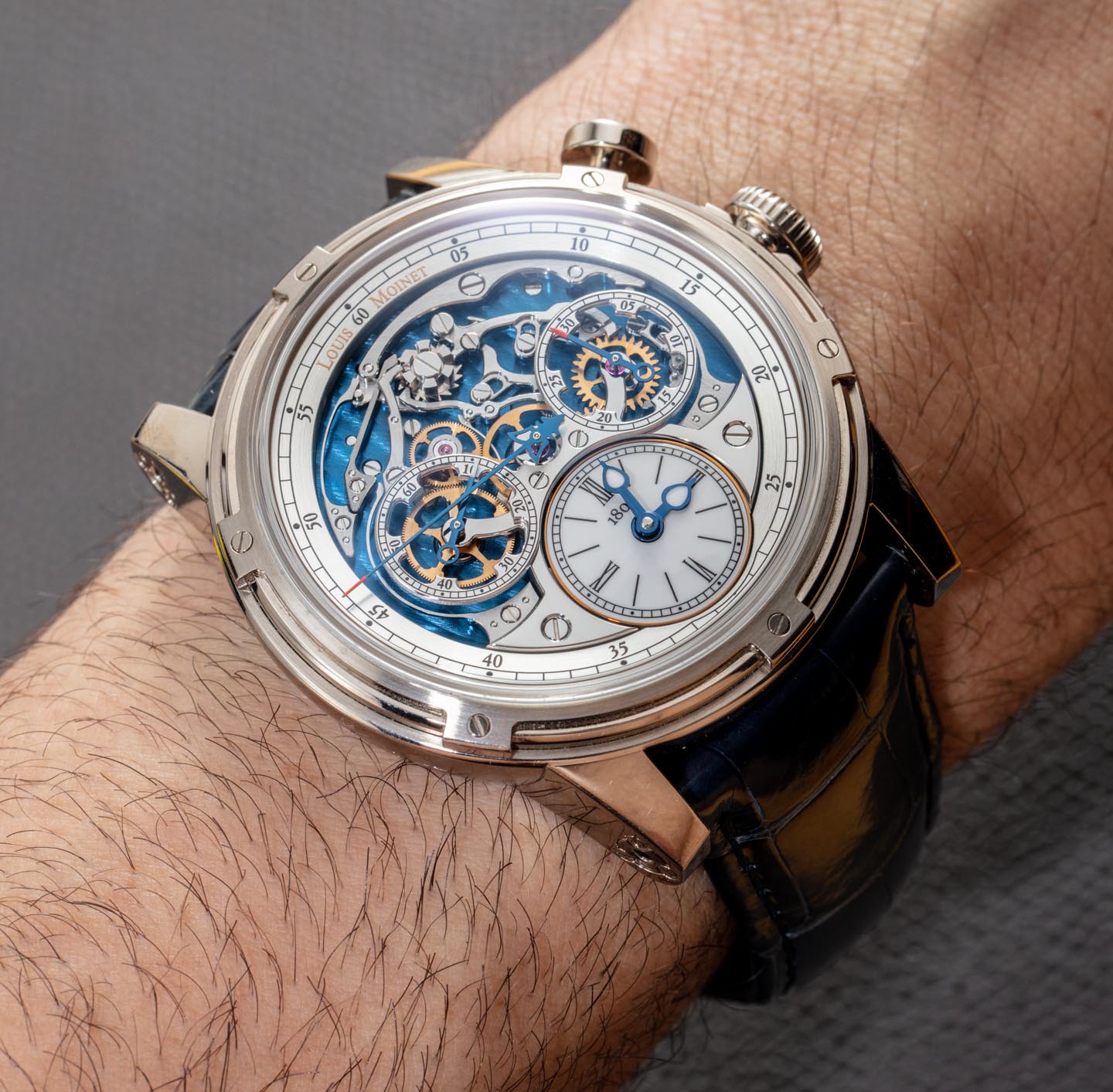 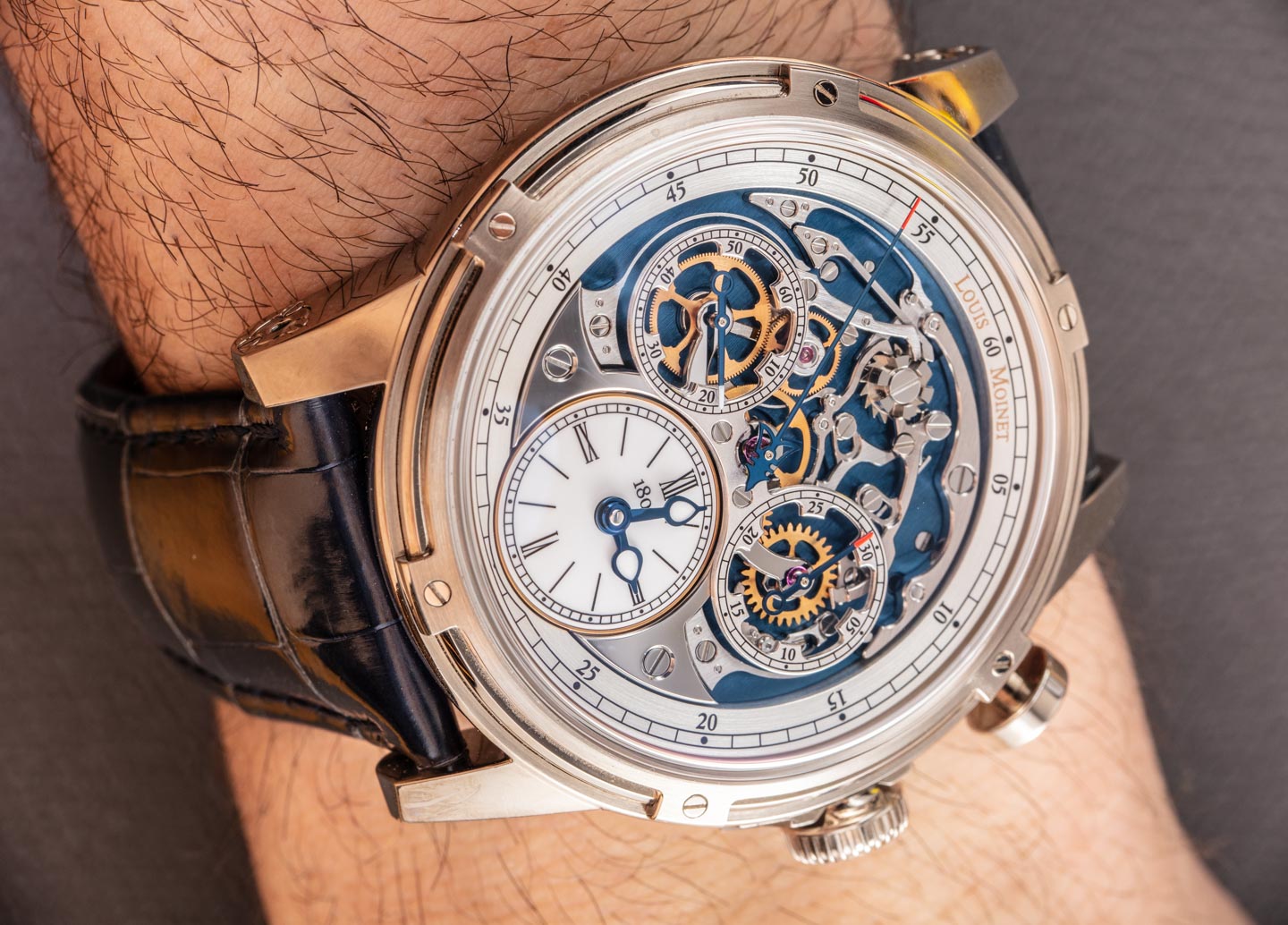 I actually couldn’t find the Memoris watch size on the Louis Moinet website. Perhaps they find that people get “size shock” when reading it. That watch isn’t that big, to be honest. The case is about 46mm wide, about 18mm thick, and has a roughly 53mm lug-to-lug distance. Is has a domed AR-coated sapphire crystal over the dial and other flat sapphire crystal over the movement as a window on the rear of the case. Attached to the watch is a high-quality blue alligator strap. Wearing comfort is decent, but this is a larger watch. I like the Louis Moinet fleur-de-lys-style logo buckle, but I think that the watch would wear a bit more comfortably on a traditional ardillon-style buckle.

Louis Moinet continues to get high marks from me for creativity and visual presentation. They aren’t a tool watch brand nor are they going for anything mainstream in their products. The brand has been proudly selling to avant-garde clientele for a number of years now. That won’t change, though it is interesting to see where Louis Moinet is truly advancing horological art — something that the Memoris can truly be considered. It goes well with the brand’s authentic history, and it offers a novel take on one of the world’s most popular mechanical watch complications. This 18k white gold (the watch is also available in titanium) Memoris reference LM-54.70 (LM-54.70-80B) is part of a limited edition of 60 pieces and has a retail price of $59,900 USD. Learn more at the Louis Moinet website here.

Necessary Data
>Brand: Louis Moinet
>Model: Memoris 18k white gold (reference LM-54.70-80B as reviewed)
>Price: $59,900 USD
>Size: ~46mm wide, ~18mm thick, and ~53mm lug-to-lug distance.
>When reviewer would personally wear it: When wanting to stand out in a room full of men wearing brightly colored, auspicious jackets.
>Friend we’d recommend it to first: Seasoned luxury and service connoisseur who likes bold looks and deliciously obscure brands.
>Best characteristic of watch: Manages the difficult task of offering something new while also celebrating Louis Moinet brand heritage. Genuinely cool-looking product that is nicely finished with a dramatic display.
>Worst characteristic of watch: For a watch that celebrates the chronograph, the subdials hands could be a bit easier to see. Offering a smaller 40-42mm wide case size as a companion model would open up the Memoris to a much larger audience.